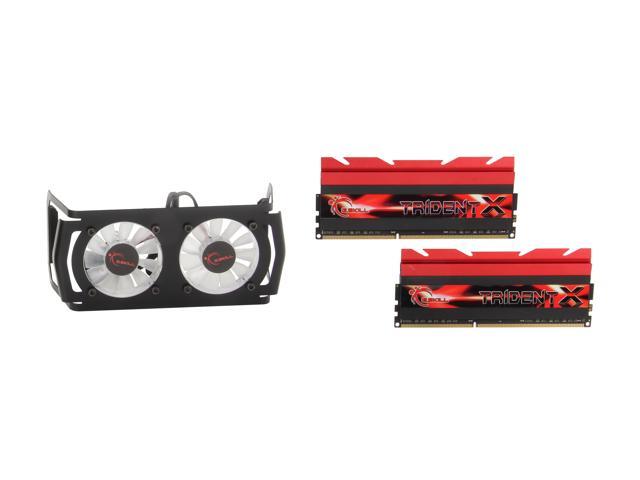 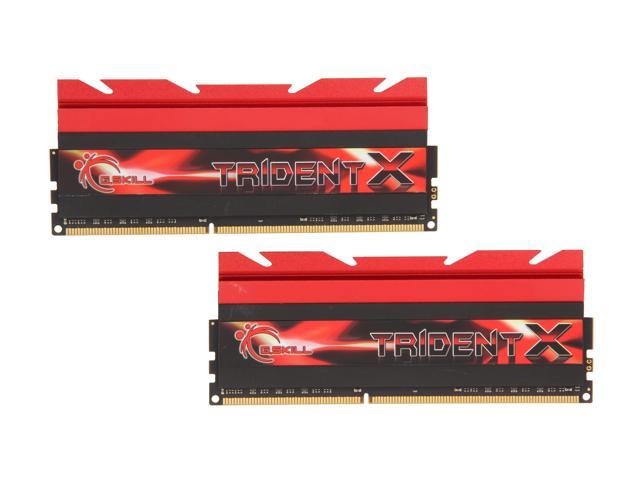 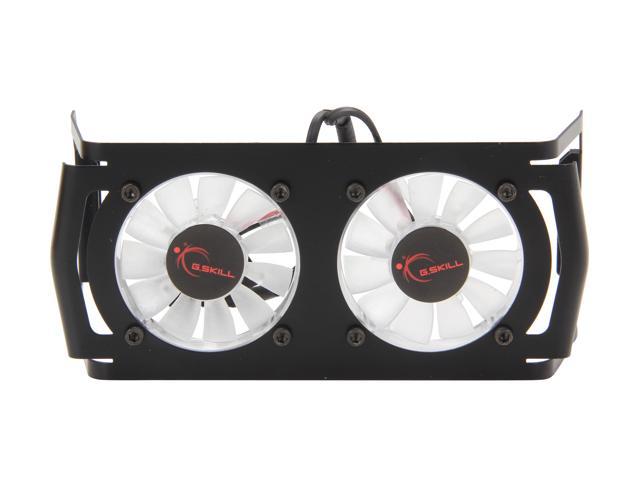 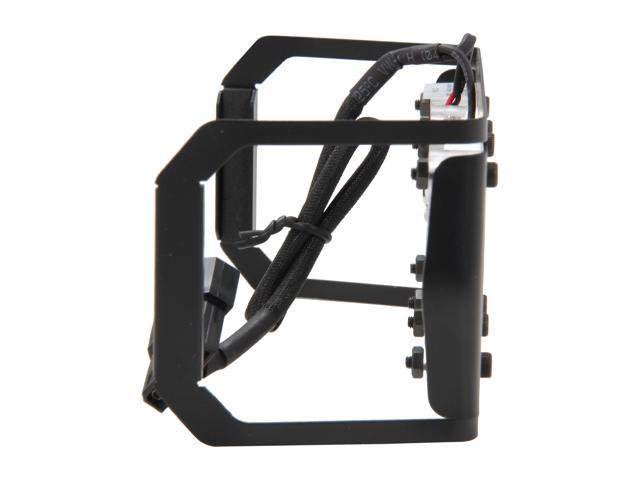 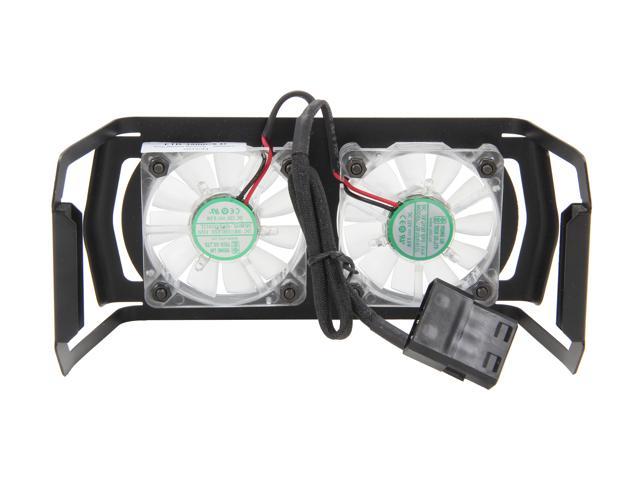 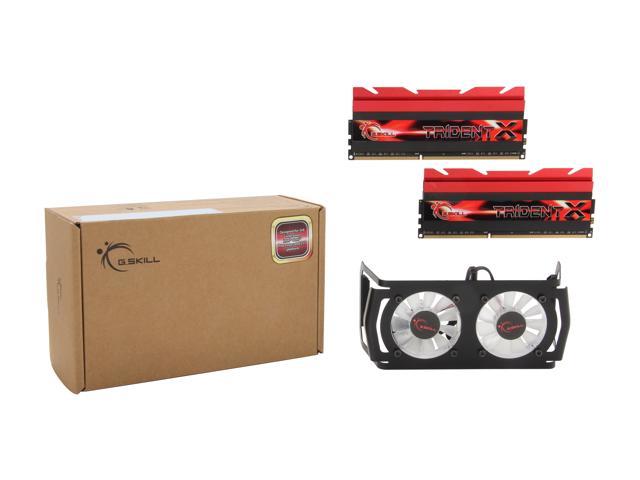 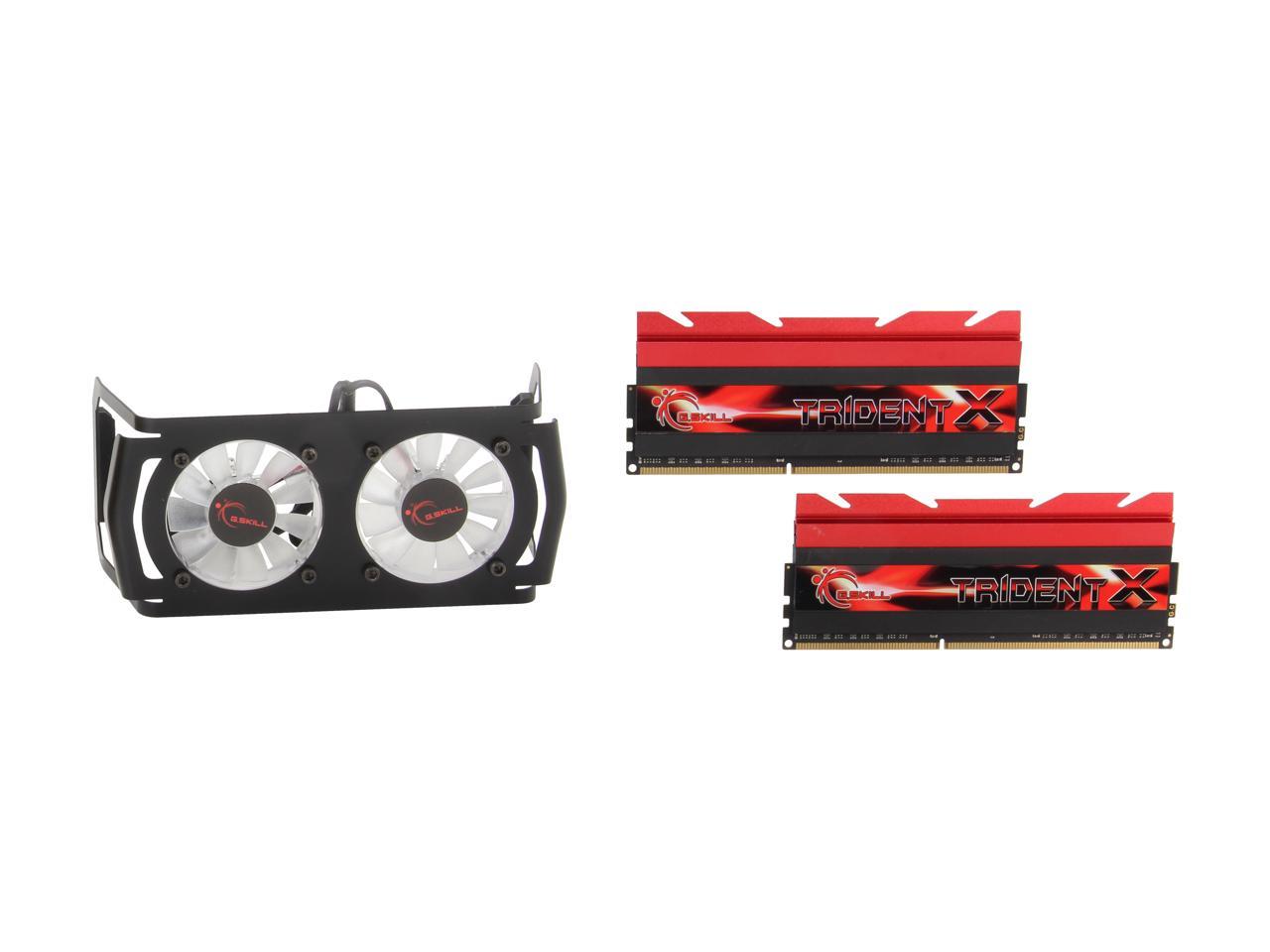 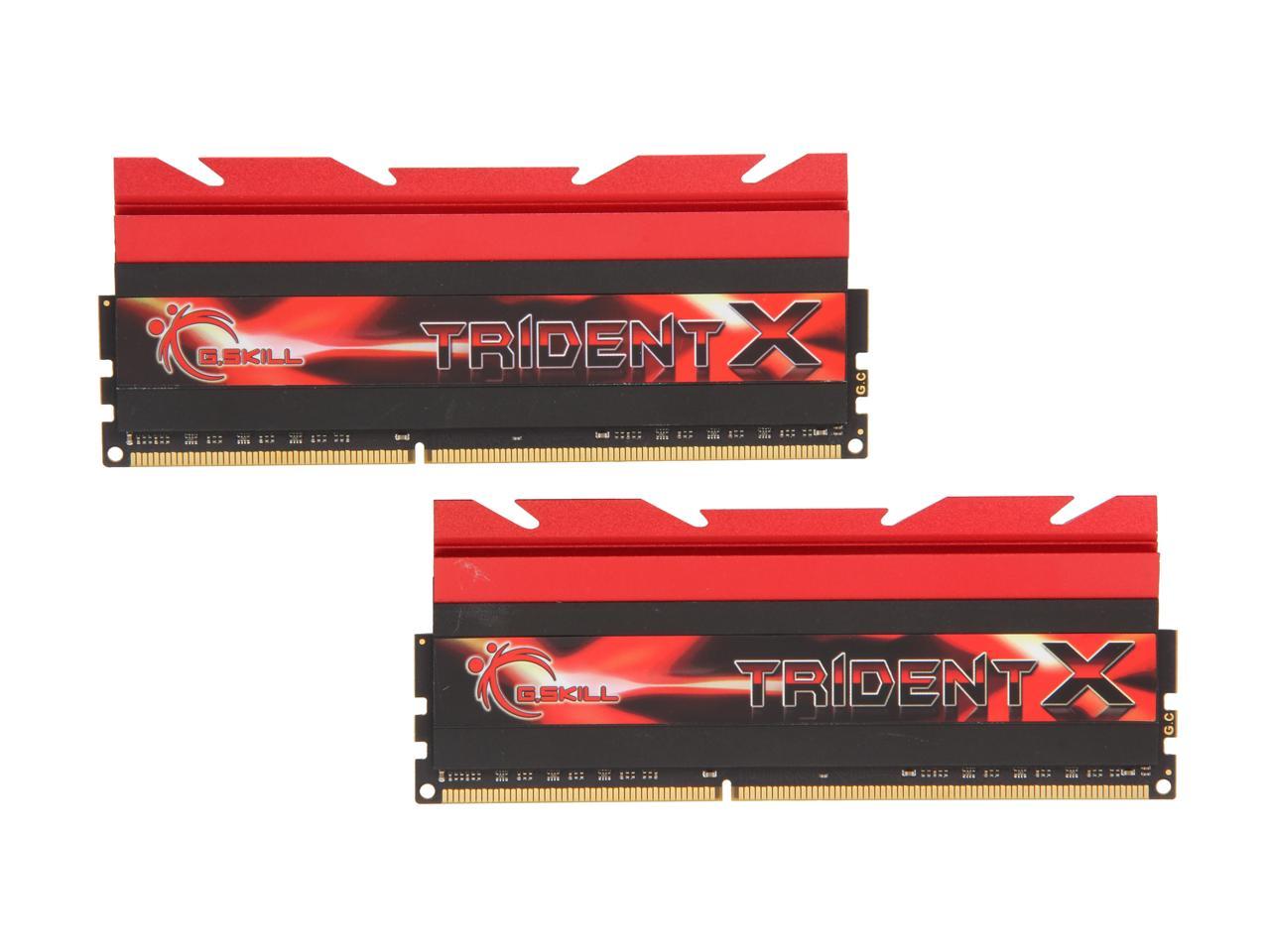 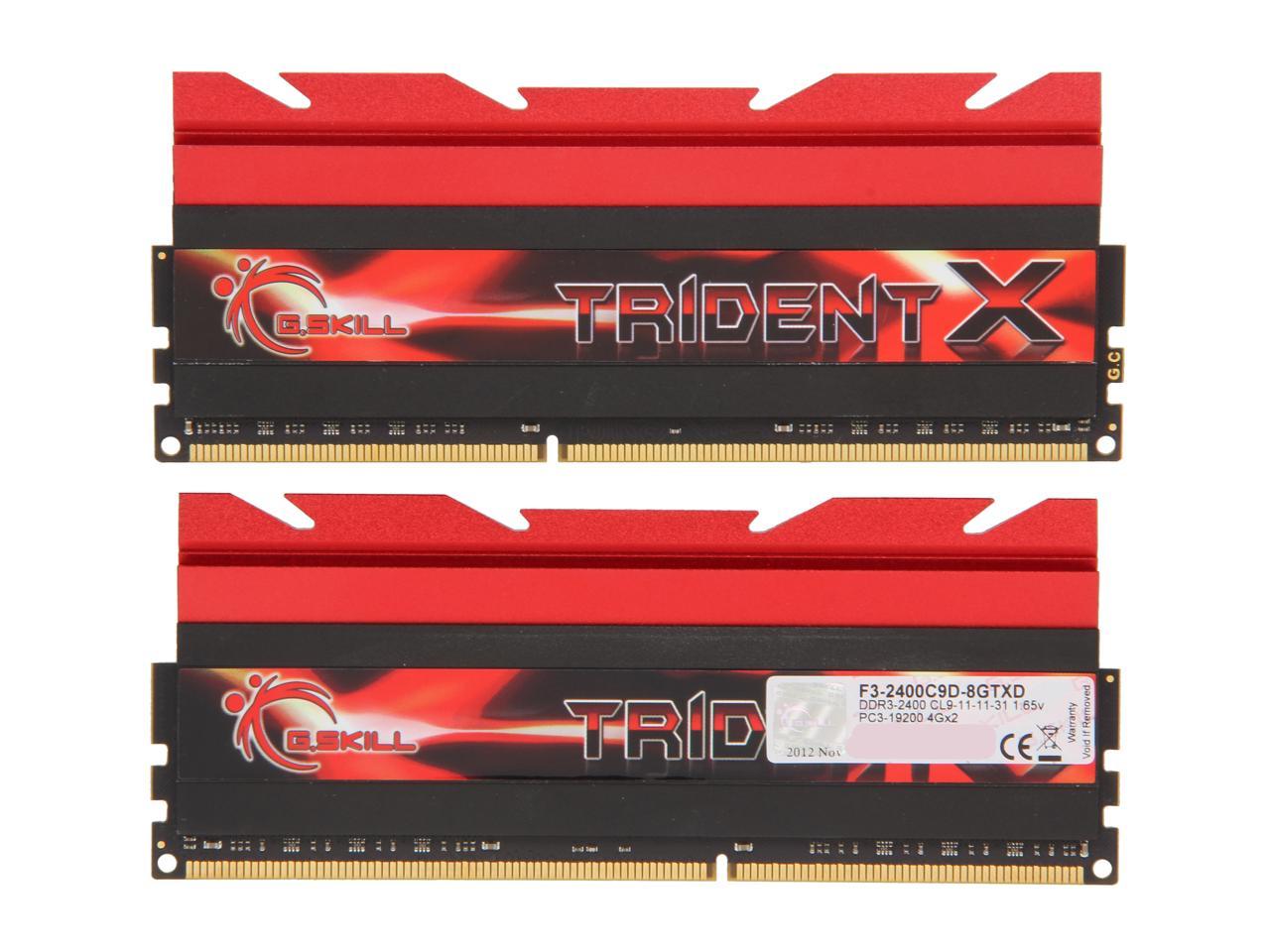 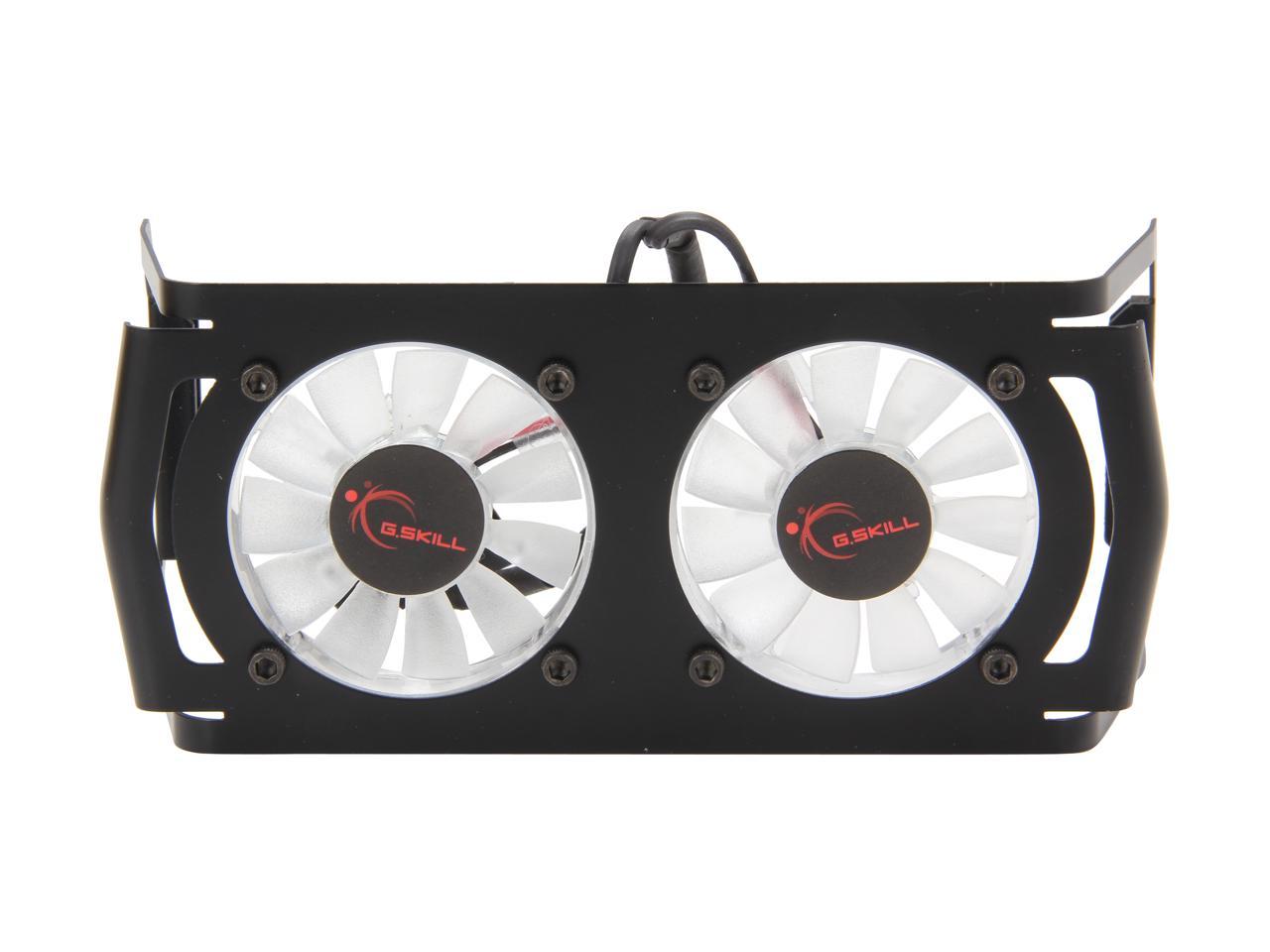 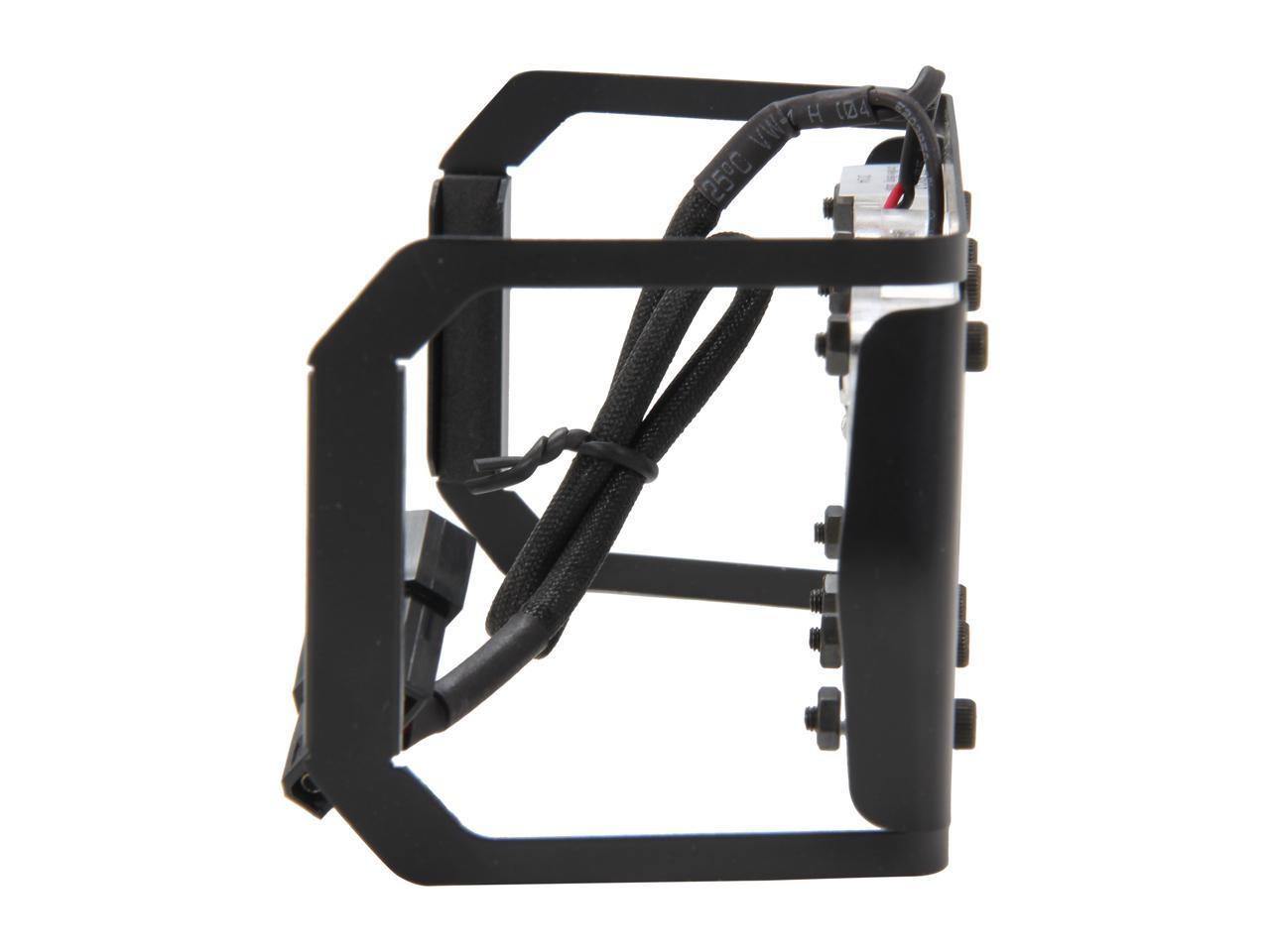 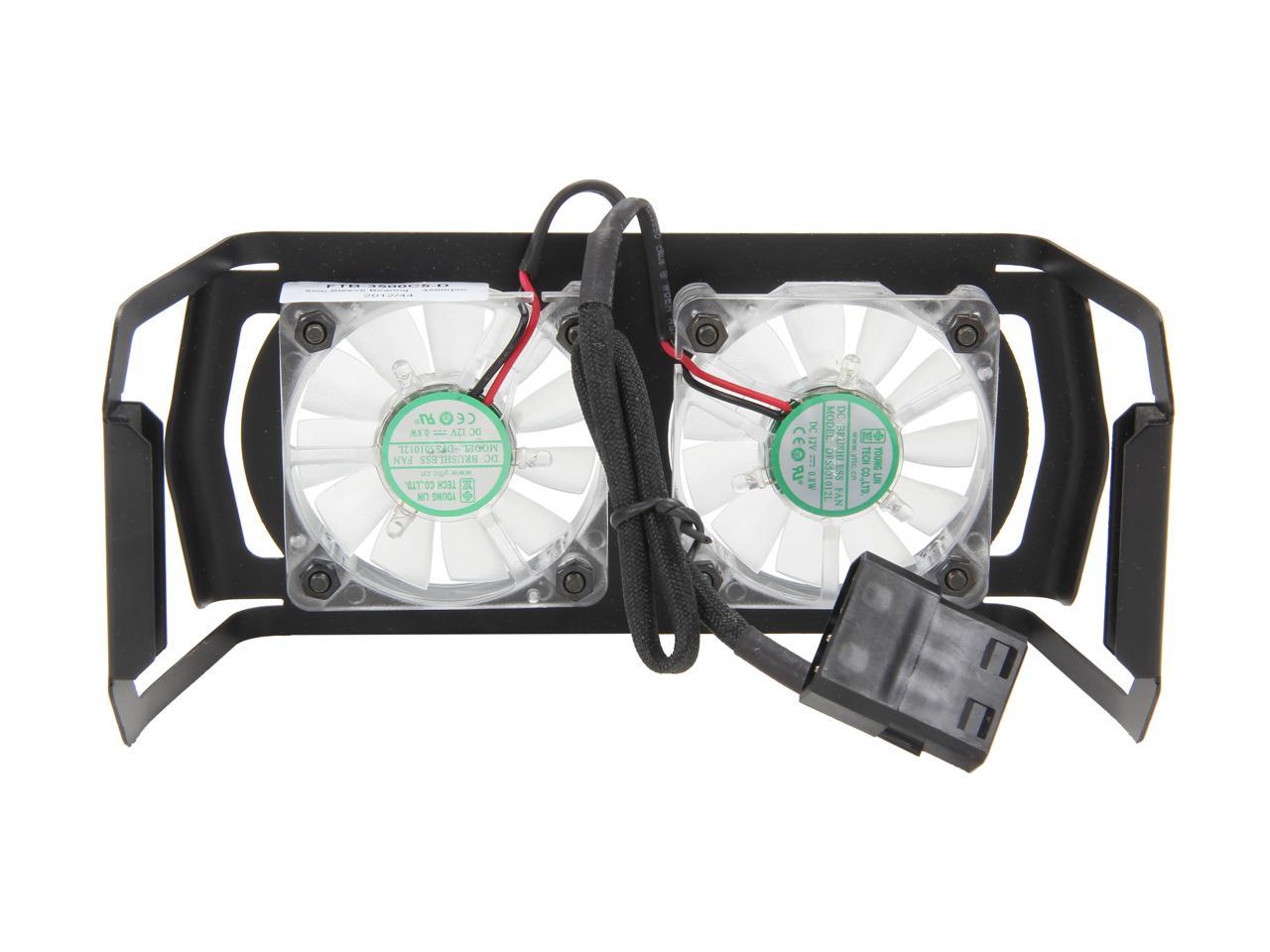 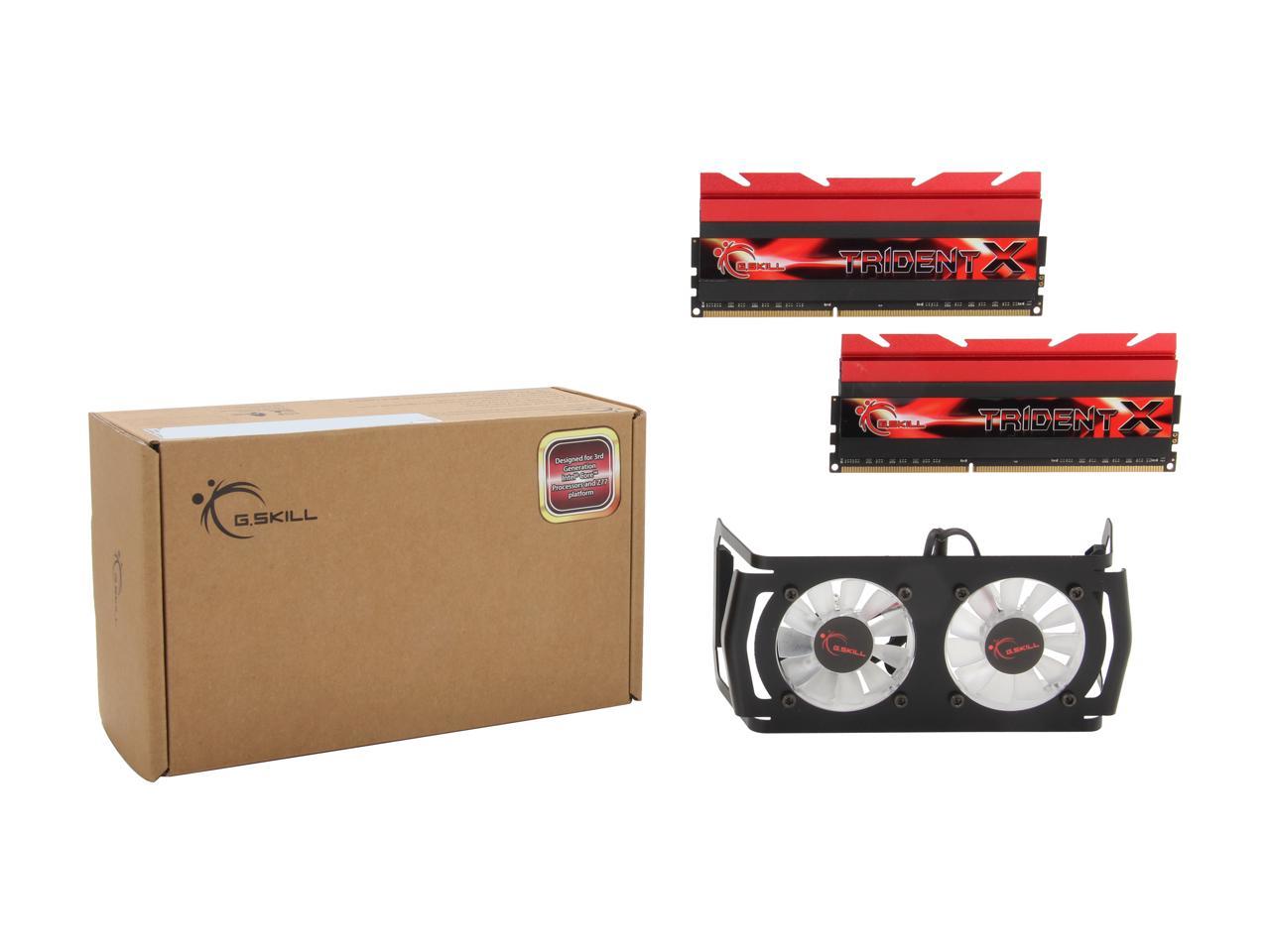 
Overview
It's Not the Fastest Until It's TridentX!
Memory Frequency World Record at DDR3 4404MHz Breaking the highest DDR3 speed world record at a staggering 4404MHz in 2013, G.SKILL TridentX series is known as the world's most powerful and fastest DDR3 memory available on the market. Named after the powerful weapon of Poseidon, Greek God of the Seas, G.SKILL TridentX is imbued with extreme overclocking capabilities waiting to be unleashed in your system.
Removable Heat Spreader Fin
The G.SKILL TridentX series features a removable heat spreader fin to improve your cooling options. With the heat spreader fin, the increased surface area keeps the memory cooler. Alternatively, with a system that already has a sufficient cooling solution, the fins can be removed to accommodate massive CPU coolers or other customized cooling solutions.

G.SKILL TridentX heat-spreader comes with removable top fin design. It allows overclocking enthusiasts to have more flexible options of memory cooling systems, as well as to reduce the height to fit with large CPU coolers. All G.SKILL memory products come with a lifetime warranty and the G.SKILL technical team is always ready to provide consumers with complete technical support via online forums, telephone, and email.
Video
Awards

Editor's Choice at Techpowerup
If you follow my posts on the forums, you'll find that I consider myself one of Corsair's biggest fans, but those feelings were thrown completely out of whack when I received this kit from G.Skill. The G.Skill F3-2666C11Q-16GTXD kit managed to completely amaze me with its quality and clocking ability, and I fell in love after checking its price. You cannot find a 4X 4GB 2666MHz kit for less right now unless it's been put on sale. This kit manages to overcome any performance deficiencies with flexibility and great overhead. At stock, I managed to beat out my trusty Corsair Dominator Platinum kit with a little bit of tweaking. Overclocked, the G.Skill F3-2666C11Q-16GTXD kit managed to go just as high without a boost in voltage. That is just outright fantastic.

Editor's Choice at Neoseeker
G. Skill's 2400MHz TridentX kit put on an impressive display of performance, easily overcoming the competition in all but four of the benchmarks used. Unfortunately the memory was bottlenecked by the processor, limiting the overclock to a 104 bclk and leaving us with a final overclock of 2218MHz and timings of 10-12-12-31 2T. Paired with a 3rd generation Intel processor, G. Skill's 2400MHz Trident X kit would have benefited greatly from the increased bandwidth and has the potential to hit 2500MHz with some fine tuning.

Gold Award at OverClockersClub
G.Skill's Trident X line-up comes with kits that range from the 2400MHz kit we are looking at to a 2800MHz kit for massive memory speeds and the associated bandwidth that is a hallmark of higher speed bins. It seems that G.Skill is most definitely targeting the budget overclocker with this set of Trident X modules. A $99 price tag for 2400MHz-rated modules is a welcome sight after seeing huge price tags just a few months back for cas8 and 9 modules binned above 2133MHz. The Trident X are modules that perform well and deliver some overhead for a little bit more tweaking and come with G.Skill's lifetime warranty. Excellent looks aside, the Trident X would make a good addition to any system and have the flexibility to be cooled in multiple ways.

Pros: I was thinking about going with Corsair first, as you usually cannot go wrong with Corsair when it comes to memory (placing costs aside) -- but I decided to try out G.Skill. They don't look as nice as a set of Corsair sticks, but the performance is all there. I haven't tried to overclock them and I don't have any intentions to; I was looking for a reliable pair of dual-channel memory sticks running at 2400MHz with a CAS 9 latency, and that is exactly what I received (with a little bonus). I don't have an infrared thermometer, but it would be my guess that they run a few degrees celcius cooler with the fans (that's a ~$15 bonus). The fans aren't that loud either (though I actually cut the power connector, soldered a 3 pin connector, and connected it to my motherboard to control the fan speed). -2400MHz -CAS 9 -Command Rate 1 (Manually) -Running at 9-11-11-11 (Memtest and Prime tested) on a MSI MPower Motherboard -BOINC seems to be enjoying them as well. -Nice little fan included. -XMP profile loads up with advertised timings. -Lifetime warranty from a reputable company.

Cons: I was looking for a set with different colored heat spreaders, but the only other option was buying a quad set. The top fins don't come off as easily as I thought, though I don't really care that much about it anymore as I don't have a clear window on my case -- it just comes down to the performance and reliability in my case. I might give it another try sometime in the future.

Overall Review: Would be nice if they gave you the option to buy different colored top fins. I think that's about it?

Pros: Low CAS latency. I was able to take the RAM up to 2400 easily. For how fast this RAM is rated to run and having a CAS latency of 9, very good.

Cons: None that I've seen so far, but I've only had these two dimms for a couple days. I've always bought g.skill however and have never had a problem with any of the RAM I've bought from them.

Overall Review: It comes with a kind of dinky little RAM fan. It didn't really fit well in my system because I only have 2 dimms, so I gave it to my little brother because he has triple channel ram and it fit MUCH better in his system, the RAM fan is cool but IMO kind of a more aesthetic choice, but I must admit it does make my brother's system look cooler (he has a windowed side panel). His only wish was that the led was blue instead of white, or at least red. As for the build quality of the fan, it seems sturdy enough, it's designed for you to bend the metal so it clamps on.

Overall Review: I will be honest, I bought these to go with my red and black theme and because they were 9cl instead of the typical 10 at this freq. I did't put the fan on. I don't think it is necessary and I'd rather look at these dimms over a fan.

Manufacturer Response:
. Dear Customer Thank you for your G.Skill purchase and review. Glad to hear you like the appearance of the memory. The G.Skill Trident X series is a great design as the heat spreaders are perfect for overclocking. The heavy duty heat spreaders will allow the modules to be nice and cool even during extreme speeds upwards of DDR3-2400. You should be very pleased with this CL9 memory kit, especially with a good CPU and motherboard that can fully unleash the performance. For any further questions or concerns, please feel free to contact us directly. Thank you GSKILL SUPPORT Quality and customer service are our top priorities. Tech Support Email: ustech@gskillusa.com RMA Dept Email: rma@gskillusa.com G.Skill Forum: http://www.gskill.us/forum/
Joshua M.
Ownership: 1 day to 1 week
Verified Owner
Rock solid5/18/2014 5:57:17 PM

Cons: Minor qualm with the fan unit that comes with the memory. Doesn't fit with a Hyper 212 EVO push pull. Works fine with any liquid cooler, although its not really necessary because the memory stays cool by itself. Not worth knocking an egg off for, just something to think about.

Overall Review: Wouldn't hesitate to pair this with any Haswell based system, no problems paired with i7 4770k. Reaches rated speeds and even runs at 1T with XMP profile 2. Highly recommended

Pros: XMP profile worked like a charm with my no frills 4770, even changed it to 1T without a hitch..memtested great too

Cons: On my particular board the RAM loaded as undervolted (it however still was able to achieve decent frequency at that voltage !!)

Pros: Very fast ram with low latencies. I was able to run 2800 with 10-12-12-32 timings with 1.75v, though thats not a daily runable voltage I just did it for testing to see what they could do. With stock volts this ram will probably run 11-13-13-35 at 2800 speeds no problems, still very respectable timings for that speed and very overclockable ram.

Cons: Not that this is really a real con and certainly would never drop an egg for it but I was not able to achieve over 3000mhz no matter how much voltage or loose of timings I threw at it. I really only wanted to try it for bragging rights of running ram at 3000mhz lol.

Overall Review: Mostly only Haswell chips can run these kind of speeds without a large bump in the memory controller voltage (VTT) like you would have to do with Ivy and Sandy bridge chips. But my 4770k loves these sticks with a Gigabyte Z87x-UD4H board.