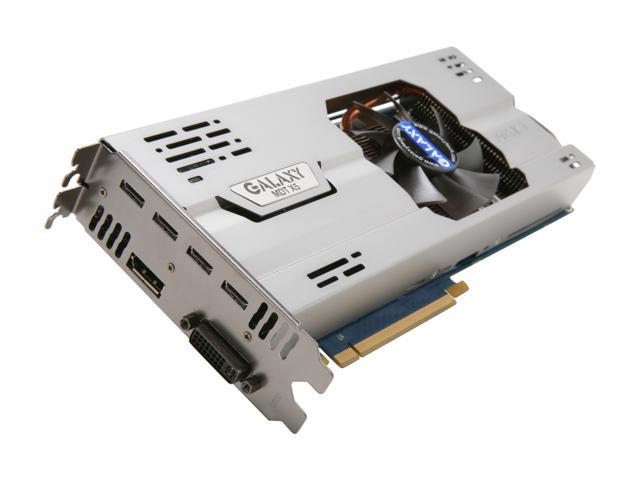 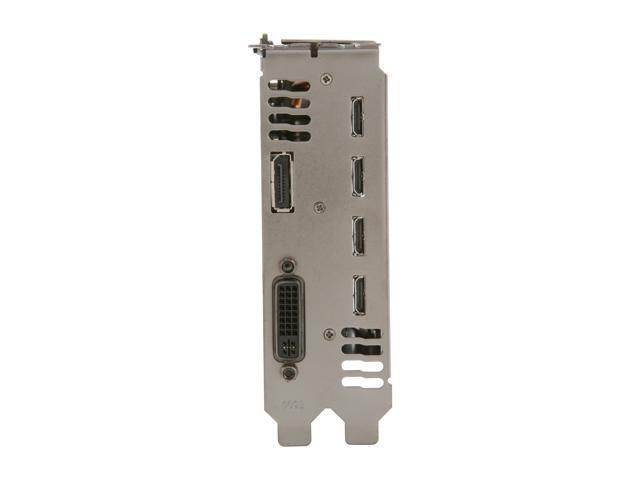 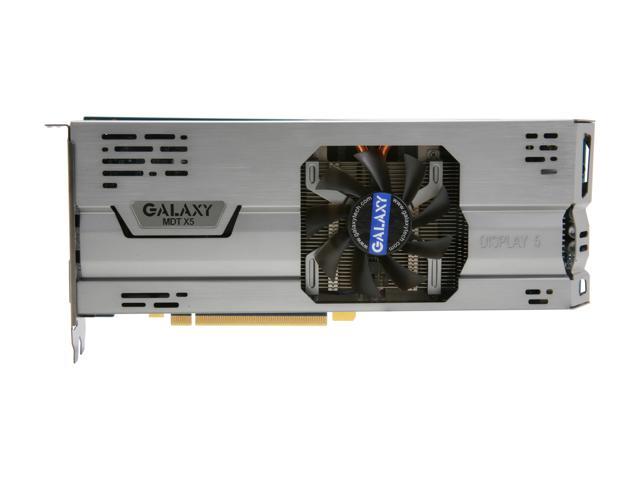 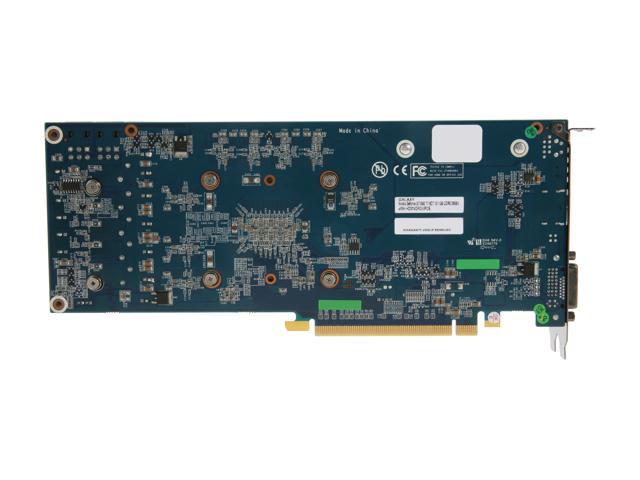 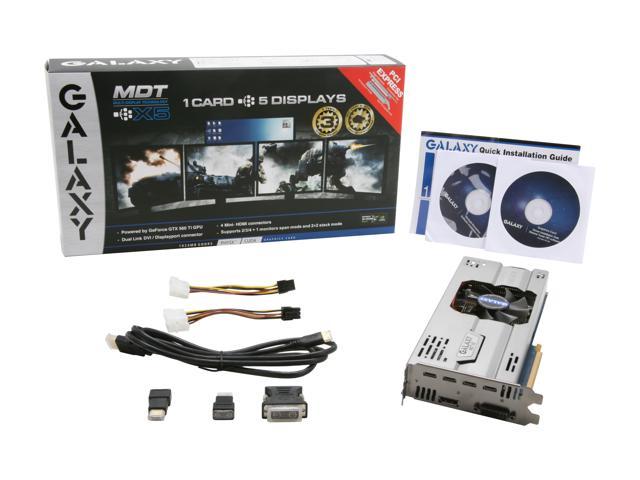 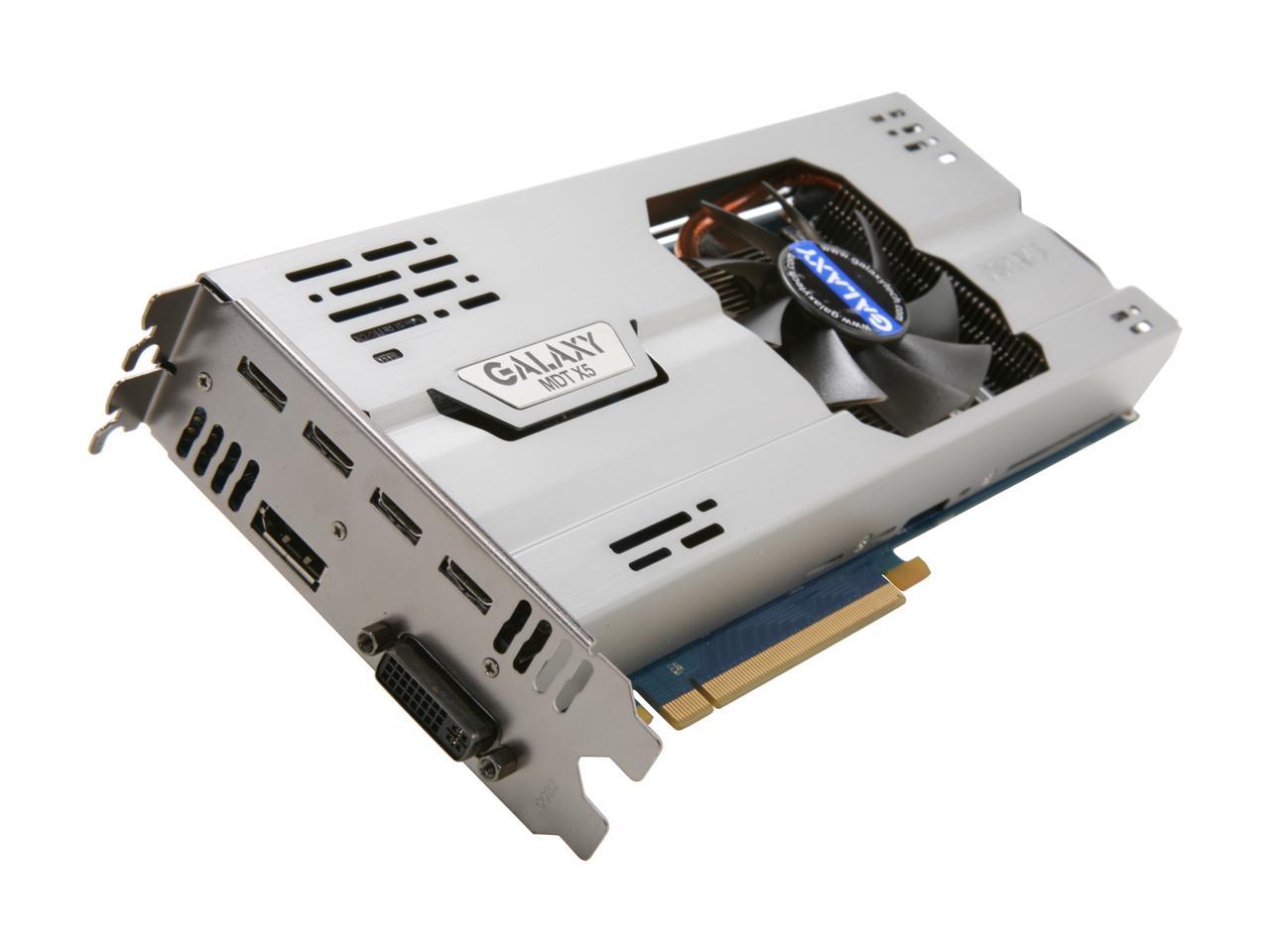 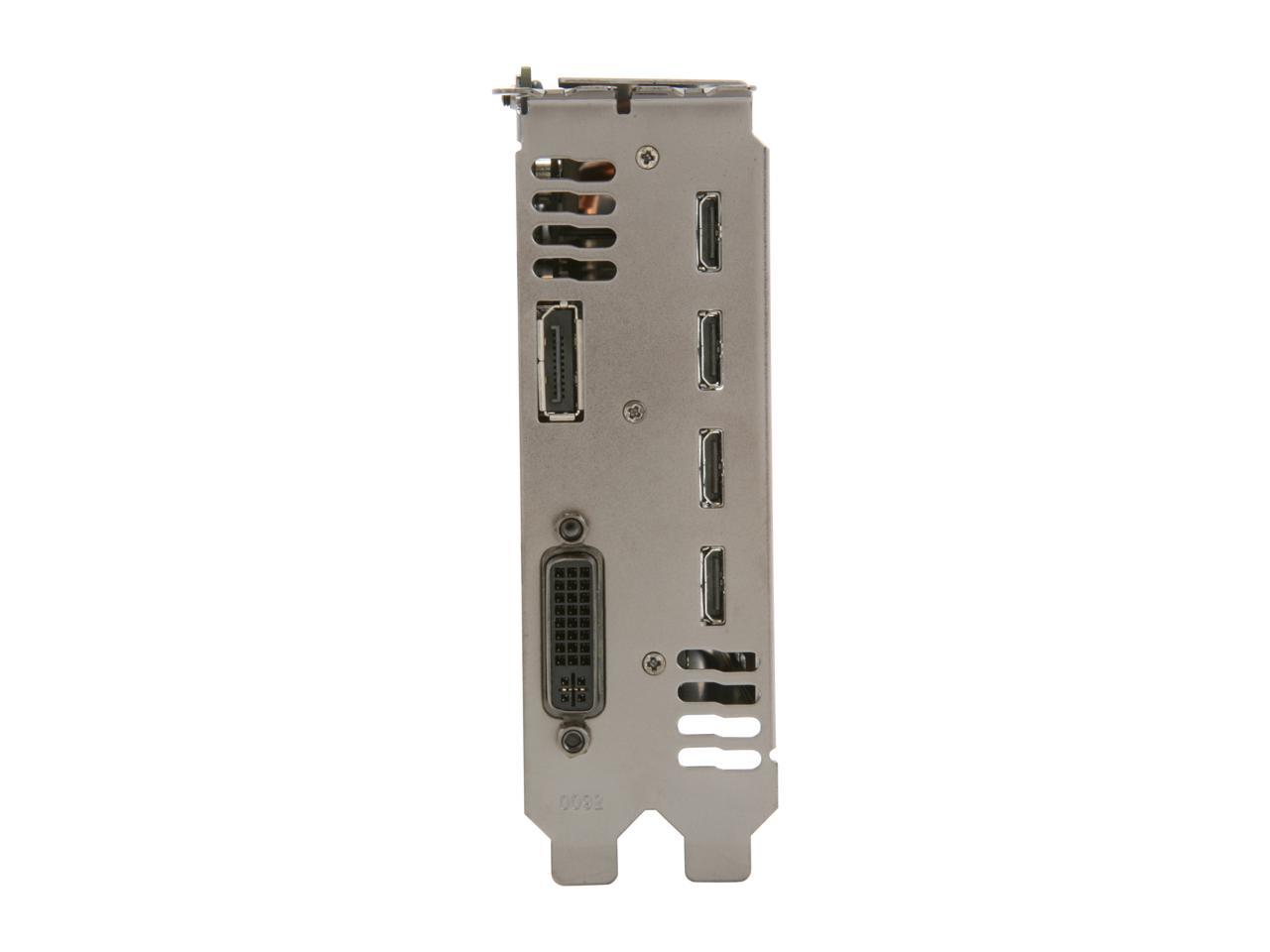 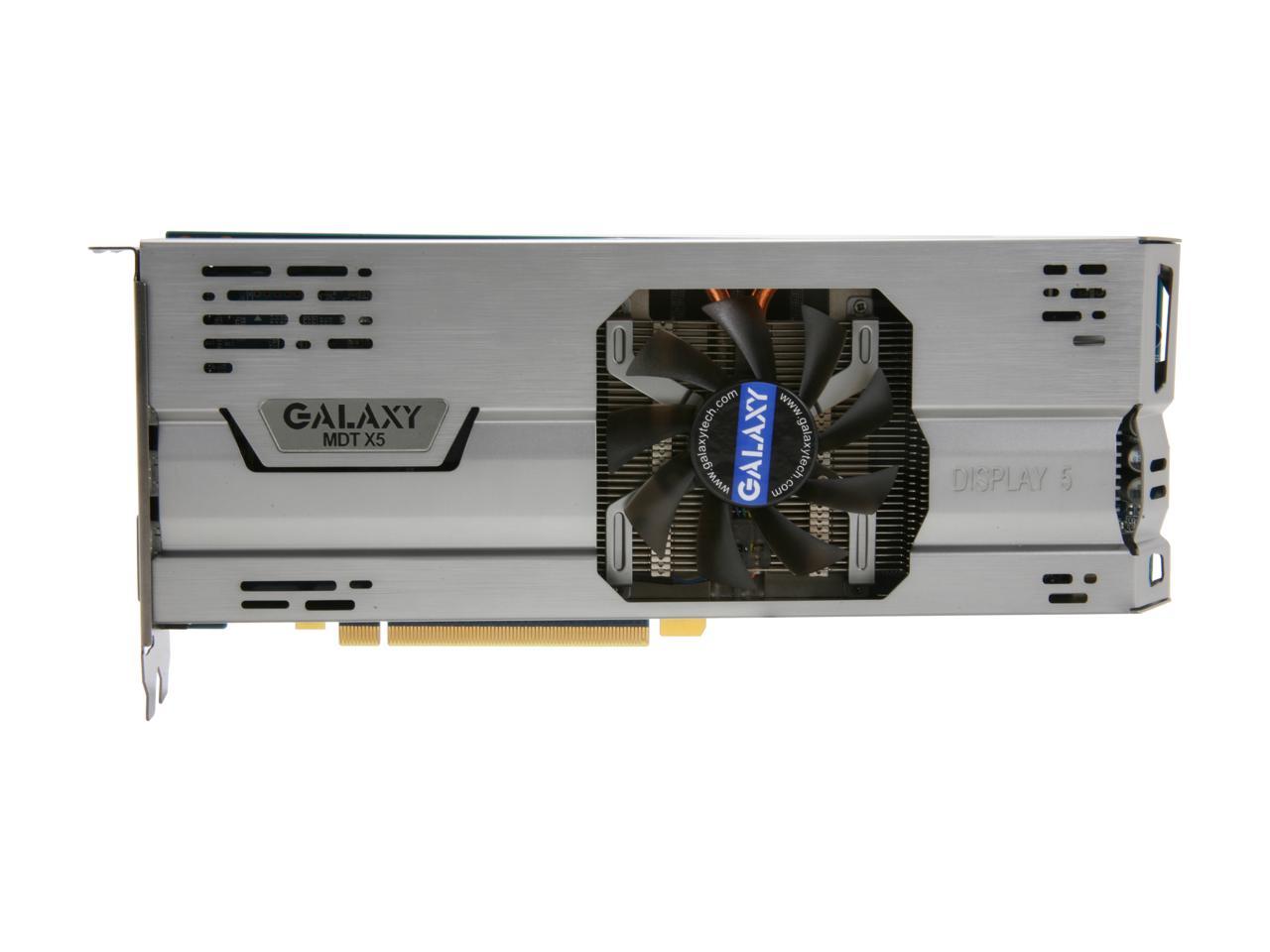 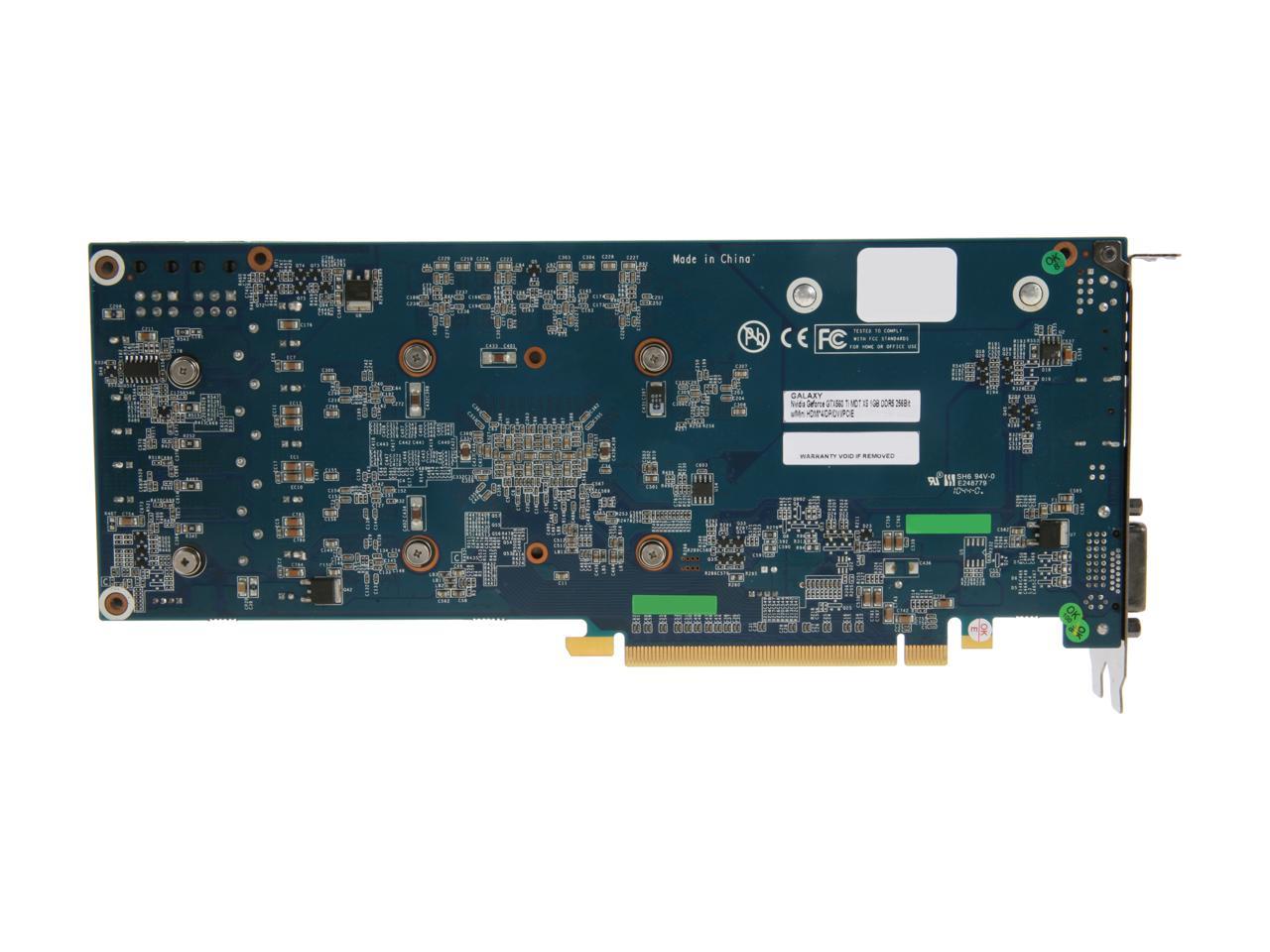 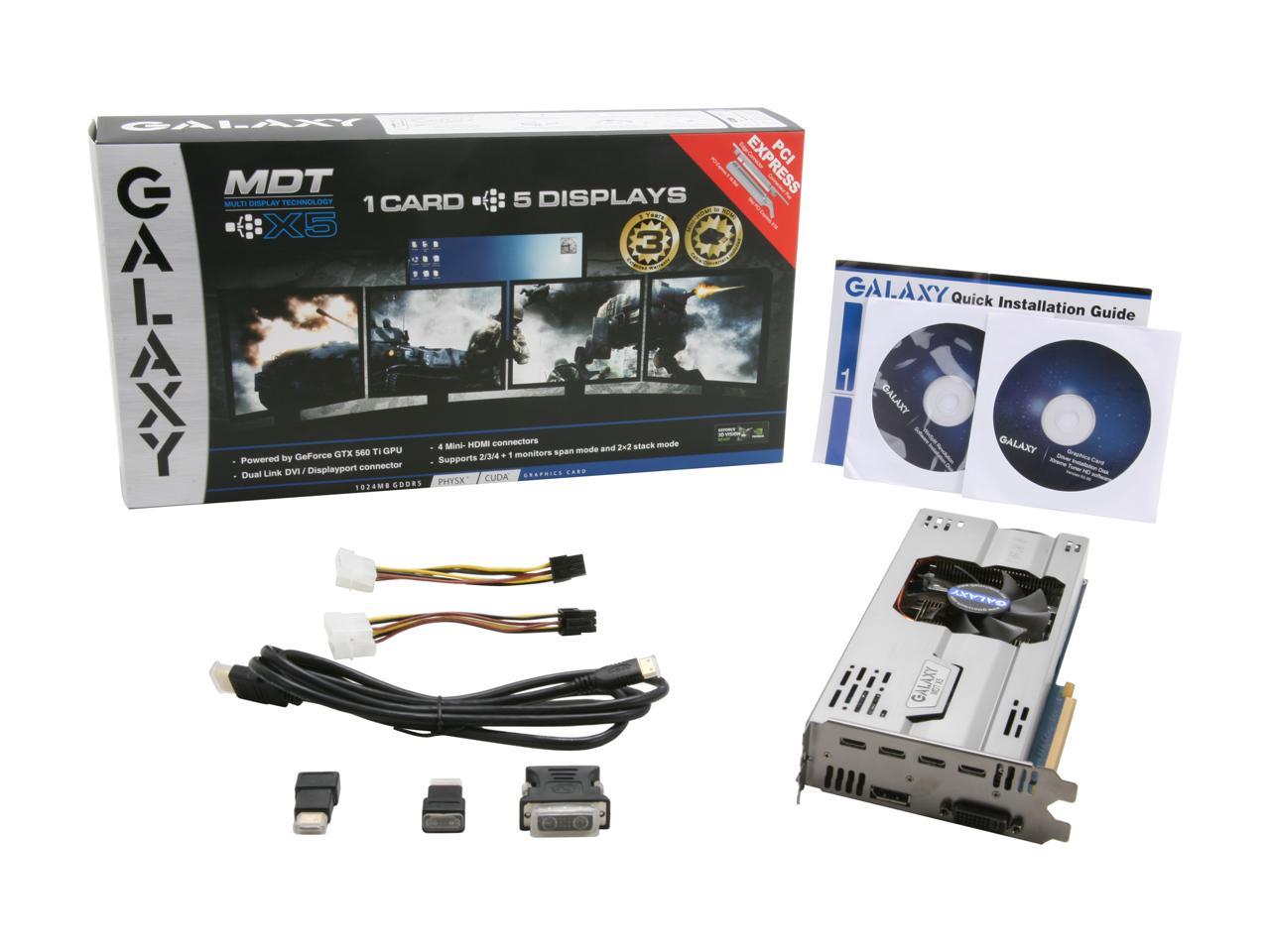 Introducing Galaxy GeForce MDT series, the graphics cards with Multiple Display Technology for both gamers and commercial users. Powered by IDT ViewXpand VMM1400 chipset, the Galaxy GeForce GTX 560 Ti MDT X5 features 4 Mini-HDMI outputs plus one Dual-link DVI & DP output allowing the user to connect up to five monitors to a single graphics card in 2/3/4 + 1 span mode, 2x2 stack mode or clone mode. In addition, bundled WinSplit Revolution desktop management software allows you to easily organize your open windows by tiling, resizing and positioning them to make the best use of your desktop real estate.

Learn more about the Galaxy 56NGH6DM3TTX

Pros: You can use up to 5 monitors with this card. 1 DVI or DisplayPort plus 4 HDMI.

Cons: For a card with 4 mini-HDMI ports one would assume that you can plug in your HDMI monitors only and boot up. That is not the case with this card. I spent half a day figuring out that you have to have a monitor hooked up to the DVI port as well or your PC won't even boot up. To top it off you can not use a HDMI to DVI adapter, it has to be a DVI cable. None of this is documented anywhere. I could have probably lived with the fact that you can not individually setup each HDMI monitor seperately because it treats them all as one display. But the included software, called WinSplit Revolution, was kind of annoying to use. Not even close to being like AMD's ATI Catalyst software.

Overall Review: For the price I paid I would say the performance of this card is average. Even if this card performed exceptional well I would not be happy with the overall usability of this card. It is just ridiculous to require a monitor be hooked up to the DVI port. Especially since the advertising on the box seems to indicate that you can hook up 4 HMDI monitors and 1 additional monitor on the DVI or DislayPort if needed. Maybe that was a bad assumption on my part. Also considering the price of this card I would have expected 4 HDMI adapters in the box and not just 2. Needless to say this card is going back to Newegg.

Manufacturer Response:
Hi Sticky Rice, I'm sorry to hear you're having difficulties with your MDT GTX 560 Ti. If you have not already returned the card, I'd like to ask you to allow me the opportunity to offer my assistance in answering all your questions and getting the card set up the way you want it. First, there should be no problem with using any or all mini-hdmi ports without a display hooked to the DVI. You may need to have the DVI hooked up for the very first run in order for drivers to install and the card to initialize properly, but after this it should not be necessary to keep a display connected to the DVI. Also, I see you had trouble using an HDMI to DVI adapter to connect your displays. This configuration should work just fine. I've connected my MDT to 4 DVI displays myself using mini-hdmi to hdmi cables with hdmi to dvi adapters on one end, and experienced no problems. If I can get some additional information on your hookup, I may be able to help troubleshoot the problem you're having. Lastly, Galaxy has developed our own in-house multi-display window management software, Galaxy MDT EZY Display, to replace the much less intuitive Win-Split software with a simpler and easier to use tool. It is available for download here: http://www.galaxytechus.com/usa/ezy.aspx Please let me know if there's any way I can still help out. I'd be glad to answer any questions or hear any feedback you may have. You can reach me directly at andrew@galaxytechus.com. Thanks, -Andrew Fischer Galaxy Product Manager
Casey C.
Ownership: less than 1 day
Verified Owner
Resolution Issues2/17/2012 1:22:33 PM

Cons: Can't get full resolution on all 4 monitors

Overall Review: We bought this card to hook up to 4 TV's to use in a NOC environment to show status updates on servers. There was no mention anywhere in the product description, that not all 4 HDMI ports would output full 1080P resolution. I also searched the entire exterior of the box and it isn't mentioned anywhere on there either. The maximum resolutions per monitor connected via HDMI on this card per the Quick Setup Guide inside the box are: 2 Monitors: 1920x1200 3 Monitors: 1366x768 4 Monitors: 1024x768 The only way to get full resolution is to run in clone mode rather than span which is besides the point of why we bought it. This was the only card we could find easily that had 4 HDMI outs, and I guess it's partially our fault for not reading the other reviews, but that shouldn't have been necessary.

Pros: You want one huge monitor? Yes? buy this card. Do you want 5 distinctively separate monitors? Don't buy this card. This card creates on huge display and spans across all the output area (at a cost). Kinda neat, if that's what you're after. I haven't done much with it (and I don't plan to), but stays pretty cool, 29-30C right now.

Cons: Metal enclosure seems to be spotty. Shakes around and doesn't feel very secure. This metal also makes the card heavy and combined with how long it is, it seems to sag off the PCIe slot. The monitor spanning is not cheap. Let's say you have three 1920x1080 monitors and wanted to span across them, this card can't give you full 5760x1080. Apparently, that's far too expensive for just one card. Instead it gives you 3840x1024...

Overall Review: To be brief, this card is not what I was looking for and I wish I would have done a little more research on this card because I'm actually returning it. And I could have bought what I'm going to buy and saved myself the ~$40 something restocking fee... It gets 4 eggs because it does what it's supposed to do. And it's not bad at doing it. But it certainly isn't the card I was hoping for. (Can we make a card that does 4+ monitors without having to buy workstation cards?)

Pros: Five displays! Or four! Or Three! Or fewer... ...and you can put the desktop on one and span the others or put the desktop across several or whatever! Runs cooler than my other two 560ti cards. Not too much more expensive than other 560ti cards and has the unique trick of being able to run five monitors at once. If I played games, I'd really like to have the super-wide view of multiple monitors this will do without multiple cards and SLI. It's quiet.

Cons: Well... you have to get a specific driver or your goofed-up and it isn't the newest one or the one on the included CD. You must be careful with your display settings because the card and monitors might not want to run at the same resolution at the same refresh rate. To get the best results it looks like 32-bit Windows XP drivers are going to be the easiest to cope-with which limits usable system RAM. Not as simple an install as most (but then, most won't give you five monitors). Mini-HDMI slots are too close together to use "standard" mini-HDMI to HDMI adapters side-by-side. The HDMI connectors "feel" flimsy when plugging something in. As has already been said, if there is a way to make multiple desktops (one on each monitor) I haven't found it yet. It isn't quite as flexible as I had hoped; being able to run different things in full-window mode in different monitors (it spans, or doesn't).

Overall Review: For reasons I'm too embarrassed to admit I have two of these cards. I want to (and will) span three projectors with a single image while keeping a regular, fourth, monitor as the desktop. This is a really inexpensive solution to that problem, although I now think I should have bought one of Galaxy's 520 4-monitor cards and used DVI to HDMI connectors ($20+ each) both to save money and because the mini-HDMI slots are really inconveniently close to one-another. A mini-HDMI to HDMI adapter and cable come with the card, but to run four HDMI monitors you need four of the mini-HDMI to HDMI *cables* (like the one included) *then* strap-on the full sized HDMI cable. If you use the adapters and big cable, they "sag" and seem like the weight of the cables is going to break something. You really want to think your application through before you purchase this, but the hardware itself actually works. I've removed a star for the flimsy "feel" and need to run 32-bit Windows for simp

Cons: Only can do Horizontal Span mode, 2x2 Stack is not exist. I call their techsupport guys, they said it is not possible to make 2x2 mode. They need to ask me to send request, so they will ask Developer to answer that. Dont get fool with Quick Setup Sheet said, 2x2 Stack mode available. No. or Youtube video, it is not work for you if you try to use as 2x2.