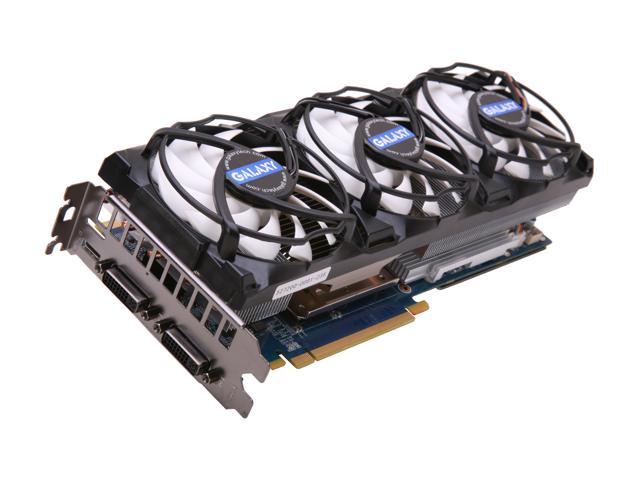 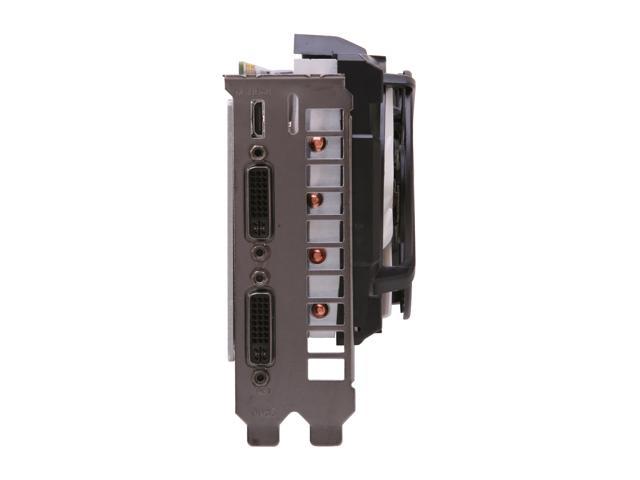 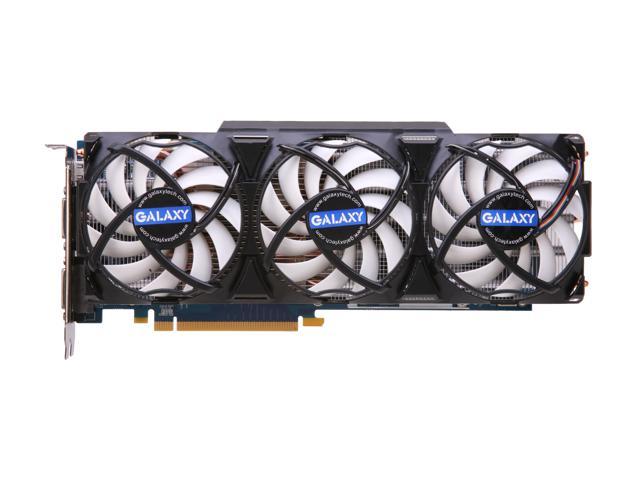 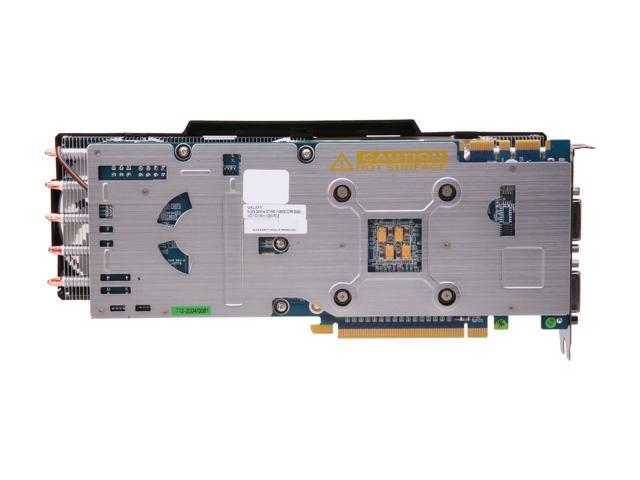 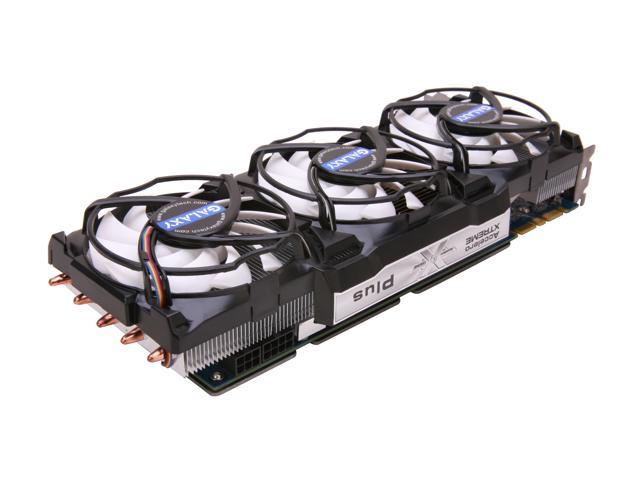 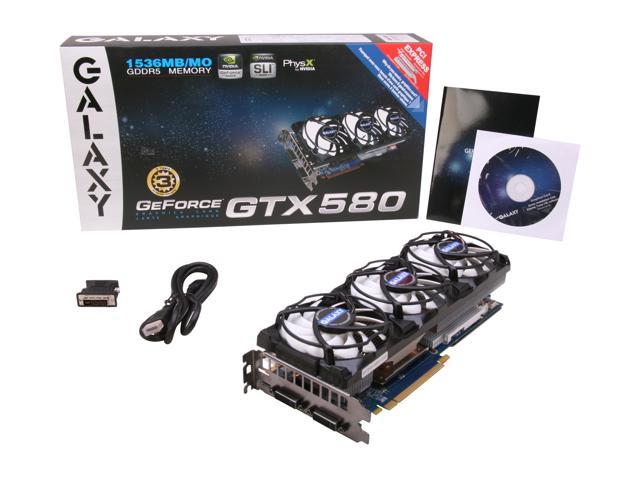 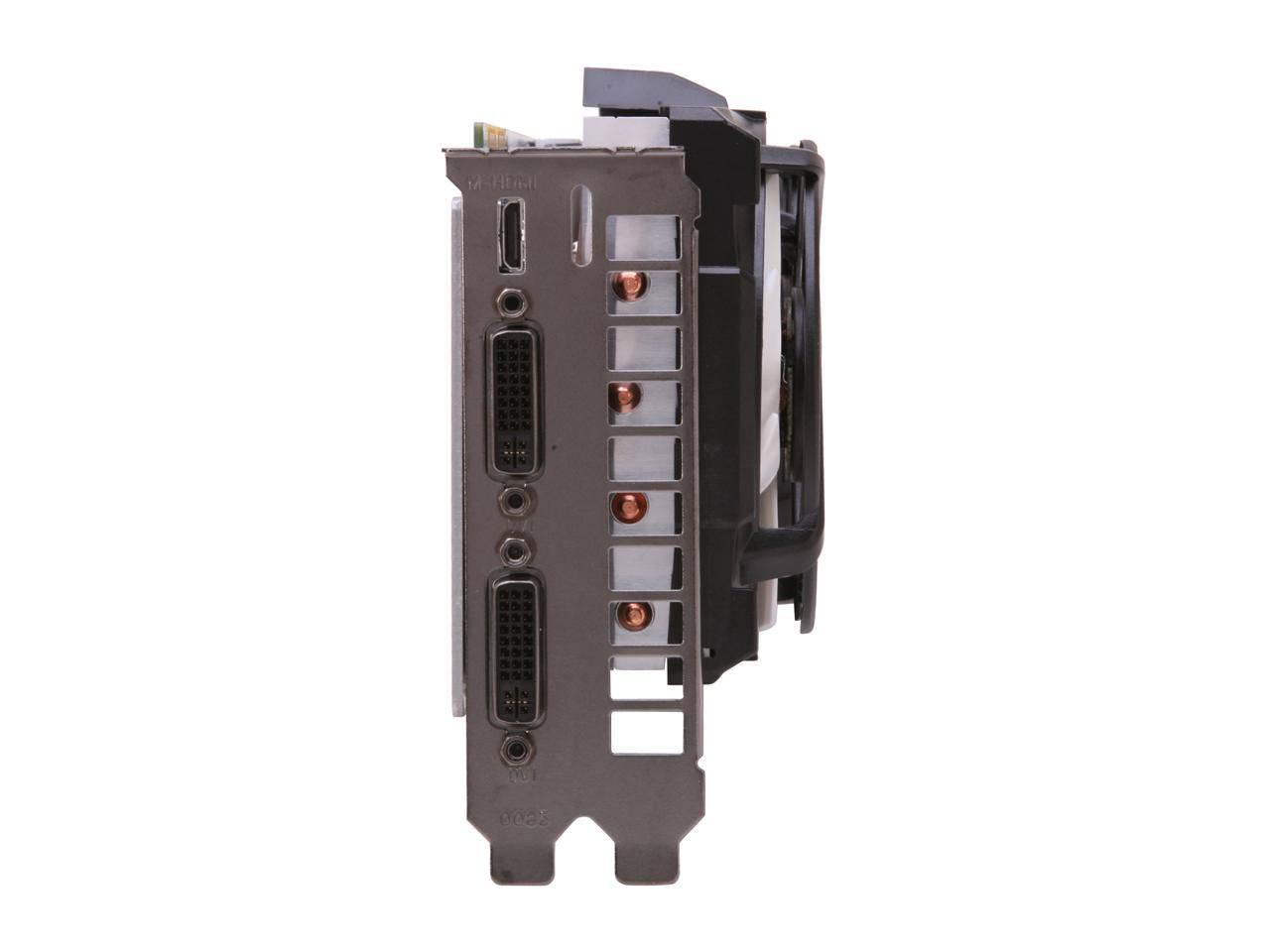 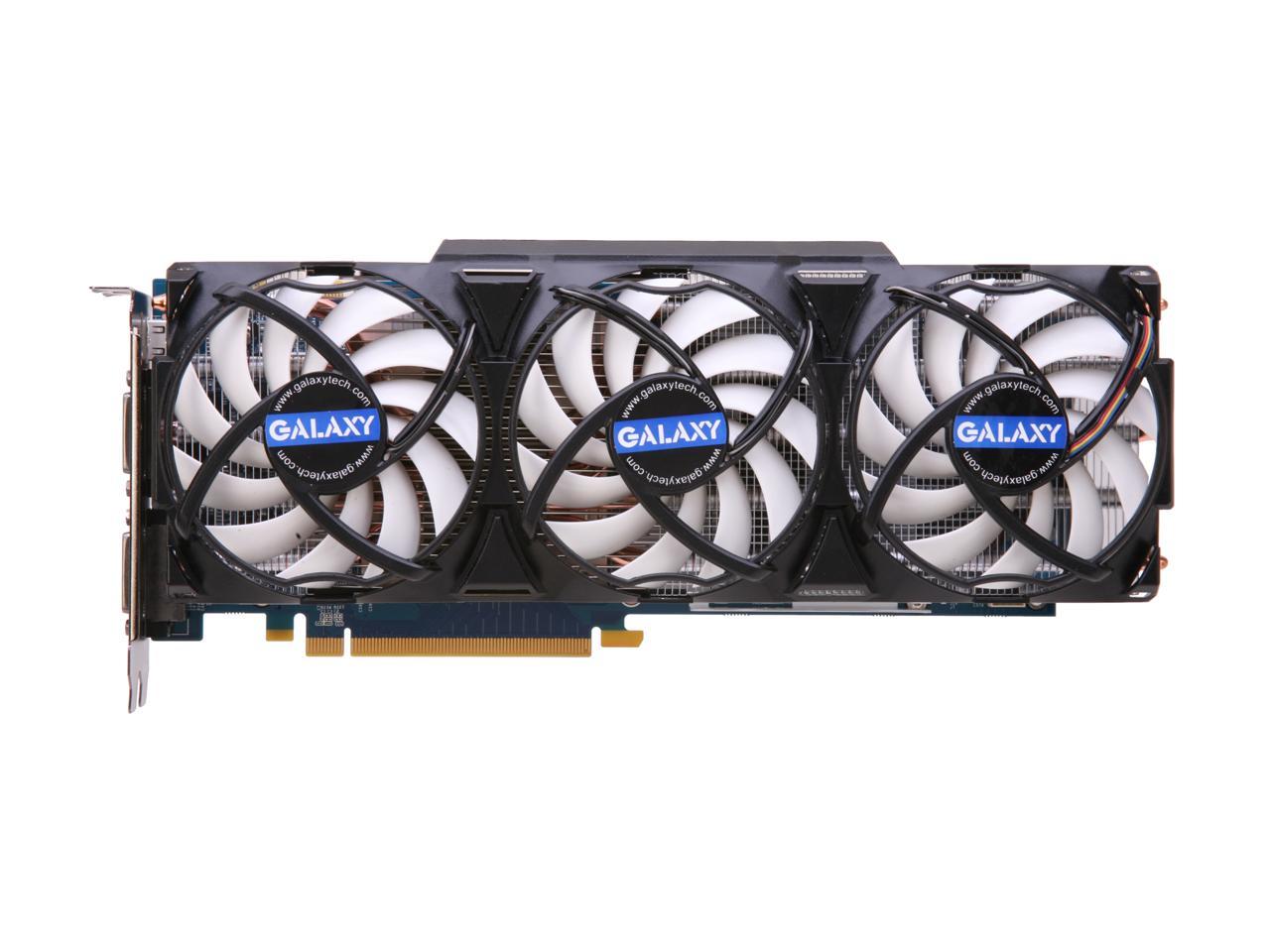 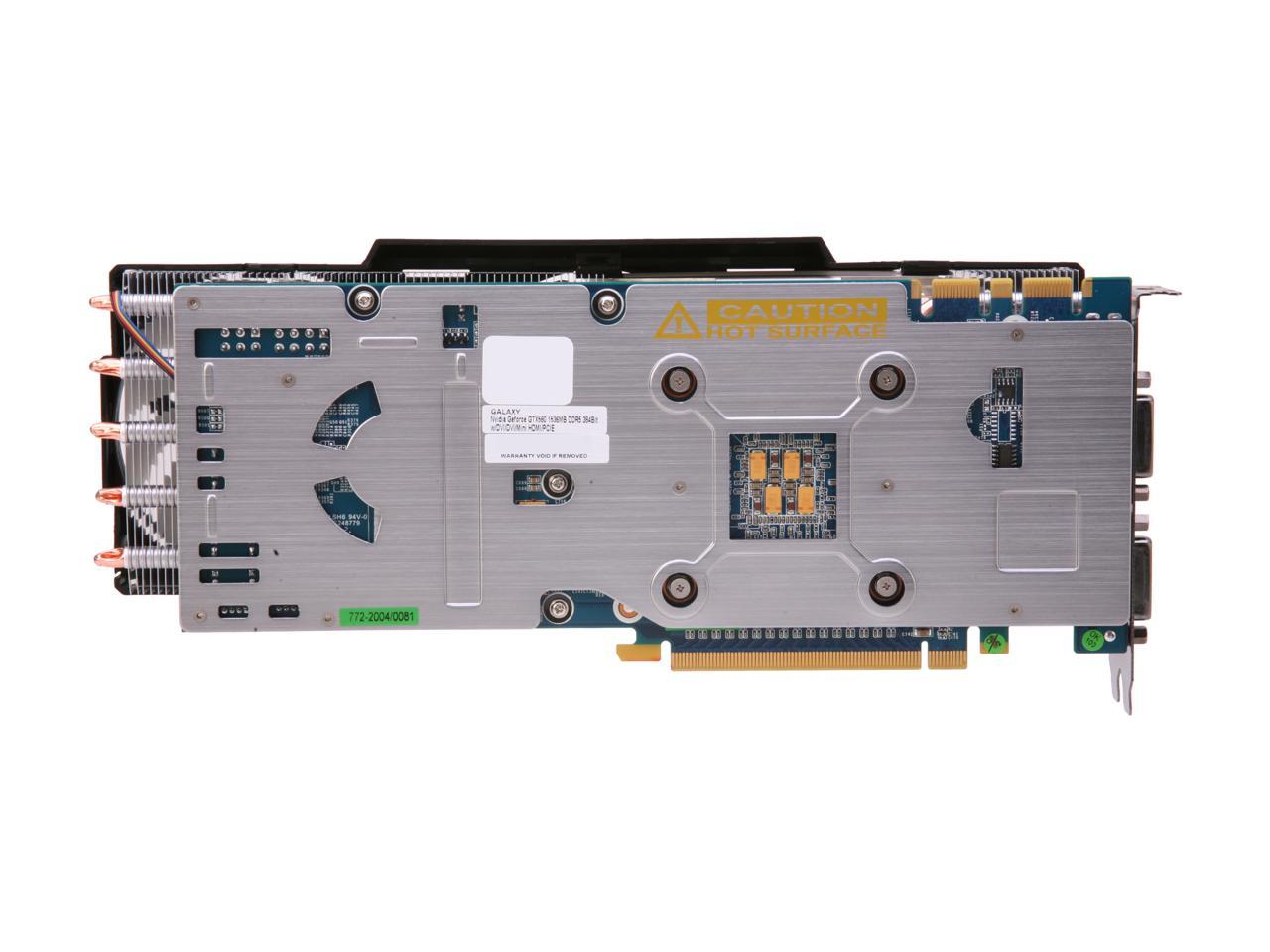 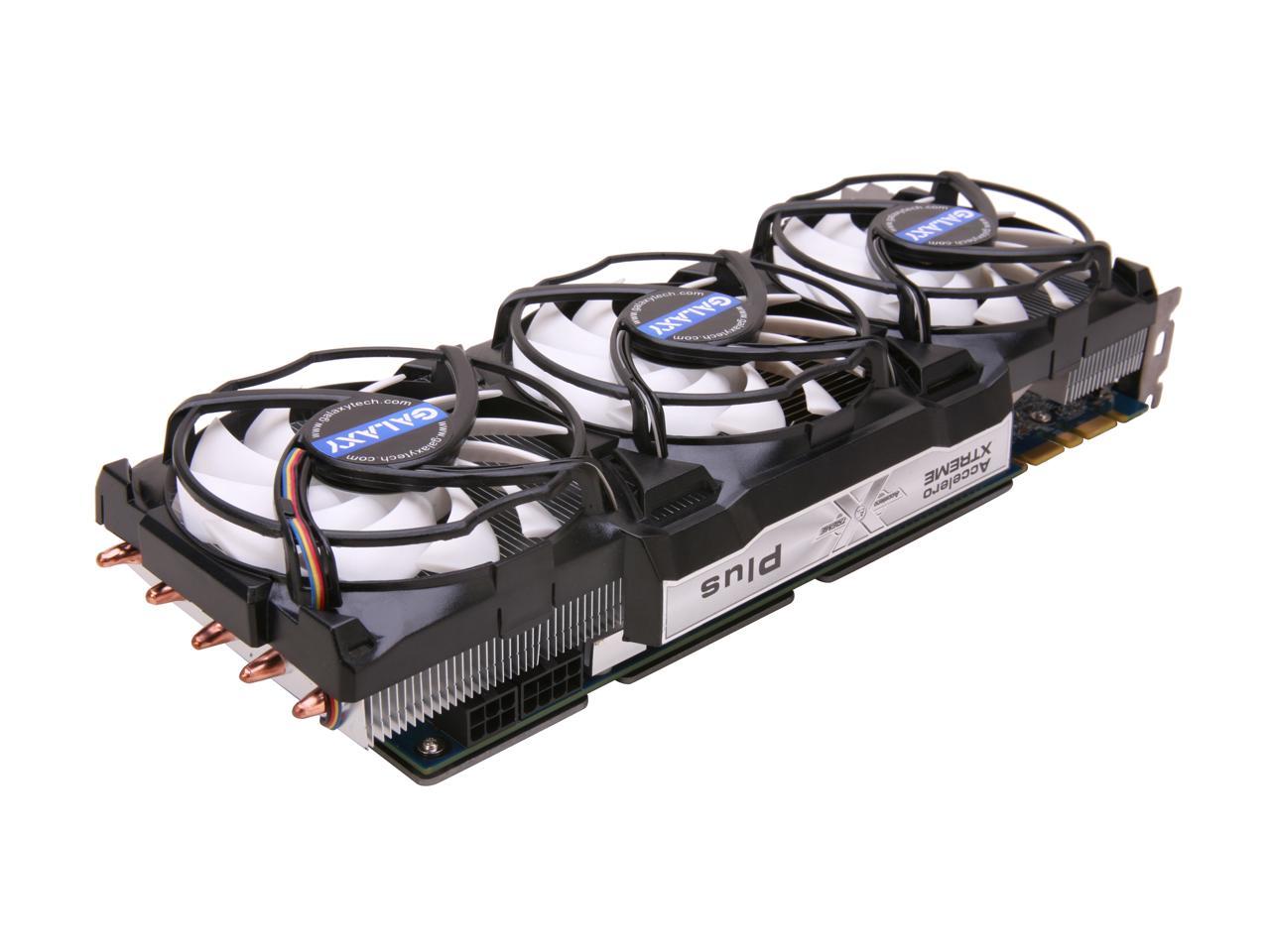 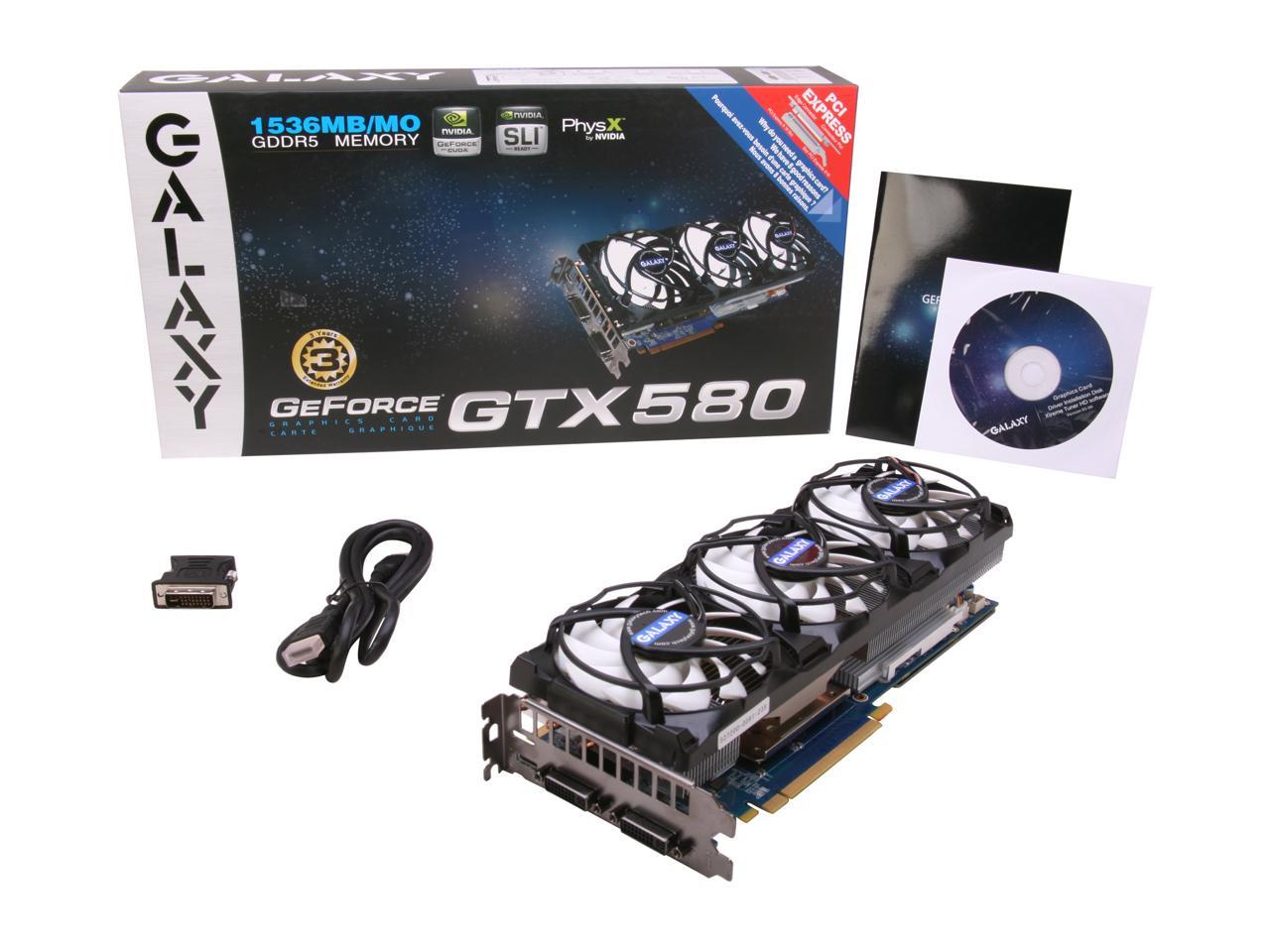 With screaming performance and an innovative new thermal design, GeForce GTX 580 rips through the latest games while running quieter than the previous generation. GeForce GTX 580 – don't play DX11 without it.

The Galaxy GeForce GTX 580 is based on 1536 MB of GDDR5 memory over a 384-bit memory interface, and supports all the premium GTX gaming technologies such as NVIDIA Surround, 3D Vision, PhysX and SLI. Combining with custom cooling, the Galaxy GTX 580 graphics card takes your entertainment experience to a new level.

Learn more about the Galaxy 58NLH5HS3PXZ

Pros: I have tried to support "A", I really have. ("A"=The other GPU.. crazy posting rules) Tired of constantly downloading "A" drivers to fix the 5870 which came out forever ago. Not like the 40c 5870 that I have on watercooling. (Tired of the treatments for watercooling. Worse than having an aquarium with no fish). This thing runs at 32c idle. What, did I say 32c idle? On Air? A GPU that idles cooler than my CPU that has a cooler bigger than my car radiator? Why yes I did :) I used MSI Afterburn to crank the clock to 950hz and played Crysis with max settings to test the cooling. Flawless!! It was like eye candy. No glitches, snags, delays.. NOTHING!!Thing got up to 68c. I was hitting 80c+ on water with 5870 just before the card would crash. You kiddding me? 5870 board would have melted if it didnt blue screen me first. This time I spent a little more and got a whole lot more! Sorry "A", I am not chasing your new releases anymore to get something that is almost like the "N".

Cons: Death, Taxes, video drop outs from "A" cards, waiting for "A" to release another driver to fix a card that should have been fixed years ago.

Overall Review: I read other reviews and inspected this card upon arrival. All screws in tight. Took about 4 min to rip out the old ATI, 3 min to install GALAXY GTX 580, and 5 min to download NVIDIA driver package before I was off and running. I reviewed, reviewed, and reviewed all GTX 580s. Cooling is the name of the game on GPUs. I chose this card for the BIG ol' 3 fan blowin radiator on it with backplate. Why buy a card and then get aftermarket cooling. Card runs silent too. Not like the single fan GPUs that have to ramp up to keep up. SLI will be a problem due to the radiator and 3 slot needed for the card, however, I will not do SLI because I dont believe I would ever need to.

Pros: The temps are really low. Civ 5 with stock speeds on everything, and Max settings in all games, on a fully exposed huge map with 1,334 MB of the Vram being used, the max temp is 47C. Idles at a cool 26C Oblivion, I know, old game. But with max everything in game, the max temp is 38C. Mafia 2 with every game setting on max, the max temp was 50C. this is the best graphics card I have ever owned, and I have had allot of them.

Cons: It is a very BIG card. I have a full size tower, and needed to move some wires around.

Pros: I am looking at my Idle temp on this card..Hows about a chilly 20degrees C..I took a good hard look as all the cards available here on the egg and I have to admit I had my eye on this card over the others. First there is this rediculous BIG ole honkin Cooler on this thing. NO WAY. This can't be the same Accelero Extreme plus heatsink n fans that is on another card for $80 more. BUT yes it is. IT also has a back plate and BIG custom air grills the more expensive card doesn't.. SO again I kept on asking what is the catch.? Oh wait it didn't come with some old has been game or benchmarking tool. Maybe that is why it is cheaper than the other cards by a lot and still has this awesome cooler on it? I threw on BC2 Vietnam and I am seeing frames of 200/ sec.. Played it for an hour or so and my temp in precision is at 40 Degrees C? NO way!! I had to play some more just to see if i was going to go up and nope it was actually at 39 degrees. The second time I checked...

Cons: No free game? No bench marking tool? No lifetime warranty? Imo I think by 2 years we will have a newer bigger badder card anyhow.. There always will be.. I just like the fact that my card will be quiet, nice n chilly for once.

Overall Review: I cranked up the OC to 830hz on the core clock and what you know, the card didn't go over 43 degrees. UNREAL folks. This has to be THE BEST GTX580..I bought this card on basis of the other reviews and I have to admit I am absolutely floored by how cool this card is from my older GTX480.. Going from 80 plus degrees on full bore to a chill 43 degrees is unreal..Seeing gains in frames in BC2 and Black ops. This was the card my GTX480 should have been. I was happy with the performance of the GTX480 but wasn't so happy with keeping the card fan on at 80 plus % while gaming. This card at 60% fan while gaming is almost half as hot as that card full blast..I honestly believe this card has to be the absolute best value for your money..Please don't spend the extra cash on an OCed card. Anyone that knows anything about fermis in general will know they all OC very well..Just how cool your gonna run it with the OC is the question. Bravo Galaxy. I am now a FAN!Give me the cooler vs lame game anyday!

Cons: ...but I had to request an RMA. This card came with only one (1) functioning port, one of the DVI's. Both the miniHDMI and the second DVI ports were showing no signal being put out. Minus -4 eggs.

Overall Review: Contacted NewEgg. They're sending me a replacement with 2 day shipping (should be in by end of week) without waiting for my card -- I get to ship my card back after I receive the replacement, meaning I'm not without my 580! Gotta love the Egg. +2 Eggs

Pros: Great cooler and near silent on 100 percent fan. At this price you cannot go wrong. It has a 80.00 cooler that is near silent and lets you run this card well over 900 mghz core. When people say unreal cooling they don't mean MSI Twin Frozr type cooling or Asus D2 cooler cooling. No, those coolers are good, but they are loud on high and run atleast 20 degrees hotter than this cooler. This cooler is on par with water cooling.

Cons: slower than a GTX 680 and 7970 but when overclocked comes close to their stock performance, but is over 100.00 cheaper and includes the best air cooler made and a back plate.

Overall Review: No need to buy a Gtx 680 or 7970. This card destroys any game out, runs as cool as water cooling and is nearly silent all the way up to 100 percent fan.

Pros: This card is as powerful as you would expect a GTX 580 to be, but it has a massive cooler that does a great job keeping this running cool while staying rather quiet. Idles at 28c, low 60s under load. No stability issues with my 750W, 60A power supply. No complaints so far.

Cons: Some people may find the length to be a problem for some cases, comments on that are below. I would not call this a con though, comes with the territory for a card like this.

Overall Review: Card is very long, I literally had to remove the hard drive bay, insert the graphics card, then reinstall the hard drive bay to make it work. Very tight fit in my mid tower. This is a dual slot card with a massive cooler, it actually takes 3 full slots up on the mobo.

Pros: Upgraded from a EVGA Superclocked GTX 480 and I couldn't be happier! Idles in the upper 30s, compared to the 70s from my 480. At load it will hit ~55-70 at 50% fan speed, compared to the 95 from my 480 at 90% fan speed (in fact my 480 overheated several times causing my computer to crash while raiding, hitting upwards of 107). I don't even notice any noise from this 580 at 50% fan speed. Even when I pushed it up to 100% (which is actually limited to 85%) I could just barely hear it. I am so stoked about that. My 480 was a screamer and you pretty much had to wear headphones to not go crazy from the noise. This thing does everything I wanted it to. It runs very quiet and at temperatures that don't make me nervous like my 480. Definitely recommended.

Cons: It's huge! The board is the same length as the GTX 480 I'm replacing it with but the custom cooler on the Galaxy adds about an inch! It took me 30 mins to shimmy it into my case without breaking anything. Good thing the mobo backplate is flexible and I could bend it out of the way. I nearly thought I was going to have to return it.

Overall Review: I was considering buying the Gigabyte GTX 580 equipped with 3 fans, but at the time of purchase the Galaxy was nearly $100 cheaper with rebate so it was a no-brainer. I also considered getting a card with 3GB of VRAM, but I learned that 1.5GB is enough at 1080p which is what I'm running. If you are running max resolutions you may want to step up to 3GB.

Cons: NONE -BUY IT