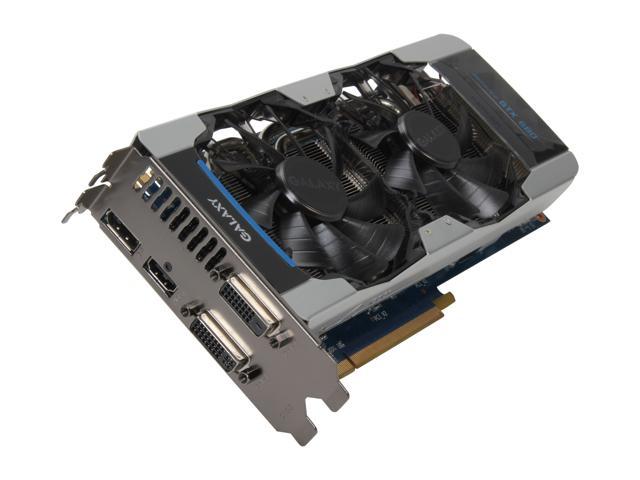 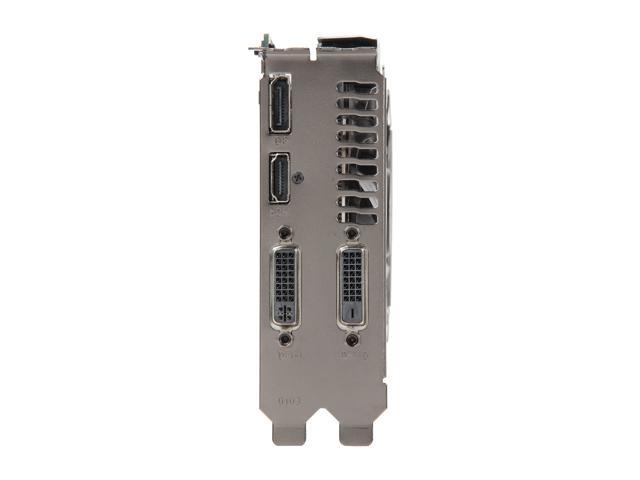 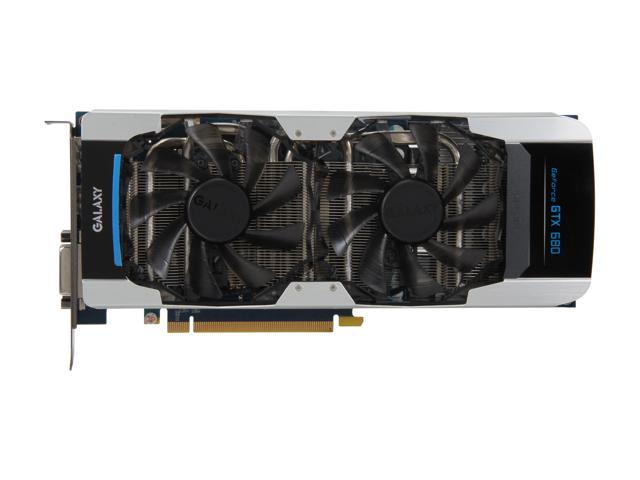 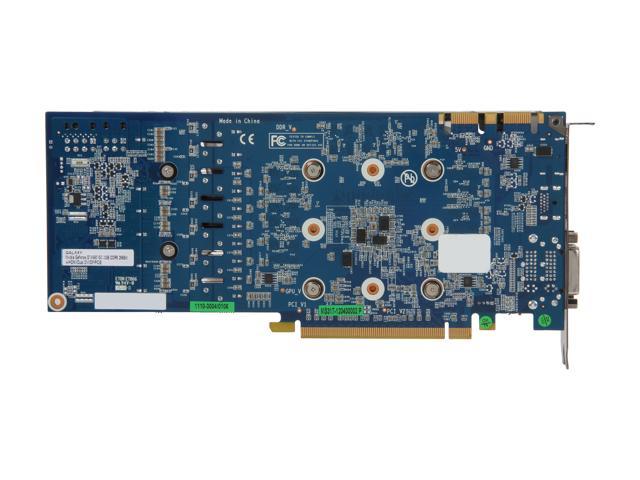 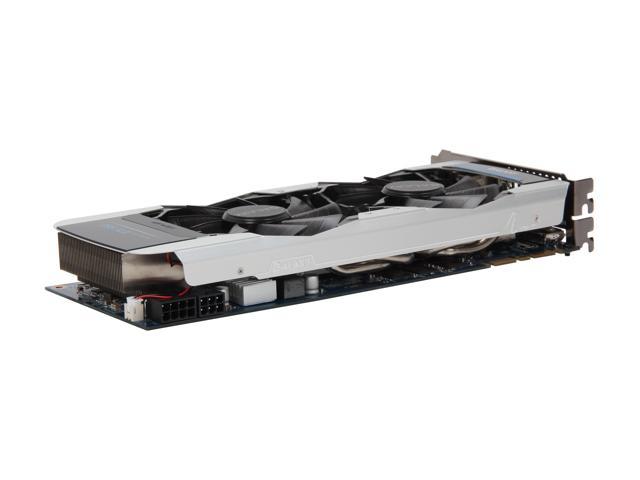 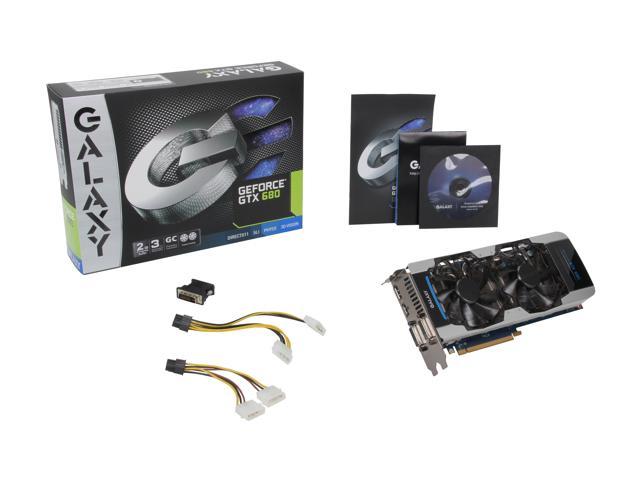 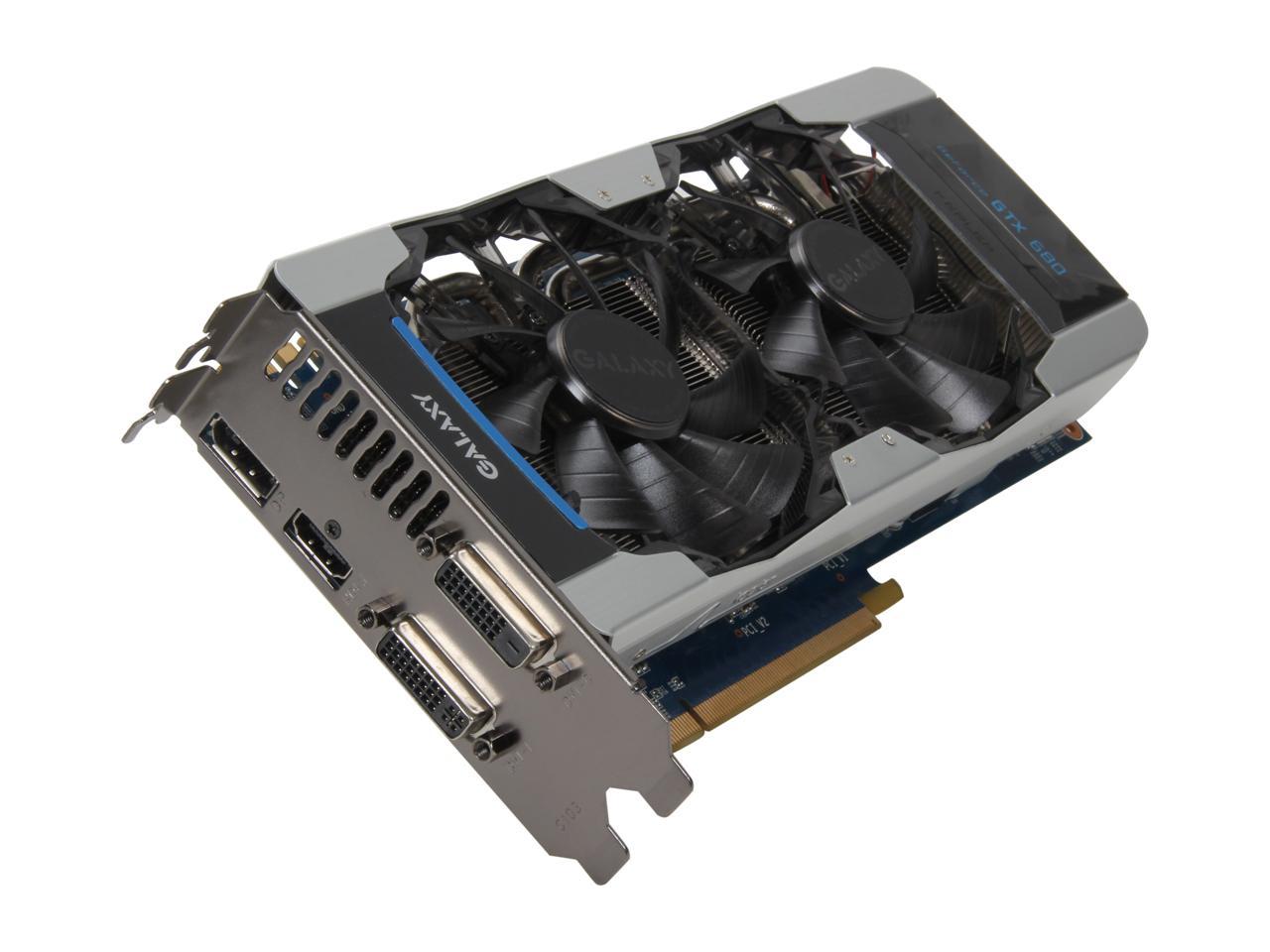 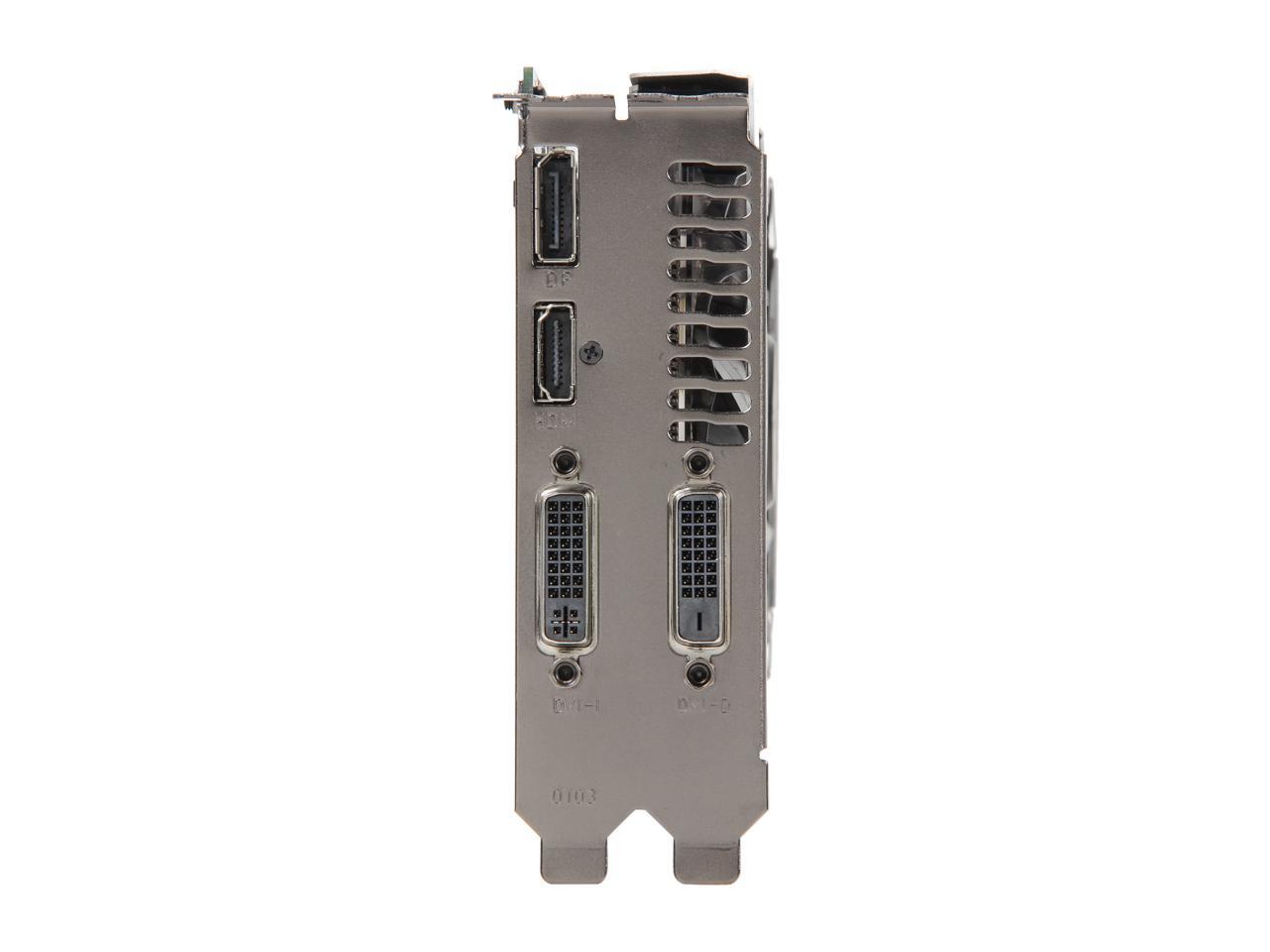 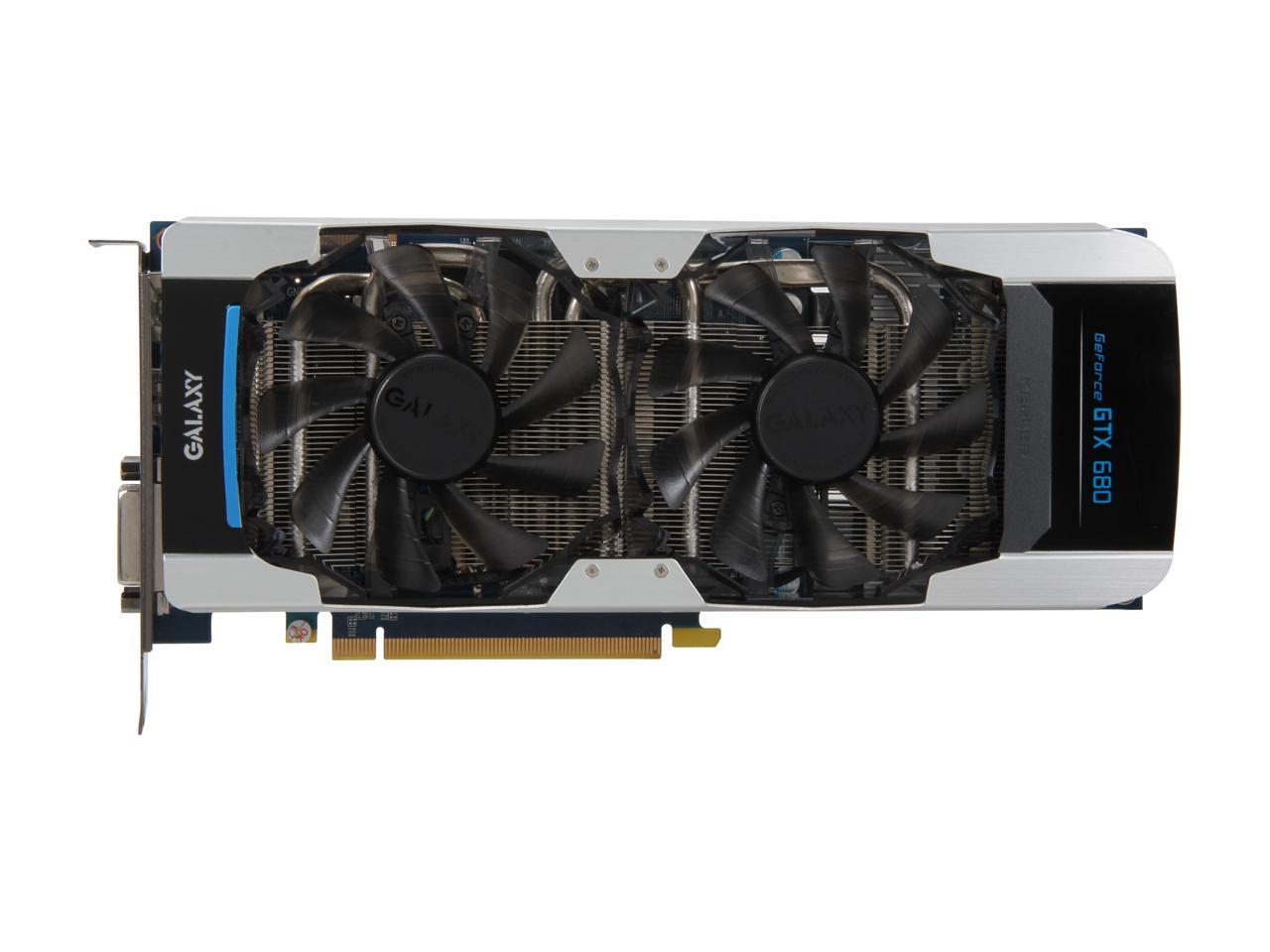 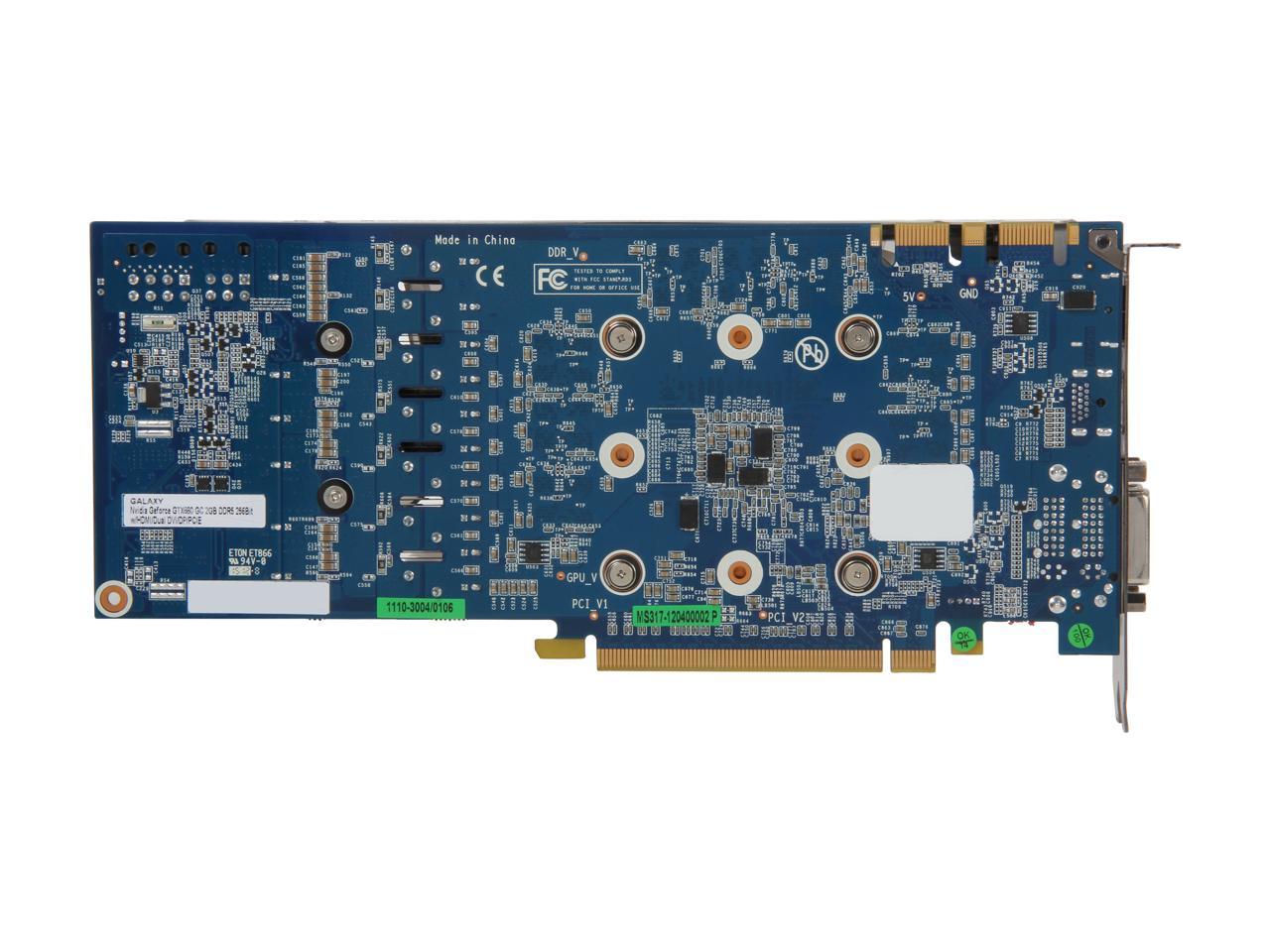 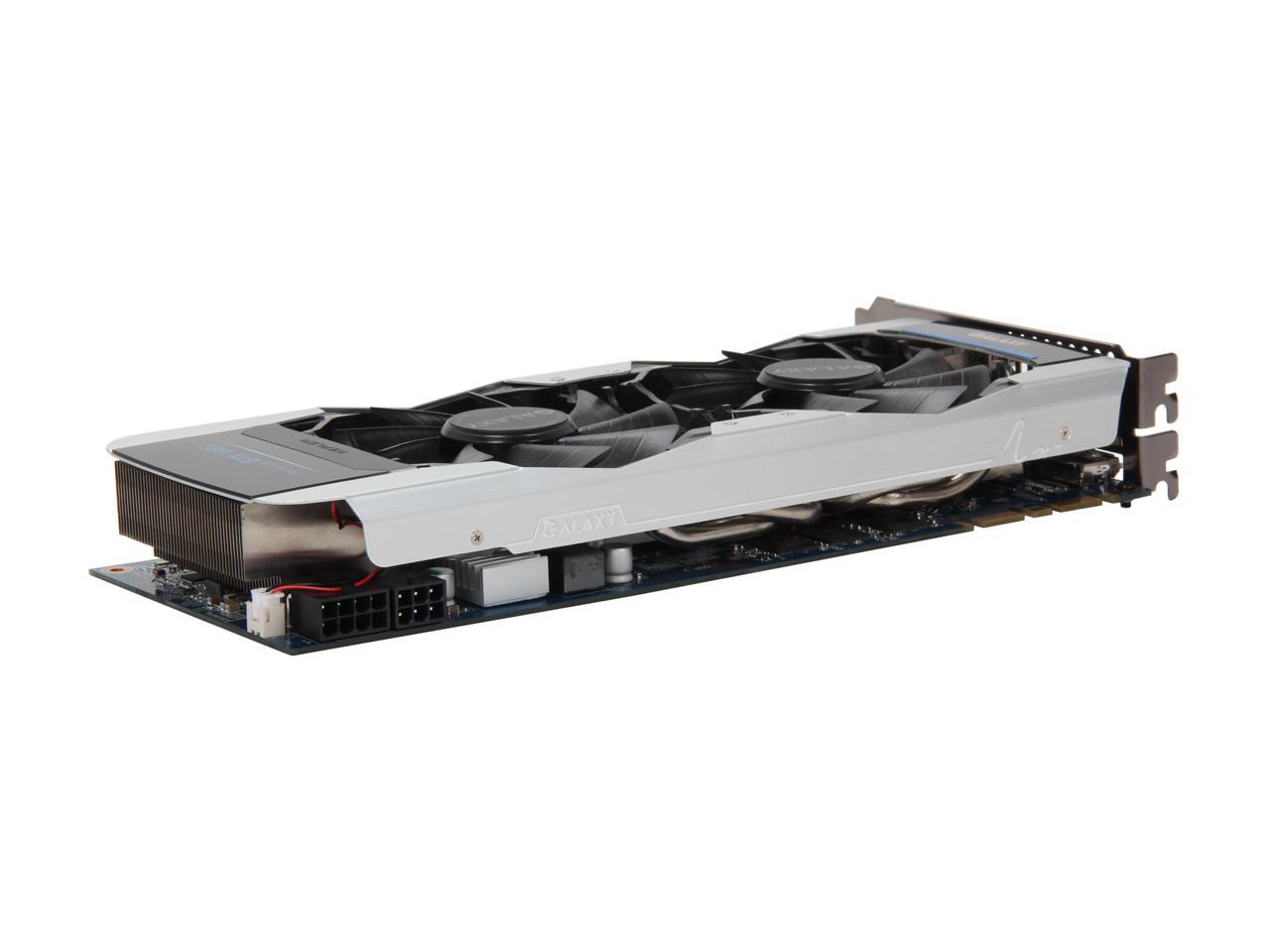 Based on the much anticipated new architecture Kepler (the successor to the Fermi architecture), the NVIDIA GTX 680 is not only the world’s fastest GPU but also the most power efficient one. The streaming multiprocessor is redesigned for optimal performance per watt. GPU Boost technology is also employed to dynamically increase clock speed to improve performance within the card's power budget.

Learn more about the Galaxy 68NPH6DV6AXX

Pros: I made this purchase back in Christmas of 2012 and it's still going strong. I consistently max out nearly everything with power to spare. I only game in 1080p so the 2GBs of VRAM are perfectly adequate. Some nice features: -Factory overclocked. Already clocked to high heaven but according to reviews from other places you can get her up to 1200MHz. I stopped at 1125 on stock voltage. -Quiet! Even at 100% it's much quieter than my old 6870 reference model and left on auto it's rarely ever audible. -Shiny. The GTX 680 logo slowly pulsates in blue but it's not overpowering enough to clash with any build color scheme. -6+8 pin connectors. This is an advantage over 6+6 reference models in that it will allow for better overclocking. -Runs cool: 30c at idle, 60c average underload, 70 maxed out -Rebate: The rebate takes a LONG time to be processed but you will get it. Mine was nearly two months.

Cons: Some of these seem more like nitpicks than anything but are still relevant enough to list. -Blue PCB. Clashes with my system. Meh -Open card; Internal wiring is visible -You have to register with within 30 days or you lose your extended warranty from Galaxy. I did not know this and I am now paranoid that it will fail on me and I won't be able to get it replaced. Register immediately. - FRAGILE. This is what I took an egg off for. Gently gripping the front top of the card to push it into the PCI slot was enough to make me think it was going to break. Every inch of this card is made of thin plastic and gives under weight. This is the most flimsy computer part I have every bought. Be especially careful with it.

Overall Review: These non-reference Galaxy cards seem to go on sale more often and for a lot less than other brands. During the Chistmas season it was only $410 after MIR so if you're waiting for a sale this is the one to watch. I cannot recommend this card for a LAN rig that is always on the go; it is much too fragile to take any sort of abuse. I don't care to imagine what would happen were you to drop it, even inside a case. All in all though I'm quite satisfied with my purchase and knowing what I know now I would still have bought it. Happy gaming and thanks for reading.

Cons: Unstable as it would cause games to become blocky and freeze.

Overall Review: Replaced with an EVGA overclocked 680 with no problems at all. stick with EVGA nuff said.

Pros: Fast stock base clock. I've seen it boost to 1199.9MHz with GPU-Z and under that full load it never got above 43c enclosed in a good airflow case and that's in a 30c ambient room. Great custom cooler. Plumbed for extra power phases (6pin/8pin). Good looking. Probably quiet but i wouldn't be able to tell as my case has (8) total 120mm fans running 24/7.

Overall Review: Admittedly, all I've played so far ( and for months to come) is Skyrim, a DX9 game. However I have the game fully cranked with every high res mod and visual feature available and the card laughs at it all in 1080p never breaking over 43c even during the most intense dragon-burning-the-town type scenes. If your familiar with 680 performance reviews then this isn't a surprise. Newegg lists this card as some random model number but you'll find it on the Galaxy site and throughout the web as the GC edition. This card will take any 1080p content you throw at it with ease. I can't speak to multi monitor setups but based on reviews it won't have a problem there either. Must have card. If your on the fence about getting an expensive top tier card just save the extra money up you need and take the plunge. Your eyes will thank you later. As always Newegg prices/shipping get an A+ too.

Cons: Since it has a dual fan design, part of the heat exhaust inside the case. Seems to be a bit more flimsy than my old GTX 480.

Overall Review: This is an excellent card. I got it to replace my old GTX 480. I can run all my games with everything on at 1920x1200 (Skyrim, Bordelands 2, Assasins Creed III, Dishonored). Having a dual fan design keeps the gpu at reasonable temps. Much lower than my old GTX 480 (which ran very hot). Only thing is that it exhaust some of the heat back inside my case. But I got good ventilation, so not really too bad. It also seems to be a bit more flimsy than my old 480. My setup: COOLER MASTER Storm Sniper GIGABYTE GA-Z77X-UD5H Intel Core i7-3770K G.SKILL Ripjaws X Series 8GB (2x4GB) CM Hyper 212 plus Galaxy GeForce GTX 680 GC 2GB OCZ Vertex 4 SSD 256GB x 2 (Raid0) WD Black 640GB OCZ StealthXStream 700w Logitech G510 Keyboard Logitech G700 Mouse Dell UltraSharp U2412M 24" LED LCD

Pros: VERY FAST, shorter than most, and pretty nice looking. I figured that this card would be cheap made but it actually isnt too bad, most AMD cards are worse lol. Very fast and stays cool there is no game yet thats even made this pant and i haven't even overclocked it yet. The dual fans and custom heatsink is nice i havent seen it go above 62c under full load on boarderlands 2 completely cranked 4x AA everything on high/ ultra. So that being said its a bit cooler than the other models. These will fit in most cases shorter than most cards its actually not much bigger than my old 9800gtx+

Cons: still not being as cheaply made as i was thinking its still kinda flimsy, the MSI twin frozer 3 cards are much better made but $40 more i dunno lol. should have a card with the SN on it and i shouldnt have to register this card asus and EVGA doesnt require that, but 3 year warranty isnt bad. the box should come with a HDMI converter

Overall Review: I've had a bad time with the MSI gtx 560ti 2gb and i know those cards have problems i dont think that these will. dont be afraid to get this card its the same GPU, i dont like zotac,ECS,XFX, or HIS much but galaxy is a bit better than those and being the cheapest and fastest 2gb version (if your running just 1080p all you need is 2gb) just get it its worth it. oh BTW the GTX 680 galaxy signal is an LED which is kinda nice :) my setup asus TUF sabertooth z77 mobo I7 3770k stock speed with CM evo 212 plus cooler 2x8gb corsair DDR3 1600 antec 1000w psu raidmax augusta case ocz agility 3 120gb ssd 500gb wd green hdd 750gb wd blue hdd logitech 600 and g110 keyboard asus 23" lcd

Pros: The Card is super quiet idle is under 40 celcius even after OC and manufacturer OC technical support is 24/7 Reliable XTREME tuner software 6+8 Pin Power plug ins compared to the standard 6+6 on other branded GPU's in the 670 series -SEXXAYY looks - works up to 4 displays WITHOUT having to spend hundreds of dollars on adapters(ati)

Cons: Downloading the OC software requires zipping nothing else

Overall Review: Being a PC enthusiast my self I spend a lot of my times buildling pc's and swapping parts. Ive been through different graphics cards and built a 680 recently. I tried every graphics card from low to high and Nvidia/Galaxy has redefined the truth of gaming literally with these sets. The card was easy in and out of the PC/BOX, very well packed and protected. It came with vga adapters and ide power cables which some may still need. I put the graphics card in, downloaded new nvidia drivers everything has been stable. not even one BSOD as you would expect from galaxy techs. I was able to get a decent over clock on top of the overclock the manufacturer provides. What I find this card siginifcant to another 670 is this is the first non reference i had seen in the market its got duo fans in comparison to the 1, its SUPER quiet even though 2 fans are running, I am able to have this on idle at 40 degrees after manufacturer and personal overclock. This card is too beast!!!!

Cons: Arrived with one fan on the cooler that did not spin. RMA'd with Newegg and ended up being out 7 dollars for shipping because of the shortages.