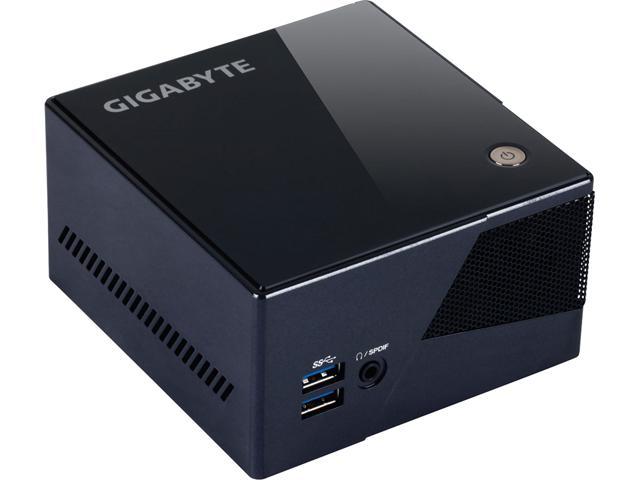 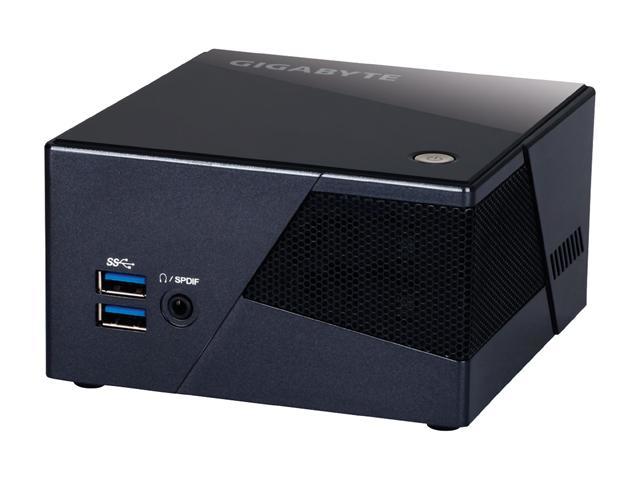 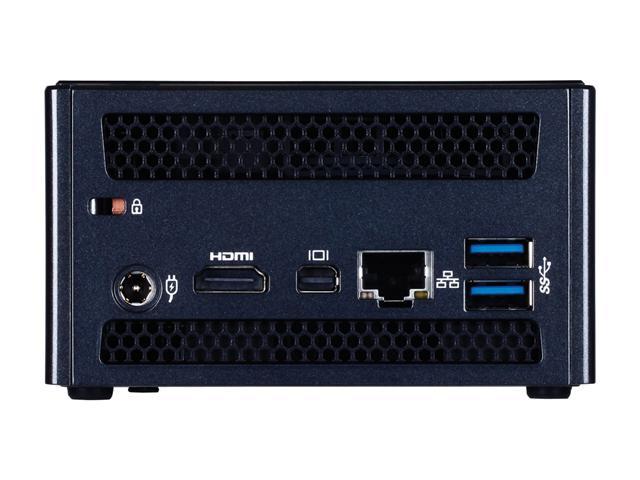 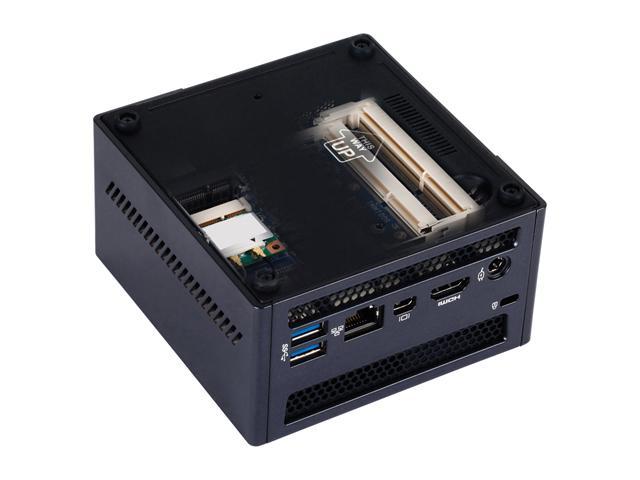 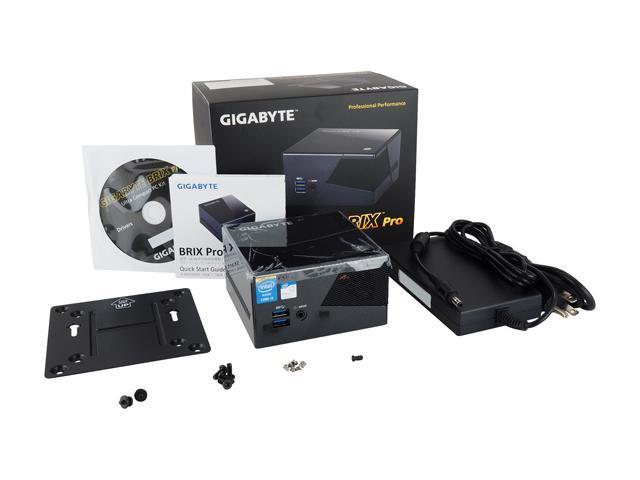 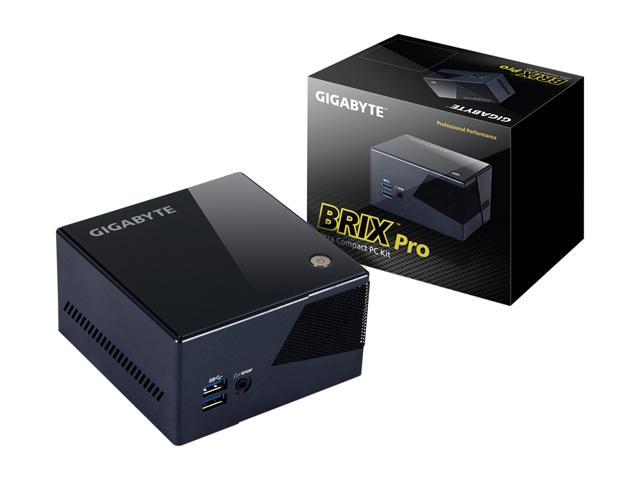 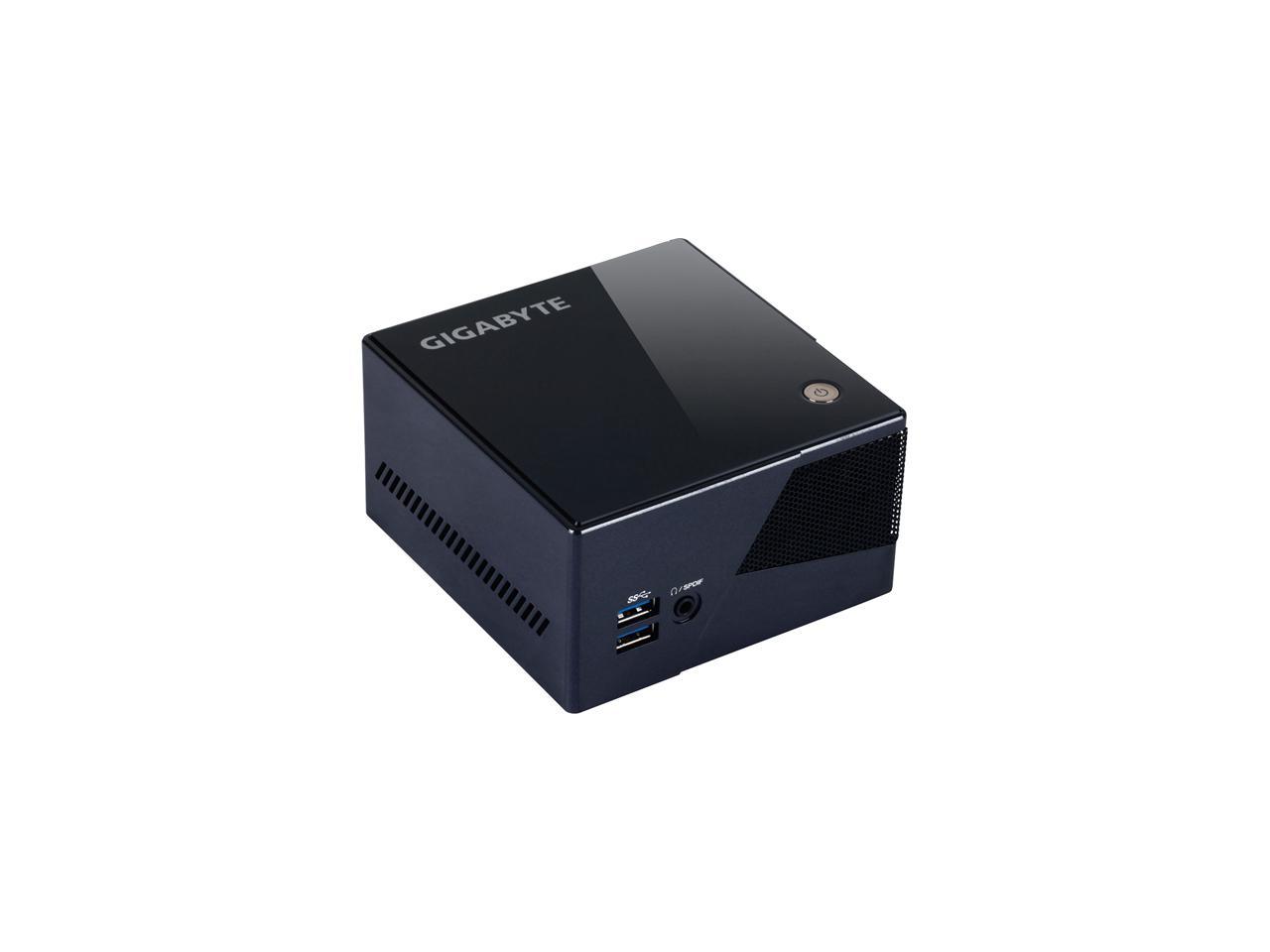 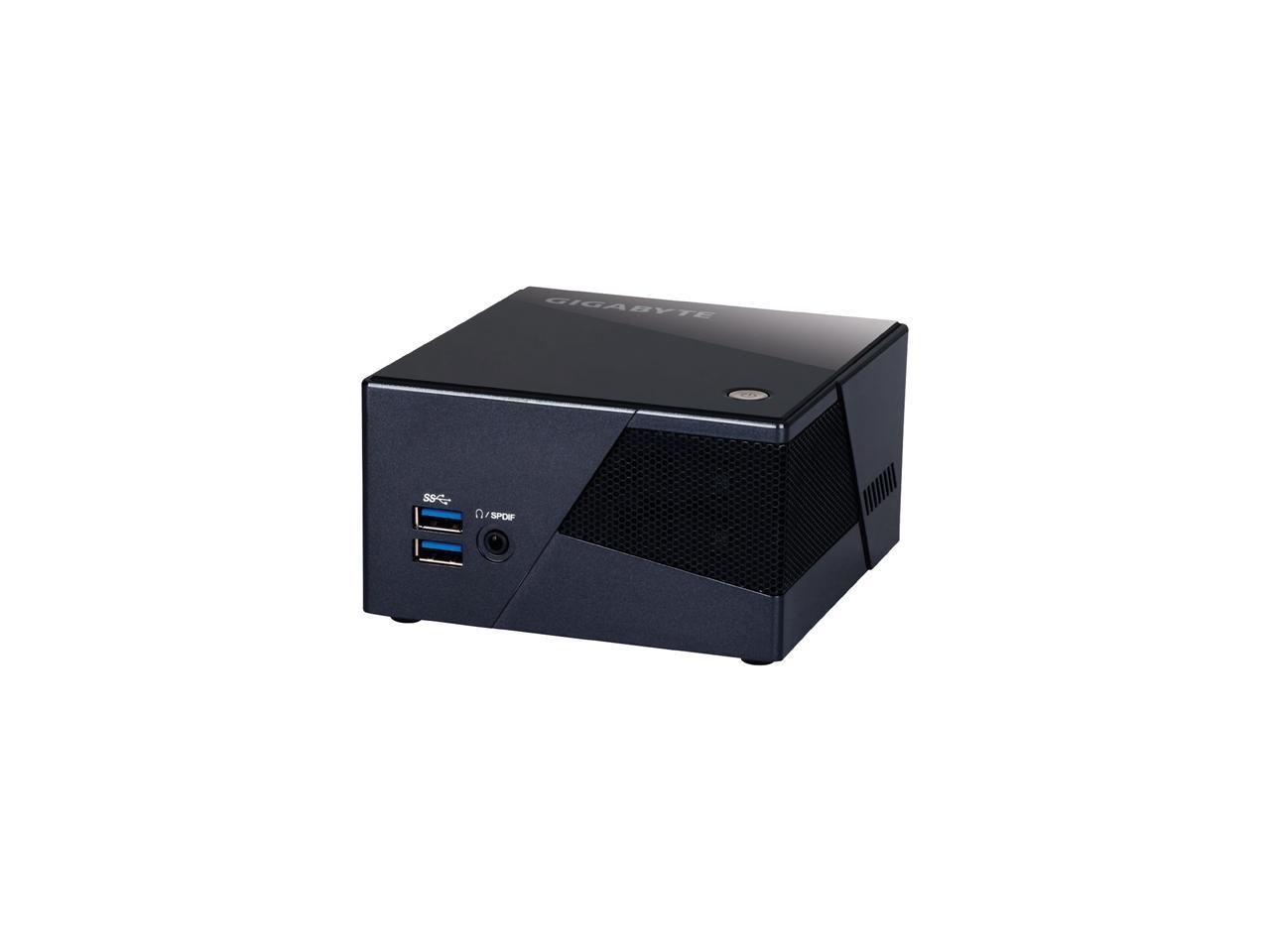 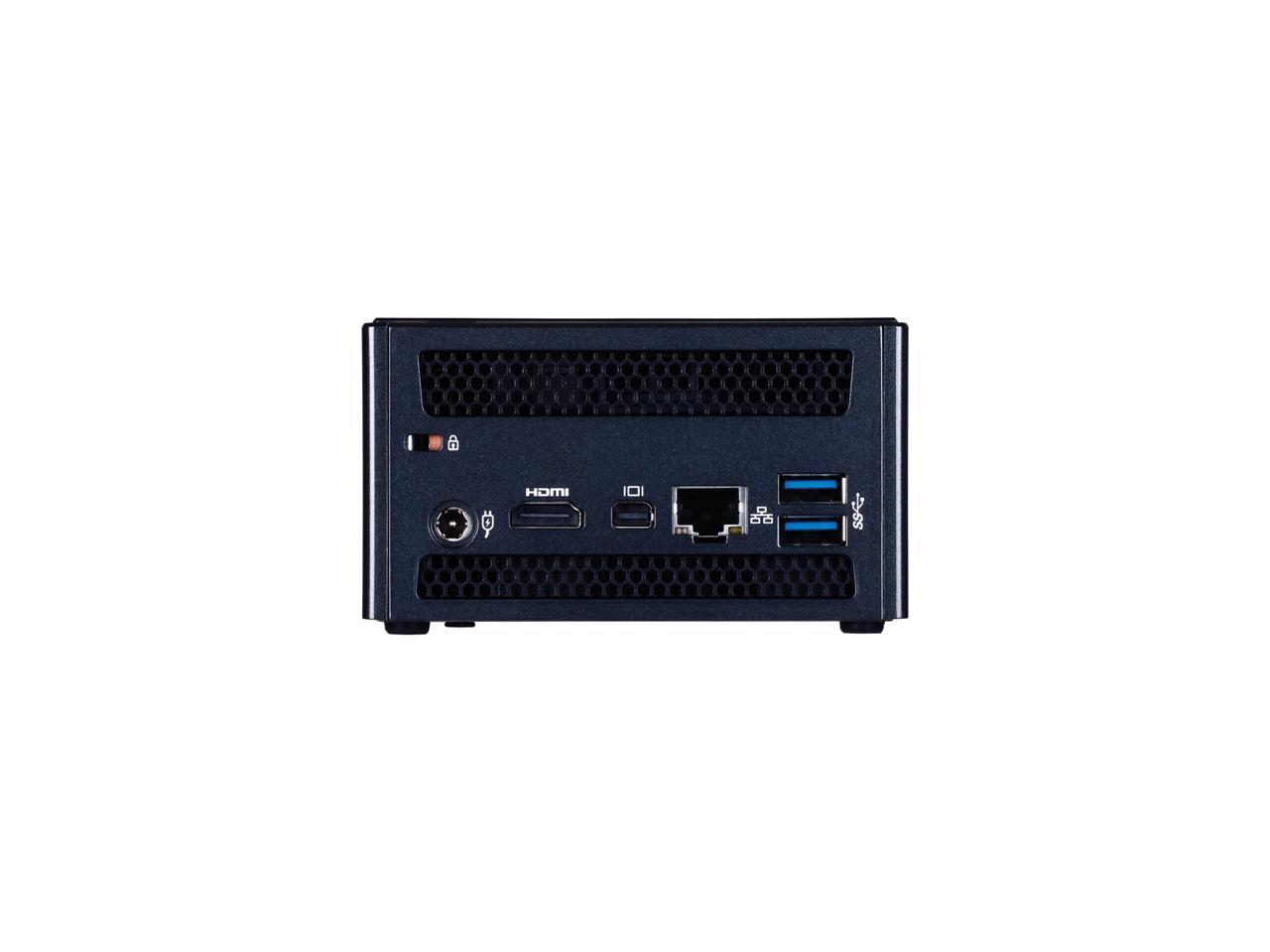 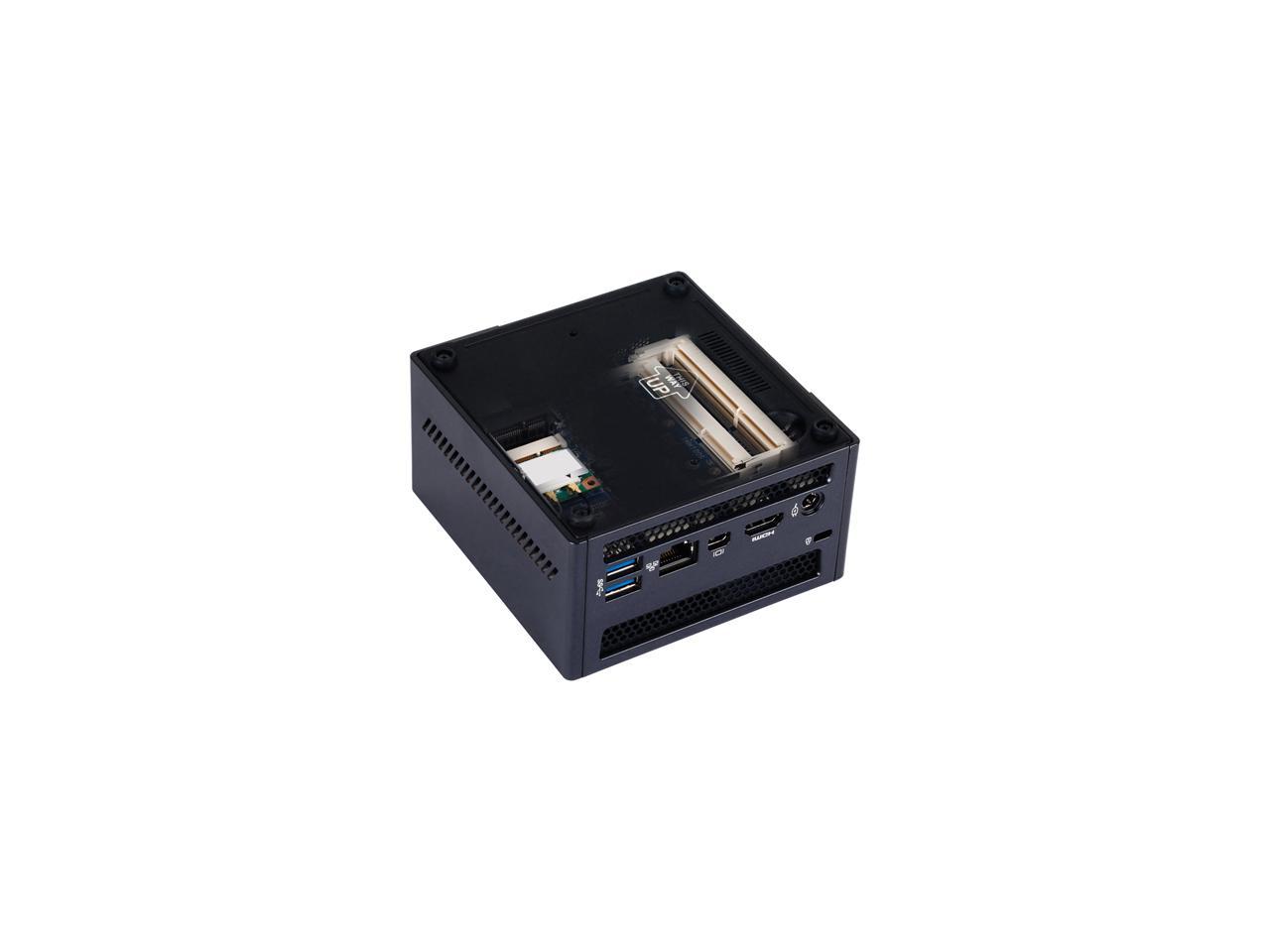 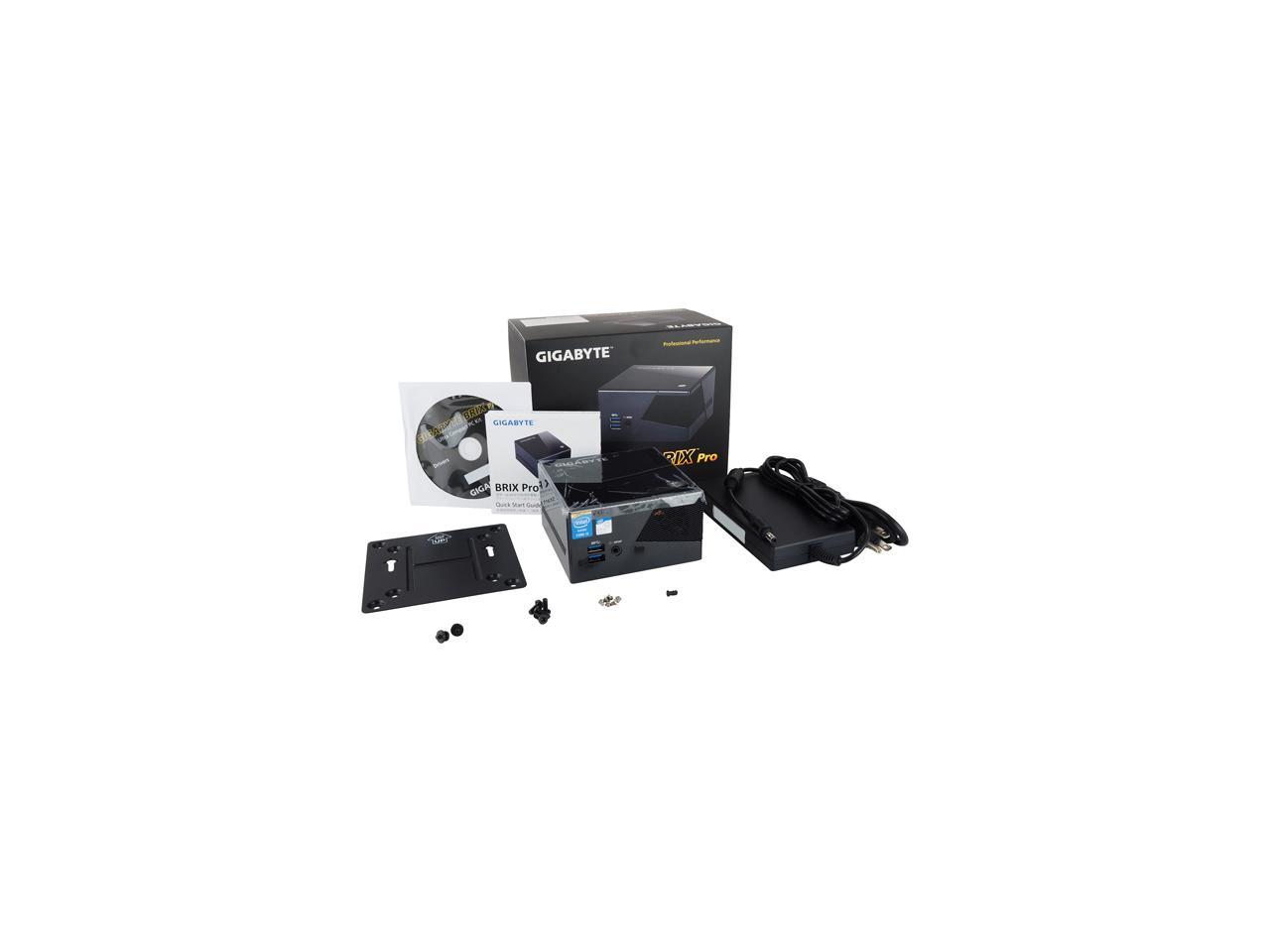 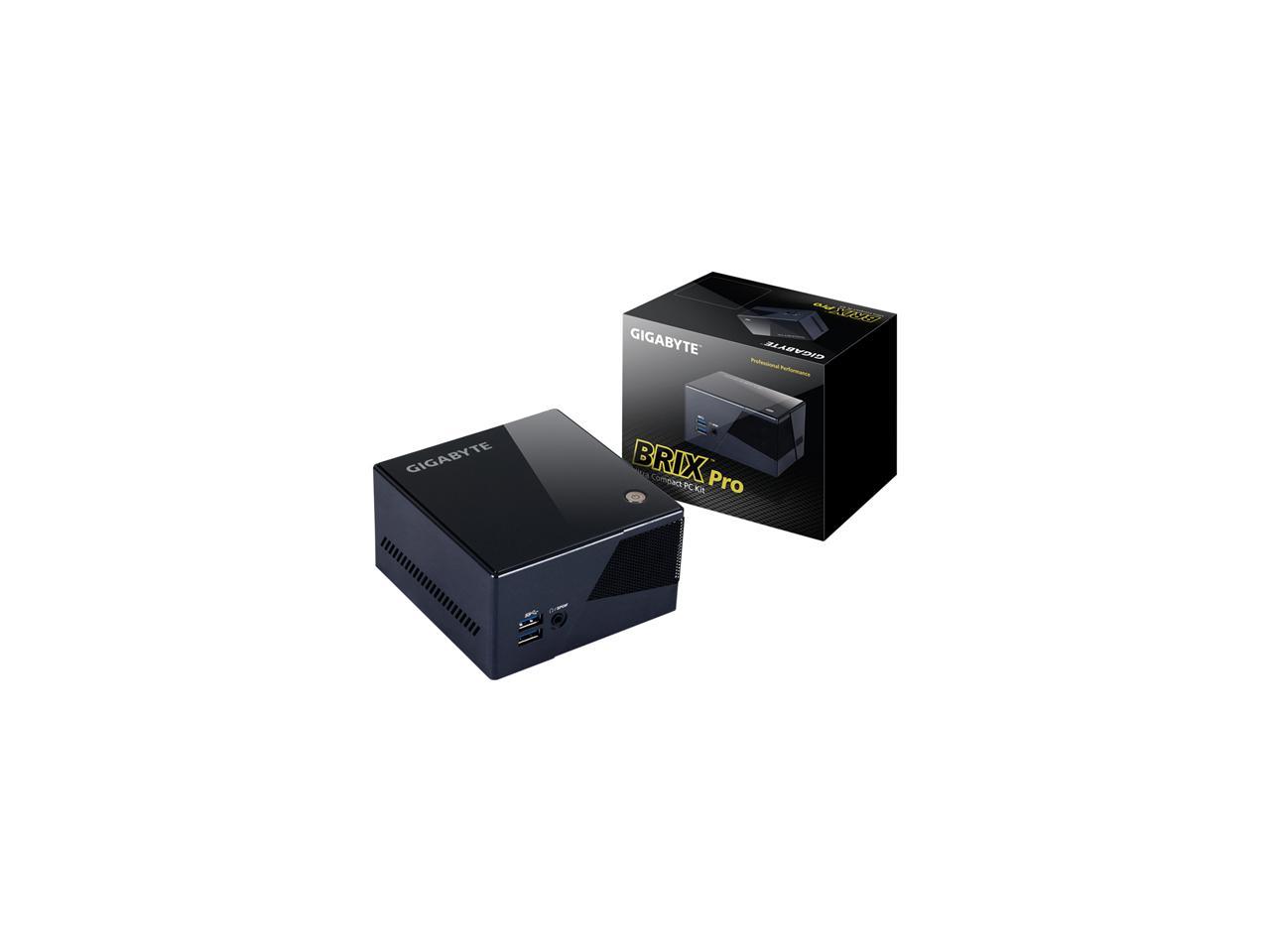 * Wireless module inclusion may vary based on local distribution.

The BRIX Pro takes the signature compact design philosophy of the GIGABYTE BRIX series, adding a high-performance Intel® Core™ i5 processor featuring Intel® Iris™ Pro graphics 6200. As well as a featuring a true high-performance processor that is ideally suited to CPU-intensive applications like image design and video editing, the superior graphics performance of the BRIX Pro means it’s also great for 3D gaming.

Available in black, with a choice Intel® Core™ i5 5575R processors, the BRIX Pro is a DIY PC kit, shipping with a Wi-Fi Mini PCIe module pre-installed, plus power adapter and cable. The BRIX Pro gives users the flexibility to independently choose integrated storage and system memory sizes, with two SO-DIMM DDR3L slots plus support for both mSATA SSD and standard 2.5” HDD installation.

The BRIX Pro is one of the first devices to boast the cutting edge graphics capabilities of Intel® Iris™ Pro graphics. Based on the latest graphics architecture from Intel®, Iris™ Pro Graphics use an on-package 128M eDRAM cache that negates memory pipeline issues, greatly boosting overall performance in 3D applications. Bundled with a VESA bracket, the BRIX Pro can easily be mounted behind a monitor or HDTV making it discreetly hidden from view. This offers a simple and elegant way to turn any VESA-compliant display or TV into a full-featured PC or digital signage unit. * The entire materials provided herein are for reference only. GIGABYTE reserves the right to modify or revise the content at anytime without prior notice.

* Advertised performance is based on maximum theoretical interface values from respective Chipset vendors or organization who defined the interface specification. Actual performance may vary by system configuration.

* All trademarks and logos are the properties of their respective holders.

* Due to standard PC architecture, a certain amount of memory is reserved for system usage and therefore the actual memory size is less than the stated amount.

Pros: Tiny, quiet, fast, full featured, easy to assemble, works with Ubuntu out of the box. Quad core 2.8ghz CPU self clicks to 3.2ghz under load, making games zippy and compiling a breeze. This is a fantastic machine. It's the with and depth of a compact disk jewel case, almost exactly 100mm by 100mm and about 50mm in height. It's so small, but heavy for its size because of the massive copper heat sink they put over the CPU and GPU. It stays very cool and is extraordinarily quiet. Four USB 3.0 ports that provide a blazing fast connection on my Nexus 7P phone over a USB B to USB C cable. I installed a Crucial 500gb MSATA SSD, an older Crucial M4 128gb SSD Sata2, two sticks of 1866 8gb Reaper Ram, and hooked it up to a 32in 1080p 120hz TV as a media server for my 65 year old mother for her birthday. She loves it. She's chilling watching movies and gaming while she recovers from hip surgery. I put Steam on it and loaded her up with her favorite games and a few hundred gigs of 720p movies. She was up the first night till 3am powning the kids online. I have it hard wired on CAT 6 to a fiber modem, and she's smokin fools left and right online. Frame rates are pulling 32fps on 1080p, so we dropped it to 720p and it's running solid at 58fps. It does Netflix like a champ and is running content off our home server without any issues. The back of monitor mount option is cool but not very practical. If you shake the monitor the box could fall off. It does snap into place or anything it's just two additional screws that slot into the metal plate. You could easily remedy this with tape, but it could have been engineered with a spring catch or some other system to lock it in place. The AC wifi card is fast, but has poor range. It really needs and external antenna to catch a stable signal. The lower band does a lot better, but only pulls 32MB/s on download. I set her up on hard line ad it's doing 892MB/s. Works great with the wifi printer and Bluetooth is good too. I can ping it woth my phone from about 20ft away. Comes with the best power supply set up I have ever seen on any device. It has a large durable AC line from the wall to the brick that is 24in long. From the brick runs the DC line which is pretty long, 6ft roughly, but is lighter in guage. The brick sits on the floor below the outlet, so it stays plugged in, doesn't cover any spots in the surge protector, and doesn't put any strain on the outlet or the DC line to the computer. It's brilliant.

Cons: It's hard to get good information on what mSATA drives work well with this machine. I chose the Crucial drive I did because one of the reviews mentioned this machine in his comments. Many people have had issues getting drives that work. By default the BIOS loads the SATA 3 drive first. Not a big deal, but I had to manually set the mSATA drive as my boot drive and install grub on it. Be aware of that if you're doing a Linux box on here. By default, many installers will chose the sda drive for Grub which is generally the first one in the BIOS. Ubuntu uses the UUID by default in FSTAB so it's not a big deal, but it can cause problems if you remove the SATA 3 drive to upgrade it to something bigger. The screws are all Phillips #1 which is fine, but they're Nickle plated brass, and cam easily strip. Several of my screws were overly tight on disassembly, and I stripped two of them. Get a good jewelers screw driver to work on this machine. Don't overly tighten the screws.

Overall Review: If you are looking for a small server, great desktop box, or something to game on that isn't over the top expensive, this machine is great. It can game, it can compile, it can edit raw photo images in GIMP without flinching. Streams 1080p YouTube videos like a champ. You should totally get this if you just need a simple desktop computer to do all the things, and do most of them well.

Pros: Very compact and powerful. We use this for our Kiosks for a naval museum where there isn't enough room for a desktop. This is a really cool concept and although I use these primarily for work, I may just get one for home use too.

Cons: Have to assemble HDD/SSD and RAM and install operating system and drivers. On the flip side, it is then very customizable. You can add the amount of RAM you need and a hard drive the size that you need.

Cons: loud fan when gaming (sounds like a jet taking off)

Overall Review: This replaces my wife's old Athlon64 desktop. It's so silent, I now hear other stuff in the office that I couldn't hear before, because her old computer was so loud. This is completely passively cooled. For email, web surfing, and light word processing this thing is more than capable. I wish I'd gone this route sooner. Only downside is now I hear the fans in the server in the closet. I see more upgrades in the near future!

Cons: Difficult to load windows 7 so I bit the bullet and installed windows 10. After about 2 months it stopped recognizing the USB 3.0 ports and the windows 10 warning about the USB ports would not cease, making the machine unusable.

Overall Review: I have been a newegg customer for many years now and their customer service is exemplary. Arranging RMA through newegg customer service was absolutely painless. As of today (1-20-2017) they have received the returned package. Now we will see how prompt I receive my replacement. If past history is an example I think I'll be very pleased. Follow up... Today I received notice that newegg has accepted my RMA return even without the original packaging. Newegg's Premier Service is worth it's weight in gold. Great customer focus and agents that bend over backwards to help you. Thanks Everette, job well done.