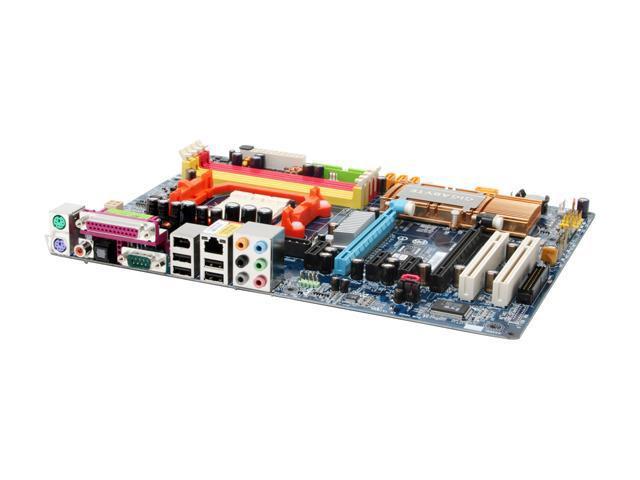 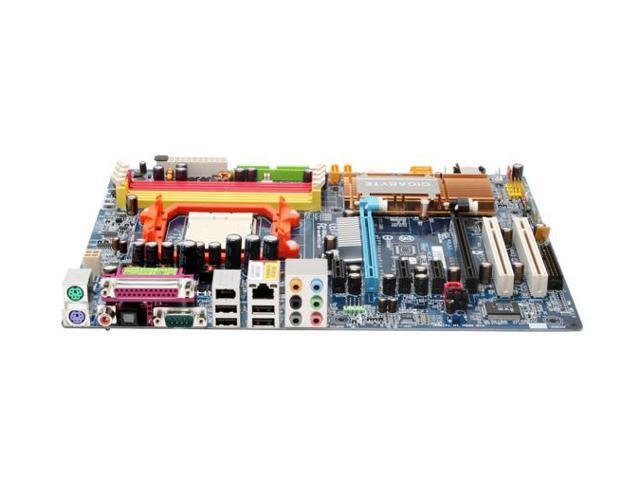 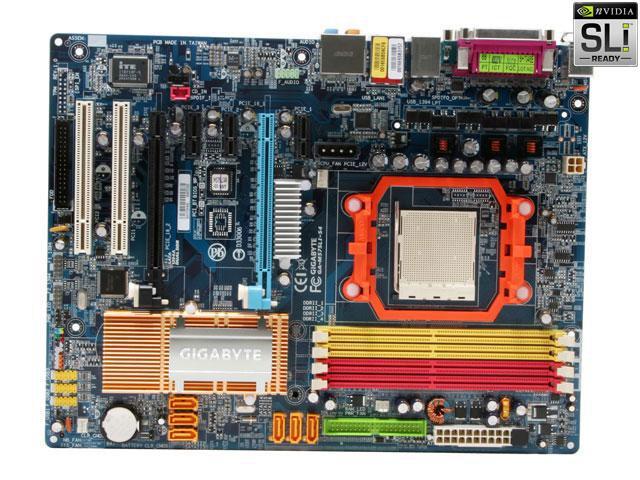 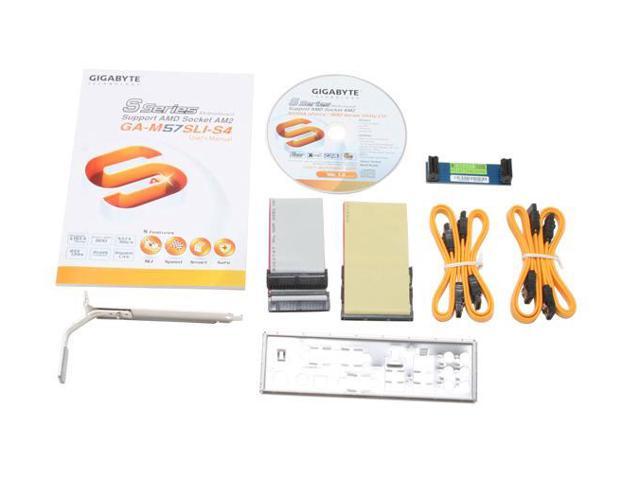 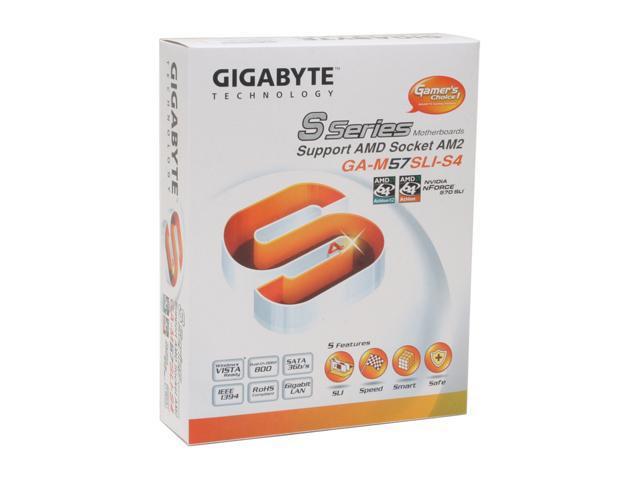 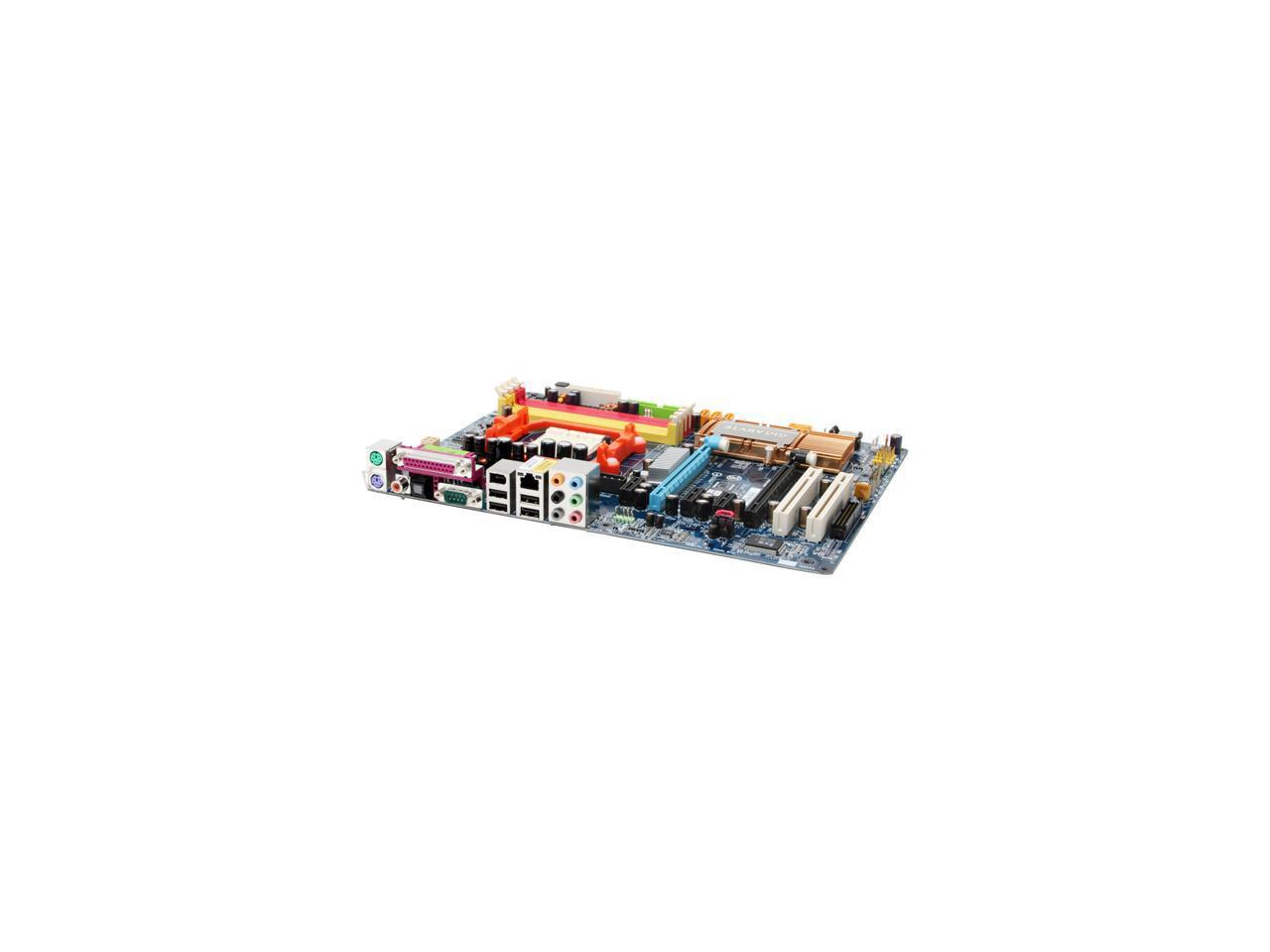 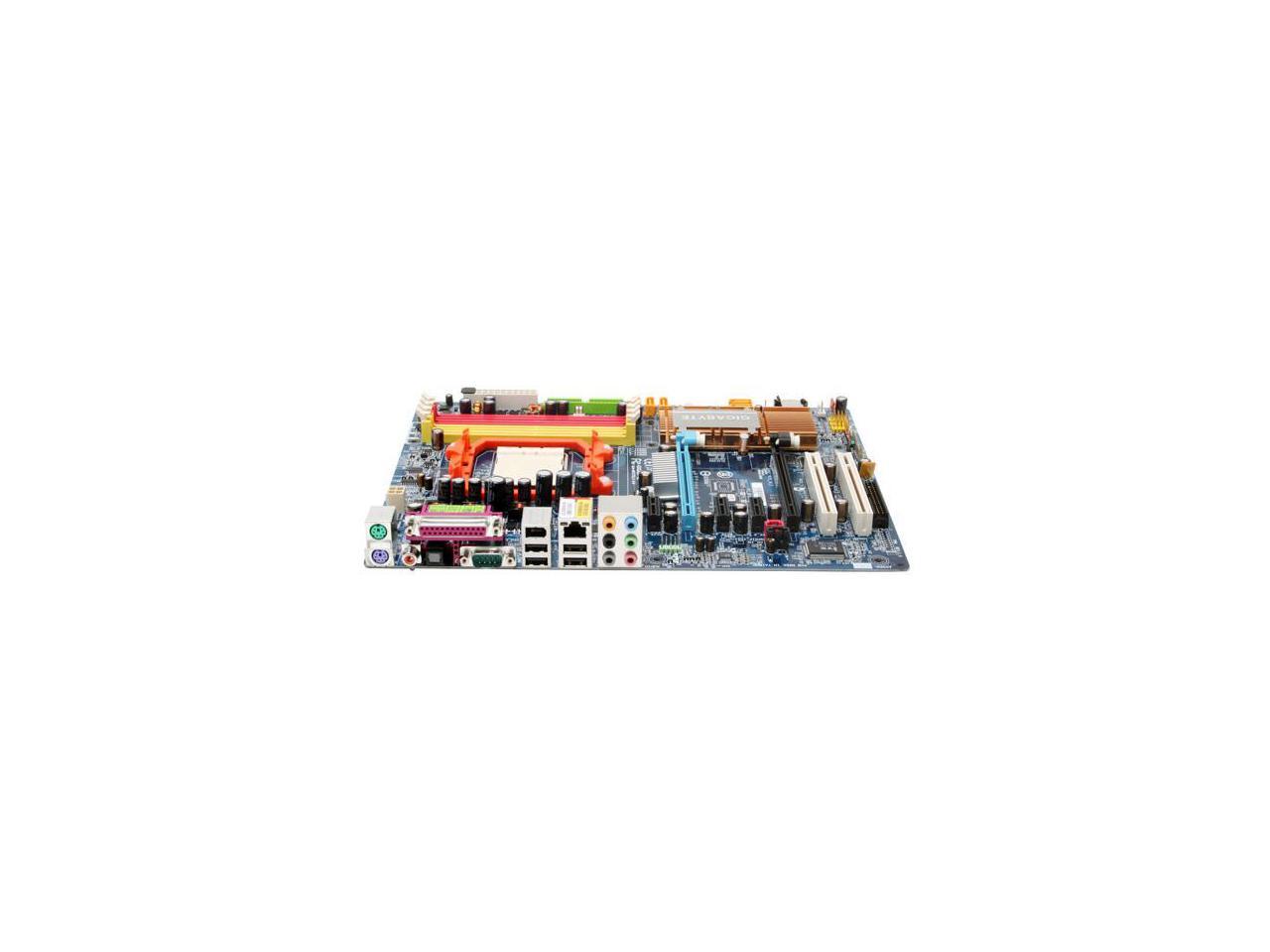 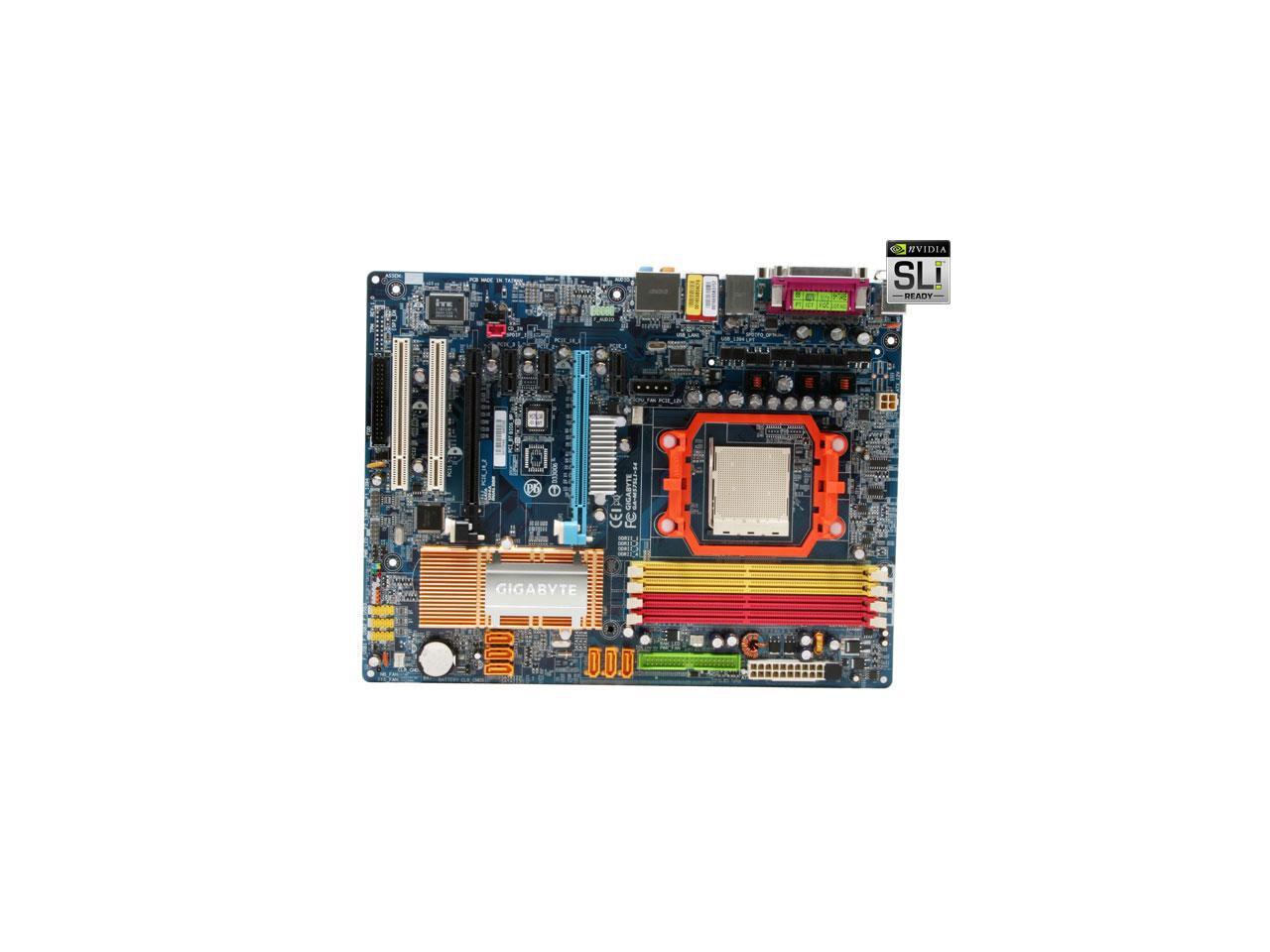 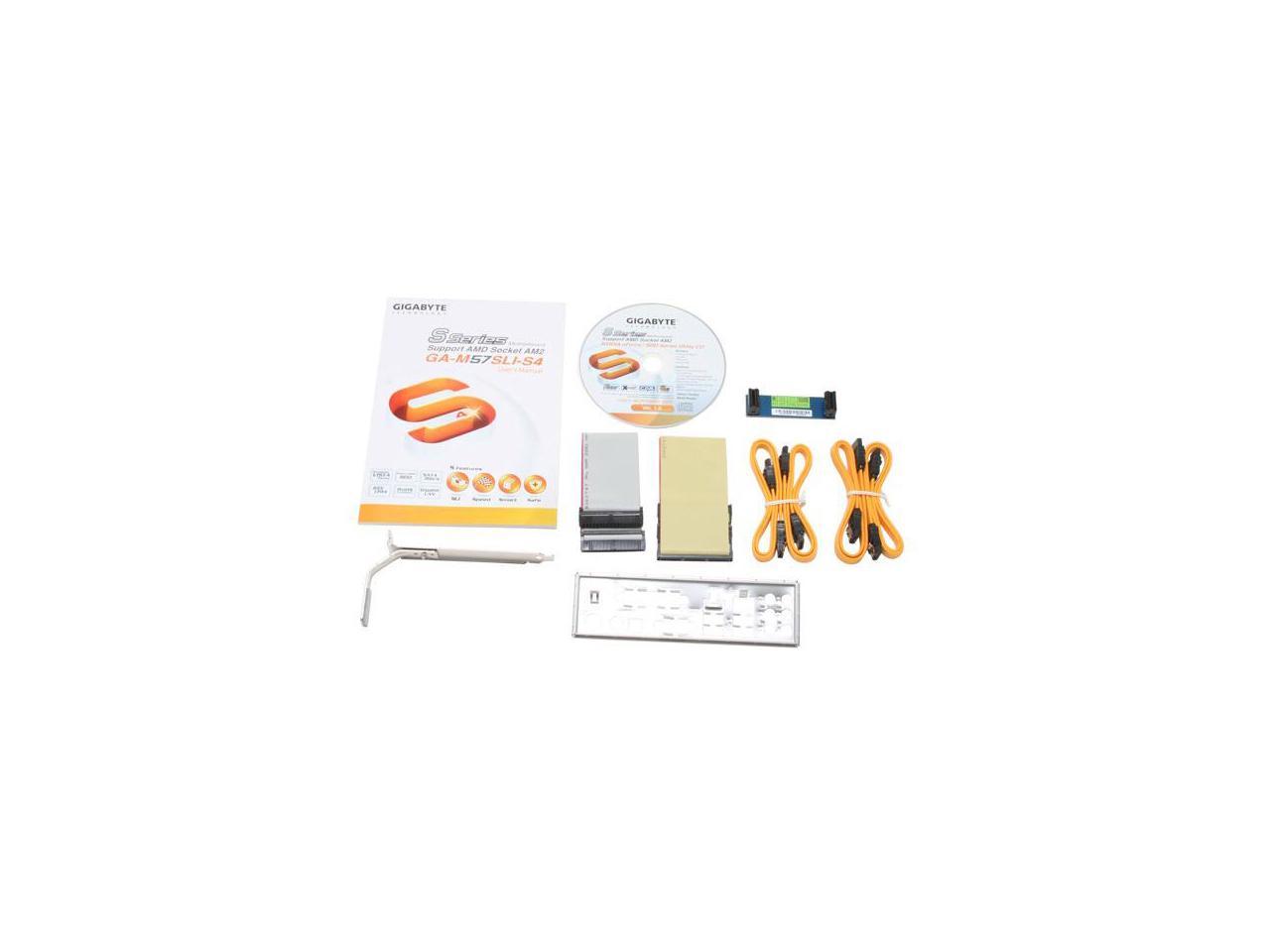 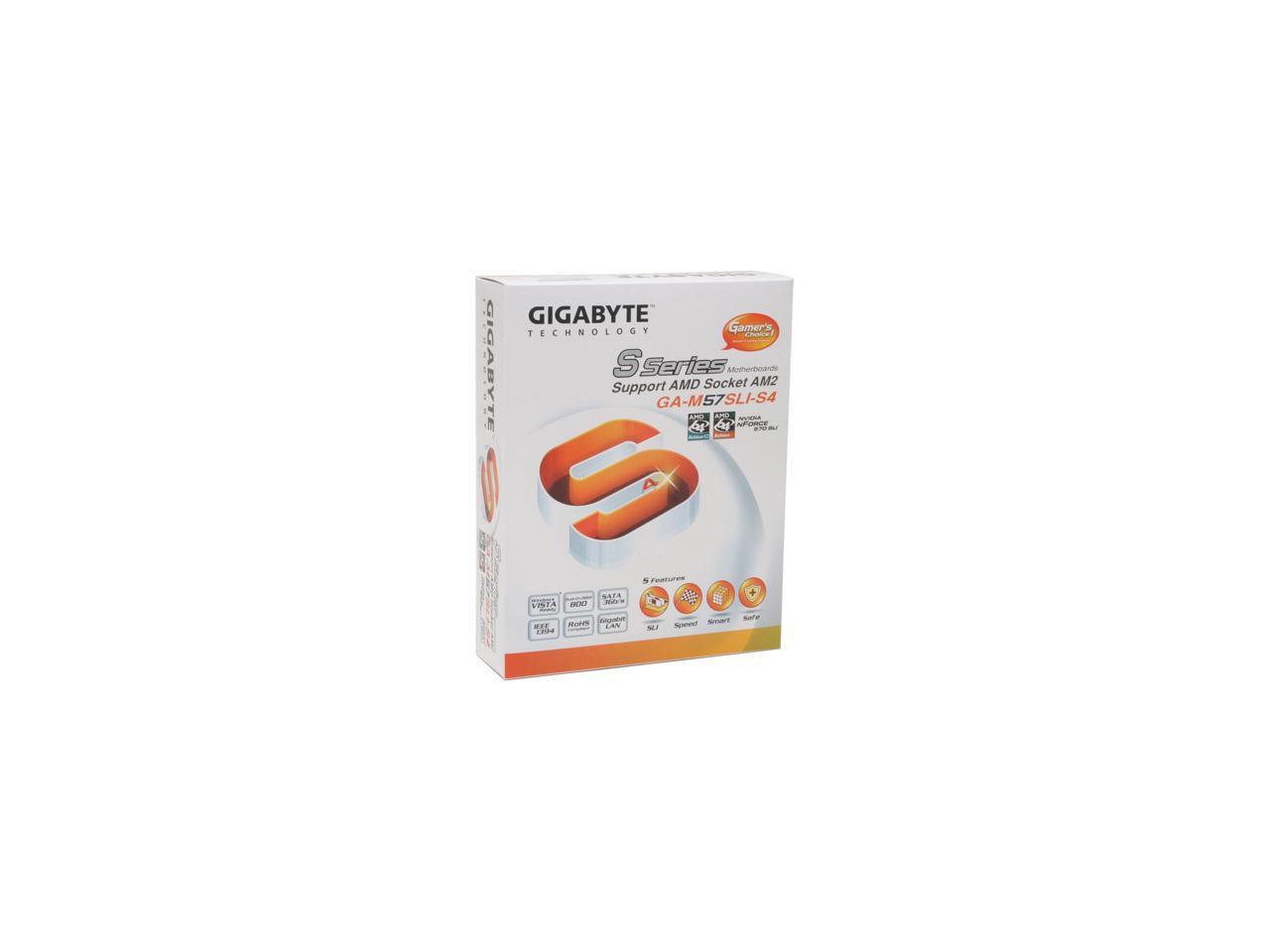 (561) Write a Review
OUT OF STOCK.
Overview
Specs
Reviews
A full featured motherboard with plenty of power, the Gigabyte GA-M57SLI-S4 is great motherboard for anyone needing to replace or upgrade their system. Equipped with an AMD socket AM2, suitable for Athlon 64 processors, including the X2 and FX series, the GA-M57SLI-S4 is more than capable of handling anything you may want to run. Using the Nvidia nForce 570 SLI chipset, it supports SLI, letting you use 2 graphics cards together for even more processing power.
It also includes a gigabit Ethernet port, 7.1 channel onboard sound, and 6 SATA ports. Add multiple hard drives to the system through those two ports. The GA-M57SLI-S4 supports RAID 0, 1, 0+1, 5. It also has multiple expansion slots to use, including two x16, and three x1 PCIe slots, plus an additional two PCI slots. For anyone building a strong, stable system, the Gigabyte GA-M57SLI-S4 is a great foundation.

Learn more about the GIGABYTE GA-M57SLI-S4

Pros: Well marked, layout good overall with no fitment problems (all holes/posts lined up fine). Building a PC involves some guessing and hoping, but thanks to Newegg's specifications tab it was an easy first experience with the Gigabyte in combination with an AMD 5000+ Black and a Cooler Master RR-CCH-L9U1-GP (Newegg #N82E16835103031). Biggest pro is knowing that they (Newegg) has such great customer service. That's the best way to keep my business.

Cons: Not a serious con since it is a function of having such good features, but it's a large board. Trial installation is important depending on placement of your hard drive and other components as they relate to the RAM, fan, chipset, etc. Some components will be extremely close to others. Have patience and plan things out before you start pushing.

Overall Review: If you're reading these then you're building your own system and you may run into this: I was upgrading an old case with this MOBO and the PSU didn't have SATA power cables. Make sure your PSU does, or else you'll need to also order a combo cable to convert the molex plugs to SATA (Newegg #N82E16812226004). I had a couple in a drawer, so it wasn't a problem, but it would be frustrating to have a new system that you won't boot because you can't power your SATA drive. Wow. One sure way to know you're a geek is by having spare molex:SATA converter cables laying around. The other is by knowing/loving Newegg. Embrace it.

Pros: 1.1. I really the like the bios reboot warning when an over clock goes wrong. I really like the ability to be able to Save Previous Bios settings and having the choice to boot from any of the 10 profiles set up. 2. 2. 6 SATA Ports is really generous. Now that dvd/cd drives are cheaper in the SATA dept. the move will be a lot easier due to the 2-3 SATA ports left over from the HDDs. 3.The chipset heatsink is pretty well designed. Does not obstruct the VGA or from running SLI. 4. HD Sound is pretty nifty. Most mobo’s in this price range do not support HD sound, so it was nice to see it in this mobo. 5.Linux Bios. This is actually a brilliant move. The fact that the bios can be written by anyone and be tweaked out is amazing. Most bios are proprietary and are limited; however, not this one. (CTRL+F1 for advance feat.) 6.CD driver install is the best I’ve seen. Once you boot from installing Windows XP, you place the Installation CD and it basically installs all the drivers you need.

Cons: 1.I wish there were more fan 3 pin connectors on the mobo. (Only 2) 2.The Floppy input dock is all the way at the bottom. Seriously, what gives with that? It’s just poor design. However, I know this is not the only mobo company that does this. 3.Most mobo’s now days have dual NIC. I wish this mobo would have had that. 4.The ram slot config. It is better if you have 2 sticks to keep them separated so air can cool of the memory. However, the fact that if you have 2 ram sticks and have to pair them next to each other is not the best move if you are water cooling because no air will go through that area unless you place a fan there or water cool the ram too. 5.Most companies throw in a back USB plate to use with the left over USB mobo connectors. This mobo does not have that.

Overall Review: Do not get me wrong. 4-5 is a very good score. This mobo has a lot of features in the bios and the fact that people write and create a bios for this mobo is amazing. No mobo can be perfect. The short comings on this mobo are basically in design, but not functions. Would I buy another if this mobo went down? Absolutely! I actually bought it because I had to RMA an ASUS M2N-SLI Del. (The chipset would get to 120c and shot off.) So for the price I decided to buy a gigabyte mobo and I couldn’t be happier. I actually bought a Gigabyte 3D Galaxy 2 WC unit and they both work well. (I had to replace the w/c Power pin with the Reset mobo pin and it worked.)

Pros: I'm an experienced builder who normally uses Asus, I thought I would try this board for a change, seeing as how the price was right, I'm glad I did. Fantastic board in all regards.

Cons: None that I can find, to be honest.

Overall Review: One reviewer mentioned problems with installing drivers, I had no such problem, in fact the auto install feature on the driver cd ran smooth as silk. All my drivers installed flawlessly by themselves while I ate dinner! - The board is pleasant to look at, runs fast and cool, and was a breeze to configure in bios! - Highly recommend this board to both novices and expert builders!

Pros: Its a Gigabyte with SLI.

Cons: The two CD's that came with it were terrible. The audio bus driver would not install nor would the ethernet. So download the codec/drivers from Realtek and the chip set drivers from Nvidia and you should be fine. Careful, they try to sneak yahoo tool bar when you use the auto play install. Other reviews were right about the screw holes, it seems its hit or miss on some atx cases. They would have all lined up in an older ATX case I had but the new one they did not, but the board is still snug.

Overall Review: The board itself is good. I'm happy with the purchase and there are a few things that I would change but they are only minor annoyances.

Cons: The chipsets get extremely hot, that's just about it.

Pros: Great board, Set up was easy. People said not to use Drivers on CD but the drivers on CD was same on the gigabyte website. Install was a breeze, plenty of fit for my Zalman CNPS9500. Very fast and not problem yet.

Cons: Am having problem keeping it in SLI, I do not know if this is on Gigabyte side or EVEGA side in contact with them to find out. Driver CD does contain a "Yahoo" toolbar spyware be warned.

Pros: Everything worked right out of the box. No firmware updates required, no tweaking the BIOS necessary and did not have to swap out RAM / mess with which slots they went in. Fairly stable when using. Works well with Linux / Ubuntu - no special drivers needed.

Cons: Doesn't detect keyboard while booting up (good thing I haven't needed to get to the BIOS), crashes occasionally, when shutting down completely have to restart the power supply to get it to boot back up.

Overall Review: Happy I switched to this board after running a different motherboard that was a huge pain to setup.

Pros: Wonderful Mobo! Good layout, easy overclocking. Skimming through the manual it seemed informative enough *which has directions in many different languages. However I'm experienced enough to not need it (still a good reference if your rusty). Installation was simple and easy. Comes with SATA cables for all 6 of the connecters on the mobo (3.0Gb/s which is another plus). It also includes the SLI bridge (which you don't always get with some mobos). I was surprised by the quality of the onboard sound, make sure you install the drivers correctly, it requires the UAA bus drivers (included in the bundled software). I would highly recommend using the updated drivers found on gigabytes website. Simply search "GA-M57SLI-S4" in their product search and you should be able to find them among other useful information.

Overall Review: The overclocking features on BIOS side are only really voltage levels from what I can tell however the software included with the mobo includes an easy to use overclocking program where you can set: The CPU's FSB, Voltage, and Ratio. The Memory's Freq, and Voltage. The AGP/PCI-E Freq, and Voltage, and the PCI's Freq. Overall a really good mobo. I'm really quite pleased with the purchase and I would recommend it to anyone. I've had this thing for 7 months now and I love it! My system specs: AMDX2 3.2ghz 6400+, 4Gb (4x1Gb) G-Skill DDR2 800 Ram, Nvidia Geforce 9600GT, WD Caviler 640gb 3.0gSATA.