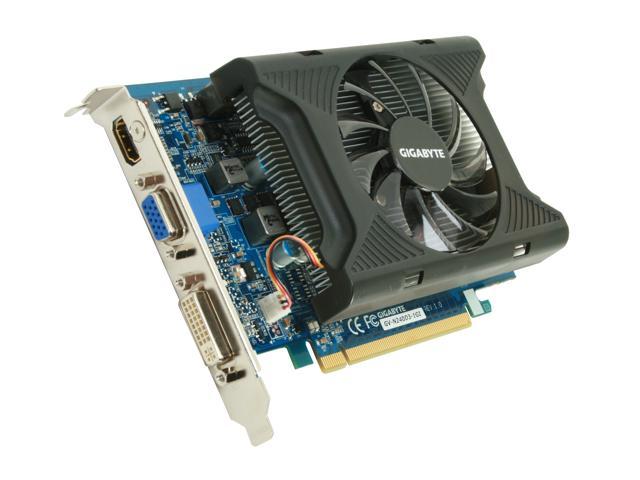 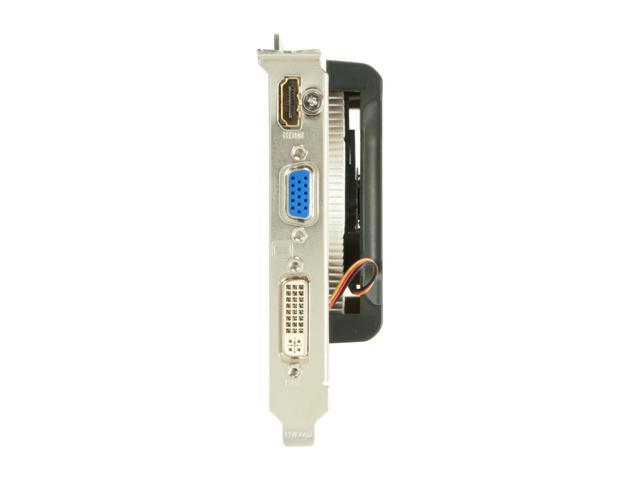 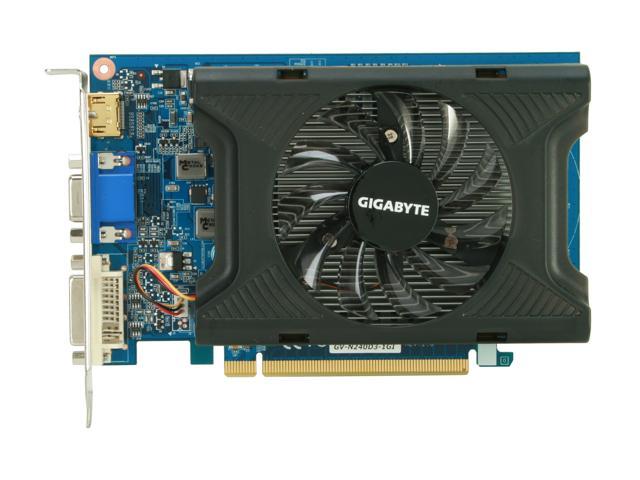 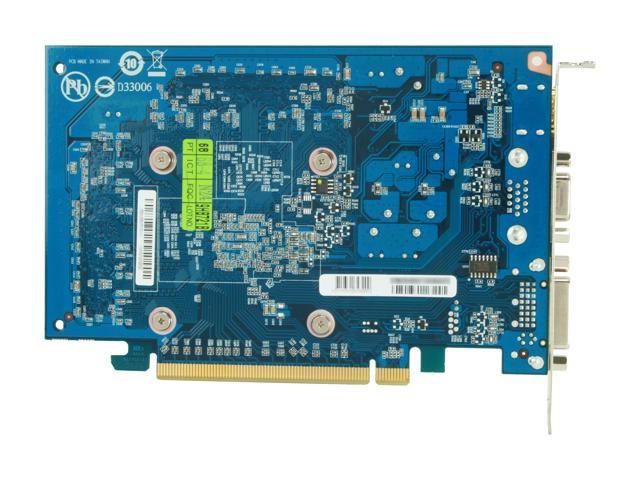 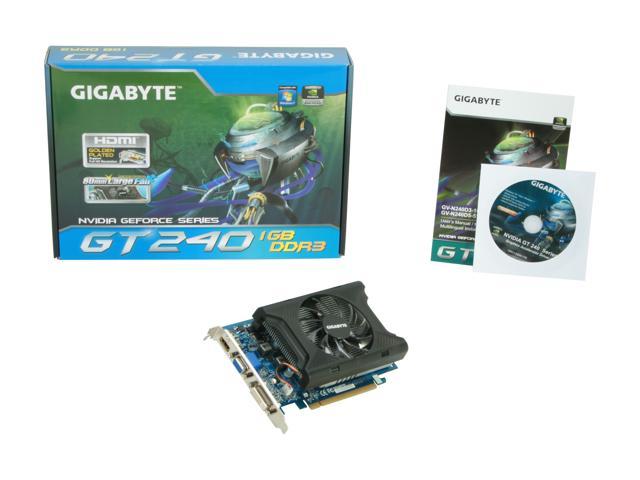 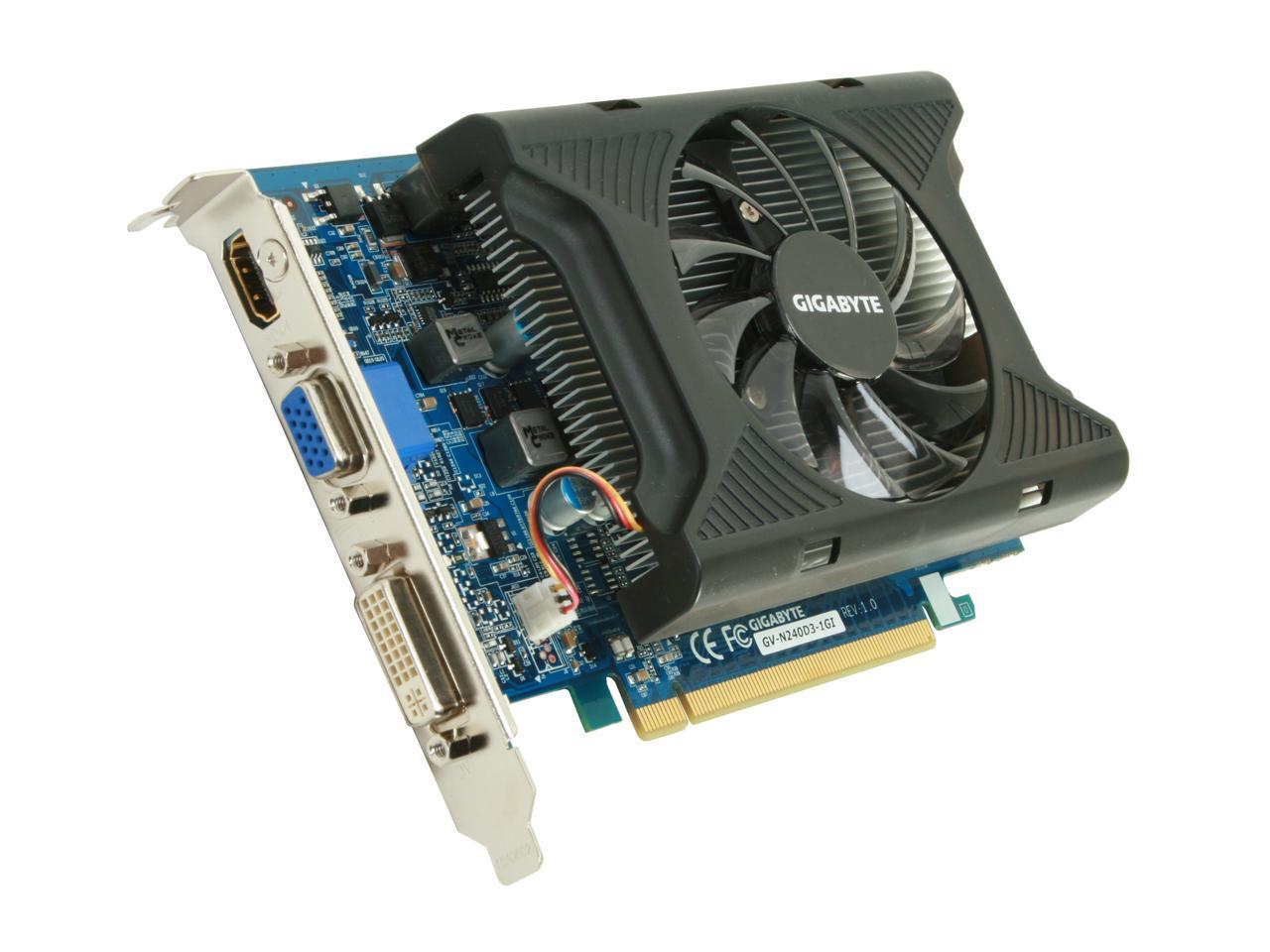 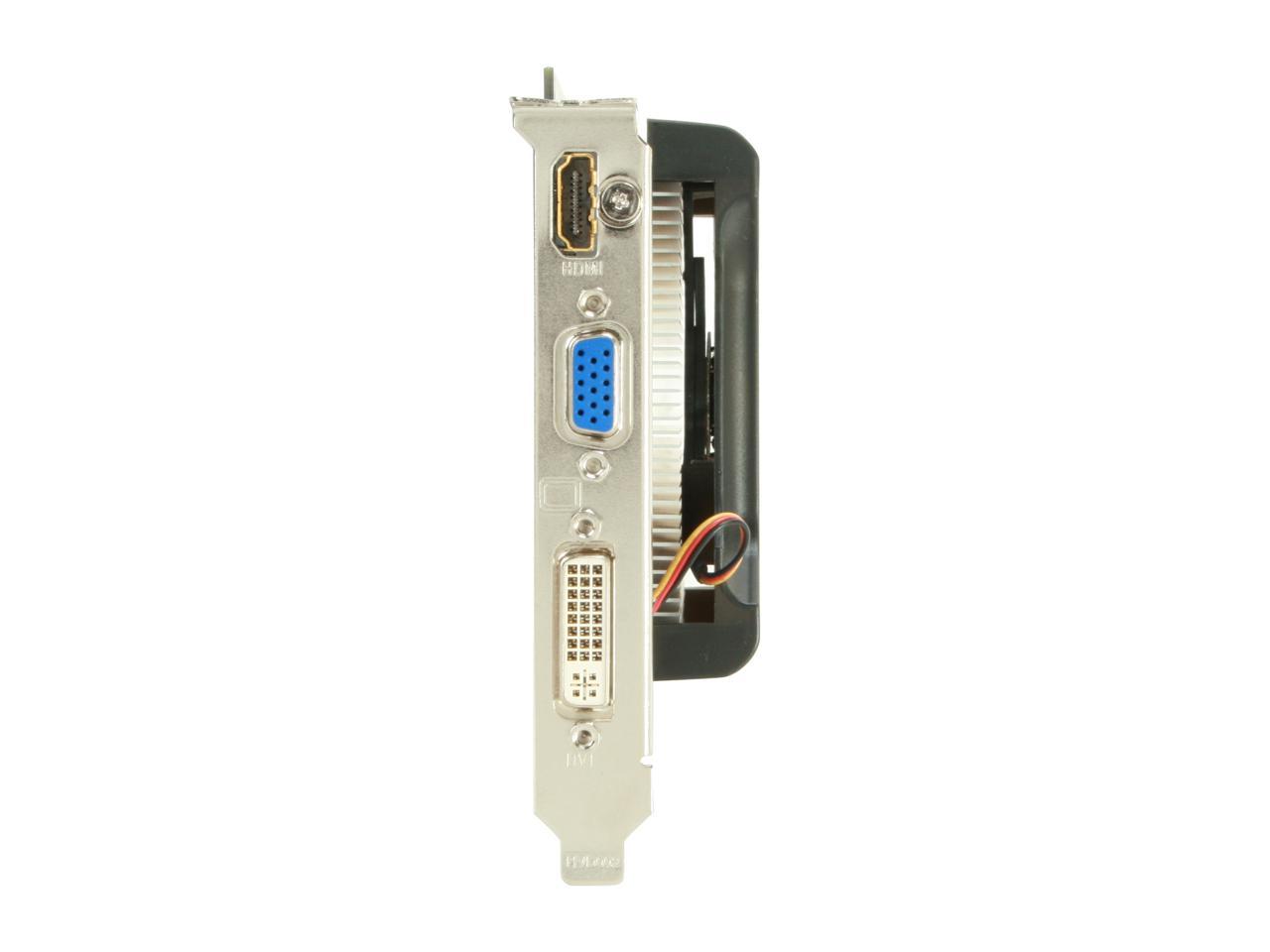 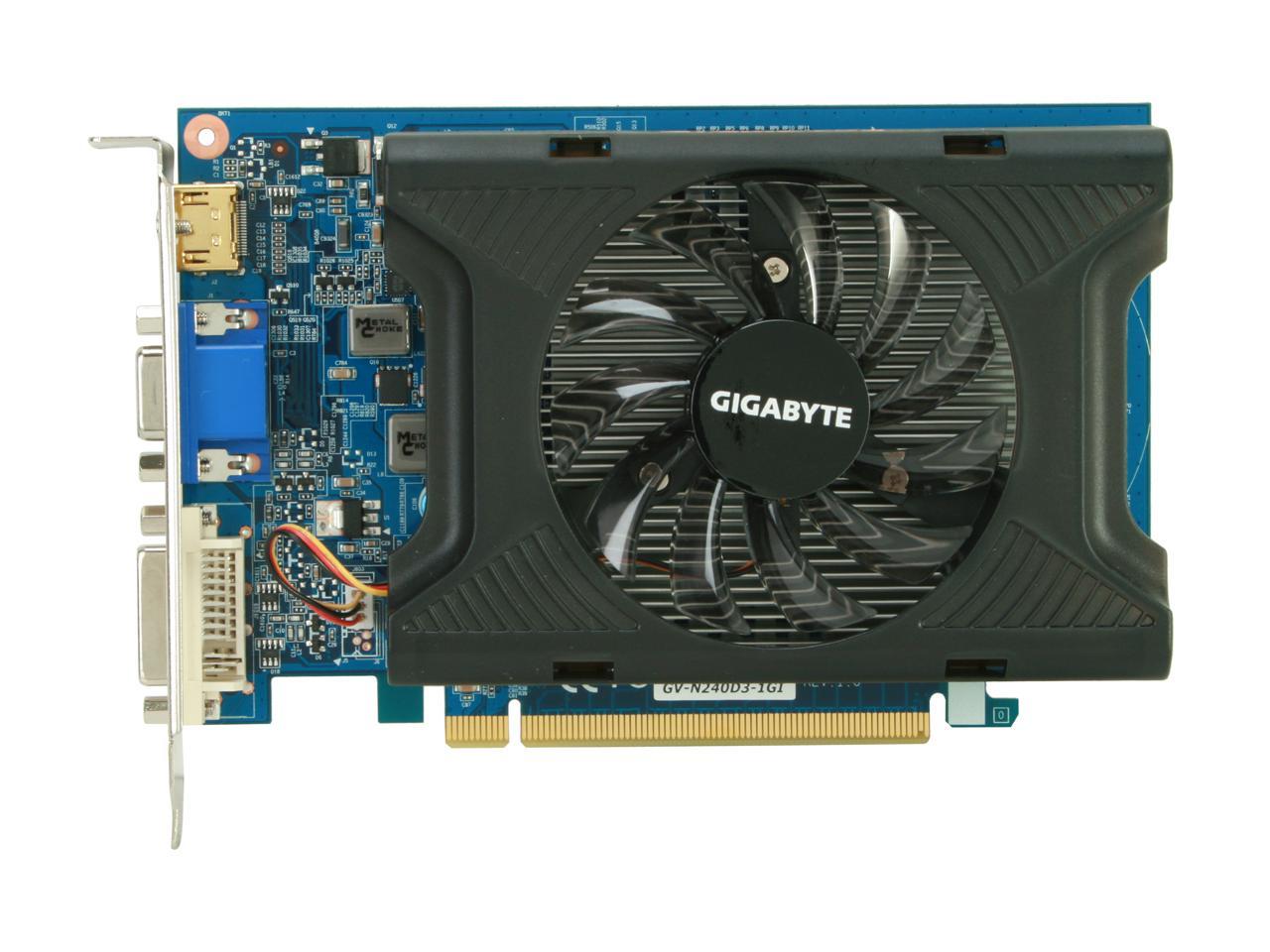 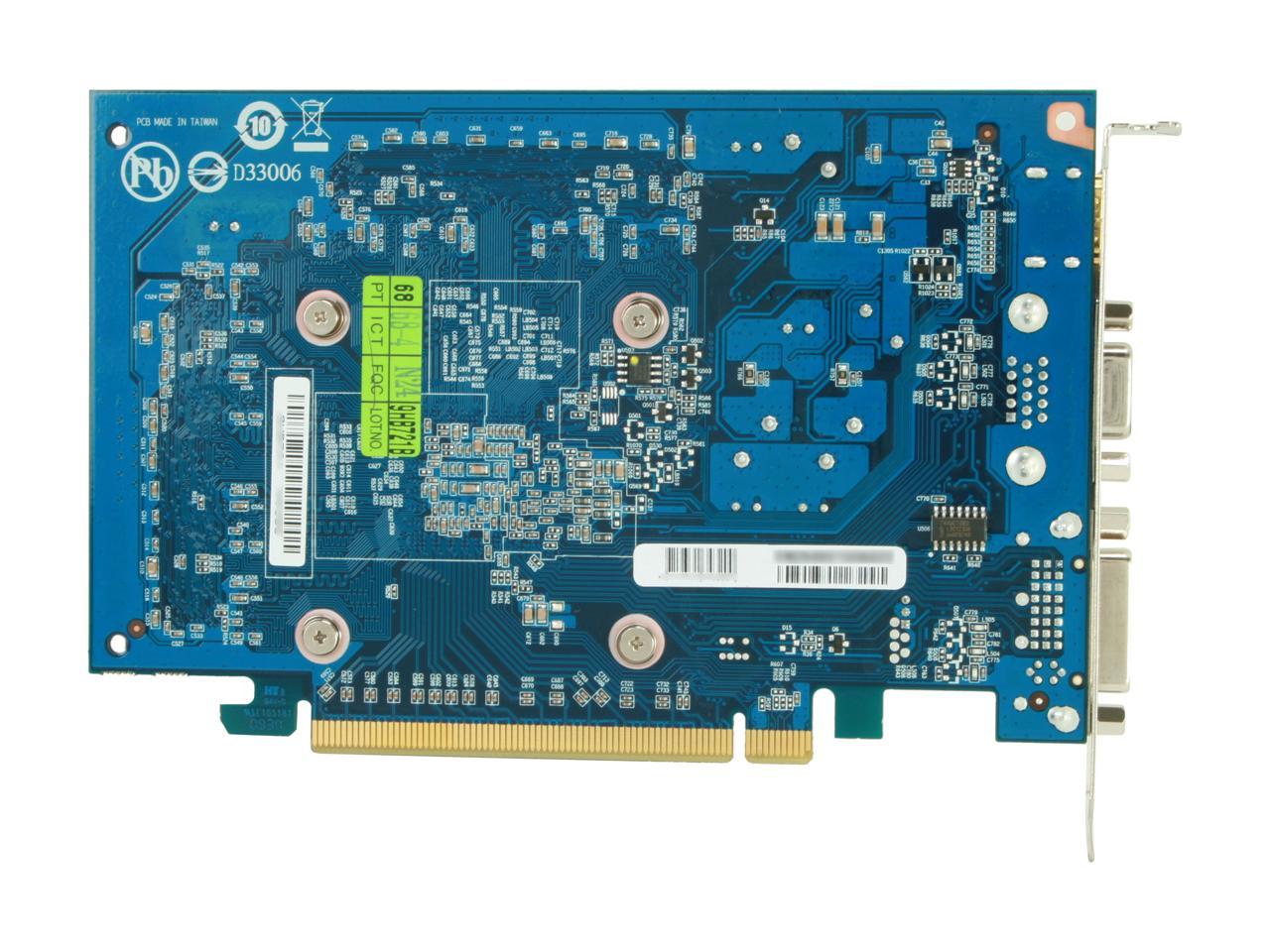 Learn more about the GIGABYTE GV-N240D3-1GI

Pros: Some reviewers say that a card is junk just because it can't play the most graphic intensive games. That is like saying a server is junk because it does'nt do well with games. If you have a high end card with weak drivers that make it worthless, now that is a problem. I got this card for it's native HDMI , and drivers that will allow me to use it with my HDTV. I had a Radeon 4770 , and it did not pixel map 1:1, just made it my TV's problem , and mine. This card works fine with my Sony Bravia XBR6. Fonts are razor sharp with no blurring. I do some gaming, and have only noticed a very slight slowdown with one , but all the others are fine. If you watch a lot of movies and videos like I do ,and surf the webb, then this card will be a pleasant surprise.

Cons: * not for intensive high end gaming * GDDR 5 version is faster (but hotter)

Overall Review: Sure , ATI might have great hardware, but their drivers leave much to be desired. Get the card thats RIGHT for YOU , and your needs.

Pros: ~Reasonably priced ~Easy install; took less than 10 minutes (5 of those minutes were used putting the PC back in the cabinet, and fishing around to reattach the cables)> ~No additional power cables needed ~This video card performs as designed ~Nvidia supports the Linux community by providing drivers that work

Cons: I can find no fault with this card... For my use (office applications, occasional audio, video, picture editing, web development, etc) the GV-N240D3 is perfect.

Overall Review: Sun Oct 10, 2010, 10:51 PM, The GV-N240D3-1GI has been installed in my desktop for a little over 24 hours; and has not even hiccuped. Recently, my 6-year old Windows XP box gave up the ghost. So, I decided to migrate to Ubuntu Linux. On Fri Oct 1, 2010, I built a new desktop from the ground up, with the following parts (all supplied by NewEgg, and shipped really fast): ~GIGABYTE GA-880GA-UD3H ~AMD Phenom II X4 965 BE ~Seagate Constellation ES ST3500514NS ~G.SKILL Ripjaws 4GB (2 x 2GB) 240-Pin DDR3 ~LITE-ON 24X iHAS-324-98 SATA DVD Writer While Ubuntu 10.10 Maverick Beta worked perfectly on the parts shown above, I installed the GV-N240D3 after upgrading to the stable release of 10.10. After installing the GV-N240D3, Ubuntu asked if I wanted to install the Nvidia driver... and away we went. I was surprised at how simple, straightforward, and error-free it went. Linux has gone mainstream on the desktop, and the GV-N240D3 works perfectly with it.

Pros: Nice card love the low power consumption a great card for those who have a 300 PSU and up. Much more quiet than my old 9600GT and a heck of a lot smaller.

Cons: Should have bought two.

Overall Review: I did not need a super card since I don't game. Most of my work is done in 3D art and rendering Vue, Poser, C4D and this card is excellent for that. Really wish a little more focus was given to people like me who do 3D art and rendering and not so much to games there are other things done with PC's then playing games.

Pros: Does okay with Crysis at High settings, I bumped down to Medium at 1650x1280 for higher frame rate.

Cons: Wish I had payed more for a better card

Pros: 1Gb ddr3 on board memory,HDMI out,

Overall Review: I'm not a gamer,unless polar bear bowling counts so I can't comment on that, but for monitoring HD video editing on a 22" and a 37" HD TV at the same time,it works great.

Pros: Quick easy install. Quiet card. I am able to play all my games at the highest resolutions with this card. Best card I have ever purchased for less then 100$. Doesn't need a connection from power supply ( this was a huge factor since I didn't have the cash to fork out for a new PS and a vid card ).

Cons: Drivers on disc are junk for win7 64bit.

Overall Review: Upgraded from a 7800GT and it was a nigh and day difference. I am running a Duel Core AMD system with 2 gb ram and win7 64. The drivers included on the disc were junk. Download the latest drivers from Nvidia and it works like a charm.

Pros: Works Great As A HTPC Card. Works Very Good. While Playing 1080i It Barely Gets Moving. Near Silent. Highly Recommend.