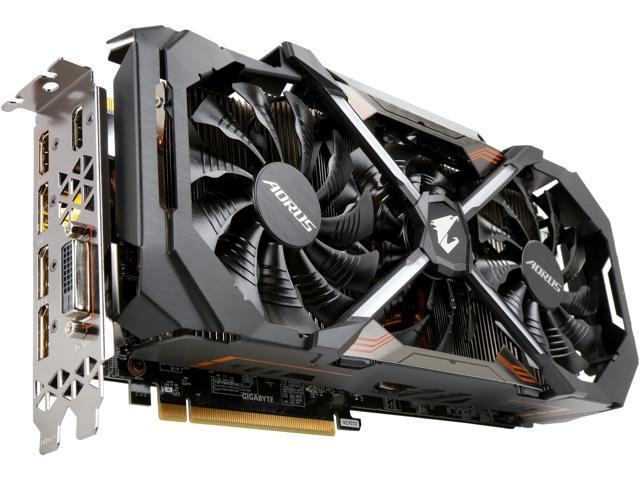 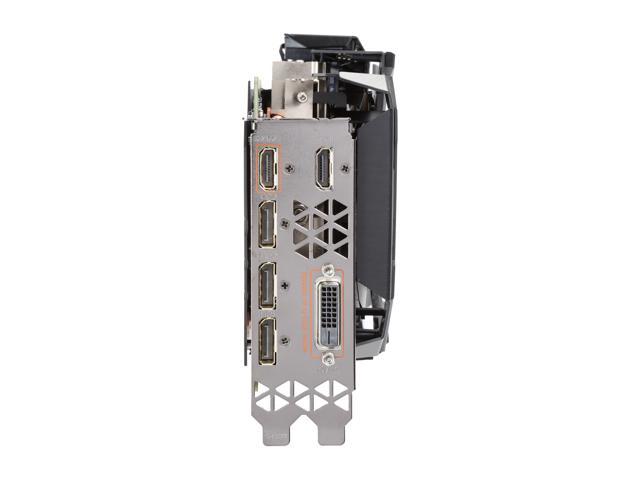 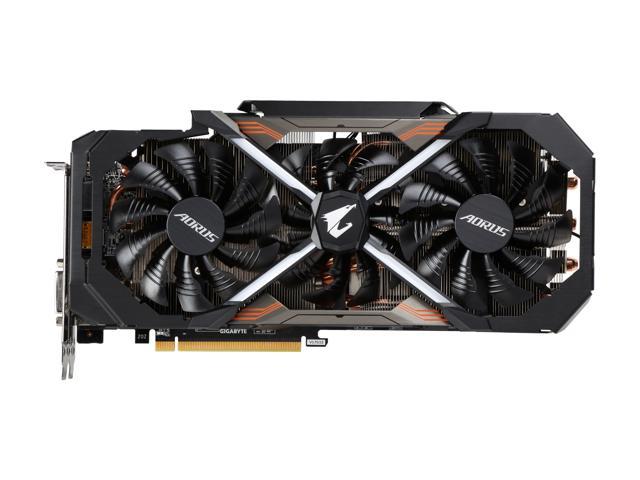 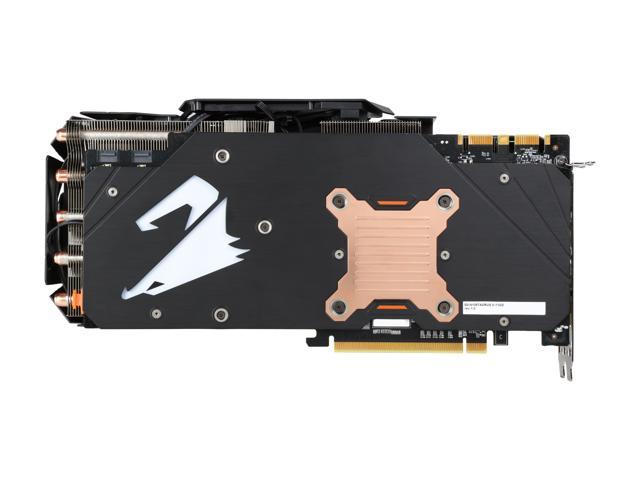 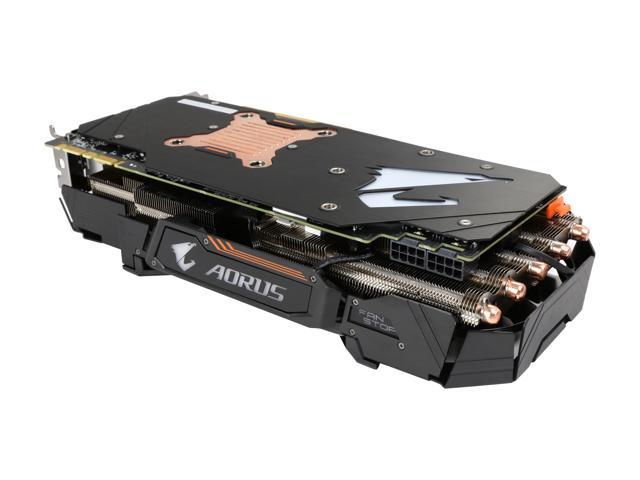 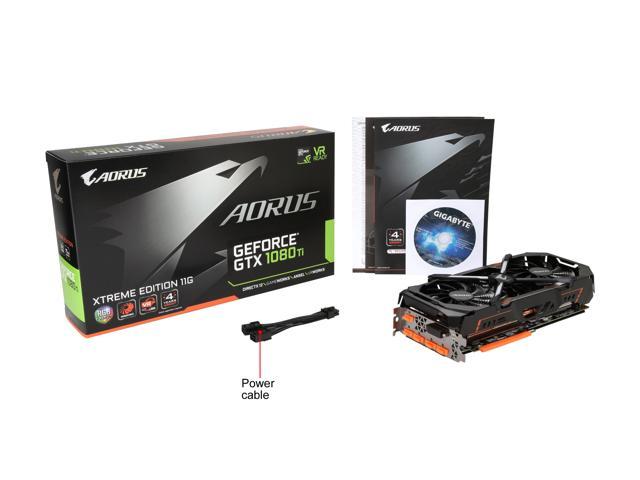 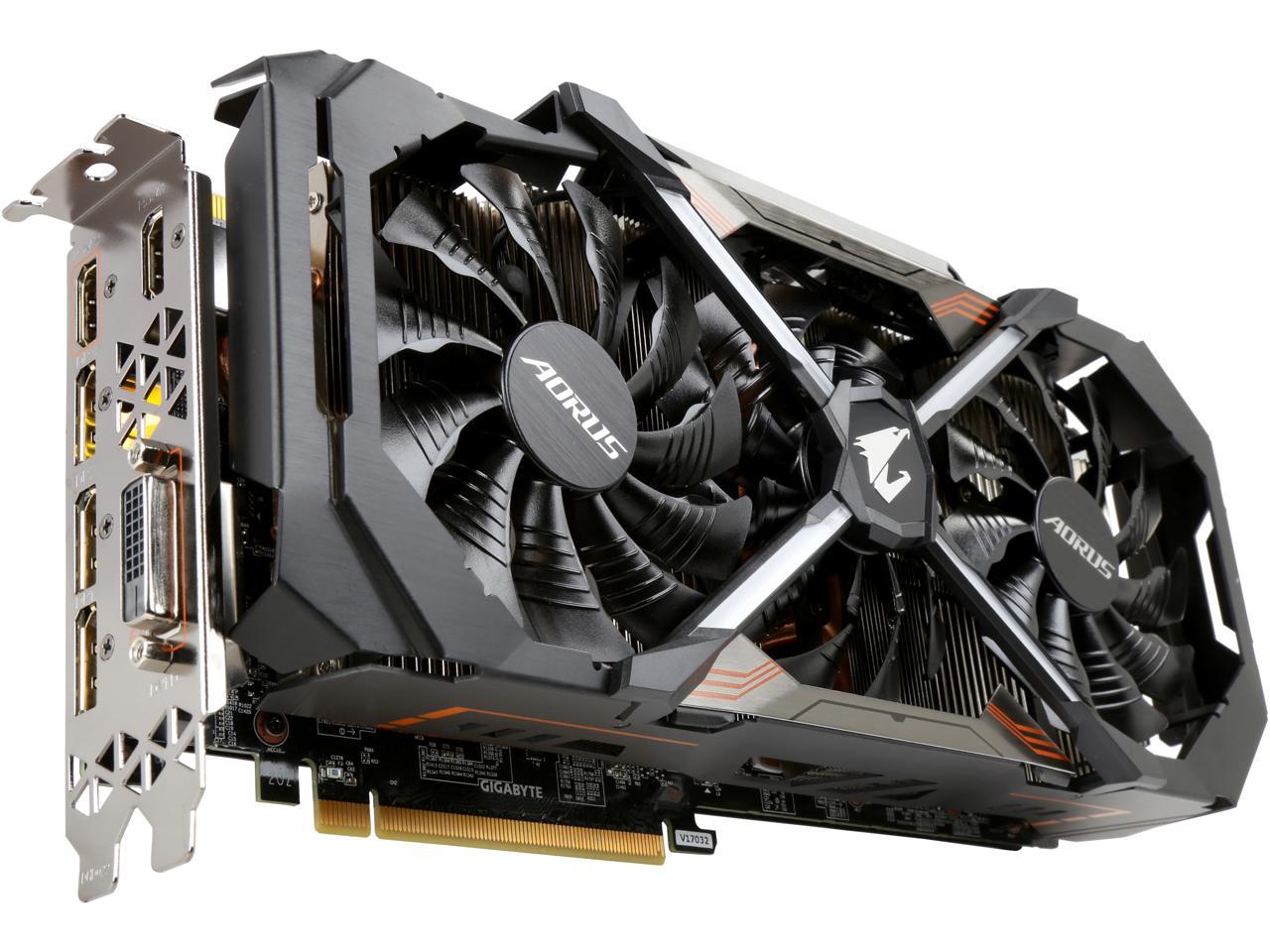 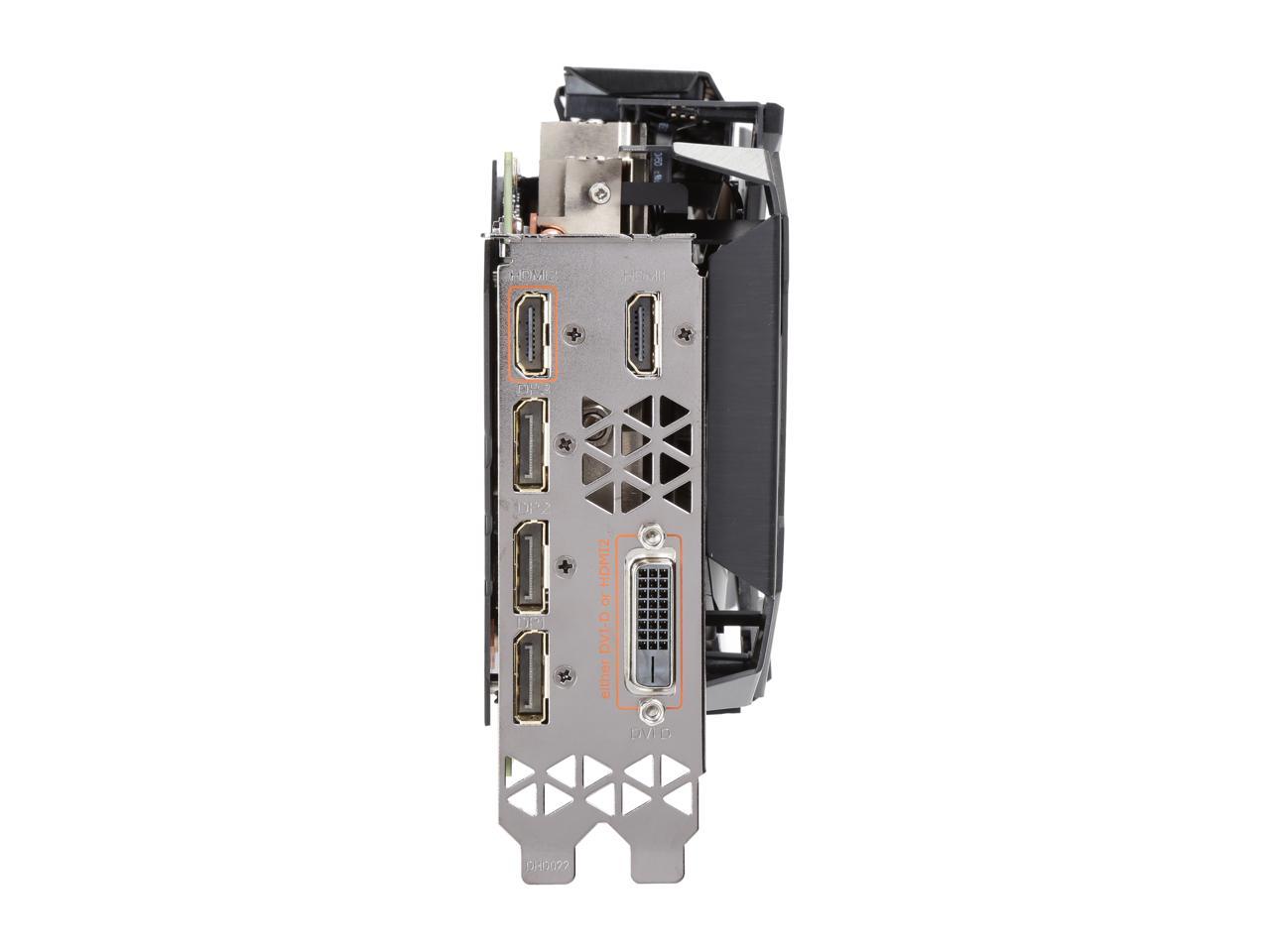 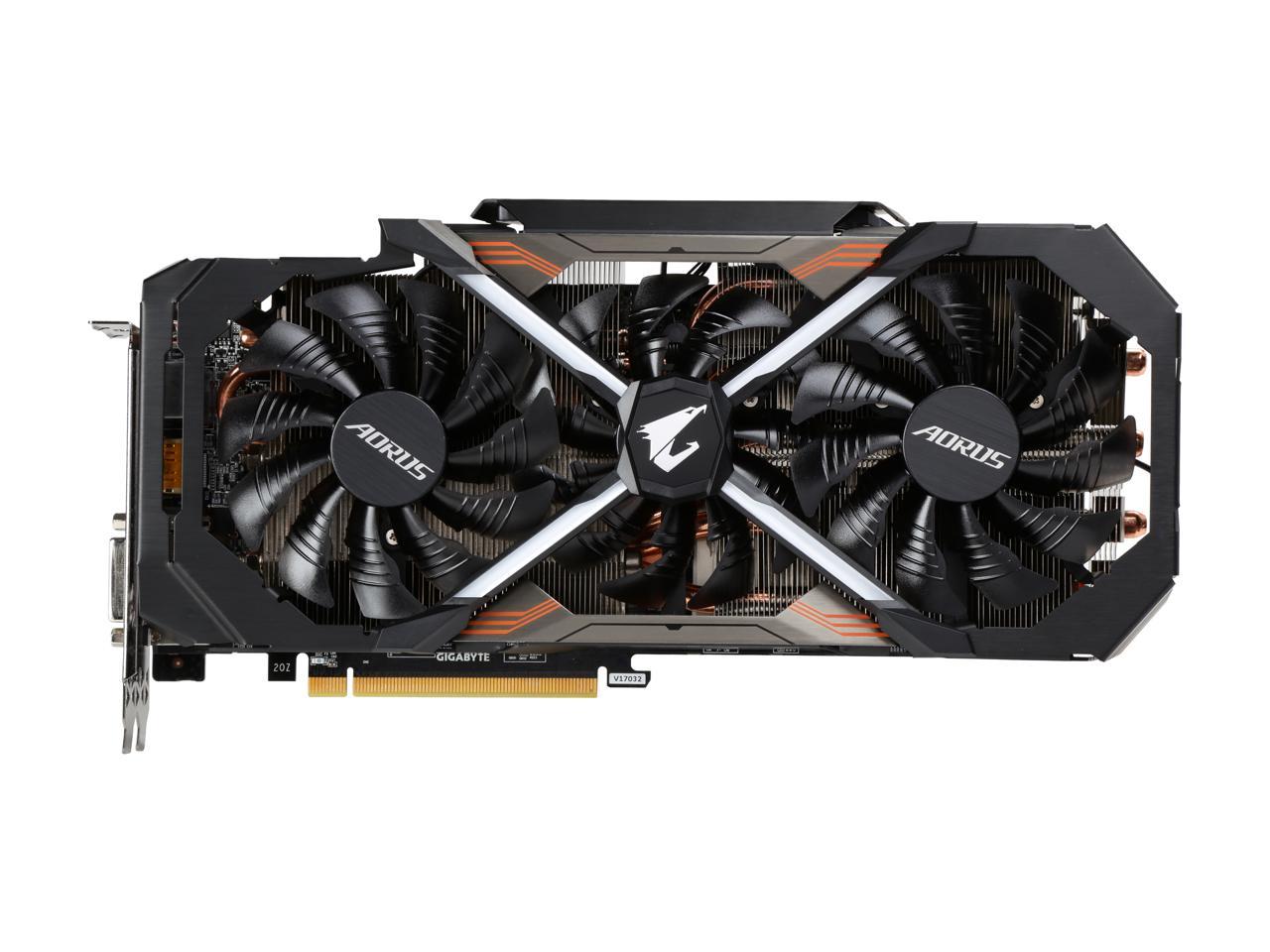 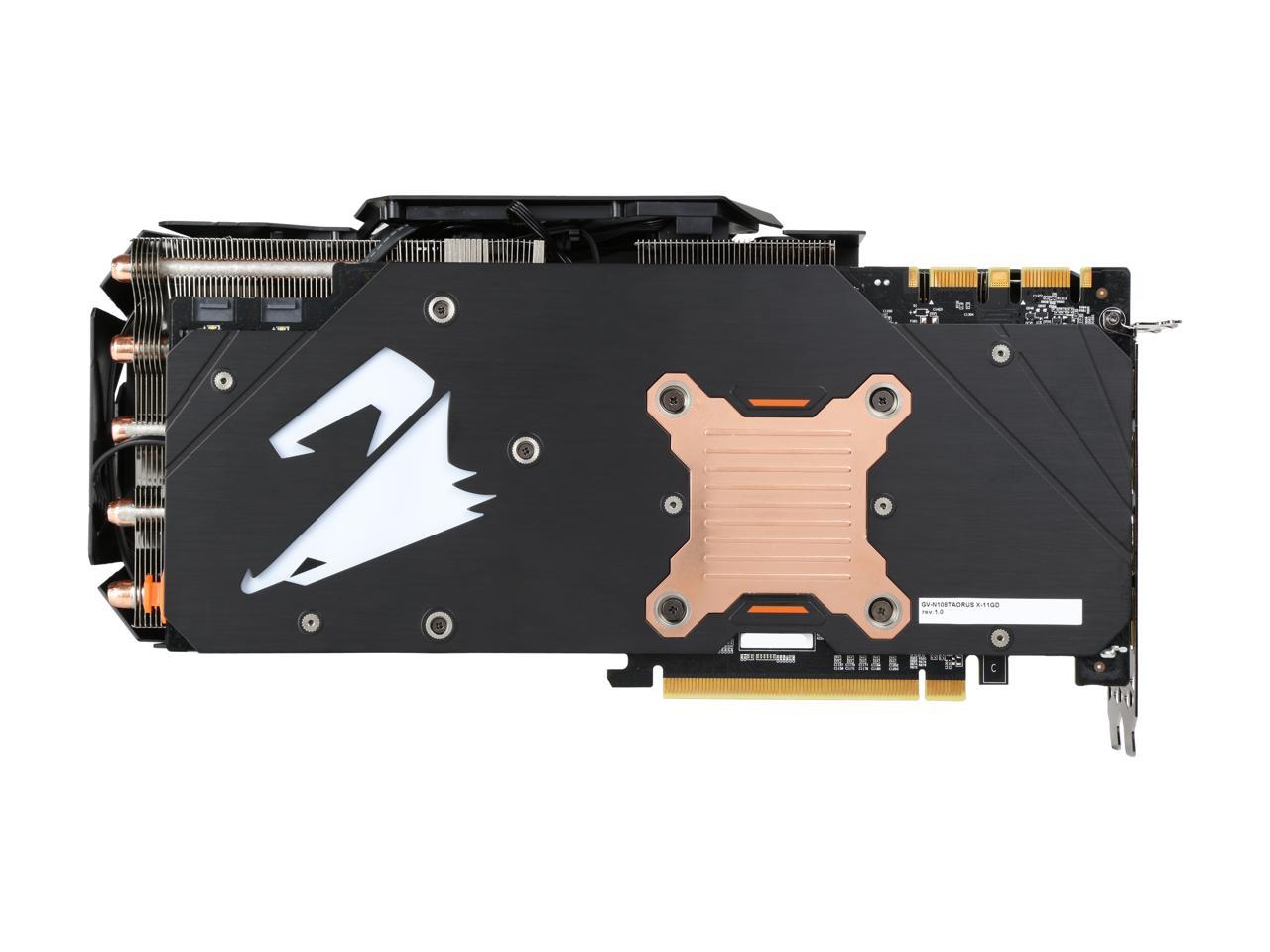 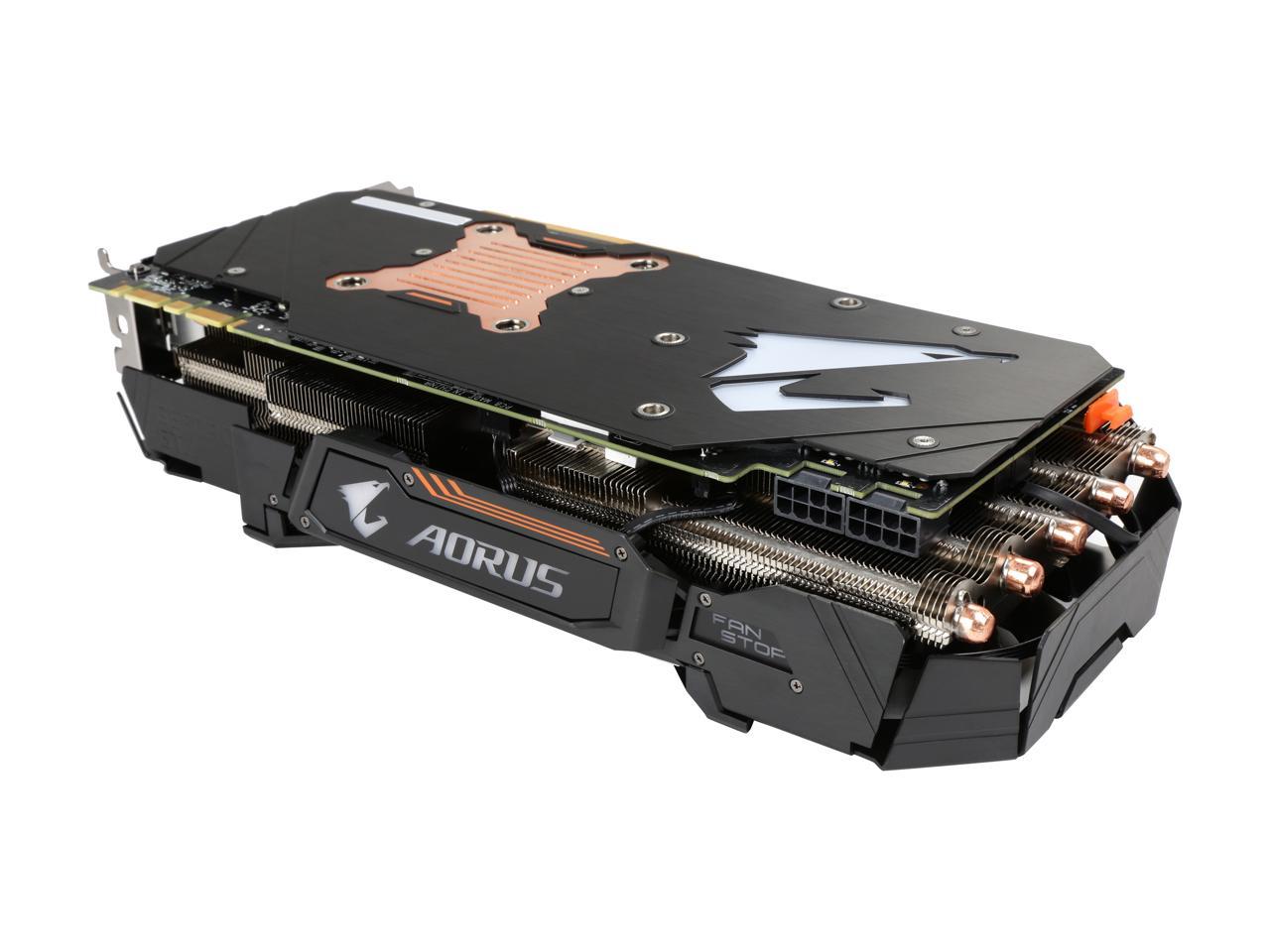 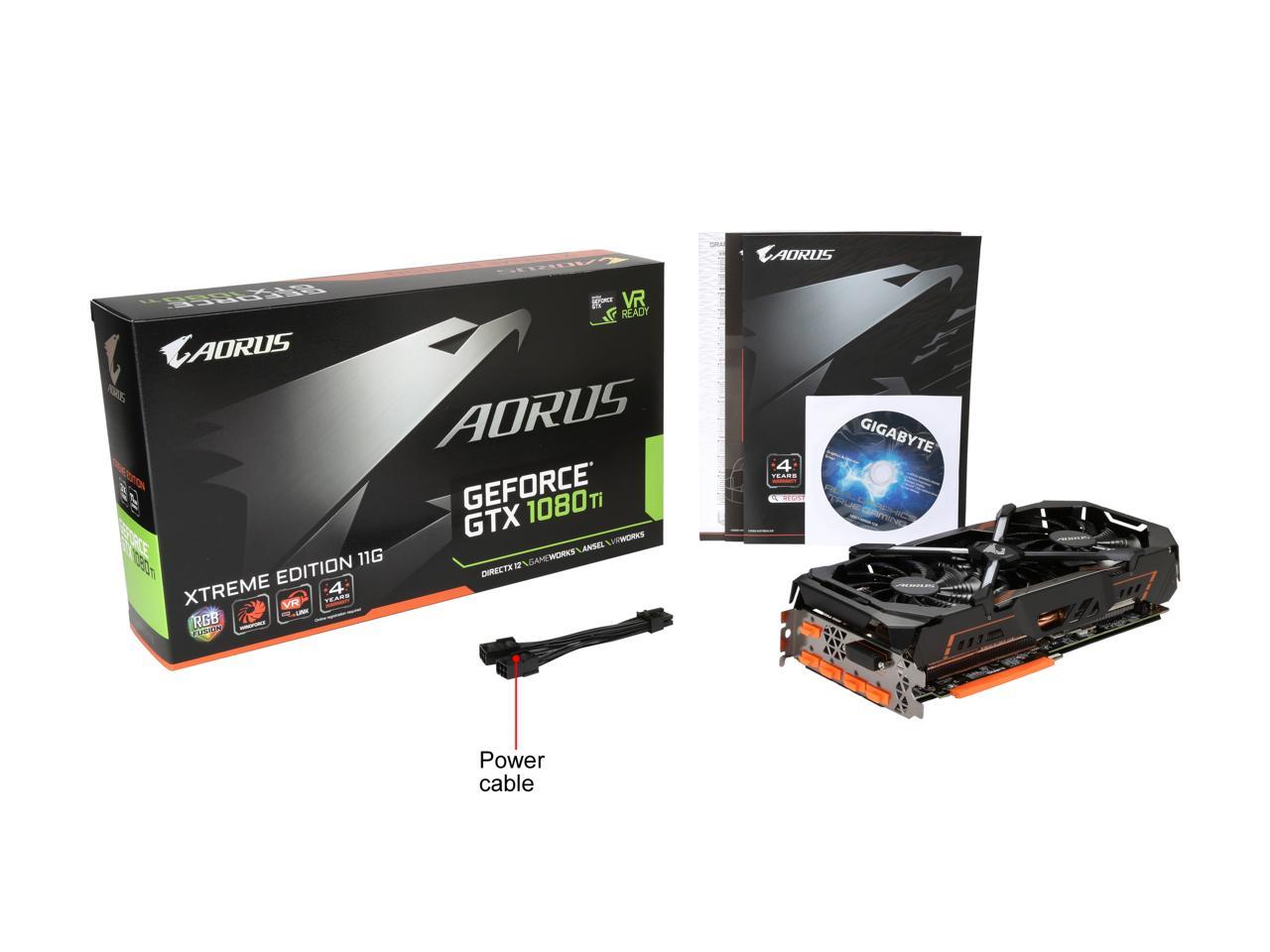 AORUS provides the all-around cooling solution for all key components of the graphics card. We take care not only GPU but also VRAM and MOSFET, to ensure a stable overclock operation and longer life. On the front side, the large copper base plate dissipates the most heat from the GPU and VRAM. On the back side, the copper back plate dissipates the heat from the GPU back side. All other key components are taken care of very well by the WINDFORCE cooling module. AORUS ensures the customer a better cooling solution in many ways.

With direct contact to the GPU and VRAM, the large copper base plate combines the composite heat pipes to efficiently transfer heat generated from the interior cores to the heat sink. Make 3x 100mm stack fans into less than 300mm length area. To concentrate and enlarge the airflow on the whole heatsink for the most efficient heat dissipation.

The middle fan spins in the reverse direction to optimize the airflow to dissipate the heat more effective for accomplishing higher performance at a lower temperature. The airflow is spilt by the triangle fan edge, and guided smoothly through the 3D stripe curve on the fan surface, effectively enhancing the airflow by 23% over the traditional fans. With the better system airflow, the direction of the copper plate will help to increase the cooling performance. The angular and unequal fins height does not only channel the airflow through the fins and enlarge the contact surface but also results in a lower noise level and better cooling capacity. SO EASY TO VR

AORUS VR Link features 1 extra front-facing and 2 rear HDMI ports, letting you connect a VR device and up to 2 HDMI monitors at the same time without having to swap cables, so you can flexibly set up a display configuration that best fits your gaming needs. AORUS VR Link is the only output technology in the market that supports the following combinations of displays without any adaptors required. (VR Headsets are connected via HDMI) Glorious black metal back plate provides the solid protection, strengthens the structure and inspires the passion for gaming.

Dust -resistant shields the circuit board from dust, insects, dropped screws, drill shavings, and abrasion.
Moisture-resistant prevents unwanted conduction paths and board damage.
Corrosion-resistant protects boards from environmental contaminants, such as salt spray, humidity, and corrosion.
*The photo is for illustration only. Be alert when PCI-E voltage is unstable with the smart power LED indicators. When experiencing any power abnormality, the indicator will alert gamers by flashing light.
*The photo is for illustration only. Compared to the reference design, the 12+2 power phases on the card make the MOSFET working at a lower temperature and provide more stable voltage output. Over temperature protection and load balance to each MOSFET can effectively extend the card life.

AORUS Graphics Cards are engineered with the same highest-grade chokes and capacitors as those of Titan X, delivering high quality performance and longer system lifespan. Clock speeds, voltage, fan performance, power target can be monitored and tuned in real-time according to your own preference through this intuitive interface.
(*The interface and functionality of the software is subject to each model.)

Overall Review: Upgraded from an ASUS GTX 1080 there is honestly a big difference between the two via performance. If someone is short sighting the gtx 1080 ti upgrade they are wrong

Pros: I honestly think this is the most underrated 1080 ti to be released. It (so far) has the highest clocks out of the box, has more ports than any other card, and runs cool! I popped this in before work and didnt get much use in terms of stress testing, but so far it looks great and is quiet. I will edit my review when I do some more stress testing at 4k.

Cons: It's a little bulky but that is barely a Con for me.

Overall Review: Yes in terms of price for looks and performance this is a great alternative to Asus Strix and MSI Gaming X. It rivals the performance of both those cards as well. I would definitely recommend it.

Pros: -fast as you would expect, plays all games with ease at 1440p above 60fps with details maxed out, only exception is ghost recon wildlands, it dips below 60 fps with max setting in some areas with heavy vegitation but really smooth in others (agian at 1440) -keeps really cool during gaming and the fans are really quiet, never hear it during games in my Corsair 540 mid tower -looks are pleasing to me, more so with the RGB backplate and other areas -achieved a 21 600 fire strike score with light overclocking -4 year warranty with registration -Aorus graphics engine software is not bad, been using it to overclock and has a few preset profiles to choose from, also is used to control the leds Absolutely no problems with this card out of the box, haven't heard any coil whine so far and has run like a dream

Cons: Not a con for me but as others have said this thing is massive, so make sure you have enough room below this card

Pros: Faster than the ROG 1080 ti Copper heat pipes and copper top and bottom gpu heatsink Software work well for me even though people were saying it acted "buggy" Fans had no problem, and didnt hit the housing and not noisy at all Idles at 27 degrees, and jumps to 62 while running oculus rift games. Fans on manual at 85%, ran an 9 hour gaming session.

Cons: It is quite big at 3 card slots. i bought a Atlas Brace for it to help with the sag. Problem is that the brace is two inches too short for the card. GeForce Experience software...just download the drivers from Asus instead of trying to use this.

Overall Review: Make sure you system has good airflow, with a big card like this moving the hot air out of you system is key.

Cons: Gigabyte pre packaged software was buggy. Guaranteed crashing in OC Mode and intermittent crashing on gaming mode. They released a "beta" BIOS that was supposed to fix problems but actually made the card perform much worse. (They also supplied BIOS updates only for people using HDMI or DVI-D) Crazy how my 970 strix never faced similar problems. This card was tested in two completely different computers on fresh installs. Yikes. Fingers crossed for round 2

Cons: -week metal outer covering, it got bent and was blocking fan movement

Pros: - Ultra powerful. I'm playing the latest AAA games at 3440x1440, maxed out, with little to no discernible lag. I'm playing on a G-Sync monitor. - I love that this card stays cool. It consistently puurs along below 60 degrees, and then may bump up to mid to low 70's for the heaviest gaming workloads and max overlcocks. It appears very reliable. - It's a rock solid overclocker. I.e. it stays cool and collected. Ive added 55 Mhz to the GPU and 340 Mhz to the RAM. - It's awesome looking with a metal housing and cool LEDs. - Very quiet.

Overall Review: - At roughly $50 over the FE, this card is an absolute no brainer. You're already spending $700...pay $50 more for a silent, more powerful alternative.

Overall Review: - The biggest card I've owned. Pay attention to the dimensions if you have anything but a full ATX board and case. - Definitely the best of the 1080 ti given the 4 year warranty and out of the box specs. *UPDATE* Card runs great but seems to have conflicting software for fan control. The MSI afterburner might cause issues and create instances where your fans will throttle between 0-20% and cause the chip to overheat. I already suspect that my system crashed in idle due to this bug.