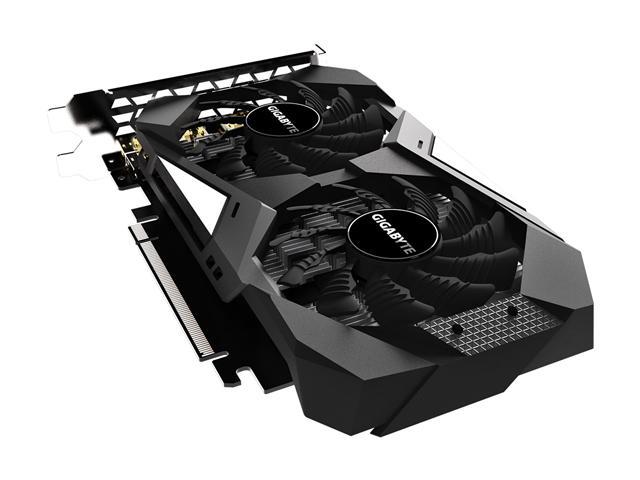 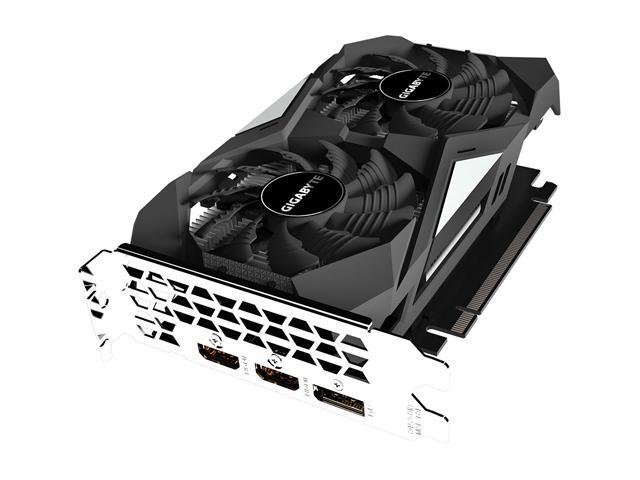 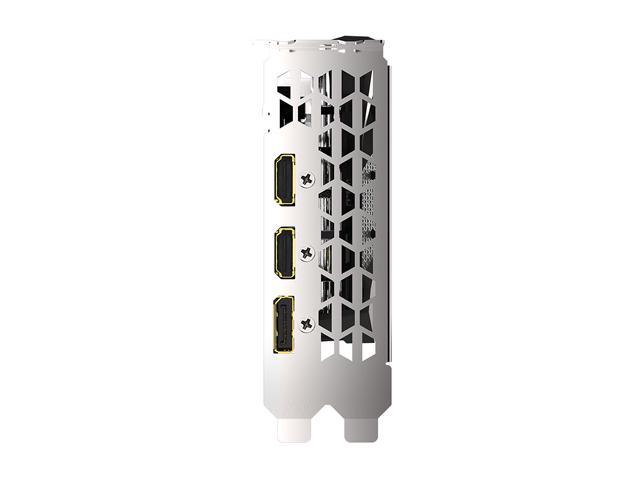 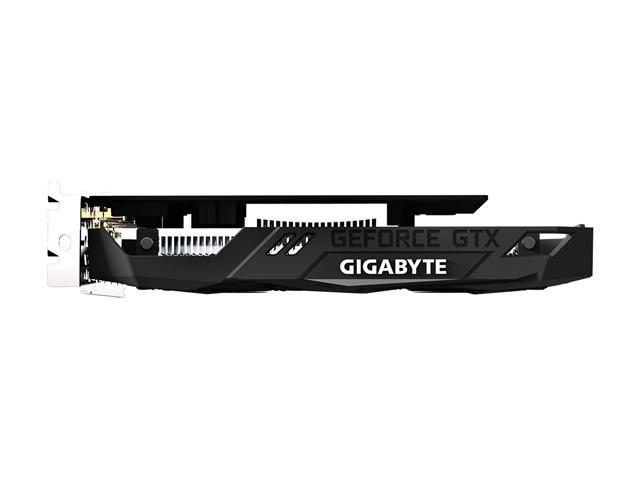 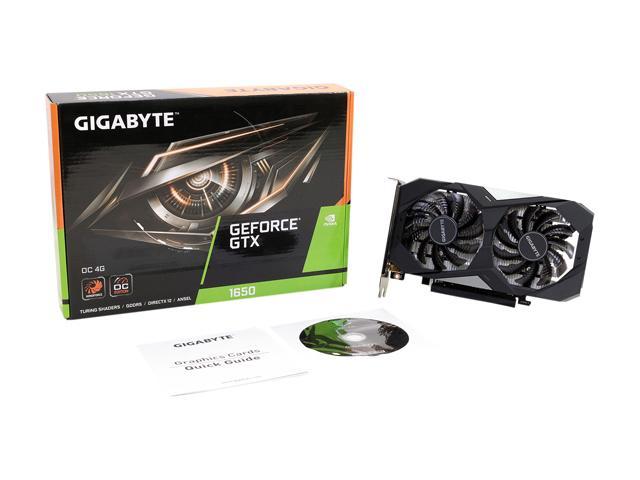 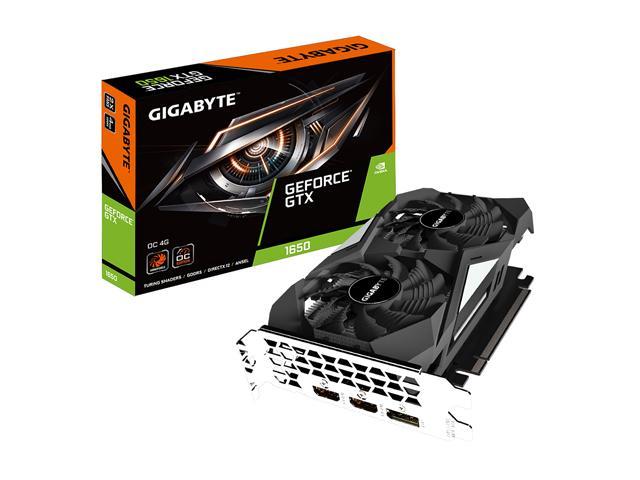 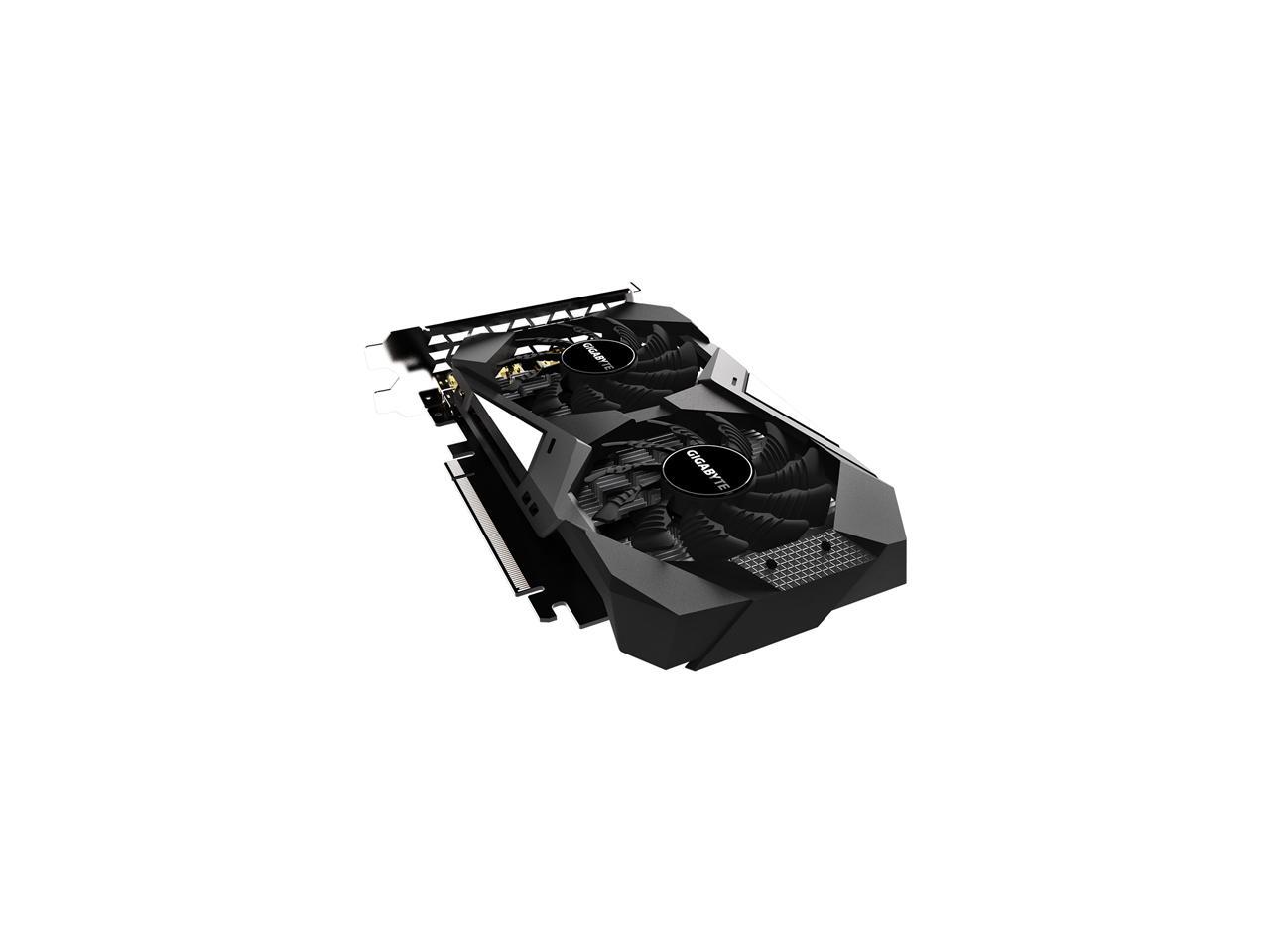 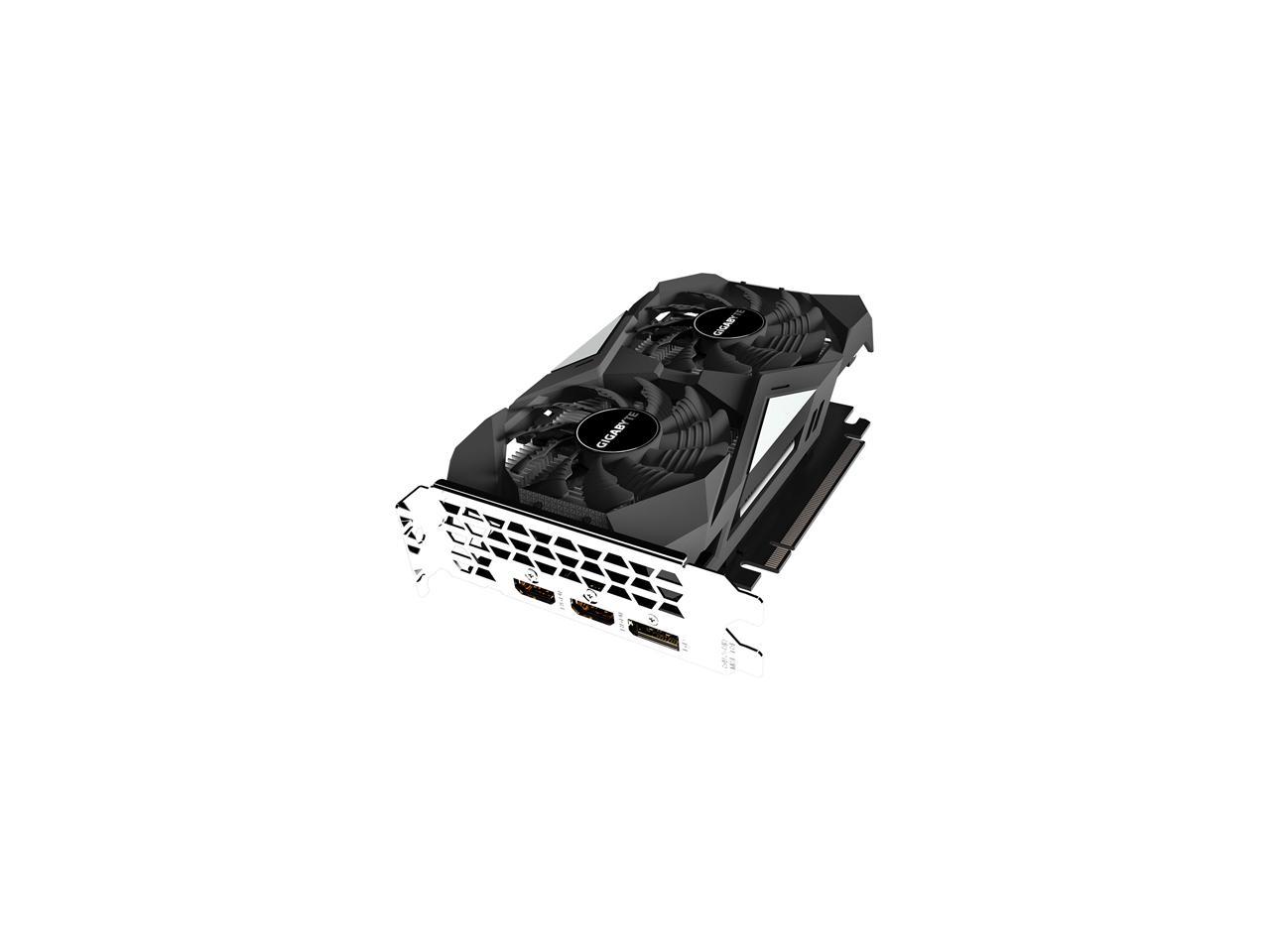 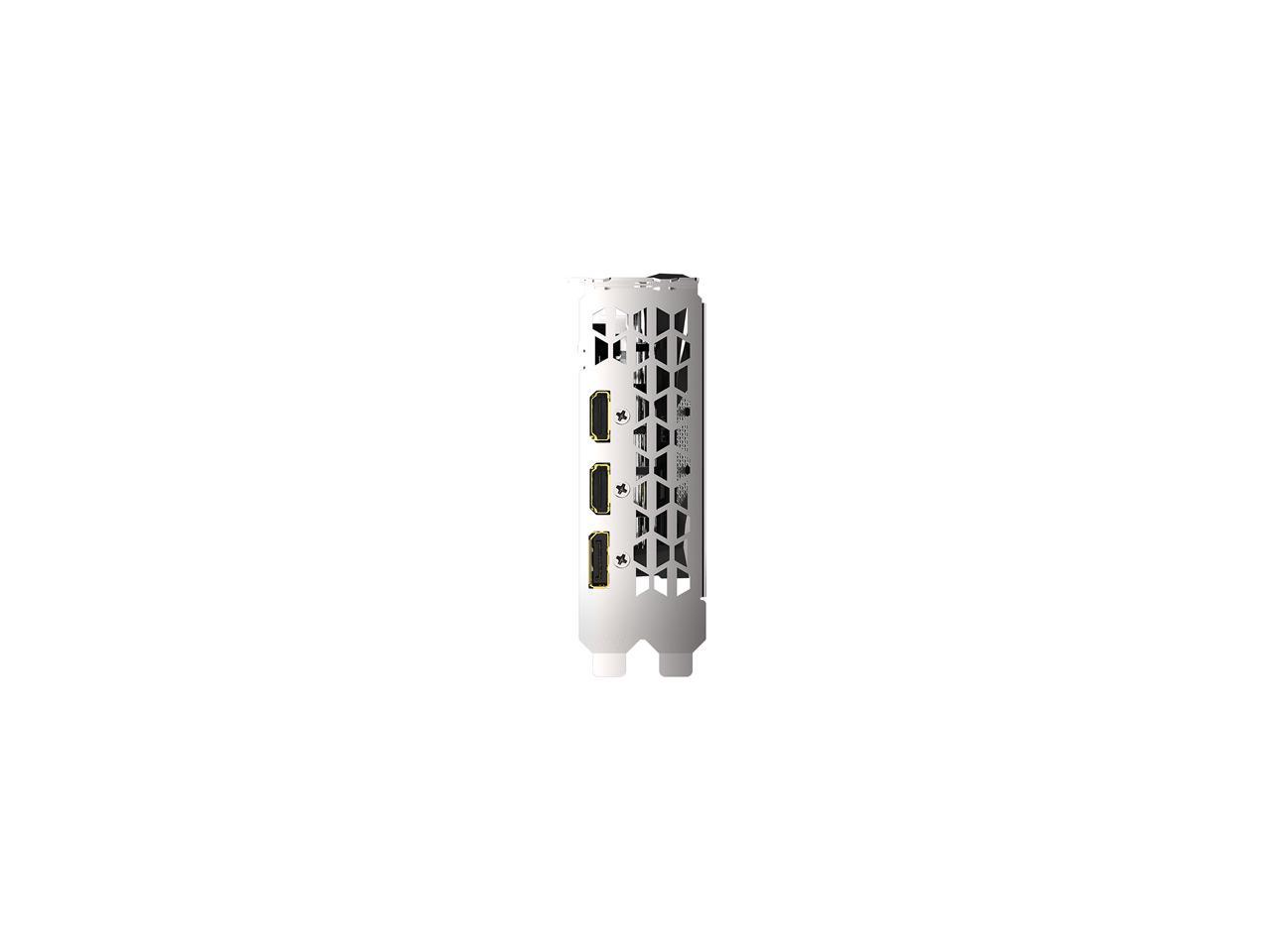 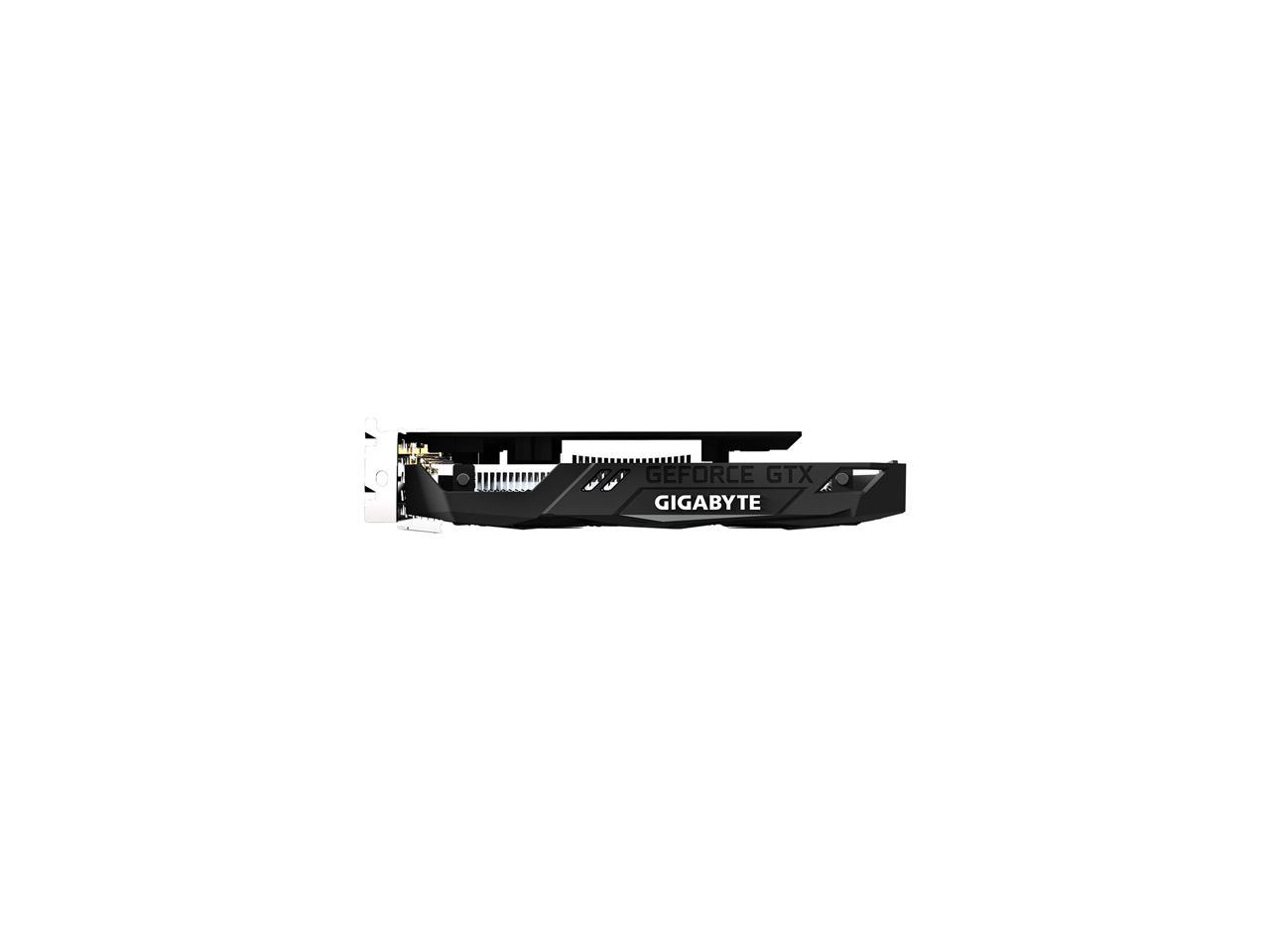 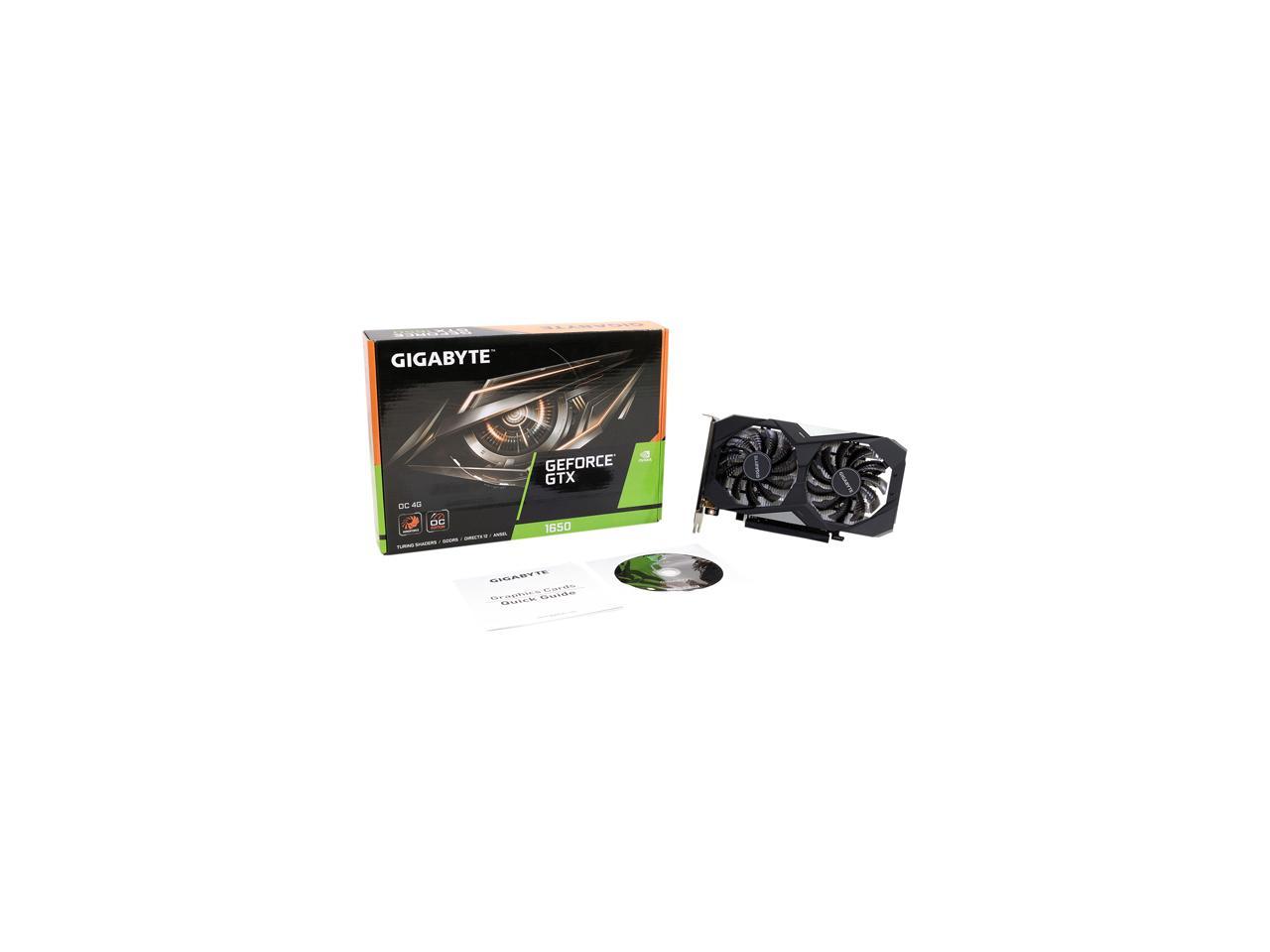 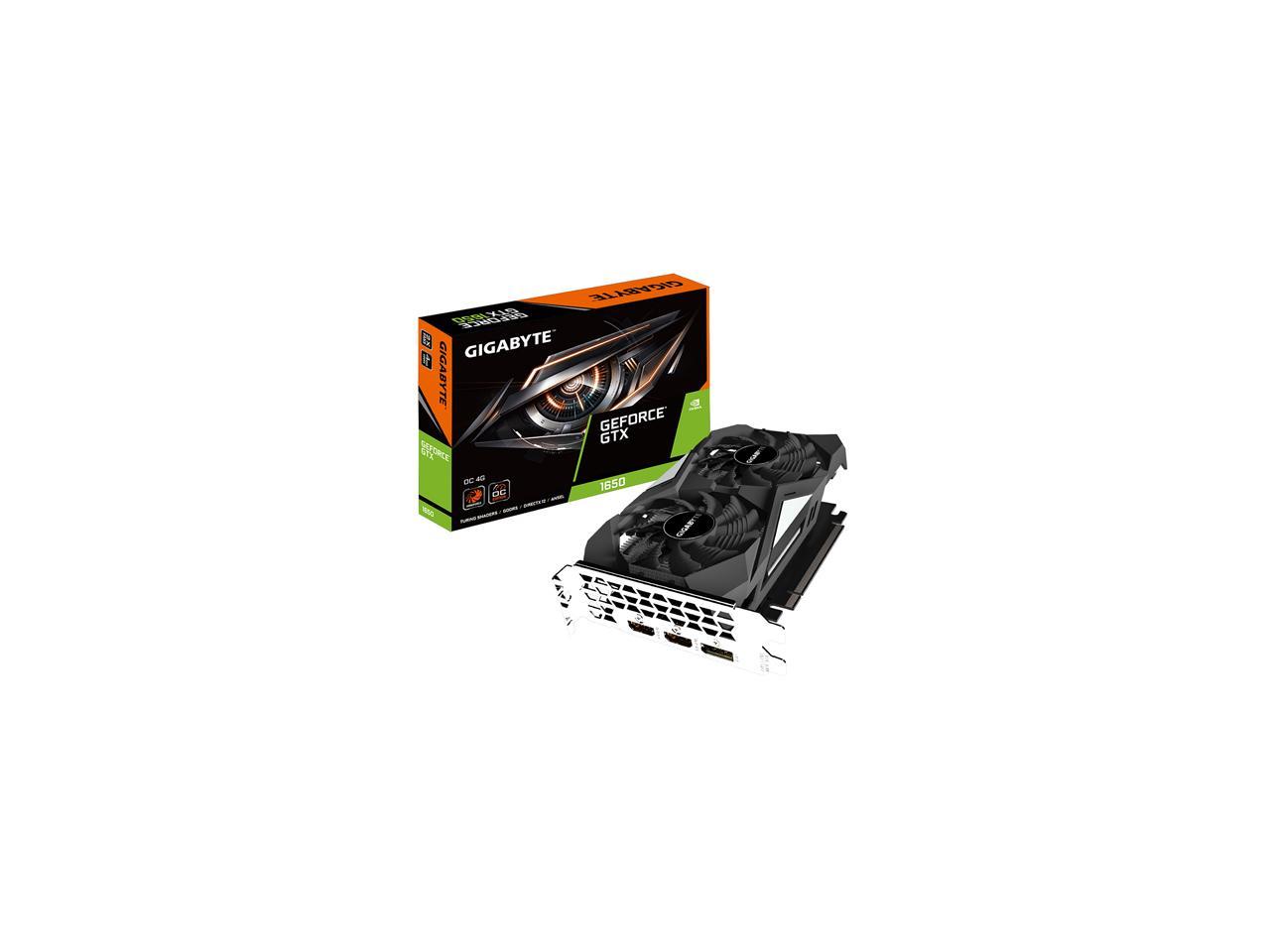 The GeForce GTX 1650 is NVIDIA's new budget-friendly gaming graphics card that turns you PC into a gaming machine. Based on the award-winning Turing architecture, this card packs 896 CUDA Cores and 4GB 128-bit GDDR5 RAM, and has merely 75W TDP for reference model. It delivers smooth performance and brilliant visuals for the most popular games, and is even faster with modern titles.

The Gigabyte GV-N1650OC-4GD card is factory overclocked to 1710 MHz Boost frequency (reference card is 1665 MHz) for more performance out of the box. Its WINDFORCE 2X cooling solution is quiet and efficient, and two 80 mm fans use semi-passive design which stops the fan completely in low load or idle status. And the Ultra Durable components guarantee unbeatable stability, reliability and long lifespan you expect from Gigabyte. The GIGABYTE-patent “Alternate Spinning” is the only solution that can solve the issue of turbulent airflow that comes from having adjacent fans. Since the adjacent fans rotate in the same direction, the airflow direction becomes opposite between the fans, which will cause turbulent airflow and reduce heat dissipation efficiency. GIGABYTE turns the adjacent fans in the opposite direction, so that the airflow direction between the two fans becomes the same, reducing turbulence and enhancing airflow pressure. Airflow is split by the triangular fan edge and guided smoothly through the 3D stripe curve on the fan surface, effectively enhancing overall airflow. The 3D Active Fan provides semi-passive cooling, and the fans will remain off when the GPU is in a low-load or low-power game. It allows gamers to enjoy gameplay in complete silence when the system is running light or idle. Learn more about the GIGABYTE GV-N1650OC-4GD

Pros: It works! It is somewhat close to GTX 1050 Ti in performance, can't reach 1060 though. It is small, does not need a lot of power, runs really cool and quiet with a nice aftermarket cooler. Stays under 70C most of the time. Perfect for most gamers on 1080p monitors who don't want to spend too much money and care about power usage and noise. No issues with driver

Cons: Too much competition from RX 570 (cheaper) and GTX 1060 (faster). Could use an extra port, DVI for example, still popular, plus with 3 ports it is only for 3 monitors, though it can do 4. Backplate? Just for cosmetics, not really needed. Few more points to secure the heatsink, to make card less flexible.

Overall Review: It works and it is good enough with cheap power supplies and for office computers. Perfect for MMORPGS and that kind of stuff.

Cons: It didn’t display at first I had to take it out and put my old card in for display

Pros: I put this card in a build for my niece and it worked out well for her,she plays games in 1080p like mid range games and it looks good for what she likes. Nvidia drivers are always easy to in stall so setup was easy and the card is quiet,so she is happy.

Overall Review: Card does what you would expect for what you pay for.

Pros: My system was 12 years old and I needed something to work in 4k editing for video. This by the specs would work. The install was easy considering I built complete with all new MB/Ryzen etc. it fired right up and works perfect I haven't tested it under full load but not gaming with it so it should be fine. Worth the expense.

Cons: None yet don't expect any.

Overall Review: if your looking for a card that doesn't have to be totally over the top has onboard cooling in a mid range this is it.

Overall Review: Bought this card to upgrade on older work computer so it can use dual monitors. No issues so far.

Overall Review: Would recommend for upgrading a stock OEM machine the pc I installed this into was for a client. He couldn't be any happier

Pros: Has Display ports and HDMI. Card runs quiet and works well with most recent games.

Overall Review: I would recommend this card for a budget build. Great price for the performance it provides. Have not run benchmarks in it but it do a handle Fortnite really good.

Overall Review: The 1650 has gotten poor feedback from many enthusiasts as being a poor choice in 2020 with all the competition cards easily out performing it. If you are a budget minded 1080 gamer, this is your card of choice. For only drawing 75 watts from the PCI slot, this thing performs remarkably well for its power consumption and price point. I upgraded from a 1050 2gb with an i7-7700k cpu and 16 gb 2666 RAM and this thing is pulling 75 frames on CODMW and Warzone max settings, which is perfectly acceptable. If you are like me, a gamer who wants performance and havent jumped to 4k display and/or build yet, this will absolutely extend the life of an older build another year or two, which was my reason for purchase.