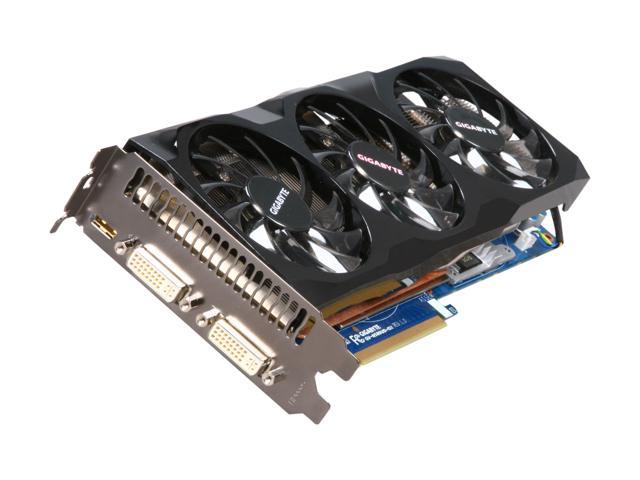 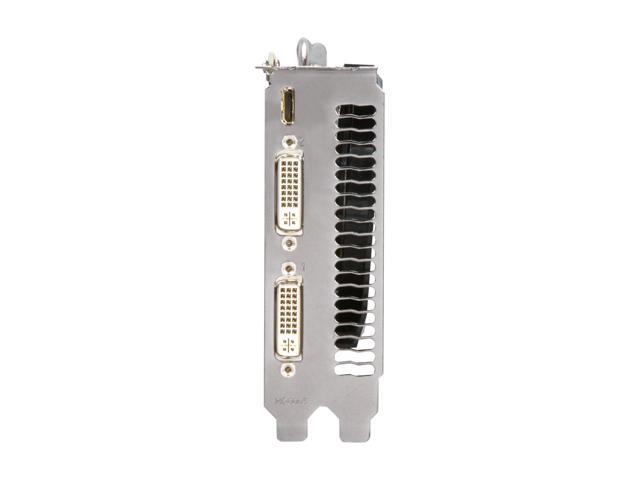 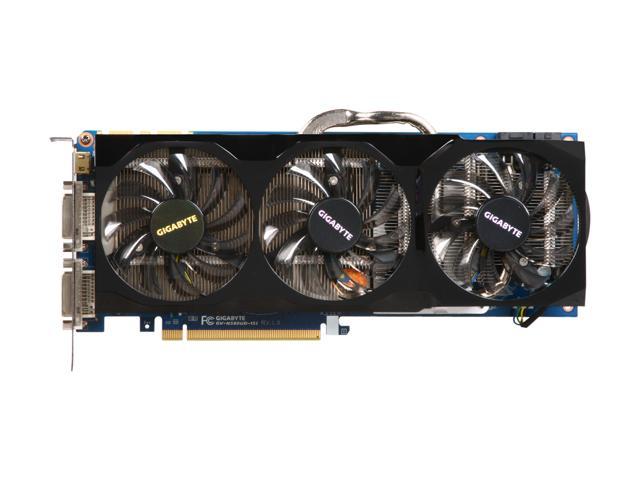 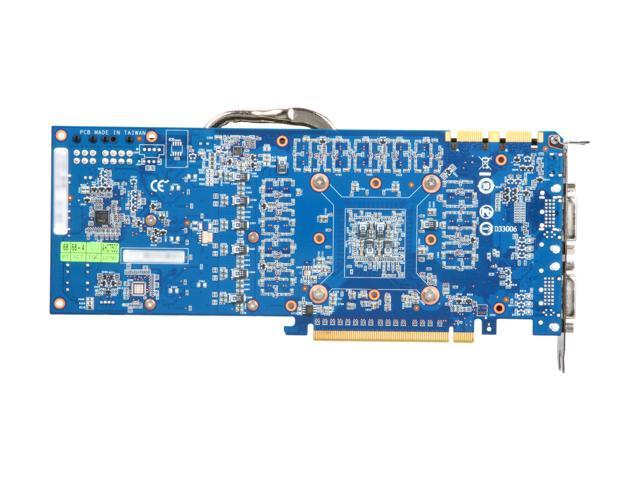 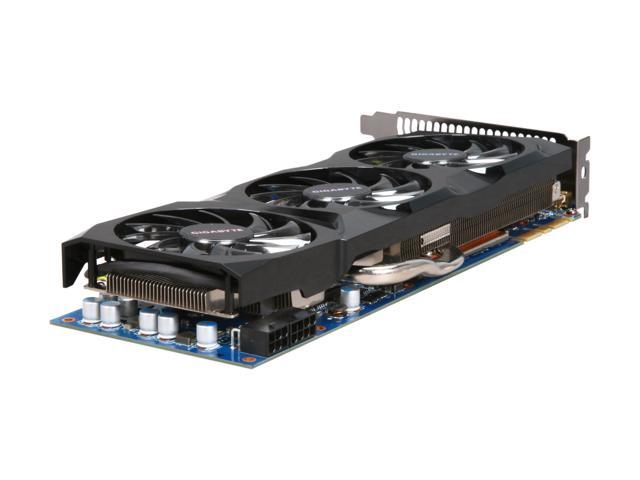 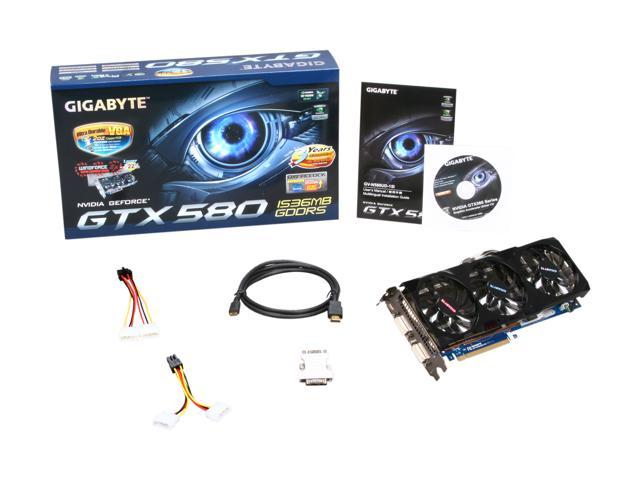 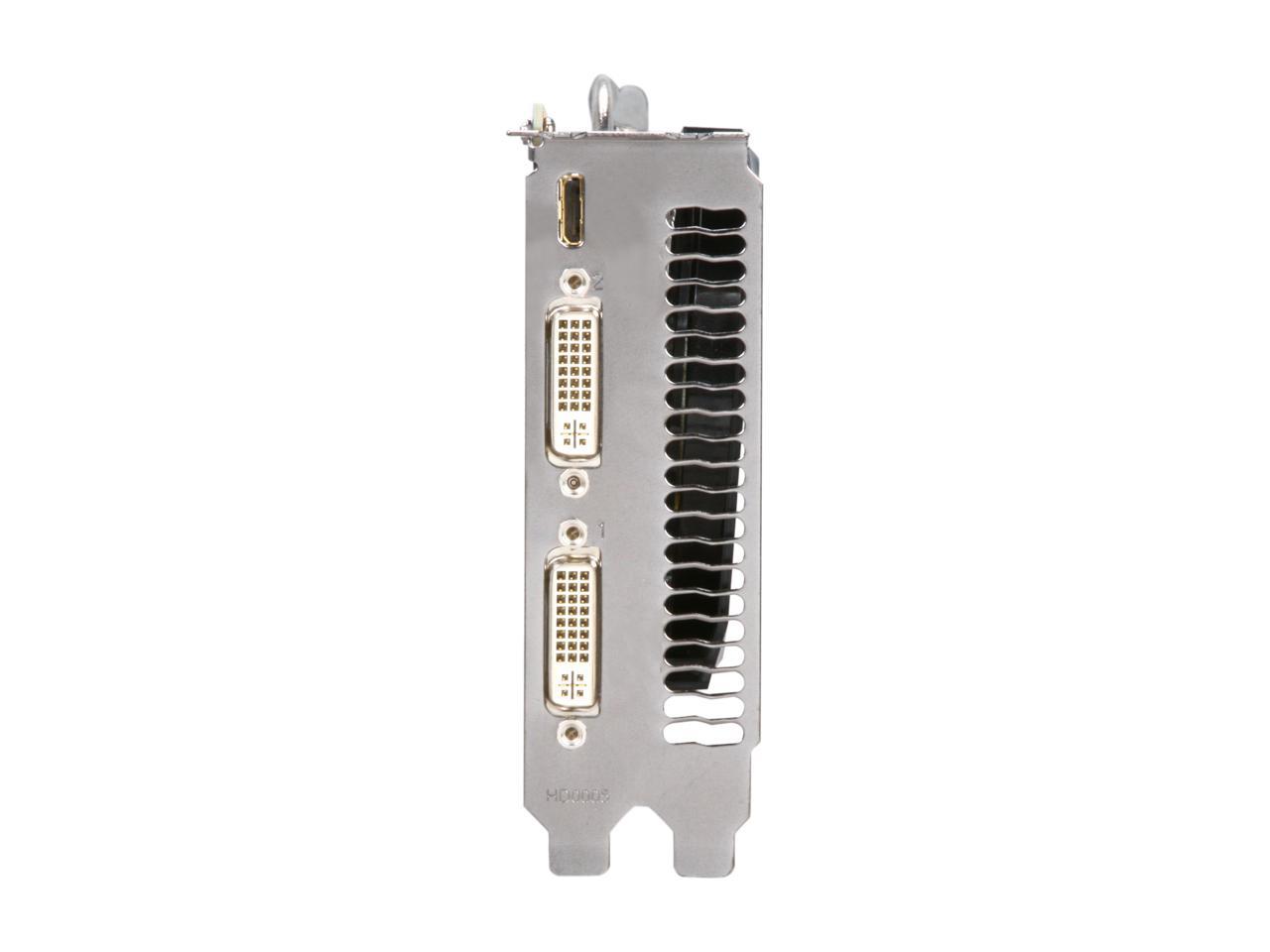 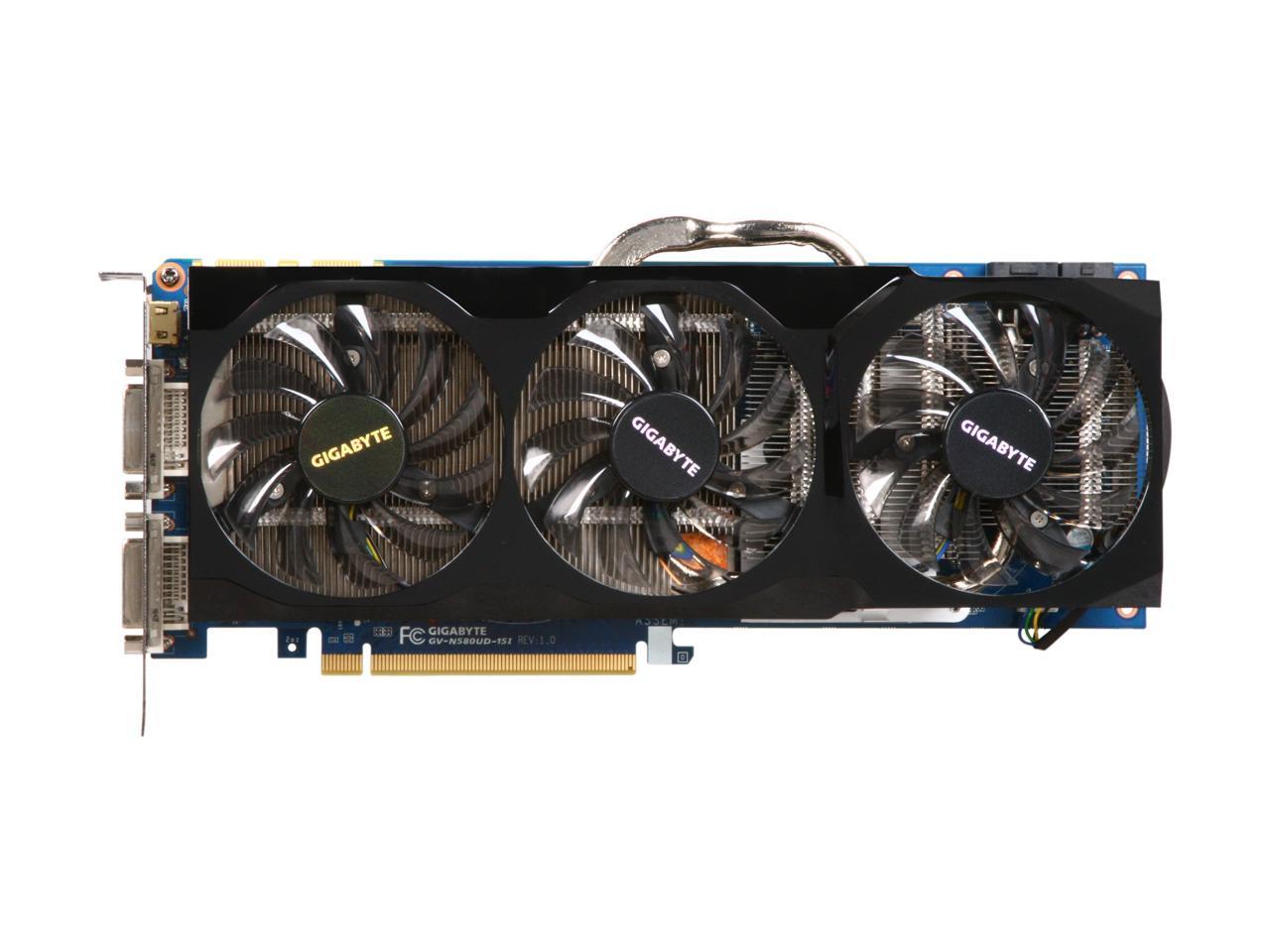 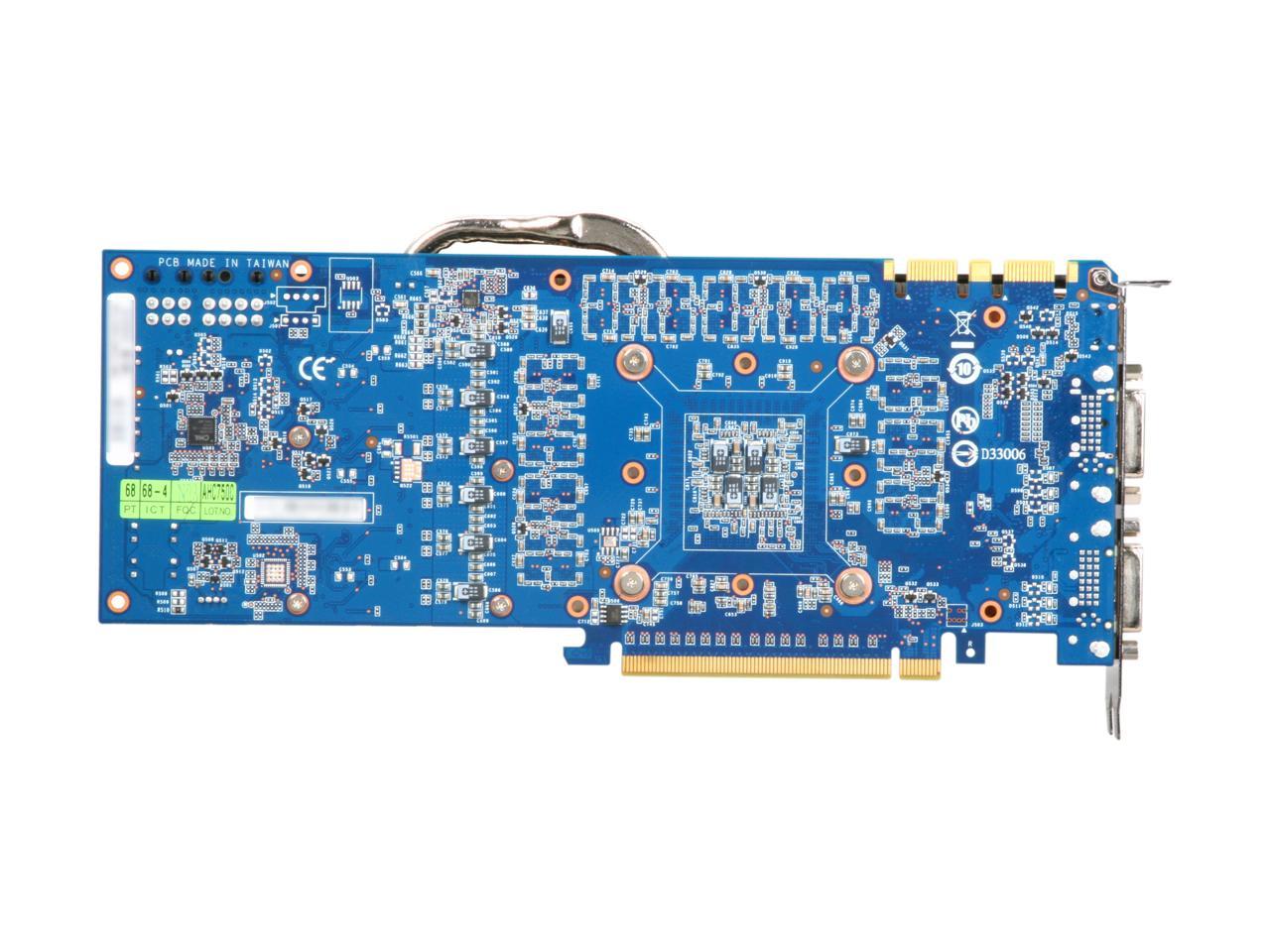 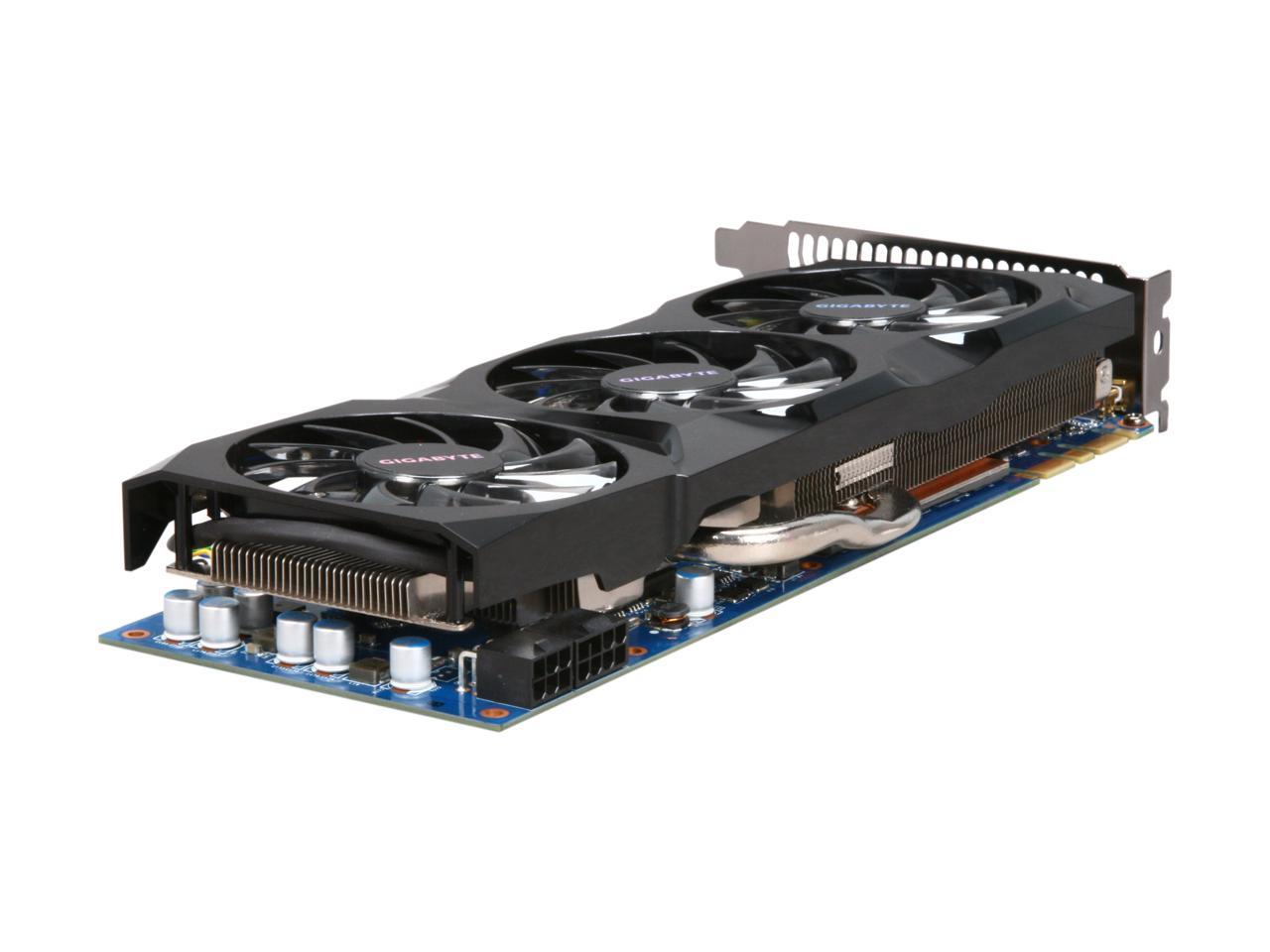 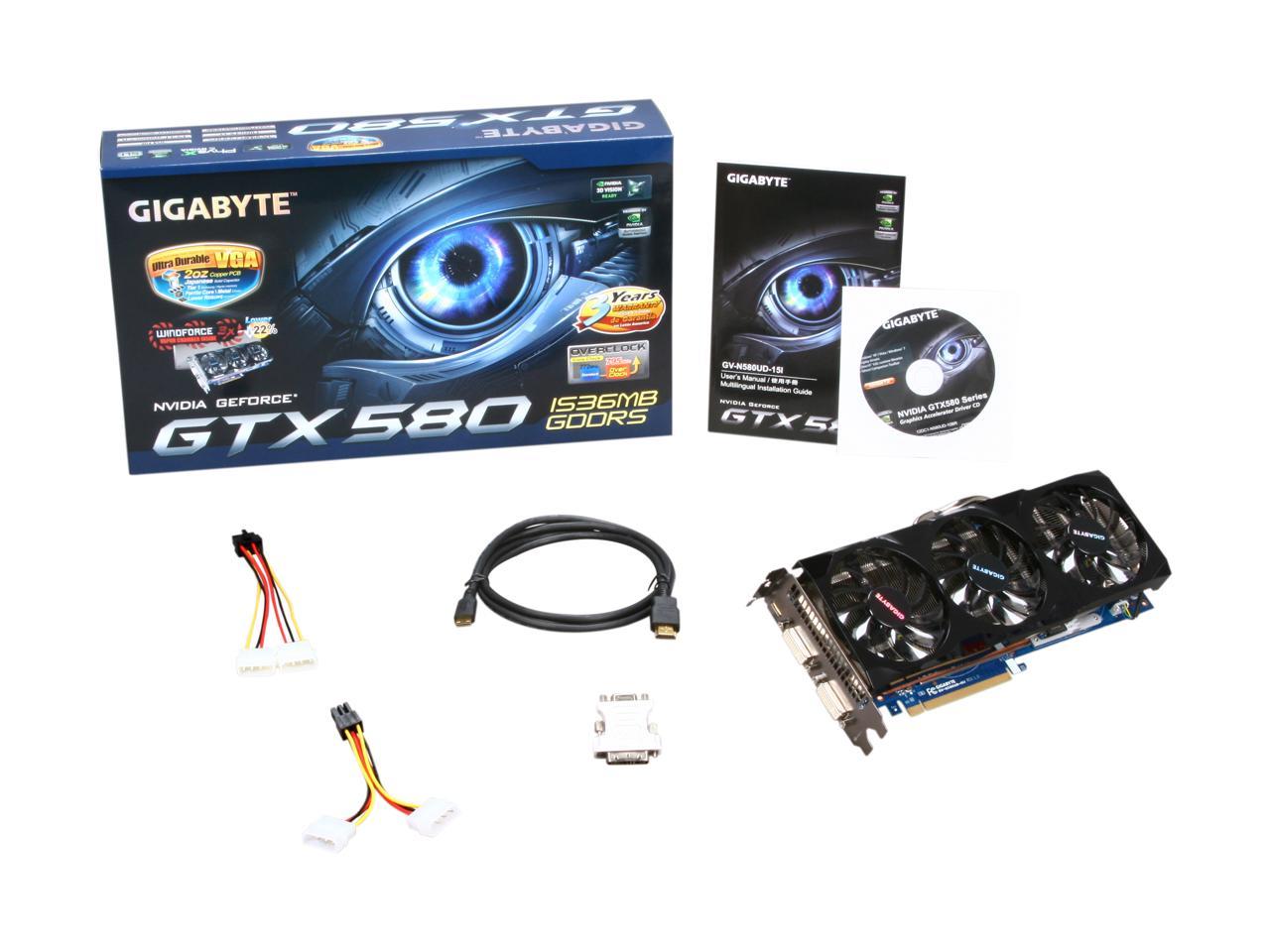 (32) Write a Review
OUT OF STOCK.
Overview
Specs
Reviews
Incorporating 512 CUDA processor cores, a 384-bit memory interface backed by 1536MB GDDR5 memory and the enhanced GF110 architecture, the Gigabyte GV-N580UD-15I delivers outstanding DirectX 11 performance with factory-overclocked 795MHz of core speed. Featuring the WINDFORCE 3X cooling design with vapor chamber inside, the card brings you a much cooler and quieter gaming experience while you rip through the latest titles. As you’ve come to expect from a GeForce GTX GPU, Gigabyte GV-N580UD-15I packs support for all the premium GTX gaming technologies such as NVIDIA Surround, 3D Vision, PhysX, and SLI.

Learn more about the GIGABYTE GV-N580UD-15I

Cons: Didn't work for Long Not a lot of accessories for a card of this price Gigabytes Horrible Customer Service/RMA Process This card worked great for just over a month. Then I started to notice some artifacting, blue spots, tearing and other junk after about 10-15 minutes of heavy 3D use to full load. Mind you, there is no OC, save the factory OC on board. Case is custom Lian-Li with, count-em, 7 120 MM fans and a custom Koolance water loop. NO OC at this time. Put a Radeon 4870x2 in, runs like a dream. no problems, full load for hours, I'm set. Put the Gigabyte 580 in and after about 10 minutes or so, I get artifacting. Tearing. Blue spots and junk. No problems for about a then all this started to occur. Stock everthing.

Overall Review: Gigabytes RMA process is got to be the worst I've ever seen. No option for advanced replacement or anything. 2 business weeks to get my card back??? Since I was over the 30 days, Newegg wouldn't take this thing back. So if and when Gigabyte replaces it, I'm selling it and buying a different card. My first Gigabyte card ever and my last. I've always been an EVGA/Asus/XFX fan. Should've stayed on the reservation. Mind you. If the card worked, it's great. But the rating must take into account the totallity of the circumstances which includes the failure of the card and Gigabytes horrible process for RMA, the worst I've seen which leaves me to conclude; HORRIBLE! Harsh? Yes....but hey....I spent $500 on a video card. that thing better be tip top and so should the service.

Pros: Fantastic cards while they are working correctly.

Cons: I purchased two of these to run in SLI. Everything was great until I started to have lockups and loss of video signal. I narrowed down the problem to one of the two Gigabyte cards. I will refer to the two as card A and card B. With both cards installed, I would lose video signal and the system would lock up and I would have to hard reset to get back up and running. If I removed card B and ran on a single GPU, the system would still lock up. I removed card A and installed B back in. The system would run rock solid. In other words card A was bad. I did several configurations including placing the cards in two other computers. I contacted Gigabyte Tech support. The only way is to fill out the web form and wait for a reply. It took 6 days to get the first reply. After sending messages back and forth, we decided to RMA. I sent the card back to Gigabyte. They received it on a Friday. The following Friday I received an email that they were sending the card back.

Overall Review: That is all that it said. They did not say what they did to it, if they tested it, if it was bad, good, or repaired. I know it is the same card because I marked one of the connectors with a marker. Needless to say the card is not fixed. I am still having the same problem with it. I work in service as well. I understand products can fail. I was not the least bit upset about that. However, I am rather ticked off that my warranty is useless now that I realize that they will not stand behind their products. I will never recommend Gigabyte to any one ever again. It is not because I believe they have inferior products. It is because they will not stand behind their product in the event there is a problem.

7 out of 7 people found this review helpful. Did you?
Manufacturer Response:
Dear Customer, Thank you for your comments. We apologize for your difficulty with your Gigabyte product. Please contact us at newegg-support@gigabyteusa.com with the case number 75912 in the subject line. We will provide personalized service and analysis to help solve your issue ASAP. If the matter is urgent, please send us your contact number, and we will contact you. Gigabyte VIP Support Team
Brett L.
Ownership: 1 month to 1 year
Verified Owner
Updated Review7/18/2011 9:45:54 AM

Cons: - Same issues with before, the two rear fans blow hot air back into the case but it does keep the card rather cool, even during summer (I'm comfortable as long as it keeps under 70C) - Flimsy (need to handle the card by the board, and flimsy once you start handling the cooler) - Voltage Regulators (see below)

Overall Review: my setup - Core i5 760 - DDR3 1600 Vengeance Corsair 12gb (3x4gb) - Gigabyte GA-P55A-UD4P - OCZ Vertex 2 120GB - Dell UltraSharp '08 27" Monitor - Antec Nine Hundred This card is running great. I run my computer every day (had the card since mid-February) and hasn't shown any sign of slowing down (no hardware failures). I don't over clock, however, due to the issue of lousy Voltage Regulators installed onto the board and I don't recommend ever doing so (even with good cooling). The 570s are known for exploding Voltage Regulators when overclocked. Even then, some do explode @ stock speeds. Overall, I recommend this card if your intending to only use a Single Card and not in SLI mode with the fan cooler. The cooler needs room for the air to pass through with the least amount of resistance if possible, otherwise you'll see higher than average temperatures.

Pros: Its not DOA as before. new card came in and its amazing! Idles at 39C Very Quiet Stable so far

Cons: First one came DOA, but the UPS shipping box was nearly destroyed.

Overall Review: The new one came in a completely unmolested box. Advanced RMA took only 3 days and my card that i shipped out still isnt there yet. Thanks Newegg! HIGHLY recommend, Great card

Cons: This fan design is NOT great for tri-sli config. These would work best in a SLI (two card config) if you have at least one open pci- slot between them. The middle card in tri-sli will get starved for intake and temps under load will reach > 94C. This is only a con if you run more then 2 of these cards. For single card or dual cards in sli with an empty slot between them its an AMAZING card(s)

Pros: Read my other thoughts: This card burns through BF3, Metro 2033, Crysis, etc. Quiet, stable, and fast. Got this on a weekend deal for $329.99AR, I have never been burned by Gigabyte on a rebate.

Cons: Read my other thoughts: Two Gigabyte Wingforce GTX 560 in SLI beat this card but run in the 70C to do it.

Overall Review: When I first booted to this card it would not run stable at it's rated clock, I UNDER clocked it to 750MHz and it ran well. It was not getting enough voltage for 795MHz., I'm not talking about PSU voltage, but what the card's voltage regulators were providing. I have ALWAYS had good results with Gigabyte's tech support, so I thought I would try them before an RMA back to the EGG. Flashed the card's BIOS to F33 and this thing has a whole lot of head room. Rock solid stable at 875MHz and only 1.063mv, temps have not exceeded 56C. Google the review on this card to see what it can OC to, 1005MHz on air!

Cons: Like any other high power GPU, it takes a bit to power. Make sure you have a good enough powersupply to keep this monster going, plus a bit of breathing room if you plan to overclock / expand.

Pros: They run very quiet. I barely hear them in my Silverstone Fortress case. These cards are very fast. I have had great results with all the games that I have run in surround mode.

Cons: These cards vent heat into the case. It would be wise to have an efficiently cooled case for these. Nvidia control panel will not remember monitor locations. In other words there are no profiles to set up so that when you change from "Surround Gaming" back to "Use all Displays". Since it does not remember your settings, you have to fiddle with monitor location each time you change.

Overall Review: I purchased two of these cards for SLI. So far I am very happy. They run fast, cool, and quiet. The fans do ramp up when needed, and then I can hear them but they are still quieter than my single GTX 285 was.