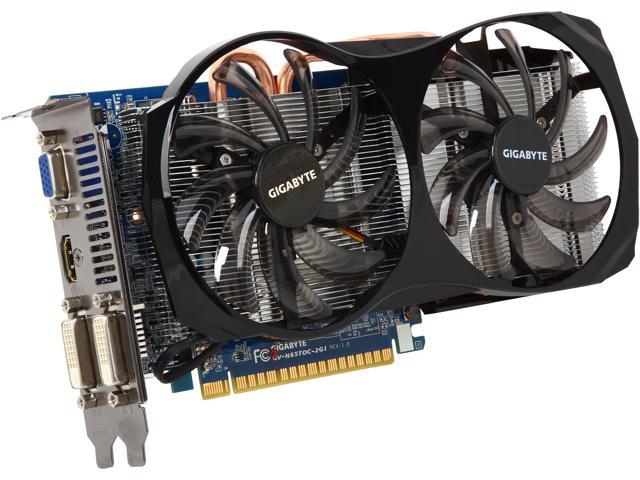 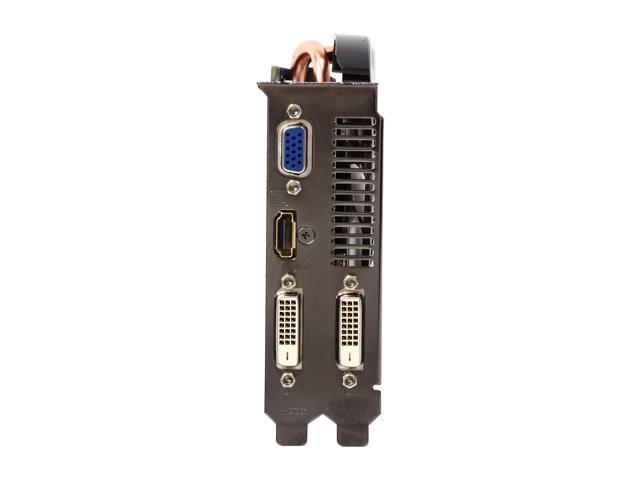 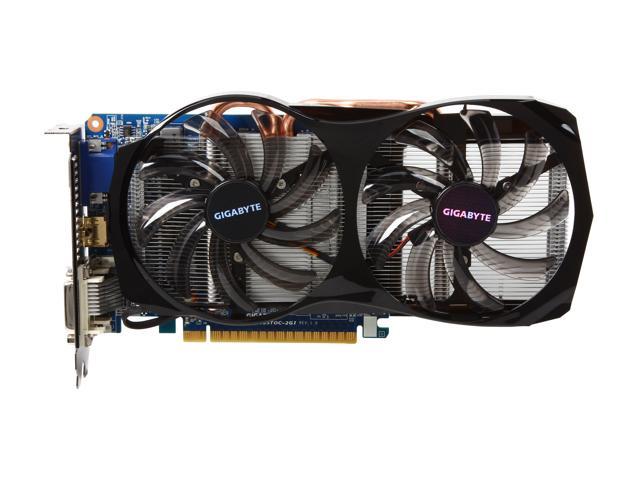 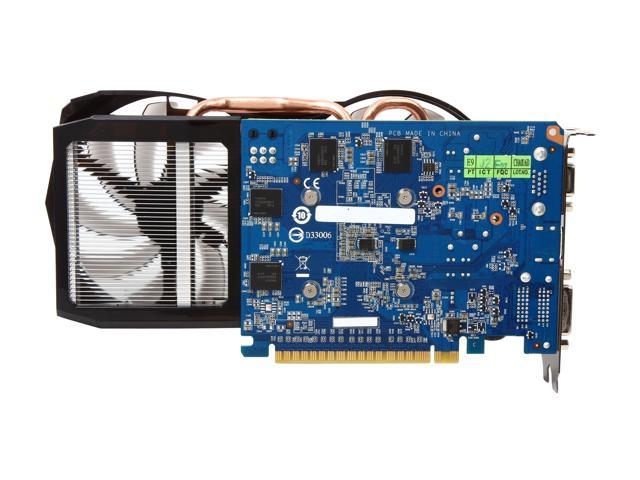 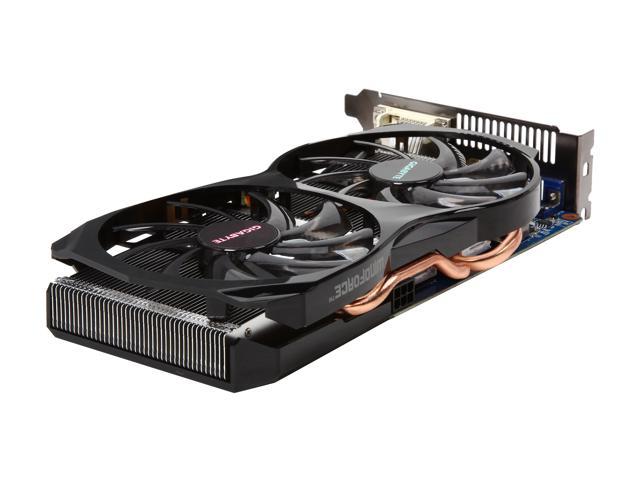 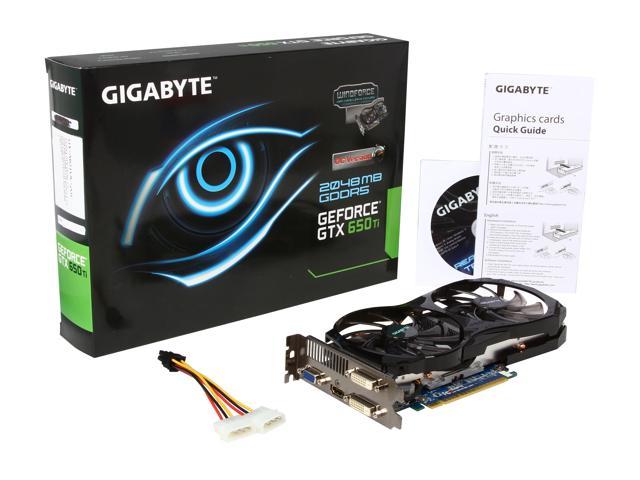 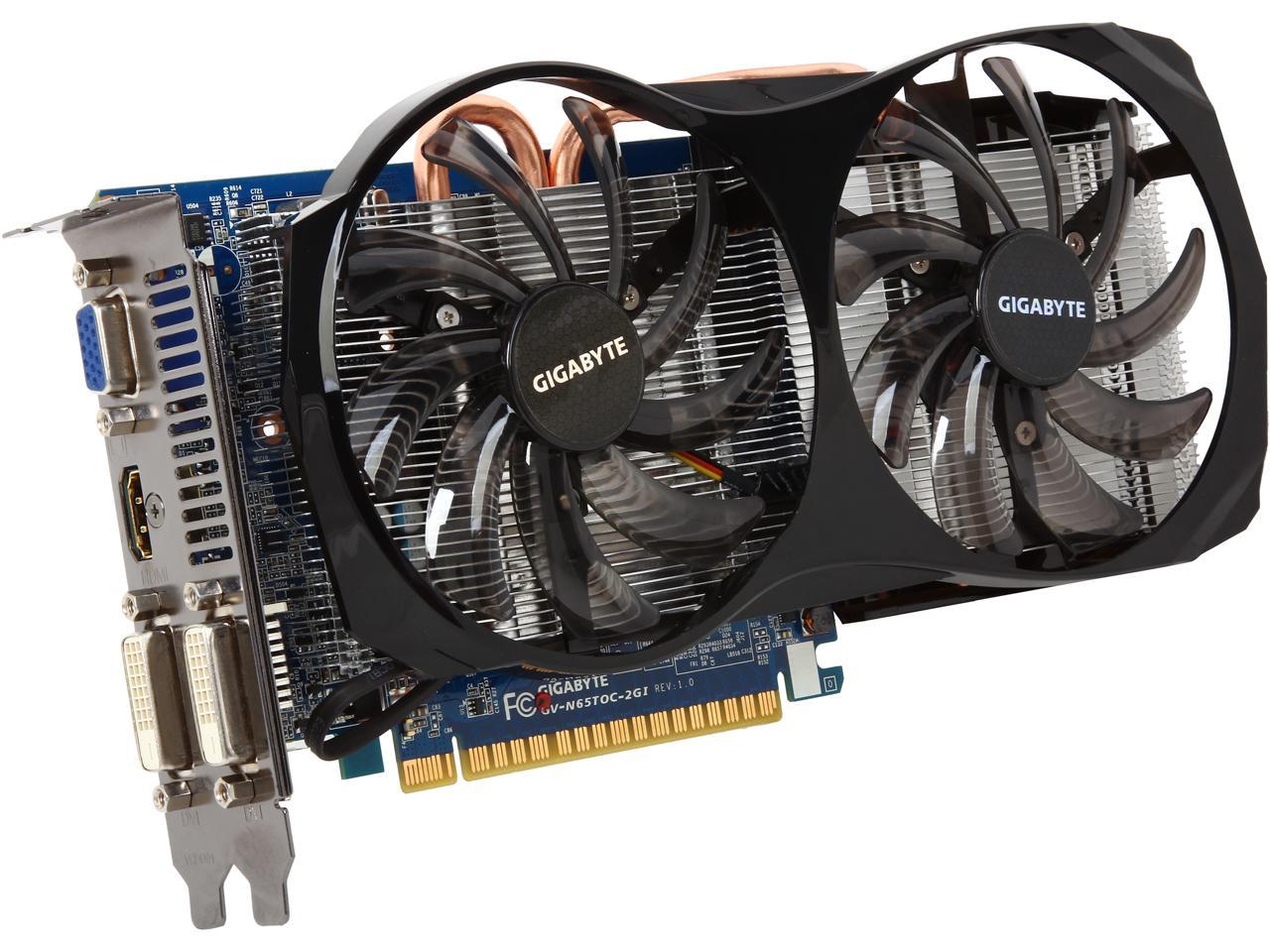 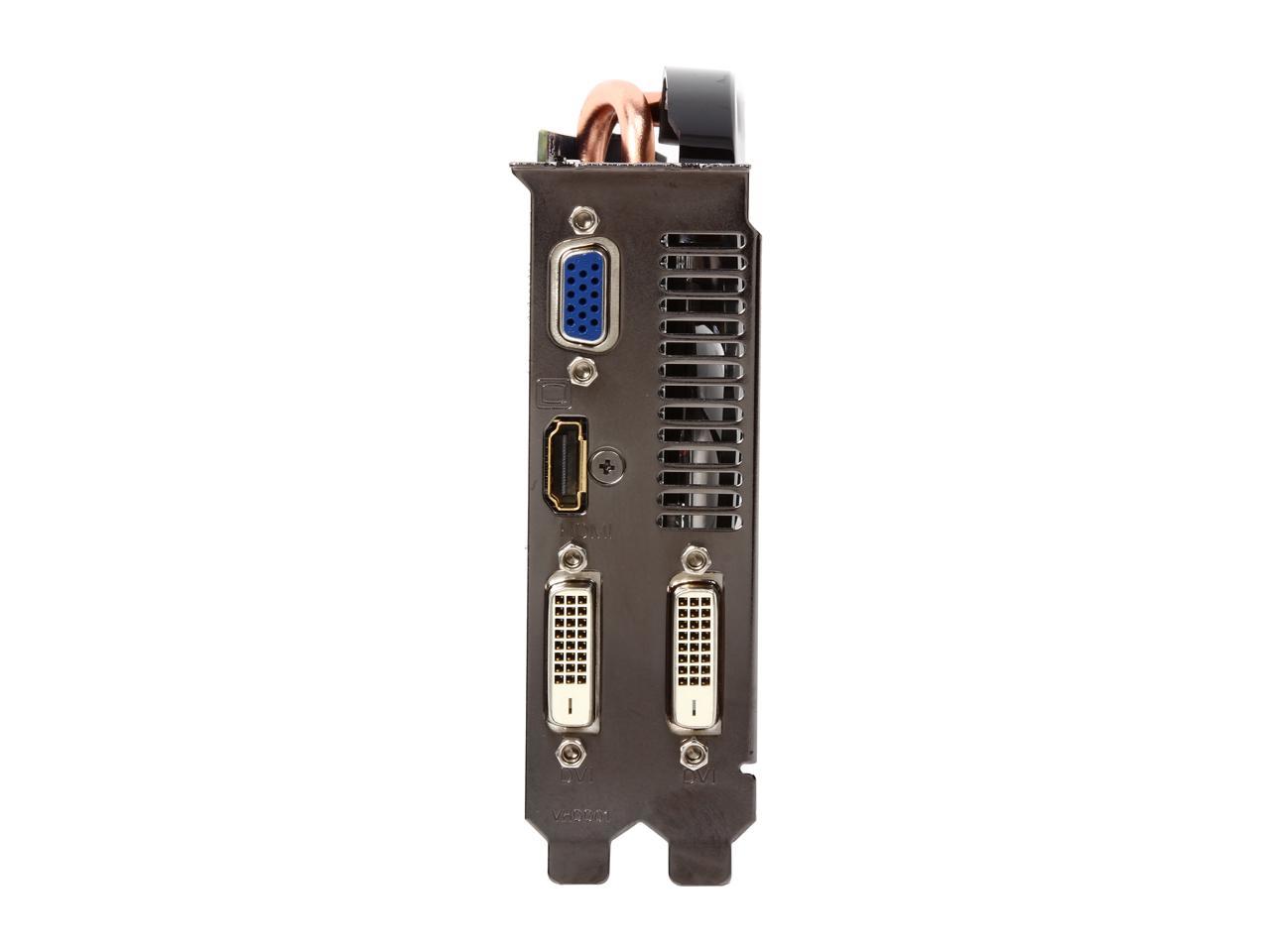 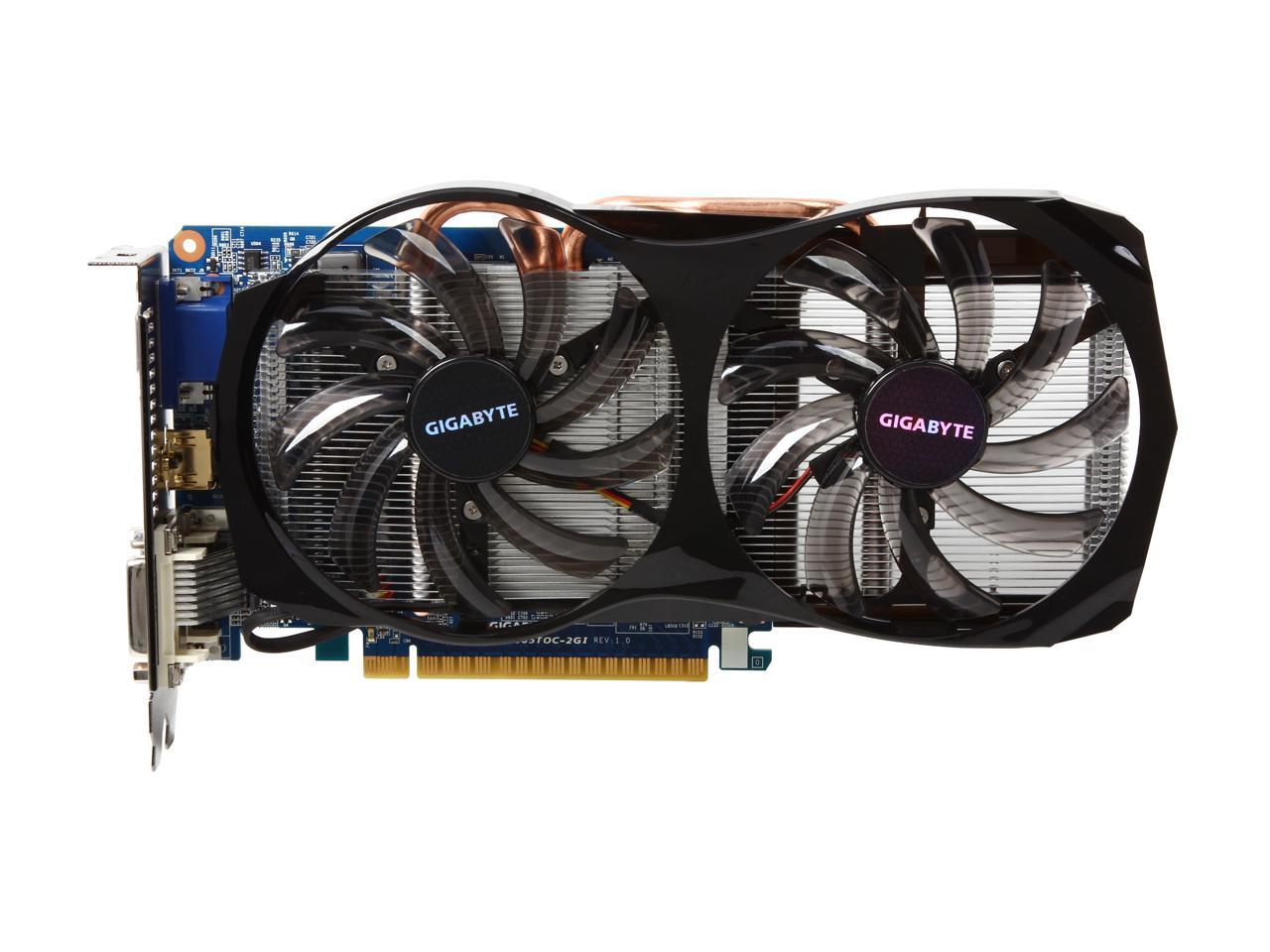 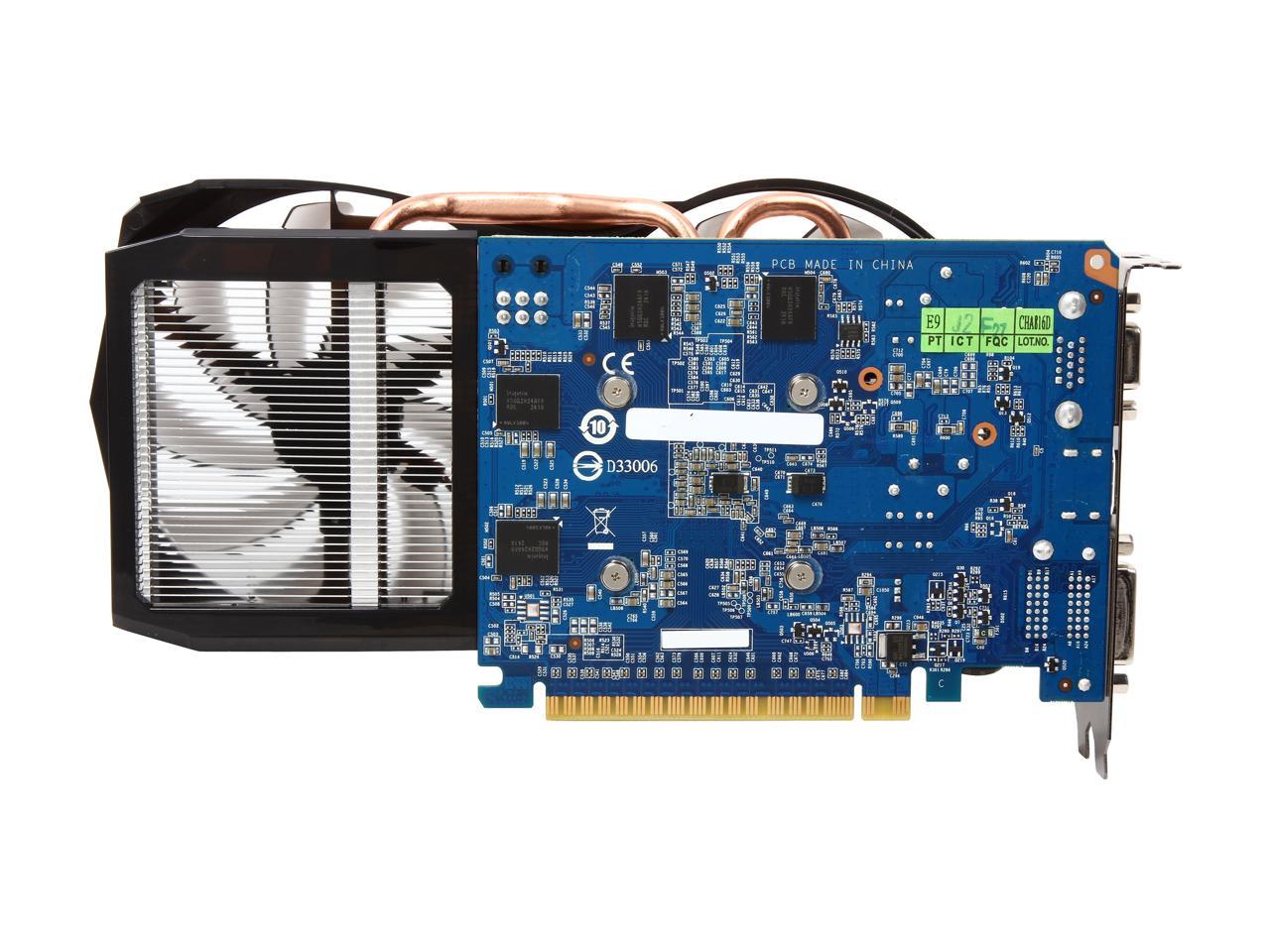 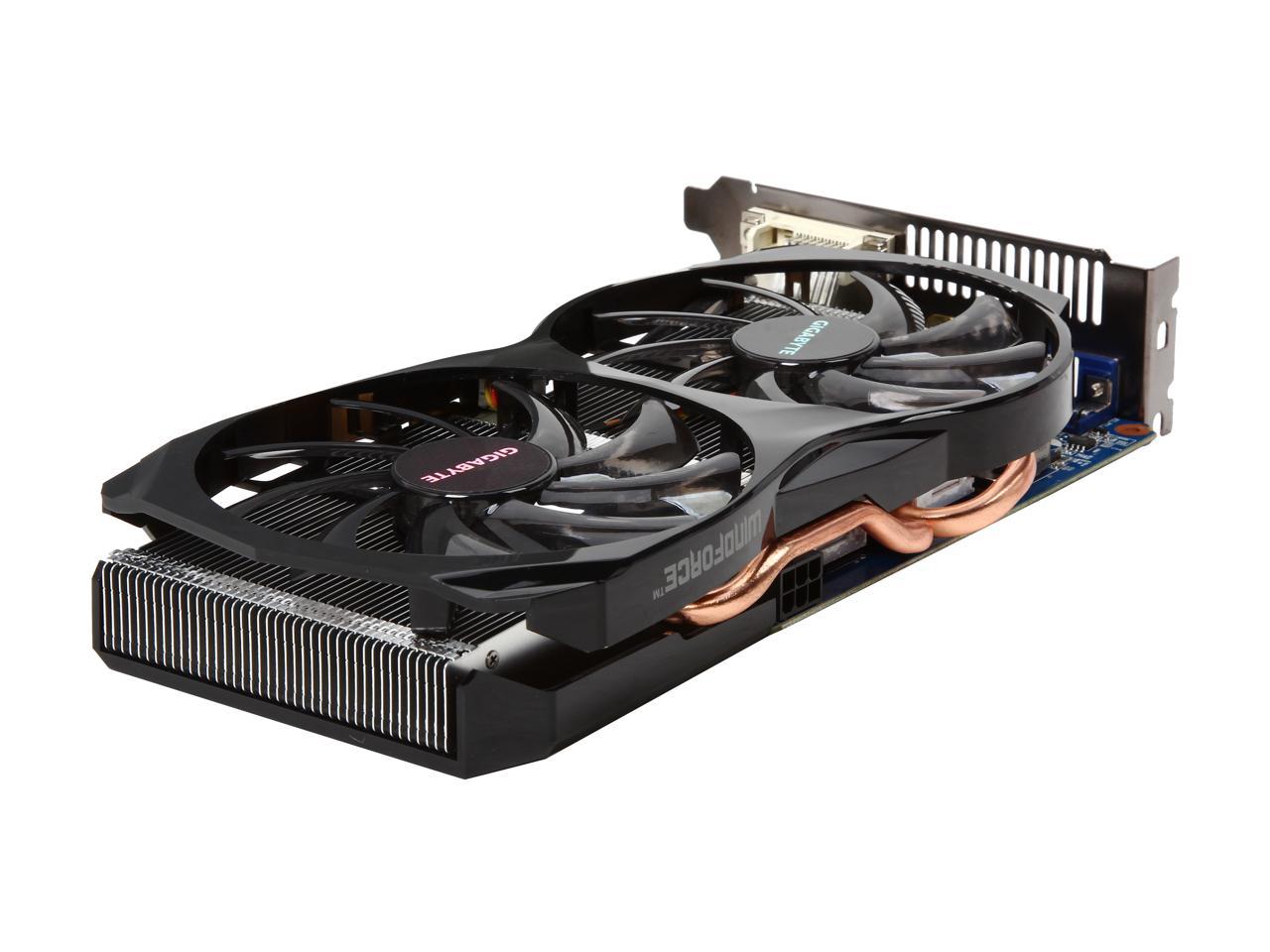 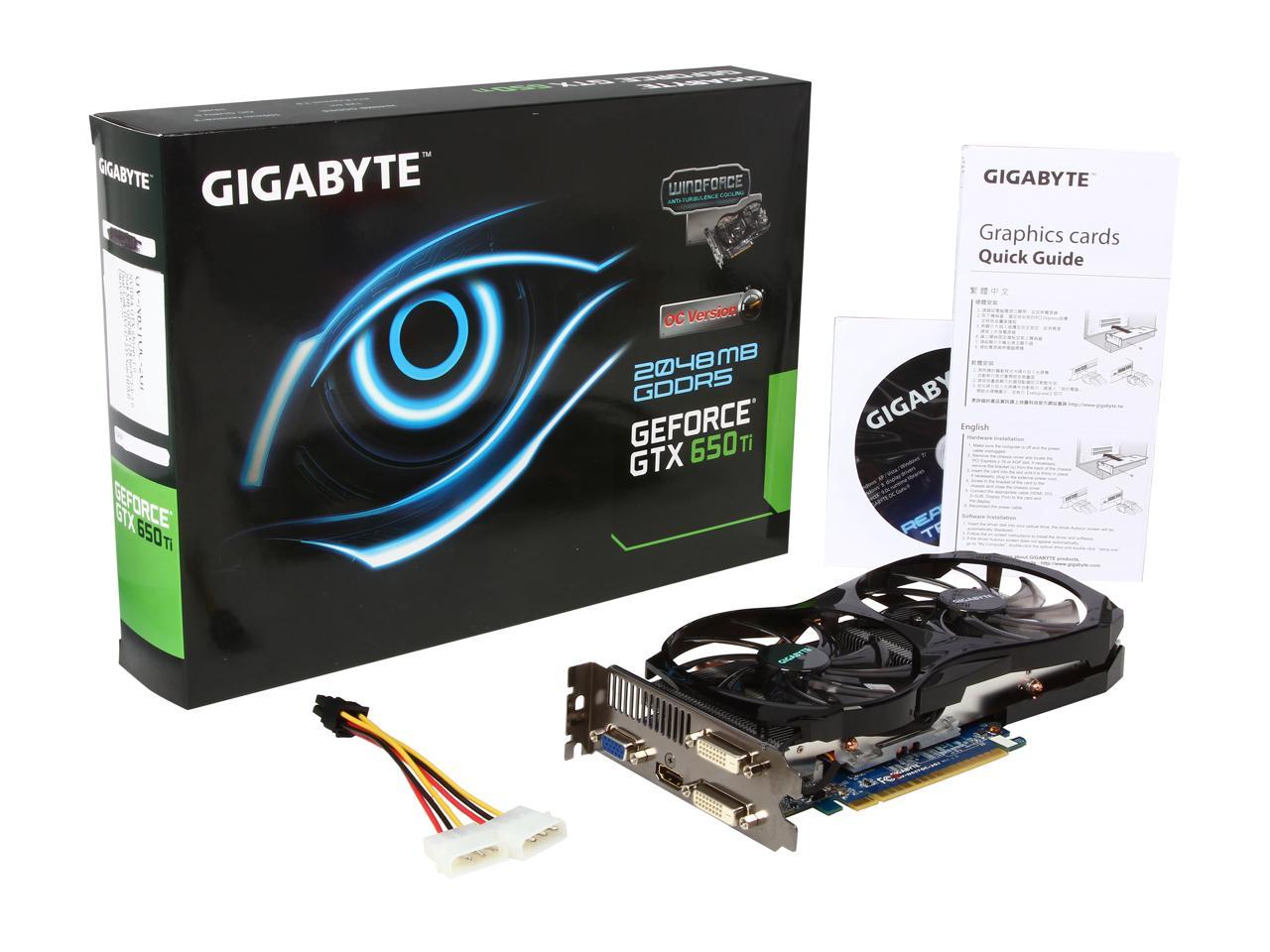 This means the product was tested and repaired as required to meet the standards of the refurbisher, which may or may not be the original manufacturer. Any exceptions to the condition of the item outside the manufacturer’s information should be provided in the listing, up to and including warranty details.
(7) Write a Review
See more "nvidia gtx 650"
In stock.
Ships from China.
Most customers receive within 4-31 days.
Overview
Specs
Reviews

The GIGABYTE GV-N65TOC-2GI is based on the new GeForce GTX 650 Ti GPU. The GeForce GTX 650 Ti GPU utilizes the latest 28nm fabrication process and extends the NVIDIA Kepler-powered family of graphics cards to new levels of affordability while retaining class-leading performance and power efficiency. This graphics card is equipped with the GIGABYTE WINDFORCE 2X parallel-inclined 100 mm dual-fan cooling system. With a special thermal design, GIGABYTE makes sure that this new gaming gear features the best speed of heat dissipation and performance. The GIGABYTE GV-N65TOC-2GI represents the ultimate combination of performance, power efficiency, and affordability in the GeForce GTX 650 Ti series.

Learn more about the GIGABYTE GV-N65TOC-2GI

Pros: good video card for price works great have had for about 6 months no problems runs crysis 2 very well.quite and install with ease.

Overall Review: I've had the last revision of this card and it worked great! I gave the computer with it to my son and decided to build a new computer for my office. I waited a few months before buying a graphics card, and I once again wanted a gigabyte card. Seeing that the GTX 650TI OC was at a bargain price refurbished, I thought I was getting a great deal. WRONG. After a month and a half, it has given me nothing but random blue screens. Stay away from this card.

Manufacturer Response:
Dear Customer, Thank you for your comments. We apologize for your difficulty with your GIGABYTE product. Please contact us at newegg-support@gigabyteusa.com with the case number 115374 in the e-mail subject line. We will provide personalized service and analysis to help solve your issue ASAP. If the matter is urgent, please send us your contact number, and we will contact you. GIGABYTE VIP Support Team
Anonymous
Ownership: 1 month to 1 year
Verified Owner
good value8/5/2014 1:03:09 PM

Pros: This card is great for the price, costs less than a 750ti but still better performance. The only game I have problems running is arma 3 it runs high settings at 20-30 fps.

Pros: Runs just about every game over 50 fps on high settings. Only time I've gotten issue was with Watchdogs but that game wasn't optimized properly. Jives really well Nvidia GeForce experience to optimize game settings for the best look. I have over 50 games installed and most of them are on the highest settings! This is a fantastic card for the price, it has never overheated on me even after hours of gaming in a non air conditioned house in the middle of summer.

Cons: She's a little bulky. I had to wiggle the mobo around in order to get her to fit in the pci slot, otherwise she wasn't going to make it. After a bit of cursing I managed to pull it off. After sealing up the box and booting I've had no issues.

Pros: It's done every thing I've thrown at it correctly and efficiently that it says it could do! It stays super cool, has never overheated even on high demand. I am currently using a 21.5in monitor with a 15in. as well. It can play most games on high. But don't expect to play newer games or next gen games on ultra high because this is only a $150 card. It's a decent card for its price

Overall Review: If you want to play games on ultra and even eyefinity later on in the future, wait and save up for a better card

Cons: Strongly recommend you don't buy this graphic card crashed a lot and i mean A LOT not worth purchasing

Manufacturer Response:
Dear Customer, Thank you for your comments. We apologize for your difficulty with your GIGABYTE product. Please contact us at newegg-support@gigabyteusa.com with the case number 111639 in the e-mail subject line. We will provide personalized service and analysis to help solve your issue ASAP. If the matter is urgent, please send us your contact number, and we will contact you. GIGABYTE VIP Support Team
Daniel M.
Ownership: 1 month to 1 year
Verified Owner
Bang for your buck6/18/2014 3:43:44 PM

Pros: An excellent card for the price. I use it for lightroom to edit photos and general gaming. On BF4 I run it on ultra and average 50-70 FPS.

Cons: The driver crashes from time to time while playing BF4. It only happens when playing BF4 though, so it may be related to the game.