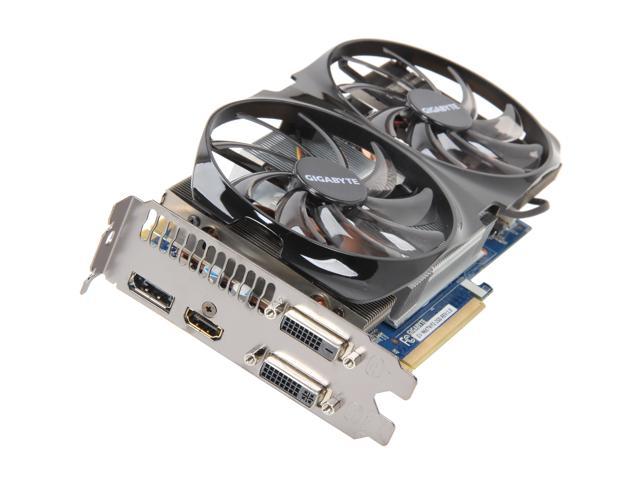 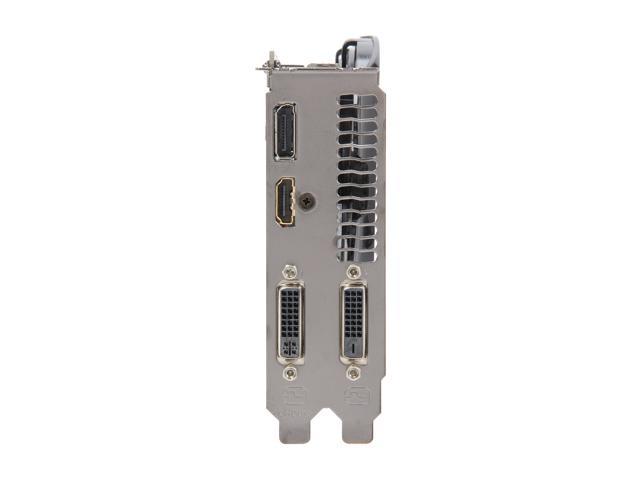 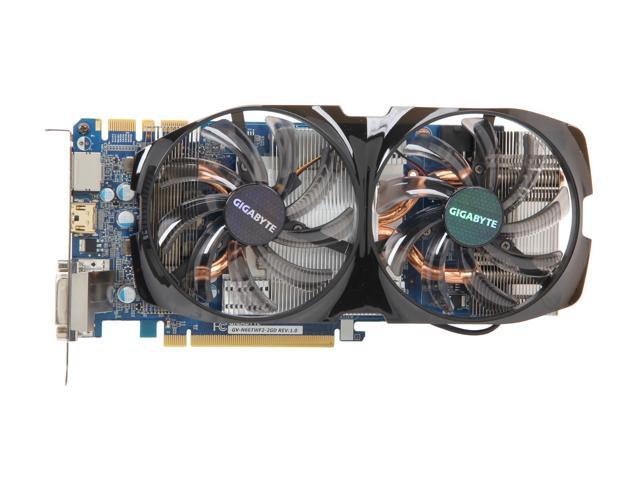 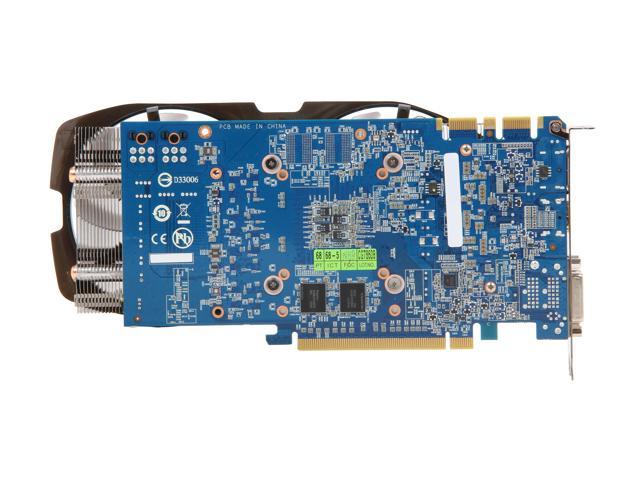 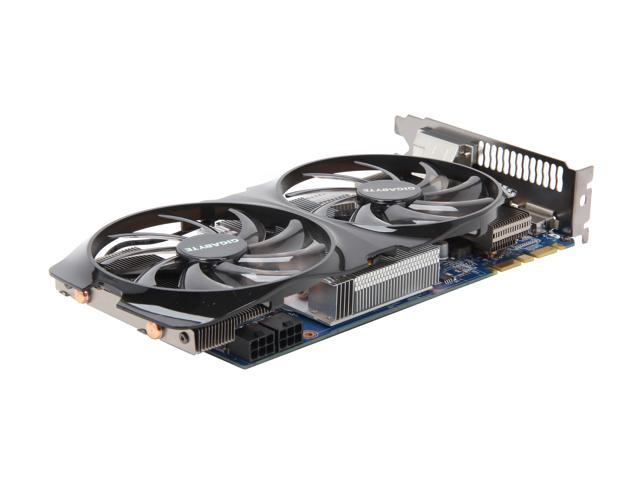 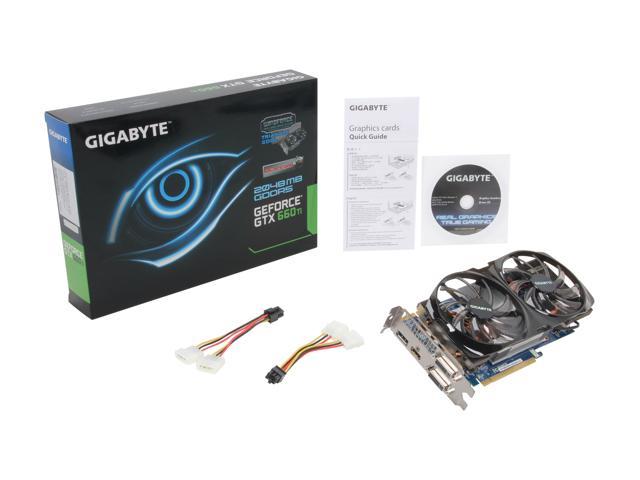 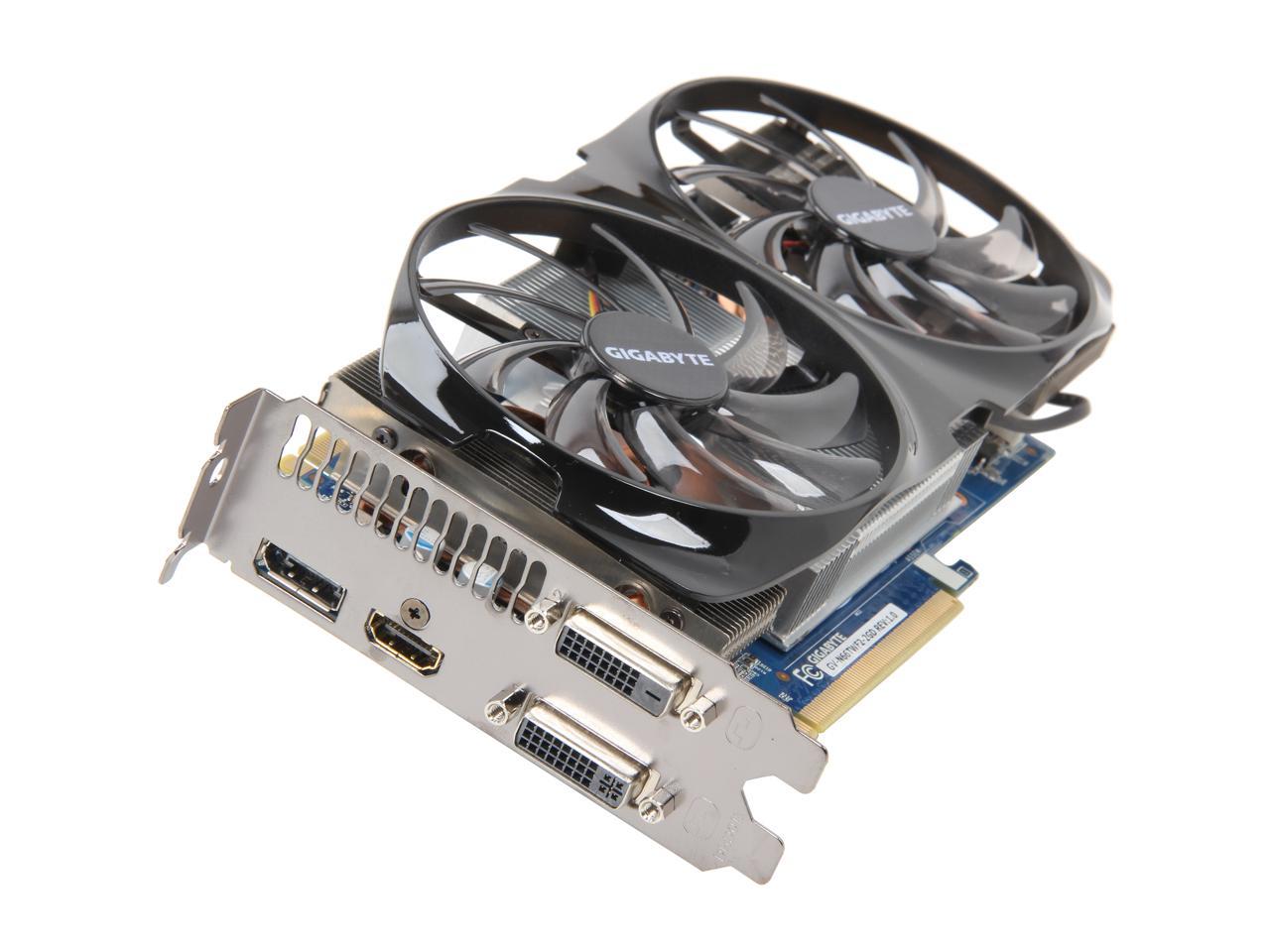 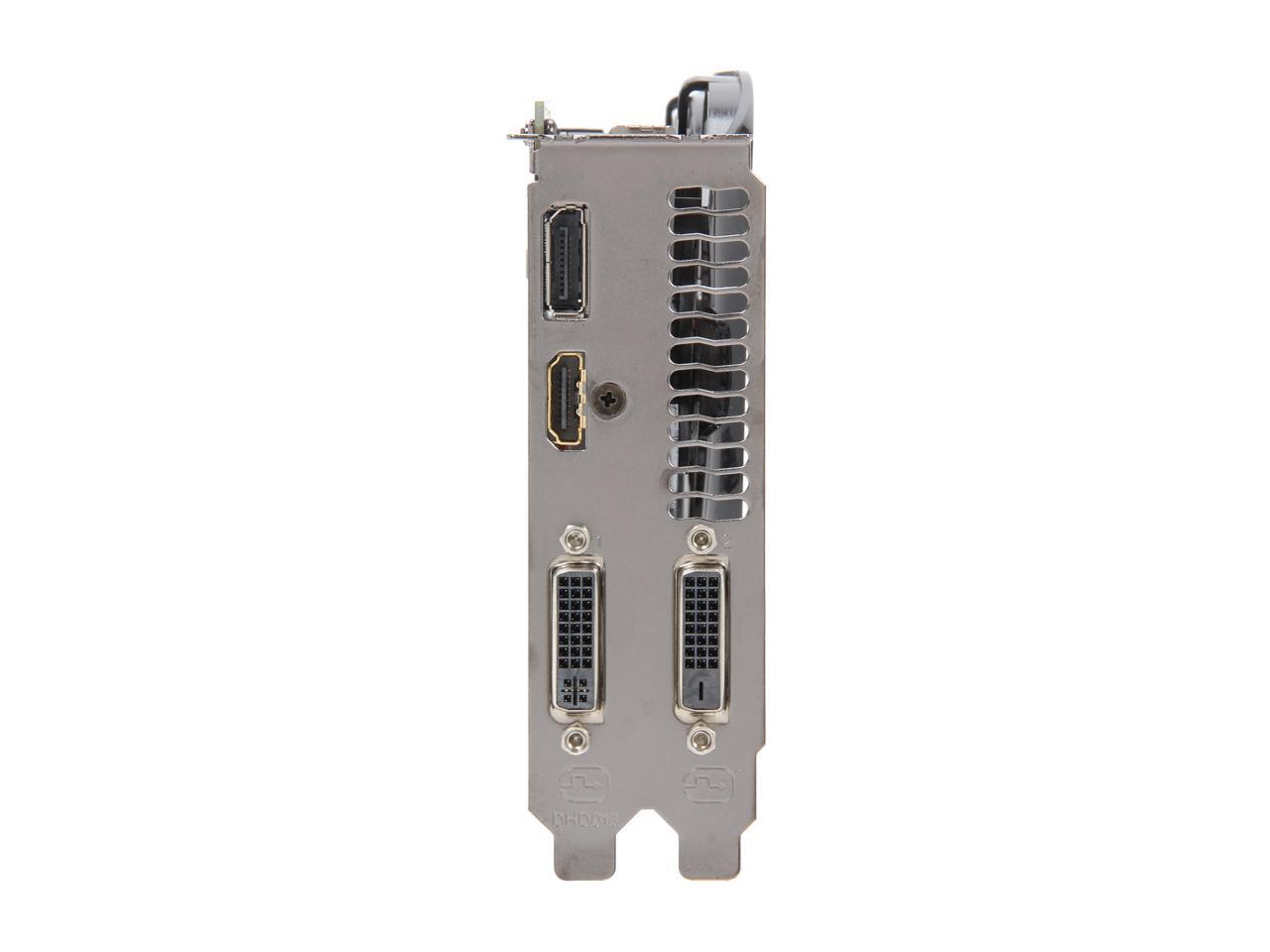 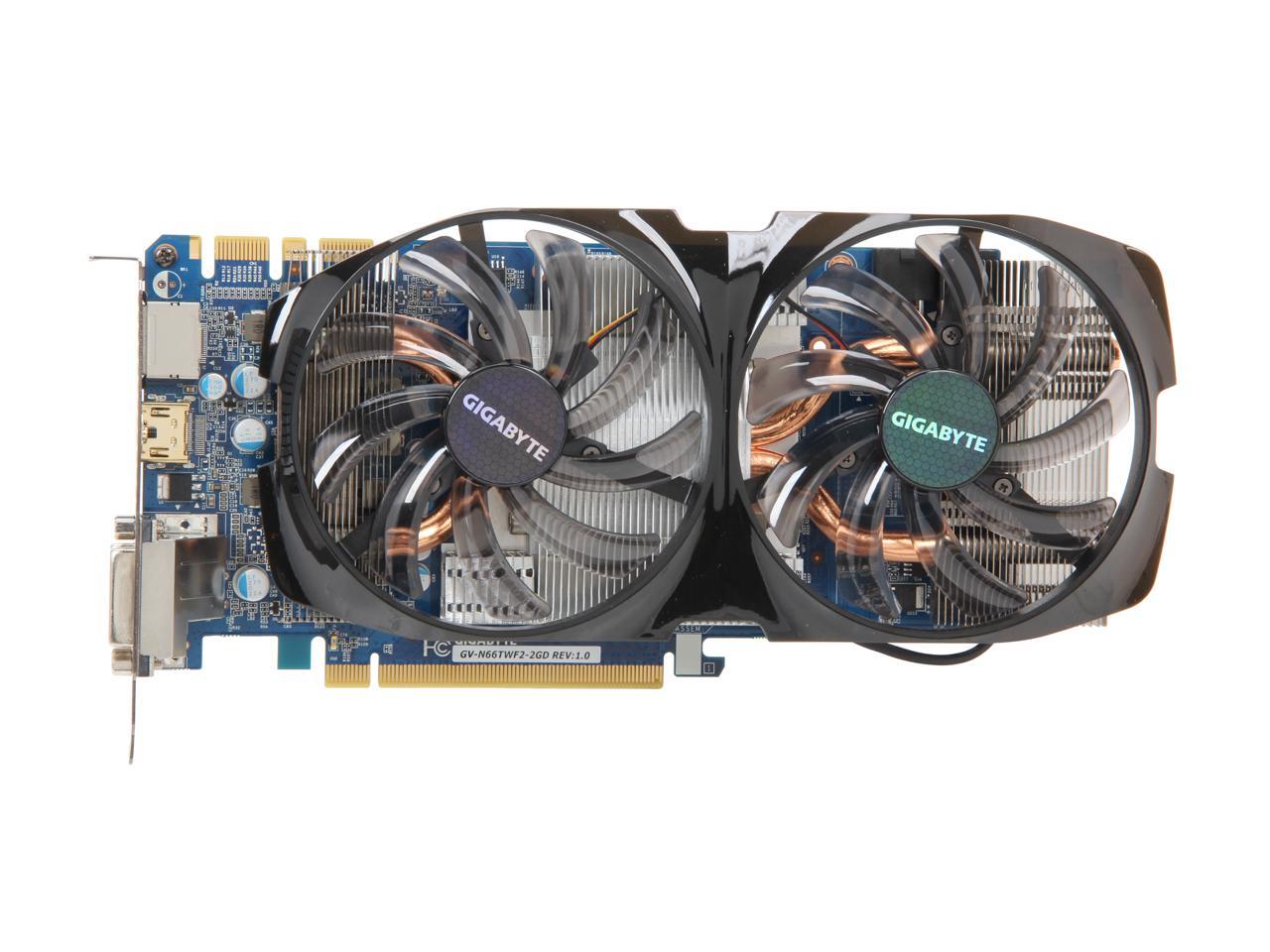 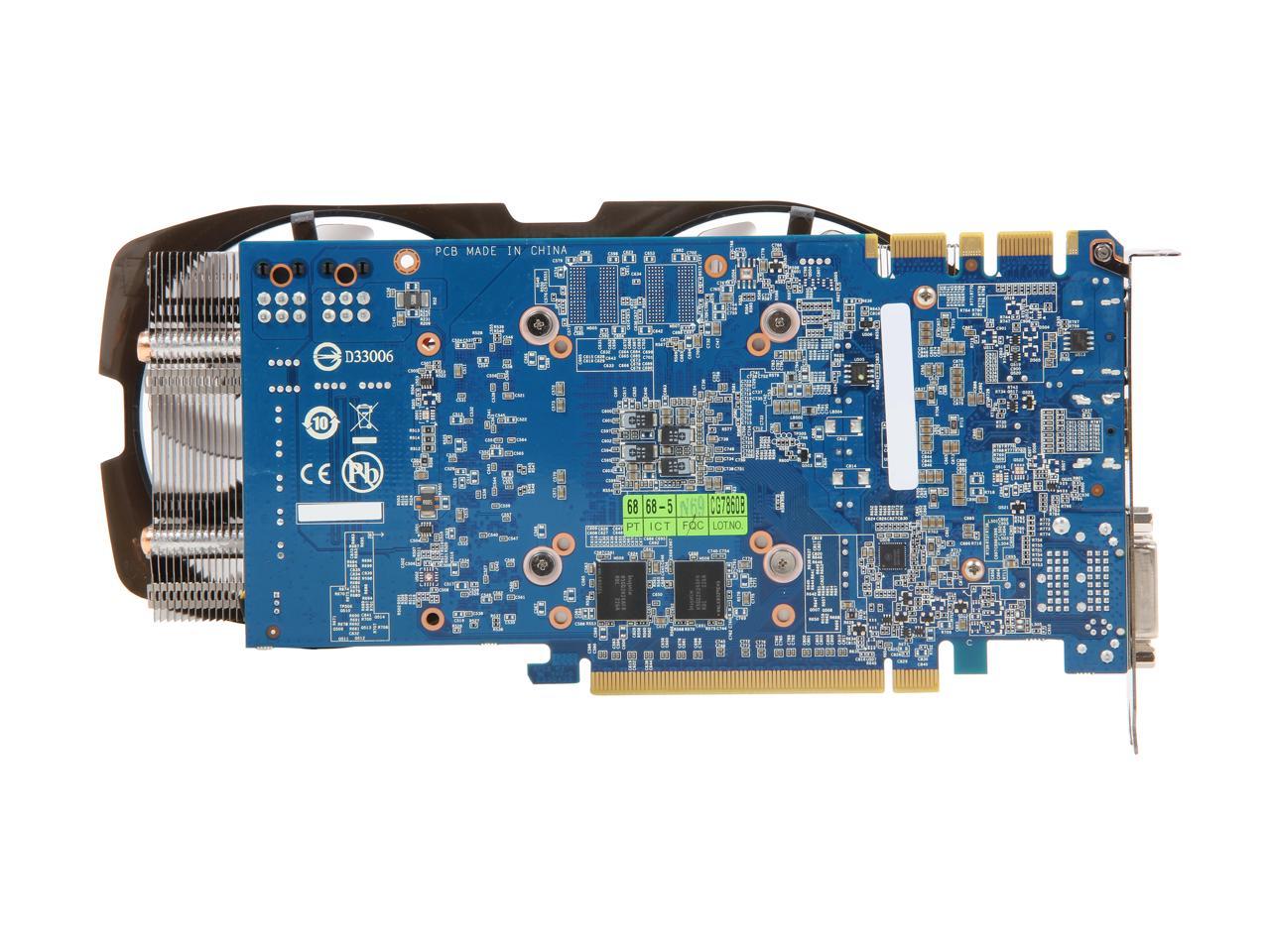 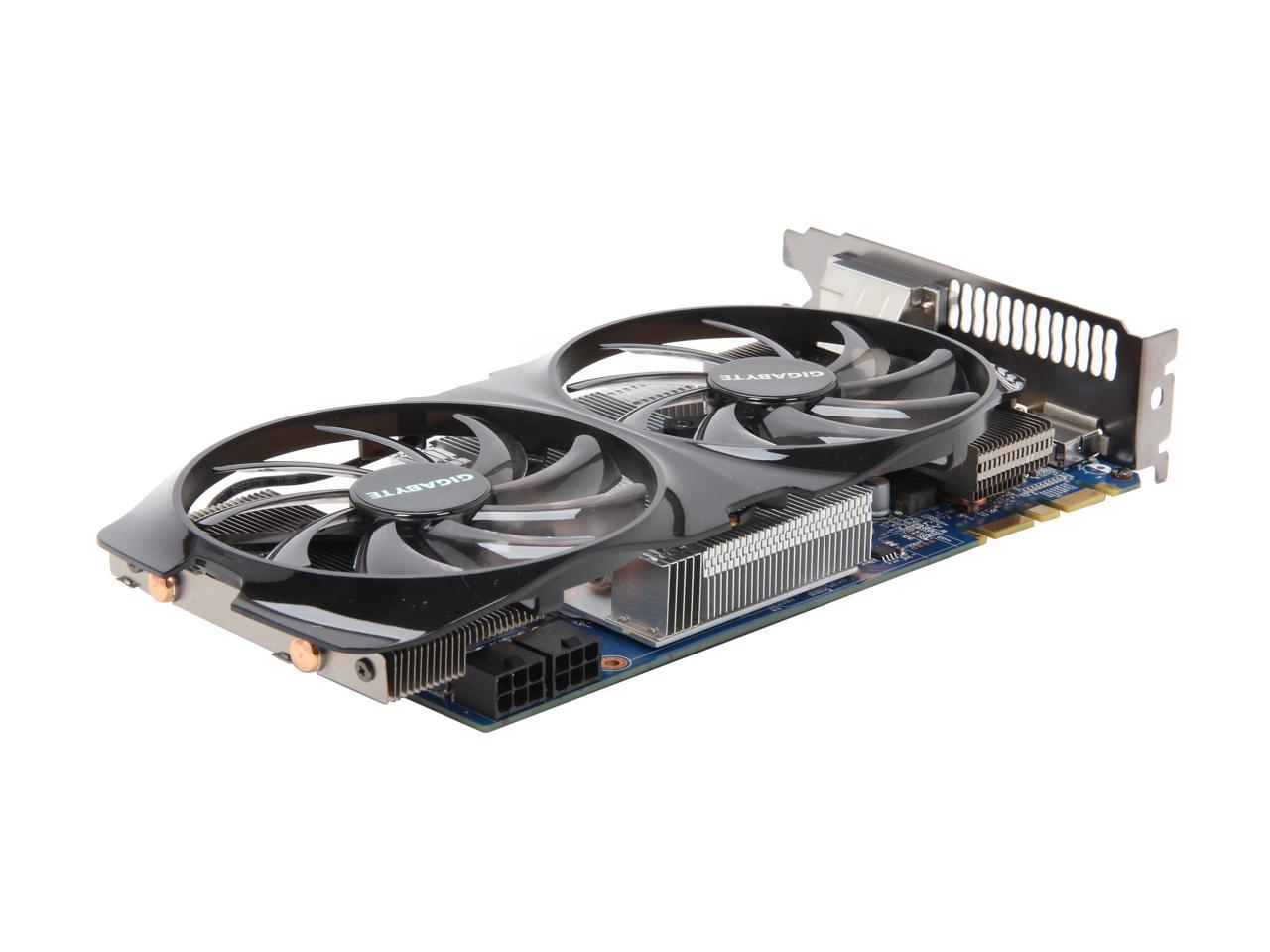 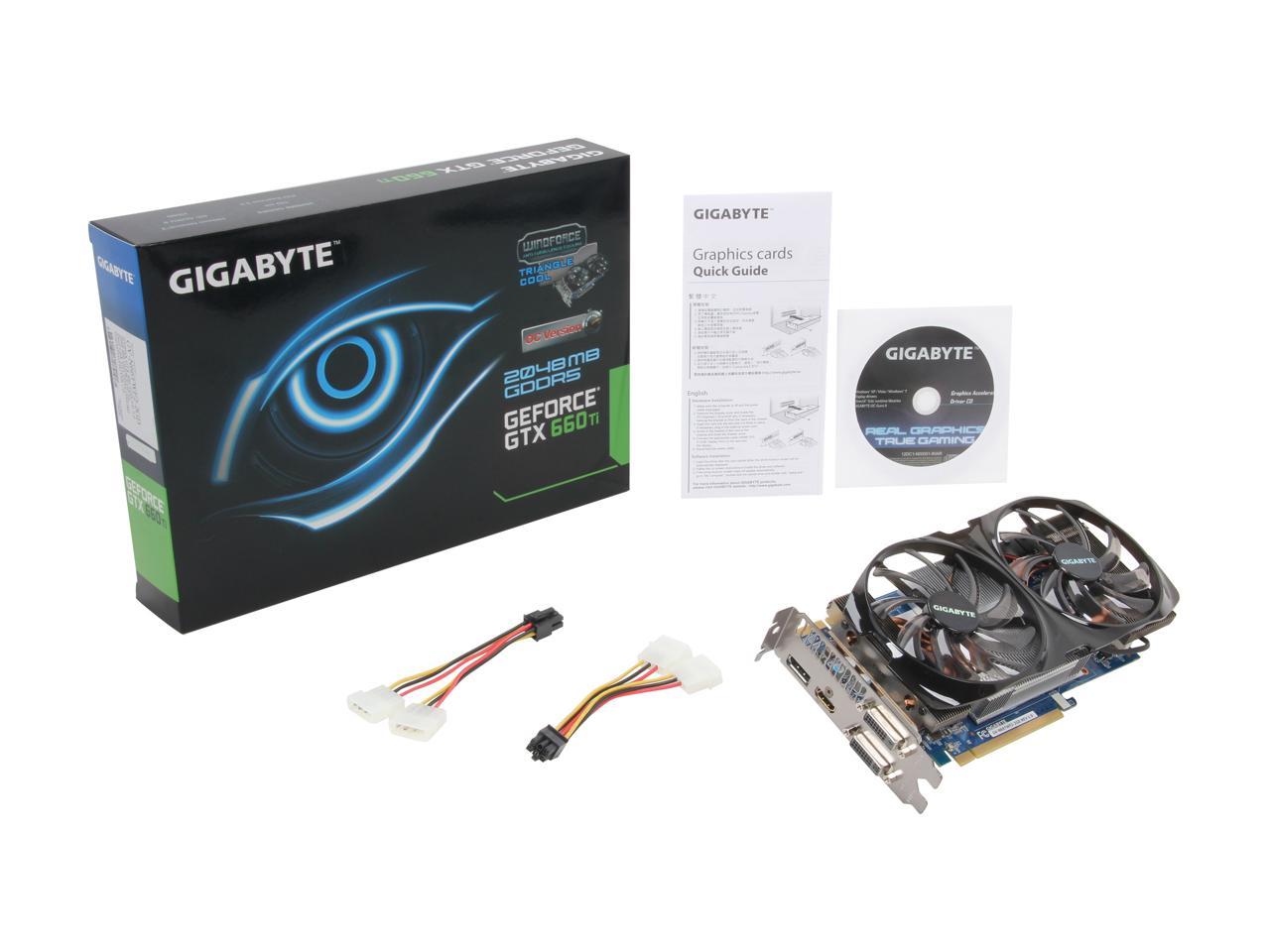 Learn more about the GIGABYTE GV-N66TWF2-2GD

Pros: Super fast card. It's quiet too. Even at 80% fan speed its a hushed whir sound. Generally the fan run at 45-60% in almost all circumstances and would be considered inaudible. The stock Gigabyte OC utility allows you to set the fan to "auto" or "manual". In "auto" the fan was basically idle until temps got above 75 deg. I use the "manual" setting and specify the fan speed vs. temp - I don't want the temp above 69 deg and I set the fans speed accordingly. Excellent framerates in the games I play - no slowdowns or studders. Decent utility software. Excellent X-Plane / FS2004 / Civ4 / Skyrim gaming card. Good combo with AMD FX-6300 CPU. Not a single crash or problem using latest Gigabyte OC utility (downloaded from website) and latest 310.70 Nvidia drivers (also downloaded). Card ran as soon as I plugged everything in and hasn't stopped in a week. After looking at reviews and benchmarks, I decided on the Gigabyte model because of its larger fans - this makes the card run cool and quiet and that was the deciding feature. I am happy with the Gigabyte cooling solution, it keeps the card cool and quiet.

Cons: Uses 2x6-pin PCIe plugs. Not quite as fast as I had hoped (see other thoughts). Uses more power. Slightly louder overall. This is all compared to a recently installed GTX 650Ti. Compared to my original GTX550Ti, both cards are far superior in every way.

Overall Review: I replaced a very nice Gigabyte 650Ti with this card. After reviewing benchmarks and reviews, I deemed this card a worthy upgrade. The 650Ti was a placeholder card until I finished my computer build. That being said, the 660Ti is a great card. However, I was expecting a little more. The 650Ti was extremely quiet, ran very cool and didn't use a lot of power. The 660Ti is a little louder due to higher temps (although the "loudness" is relative - it's a very quiet card overall) and draws more power (this was expected). I am not disappointed by any means, just was expected a little more performance for the extra heat and power. Again, these complaints are relative - my original GTX550Ti was much hotter, louder, more power hungry and much slower in performance compared to the 660Ti. I should have just bought the 660Ti to start with. I believe the 650Ti is a great card, and it's a hard call to justify the extra $100 I spent on the 660Ti vs. the 650Ti. The card is fast - wicked fast. Just not much faster in the games I use compared to the 650Ti. I would not swap it out with the 650Ti however, because it is faster. Here's my example. I primarily built this new system for X-Plane flight simulator. With the 650Ti I had great framerates at moderate settings and medium quality 8xAA. I was hoping, based on reviews and benchmarks, that the 660Ti would allow me to maintain my framerates and improve detail settings and AA. While this turned out to be true, I was only able to bump up the settings one level. Again, I didn't expect a doubling in performance, but I did expect more. It just goes to show that the video card is not the only factor in gaming performance (I only upgraded the GPU - my CPU / mobo / RAM remained the same). With the increase in details that I did get, I also got about 50-75W more power usage (via Kill-A-Watts), about 15-deg increase in demand operating temp (via Gigabyte OC software) and a slight increase in overall case temp (about 2-4 deg) and increase in sound level (due to higher temp, increase in fan speed needed for GPU and case fan). I do have to say that with the 650Ti in X-Plane there were some instances where the sim would slow down a bit and it was noticeable. With the 660Ti there are no slowdowns whatsoever. So, with a slight increase in detail level and AA and a general increase in overall "smoothness", I would say the 660Ti was a worthy upgrade over the 650Ti. That is why I rated it 5 stars. I could overclock the card I suppose and make it similar to the TOC version of the same card, but when I did so, I got about 50Mhz in stable clock speed with no noticeable improvement in any game. My suggestion would be if you're debating a 650Ti vs. 660Ti, just get the 660Ti unless you are on a strict budget - then get the 650Ti if that's the case and in 95% of your games you won't notice the difference. Finally, it didn't make me coffee this am, so that's a con, obviously.

Anonymous
Ownership: more than 1 year
Verified Owner
Died when was needed most, great disappointment.11/2/2014 6:42:29 AM

Pros: I loved this card very much. It was one of the best things I ever had. Good cooling system, really quiet and cool. Short enough to fit in any PC-case. Good performance for all games.

Cons: Until it died, it had no cons. Died after 1 year and 10 months of moderate using and non-intense gaming.

Overall Review: I used to be a professional PC-system integrator. For the last 15 years, I have dealt with about one hundred of Gigabyte MoBos and VGAs, and I have always been confident with Gigabyte... until yesterday. During playing a game, the screen turned black suddenly, which was accompanied by terrible roaring sound from speakers. After a few seconds - darkness and silence. I turned PC off/on - mobo's signal LED and speaker's beep said: VGA problem. Fans work. Interestingly, if you disconnect additional PCIE power connectors, the VGA is still able to show the message like "connect PCIE power to this card". It's good that I still have the old MSI VGA, which I upgraded to this Gigabyte card from, so I can write this "review". I paid $280, which is quite much, and I was hoping to use it at least 3 years. I see here many of these cards die after a year or two.

Manufacturer Response:
Dear Customer, Thank you for your comments. We apologize for your difficulty with your GIGABYTE product. Please contact us at newegg-support@gigabyteusa.com with the case number 115585 in the e-mail subject line. We will provide personalized service and analysis to help solve your issue ASAP. If the matter is urgent, please send us your contact number, and we will contact you. GIGABYTE VIP Support Team
Michael M.
Ownership: 1 day to 1 week
Verified Owner
Great card12/16/2012 8:16:33 AM

Pros: This is a great card. Stays cool and has a quiet fan. Haven't tried overclocking yet because this card has handled every game I've tried at max settings. Really good value for the price (for a GeForce card)

Cons: Everyone should know that this does not come with Assassin's Creed III. The offer has expired but is still showing on this page. I would take off an egg for misleading advertising but it has nothing to do with the card.

Pros: Quiet, very good cooling, price/performance ratio. able to tell the difference if you are the average gamer. Always buy mid-range, because this card is like 1/2 of the GTX 680... and I doubt the average gamer would be to tell the difference. My GTX 280 started to have issues (google pink/green screen of death on Nvidia cards) that started after I played Smite for a while. If your card's fan is audible when you game it's probably time for an upgrade. The GTX 280 would get extremely hot while playing Smite.

Cons: I don't think there will be any for a while. I've had many Gigabyte made computer hardware items that have never given me trouble. The quality of this card is legendary.

Overall Review: Upgraded from a GTX 280 to this. Games such as Smite, Borderlands 2 and Assassins Creed 3 don't even make the fans speed up. The card Card doesn't get past 51 C on these games. I have never had a card that doesn't feel warm (yes I touch my card to see how hot it gets during gaming). Haven't noticed any frame lag in any of the games I've mentioned.

Cons: Only 1 DVI output with analog which forces my configuration to show post/bios information on my secondary monitor analog monitor. No reason to take an egg off but I slight annoyance. Overclocking program (OC_GURU) that came with the card doesn't do anything... Literally it opens and doesn't seem to read the card. I don't really intend to overclock but I thought that was lame. I even tried downloading it from gigabyte and re-installing.

Pros: The cooling is amazing on this card and considering how powerful the card is, very great combo. The OC Guru II, the software that you can download is amazing as well, its a HUB for everything Overclock, tech support, driver updates! very easy to use! Fans are quite! so far ive played assassins creed 3, borderlands 2, max payne 3 and batman - arkam city, every one of them cranked up to ultra settings including phsX batman - no dedicated card needed! amazing frames! Oh the promotion i got bl2 and assassins free, you cant beat that!

Cons: absolutely nothing so far!

Overall Review: I'd recommend this card to anyone! that was a cheaper option and wants to play with hardcore settings!

Pros: -The Gigabyte cooling design is amazing, I have not seen the card over 55c with a 100mhz overclock on the core, even during 100% load. The fans are silent at 40% speed, and sound like like a rocket ship at 100% speed, but I have yet to see them go that high during a real world application. -The price was great, especially considering I got a free 60 dollar game (Borderlands 2 promotion). -This particular model doesn't have the greatest stock clock speeds, but it was like 30 bucks cheaper than the higher OC version with the same cooling solution so I just went with this one. Great OC potential. -The Kepler architecture is simply astounding. Power consumption to performance ratio is amazing. I'm not sure exactly how many watts this card is demanding at full load, but I know it isn't very many. It doesn't draw as many watts as my 550ti did and this card is almost twice as fast. -The Adaptive Vsync feature is great, I noticed very smooth game-play when I turned this feature

Cons: Can't really get a stable overclock on the memory, even with a small 50mhz increase I got very bad artifacting during 3DMark11. The card made a very loud whining/ticking sound (coil whine?) when I was running benchmarks and during some games. I read online that if I were to turn on the performance along with adaptive vsync settings in the Nvidia Control panel that it would stop, and it did for the most part, can still hear it sometimes but it isn't too annoying.

Overall Review: I really like the blue PCB of Gigabyte mobos and graphics cards, I hope they keep those around. This card replaced a 550ti everything about this new card just blows it away. Can run all of my games at ultra settings with full AF enabled with decent framerates, but when I turn on any level of AA it slows right down (but that is to be expected)

Cons: It died about a month ago. Had the card for over a year.

Overall Review: Gigabyte RMA this card and it should be here in about a week. Just goto the website and request RMA.