OUT OF STOCK
Sold by: Newegg
Shipped by Newegg
This item is currently out of stock and it may or may not be restocked.
Out of Stock
Add To ListFound on 3 wish lists 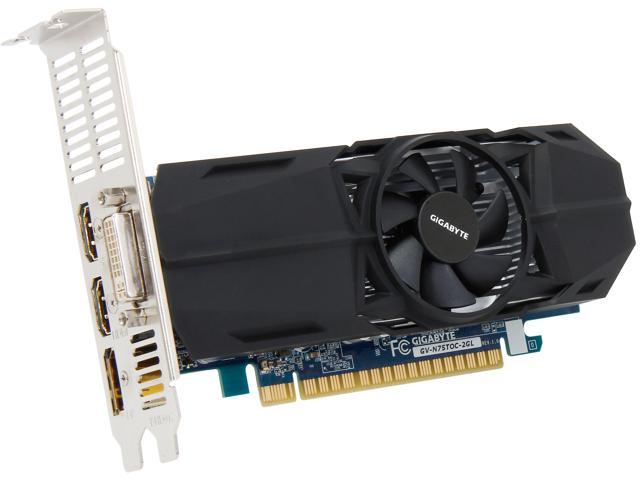 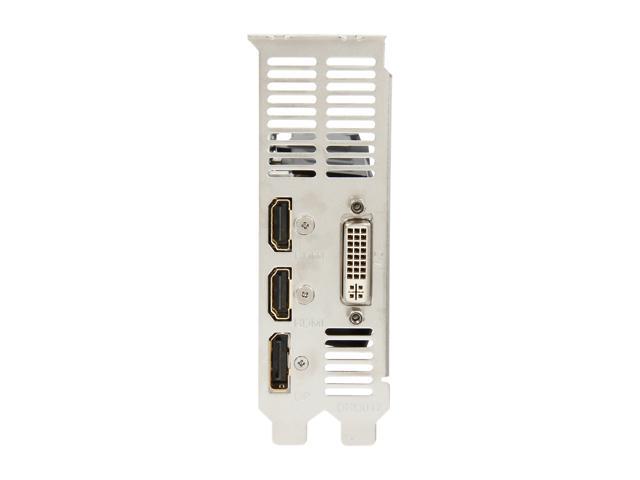 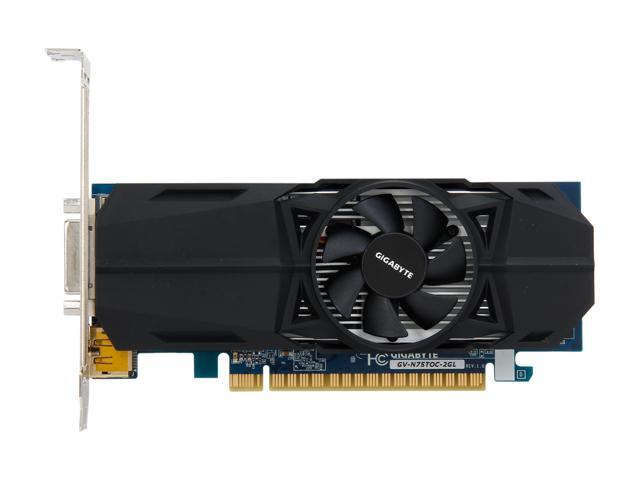 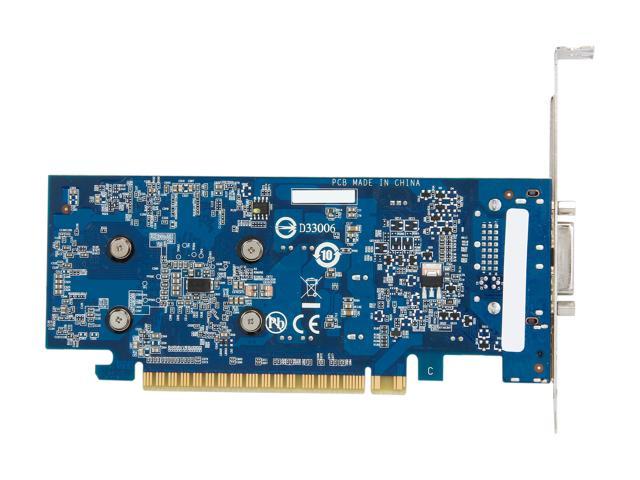 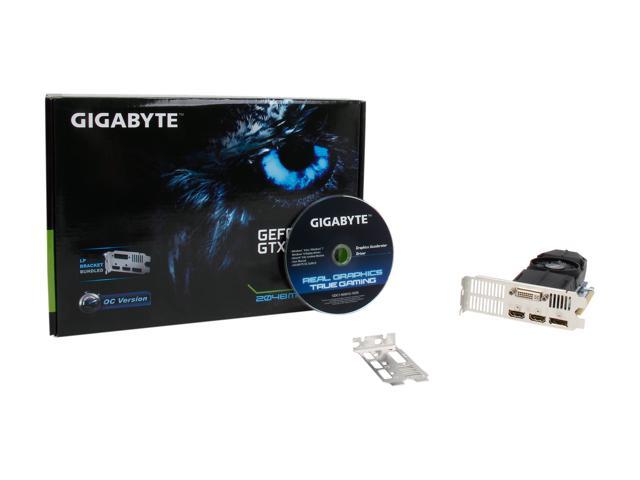 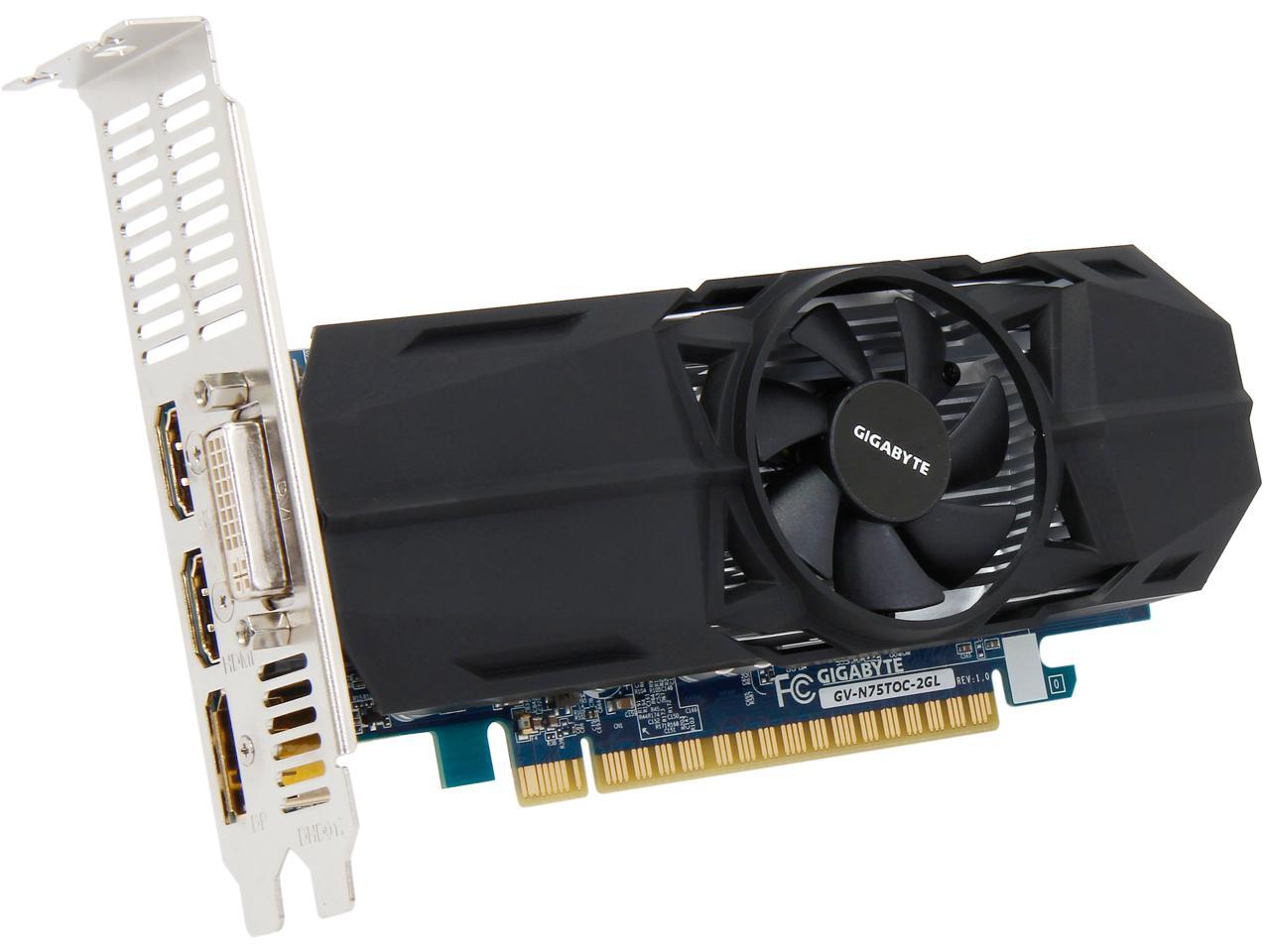 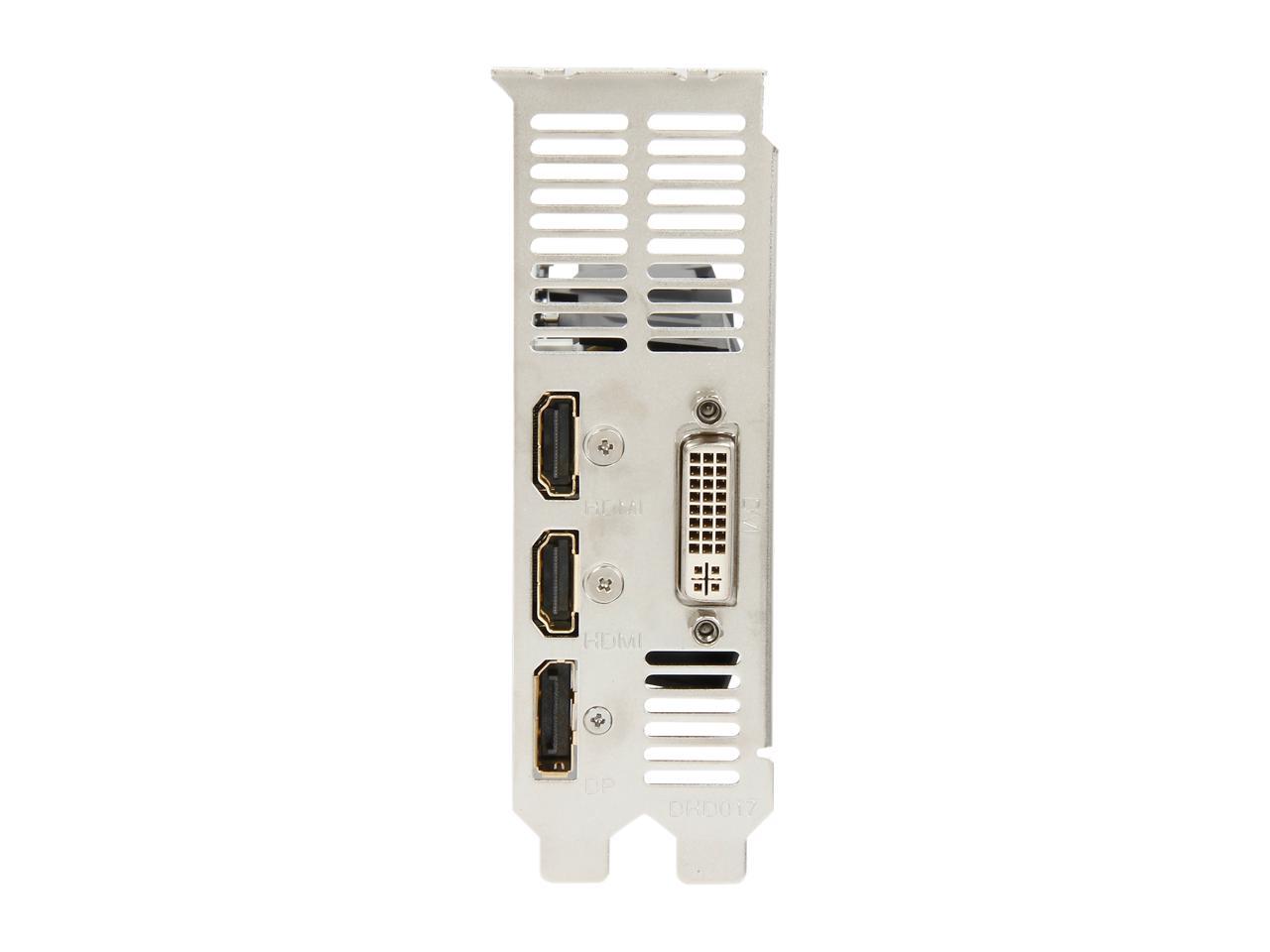 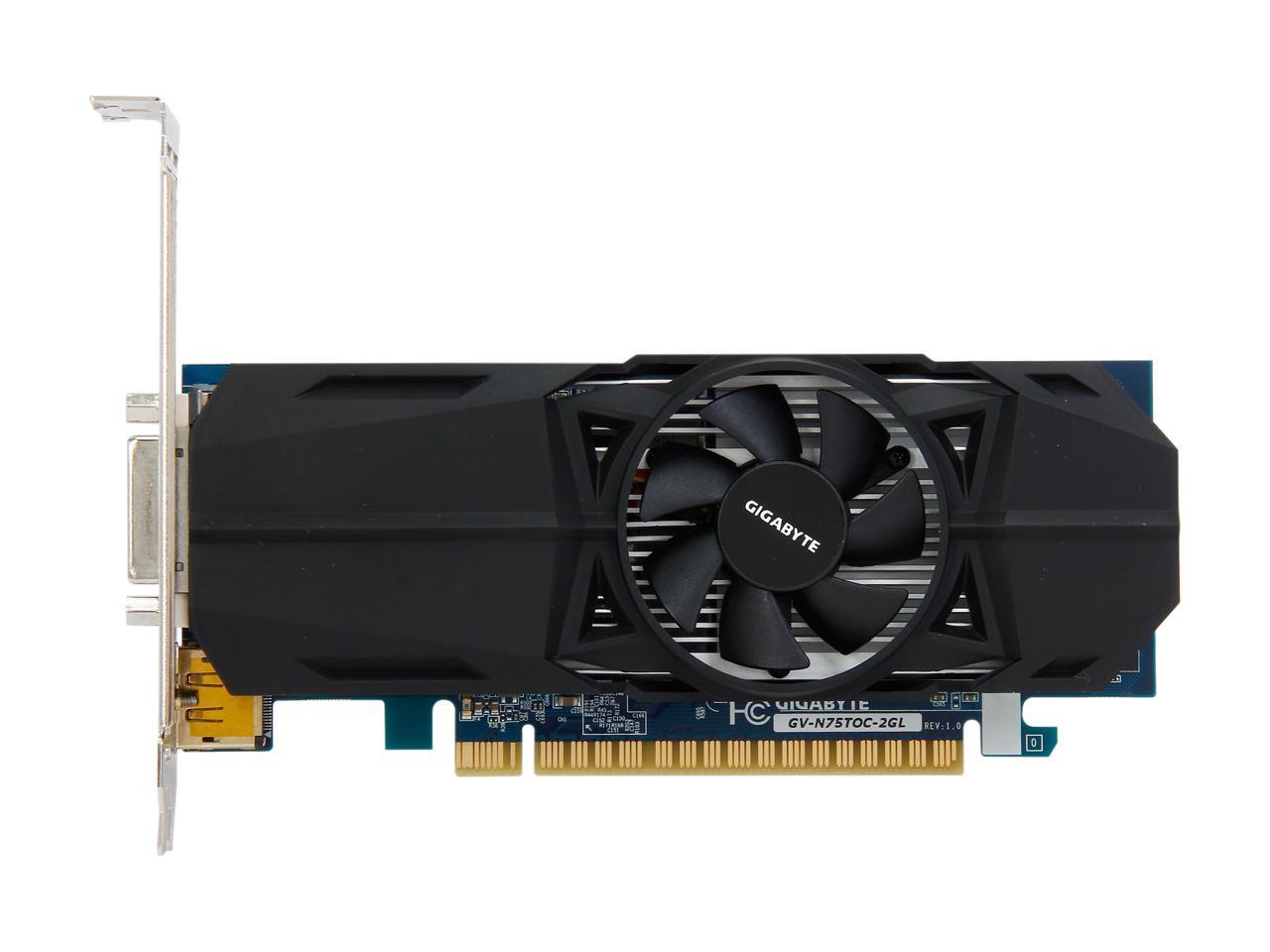 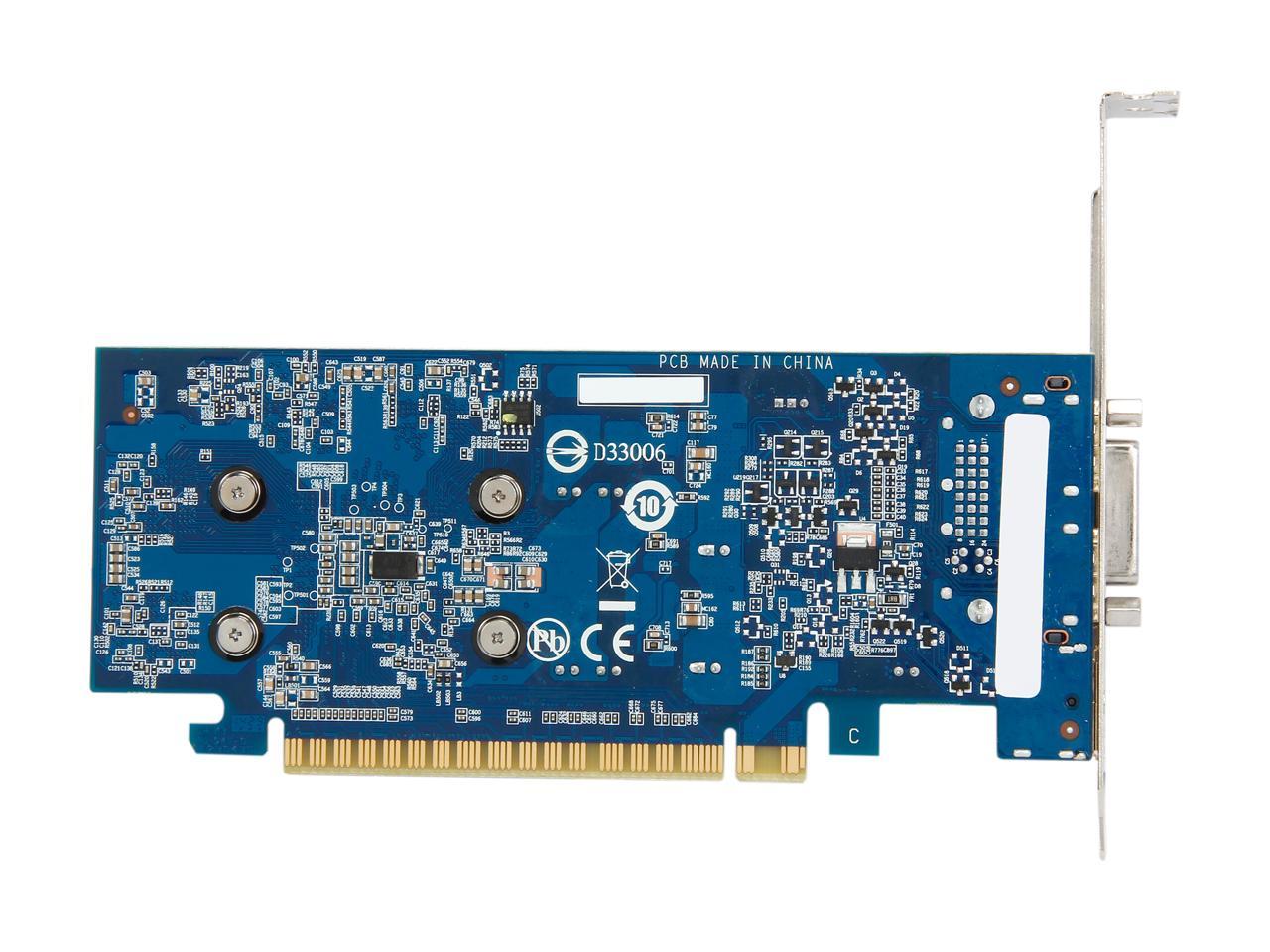 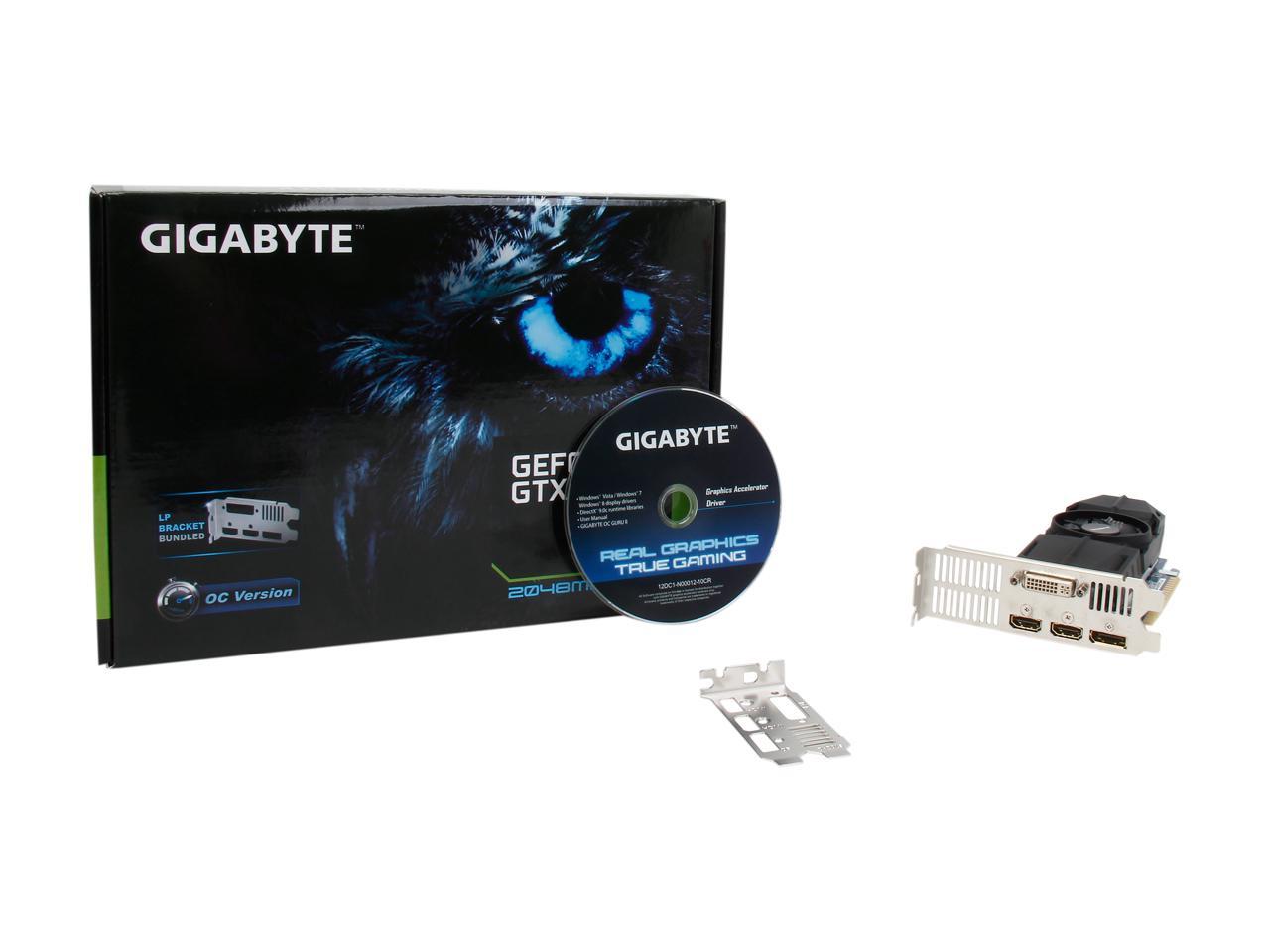 A new choice of weapon for serious gamers, the GIGABYTE GeForce GTX 750 Ti delivers powerful performance at an incredible value. Based on the next-gen NVIDIA Maxwell architecture, the GTX 750 Ti boasts 640 CUDA Cores and a 2GB GDDR5 memory that work side by side, delivering twice the performance at half the power consumption of previous-generation GPUs – you can effortlessly game in Full 1080p HD in today's most hot titles. Plus with GeForce GTX gaming technologies, like NVIDIA GPU Boost, G-SYNC, and GeForce Experience, you'll get a fully evolved experience in your PC gaming.

This model is slightly factory overclocked to Base 1033MHz/Boost 1111MHz (Standard - Base:1020MHz/Boost:1085MHz) for smoother gameplay, and features a Dual-link DVI-I/DisplayPort/two HDMI ports for easy multi-monitor setup. 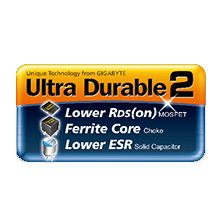 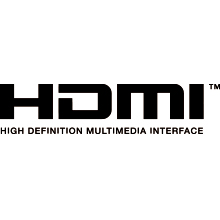 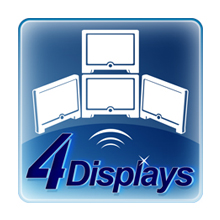 Up to 4 Displays on a Single Card
Support up to four displays on a single card. Satisfy your multi-screen setup, high definition and extreme gaming experience. 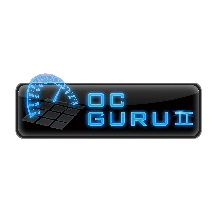 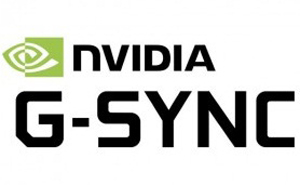 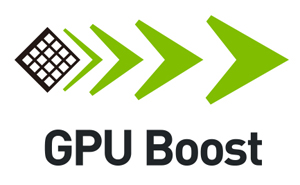 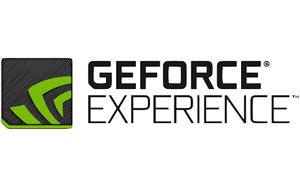 GeForce Experience
The easiest way to optimize your games and keep your drivers up to date, the GeForce Experience application automatically notifies you of new driver releases from NVIDIA. With a single click, you'll be able to update the driver directly, without leaving your desktop. Plus, it offers exciting features like GeForce ShadowPlay that lets you capture and share your greatest gaming moments, automatically. 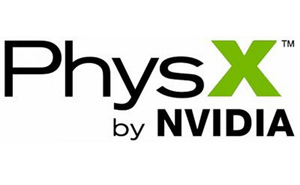 Learn more about the GIGABYTE GV-N75TOC-2GL

Pros: pro changed my hp business compaq I5 2400 desktop into a gaming pc, for the games i play csgo, skyrim,starwars the old republic and starcraft 2. just in love with this card

Cons: none, havent had any trouble with it at all

Overall Review: I would recommend anyone this card that has a 260watt power supply since this card doesnt need much and that is what my pc uses

Pros: Needed to connect a 3rd monitor and needed a card that would support this configuration. This card was easy to install and worked with no problems. Nvidia software is easy enough to use to get my monitors properly configured, and I had everything up and running from start to finish in less than an hour. I'm not using this for gaming, so I can't report on performance, but overall ease of install/use is fine for my needs to support 3 monitors. I used 2 HDMI ports and 1 display port and it worked like a champ, so I'm not sure what others are talking about with it not supporting multiple monitors on all of the ports?? I didn't try a 4th monitor on the DVI port, but my assumption is that it too would have worked.

Cons: When I received the order, it was clear that this was not a sealed/new video card. The box had been taped shut, so I was not thrilled about this. However when I opened it, everything was in the box and appeared to be in new condition, so I'm not sure what was going on with the box having been previously opened. Also, as others have mentioned, the software install is a bit clunky. Part of the install failed, but the drivers installed fine and everything worked.

Overall Review: I've configured LOTS of dual monitors over the years, but this was my first 3 monitor configuration, so I was a little uncertain about how difficult it might be, but this card seemed to make it pretty easy.

Overall Review: So here it is. Be aware that this card's basic driver can corrupt your entire system. I know it is not with all the cards, but the one I got actually destroyed my ssd and windows OS. After putting my HTPC together, windows kept becoming corrupt. put in another of the same card and for some reason it worked. After RMA'ing it everything was fine. *update - Card Still works about a year later but crashes time to time while watching movies.

Pros: Connectors! This card has a bunch, including full size HDMI (great for Home Theater use) and DisplayPort (maximum convertibility) Noise! What noise? It's really very quiet, even when it's getting thrashed. Heat and power consumption! Very cool, and very efficient. (I've got it practically suffocating in a very cramped case, in a poorly ventilated AV cabinet, but it still manages to turbo boost no problem. Max temp I've managed is 75C running furmark) Powaaaah! Gratuitous. These Maxwell chips don't mess around. I can't remember FPS's off the top of my head, but I haven't had it choke on anything I've thrown at it yet. (not necessarily at uber-maximum settings, but definitely high enough to dazzle)

Cons: Any downsides would be entirely platform specific. I'll mention them in other thoughts.

Overall Review: This card is dual slot. Low profile? Yes. But it still takes up two slots. 2GB of RAM may start to show its inadequacy on the very latest of games. I suggest this be used for HTPC applications, namely because the RAM is hit pretty hard by anti-aliasing, which isn't as necessary from 8ft away on a large TV.

Pros: Its a 750 Ti in a low profile card. Performance is the same as other full 750 Ti cards. Stays cool and only draws 68W at peak load!

Cons: Took one egg off for a few reasons. 1. Fan wasn't plugged in when which could have caused problems if it wasn't caught. 2. The fan plug header was detached from the pcb as well. 3. The packaging could have been better. 4. One of the screws was stripped. 5. The card looked like it was taken out of the box and used before I got it. Other cons that's not the manufacturers fault. Shipping was super slow and got shipped around to places that didn't make sense. Other reason that's not the manufacturer

Overall Review: Though it might not be needed, I would have preferred 2 fans like the other manufacturers use on these 750 Ti LP cards. I would have also preferred the MSI variant, but they were sold out at the time of perchance. This isn't a bad option though. Build -HP elite 8000 SFF -C2D Quad Q9550 -8gb DDR3 1600 -240W 89%E Power supply.

Pros: Great Low Profile card. I have bought 3 of these now and use them to revive older Intel Core 2 systems. Runs Fallout 4 at 60+ fps on high presets with medium shadow quality, medium shadow distance, medium godrays quality, and increased object fate level. This is double the frame rate of Xbox or PS and runs smooth with no Over clocking needed. Used it on BF4 with even better results. Current PC has 420 Watt PS, 1920 x 1080 resolution, Core 2 Quad 3.0Ghz CPU, Win 7 64, 8GB Ram.

Overall Review: This gets all its power from the PCI slot. No need for extra power connectors, but it is recommended to have a 400Watt power supply.

Pros: I am not playing any newer games, but pretty much everything I play once you disable anti-alising, everything seems to work just fine. Older 4+ year old games can be played at max settings. 1080p movies are no problem. This card isn’t really about gaming though, it’s about getting the most out of a low wattage PSU, and that it does! I am using a 5+ year old emachines non-80+ 220 watt PSU , and I haven’t had any issues with this card. I had a HDD crash, but it is a Seagate so it might have been faulty to start.

Cons: It gets a little toasty, I have not had any actual signs of overheating, but I wouldn't let anything touch it. MSI makes a low profile 750ti with 2 fans. Which would be better for cooling.

Pros: This is a great card for an HTPC build. Only draws 55watts under stress. Runs Dying light at 50fps on medium. Have 2 monitors running off of the HDMIs. very beautiful. Colors are very vibrant. Maxwell chipset, way out performs previous generation Kepler. My Evga 650ti was about 75% of this cards performance.

Cons: None so far except I can't max out all my settings, but everything looks pretty anyways with Direct X 11...so No worries, really...:)