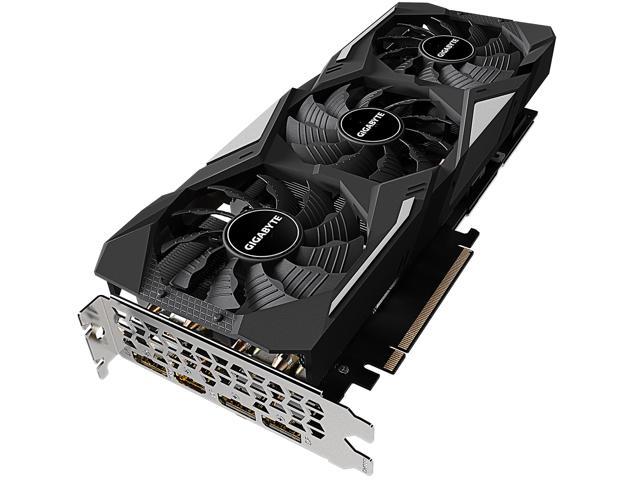 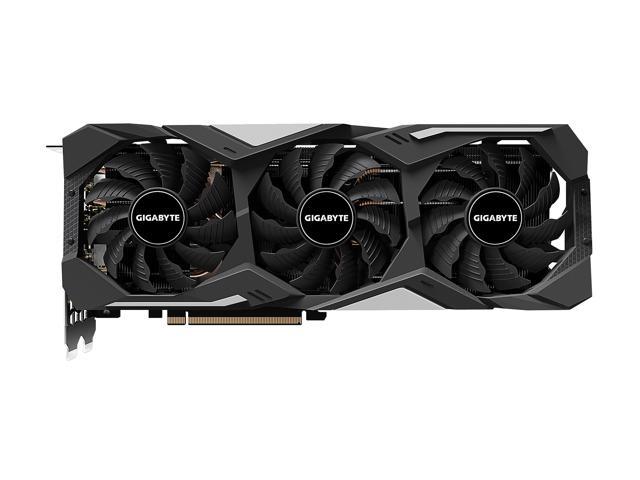 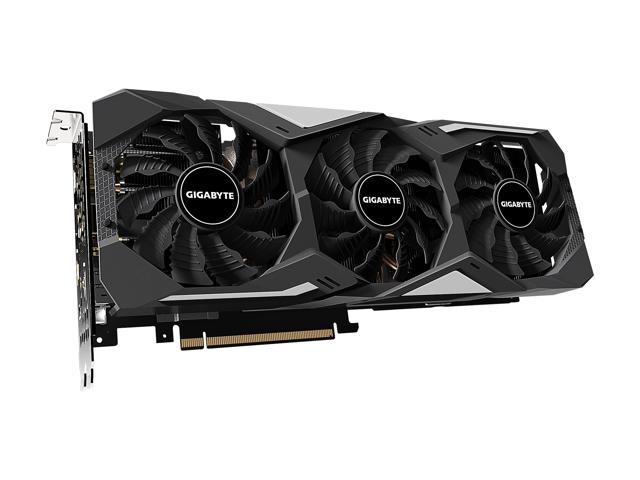 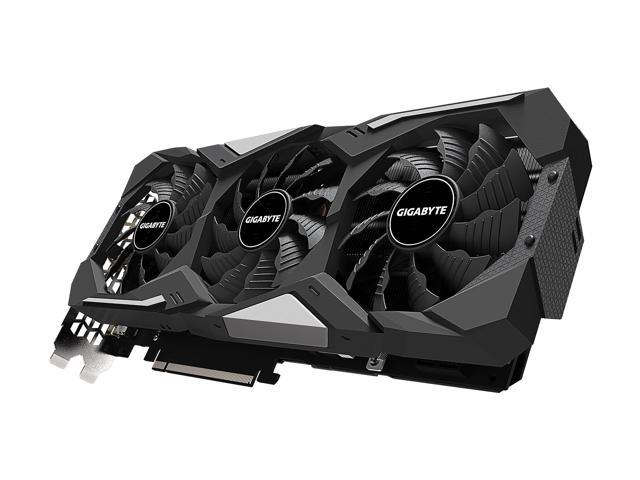 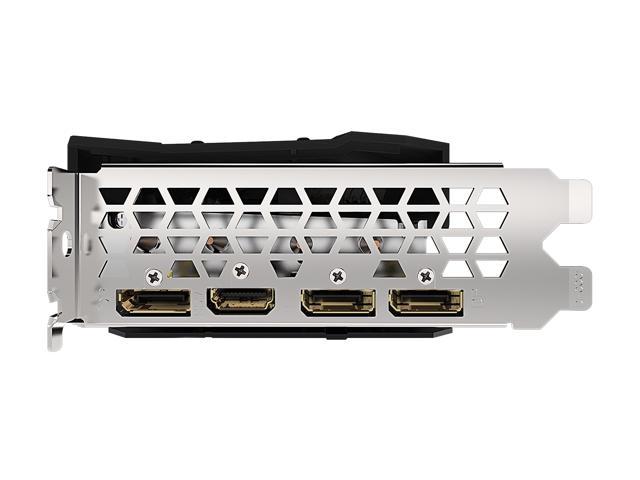 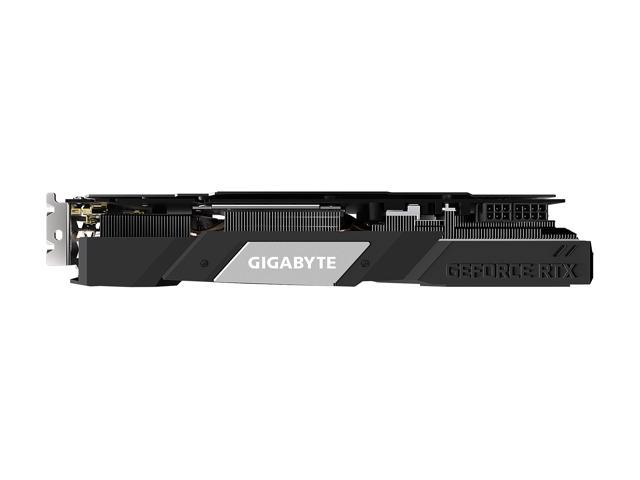 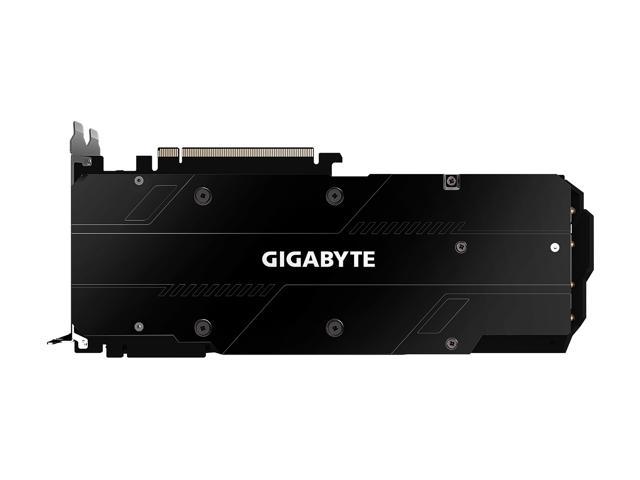 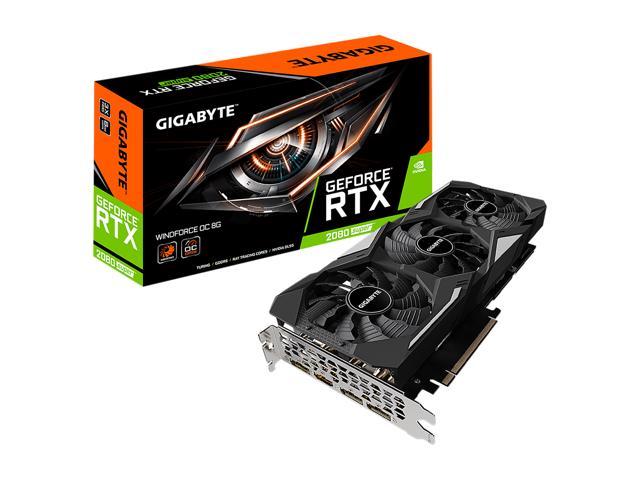 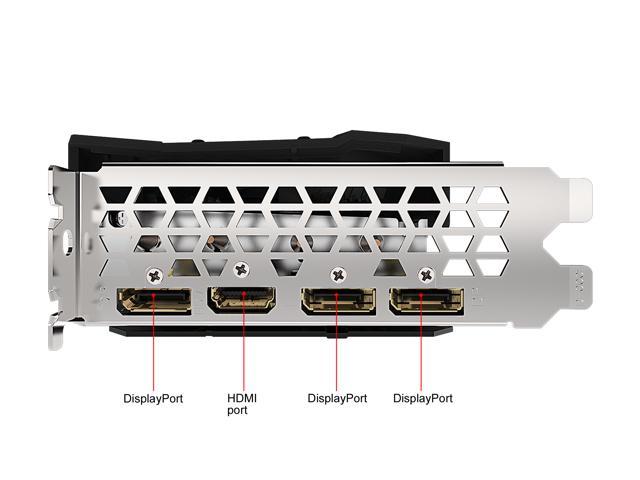 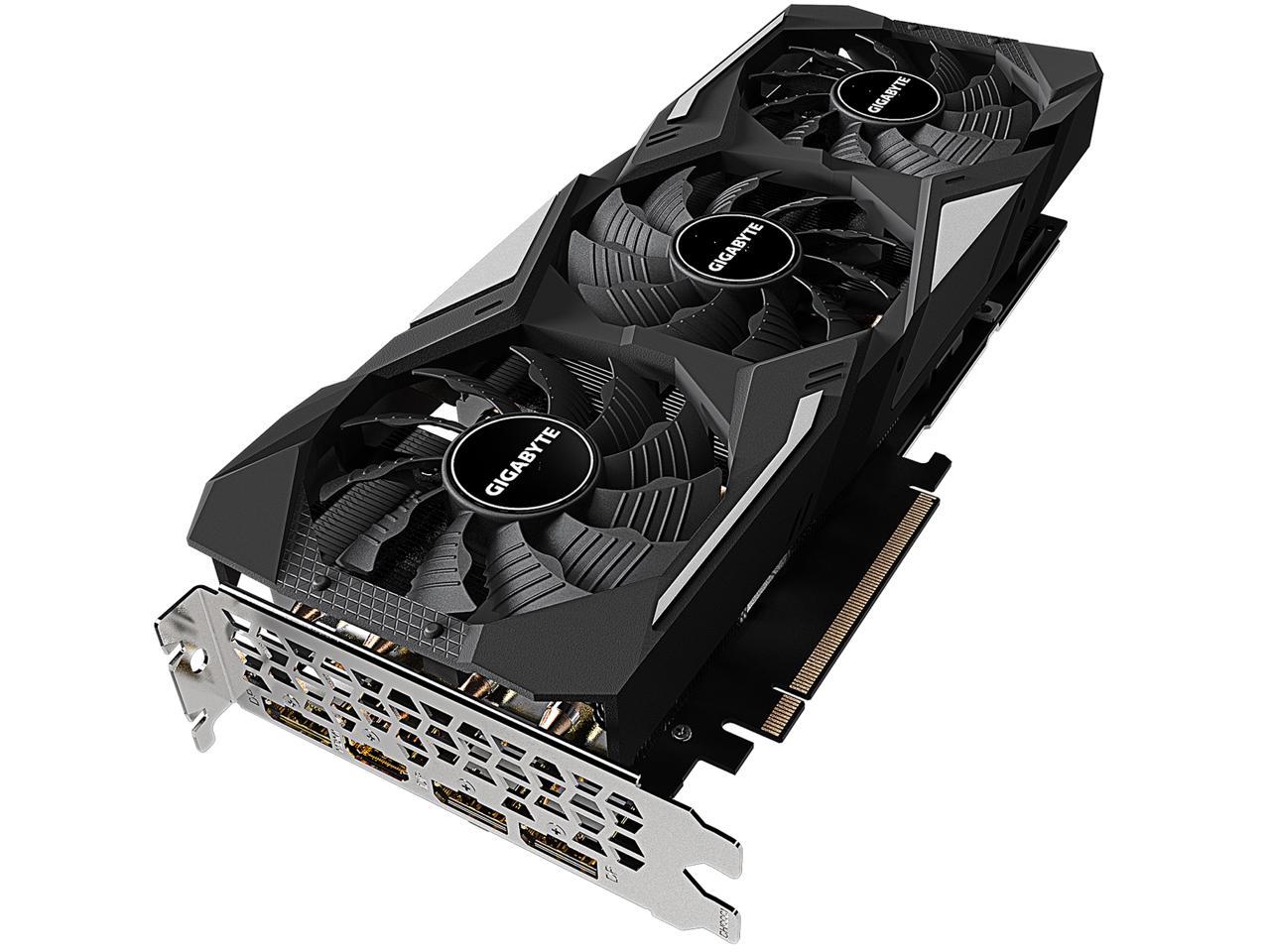 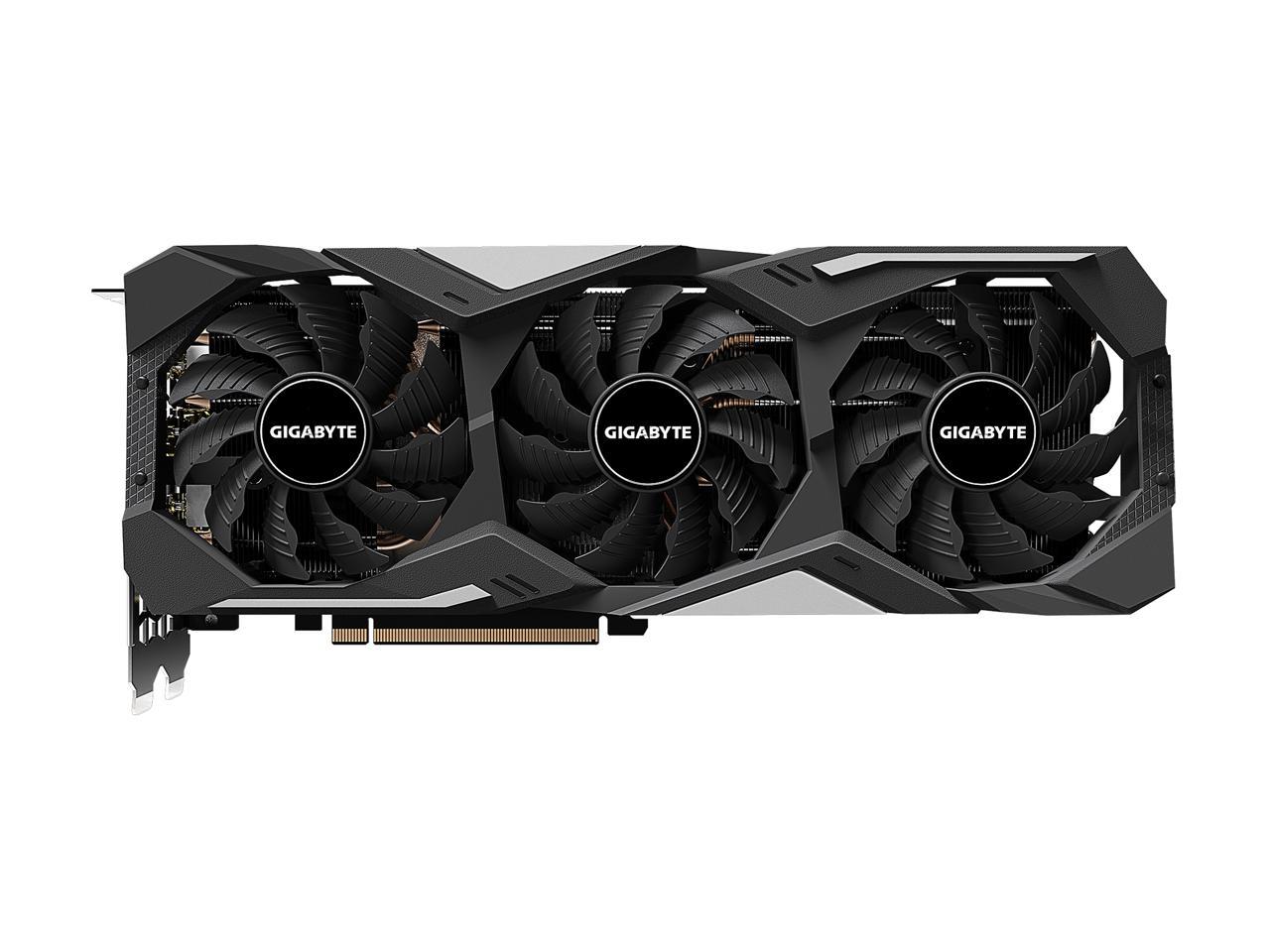 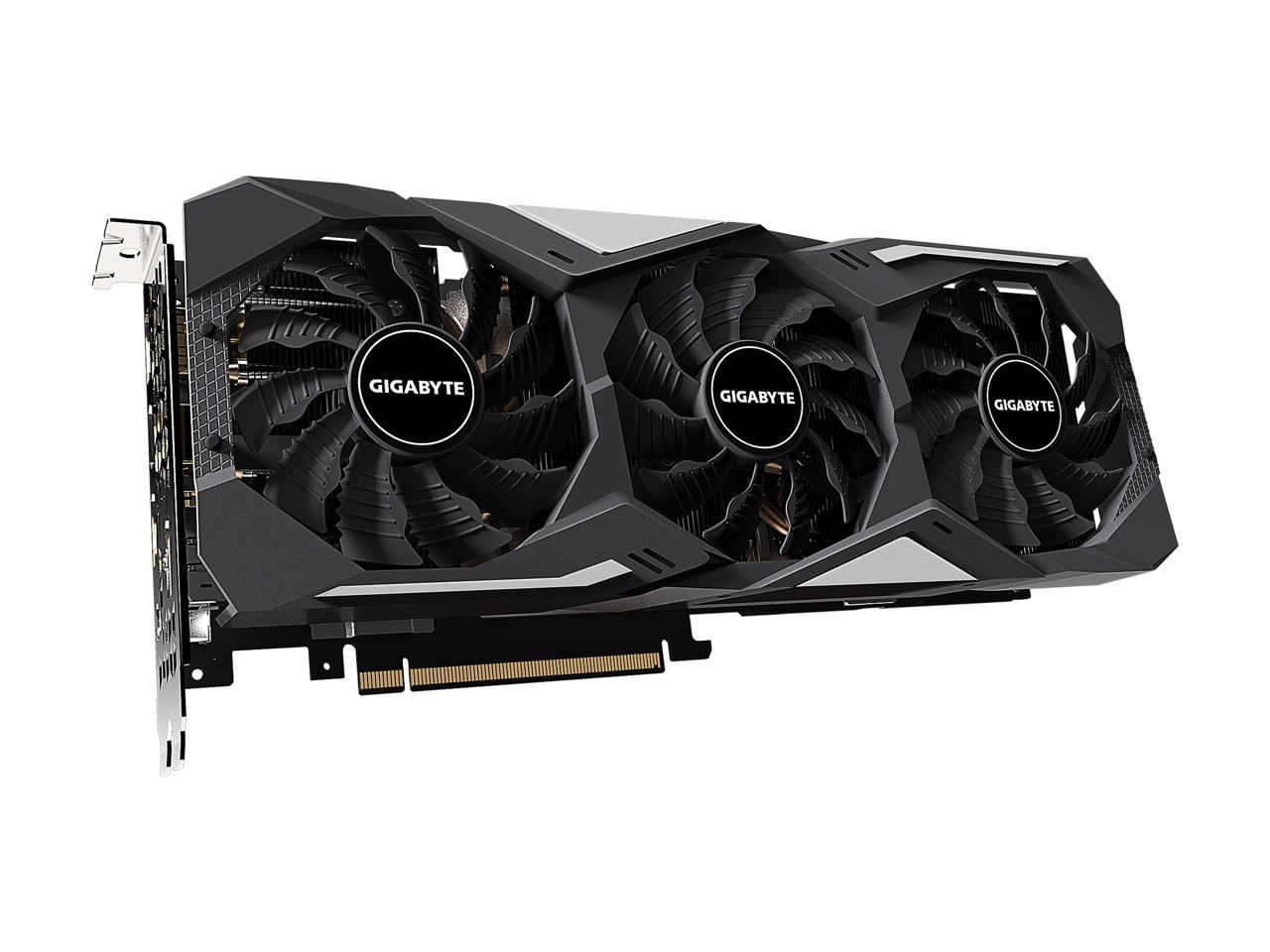 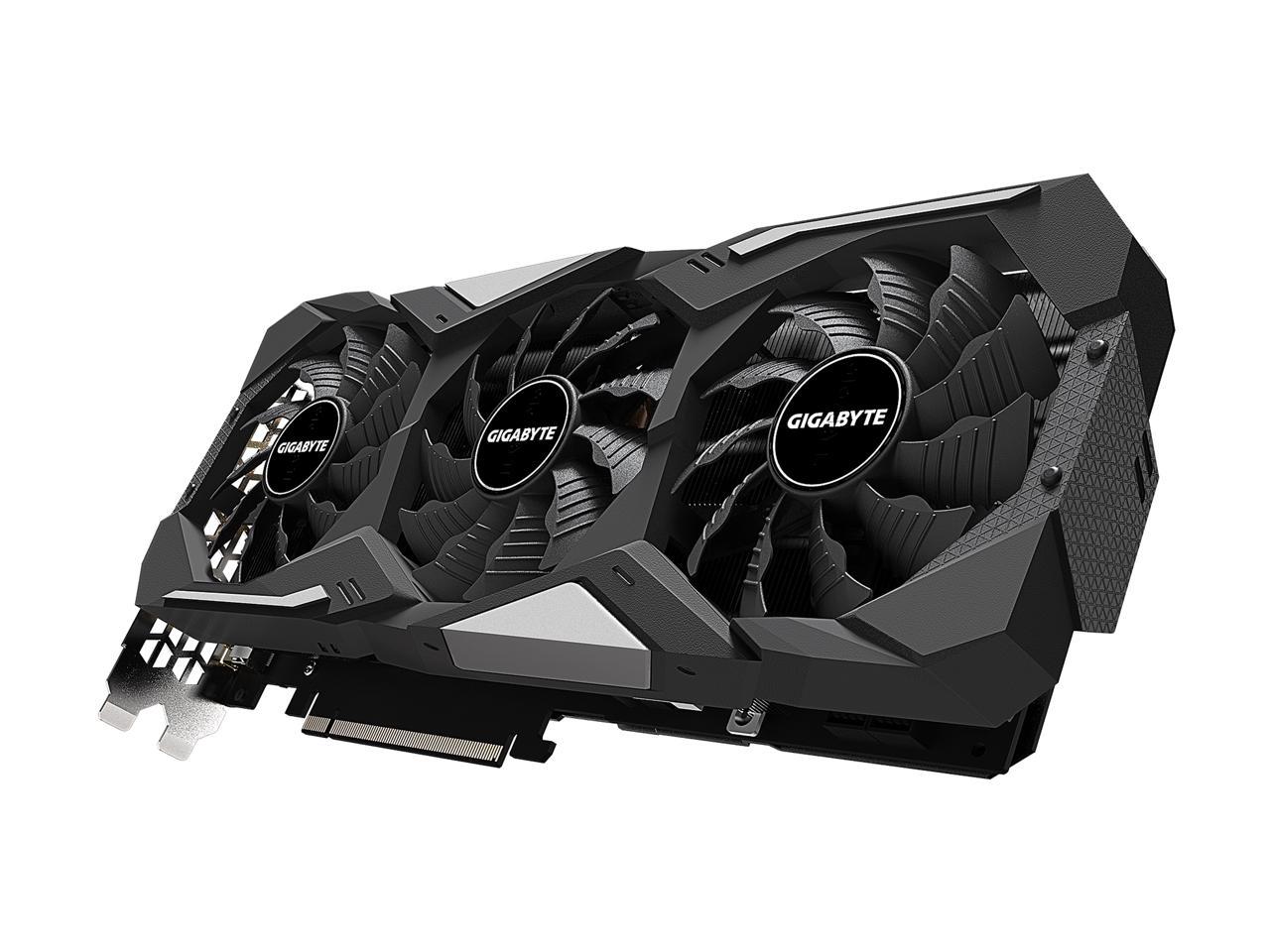 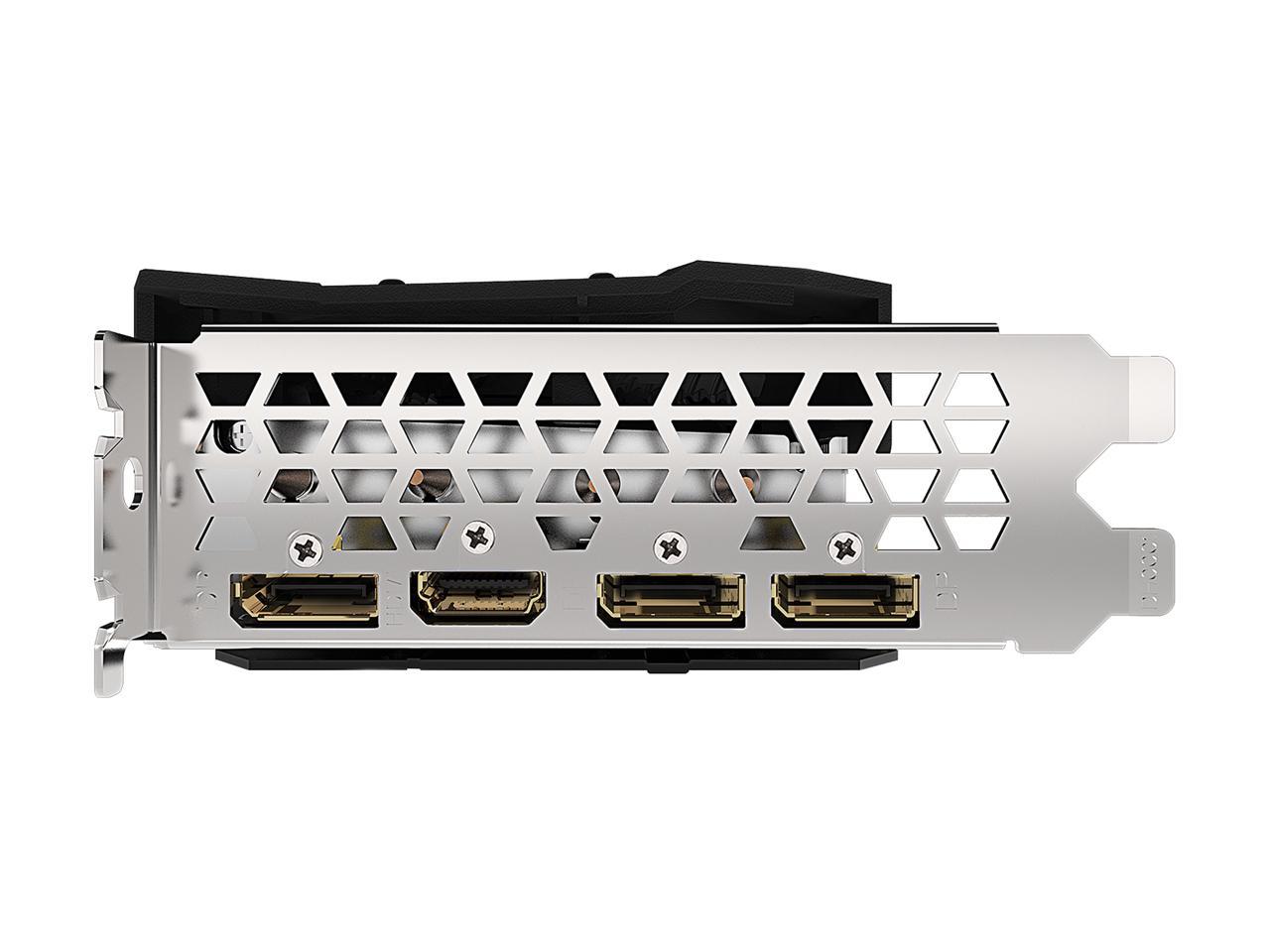 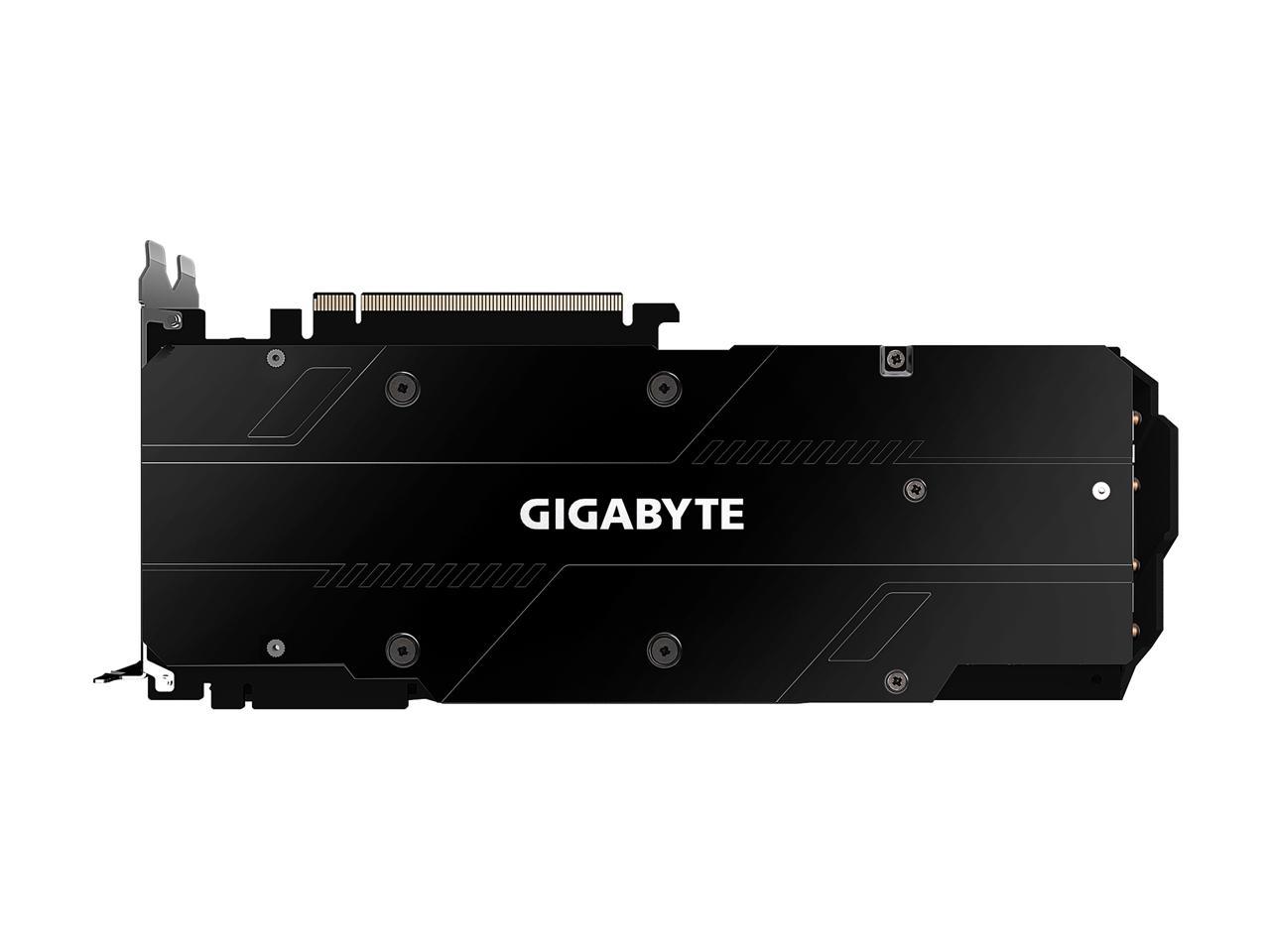 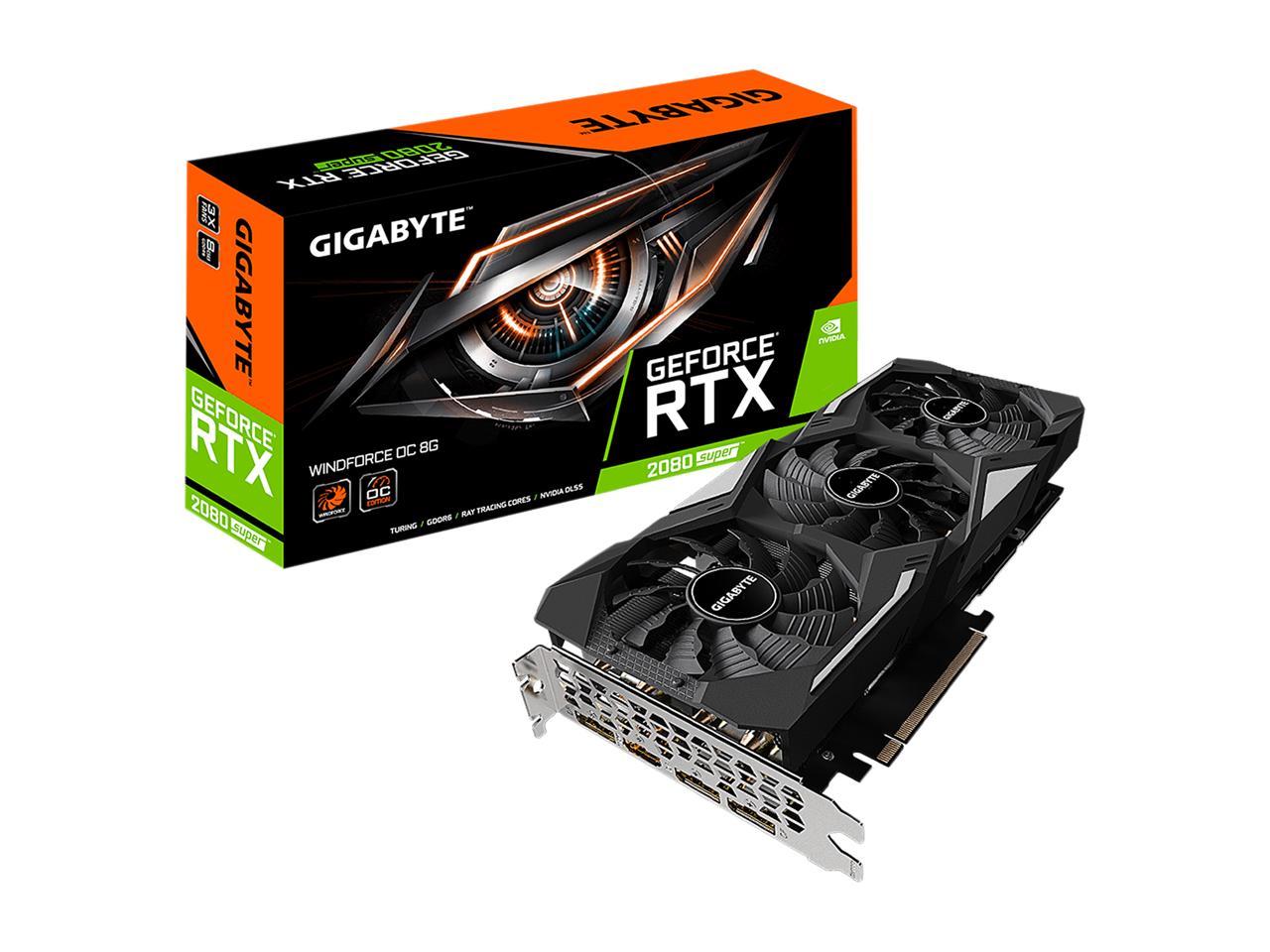 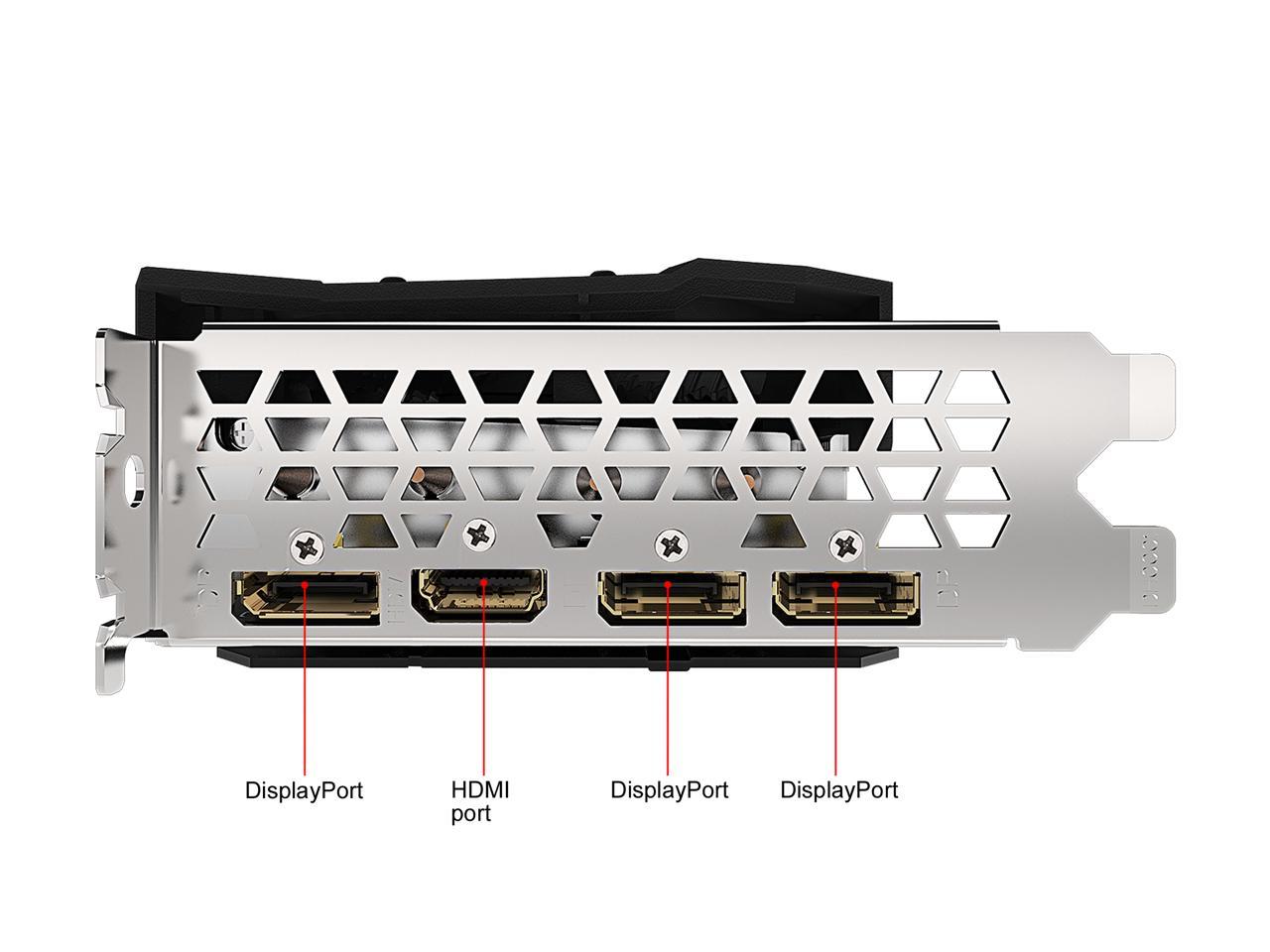 GIGABYTE's “Alternate Spinning” feature is the only solution that effectively solves the turbulent airflow of three fans. The biggest problem with the three fans is turbulence. Since the fans rotate in the same direction, the airflow direction is opposite between the fans, which will cause turbulent airflow and reduce heat dissipation efficiency. GIGABYTE turns the middle fan in the opposite direction, so that the airflow direction between the two fans is the same, reducing turbulence and enhancing airflow pressure. Airflow is split by the triangular fan edge, then guided smoothly through the 3D stripe curve on the fan surface, effectively enhancing airflow. This graphics card's 3D Active Fan provides semi-passive cooling, so the fans will remain off when the GPU is in a low-load or low-power game. It allows gamers to enjoy gameplay in complete silence when the system is running light or idle. The graphics card uses a better power-phase design to allow the MOSFET to operate at lower temperature, over-temperature protection design and load balancing for each MOSFET, plus the Ultra Durable certified chokes and capacitors, to provide excellent performance and longer system life. Support for NVIDIA NVLink™ (NVIDIA SLI) technology, which combines two identical GPUs with an GeForce RTX NVLink Bridge to deliver the ultimate experience in 4K gaming or VR gaming. You can also adjust the light effect on the bridge with the AORUS Engine. The metal backplate not only provides a nice aesthetical shape, but also enhances the structure of the graphics card to provide complete protection.

Learn more about the GIGABYTE GV-N208SWF3OC-8GD

Cons: This is not like the Titan RTX or the RTX 2080 Ti, or the new RTX 30 Series. You are settling a little bit with this card (because every time you buy a computer part at a good price, there is always something that will beat it now or very soon). Sometimes I wish I spent more for the Titan or Ti, or waited for the RTX 30 series, but after this card has served it's purpose (2025+?), there will certainly be better cards to choose from.

Overall Review: If you can justify the price, this card is the way to go. You won't need a better card for quite some time.

Overall Review: No RGB is a selling point for me because I like to turn the lights down when I game and a brightly glowing computer would detract from the immersion. This card mines when I am away from the computer and in that regard I can say you get what you pay for compared to a 2080Ti. I have a Gigabyte Windforce 2080Ti that performs about 25% better than the Gigabyte Windforce 2080 Super, and 2 MSI Seahawk 2080Tis that perform about 15% better than the Windforce 2080Ti. Silent except for moving air noise to me at 75% fan speed, but my hearing is not so good in the high frequency range.

Pros: all is ok no heat

Overall Review: i install the card in my computer and no problem at all

Pros: Just installed this year, cant wait to test it out on upcoming games, trying to push it to its limits!

Overall Review: It Really is a GIGABYTE GPU

Overall Review: If you’re going to get a RTX card get one of the supers, they are cheaper then the regular and perform better.

Overall Review: The display signal to the monitor keeps cutting out, forcing me to do a hard reset of the pc. It's not an overheating issue, and it happens on games that are not demanding at all. The card itself is brand new. Overall, very poor quality control from GIGABYTE. Won't be buying their products again.

3 out of 6 people found this review helpful. Did you?
Manufacturer Response:
Dear Customer, Thank you for your comments. We apologize for your difficulty with your GIGABYTE product. Please contact us at support-newegg@gigabyteusa.com with the case number 172011 in the e-mail subject line. We will provide personalized service and analysis to help solve your issue ASAP. If the matter is urgent, please send us your contact number, and we will contact you. GIGABYTE VIP Support Team
Patrick H.
Ownership: 1 month to 1 year
Verified Owner
avoid this card5/19/2020 4:14:36 PM

Pros: Was a very fast card (when it worked)

Cons: Lasted less than 2 months before I got the space invaders all over my screen.

Overall Review: Loved it for a month. Then it died.

2 out of 4 people found this review helpful. Did you?
Manufacturer Response:
Dear Customer, Thank you for your comments. We apologize for your difficulty with your GIGABYTE product. Please contact GIGABYTE RMA department for further assistance about graphic card warranty service by phone at 1-626-854-9338 opt. 4 Monday through Friday from 08:30 ~ 17:30 PST. GIGABYTE VIP Support Team
Brian r.
Ownership: 1 week to 1 month
Verified Owner
Great6/15/2020 9:41:52 AM

Overall Review: It's a good card no prob