OUT OF STOCK
Sold by: Newegg
Shipped by Newegg
This item is currently out of stock and it may or may not be restocked.
Out of Stock
Add To ListFound on 273 wish lists 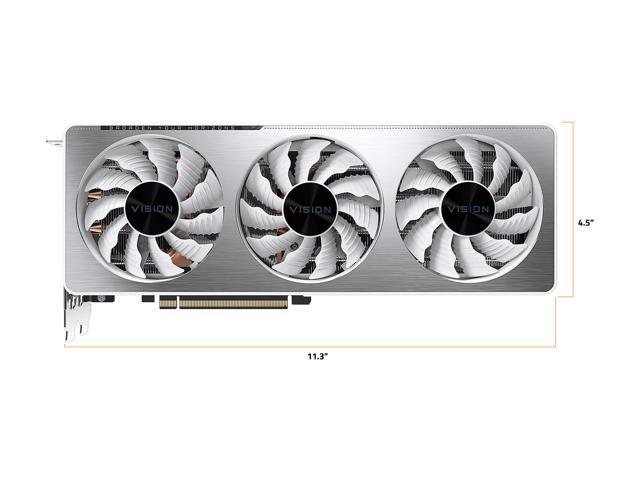 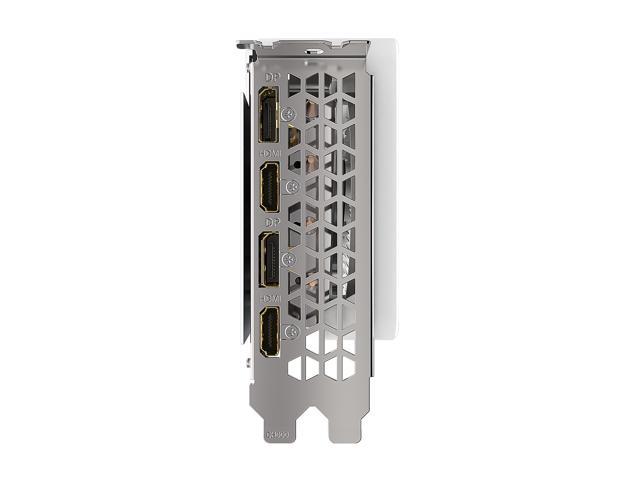 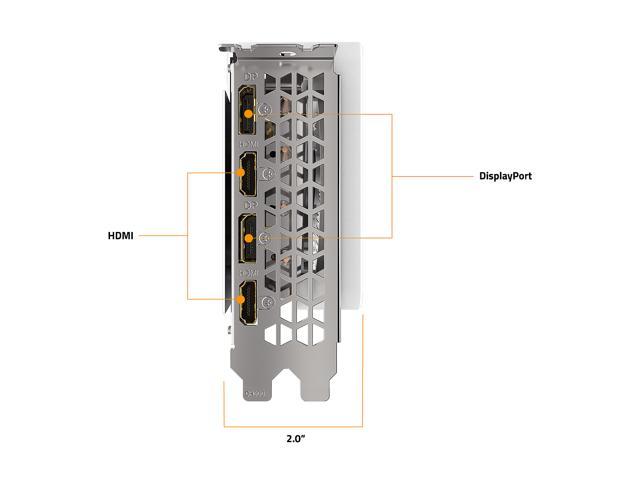 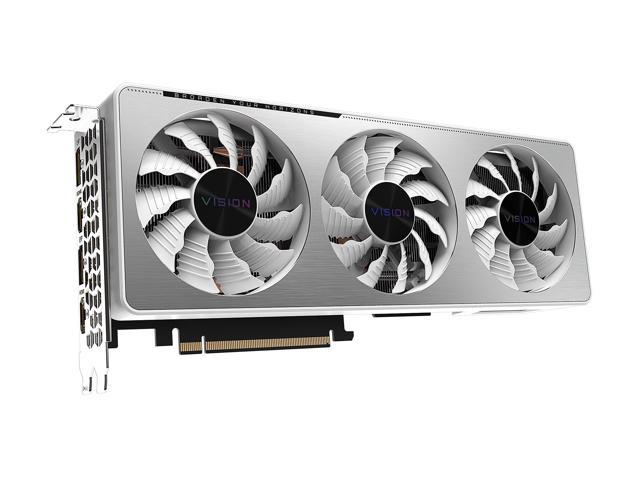 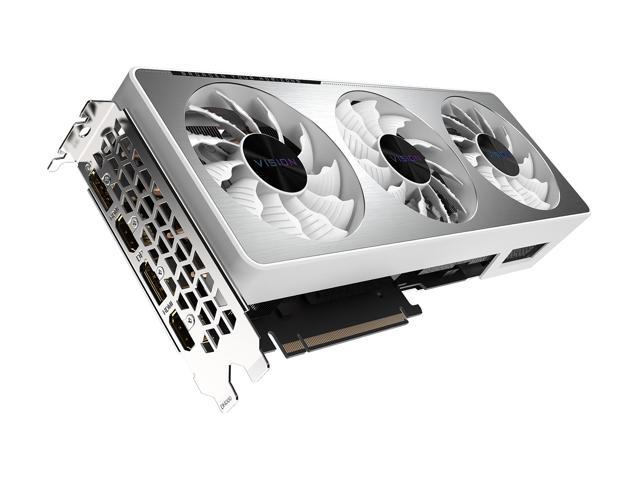 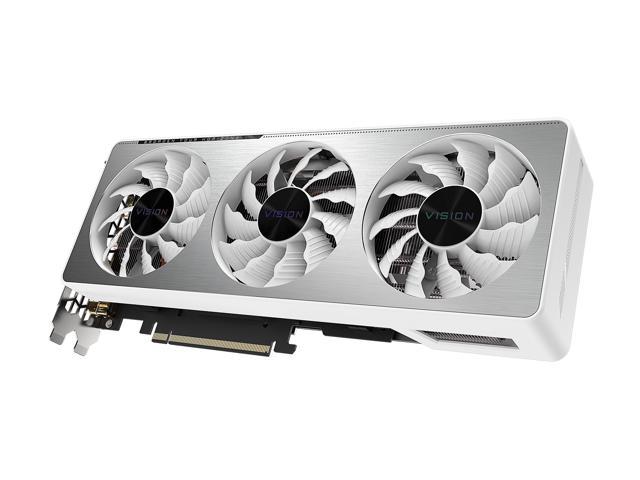 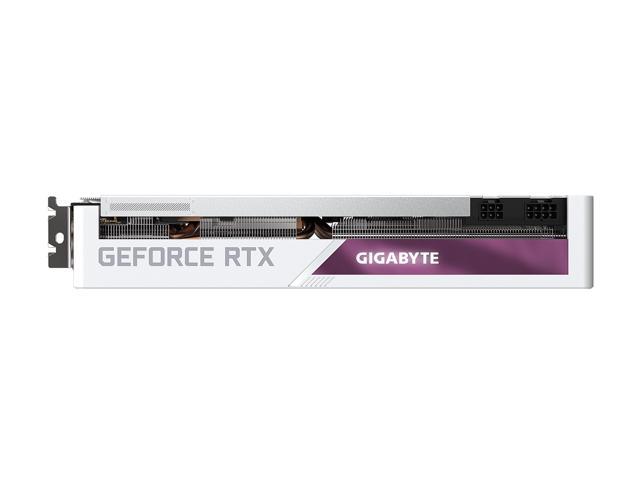 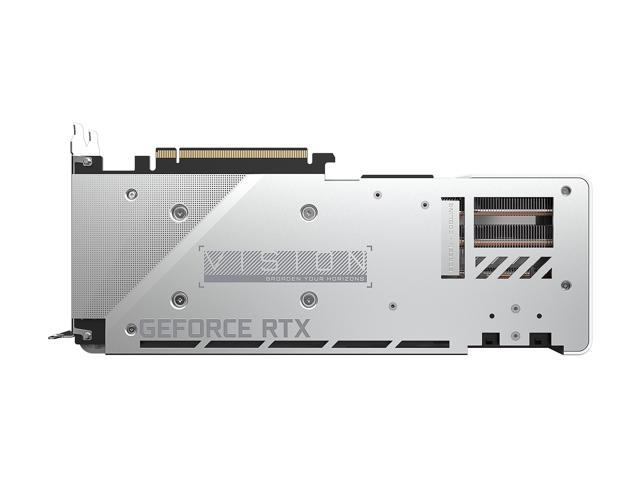 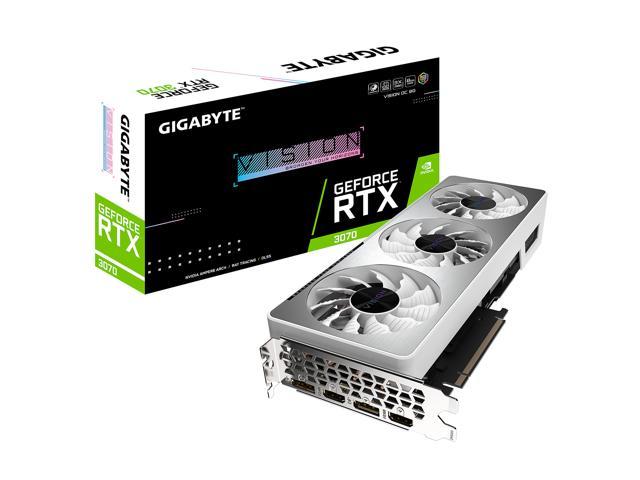 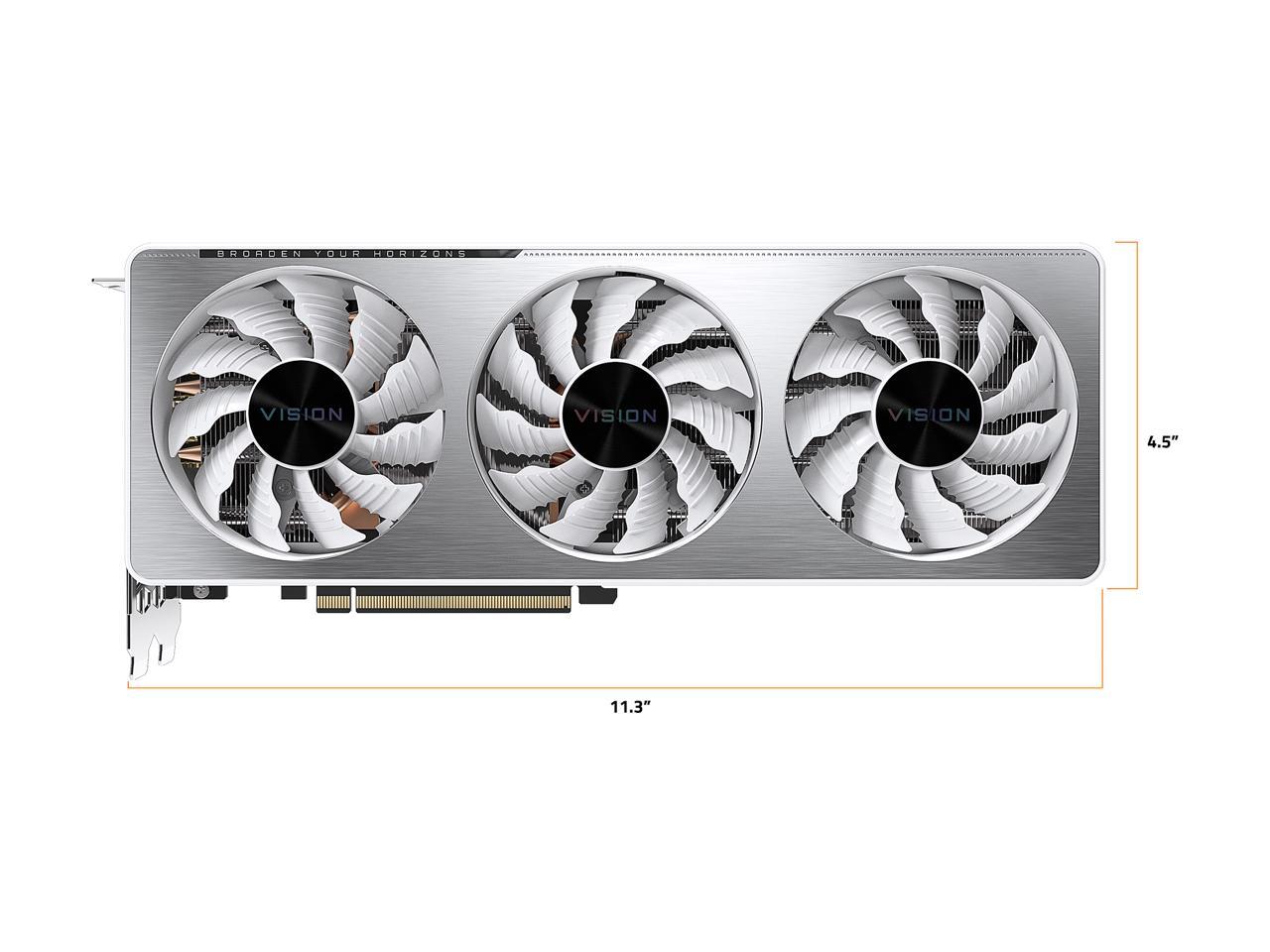 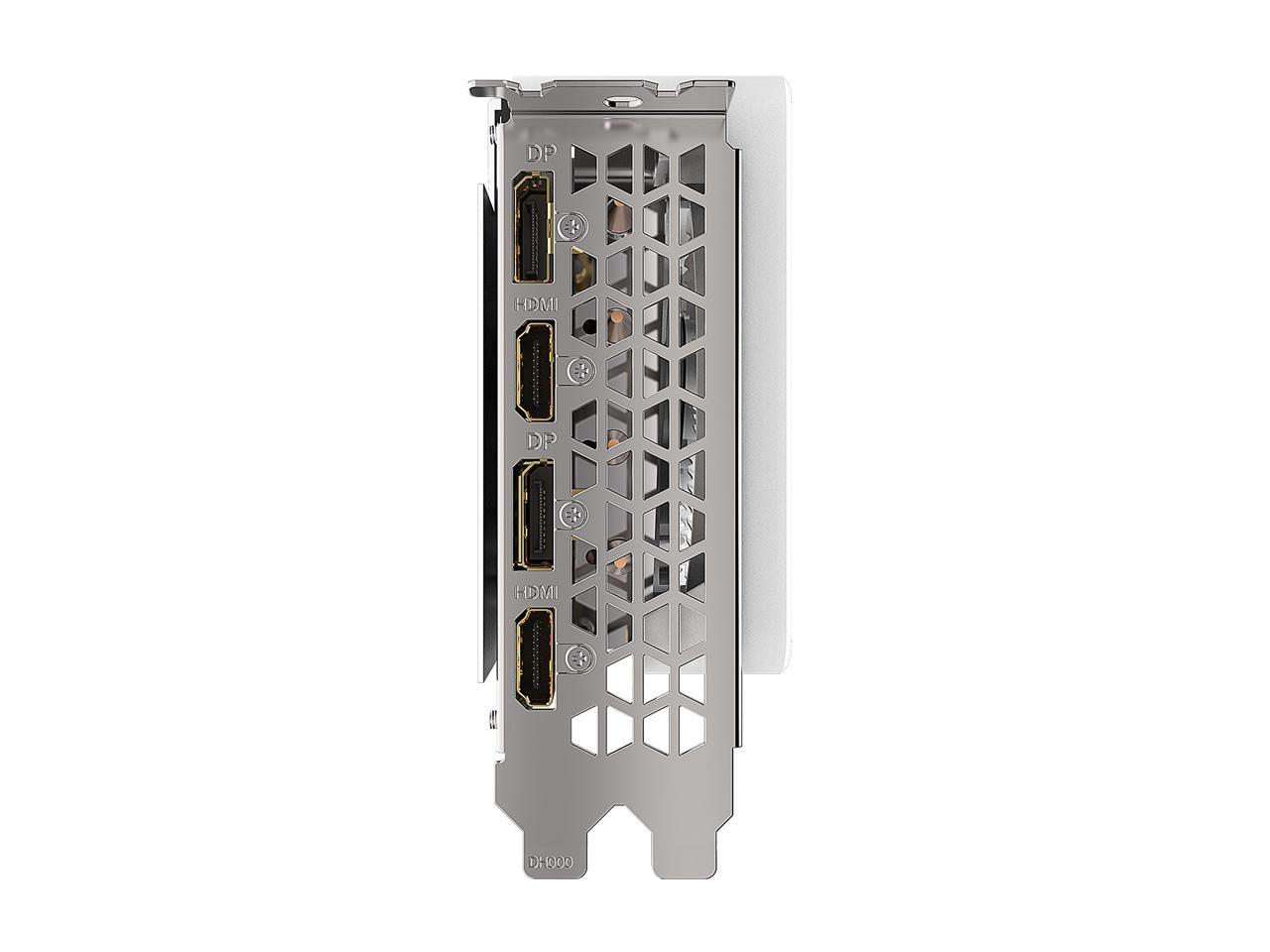 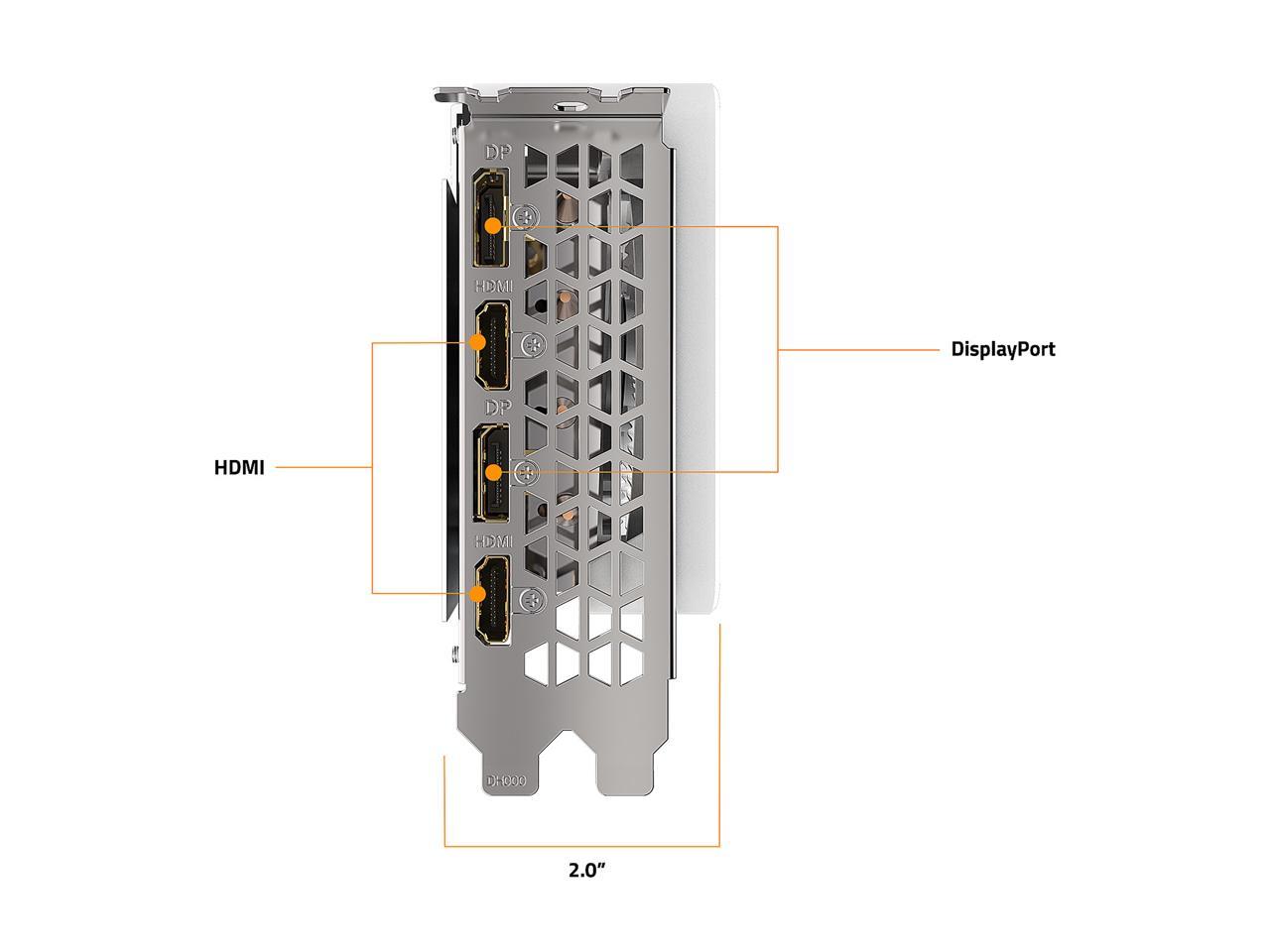 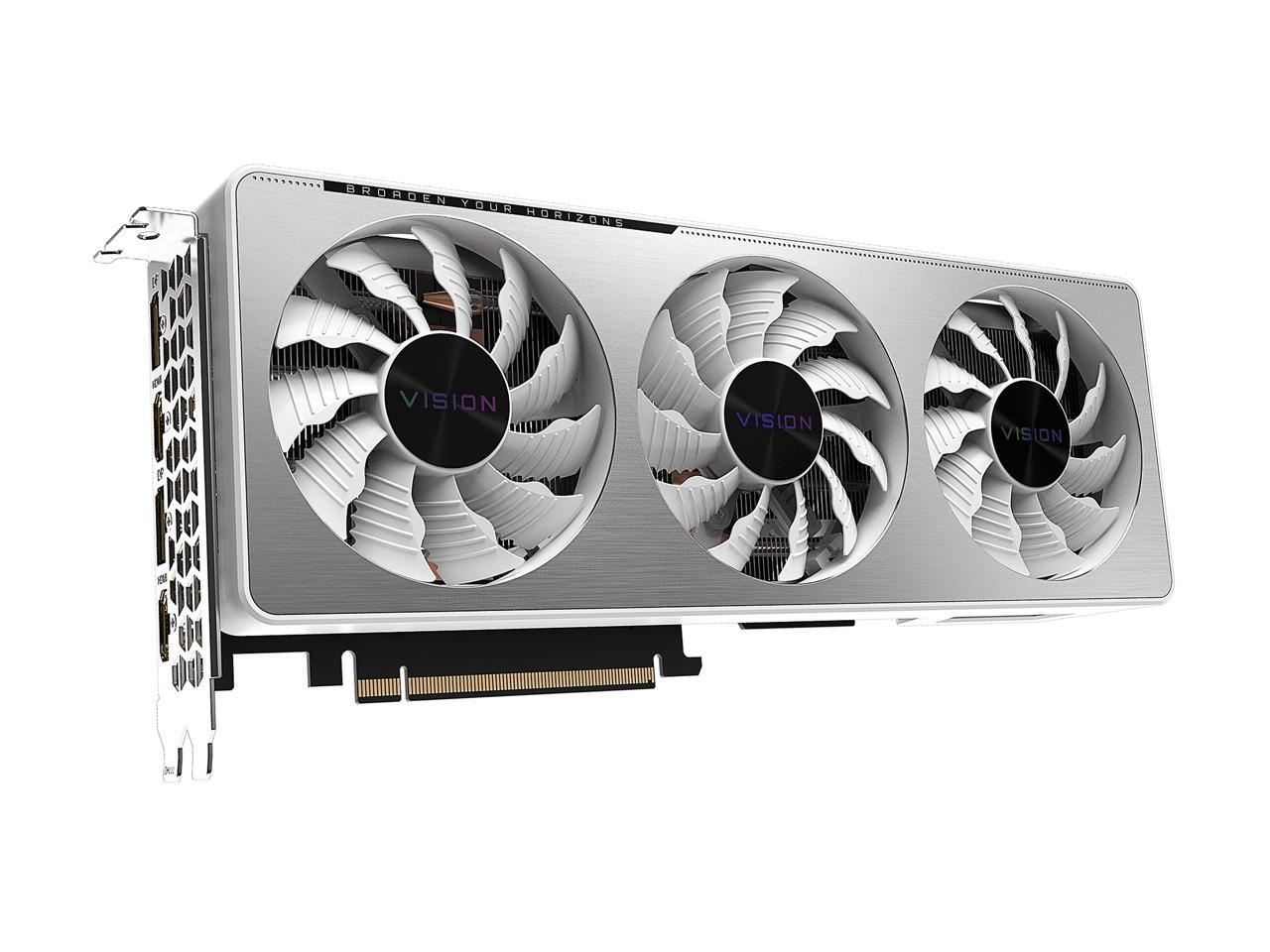 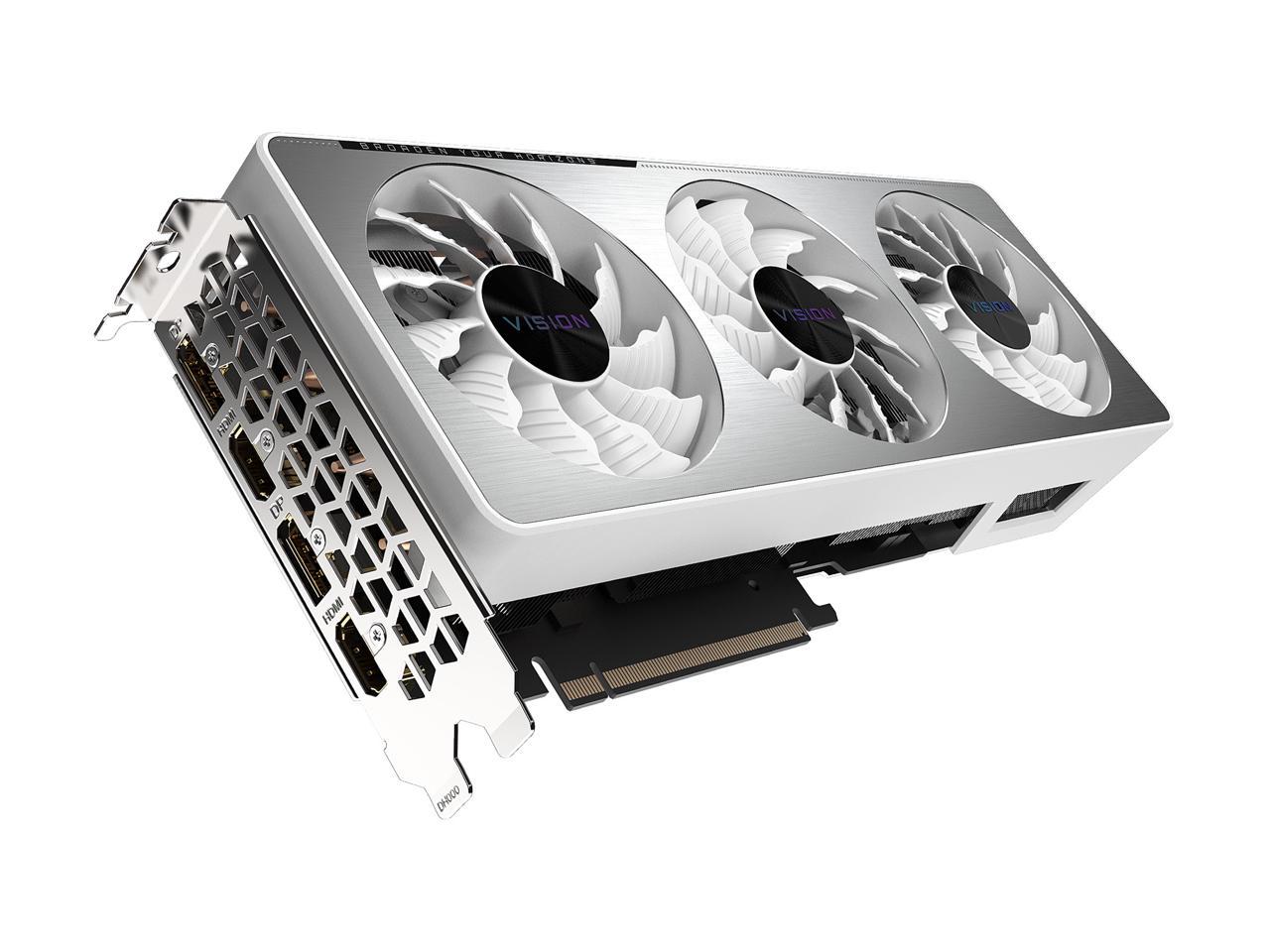 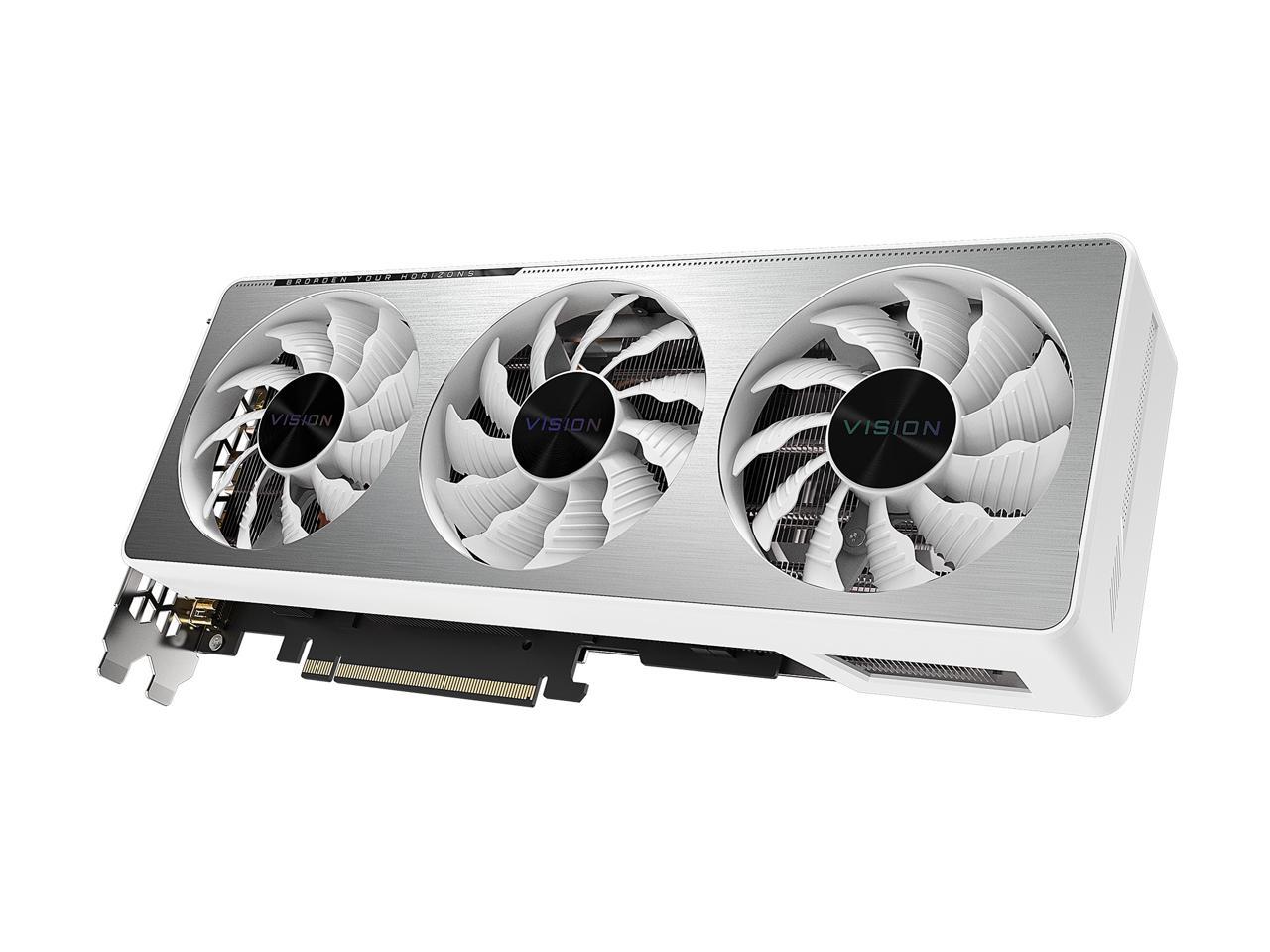 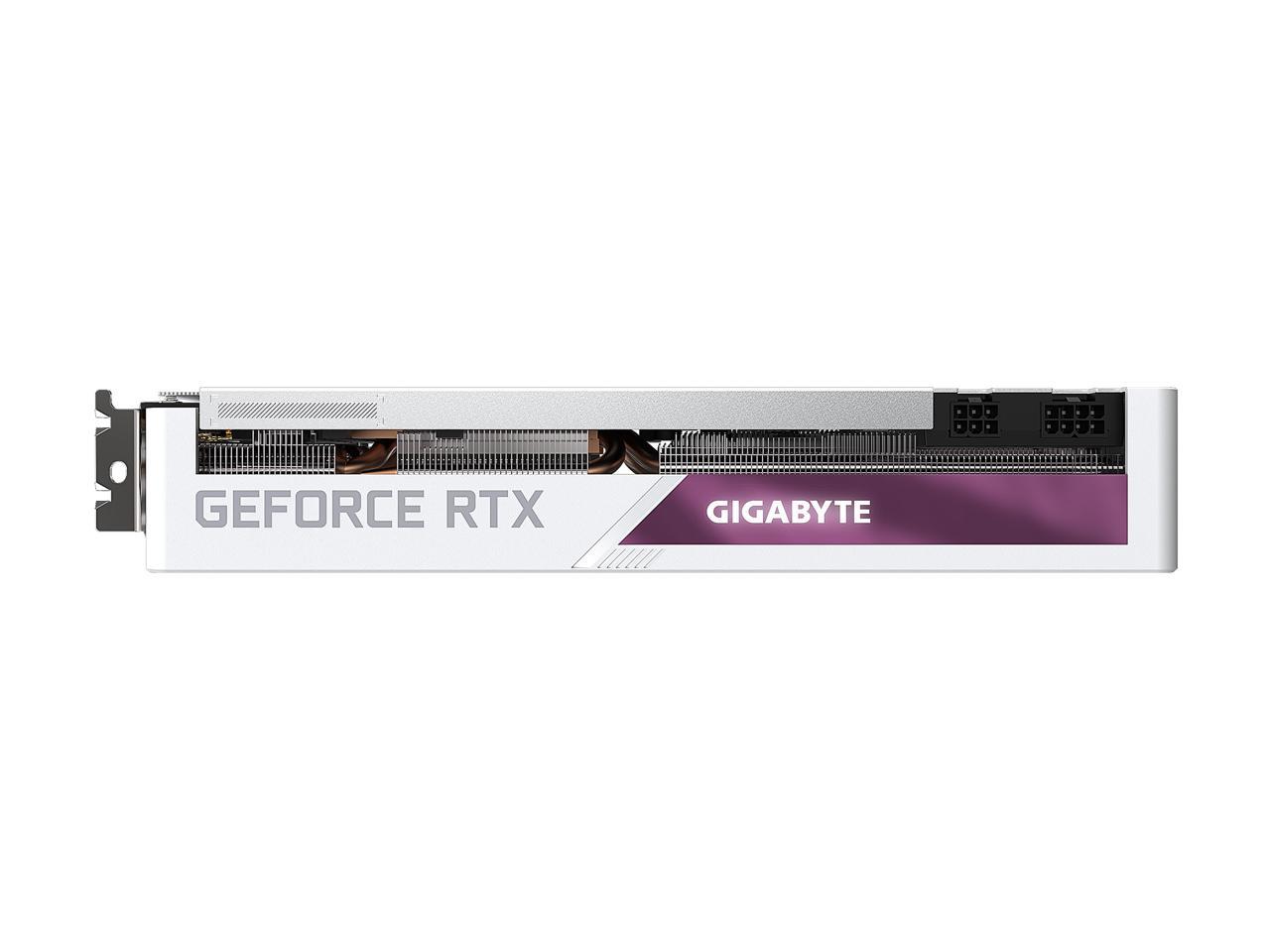 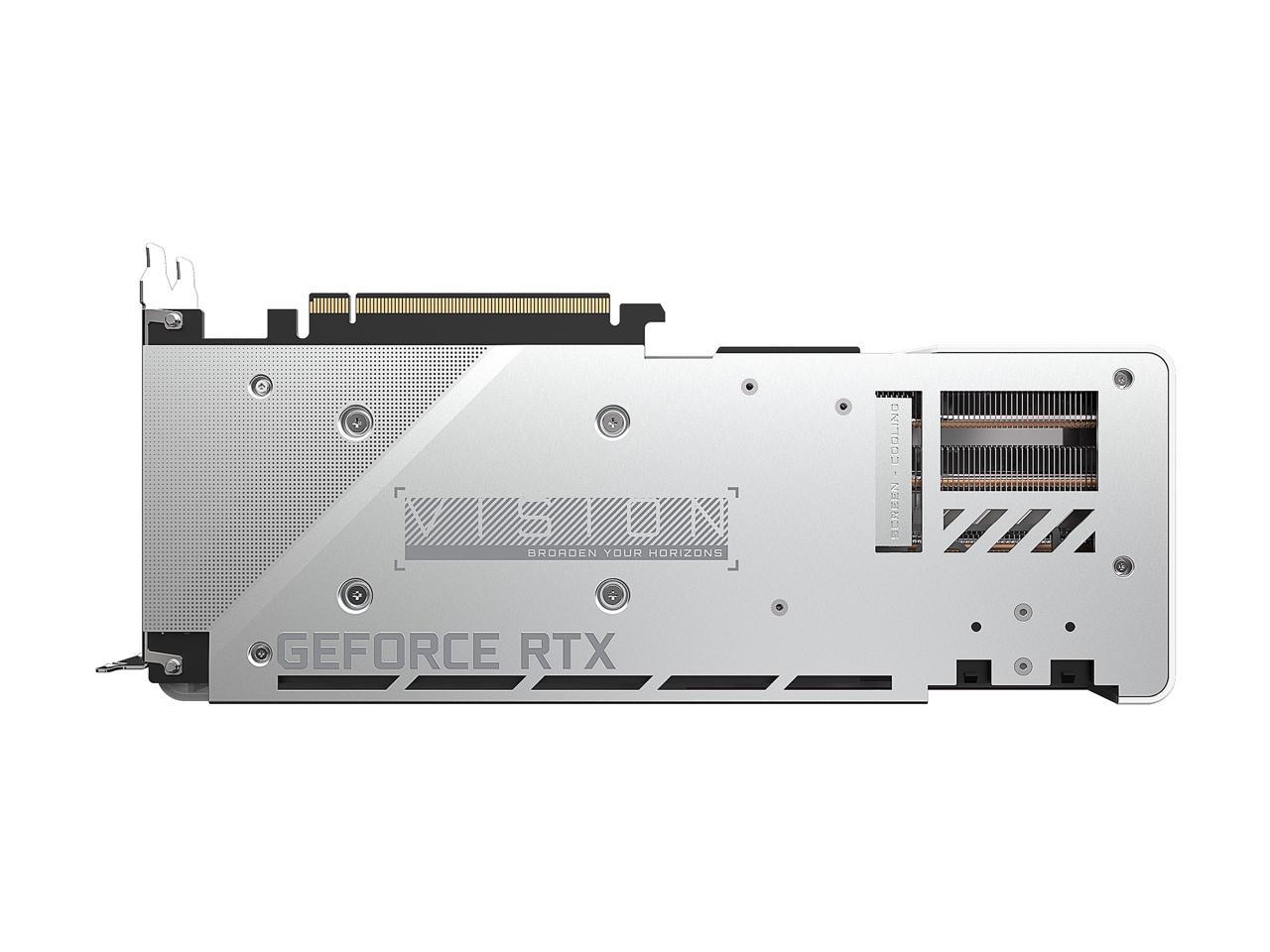 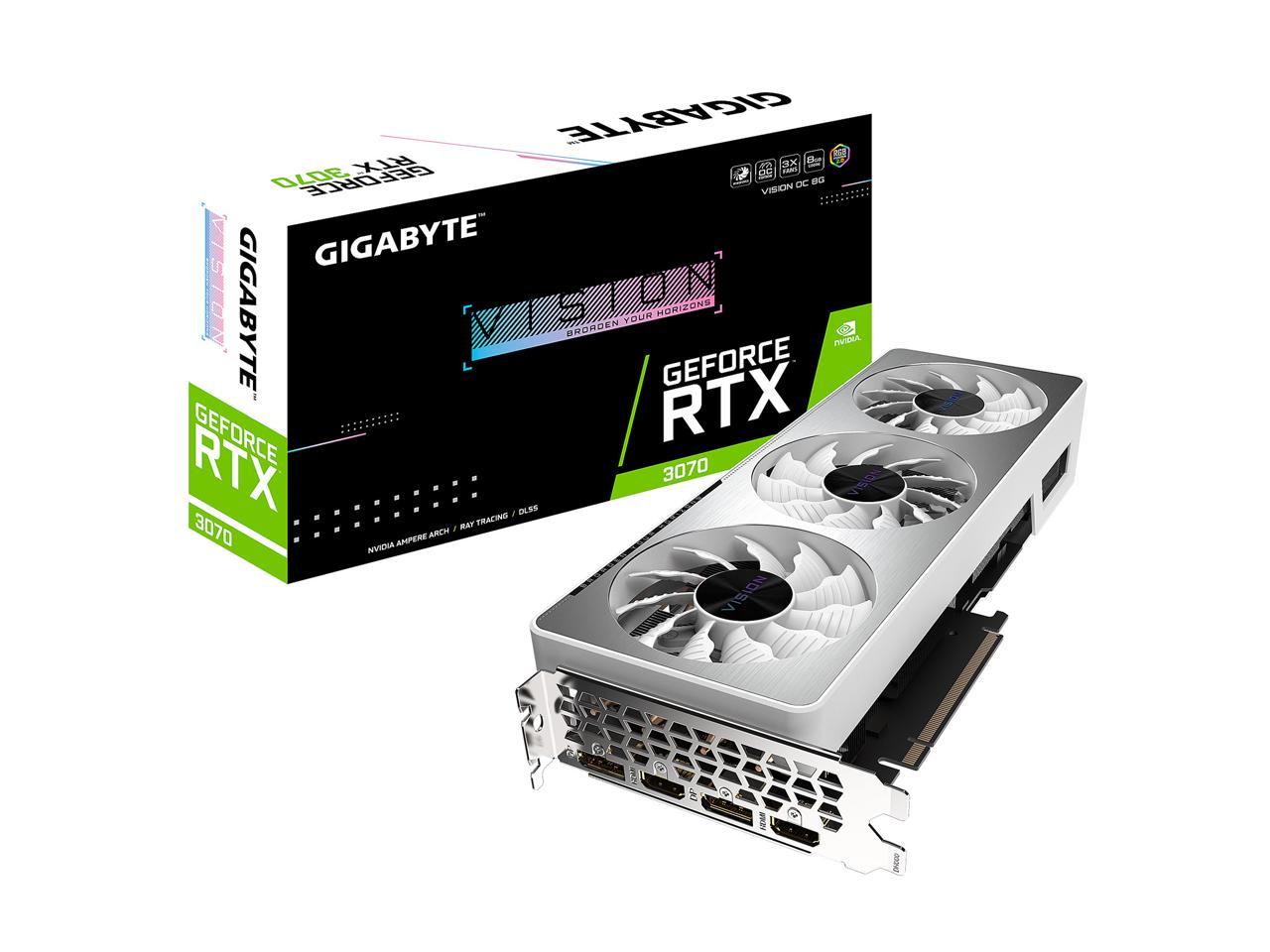 CREATE YOUR WORK FASTER THAN EVER

Powerful GeForce RTX 30 VISION series accelerates your work with incredible boosts in performance. Whether you are doing VIDEO EDITING?3D ANIMATION?PHOTOGRAPHY?GRAPHIC DESIGN?ARCHITECTURAL VISUALIZATION or BROADCASTING, it can save you a lot of time.

Pros: Runs CoD:Warzone on my ultrawide 3440x1440 full settings with raytracing enabled at about 110FPS. Works great with FreeSync Premium, nice and smooth. Seems a bit quieter than my previous 2060S.

Cons: The PCI-e power connectors are sketchy and I had a LOT of trouble getting them seated. I tried two different PSUs - both of which went right in on my old 2060S and both had problems on both new GPU connectors, so it's definitely a problem with this card. It seems like they have a male expanding pin design that likes to "catch" the edge of the female pin on the PSU connector and prevent it from going in. I ended up taking a small pin tool (look up "mini pin and hook set" on harbor freight) and *very* slightly "reaming"/expanding the female pins on the PSU connector, then tried "squishing" the GPU pins so they weren't so large right at the tip, and finally made sure they were straight (some bent slightly at my first tries to get it installed). Once that was done, I gently wiggled the plug until I felt it get past the troublesome pins and it finally seated! First time I've ever had issues like this and I hope Gigabyte never uses these pins in the future. Looking on Reddit, I'm not the only one that had issues with these connectors.

Overall Review: Now that the install is complete, I'm happy with the card. I was using an older DP cable that apparently wasn't up to spec and caused some horizontal tearing. Once I replaced it with the cable that came with my new monitor all the tearing went away. No fault of the card, but figured I'd mention it.

Cons: - Not the best overclocker but has great performance nonetheless.

Overall Review: This was my first choice and I'm lucky I was able to get one. Great product overall.

Pros: All the frames you could want...within reason.

Overall Review: A stupendous jump from my old 1080.

Cons: Loose PCIE connectors, but mine seemed to be pretty fine. RGB logo doesn’t seem to light up evenly unfortunately.

Overall Review: Pretty satisfied with it except for a few nitpicks.

Cons: The led lights are on but the gpu does not display anything. At one point i saw a display but it was completely torn up, as in screen tearing. i could barely make out the image which was my motherboard brand. Then it wouldn't even work after that.

Overall Review: Overall review is 1 egg, zero eggs if i could. I would be willing to give it five stars if it worked but it doesn't

Manufacturer Response:
Dear Customer, Thank you for your comments. We apologize for your difficulty with your GIGABYTE product. Please contact us at support-newegg@gigabyteusa.com with case number 180567 in the e-mail subject line. We will provide personalized service and analysis to help solve your issue ASAP. If the matter is urgent, please send us your contact number, and we will contact you. GIGABYTE VIP Support Team
Anonymous
Ownership: 1 day to 1 week
Verified Owner
DOA1/29/2021 7:08:17 PM

Pros: I was excited to open the box

Cons: The card's fans and light came on, however the display port had no output and my hdmi monitor flickered violently and was completely covered by vertical orange lines. Hopefully the RMA is quick because I was so excited to put this graphics card to work over the weekend after spending countless hours refreshing newegg to find one in stock.

Overall Review: You've got to take what you can get with the rtx 30xx. It is however for the future a bit concerning how many DOAs are reported for this card. If I had a choice at all then I would purchase a different card. The quality control seems to be slacking here to meet the deman.

Pros: -Beautiful -Powerful -Is silent I just love it

Cons: I would say the RGB program for the letters “gigabyte” doesn’t work for me for changing the colors.

Overall Review: Most buy is beautiful and powerful