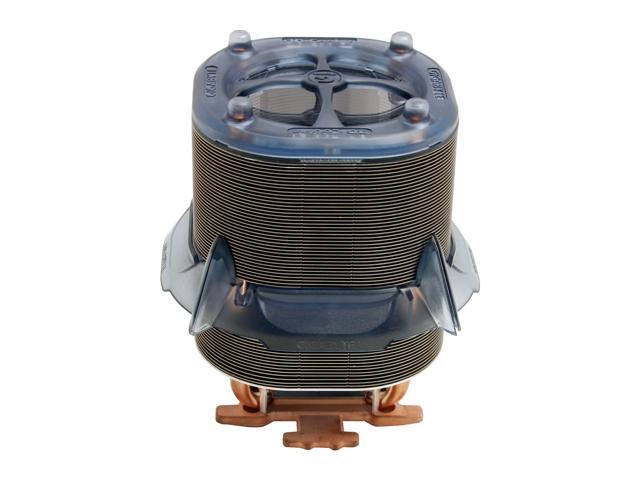 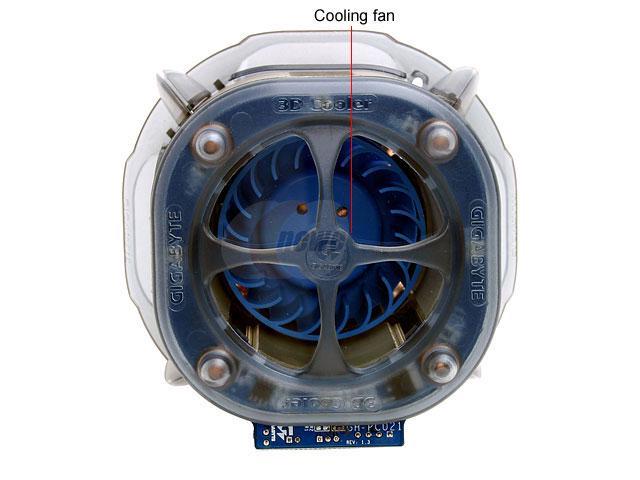 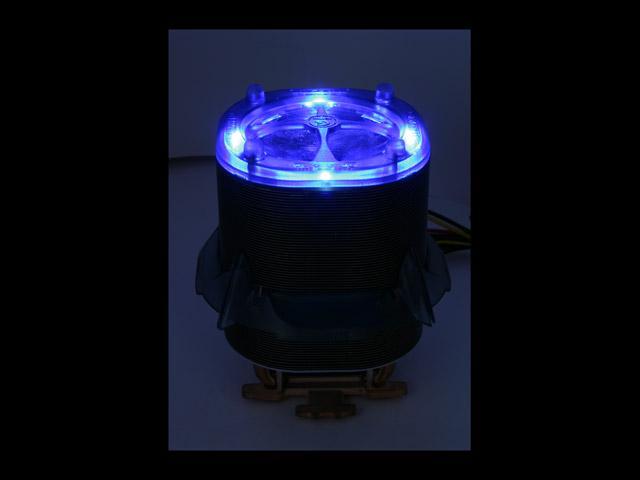 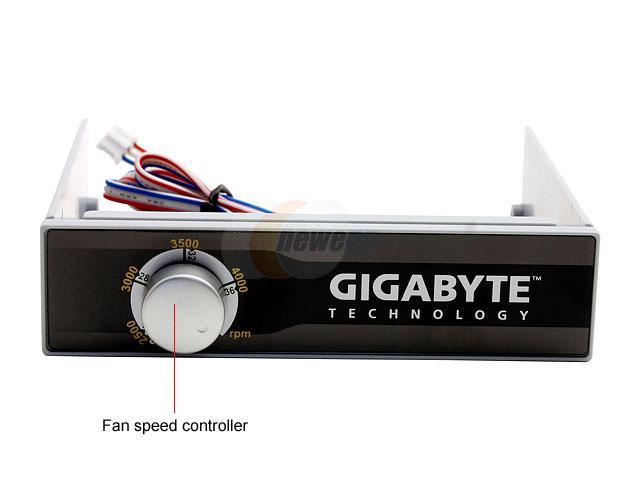 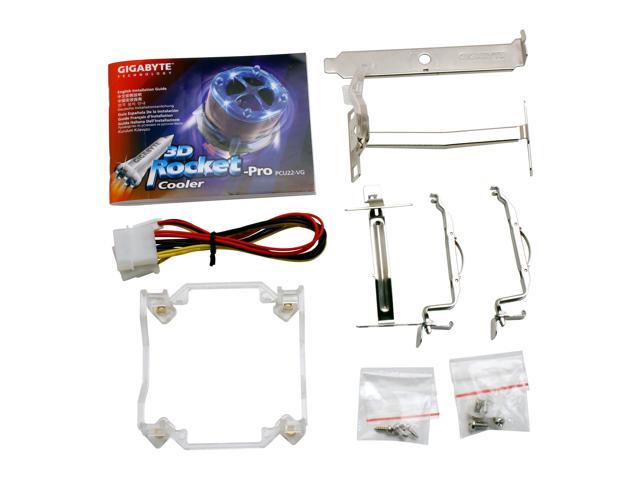 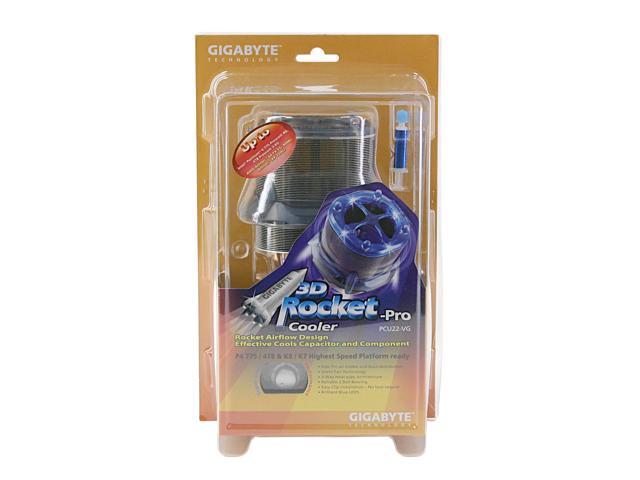 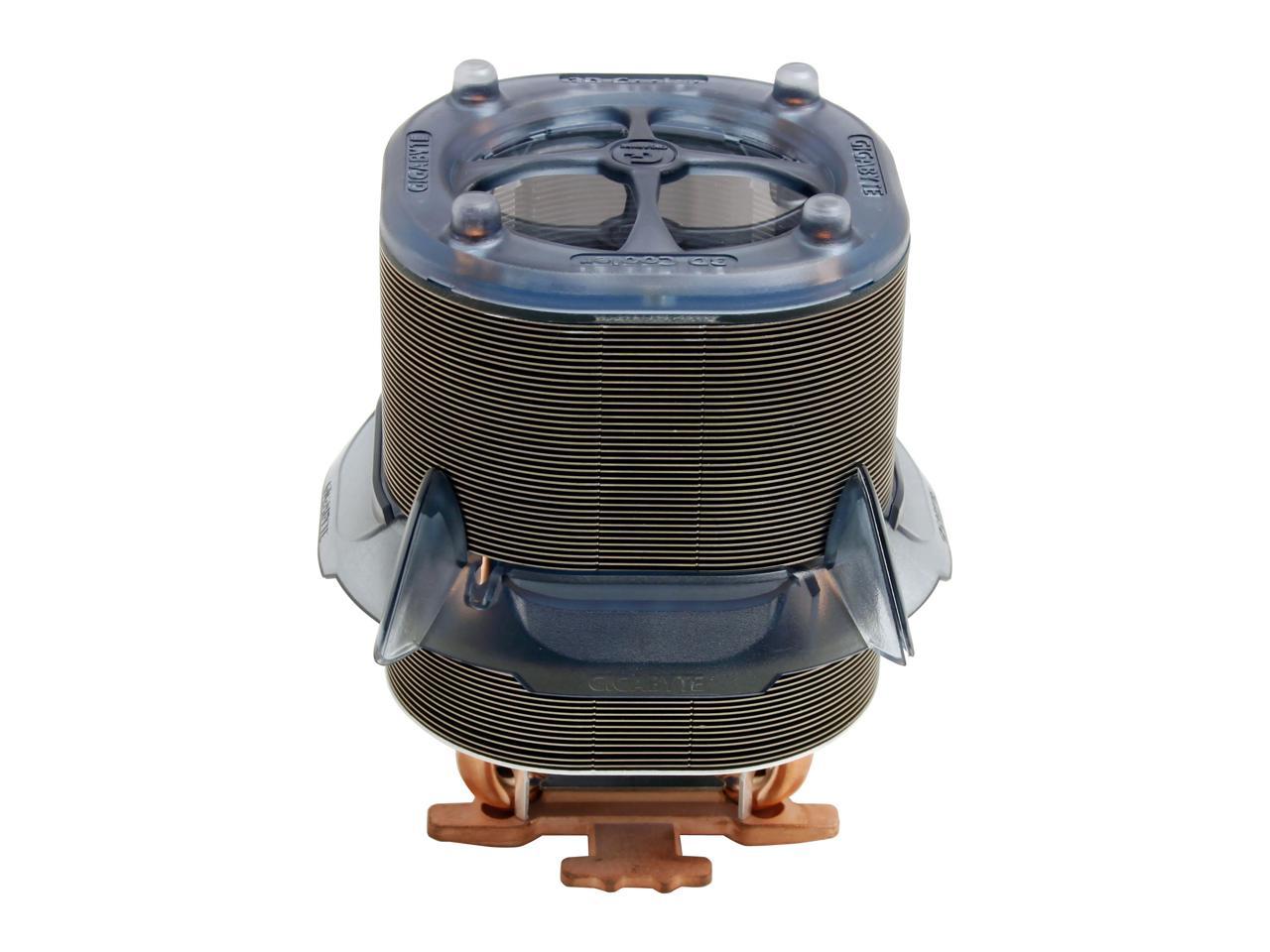 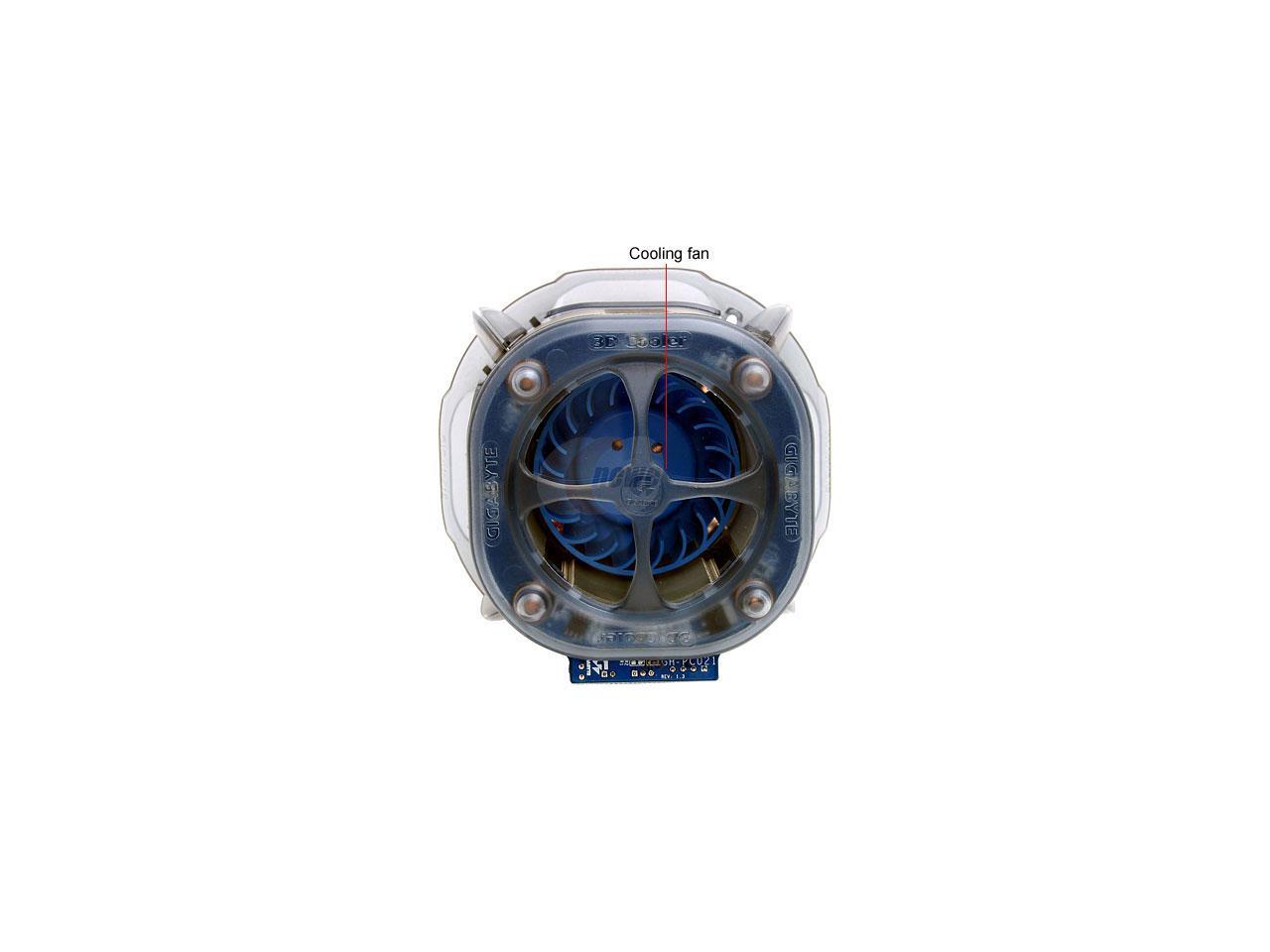 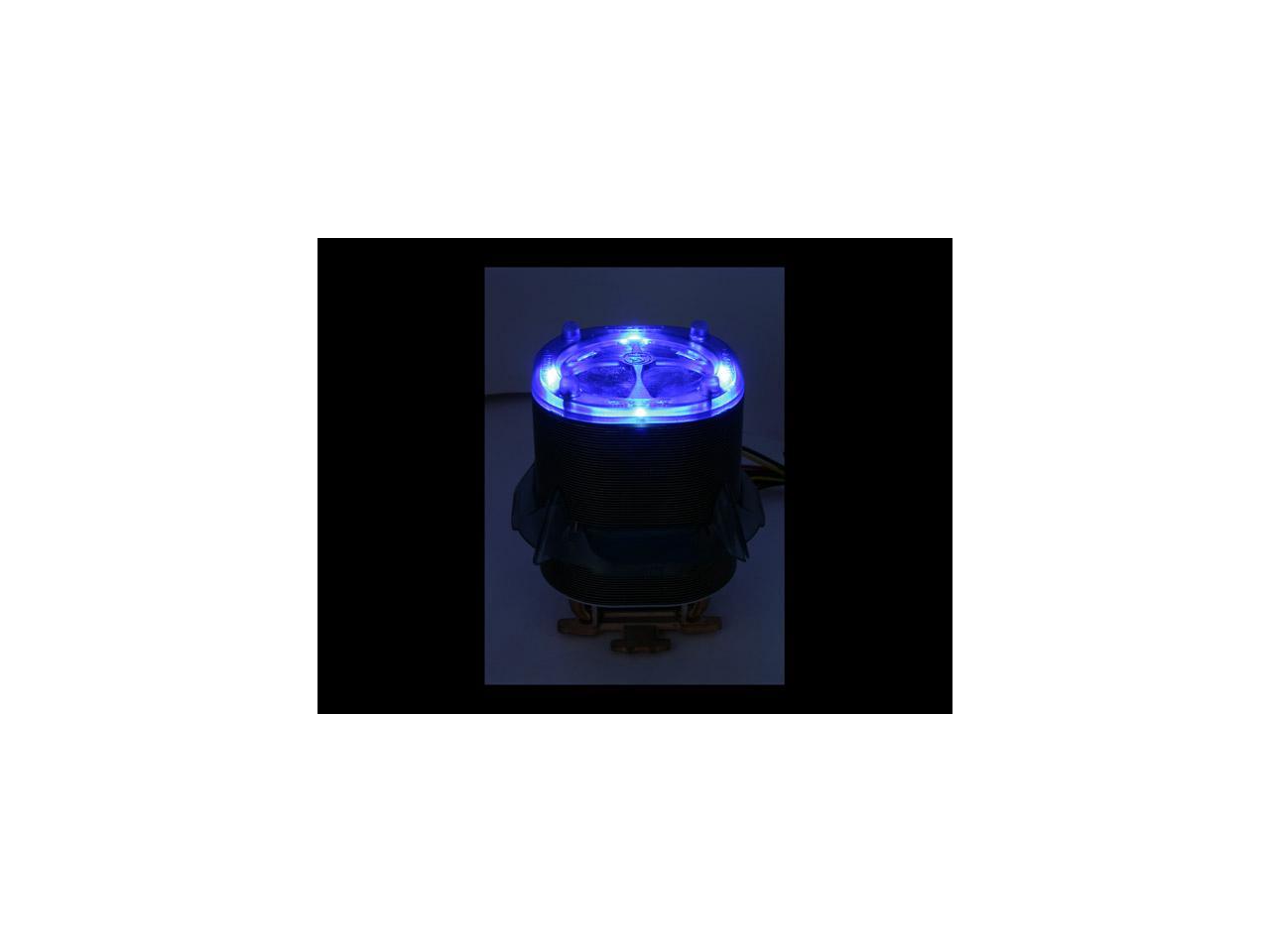 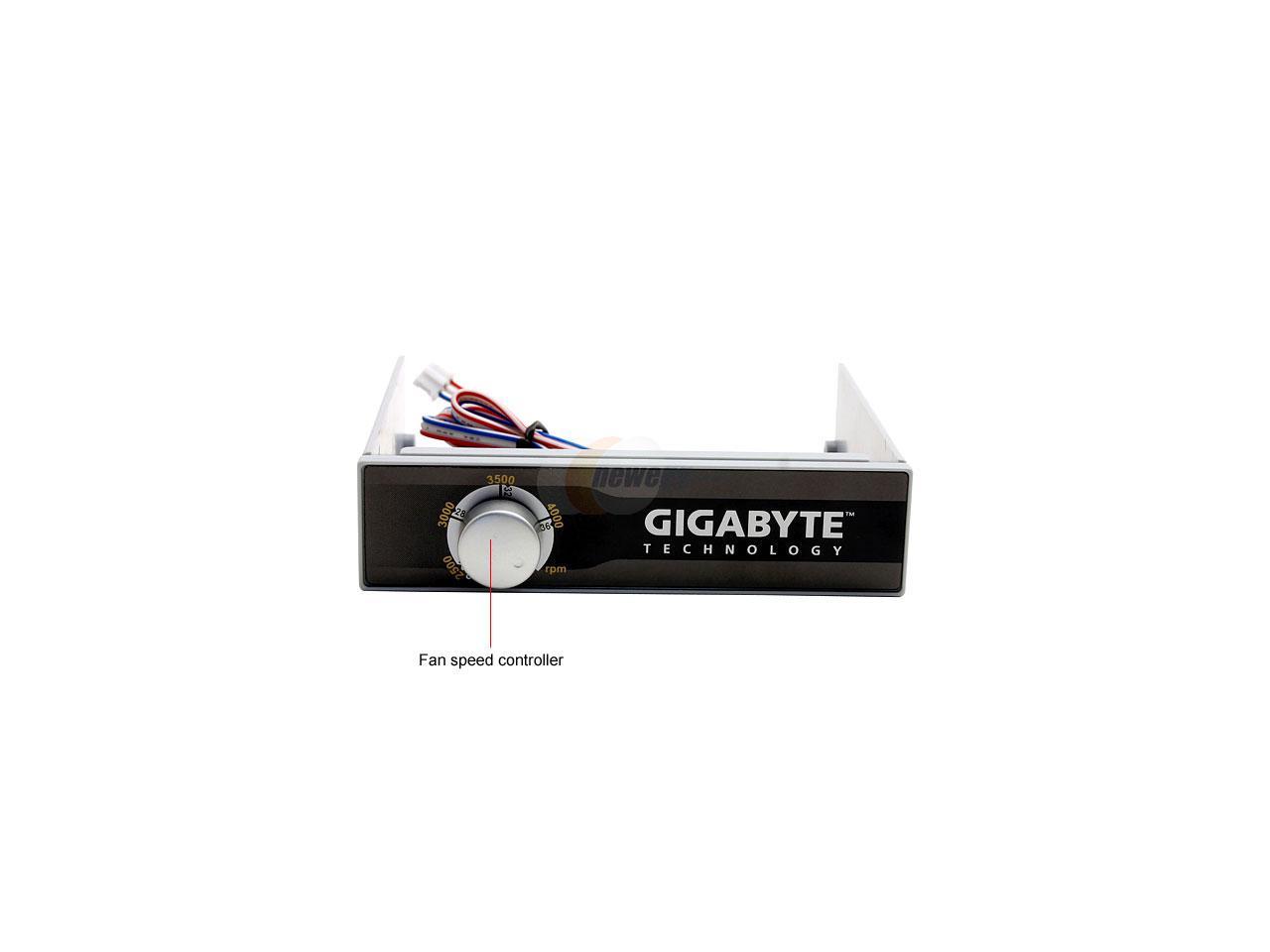 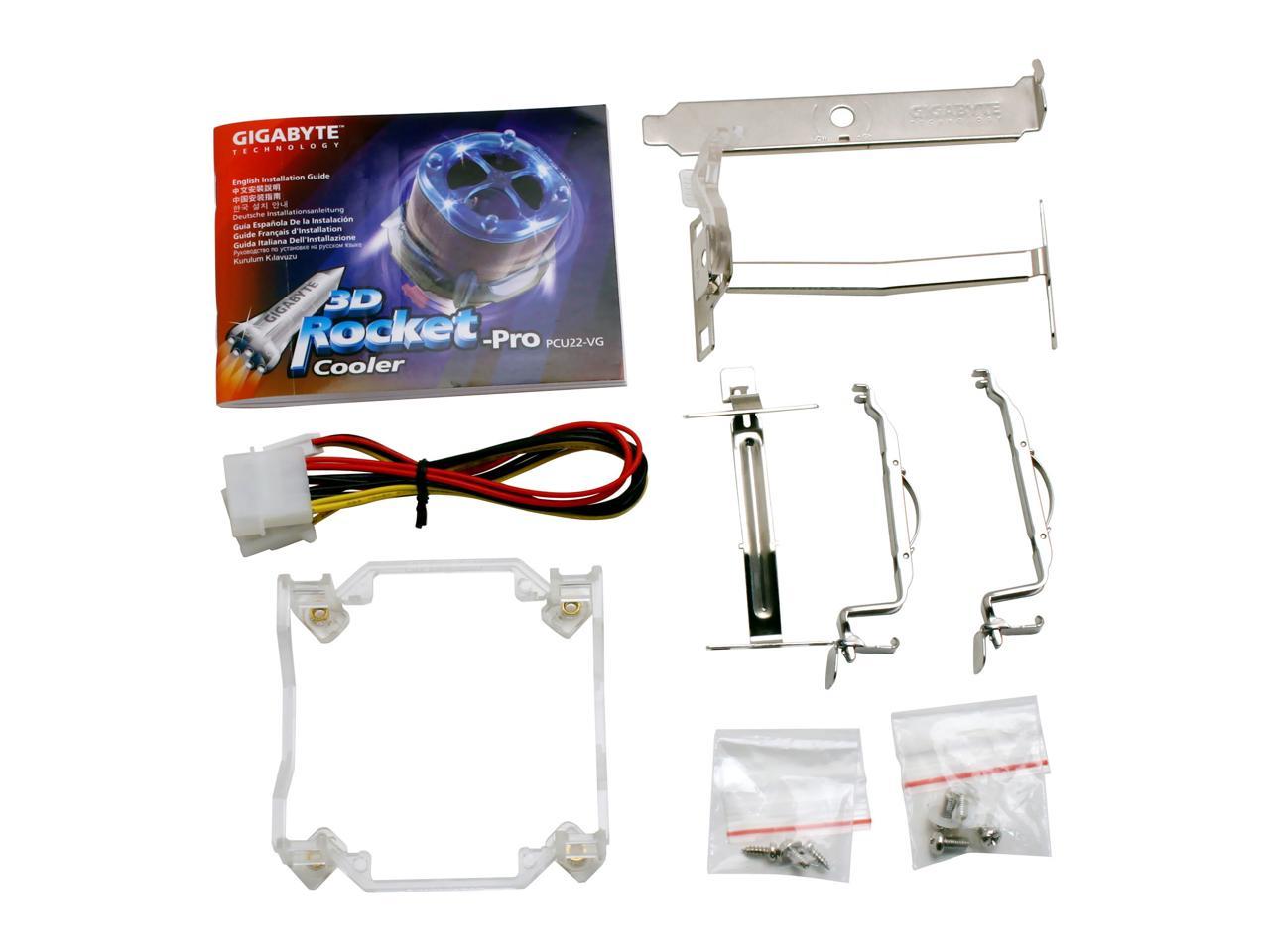 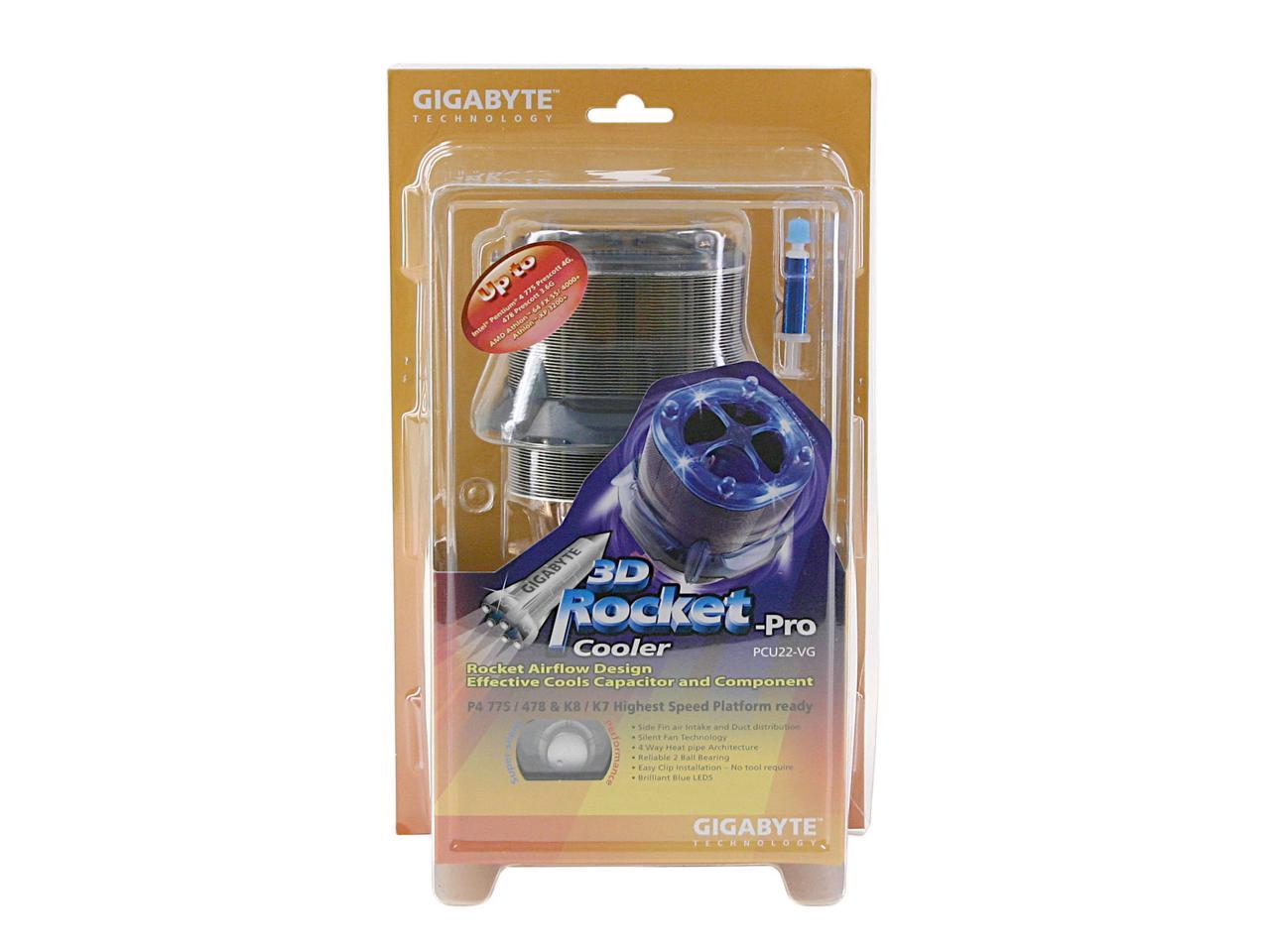 (98) Write a Review
OUT OF STOCK.
Overview
Specs
Reviews
For those that want their processor to run as cool as it looks there is the Gigabyte 3D Rocket. Compatible with Pentium 4 LGA775/478 and AMD K8 platform processors, the 3D Rocket's side-fin intake fan duct design channels airflow to cool both the CPU and the motherboard at the same time, giving you more cool for your cash.
A series of four copper pipes draws heat up away from the base and disperses it throughout the high-density cylindrical fin assembly, reducing the amount of heat headed to any one area of the cooler. A turbine-like fan spins in the core of the fins blowing heated air away from your components, while a shield redirects cooler air coming from the fan's sides to the components around the CPU. An intelligent fan speed control module lets you run the fan from 2,500rpm up to a high-performance 4,000rpm for when your processor is under heavy load.
Brilliant blue LEDs add a splash of color to your case interior. All the necessary clips and bolts are included for attaching the unit to your motherboard. No tools are needed to install it, either. WIth ease of installation, control and operation, this is as cool as it gets.

Learn more about the GIGABYTE GH-PCU22-VG

Overall Review: This is the 4th heatsync I've owned. The first sucked in cooling (CPU temp at 130F idle) the second one broke after 2 months (fan blade broke but 94F idle) the 3rd one broke again after 2 months (kept clicking, fan blades hit fan case but 96F idle) now this being my 4th I am very impressed by it. It keeps my Celeron D 340 (2.93Ghz, Socket 478) at 85F idle. (I havent got it to go above 105F yet). If you need a Heatsync, This is the one! BTW, this one has copper heatpipes, the Rocket II has Aluminum Heatpipes which makes this one better.

Pros: Looks great, copper heatpipes, blue LEDs, big fan, moves a lot of air, and blows on the MB, too. Includes speed controller, I put mine in the expansion slot bracket, had to clip a standoff on the potentiometer with flush-cutters. Cools an OC'ed x2 4000+ just fine.

Cons: Noticeable when run full-bore. Heavy? Really, really large if you are not used to the size of modern non-stock coolers. almost 4 1/2 inches tall. About the diameter of a very large coffee mug, almost 4 inches.

Overall Review: This thing is great, and I couldn't get everything I wanted for the $20 mark, had to spend more and glad I did.

Cons: LGA775 bracket is slightly difficult to install, manual pictures are useless (too small) had to look at outside box examples to get it right, no bios speed control

Overall Review: This fan actually dropped my CPU temp 5 degrees C with arctic silver 5, and with a pci fan it dropped my sys temp by almost 10

Pros: Using this with arctic silver on an e6600 set to 3.34ghz and the idle temp stays at around 28-29C on both cores. That is crazy! Easy to install once you figure it out(see cons) and just an awesome value.

Cons: The instructions are the biggest con. They never mentioned that the P4 brackets were needed, i had to figure it out myself. Pics are simply worthless. Heatsink is pretty big so you want to make sure you have good room so you can mess with other components in your case.

Overall Review: I still have to get the temps at full load but im sure they would be at a very comfortable range. I couldnt be happier with the performance so far, they exceeded what i expected from this.

Pros: This is an amazing fan: keeps my new AMD Brisbane 3600+ NOTTIN' OVER 30C with Artic Silver 5... First I even forgot to plug the molex power cord and runned my computer for 8 minutes only on the heat sink, and it still never reached 40C, this is a proof of amazing heat dissipation. The heatsink shape and leds looks nice if you have side window, come with speed controller, the 3D cooling system really works it's very light for what it looks like... You'll need nothing more... I see the difference in temps with my old fried out P4 Prescott, hope I could try the fan on it. Really easy to mount on AM2 socket.

Cons: I find it louder than my other fans, contrary to some other reviews... Noise level is reasonable only when fan is set at lowest speed. I also can't figure out how to take the knob out of the 3.5" bay to put it on the PCI blade... instructions for this lacks some. However I'll do some research, these cons aren't big ones and I still give newegg and this fan 5 eggs.

Overall Review: I don't get why the instructions says not to remove the transparent plastic film on top of the heatsink. If tou have a side panel case fan or simply a side air duct, you take off the plastic film and be sure to get 5 degrees Celcius less. Applying thermal compound is important in CPU cooling: be sure to apply your thermal conpound according to its manufacturer's instructions or you may judge wrongly the potential of this amazing CPU cooler.

Pros: I have e6400 on gigabyte motherboard ds3 had issues with core heat. put this baby in with artic silver 5 now idle is 20C and run with game 35C

Overall Review: I love th fact you can adjust the speed through controller which is in my 3.5 floppy port

Pros: "Side fin" fan design is effective and doesn't accumulate as much dust. I was pleasantly surprised to see my FX-55 running at 40C under load. I've had this cooler for almost two years and it continues to run as great as the day I got it.

Overall Review: I use this cooler with Arctic Silver 5.

Pros: Killer design, works beautifully, and cooled my CPU temp down 12 degrees from really loud thermaltake I was using.