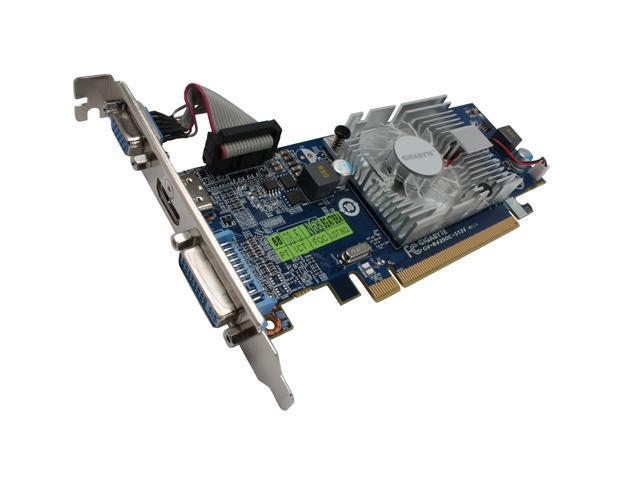 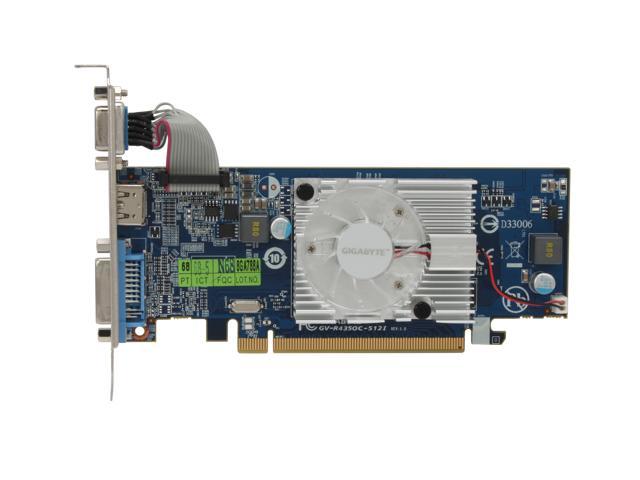 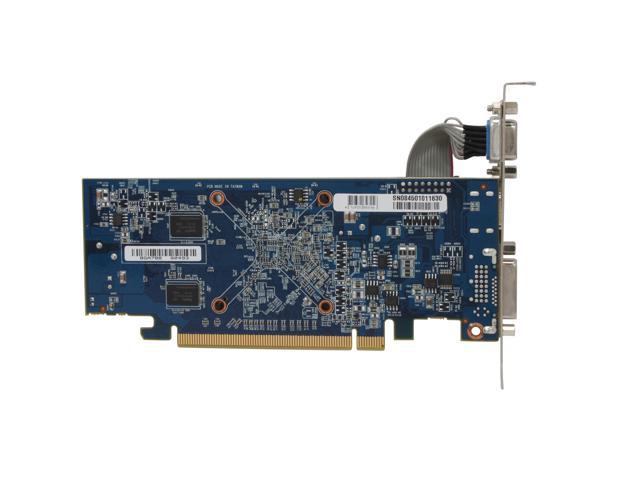 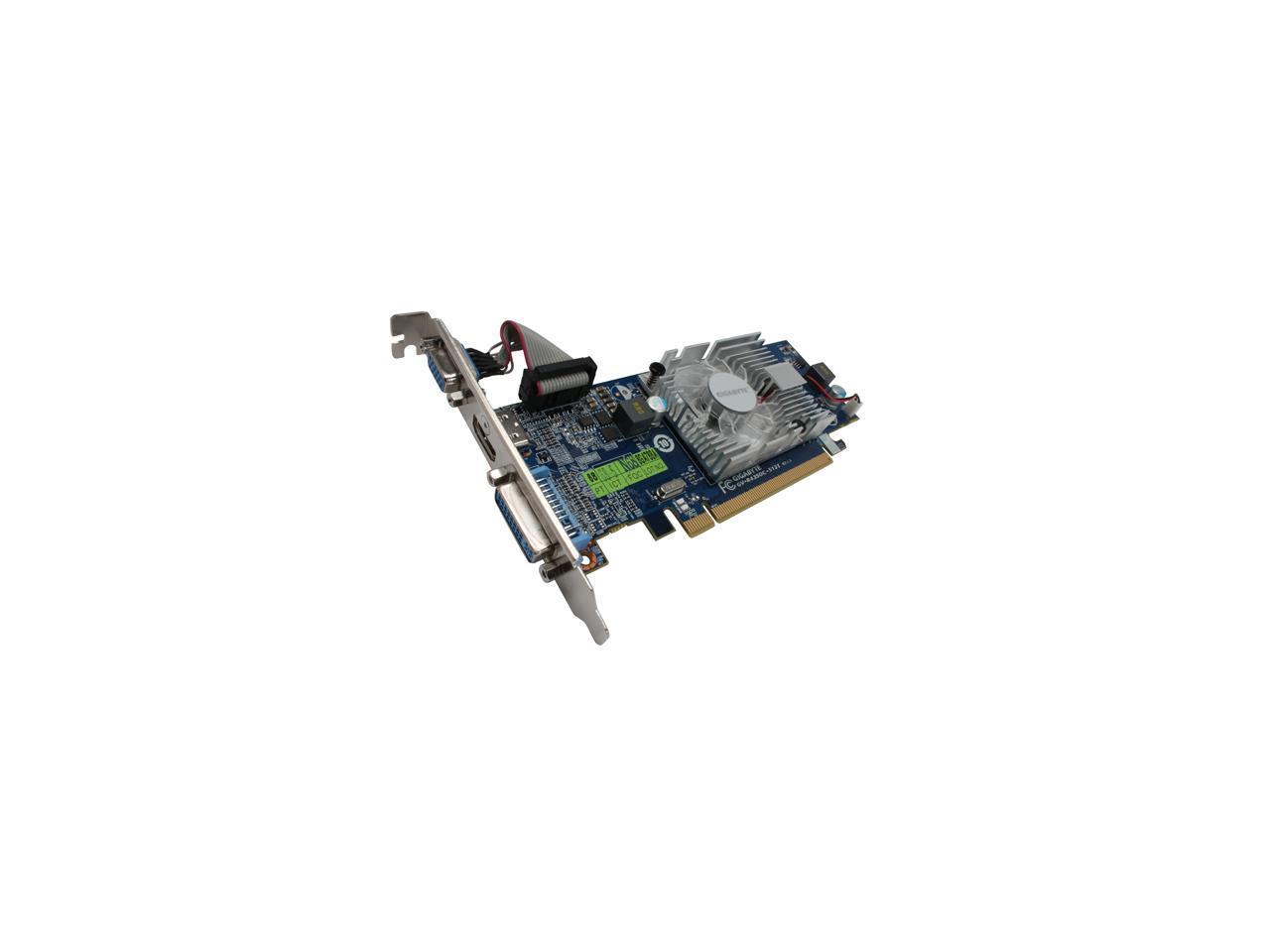 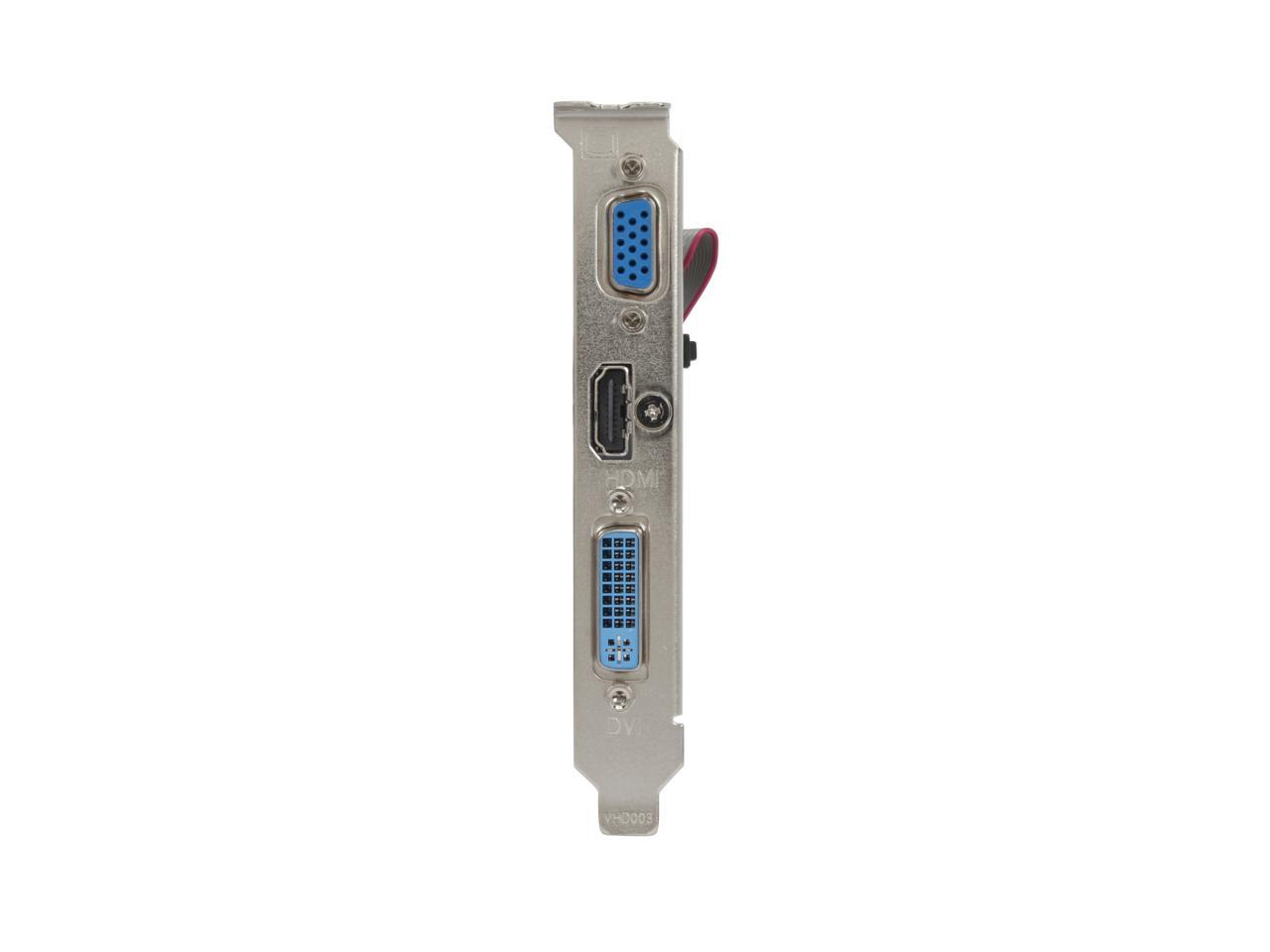 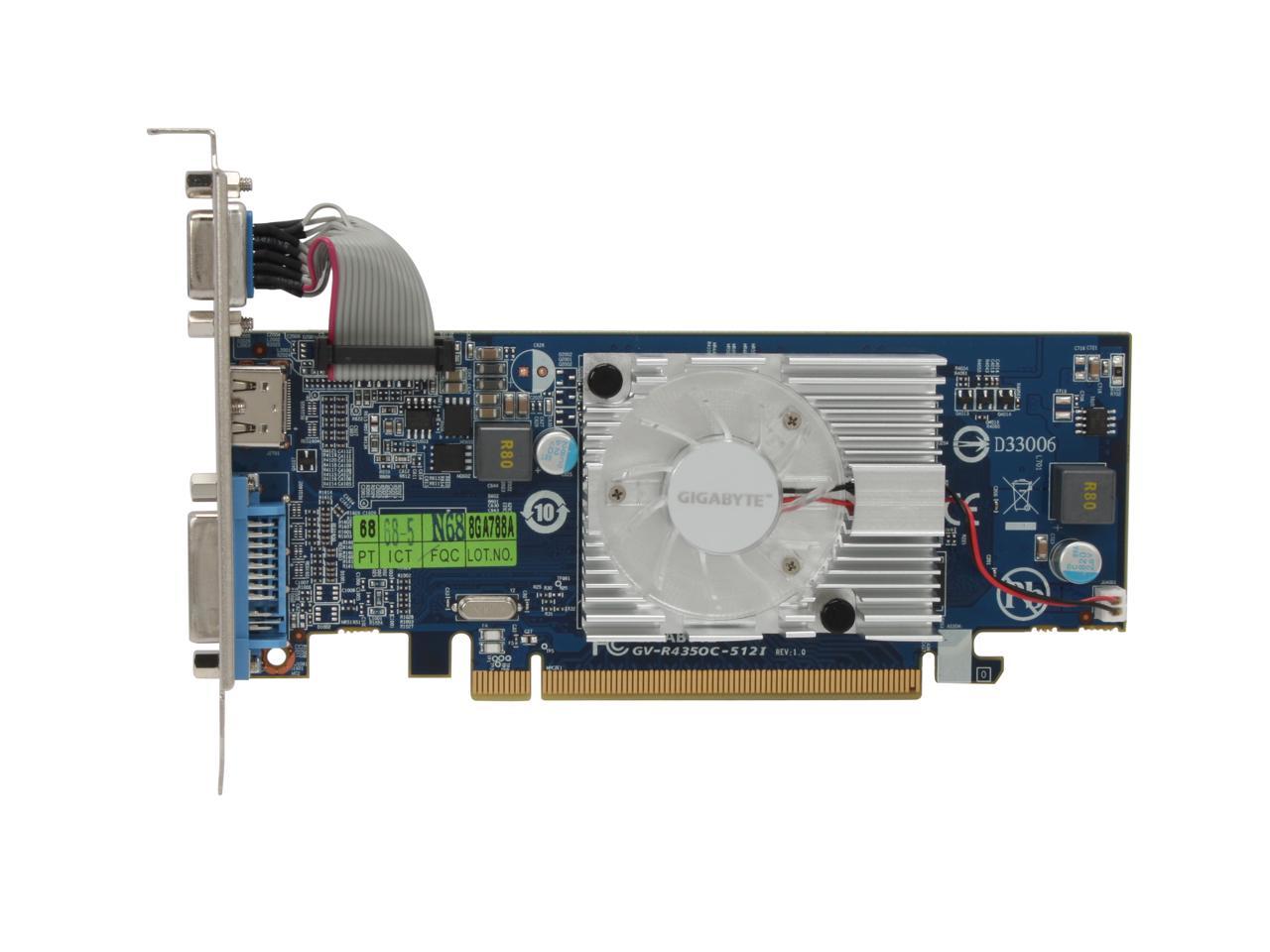 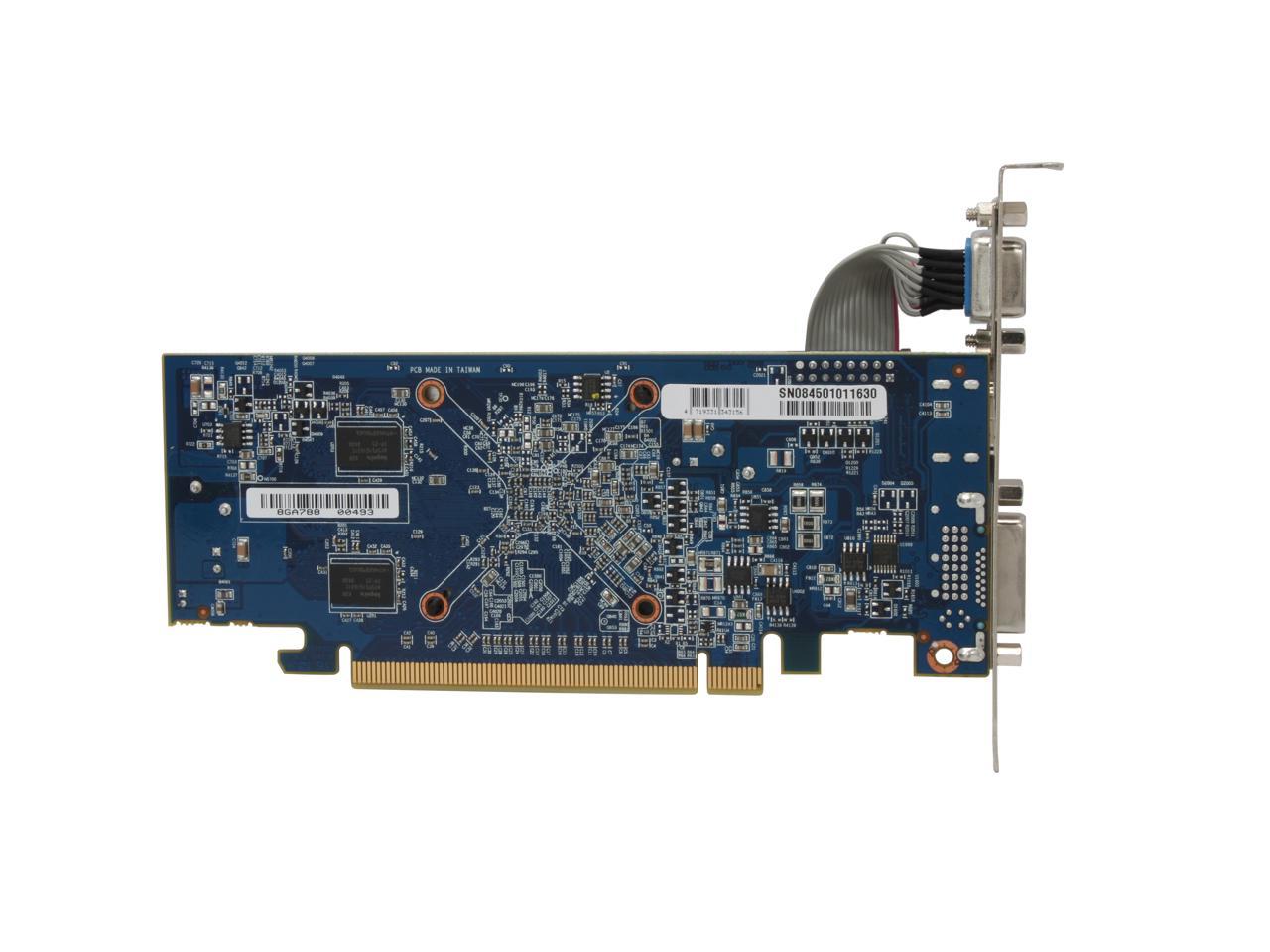 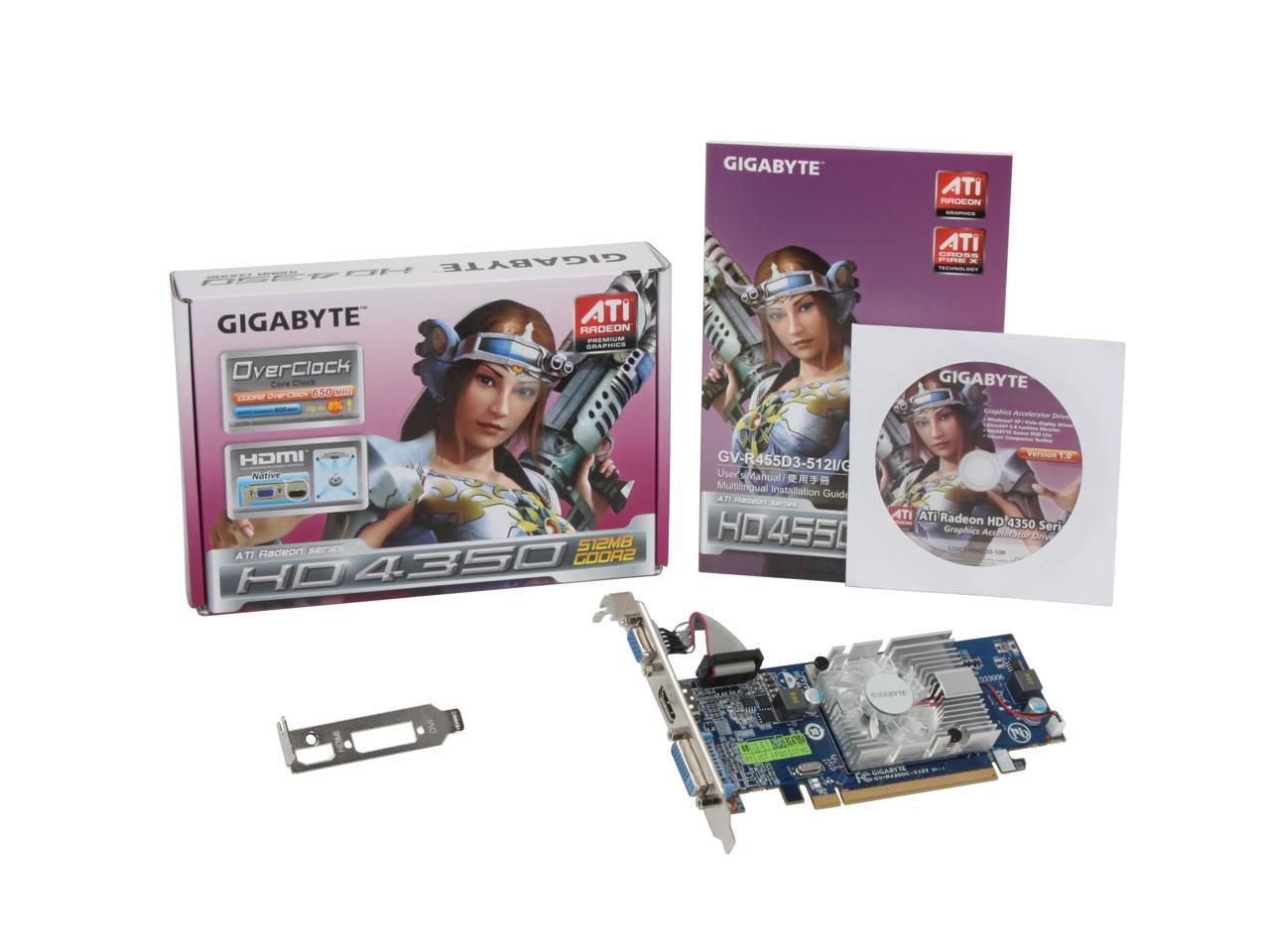 (445) Write a Review
OUT OF STOCK.
Specs
Reviews

Learn more about the GIGABYTE GV-R435OC-512I

Pros: Works great with DXVA support for 1080p HD content with high bitrates. Fan is very quiet and almost inaudible. HDMI audio has worked fine, but I haven't hooked it up to a nice receiver and speaker system to fully try out the clarity.

Overall Review: Those who are having trouble getting HDMI audio to work, it's very easy and has been noted multiple times for people getting ATI cards with the intentions of using the onboard sound. Follow these steps and you should be fine: 1) Uninstall ALL video and audio drivers from your OS, grab a nice driver cleaner program to help you with this. If you're starting off with a fresh install of an OS, you're fine. 2) Install the latest Catalyst drivers from http://game.amd.com/us-en/drivers_catalyst.aspx 3) Install the Realtek base drivers from www.realtek.com 4) Install the Realtek HDMI HD audio drivers from www.realtek.com NOTE: It is best to reboot after each of these 3 drivers are installed.

Pros: I needed HDMI-out on my two year old PC, got a new HD tv and all. I am not a gamer and I am thrifty - so I got this. I am very pleased with the results. Three connections, D-SUB, DVI, and HDMI. But please know that only two can be used at the same time. The misinformation in the reviews is troubling, the card works just great. It's a single wide and I don't hear the fan. ATI's Catalyst software is a little confusing but it does work and is stable. So here's my setup, two lcd monitors and the recently added HDTV. I hooked all 3 up but could only use two at a time. My motherboard has video on it, never even used it before, so I did some looking around. Seems the word is that you can't use your express card video and on-board video at the same time - bunk. I can use all three now easily. There's a bios setting to choose the first video boot device. I could run 4 displays if needed.

Cons: Catalyst is workable but isn't all that straight forward.

Overall Review: Inexpensive HDMI solution that works great. I get a crisp, sharp 1920 by 1080 on my new 52" Sharp HDTV. Oh, and as for audio over the HDMI connection - it works great too. I am, however, unable to test if it transmits 5.1 etc. It probably does.

Pros: The card comes with the low profile adapter, something that more expensive cards want to charge you at least $5 for. The operation is very quiet and it doesn't occupy two slots.

Overall Review: The blueray (rip) preformance is good and the quality output is fantasic, better then the Nvidia 8600GT that I origionally had. This system went into a Dell GX280 SFF case and turned what was a pretty useless PC into a great media center box (use XBMC) when paired with a WiFi-G card.

Overall Review: Installed as a second video card so I could add a 3rd monitor. I already had a 4870 Radeon, so Catalyst was installed. All I had to do was install the card, power up, and go directly to Catalyst multiple display settings to make it an extension of my desktop. That's about as plug-and-play as you can get. Whether or not I get my rebate remains to be seen.

Pros: Open source driver (radeonhd) in Linux works great as long as you have an up to date kernel and Xorg. Movies look wonderful at 1080p on an HDMI TV.

Cons: Fan is tiny and therefore louder than either my stock case fan or stock CPU fan at idle speed. Not enough to disturb movie watching, though. HDMI connector is closer than I expected to the top of the low profile bracket; if your cable has a bulky connector, you may find it a tight fit.

Overall Review: Got me to upgrade my Debian stable box to testing. The only "3D" game I play is Stepmania, so I cannot speak to performance in that area other than that it is adequate to move a bunch of arrows up the screen. Have not tried to get audio going through HDMI yet, but it does show up as a sound card in lspci.

Pros: Nice performance. HDMI Output. Low profile. Replaced an older ATI board and been very happy with the improved speed.

Overall Review: Never recevied my rebate. Got full confirmation e-mails that all was well in April but nothing since. HATE rebates!

Pros: Nice graphics ; recognized easily by Windows 7 and worked flawlessly with latest drivers from AMD / ATI website. Display brilliant AERO colors in Windows 7 Beta build 7260. I am not a gamer, however, built this for a HTPC, plays DVD's, Blurays flawlessly. Comes with HDMI, DVI and VGA ports built-in on the back ; if the rebates comes in ; it's only $ 20 bucks for the card ; great deal ; Thank you, Newegg

Cons: The weakest link in my PC with a Windows score of 3.8 ; I am running it slightly overclocked....that's the reason for loosing one egg ; I would have thought it would be a 5.0, based on it's cheap price, however it's a 3.8 ; which probably a motherboard with integrated graphics would get you. Other than the score, no complains.

Pros: Runs wonderfully in my Arch Linux HTPC playing back video on my 1080p Sharp HDTV over HDMI. Audio worked as well after some tweaking of the settings.

Cons: I couldn't get HDMI audio working with the open source RadeonHD driver (though it is supposedly supported). However, it did work with the Catalyst driver, which required some tweaking of xorg.conf to obtain acceptable performance, but worked in the end. I wouldn't recommend this card for gaming, though, as the glxgears framerate was only ~2000 FPS.

Overall Review: If you run into problems with underscan (i.e., black bars on all sides of the image) when connecting this card to an HDTV with the Catalyst driver, there is a setting in the newer driver versions that allows you to fix that. I only use Linux, so none of these comments apply to Windows/Mac.