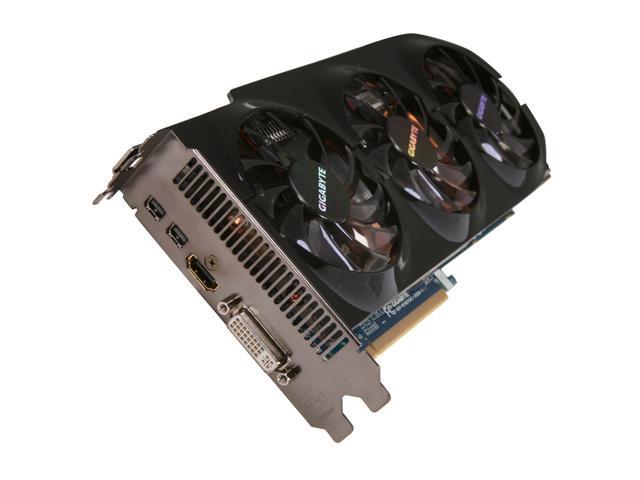 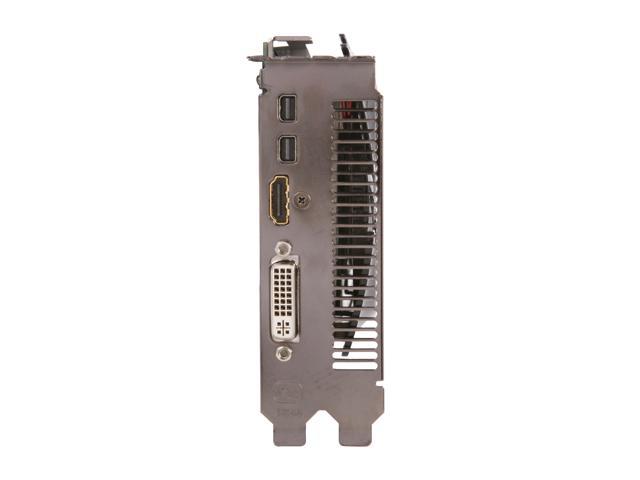 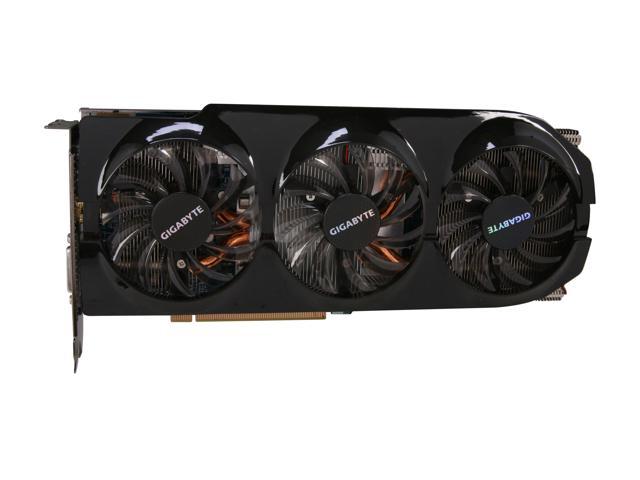 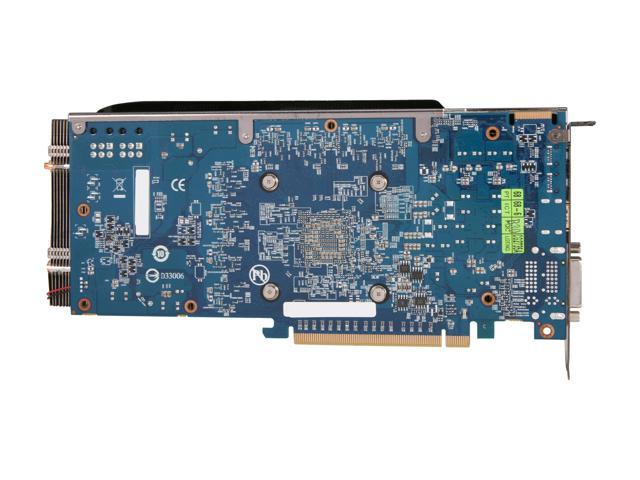 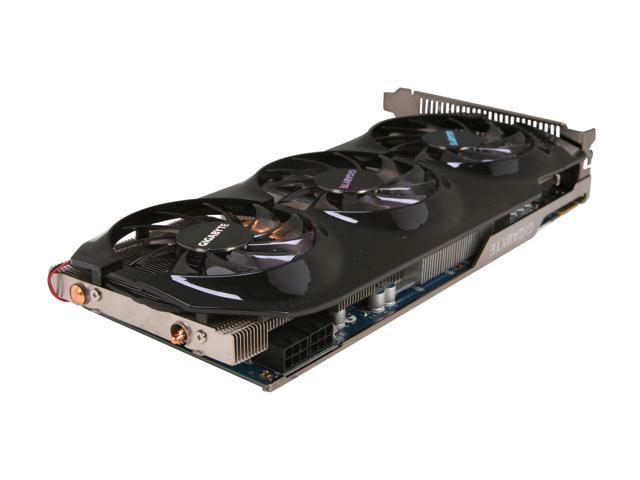 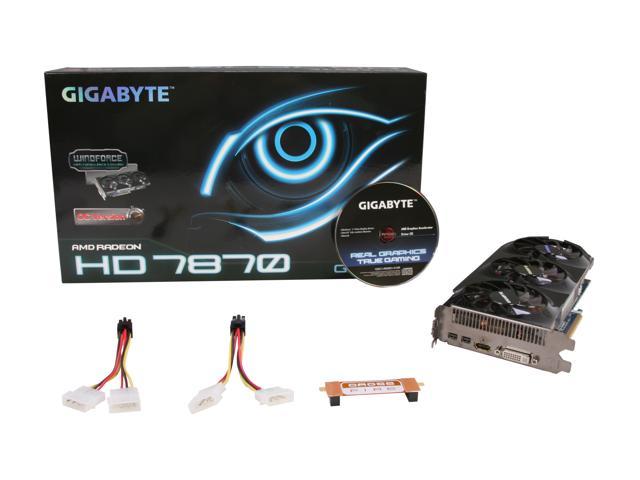 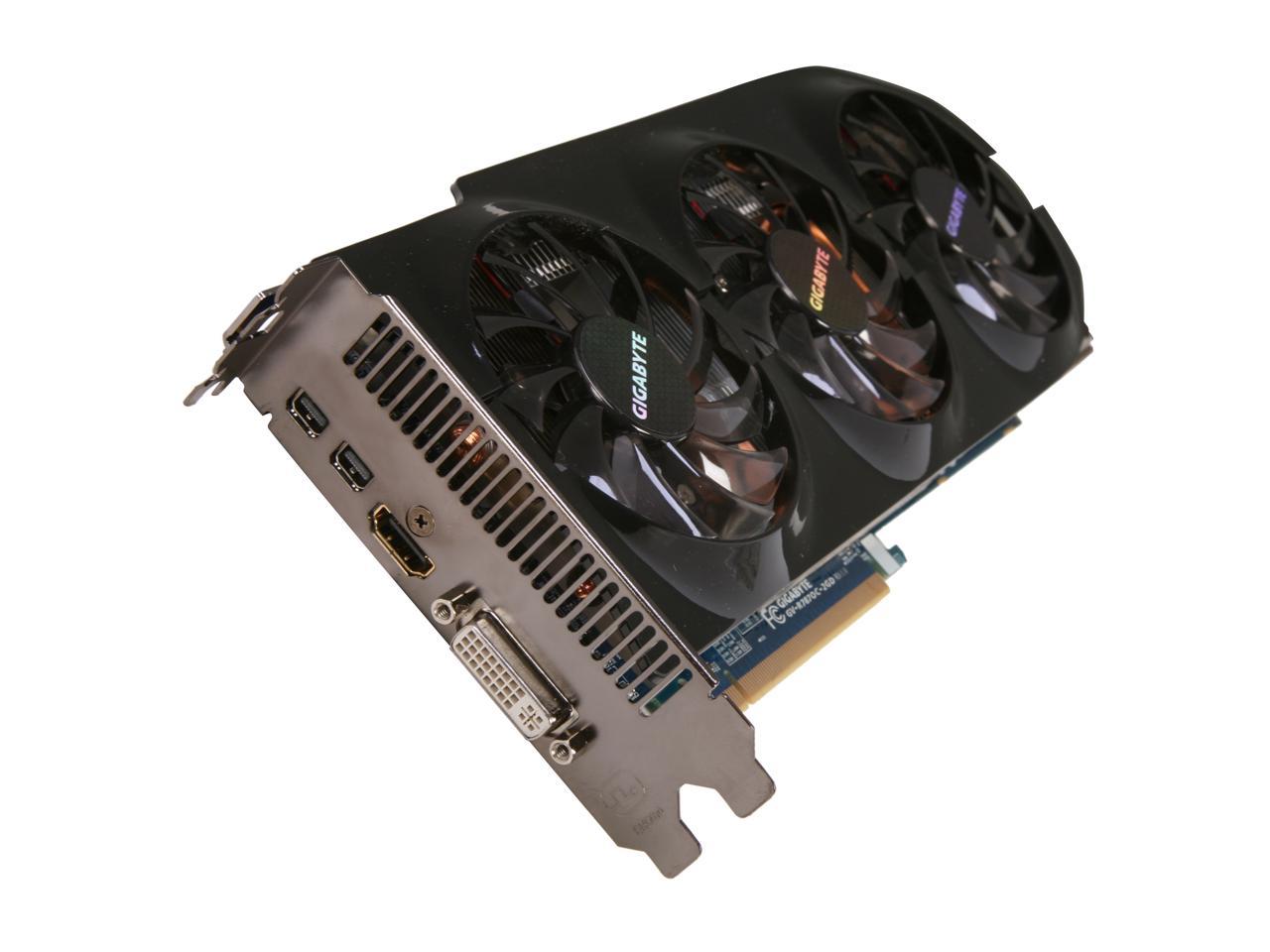 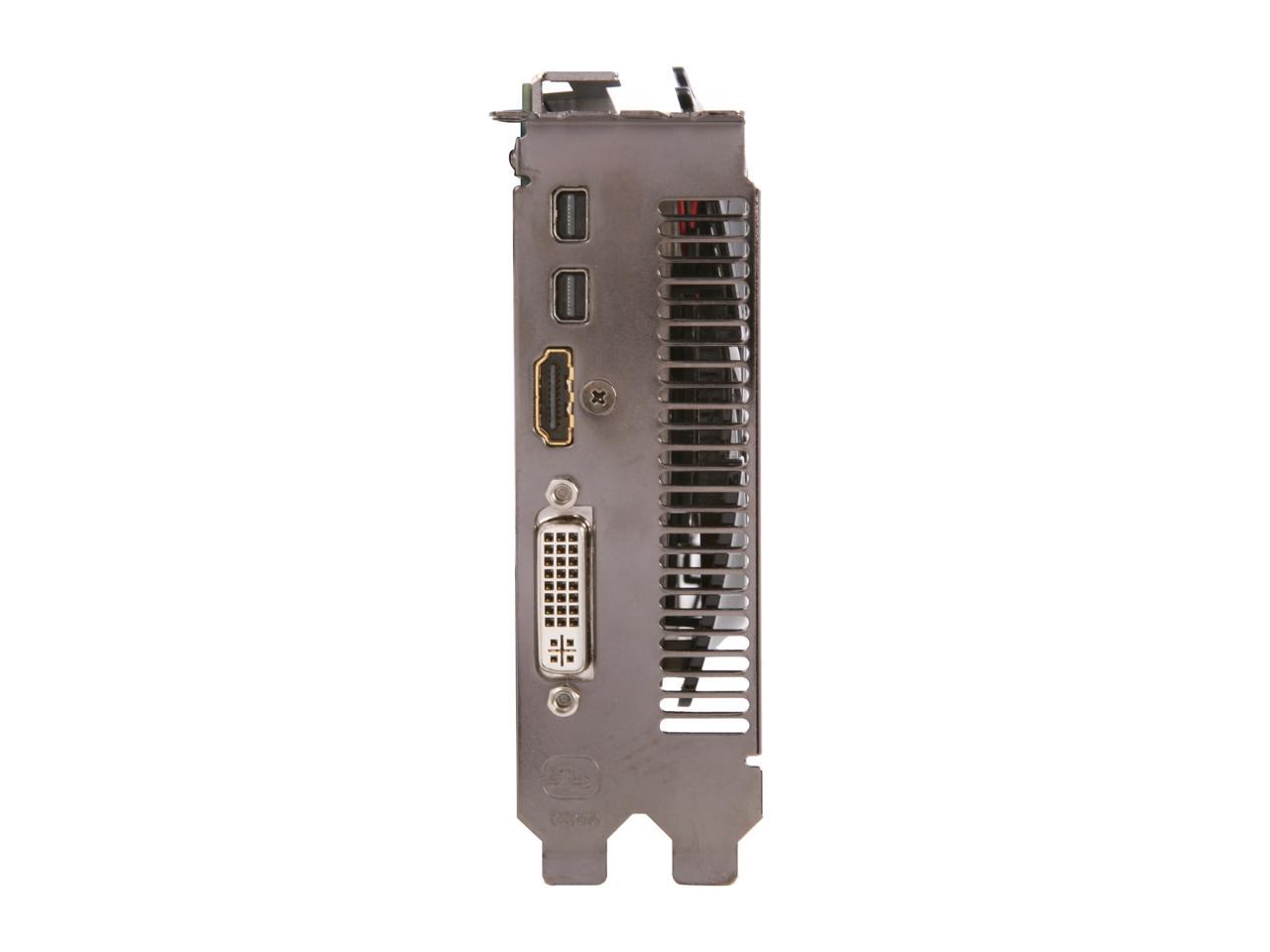 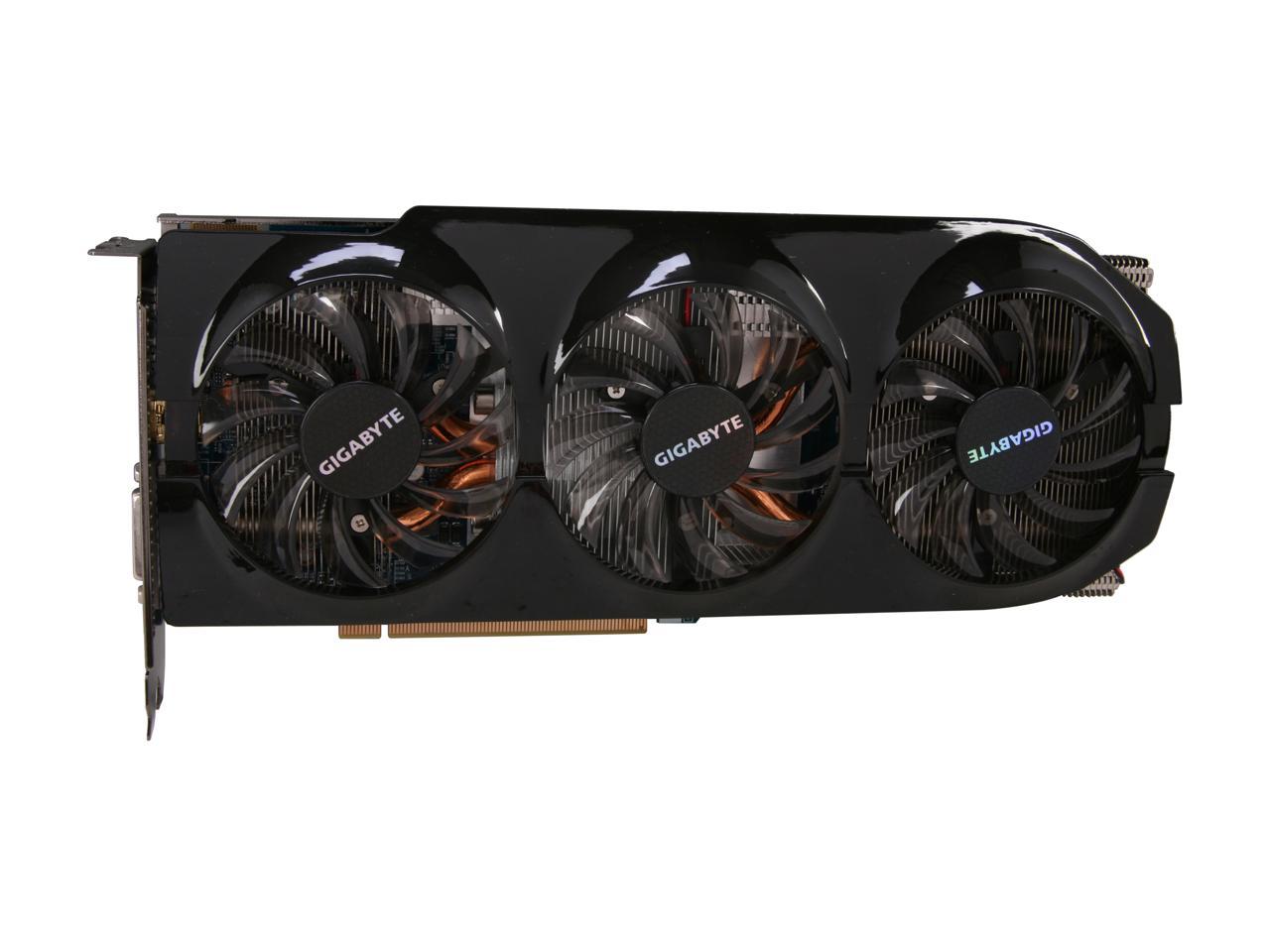 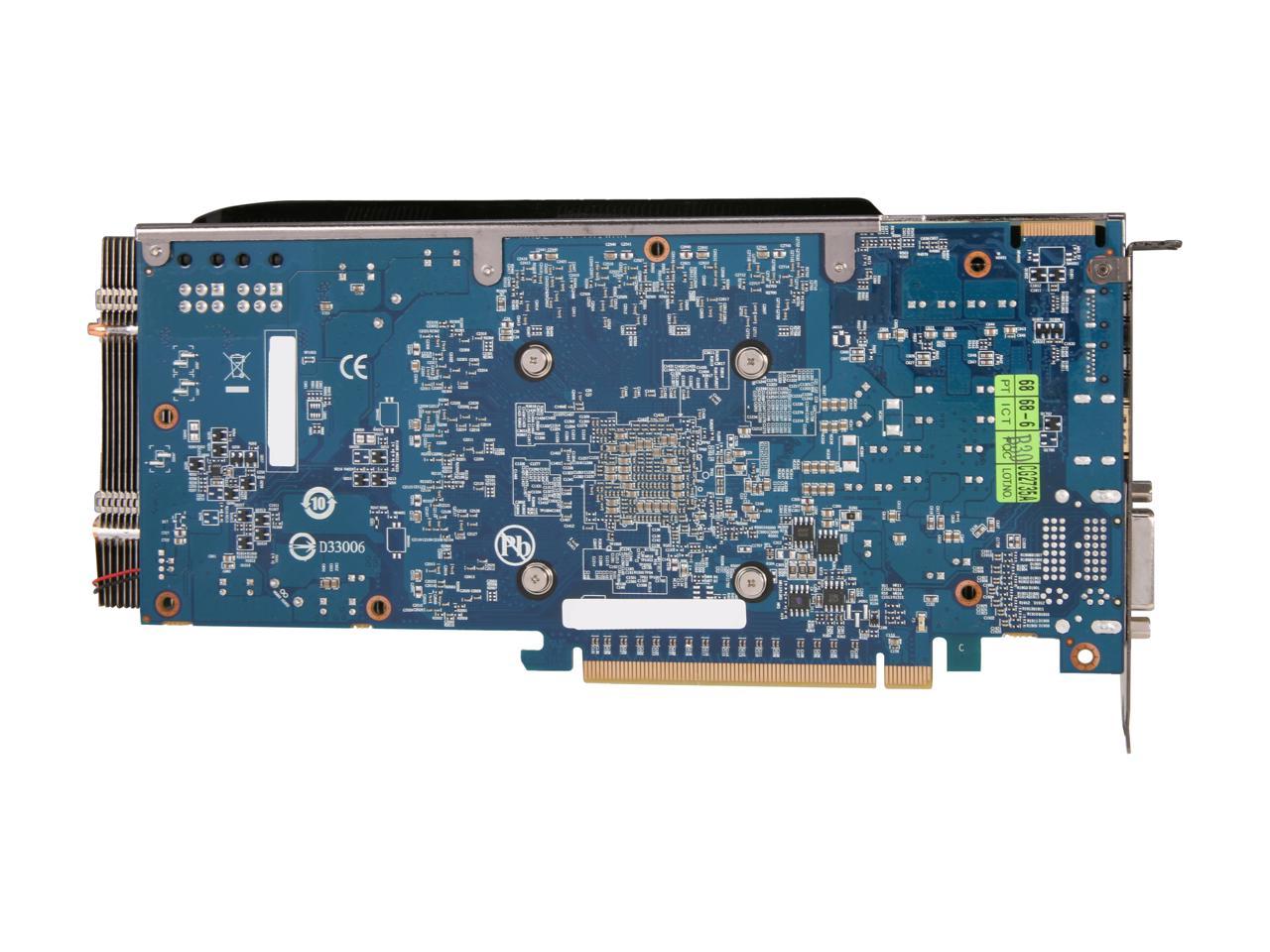 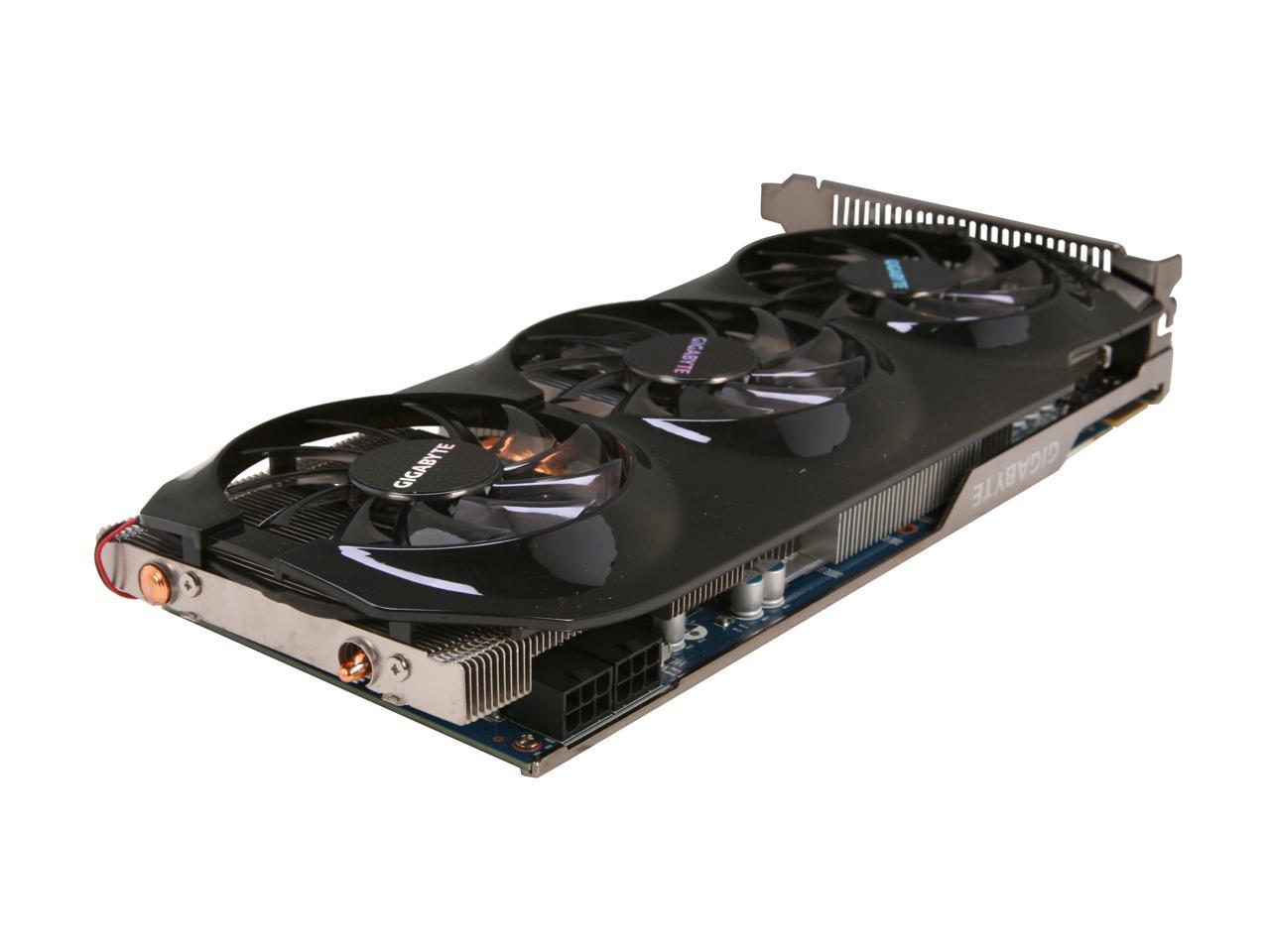 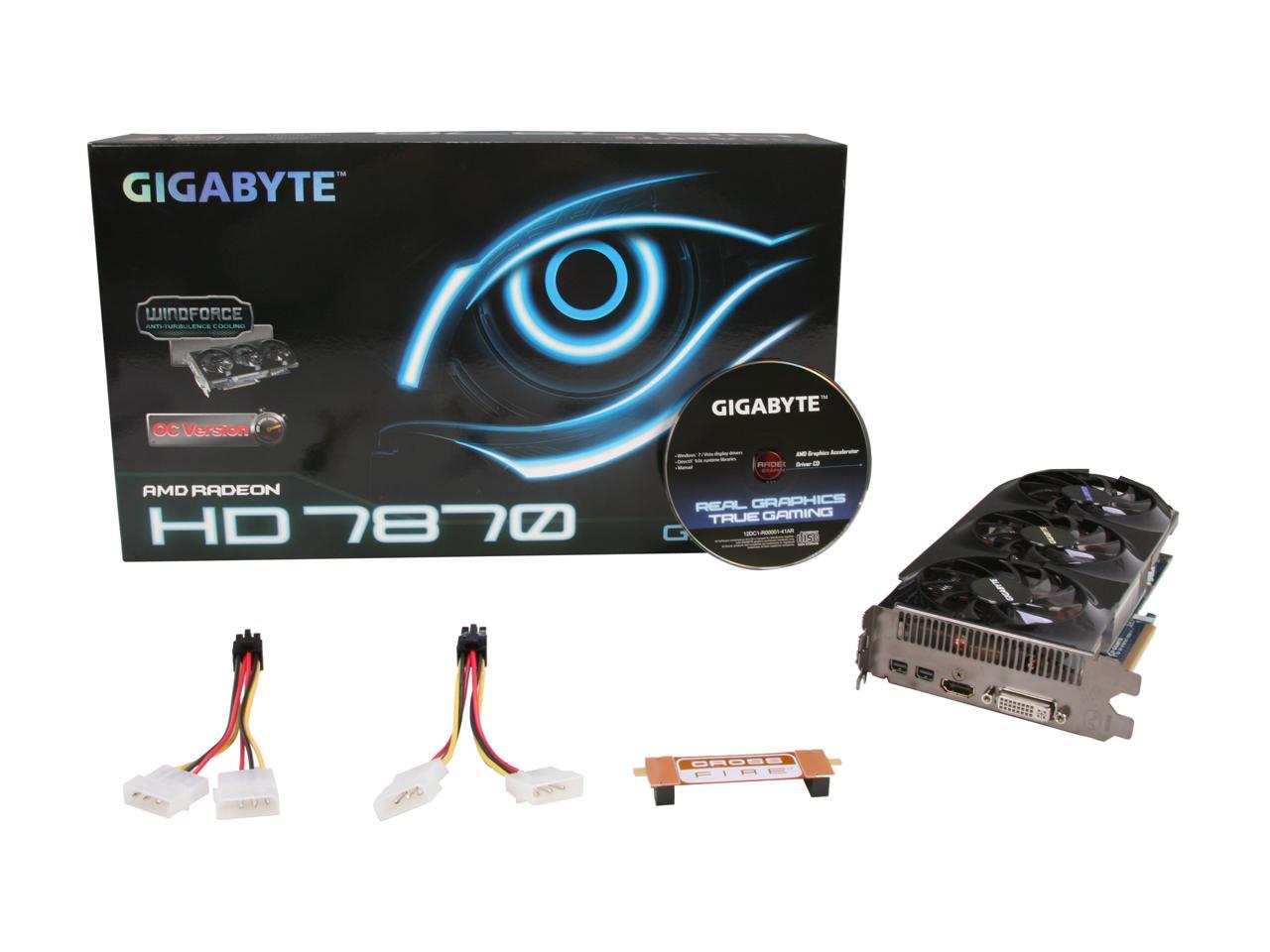 (269) Write a Review
OUT OF STOCK.
Overview
Specs
Reviews

Transform your gaming with a new level of realism and environmental interaction with the GIGABYTE Radeon HD 7870GHz edition. Based on the highly acclaimed 28nm GCN architecture, this card is built around 1280 Stream Processors and an abundant amount of memory for smooth gameplay in the hottest DirectX 11 titles. Factory overclocked 1100MHz Engine Clock means more graphics power for higher framerates even in high game detail settings. The latest Eyefinity 2.0 with 3D support redefines your entertainment with immersive, stereoscopic 3D visuals across multiple monitors. An array of cutting-edge graphics technology such as AMD App Acceleration, AMD PowerTune technology, and AMD CrossFire are built right in, offering you more than one way to elevate your gaming experience.

Learn more about the GIGABYTE GV-R787OC-2GD

Pros: Incredible graphics; runs Far Cry 3 like wet ice on wet ice. Skyrim went from stuttering to being glass-smooth. Rage runs like it was meant to now.

Cons: Card came possessed by the angry spirit of a 15th century Duke of Normandy who cursed me and the next seven generations of my family. Re-seated the card and the curse was lifted. Not bad enough to deduct an egg, 'tho.

Overall Review: I keep switching between Nvidia and ATI; this time, ATI had the upper hand over the Nvidia offerings in the same price range.

Pros: - Gorgeous graphics and seriously good rendering of state-of-the-art games in 1080p - Gigabyte build quality; handsome on a Gigabyte mobo - Windforce 3x cools quietly whether stand-alone or 2-up in XFire - Easy on the ears even at 70% fan speed - Reasonably low power draw due to 28nm architecture - Fast and stable with Catalyst 12.4 (or 12.3 if XFire'd) - Factory speed is impressive, but for more OC fun (along with extra heat and possibly fan noise) either CCC or MSI Afterburner can crank things up handily. Under grueling loads with Afterburner's power limit set to +13%, GPU stayed stable at 1178MHz while VRAM remained flawless up to 1450MHz. (Benchmarks tended to improve more significantly with core clock increases than with memory frequency increases. Core speed max'd out at 1178MHz during testing regardless of power adjustments, with higher freq's yielding BSODs) - After all is said and done, OC'ing this card is a somewhat frivolous pursuit

Cons: - Price is nowhere near as tempting as its performance - CrossFire is craaazzy good with this card, but doubles cost (hey Newegg, how about a *buy one get 2nd half off* sale for high-end graphics cards?) Luckily, one of these should prove ample for most gamers - It's no secret that AMDs Radeon HD 7800 and 7900 series drivers are in a state of evolution; patience is paramount when exploring the capabilities of these cards - No CUDA cores to leverage ones FAH scores (Wait, that's not fair to mention!)

Pros: This card offers a lot of performance for the price! Most reviews put the reference 7870 right on the heels of the GTX580 and with a mild o/c, it exceeds it for quite a bit less money. This one comes pre-overclocked and has better cooling than the reference AMD design. I was also pleasantly surprised at how small this card is compared to my old 5870. I was actually worried it might have issues fitting in my case, but the PCB is actually about an inch shorter. Pics of this card make it look huge.

Cons: The stock fans are actually kind of loud. This may not be a con for some people, but I'm coming from a 5870 that I slapped an Arctic Cooling Twin Turbo Pro onto, so I was expecting a quiet card out of the box since this card doesn't use the whiny stock cooler. Fortunately this can easily be fixed without much of a difference in temps by turning the fan speed down to 30% from 40% in CCC, so I'm not docking an egg for it. :)

Pros: Power efficient, The latest drivers bring a boost from 6-35% in FPS on several titles. Ideal if you are running 1080p or lower

Cons: None. The card is very competitive for its segment now with the improvements from the AMD Drivers team

Pros: I bought this shortly after it was released. I've never had an issue with it. It runs fast, and it runs quite. With the exception of when I turn the computer on, I've never heard the fans spin up to an audible level. I namely play Starcraft II, Mass Effect 3, and Portal 2 at the moment. All at 1080p. In Starcraft II, I can max every graphical setting, and still manage 30-40+ FPS, even on large battles. In Mass Effect 3, with AA and max AF enabled, I still manage 60+ FPS, be it Campaign or Multiplayer In Portal 2, everything is maxed, including 8x AA, 16x AF, and Triple Buffering VSync, yet I still hit 60 FPS. Also, Unigine Heaven v3.0 1920x1080, 2x AA, High shaders and textures. Trilinear Filtering. Anisotropy was set to 16, Occlusion, Refraction and Volumetric were all enabled. With Normal Tessellation, this card managed 58.9 FPS average, and an overall score of 1483 All of this, while never breaking 60c, thanks to those three fans.

Cons: A bit pricey at launch, but that's everything nowadays.

Overall Review: Bottom line, this card is powerful. It will easily max just about everything at 1080p, and can still do more. It doesn't use a lot of power, it runs cool and quite, and it's pretty reasonably priced (now). I would highly recommend this card. My Build: Core i7 2600k @ 4GHz Corsair H80 cooler w/ 1 Pull fan (Corsair fan) ASUS P8Z68-V Pro/Gen 3 Motherboard Gigabyte 7870 OC GHz edition @ 1100 MHz core/1200 MHz RAM Corsair Vengence 16 GB (4x4GB) RAM @ 1600 MHz/CL9 OCZ Vertex 3 120 GB SSD Boot Drive Western Digital Caviar Black 1 TB Storage Drive Corsair TX750 V2 Windows 7 Ultimate x64 PS. While, I haven't messed with it much, you can overclock it further if you so decide.

Cons: My only issue has been with artifacts in 2d displays, like browsers. I contacted Gigabyte tech support and was finally issued an RMA. The shipping was ground and took 8 days each way. Gigabyte tested it in 3d apps and returned my card with no problems foun. 20 days wasted and 10 dollars shipping. I posted a 2 star review on this site and was contacted by Gigabytes Newegg support team. They gave me another RMA and a prepaid shipping label. Sent a new card and were very helpful with the e-mails.

Overall Review: The support folks that watch these posts have saved a customer...You have my thanks.

Pros: Awesome card. Great upgrade from an hd 5670. Plays all games I own on ultra/max settings including BF3 and need for speed most wanted. Easy install. No problems at all. O/C guru is pretty cool. Can't eat a free game either. Thanks gigabyte and news egg.

Cons: I can't fit two on my motherboard with my sound card in.

Pros: -Super Quiet, fans don't get obnoxiously loud until 70% -Amazing heatsink and fans (Card idles 27c and hasn't even surpassed 46c yet [while playing Just Cause 2 and Assassin's Creed: Revelations, hovers around 43c BF3 maxed out], that may sound like an exaggeration, but believe me, I'm blown away as well, haven't done much testing yet], with an ambient temp of 26c) -Low power draw -Trades blows with a GTX 580 in some applications, demolishes the 570 at this clock/voltage -The 256-bit memory bus and 2gb of VRAM will be plenty sufficient before my rig is completely outdated. -3 Year Warranty with Gigabyte quality -Metal support to support the PCB since it's so long -Factory OC -Card is very well built, sturdy

Cons: -Card is very long, not a con for me though, for those of you that want to know, just a hair over 10.5 inches

Overall Review: I purchased this card off of a different site, but before this card I bought an Asus 7850 DCII a few days before this but it came DOA, I was regretting not getting this card the moment I purchased it, but as soon as it came DOA, I was almost relieved to have that happen. I immediately jumped on this card and I love it. It's cooling is phenomenal! I HIGHLY recommend this card, I am pleased. I wanted to go for the 7950 but the only version I would have went for is the Gigabyte version and that was out of my budget. But wow, this card is far beyond what I thought it would be for cooling and GPU capabilities, also, Everything maxed out in BF3 @ 720p i get about 65 fps average.