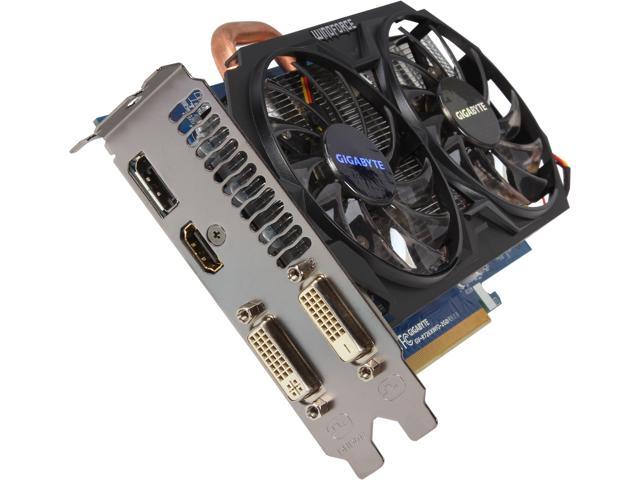 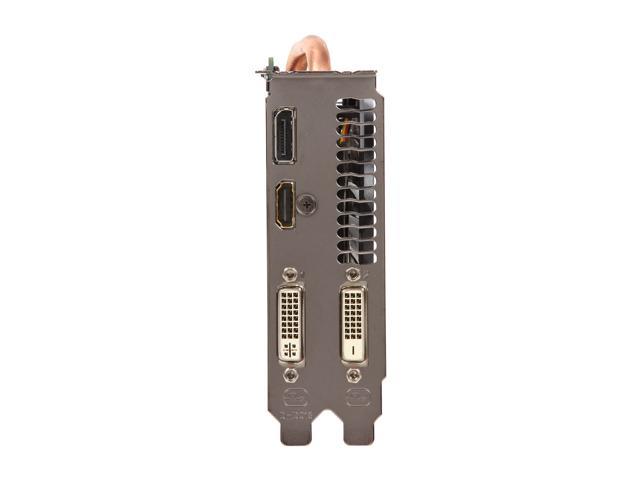 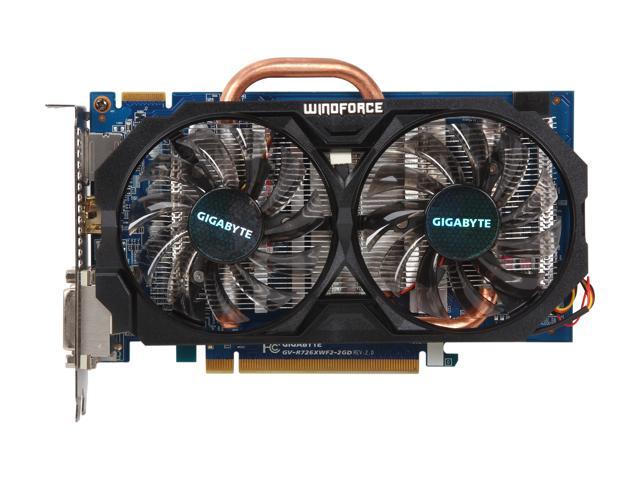 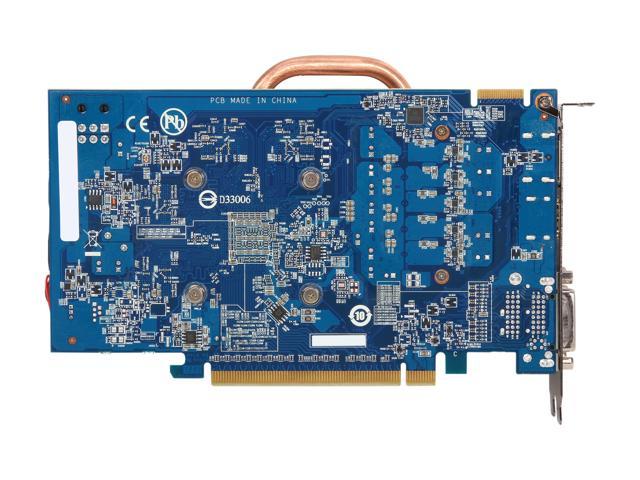 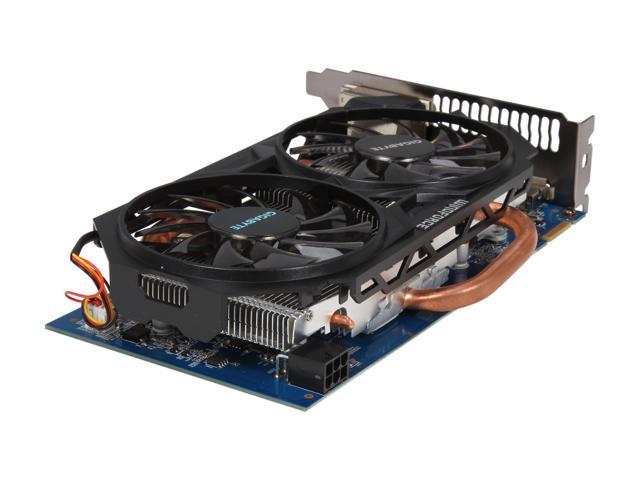 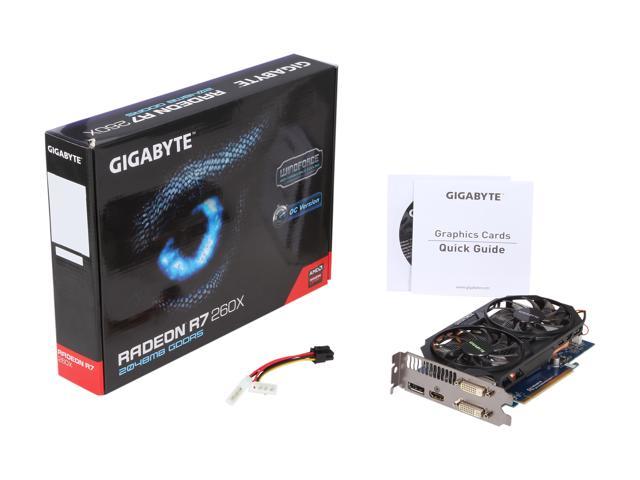 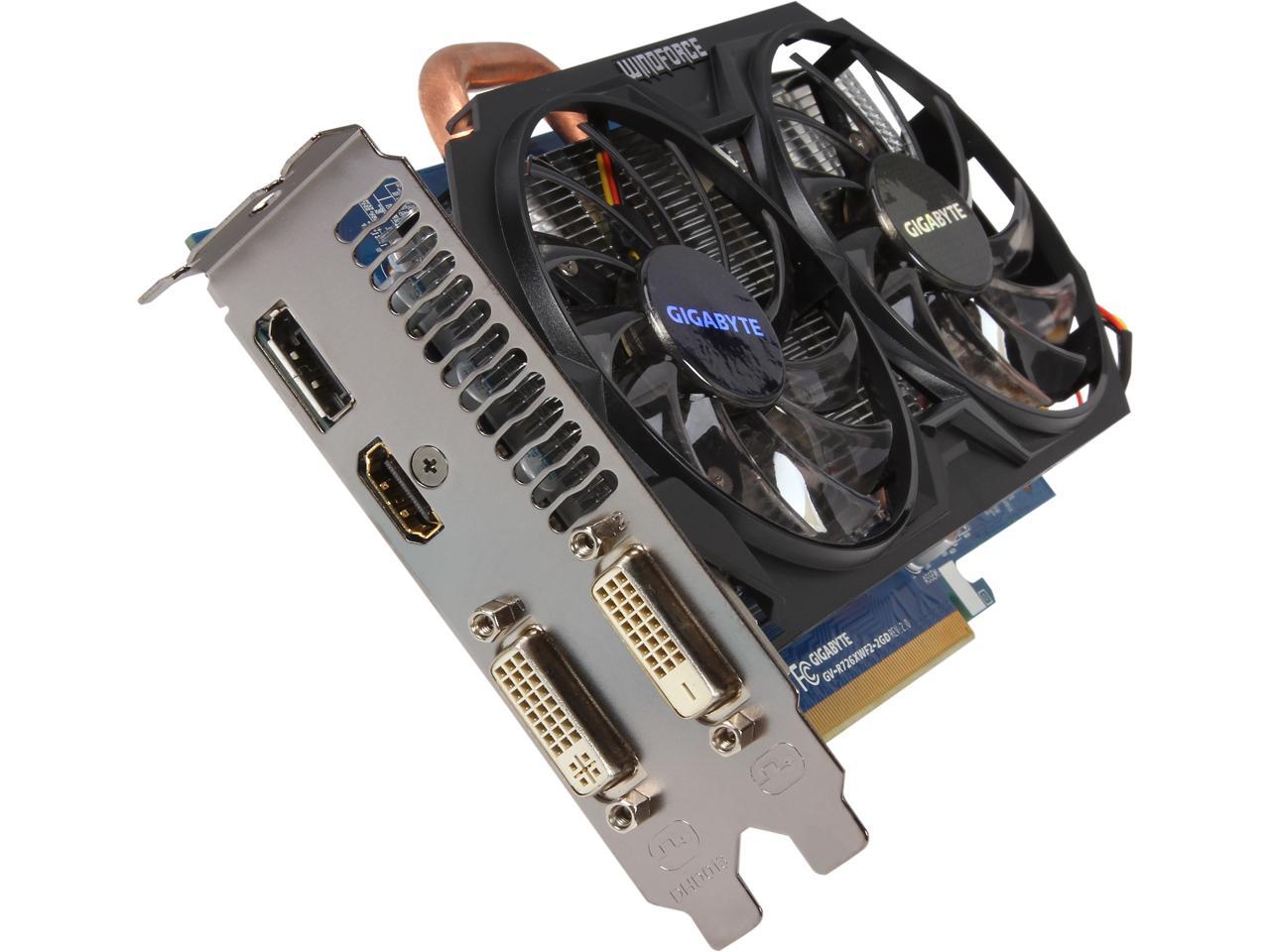 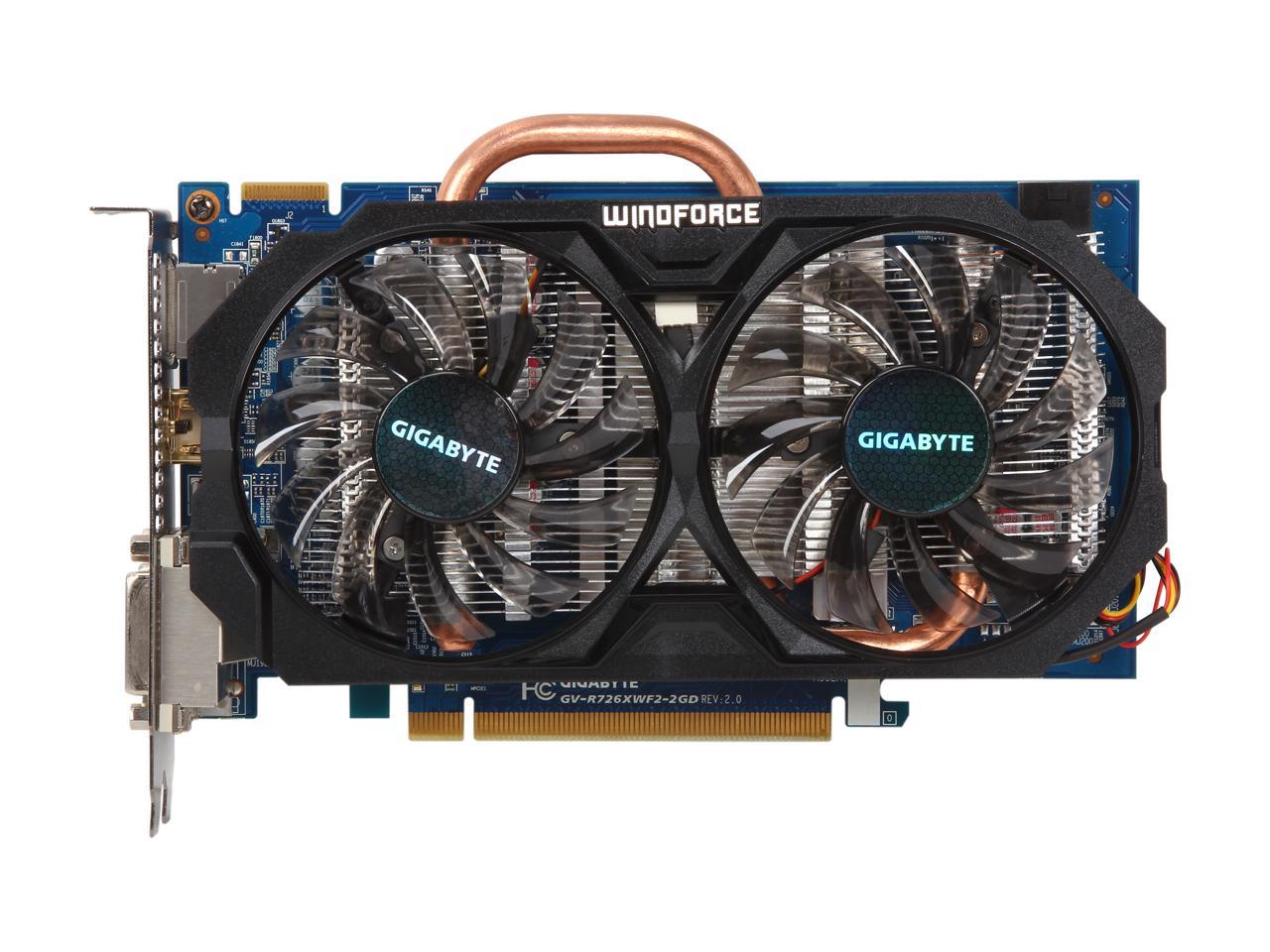 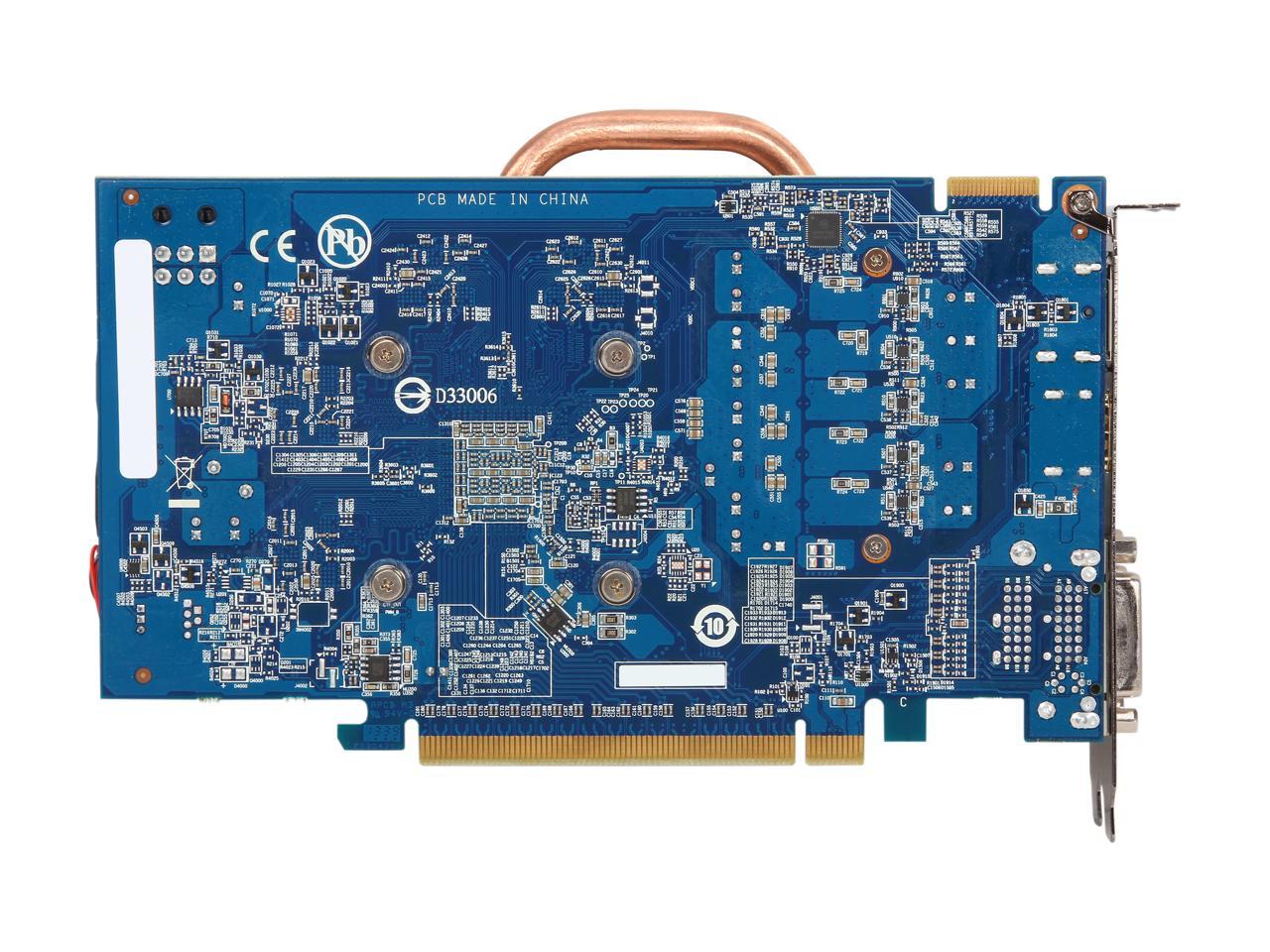 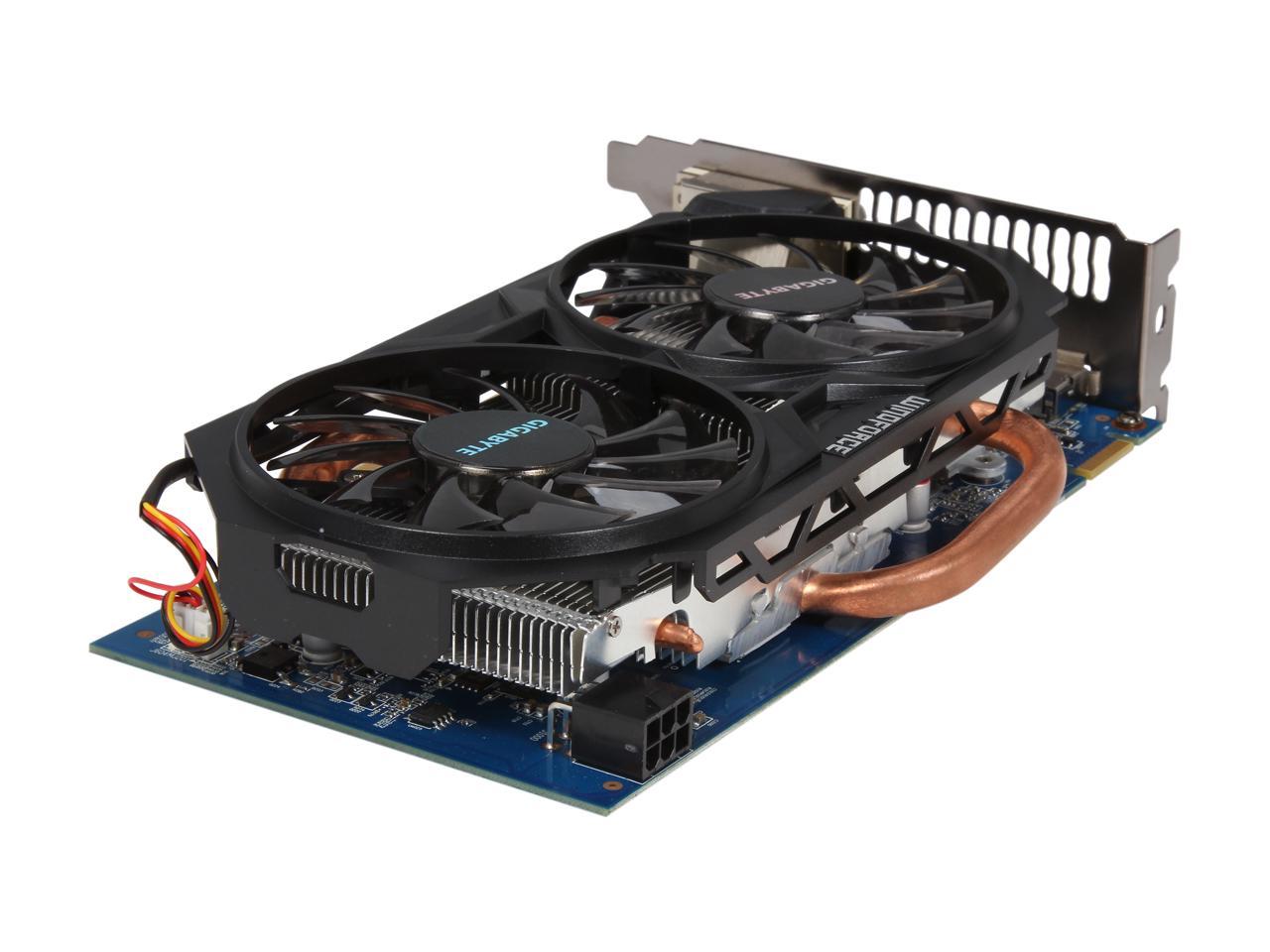 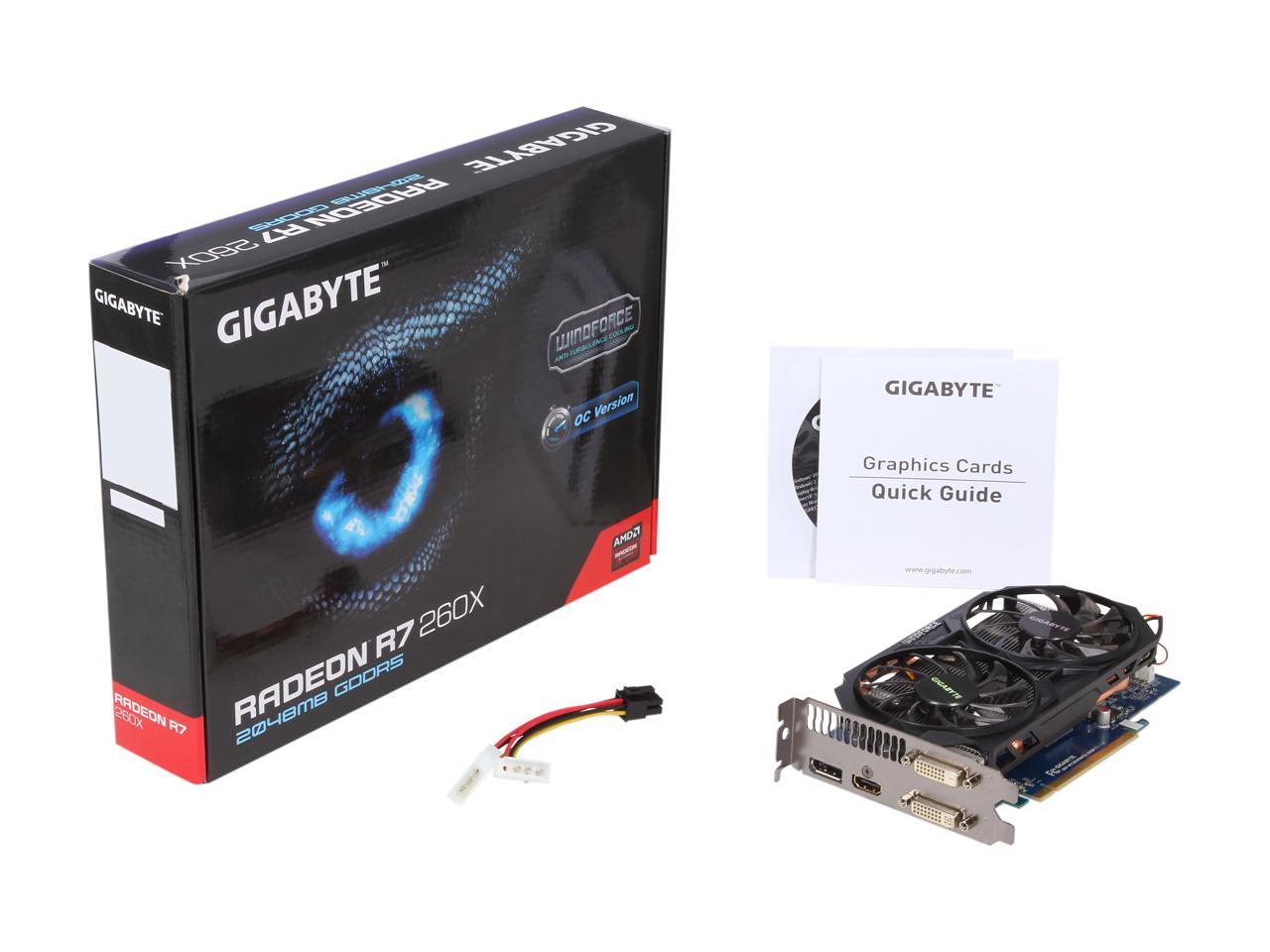 The GIGABYTE GV-R726XWF2-2GD REV2 is powered by Radeon R7 260X, the latest AMD GPU designed to take your gaming to the next level. Based on highly acclaimed AMD 28nm GCN architecture and boasting support for DirectX 11.2, the Radeon R7 260X brings you spectacular graphics in the hottest titles. You can game beyond the confines of a single monitor and embrace the true potential of PC gaming with the ultra-high resolutions of AMD Eyefinity multi-display technology. AMD TrueAudio Technology adds breathtaking reality to game sound, making your games more impressive. A rich set of AMD innovative technologies is included, such as App Acceleration, AMD PowerTune, AMD ZeroCore, and AMD HD3D technology. With these technology advancements, you'll get more than one way to elevate your gaming experience.

This model is factory overclocked to 1188 MHz(std: 1100MHz) Core Clock for smoother gameplay.

Cons: -drivers can be a bit of a pain to get right on r7 cards in general, I didn't have any issues with this one. -memory clock speed was slightly slower than the ASUS version, but the drivers were easier to get right on this card

Overall Review: Once the driver issues were sorted out, this card performs like a much more expensive card. The bang for the buck here is unbelievable. Plenty of performance yet it sips power. I cannot recommend this card enough if you are willing to look past the driver issues coming from AMD (which are getting better, and I personally didnt have any issues with this card, though I did have many issues with other brands of the r7 260x). I tried both the ASUS and an XFX r7 260x cards before settling on this one. It was worth the extra $10 solely for the lack of driver problems, and it performs like a champ. Many hours of BF4 on high while running GPU-Z give me temps not above 60C with a decently cooled case. I am pleased.

Overall Review: so far so good, getting great fps 60s on theif on ultra settings, just ordered a second for crossfire gona see how that does

Pros: Good Value. I don't play First person Shooters, so I cant say much for those type of games, but this runs Skyrim, Swtor and Lotro without an issue. I have only had the Card for 1 day . I have done several hours of gaming, no heat issues, or hick-ups. I would Recommend. mid range card at a lower range price price. Will update with any changes.

Cons: One of the copper heat tubes is bent a little. don't appear to be an issue . I bought this card from a Competitor to save 15 bucks. My mistake ..Wont Happen Again ! I was suppose to get the Radeon Silver Reward Code. Didn't come in the box or the email... not really a Con* but would have made the Card a Super Bargain instead of a good one ..

Overall Review: Don't Stray from New Egg ! . I've spent almost $10,000 here in the last 3 1/2 years , Never had any issues with the Products or the Customer Service.

Pros: I bought this card based on a friend's recommendation and reviews. The friend is a true gamer and runs a 780TI GPU. After this card would not run in my 1.5 year old Dell; we tried it in his ~2000.00 build and it performed flawlessly on BF4. I built my own system starting with this card and it is wonderful on Far Cry 3, Thief and Max Payne. Great card for the $$! I am not a "true" gamer.

Pros: Nice graphics card. Downloaded the most recent drivers from the AMD website and the card works perfectly. Upgraded from a 4 year old 5850. The r7 260x is more than enough to run my 1080P gaming. Gigabyte makes really nice GPU's and this is my second purchase from them. The card runs quiet and much cooler than my 5850 did. Oh, and I did get the AMD silver award certificate and was able to download the two free games. Nice! Some friendly advice, if you're running Vista, upgrade to Windows 8.1 Pro. You won't regret it and all your problems will be gone! LoL.

Cons: Only negative I can think of is that AMD announced the release of the r7 265 just 2 days after I made this purchase. If I had known I probably would have held out for the 265 instead. I thought the 260X was the top of the R7 series but I guess not. Also, I paid the same price for the 260x that they're going to charge for the 265. The price for the 260x will most likely drop to around $119.00

Overall Review: Maybe I'll pick up another 260x once the price drops down on it and put in into crossfire.

Cons: Random Pixilation Locks up the entire system and force reboots Random Black screens BSOD can happen out of nowhere!!! Poor overclocking... cant hold it for long before Pixilation happens. If you play World of Warcraft don't buy this card!!! Cant play battlefield for long!!!!

Overall Review: This card is rubbish for the current times... I would RMA it if I could but I had it for far too long trying to see if I could fix some of the problems but its a card issue from all the research I have done... save your hard earned cash and move along!

1 out of 1 people found this review helpful. Did you?
Manufacturer Response:
Dear Customer, Thank you for your comments. We apologize for your difficulty with your GIGABYTE product. Please contact us at newegg-support@gigabyteusa.com with the case number 122198 in the e-mail subject line. We will provide personalized service and analysis to help solve your issue ASAP. If the matter is urgent, please send us your contact number, and we will contact you. GIGABYTE VIP Support Team
Karl S.
Ownership: 1 month to 1 year
Verified Owner
Won't work in crossfire mode3/12/2015 7:42:11 PM

Pros: Seems like it could be a good card when it works

Overall Review: I have had good luck with Gigabyte products in the past and they honored the warranty but it took a month and a half to receive the same card I shipped them. In the meantime I ordered another card because I wanted my wife to have a working PC for Christmas and assumed I would just put them into crossfire mode when I got the RMA back. The returned card was jittery and wouldn't work in crossfire so they shipped me a new one and it still wouldn't work in crossfire. I reconfigured my own gaming PC which also normally runs in crossfire and tried to get crossfire to work and although both PC would show it as active, FurMark GPU stress test only showed one card. With Crossfire disabled it showed both cards. None of the rendering changed with crossfire enabled or disabled. I also have a Gigabyte motherboard and their tech support just gave up and now I am stuck with a card I can't use since the Newegg return period expired. I won't be buying any Gigabyte products after this ordeal.

1 out of 1 people found this review helpful. Did you?
Manufacturer Response:
Dear Customer, Thank you for your comments. We apologize for your difficulty with your GIGABYTE product. Please contact us at newegg-support@gigabyteusa.com with the case number 120231 in the e-mail subject line. We will provide personalized service and analysis to help solve your issue ASAP. If the matter is urgent, please send us your contact number, and we will contact you. GIGABYTE VIP Support Team
Shaun H.
Ownership: 1 month to 1 year
Verified Owner
Good, needed to fix minor cooling issue2/22/2015 11:10:17 AM

Pros: Been gaming pretty heavily with this, and quite pleased. Only one negative issue, which I was able to fix (see below).

Cons: The issue I had though is my entire computer would freeze, and I traced the problem to this graphics card...it was overheating, and would lock up to cool itself. Perhaps some light dust caused it to overheat after a few months, but I noticed the fan was stuck at 40%. I adjusted it to 50%, and now no problems (room temp, lots of use). I was surprised it doesn't automatically adjust. It's still very quiet.