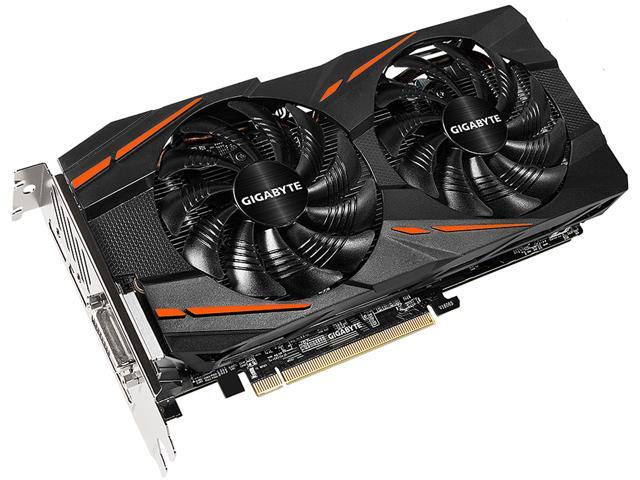 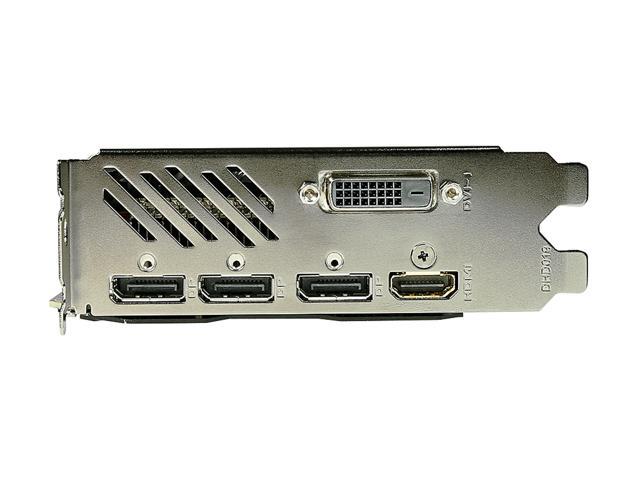 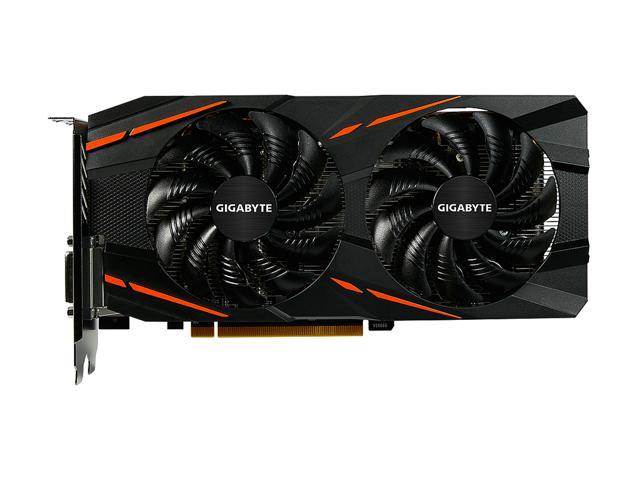 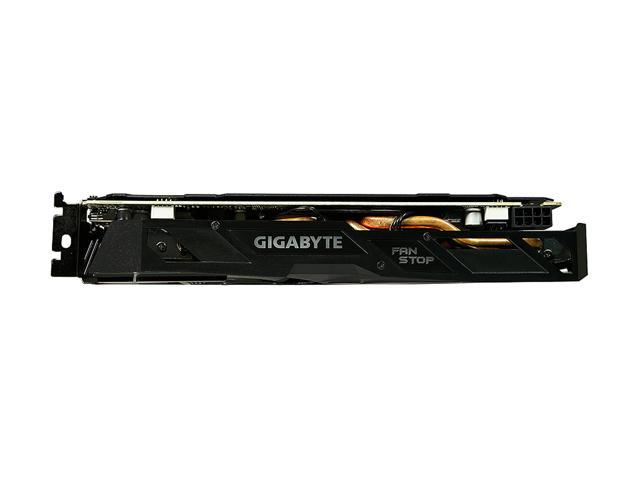 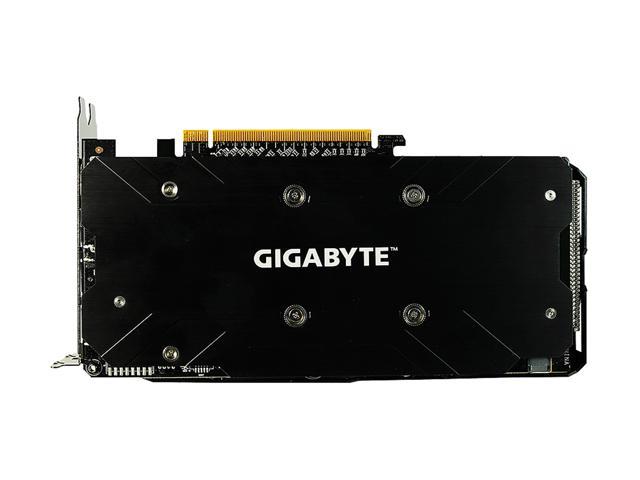 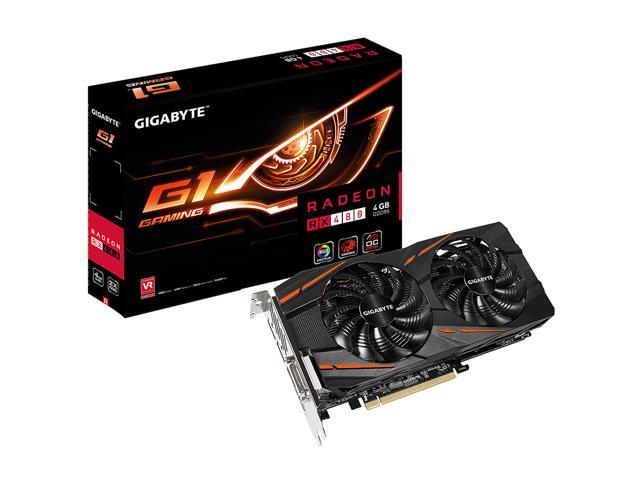 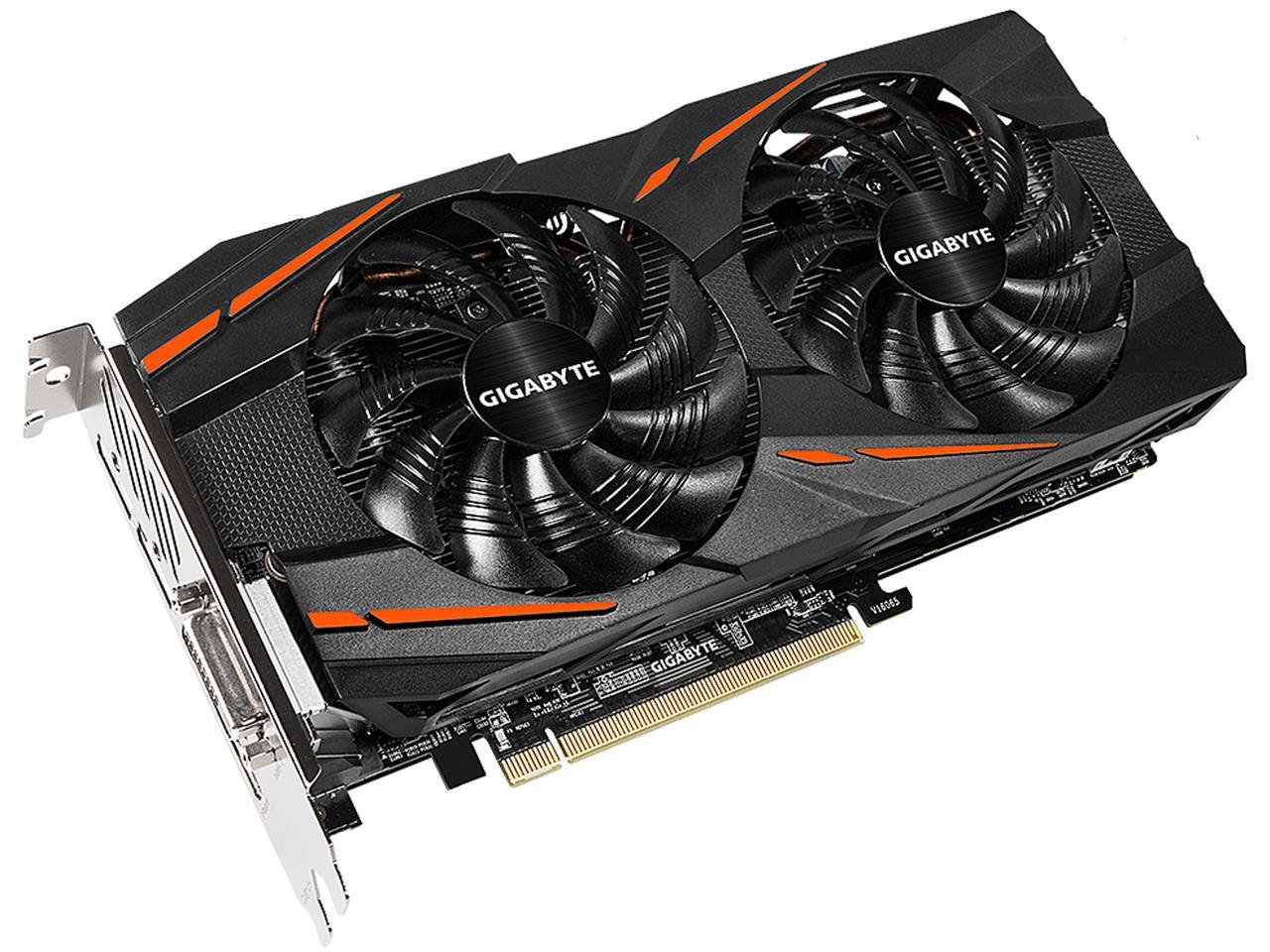 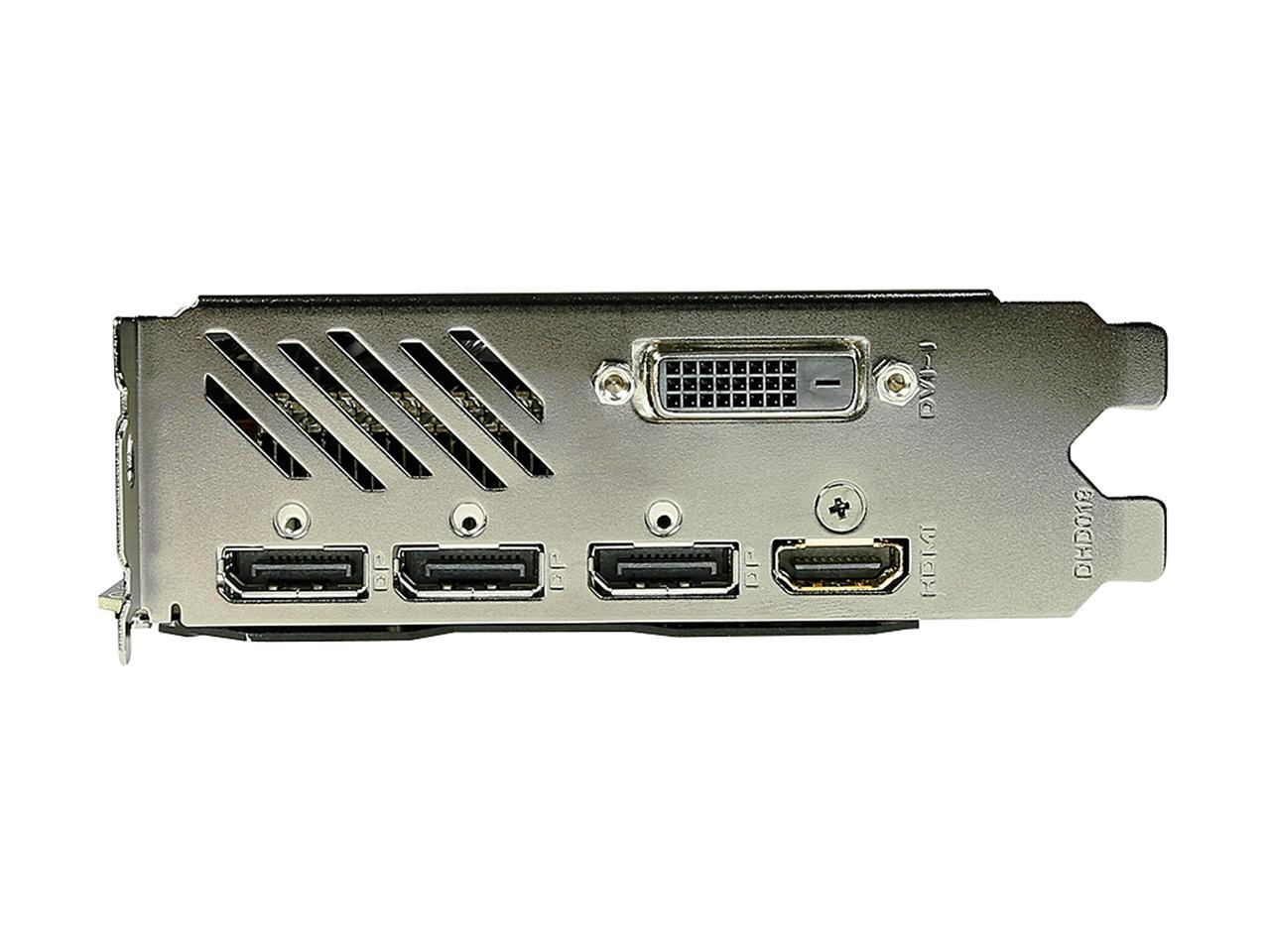 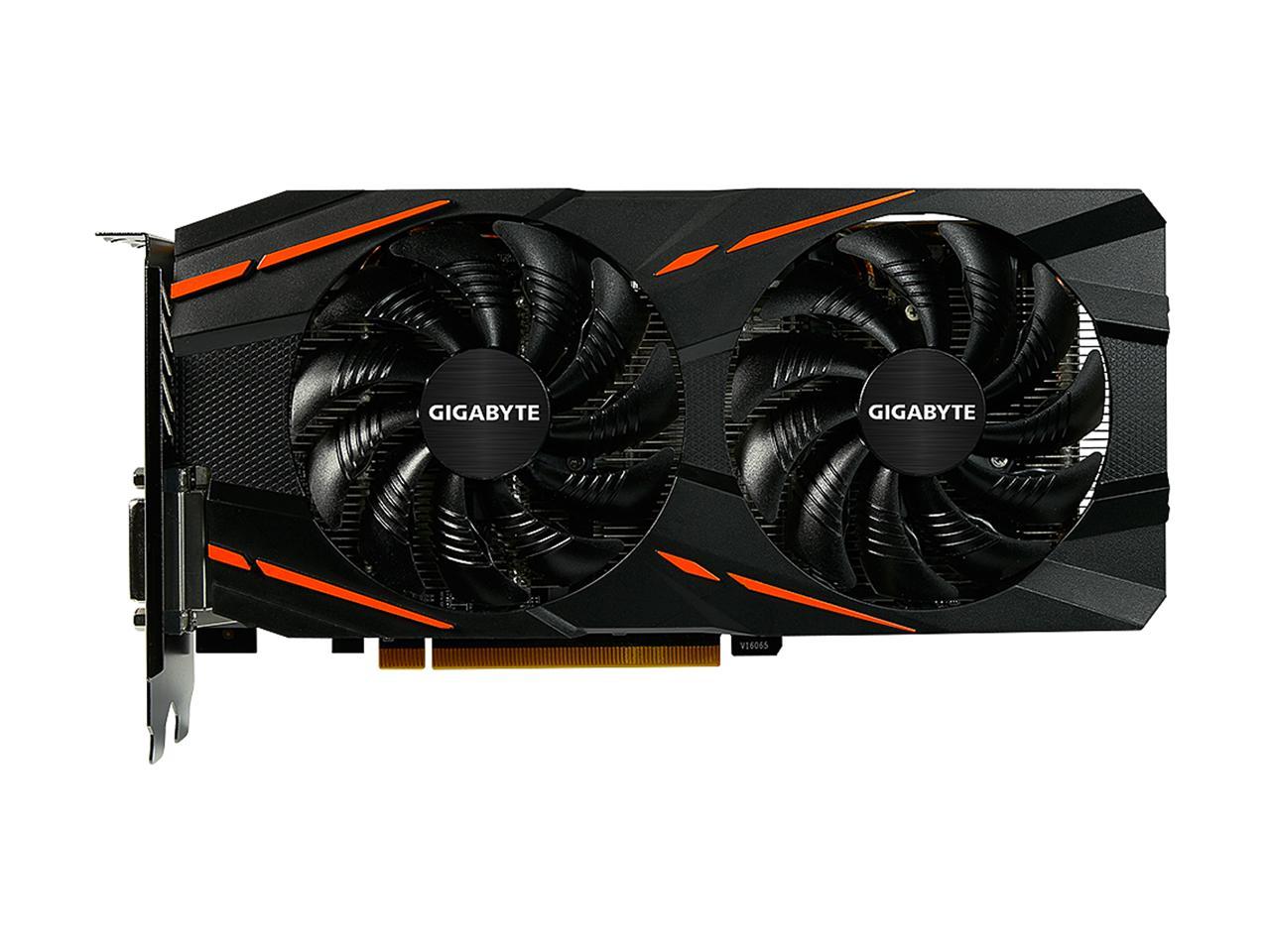 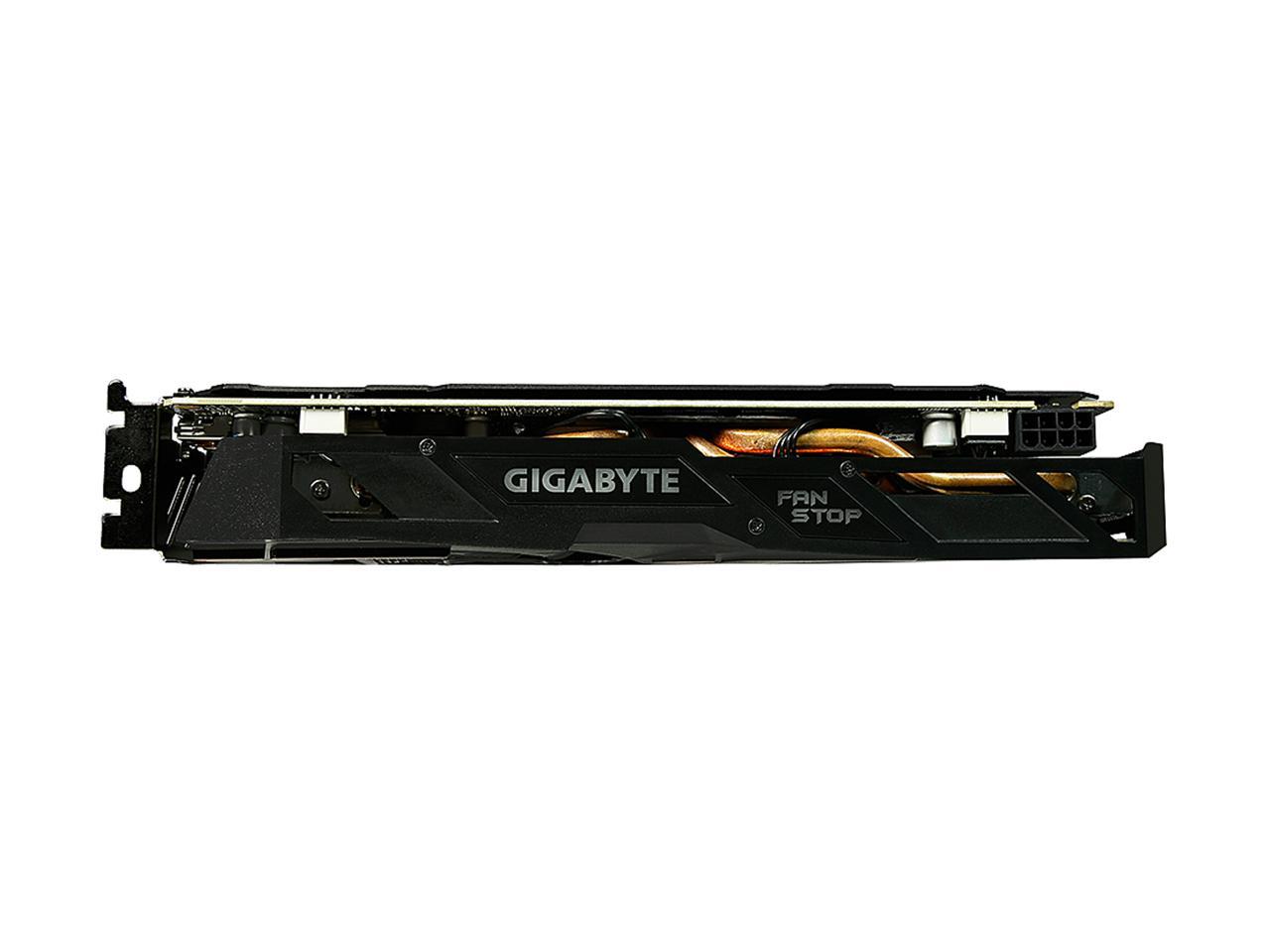 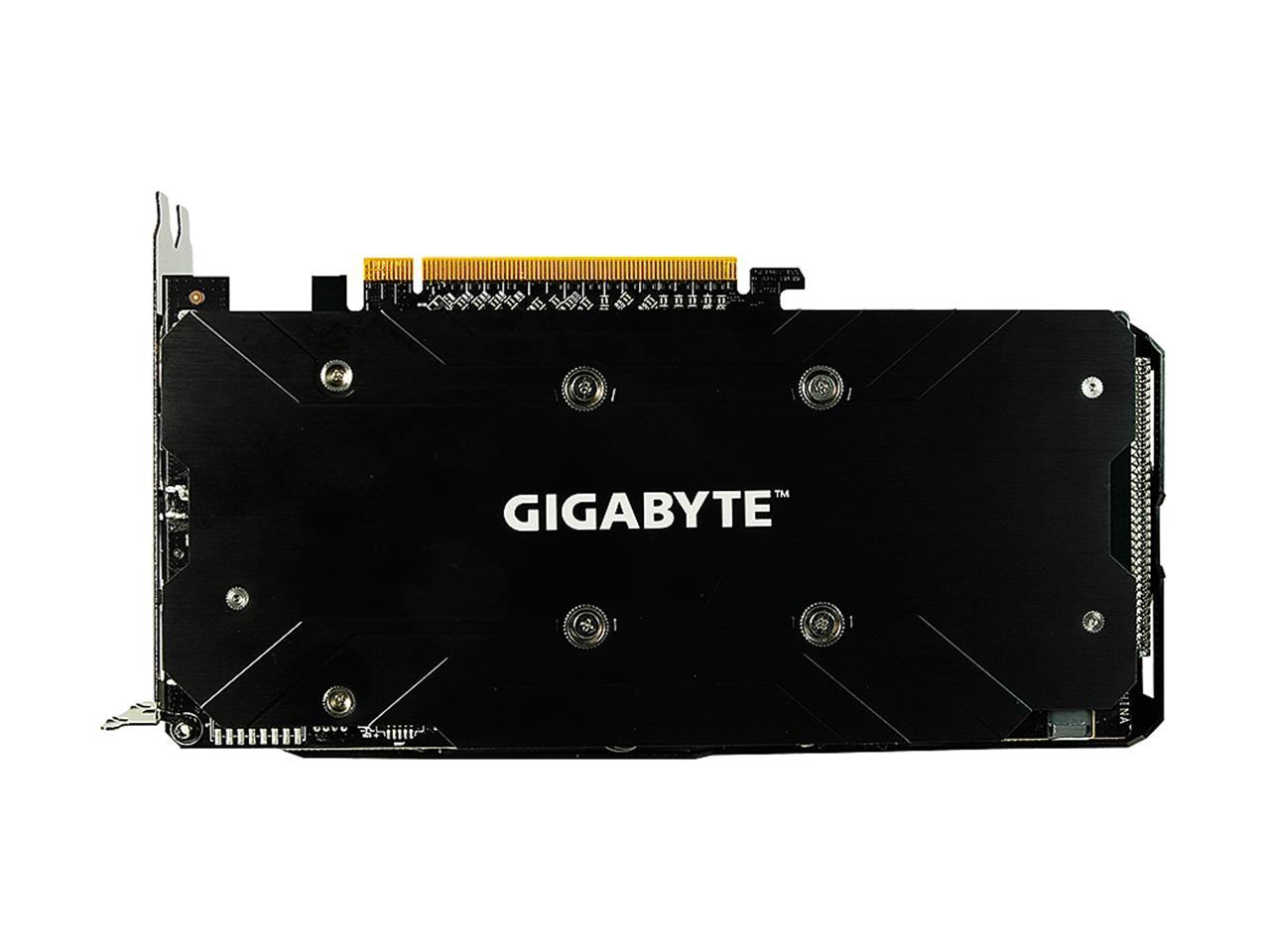 The semi-passive fans will remain off when the GPU is under a set loading or temperature for low power gaming. The LED fan indicator on the top of the graphics card provides an instant display of the fan status. With 16.8M customizable color options and numerous lighting effects, you could now choose the right scheme for your gaming rig through XTREME Engine utility. Smoothly cycles through all colors Choose a color to fade in and out Choose a color for flash effect

Choose a color for static light Compared to reference design, the 6+2 power phases on the card make the MOSFET working at a lower temperature and provide more stable voltage output.

Adjust clock speeds, voltage, fan performance, RGB lighting effect, power target can be monitored and tuned in real-time according to your own preference through this intuitive interface.

Learn more about the GIGABYTE GV-RX480G1GAMING-4GD

Cons: If it weren’t for how cheap I got this for, I’d dock an egg for the backplate not having ventilation holes. As for something nitpicky, I wish it were possible adjust the RGB lighting through Radeon Settings or some manual switch/dial on the card rather than download Gigabyte's extra piece of software. I haven't bothered testing it, but I'm afraid the utility might reset my wattman OC.

Overall Review: Keep in mind that (at the time of this review) this model’s BIOS is the same one advertised on the product support page for the GV-RX580GAMING-4GD. It's probably the same card, and you can achieve its boost clock with approximately the same frequency/power settings I stated above. If these are priced the same at any given moment, though, you should probably just get the 580, especially if you don't want to mess with wattman.

Trace C.
Ownership: 1 week to 1 month
Verified Owner
Very happy with this card. Installed effortlessly and has worked flawlessly.12/27/2016 9:17:56 AM

Pros: -Runs all of my games on high or ultra with great frame rates. -Temps stay reasonable. It has not been above 60 degrees at any time since installing it in my system. -Looks great!

Cons: -The only con I have so far is that it requires and 8 pin power connector, which I did not have with my power supply. I was forced to order and adapter for it.

Pros: My first card to have a "Fan off" mode. If you're not gaming, the fan just doesn't turn on. Aesthetics are nice, and not gaudy. RGB lighting on it is 'alright', and can be turned off. Set the color you like (or turn it off) and never mess with the 'Gigabyte gaming' software again. The software is fine, but not necessary once you set the color. Mine overclocked like a champ. 1400 core, 2200 memory, 74c max temperature (after sitting in Superposition for a few hours). Fan was noticeable, but not screaming or anything. I left voltages at Auto. All of this done in Wattman, naturally. (Currently on 19.4.2, but the same testing was done about a year ago.) Almost forgot to mention, power limit was just cranked to 50%. Fan at 100% (3600 RPM) sounds like a small vacuum. 50% is a soft hum. The default fan-curve worked fine for me. Under synthetic load, fan hit around 65%. Noticeable, but not annoying to me. I get idles at 33-35c, with the fan off. Not exclusive to this card, but rather just a + from AMD, is Radeon Chill. Though it doesn't work in every game, I absolutely love this feature. It can be toggled with a keypress, which I often do. If I'm sitting at a menu, waiting for a match or something, I just tap my key and my GPU gets to cool down a little. PUBG in it's prime, was a perfect example of when I used this feature most.

Cons: Aside from a few rare crashes, which is bound to happen to everyone at some point (in my experience), the most frustrating thing about this card is the inaccurate readings from any software. In Wattman, or anything else, the "Activity" or "Usage" just spikes around from 0% to 100%. Sometimes it hits 70% or other seemingly random numbers. It claims 100%, then 0%, while in games. Obviously this isn't a huge deal, but I'm a sucker for statistics. I want to know how hard my card is working on this game or that. I have no idea why it does this. I've tried several different driver versions, and even three different clean installs of Windows 10, at different times. Again, I almost forgot something. The "Fan stop" LEDs on the GPU itself. It's annoying. I wish I could turn off those LEDs, but keep the "GIGABYTE" ones on. Sadly, that doesn't seem to be something I can do, while keeping the fan off. Something not exclusive to this card, but rather Radeon Settings, is the "Game Explorer", which tries to read all the games you have. But it finds things that aren't games, such as Gigabyte's "EXTREME GAMING SOFTWARE" or whatever it's called. Just a minor nuisance.

Pros: Great bang for buck Outperforms nvidia counterparts Entry level 1440p card and runs anything 1080 no sweat Ultra on even the most demanding titles

Cons: Can get pretty hot Under load can be noisy It’s a big card

Overall Review: I think if you want a console killer card this does it, and affordably. It bottlenecks easy if your cpu is weak anything fx 8350 is way too weak but that’s not saying much with the new ryzen so it’s a great card

Cons: - Orange does not match a lot of builds.

Overall Review: I am currently using this in my living room. It does a great job at playing any game i threw at it at 60fps, and it is very quite, my case fans are louder than it is even while gaming. If your looking for a budget Card that will do 1080p and some 1440p this card will get the job done.

Cons: I can't figure out why this thing causes my machine to just shut down when it's under any kind of load except that it overheats. I thought maybe it was the PSU (650W) not being able to keep up with the extra load of the fans, but I've upgraded to 1000W PSU and it still crashes.

Manufacturer Response:
Dear Customer, Thank you for your comments. We apologize for your difficulty with your GIGABYTE product. Please contact us at support-newegg@gigabyteusa.com with the case number 143674 in the e-mail subject line. We will provide personalized service and analysis to help solve your issue ASAP. If the matter is urgent, please send us your contact number, and we will contact you. GIGABYTE VIP Support Team
Sam W.
Ownership: 1 week to 1 month
Verified Owner
3/27/2017 5:52:26 PM

Pros: I have been loving this card! Upgraded from an r9 290x, Due to memory issues. SO far its been great same performance half the power use. Also runs way cooler than my r9 290x. Worth every penny!!

Pros: - It installed easily as any graphics card would and should. - Looks really nice, has some nice exterior marker lighting that says "Gigabyte" and tells you whether or not the fan is running.

Overall Review: I wouldn't recommend this on my worst enemy. I'm going to be RMA it back to Newegg for a replacement. I think I'll go back to NVidia and spend the extra hundred because quite frankly this is disgusting. My 6th computer build and it's the only one with and AMD card and issues RIGHT FROM THE START.

Manufacturer Response:
Dear Customer, Thank you for your comments. We apologize for your difficulty with your GIGABYTE product. Please contact us at newegg-support@gigabyteusa.com with the case number 138743 in the e-mail subject line. We will provide personalized service and analysis to help solve your issue ASAP. If the matter is urgent, please send us your contact number, and we will contact you. GIGABYTE VIP Support Team