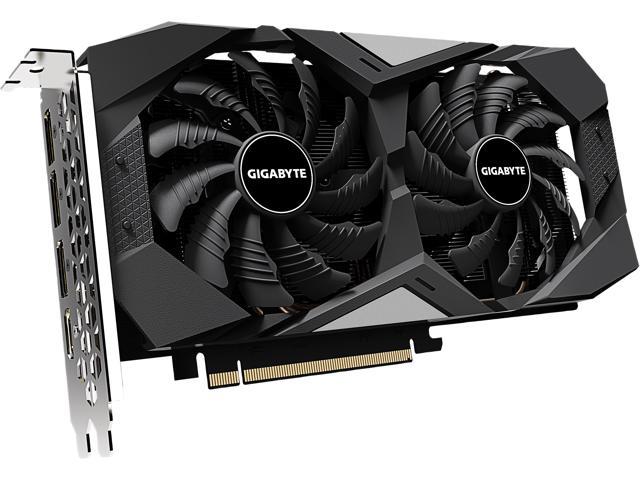 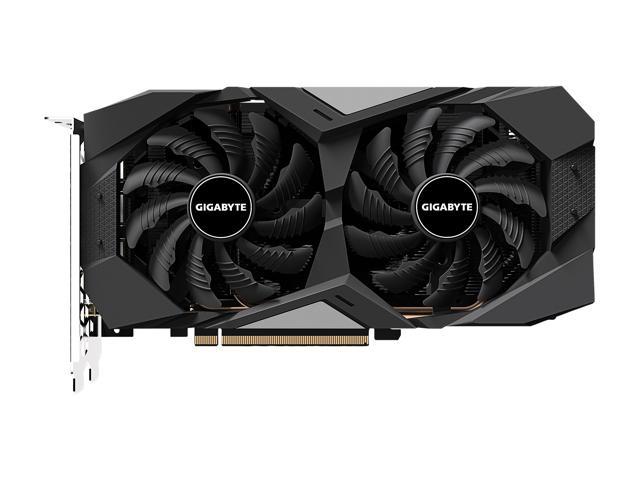 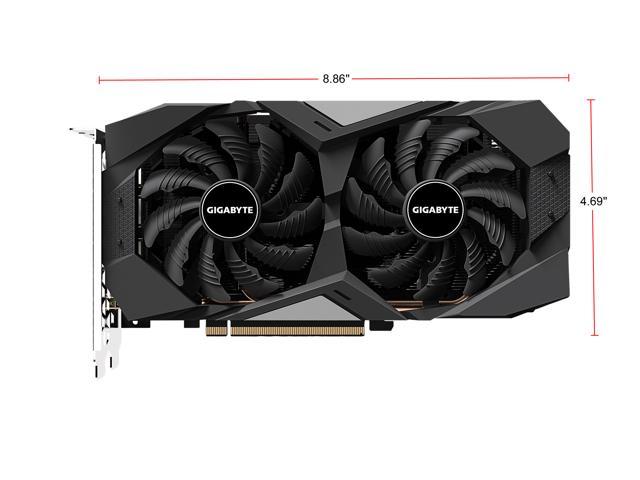 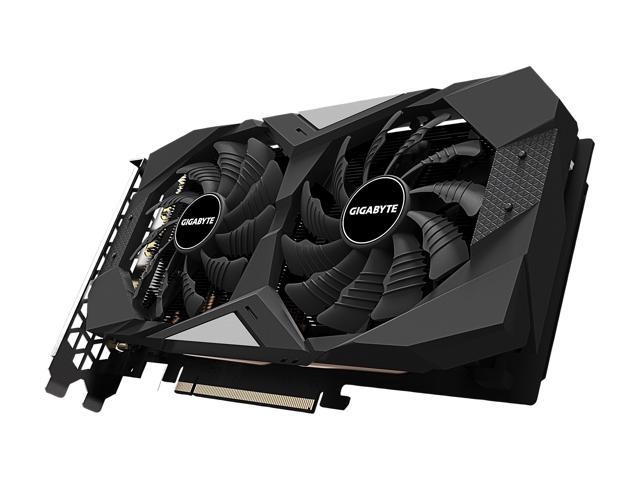 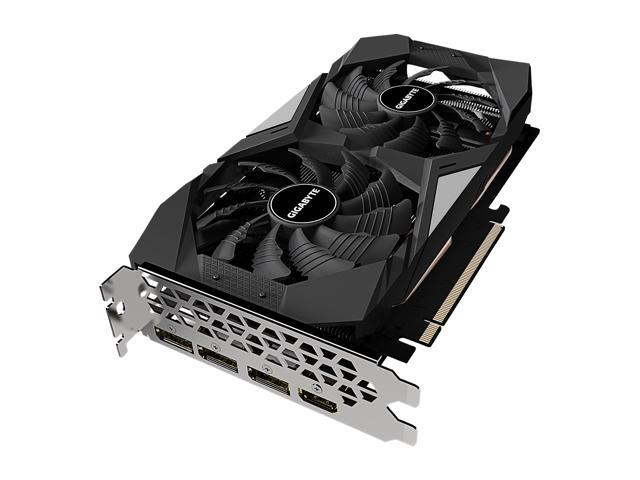 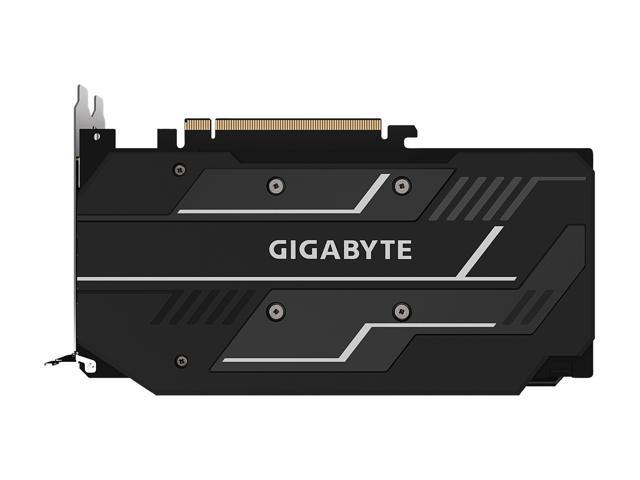 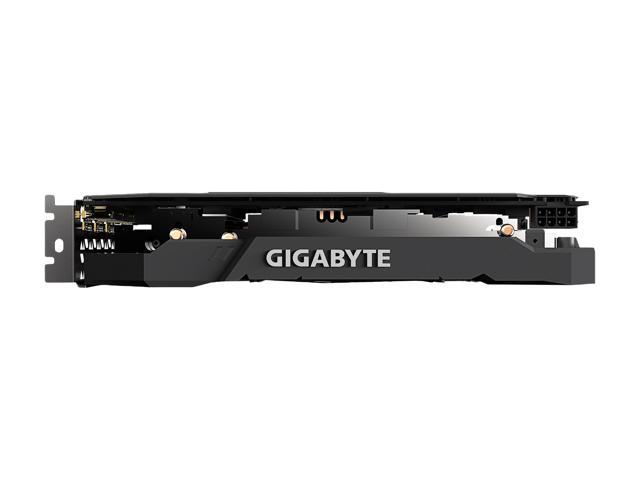 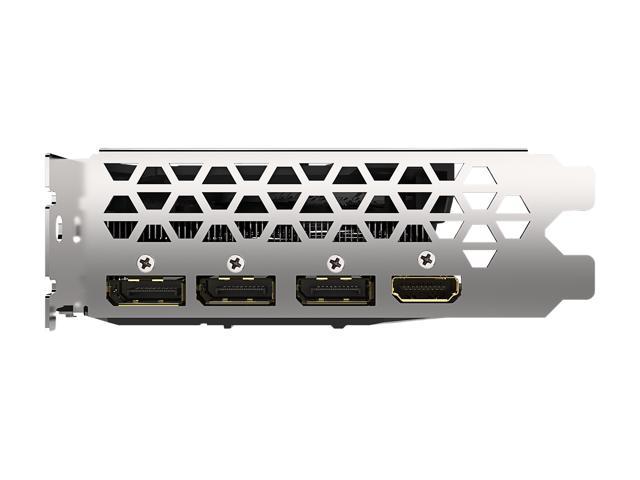 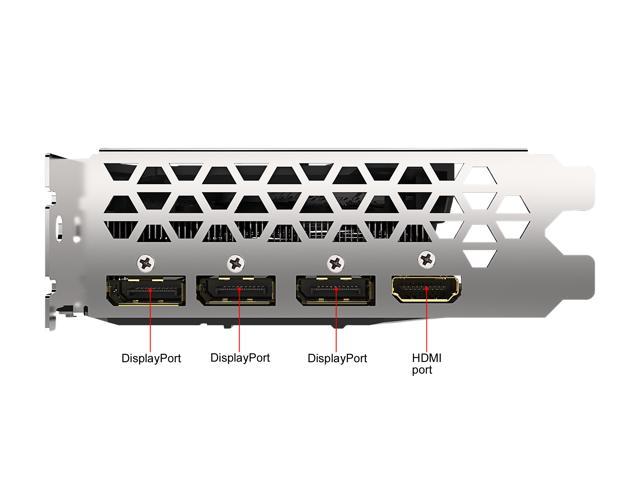 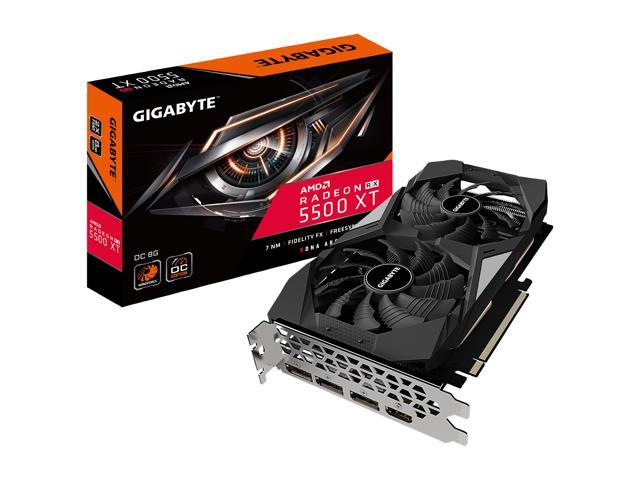 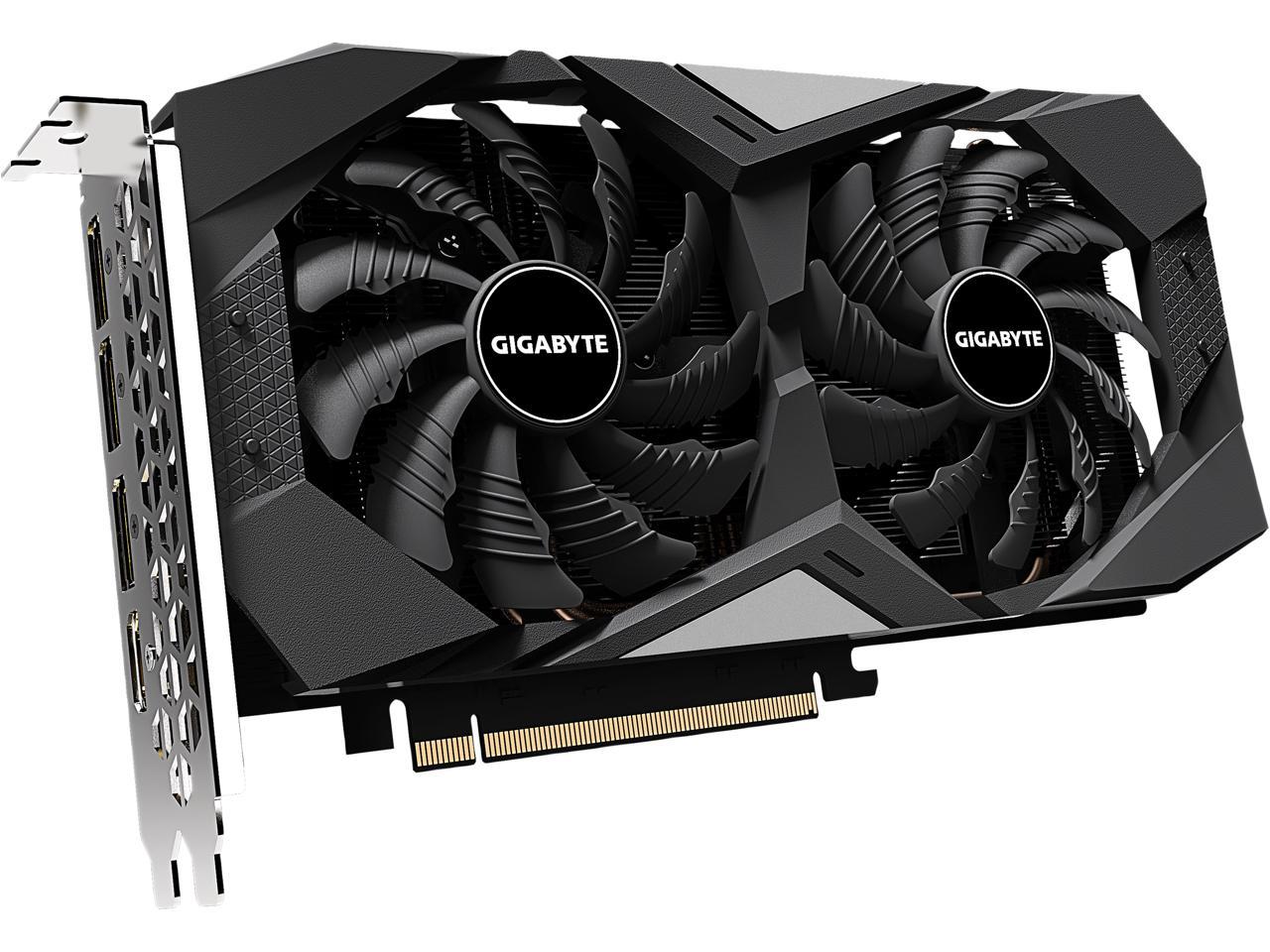 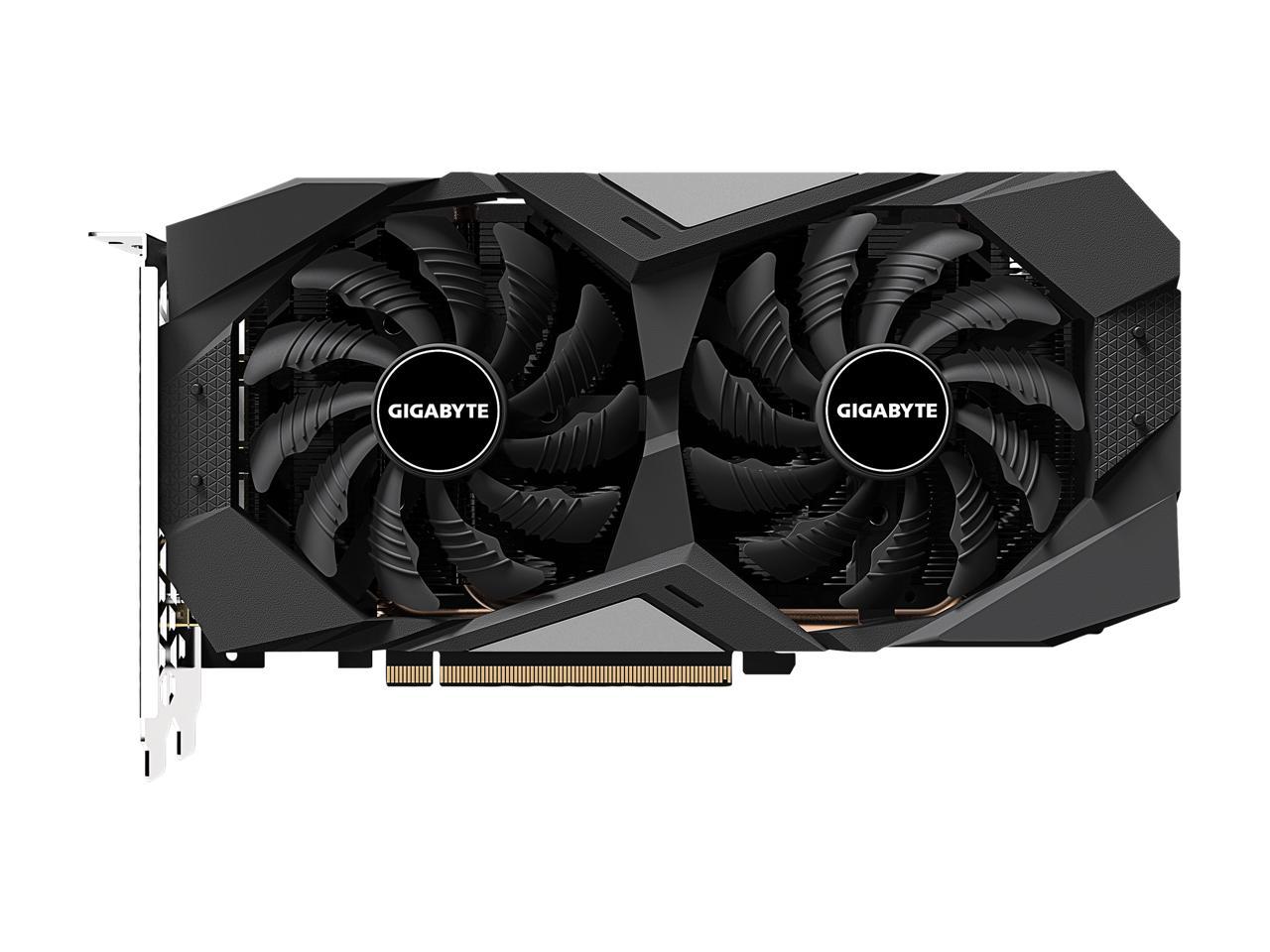 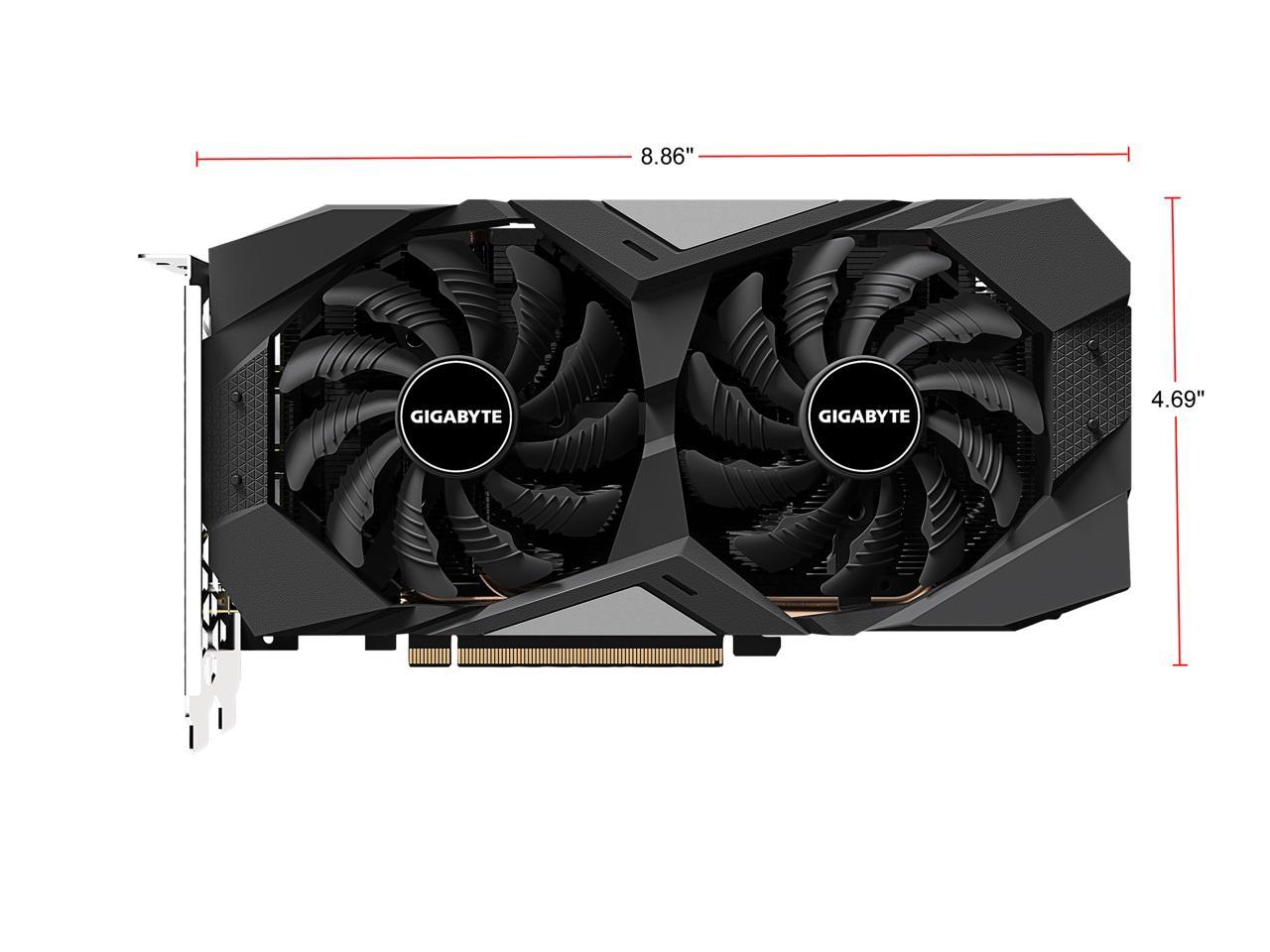 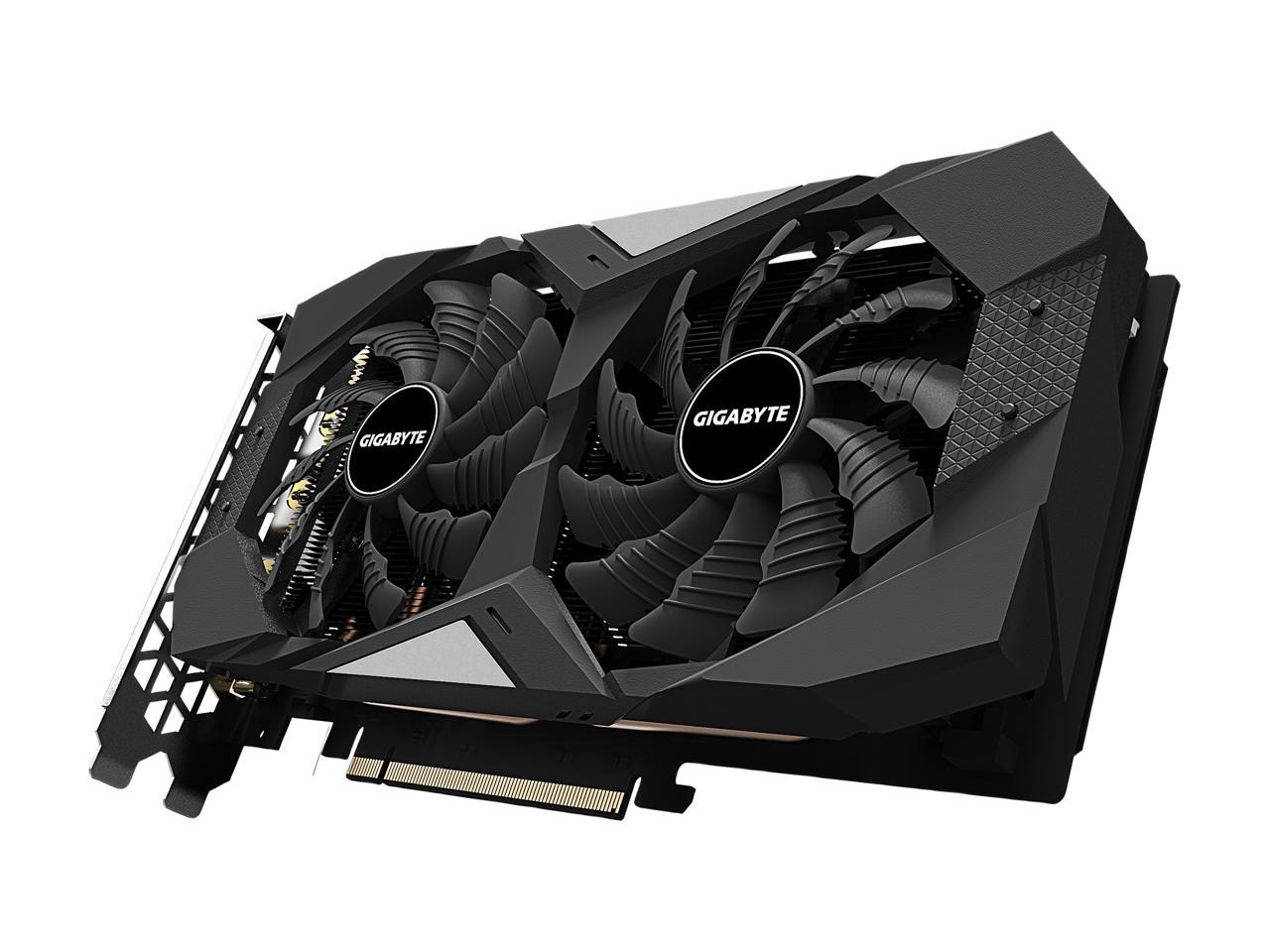 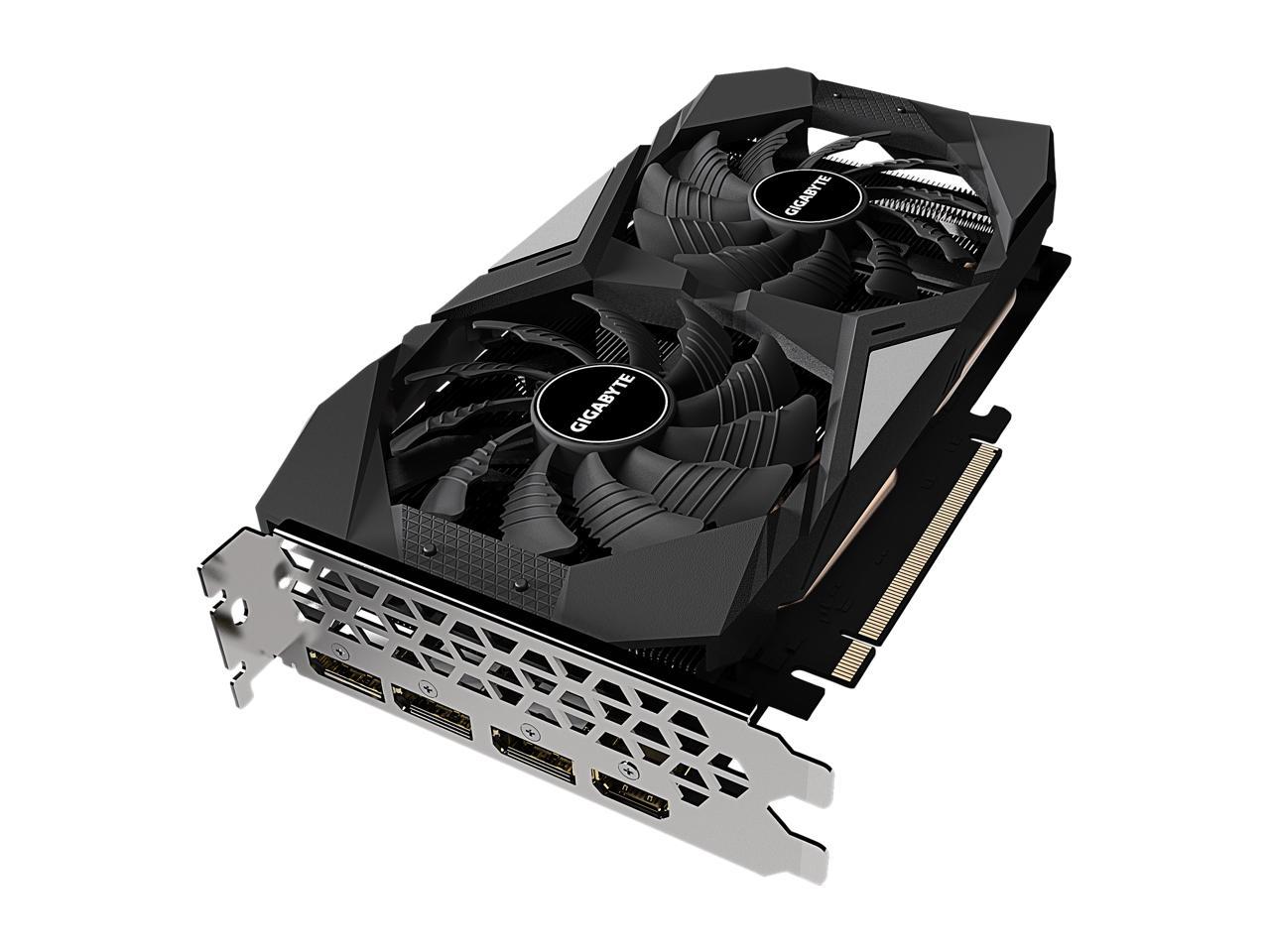 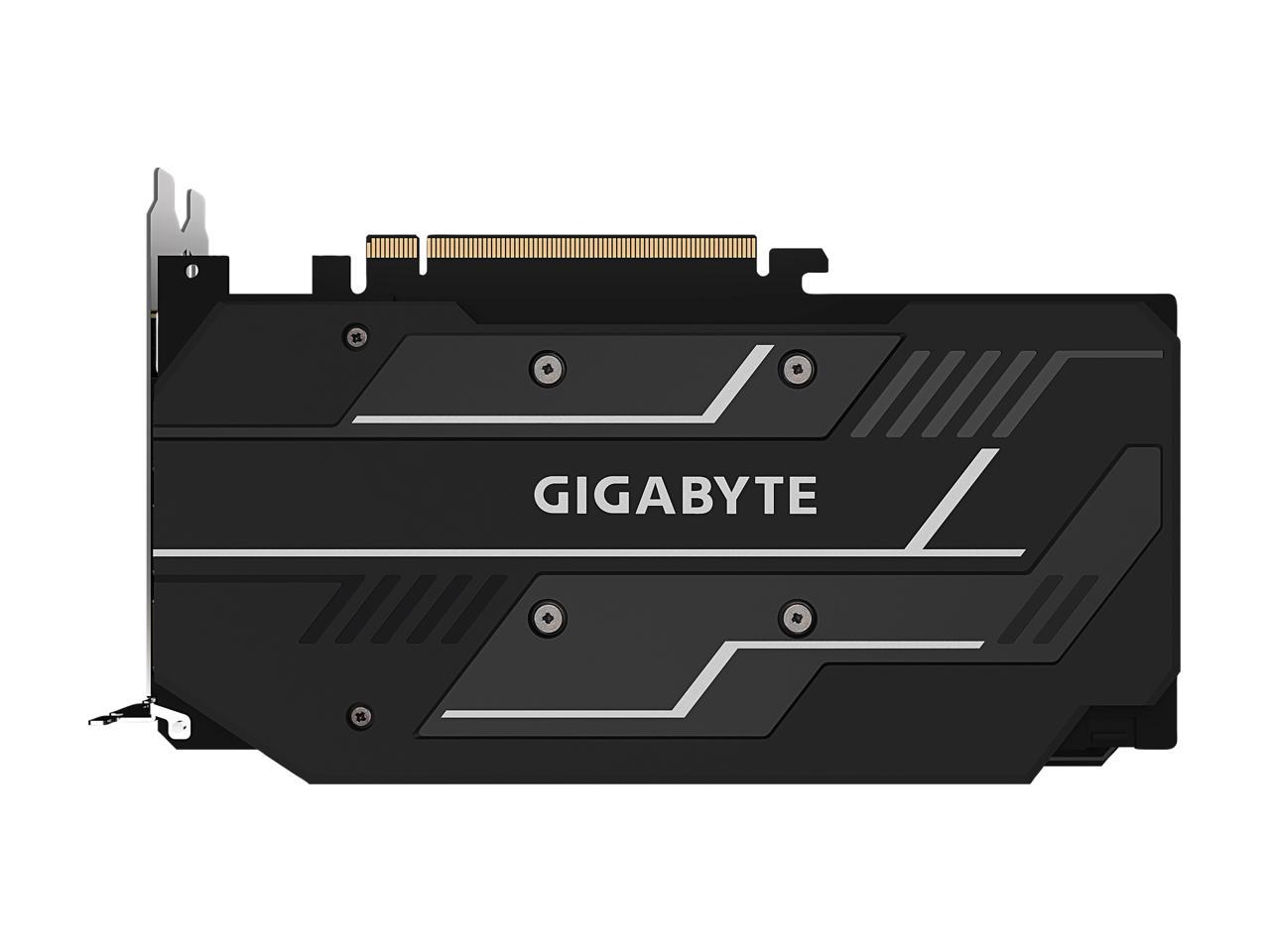 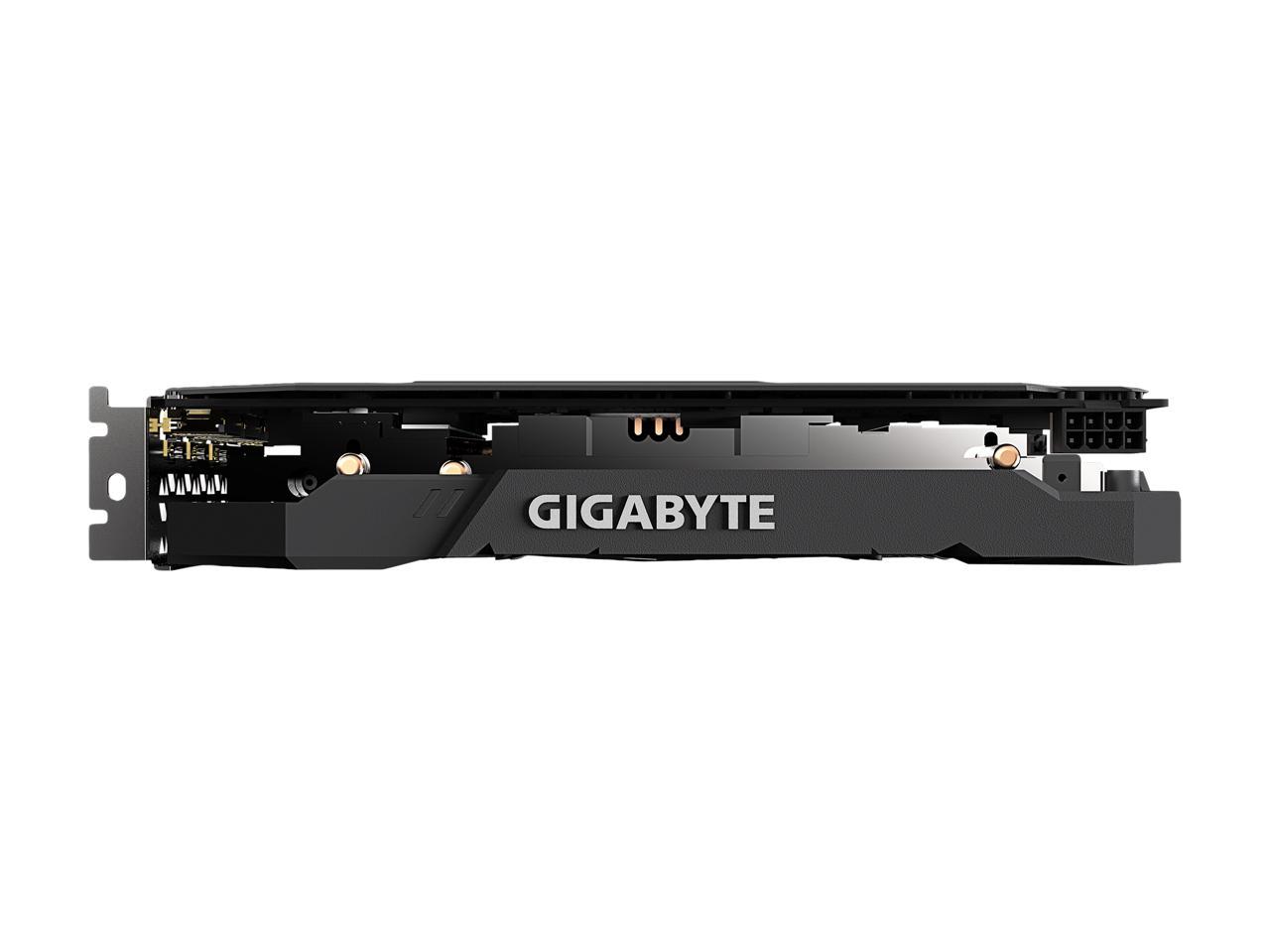 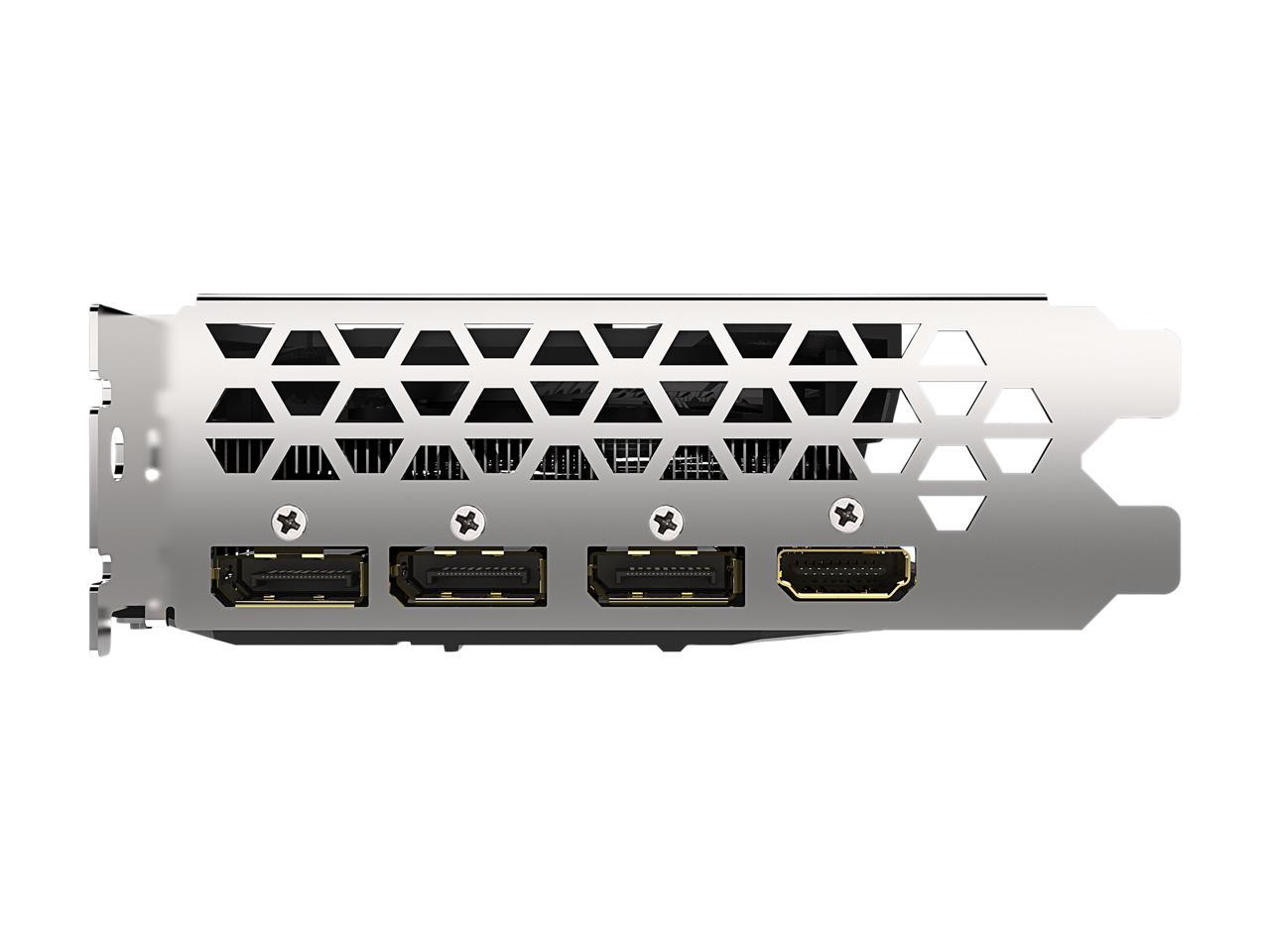 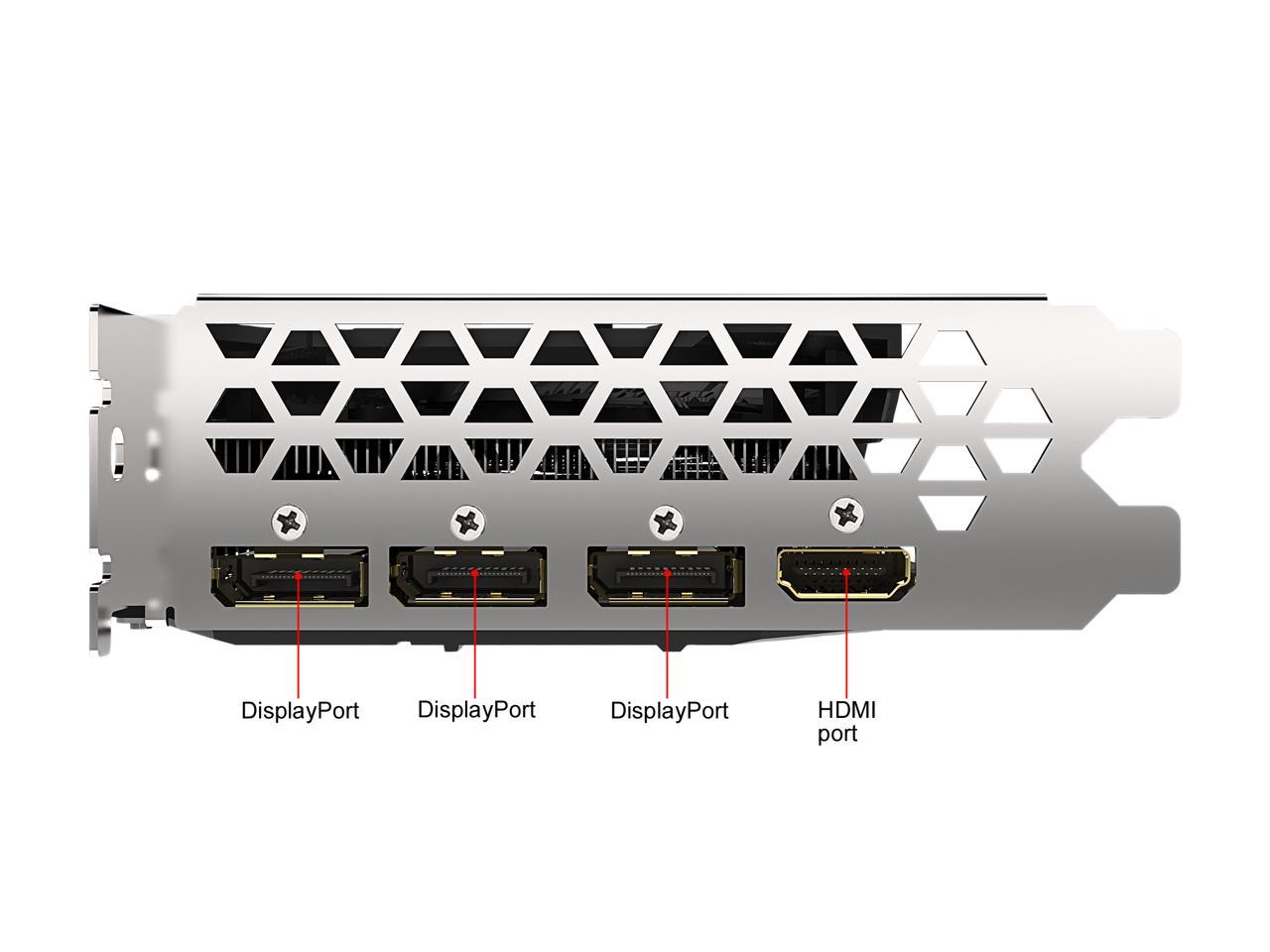 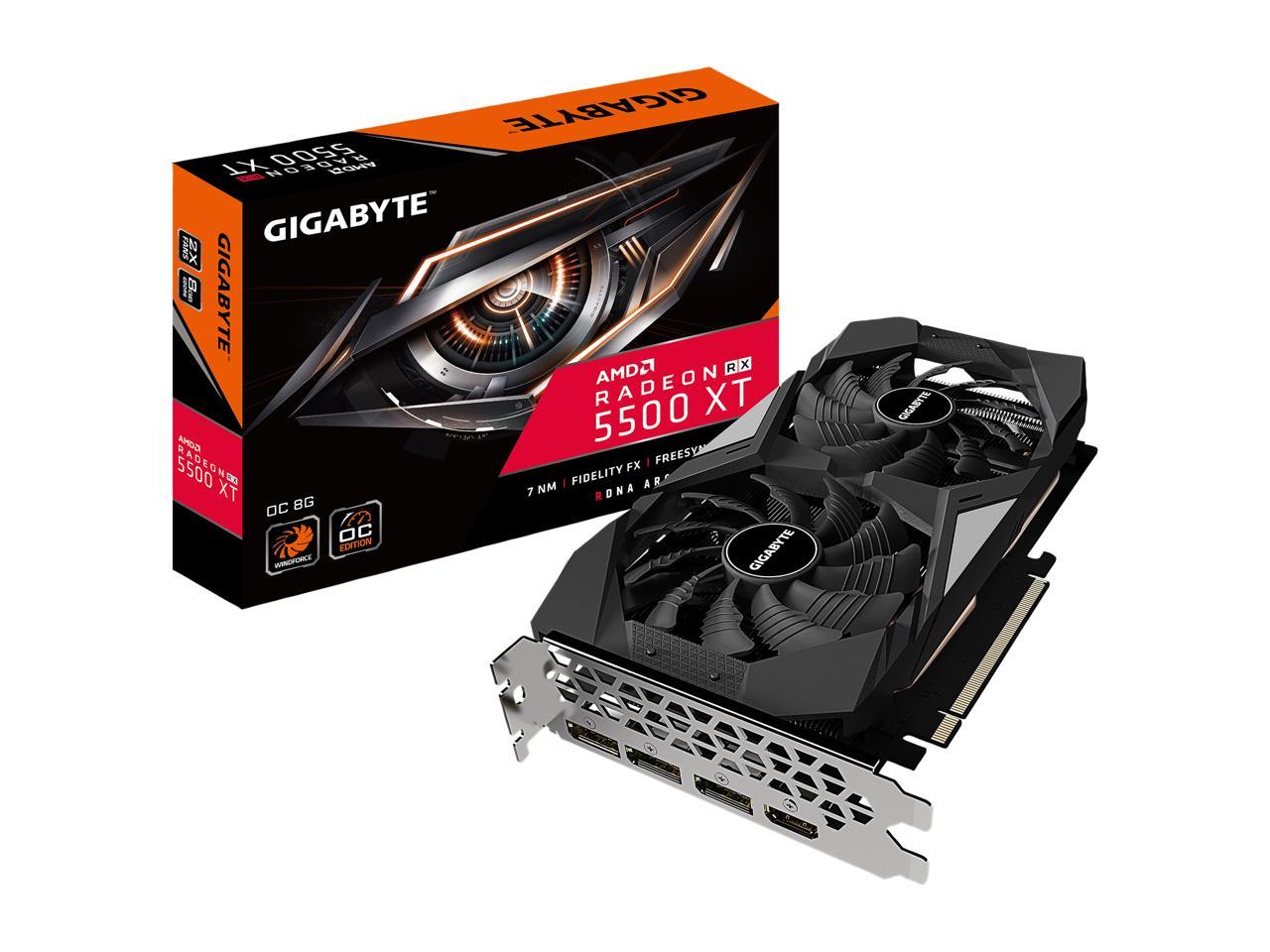 Take your gaming experience to the next level. Experience stutter-free, tear-free gaming with AMD Radeon FreeSync 1 and FreeSync 2 HDR2 technology, available on over 900 monitors.

Learn more about the GIGABYTE GV-R55XTOC-8GD

Pros: Good value for the money.

Pros: 1st I have had this for afew months now an have over clocked it to the extreme. Gpu clock 100% stable at 2125MHz and Memory clock 100% stable at 1985MHz Max Temps with fans locked at 60% speed never exceed 35C with room temp 21C This card clears 3Dmark TimeSpy with score of 7145 with only a 16% powerlimit increase I game on MSI 27" 4KUHD curved Monitor at 165Hz and this card holds Shadow of the Tomb Raider at ultra settings at minimal 149-152 FPS always

Cons: Getting the setting to work an or hold adjustment is very difficult the Profiles do not hold settings as set and have top be re-loaded after each restart of your pc to ensure actual settings set. Even with Driver updates an BIOS updates, If you get this card you have to set a Fan Curve setting because the card will stay at zero fan til its nearly melting then it runs the FAN speeds way too Hard

Pros: Easy an fast installation Its hitting the performance expectations Great card for the entry to intermediate level gamers

Cons: The only con I'm seeing so far is that there is no info in the packaging about how to install your drivers this is my first build an I had to rely your YouTube to make sure I was doing it right

Overall Review: Updated... I went through multiple settings all week after first installing. Had to reinstall windows 10 to remove all Nvidia traces. This improved multiple issues. After this, I went in the Radeon software and put limits on frame rates of my general display, it was unlimited so I set it down to 175 and voila... It&#39;s stable and has been all afternoon. Will have to update again next weekend. But man what a struggle to find a sweet spot for this piece of hardware. Again an update... What a piece of work... Drivers are horrible with Radeon Adrenaliine.. I finally had to just break the install and install drivers manually to get this card somewhat stable for my system. 20.1.3 is remotely stable. 20.2.2 doesn&#39;t work for me. Hoping this card gets better as it matures. Such a disappointment...

Pros: I have some universe games requiring over 32Gbs system ram to run the far reaches at the same time as what is around you now, games installs taking up over 300Gb of hard drive space in one game, and this video card performs admirably with the high definition, high quality games I have, loading huge things. Performace has been flawless until I caused an issue.

Cons: Fans stopped running, and I may have damaged it by the time I figured out it was partially my fault. A design flaw is what I am going to call the issue though. Because if the fans stop communicating with the software controler running it, it should absoulutely revert to automatic hardware control and keep running at some level of cooling, even if it wasn't the level I wanted... not turn off and stop running completely because the software crashed, or was intentionally closed. I have always closed things, or prevented things from running in the background. This habbit killed all motion in the fans, as I had set a higher custom level of cooling to the fans in the AMD Radeon Software. Getting it to not annoy me down by the clock with what was always perceived as an annoying add-on to the actual driver, is now apparently the actual driver or something. Never was in the past, seems to be new, perhaps when the company became AMD. I don't like the analytics the app has of how long or little I have played games, and some bonus features it tries to forcefully override a games settings often resulting in the game crashing... pretty much all of them get turned off because I don't want to figure out what is wrong one by one. That issue is not this card though, just AMD... like all their cards. After it started having fan issues, it had driver crashes all the time. After a few unknown random crashes, AMD finally kicked back an error telling me it was overheating. Cudos for getting that right. I rip open my case to see the fans in action, and they were not moving at all. After a bit of trial and error troubleshooting I finally figured out the Tray Icon down by the clock had to be running. This may have been because of the custom settings that it only ran at all when the software was running, and there was some kind of message about software control, but it didn't seem like a warning. How hard is it to save custom settings to the hardware? Resetable if they go wrong... idk... seems doable to fix a fatal flaw, but possibly not without changing hardware up a bit... During many driver crashes in the over heating stage, the fans would again completly stop and make things worse. The settings would always reset in the crash, yet somehow still not reset to normal hardware control and some kind of default cooling. In the end high powered (overpowered) loud jet like "crypto mining" new case fans fixed the heating issue... possibly without the video card fans running at all, I don't know... haven't had errors since, guess I got lucky with tech able to detect such errors before serious issues became perminant. So, I may still have serious issues, but was able to fix or ignore them with case fans. Needing 60.00 of fans to fix something that shouldn't exist in the first place is an obvious negative in my opinion.

Overall Review: Always been an AMD fan. Absoulutely in love with the performance. Super small fan issue I ultimately caused, that turned into a big deal. Never stop AMD anything from running in the background and you will be just fine. It is something advanced users do and don't give much thought about because it was never like that in the past. I chose this model because it was the lowest and cheepest model of the new core in how they process video, think of it like a different operating system in the video hardware that has nothing to do with windows or whatever actual operating system you are running. As for this new core, and essentally "doing more with less" as they said, I would have to say I completely agree. I have set everything I have to ultimate settings, and used HD add-ons, etc. Performance is awesome, I can't actually imagine what the better cards with this new core even do. I am very pleased over all.

TheGrizzlyChef
Ownership: 1 month to 1 year
Verified Owner
Please do yourself a favor and save yourself a headache and hassle.6/11/2021 2:53:41 PM

Overall Review: Since I built my PC, this gpu has been causing my pc to crash constantly which as an up an coming content creator is so frustrating. The worst part is when I tried to RMA it gigabyte said the Serial Number wasn't from this region. So good luck trying to get your money back or ahold of the company they said to RMA it from.

Cons: Loud coil whine that requires a headset for a decent player experience.

Overall Review: The card is a solid quality besides the coil whine that starts yelling at me at 80% load and up. That could be just bad luck of the draw with my card.

Pros: - seemed like a good purchase at the time

Cons: - has crashed the entire time I've owned it

Overall Review: Don't buy this, I don't know anyone with a rx 5000 series that doesn't have issues. I had a radeon HD for around 7 years and I tried everything to get this card to work based off how effortless that card was and can't return it now...It crashes all the time...the only time it doesn't crash is when I uninstall the drivers and install the very first ones, yet the screen still goes black and I have to reload the page for videos in my browser. It's crashed 3 times in the last 4 hours, I've had to restart my pc each time...this was after I installed new drivers thinking "oh maybe they have sorted it out..." nah... Screen flickers with the stupid radeon adrenaline screen capture poop, it's just...the drivers and adrenaline software are a hot pile of mess. If you like your PC crashing before you can save things because you're listening to a youtube video in the background THIS IS THE CARD FOR YOU! I've never had this much trouble with a pc component in my life, nothing comes close. I'll be looking to sell it ASAP when I afford an upgrade, for now...back to the first driver released I guess... I know it's tempting because of the price and maybe like me you had a really awesome radeon video card in the past...skip it, just skip it, don't do it, you'll never have stability and normalcy that you'd expect.

Manufacturer Response:
Dear Customer, Thank you for your comments. We apologize for your difficulty with your GIGABYTE product. Please contact GIGABYTE RMA department for further assistance about graphic card service by phone at 1-626-854-9338 opt. 4 Monday through Friday from 08:30 ~ 17:30 PST. GIGABYTE VIP Support Team