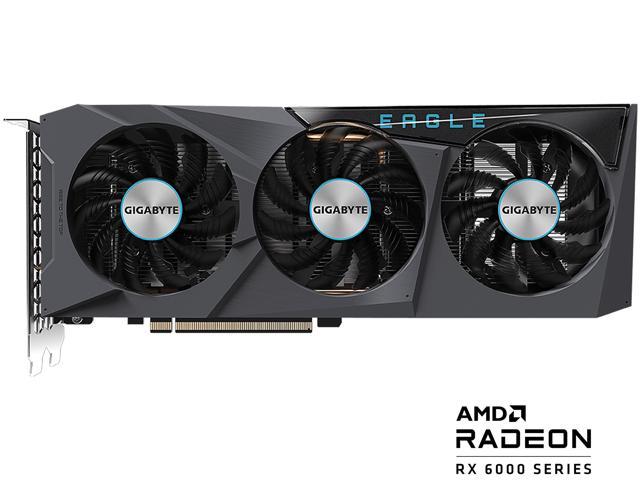 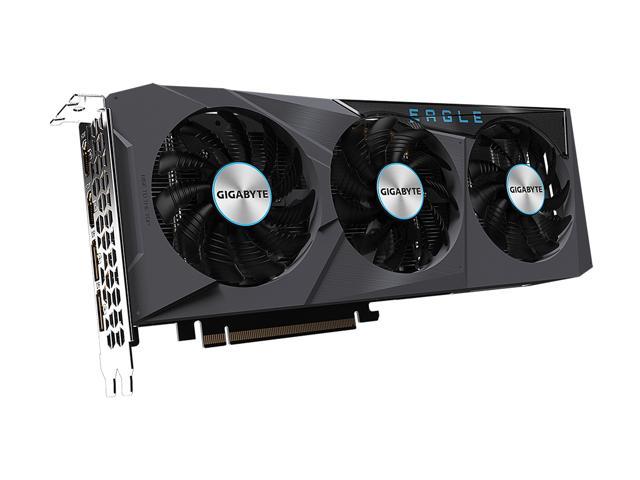 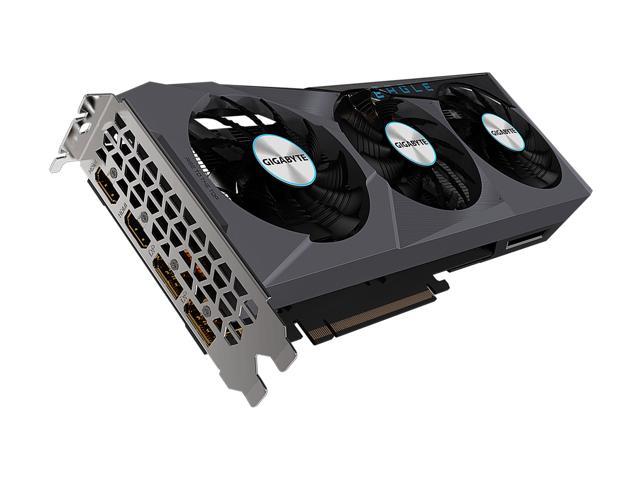 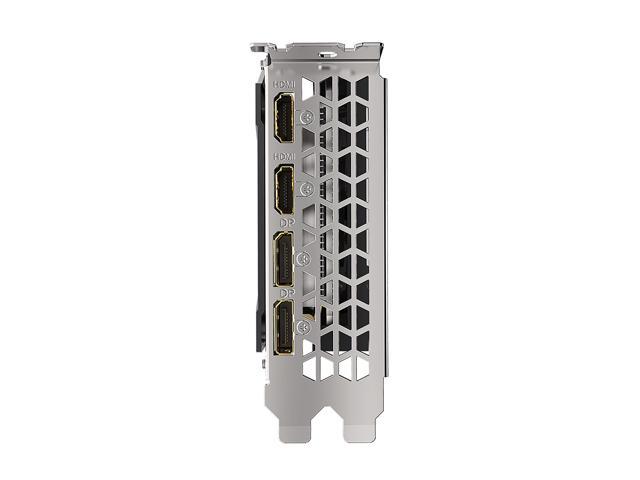 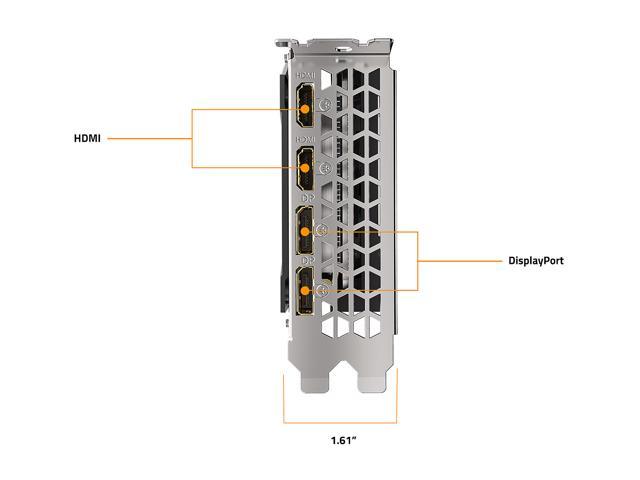 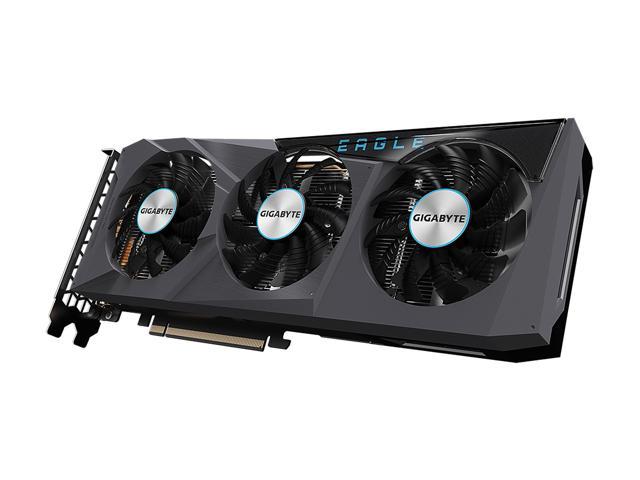 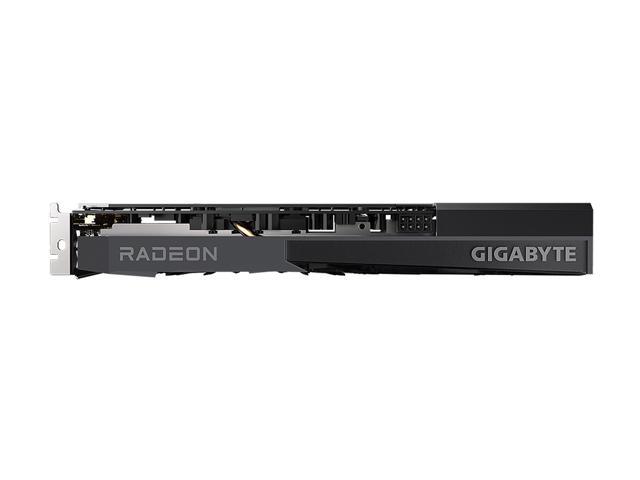 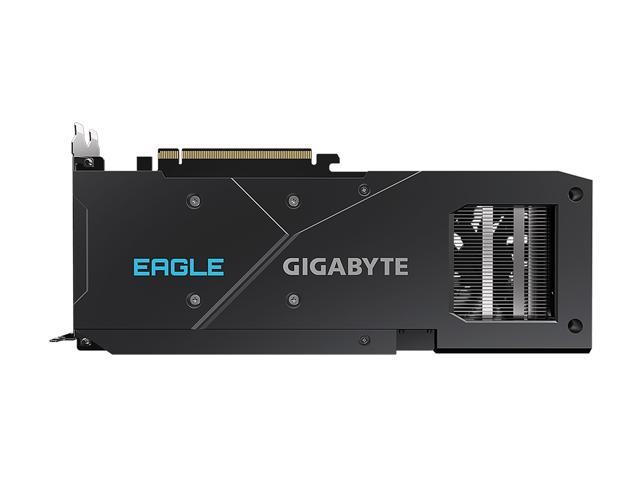 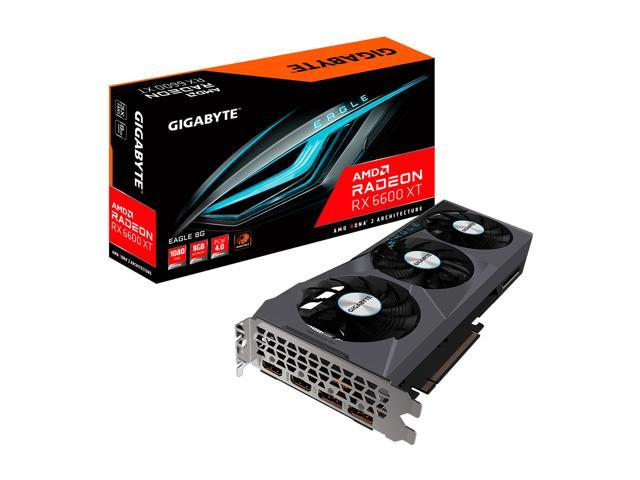 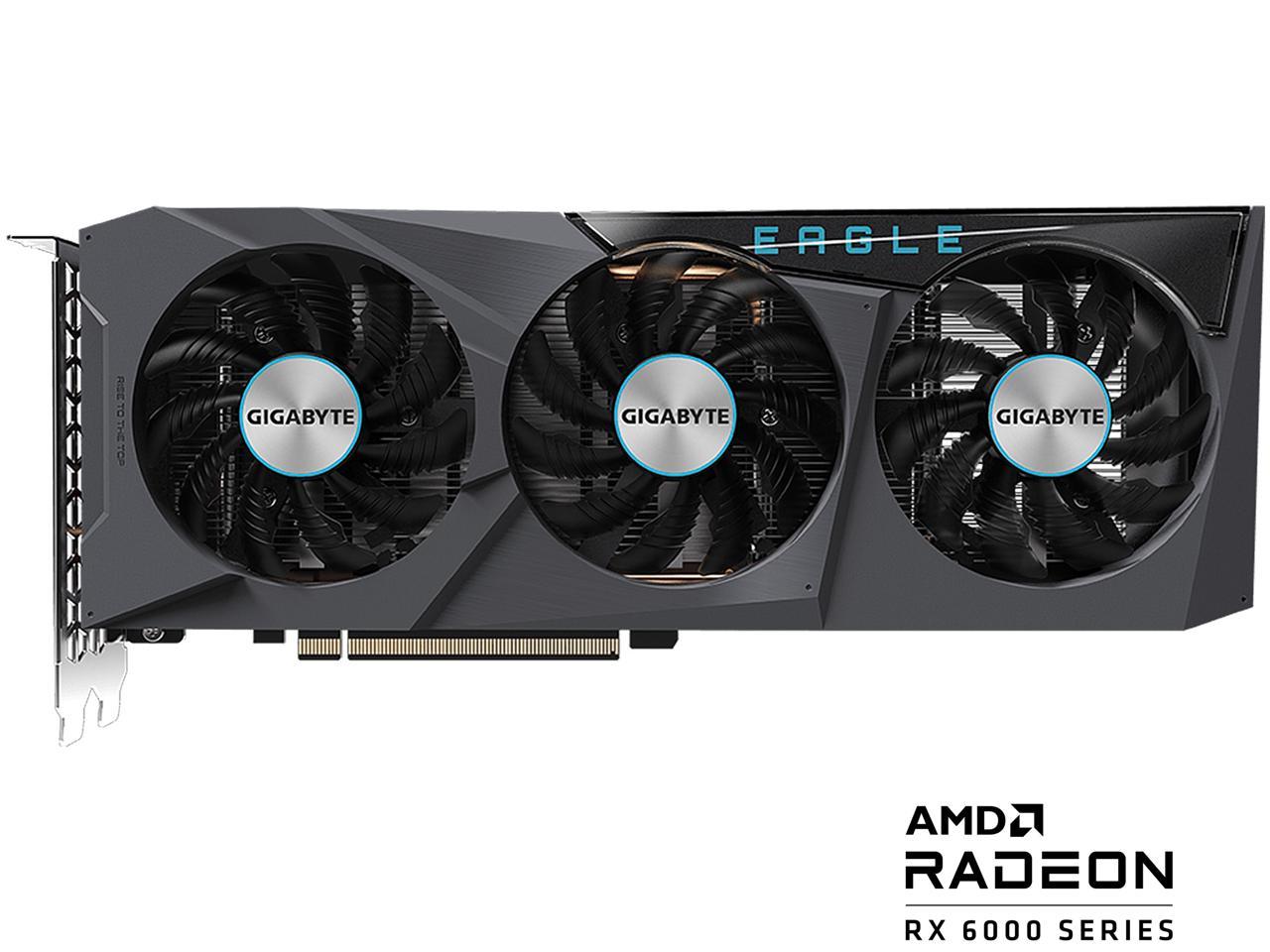 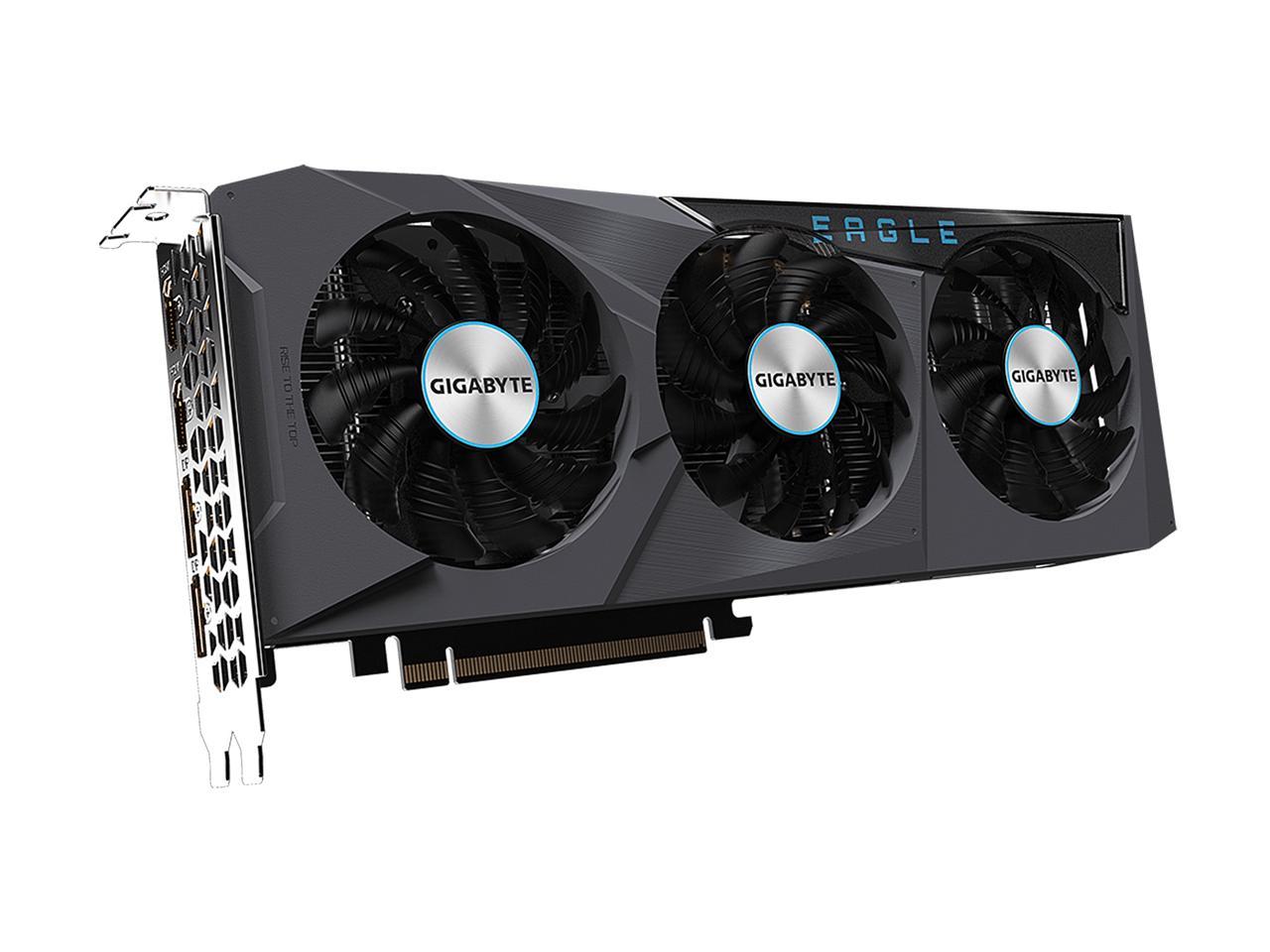 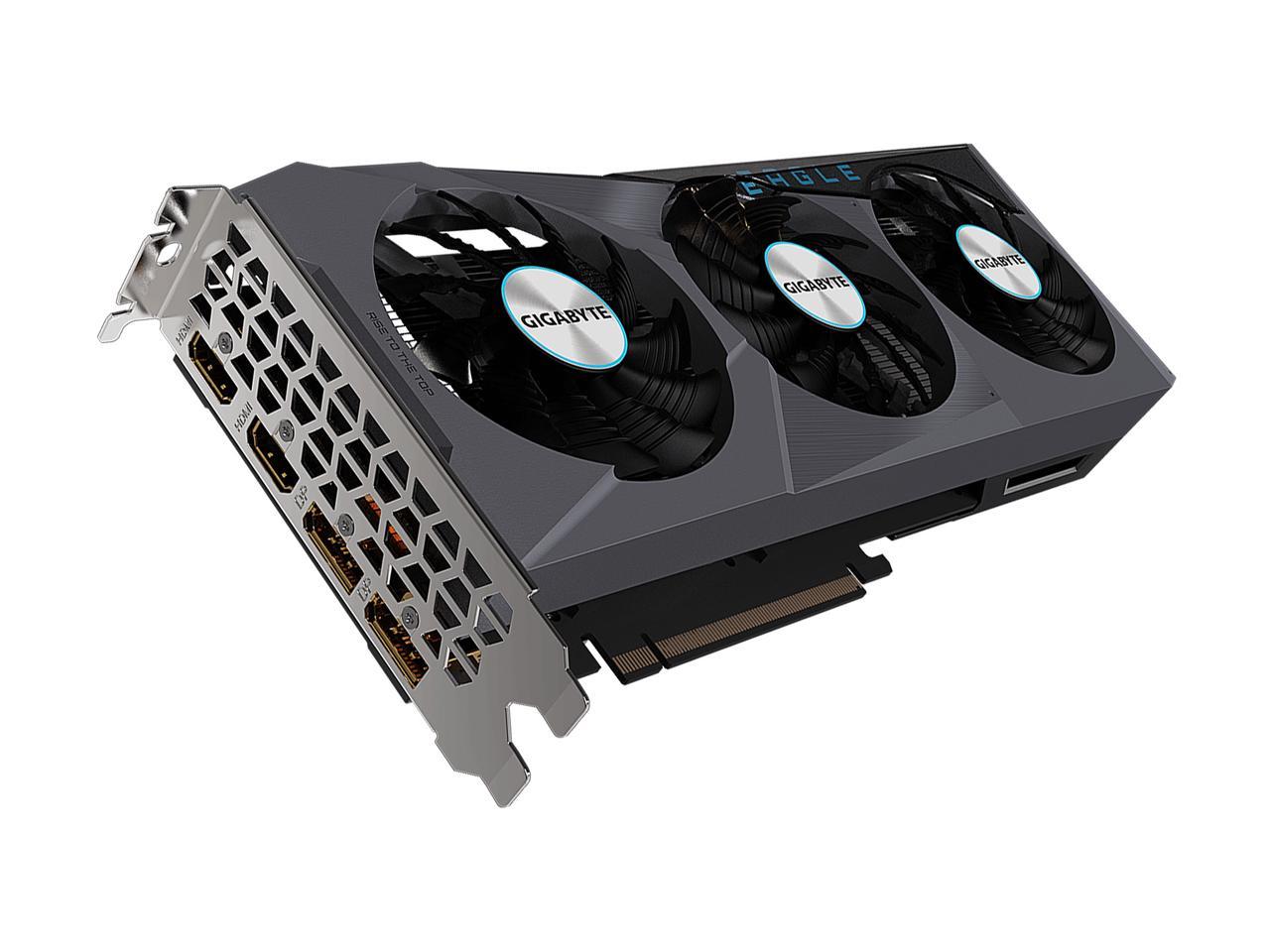 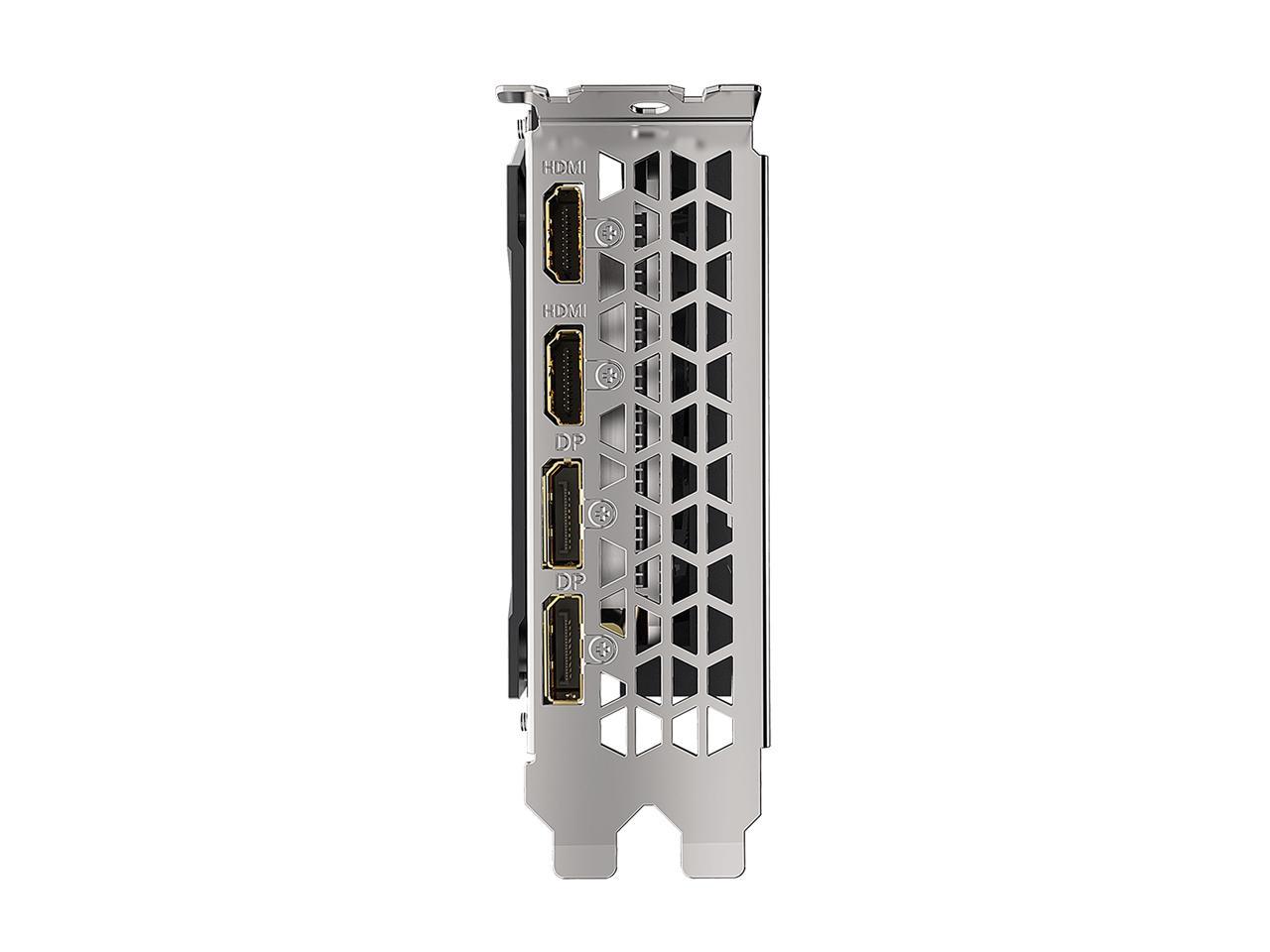 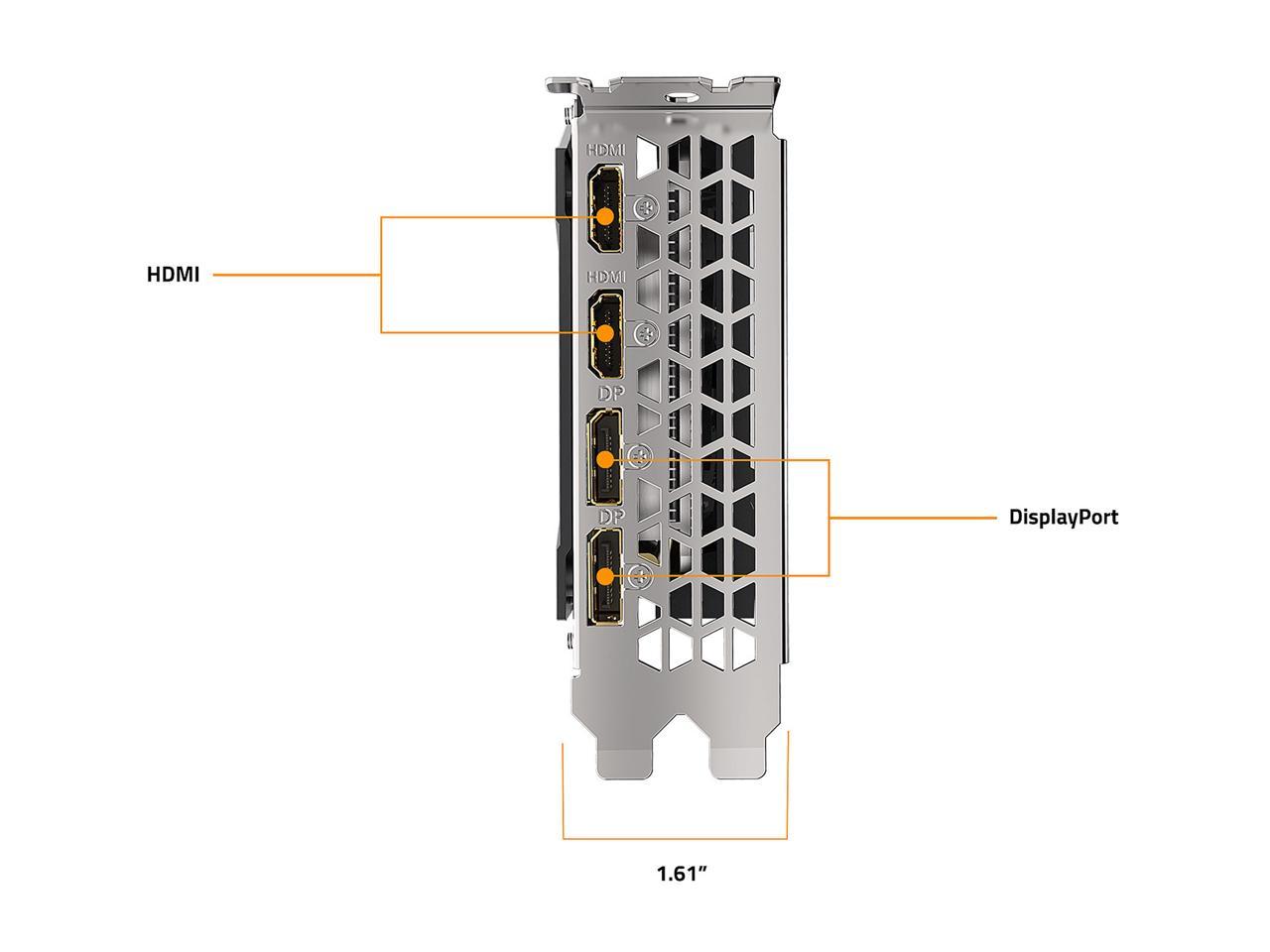 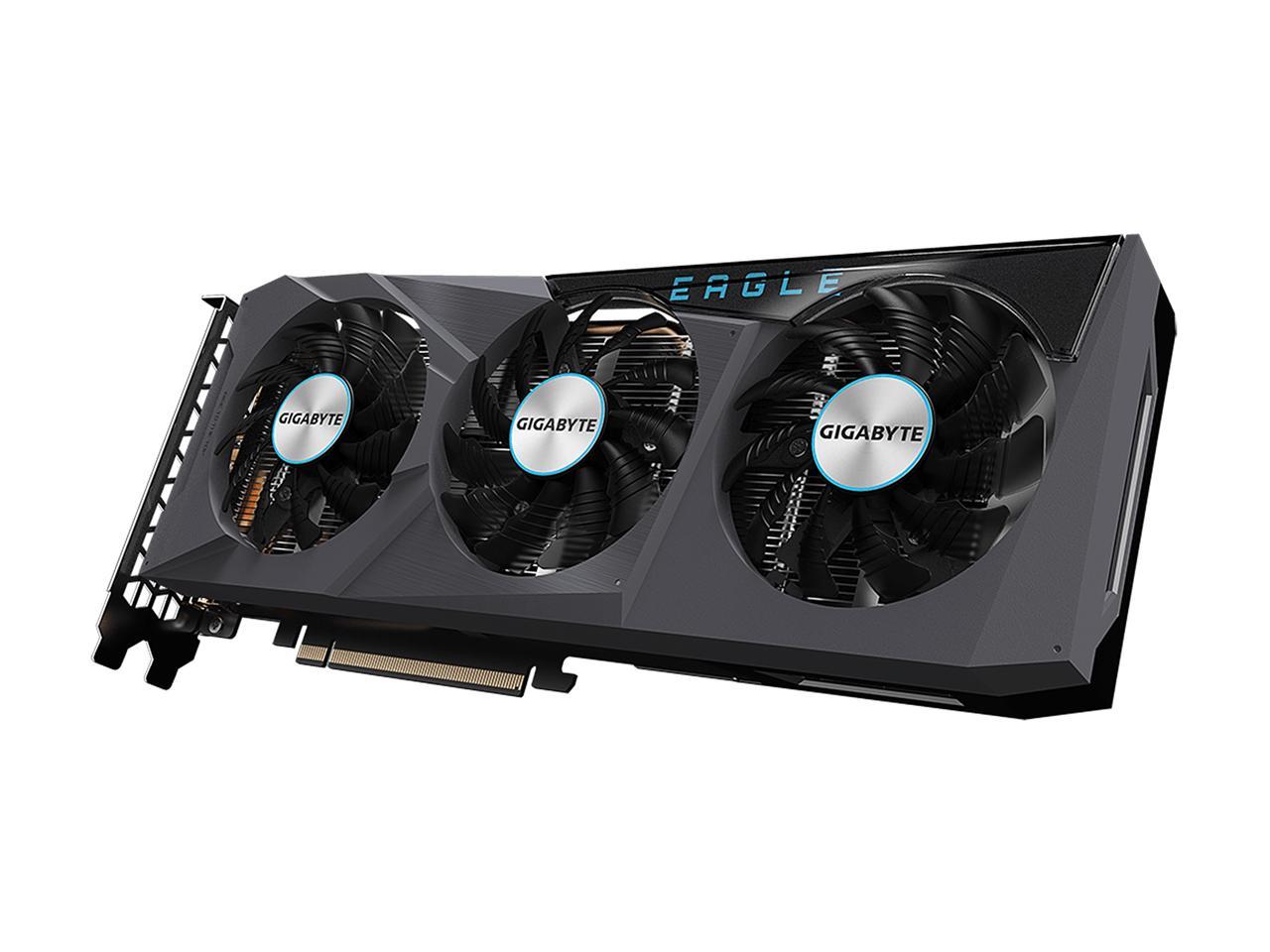 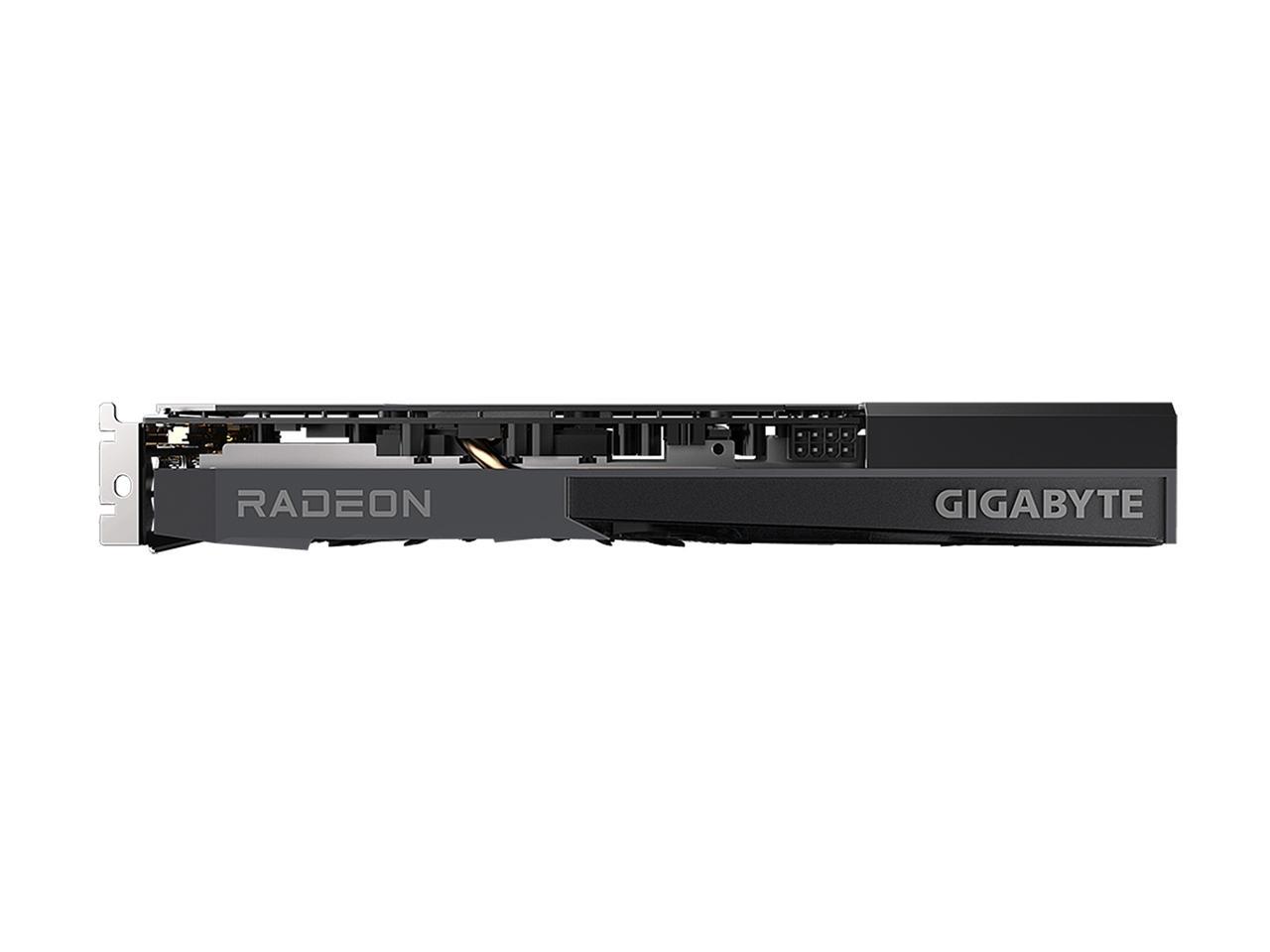 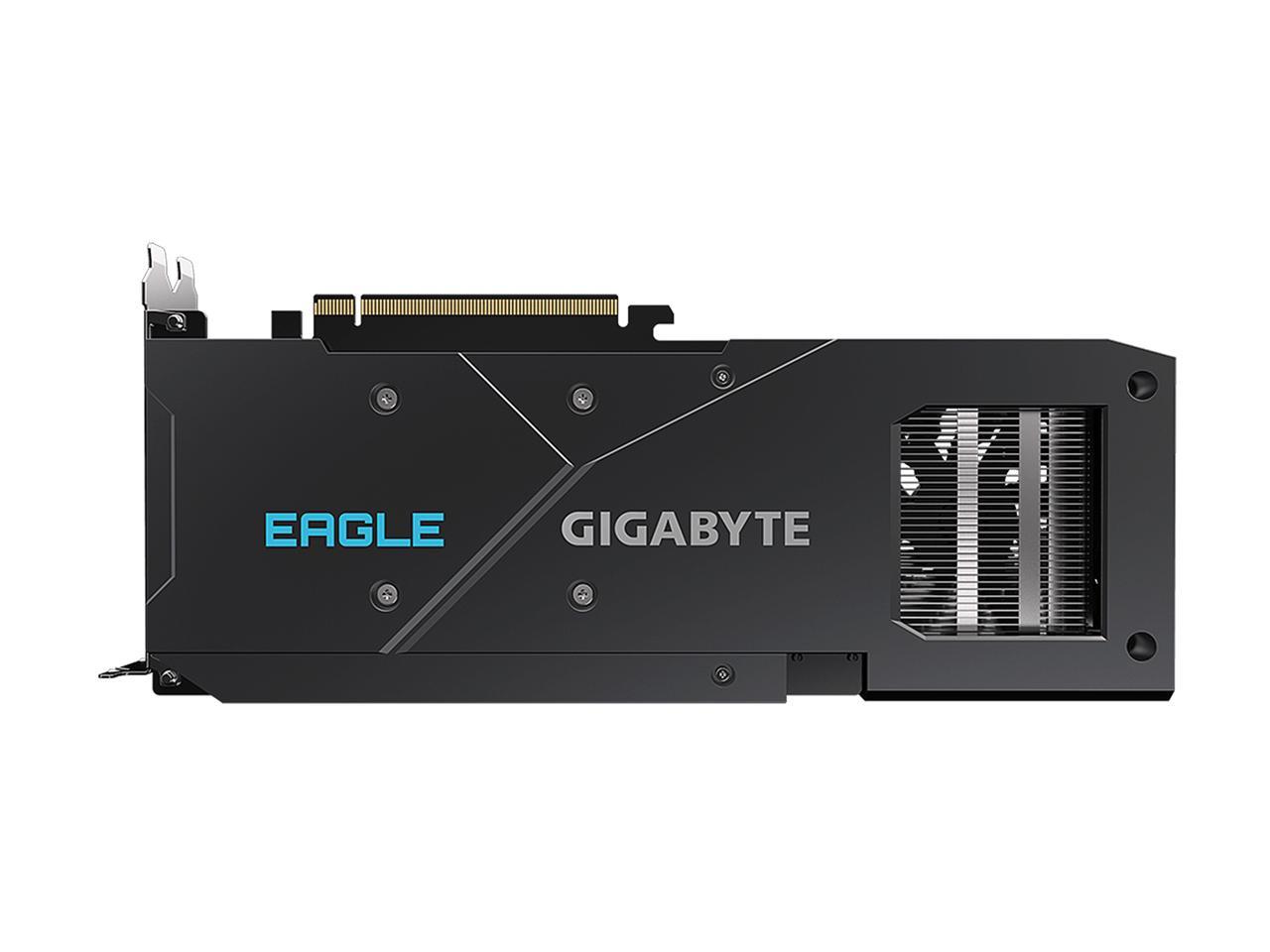 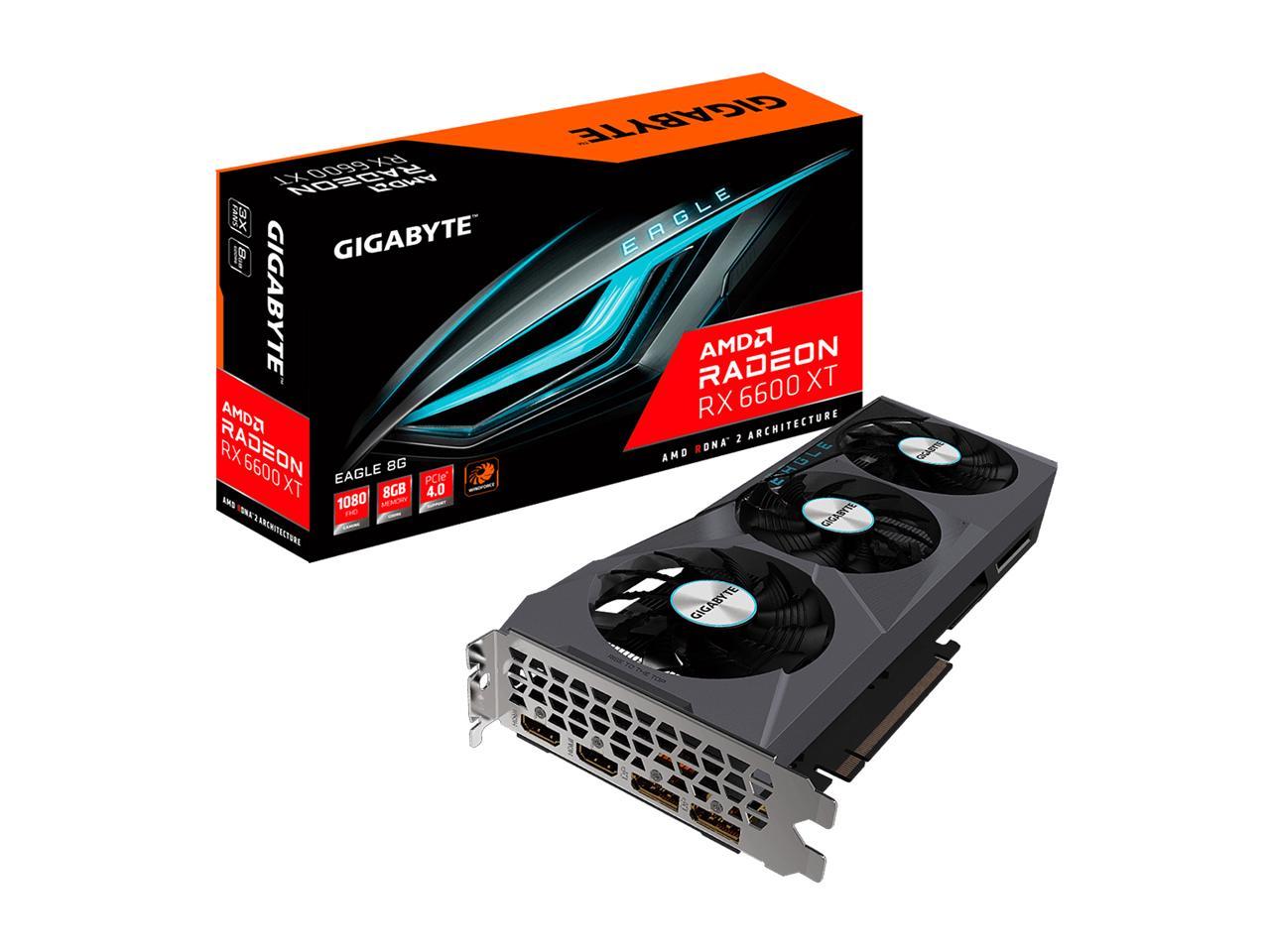 Learn more about the GIGABYTE GV-R66XTEAGLE-8GD

Overall Review: Arrived sooner than Newegg initially stated and undamaged. RX 6600 Xt is surprisingly good. Roughly 50% performance uplift over my GTX 1660 Super. Though I can tell the memory is just a bit slower when loading some texture intensive indie games. (Beam.ng Drive) It runs about 75c under extended load. Draws around 140w. Stock core clock boosting into the 2600's. After a few weeks of burn in, I'll see what I can squeeze out of it with an OC. I did reduce the max fan speed to 65%. The fans can go 5000rpm+ if left on their own. Which is definitely not quiet. But around 2500rpm, the cooling is sufficient and the noise level is average. I am running on pcie 4, Ryzen 3600 so no SAM capability to test. Card handles gameplay recording without a hitch. Maybe a few fps lost if measuring, but not noticeable otherwise. All in all a good mid-range card. Handles my dual 1080p displays just fine. All ports are working, thought the HDMI ports were not initially. Installing drivers solved that.

Overall Review: Definitely Holding its own super effective. Way better than my 1070.

Pros: Lightweight and low power. Seriously light on weight for what I pulled out, my Gigabyte R9 390. Single 8pin PCI-e power rail. Both of my display ports seem to be working for me out of the box and without need for updates to my hardware. I think the third fan and the pass through with the heat sink fins will help the most here for air cooling this. The box this came in was large and seemed well protected to me.

Cons: The plastic cover on the back of the card I do wonder how useful will be. It does however help to keep it light weight and easier on the human installing the GPU to a system. I did find it somewhat odd there was not drivers with the box, but I may be old school on this point. Just go download the latest from AMD anyhow..

Overall Review: Radeon's software here for the AMD cards really is nice here. So I fired up a game and loaded up my Radeon Metrics on screen With about 75% to 90% GPU Load give or take some, this GPU's metrics were as follow. 60 C - 66 C, 25 watt to 80 watt power draw. So it's far cooler and less power than my last GPU The biggest reason I wanted to get this was for a more efficient GPU and cooler room temps, not for 4k gaming, I run 1080p anyhow. This did replace my GV-R939G1 GAMING-8GD, also a Gigabyte card for those not wanting to look that up. I do have this in my Ryzen system, so the Radeon software works well for an all in one place to check up on metrics and driver settings for the system. Not to mention other useful things like recording stuff and more. For the record Corsair ICUE does see the GPU temp as well for anyone curious, well for me. I know for a fact that if you plan to run 4k on this card, maybe consider going to something other than a RX 6600, this is designed for 1080p gaming. Jayz does point out the 6600 works well enough for 1440p. That or I suppose be prepared for not the best FPS on 4k.

Pros: This video card is a significant upgrade over the GTX 1060 that I had, and is performing quite well so far.

Cons: Getting this card to work was a bear of a challenge. After installing it, I was met with "Input not Recognized" on my monitor, which I figured was due to the standard drivers included in Windows not working properly (they were showing up in Device Manager as having issues). After reinstalling my old card in the other slot, I was able to get the drivers installed, but the card didn't appear to be working, still, so I rebooted and noticed that my motherboard (MSI X370 Gaming Plus) wasn't recognizing the card, so I figured I had to update the BIOS, but upon attempting that, I learned that the motherboard doesn't like displaying things via Display Port while in "flash" mode, which resulted in me having to reset the CMOS. After resetting the CMOS and connecting my monitor via HDMI, I was finally able to flash the BIOS, and everything was then being recognized. If I was just a simple hobbyist, this would have been a major issue, so be careful buying this if you don't know what you're doing.

Overall Review: Overall, I am satisfied with the card so far, it was just kind of a pain to get set up in the first place.

Pros: Solid performance, a major improvement over my Geforce 960!

Cons: Fans are noisy at the default and quiet settings. Had to create a custom fan curve to meet my needs. Driver installation can be a little finicky.

Overall Review: This is a solid card if you can get it at or near MSRP. Games are running great and I'm able to even run the Unreal 5 Legacy of the Ancient demo at decent speeds.I don't mind the lack of raytracing as it's not important for my needs. The only issue is that installing the drivers took almost half a day of my time as I was getting the dreaded black screen issue after installing. It's not an uncommon issue with these cards. Uninstalling my previous Nvidia drivers, plus the AMD drivers, via DDU did not address the issue for me. It was only after swapping out my 5-year old HDMI cable with a new high-speed HDMI cable that I got the card working!