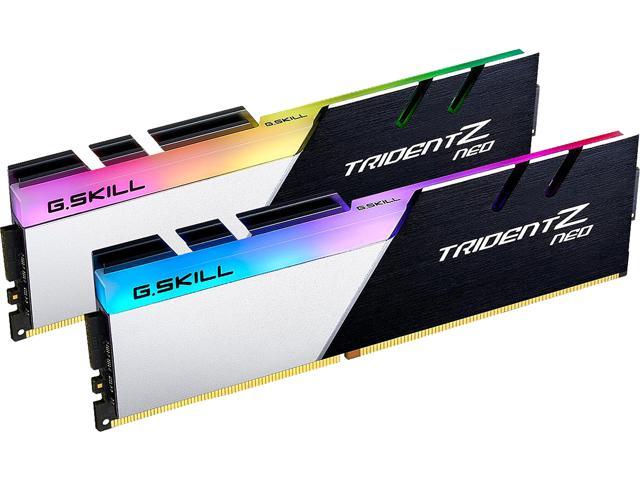 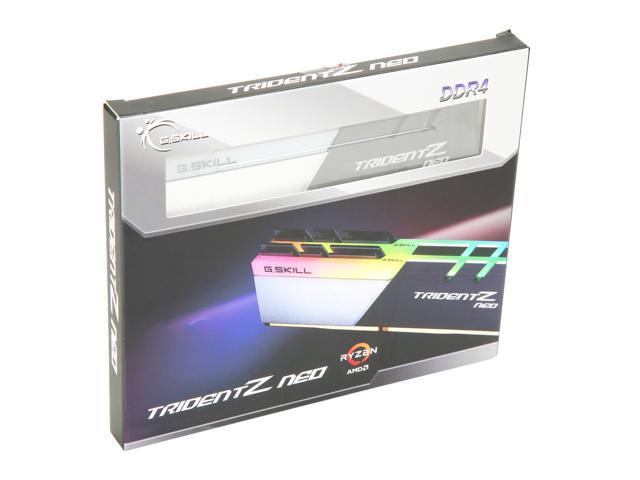 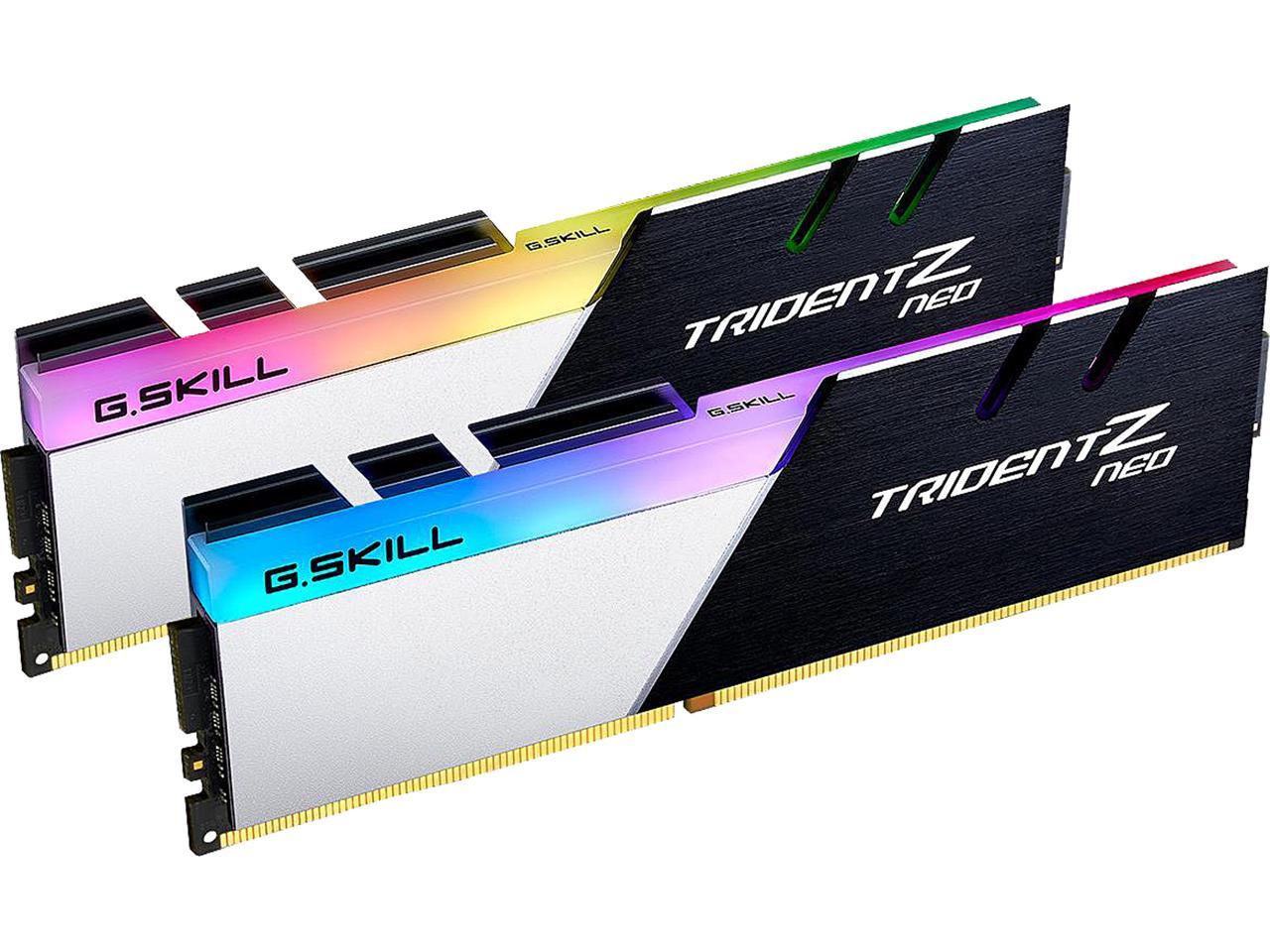 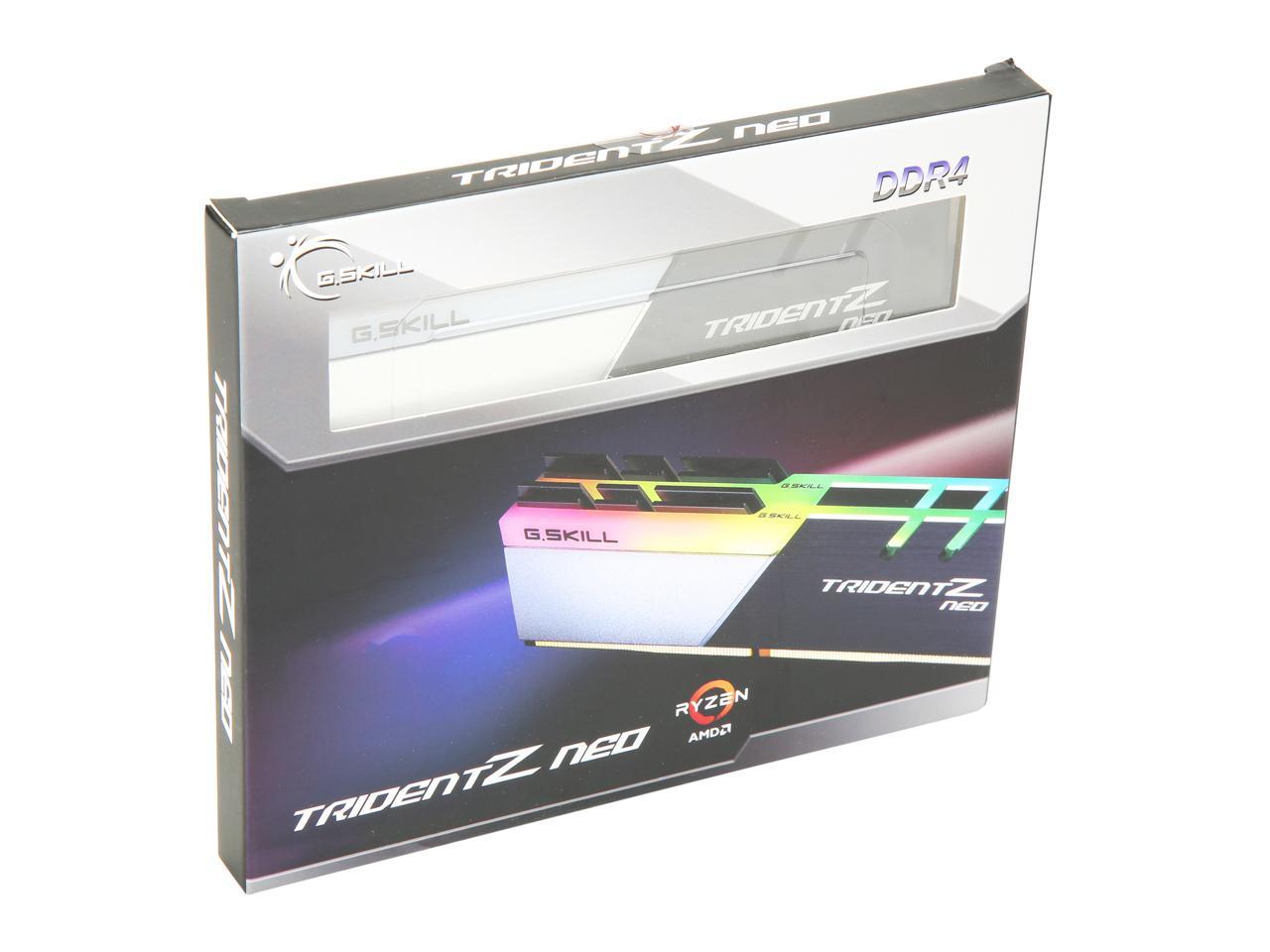 Designed for memory performance with the latest AMD Ryzen platforms, Trident Z Neo is optimized to unlock the full potential of the AMD platform to its maximum speed.

Designed with a contrast of black brushed aluminum and powder-coated silver, the Trident Z Neo dual-toned heatspreader adds power and boldness to your next-gen build.

Inspired by the racing stripes of sports cars and supercars, Trident Z Neo features a beveled edge along the top of the signature tri-fin design with the asymmetrical slant to achieve a sleek and clean look.

Crafted with hand-screened memory ICs and custom 10-layer PCBs, each and every module is made for maintaining the best signal integrity to achieve fast overclocking performance.

Tested across a wide range of motherboards to strict quality standards, Trident Z Neo memory kits are built for reliability, stability, and compatibility.

Pros: Ryzen 3000 scales very well with this RAM. I'm using it with a 3900x. 16GB Dimms at CL 16 with Timing 16-16-16-36 Samsung B-die The XMP profile worked as intended in an MSI x570 Meg Ace with low temps (around 33c on average) Sits around 1.364v (I think spec goes to 1.5v) The grey/white looking piece is actually metal like the rest of the heat spreader; it gives the kit a premium look that surprises expectations. It's also darker, like a gun metal look. Nothing currently available matches the performance of these Dimms out of the box.

Cons: Extremely hard to find in stock. Even harder than getting the CPU that it shines with.

Overall Review: I have nothing bad to say about this RAM other than availability. Thanks to G. Skill for this great product at a competitive price. Distribute more of them!

Pros: - Great looking - High quality 10 layer PCB - Beautiful LED - Beautiful high quality heat spreaders - Samsung B-die - Overclocks really well - I bin RAM as a hobby and what I have found(relating to Ryzen) most kits are bottlenecked by the CPU's UMC

Pros: Good for set XMP and forget. Great for Overclocking

Cons: No way to turn RGB lights off and have them stay OFF!

Overall Review: This is for F4-3600C16D-32GTZN - Not to be confused with the cheaper F4-3600C16D-32GTZNC These are Samsung B-Die ICs in dual rank configuration. If you are looking at this is kit for a Ryzen build, look no more. I bought this RAM after having some poor experiences with another RAM kit from Patriot (also B-die). To be fair, the kit was not in my motherboard's QVL and I was trying to run 4x8gb. I Could not get XMP running. OC'ing with DRAM CALC never gave the best stability as much as I tried. I wanted 32GB and my motherboard (MSI x570 Unify) has a Daisy Chain memory layout and it prefers 2 sticks over 4. So I returned them and got this. Paid the premium for them, but my life has been so much easier. XMP profile booted right up and after importing the XMP profile on DRAM calc I had them running along very nicely at 3800mhz with tight CL16 timings on my 3800X (with 1900 FCLK). Performance is great. To be fair, you could also get other dual rank 32gb 3200mhz CL14 kits from Gskill that are a bit cheaper and also get similar if not the same results. But I recommend this to anyone (like I was) looking for a sure fire / high performance memory kit that is granted to hit the sweet spot for Ryzen (3600CL16) right out the gate.

Overall Review: Can probably get better timings, but I'm a noob and the system is very stable where it's at. May post better timings in the future if I get them 64ns in AIDA64 is way better than the stock 69ns I started with.

Pros: - As far as I know, this is kit of memory in 3600 mHz with the tightest timings out there. - Great looks. - Nearly zero variance across 4 different kits.

Cons: The heat spreaders are sharp (they warn you about it) but you really have no other way to push on the DIMMs to slot them in. It'd be nice if they updated the design with a little bend in the furthest plates that would cover the top RGB diffuser. It wouldn't change the look too much while providing a nice resting spot on the edges for your fingers when you install them.

Overall Review: First off, this kit is for a very specific audience. It won't make your computer faster in most cases when compared to other kits in the same series. If you don't know if 16-16-16-36 timings can help you, it's probably not worth it over their 16-18-18-38 kit which often goes for nearly half the price. You won't see any difference unless your workload makes it impossible to keep your CPU busy while it waits for memory. It probably won't help your video encoding, 3D rendering time or scientific calculation times which all depends on data available in advance. It probably won't help getting higher framerates in games or how many browser tabs you can keep open because those are dependent on moving more data (frequency), not waiting for it less (timings). Tight timings are beneficial for real-time data processing and edge cases where your CPU would have to stall waiting for data. Those are things like low 1% frame-times in games, live audio processing, live-streaming with CPU encoding. The kind of stuff where it's impossible to know the data 1/20th of a second in advance, basically. And even then, only expect a 5-7% improvement in those specific 1% scenarios where it matters. Of course, you can still trade those timings for a higher frequency overclocks, if you get lucky and know what you're doing, but you might as well get a 4000 mHz kit at that point. As for my personal experience with those, unfortunately, I got really unlucky with my CPU/board combo in the silicon lottery. While the 8700k I tried them on are known for their easy 5gHz overclocks (my board even come with a "one click 5gHz OC profile"), mine refuses to go over 4.9gHz without crashing, no matter the voltage, and is insanely hot at stocks settings... like... 95C+ on a good AiO hot... Even then, I managed, with very little tweaking, to get the XMP profile to work. I have 4 kits (8 DIMMs) and have tested all of them as sets of 4 DIMMs at a time on that build. They all worked perfectly fine with the same adjustments when compared to the previous memory that was in the system (4x8GB Trident Z 3200 16-18-18-38 which ran XMP out of the box). All they needed was a slight voltage bump on the memory and base CPU offset while dropping the turbo adjustment voltage to reduce the variance between low and high power states. I've run multiple burn-in tests for about 6 hours on both sets of 4 DIMMs and they all worked perfectly. In other words, while their XMP profile didn't technically worked out of the box on a very picky system, it took me less than 5 minutes to get the machine to not only POST, but also survive a 6hrs torture test... for any mix of 4 out of 8 DIMMs that I got. Amazing! I cannot wait to see how they will fare in my next AMD build.

Pros: Runs faster than 3600 without my having to tweak anything beyond enabling the XMP. b-die works as the internet says it does.

Cons: RGB....I adjusted it do just white with the g-skill software. I didn't really want any RGB stuff....but figured, "what the heck", and left it on.

Pros: Am able to run this kit at 3733MHz with the XMP timings and no additional voltage with a 3900X and AsRock X570 Taichi, highly recommend.

Overall Review: Great kit with tons of OC headroom if you plan to plus RGB, you can’t go wrong with this kit.

Cons: I wished I had gotten the 64GB kit instead of 2 of these kits. Had to experiment with the RAM slot placements for the 4 sticks of ram for it to work nicely in XMP. If it's just 2 sticks (1 kit), no problem.

Overall Review: I've bought a total of 3 of these kits. (2 for me, and 1 for a friend) Successfully ran 2 kits of these RAM (for a total of 64GB) at XMP, with a tweaked Command Rate of 1T (instead of 2T - according to an article on Tom's Hardware, this is one of the simpler tweaks that yields noteworthy performance improvements). Tested overnight using Prime95 Ram torture settings, no issues! Using a Ryzen 3950X on a x570 Aorus Xtreme. I wished I had purchased the 64GB kit (3600 16-16-16-36) instead, but I started out with one of these, and had to upgrade later. I had to help a kit for my friend (RMA# ending with --960), and I've completely happy and satisfied with G.Skill's customer service! Thanks so much!