UNAVAILABLE FOR AUSTRALIA Shipping Limitations
Sold by: Newegg
Shipped by Newegg
This item is currently out of stock and it may or may not be restocked.
UNAVAILABLE
Add To Wish List 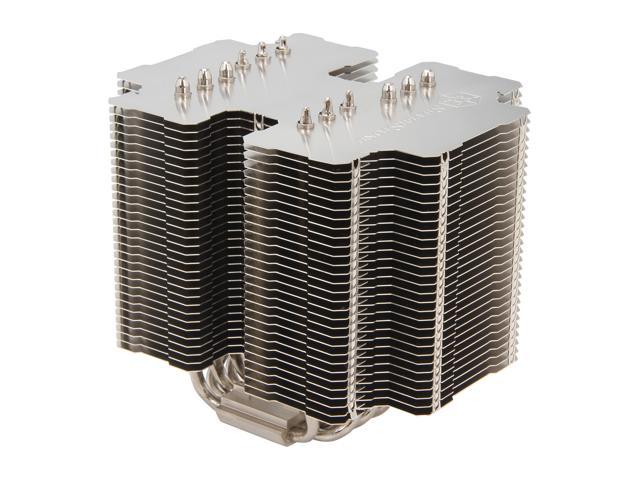 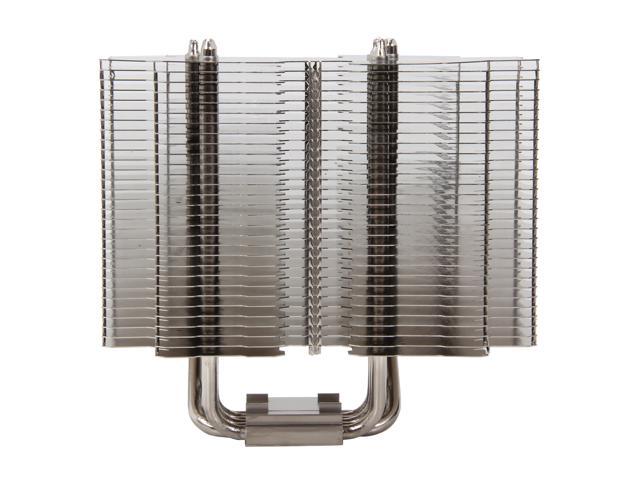 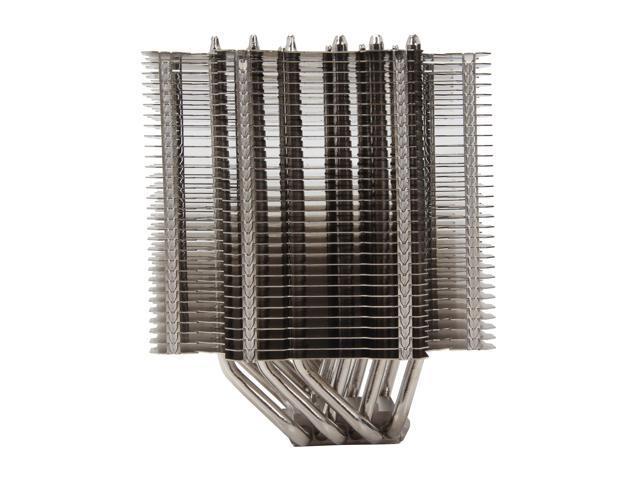 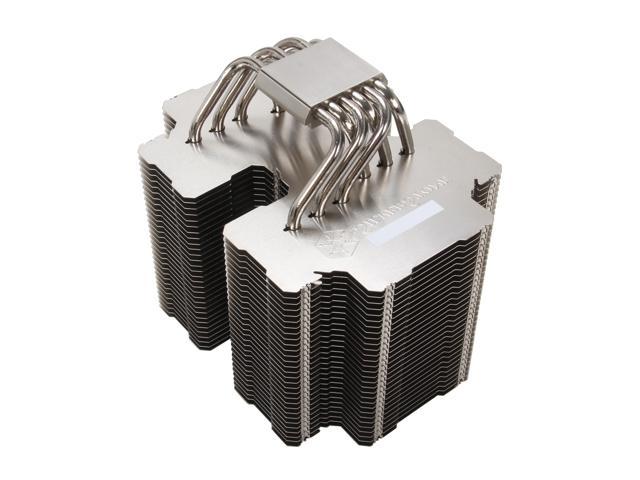 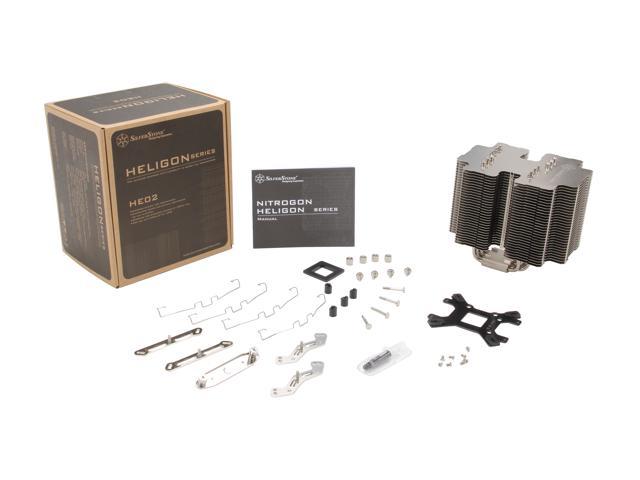 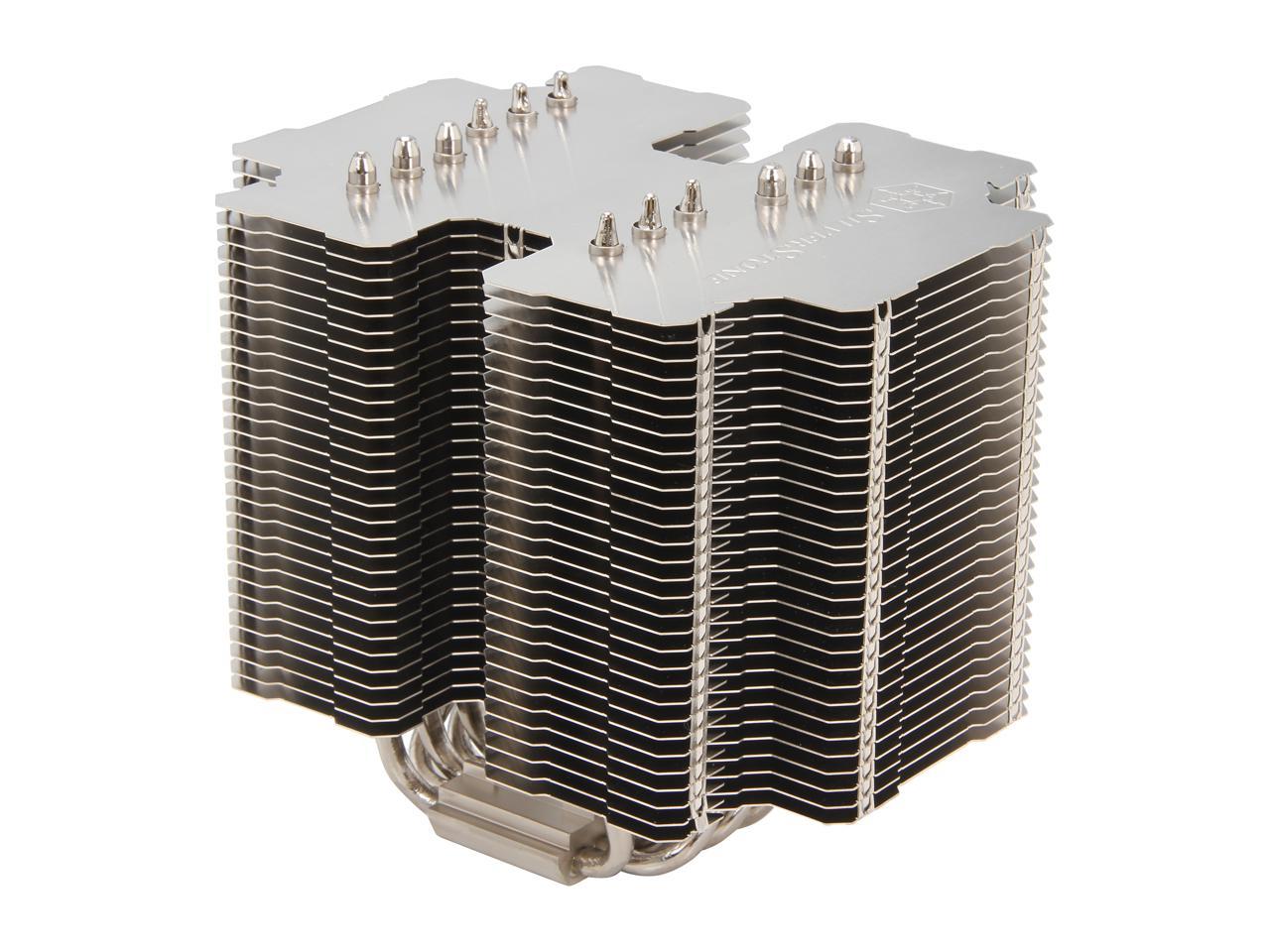 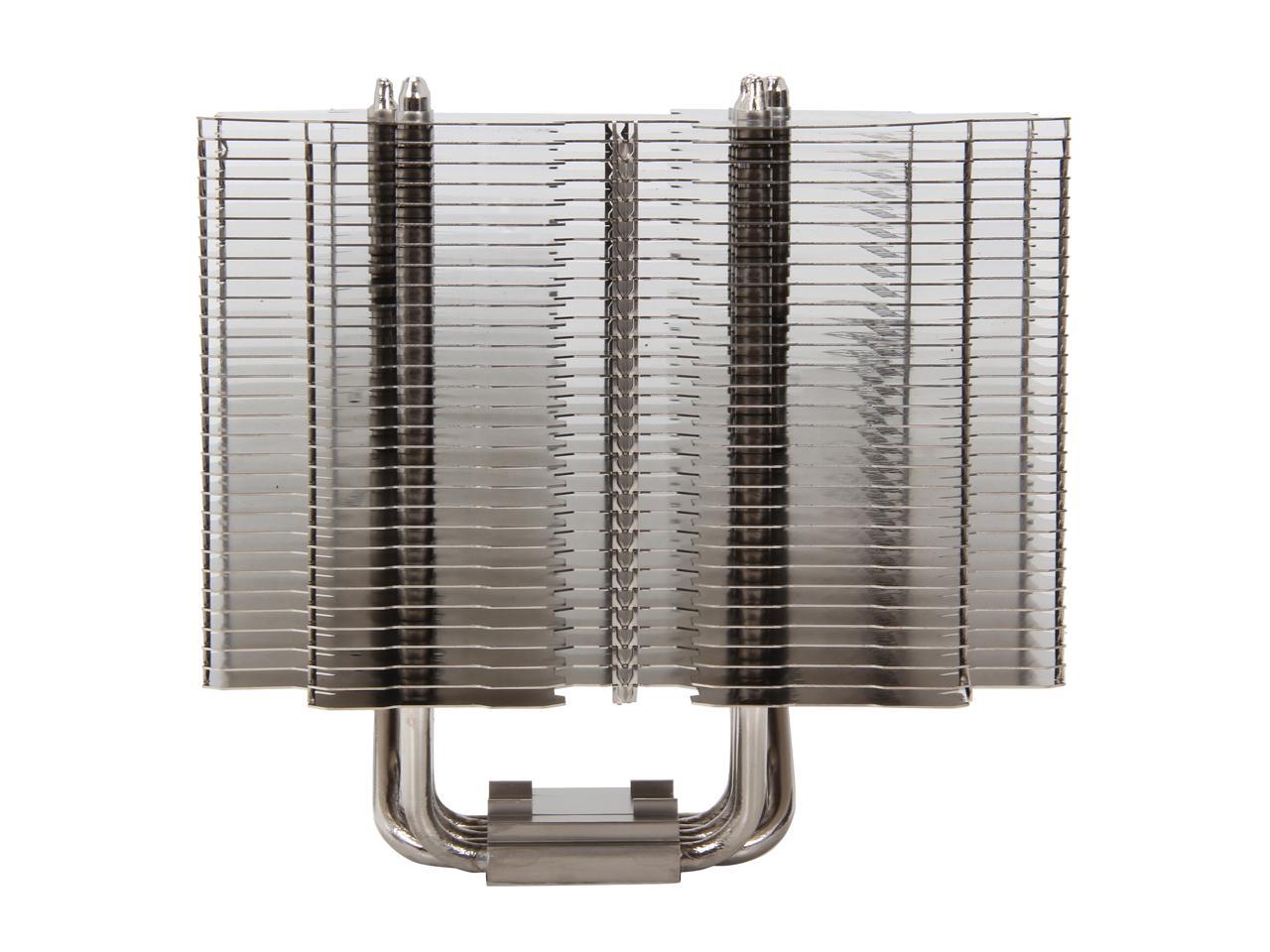 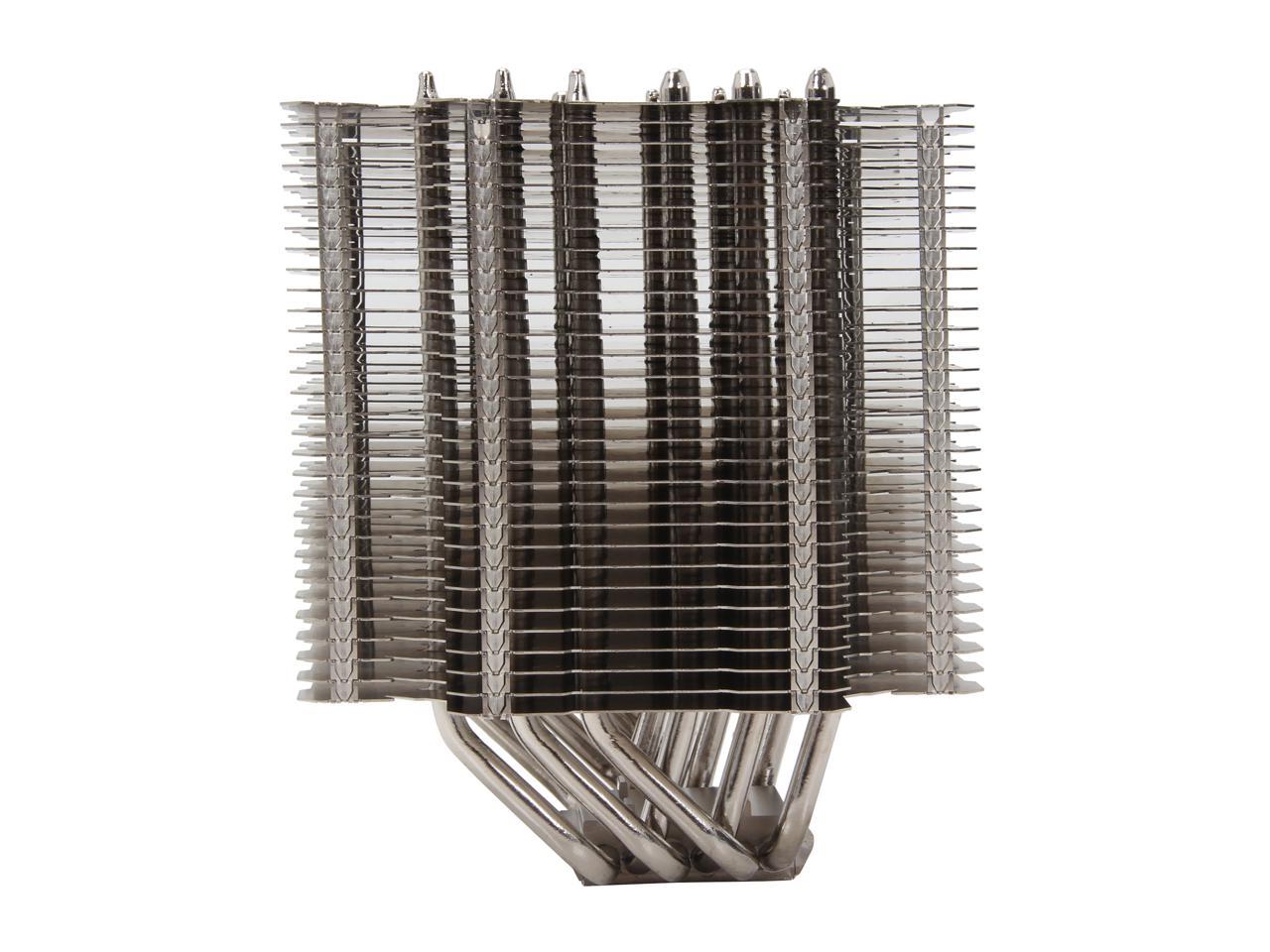 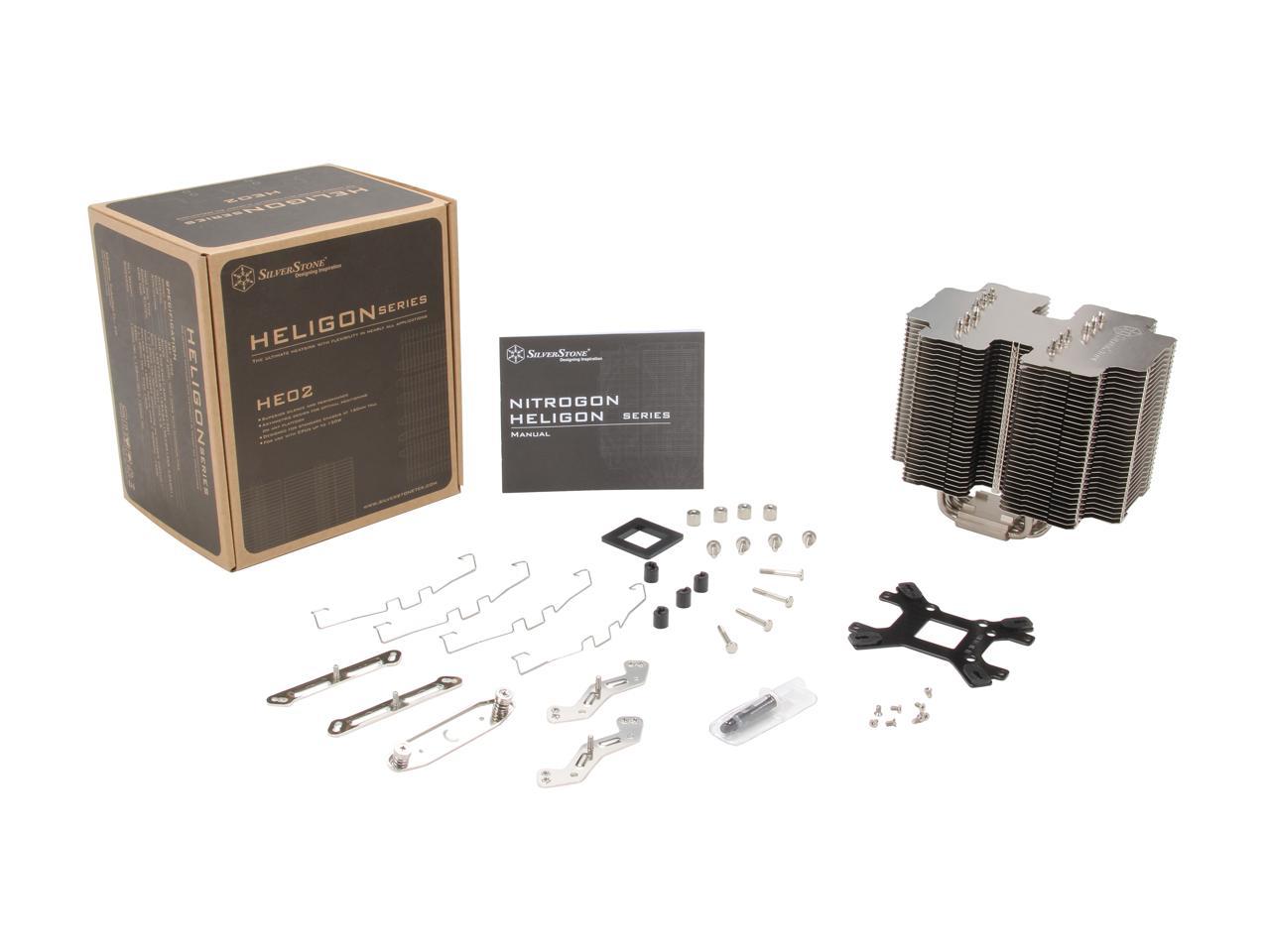 Learn more about the Silverstone HE02

Pros: Massive Cooling Potential. I installed this in an FT-03 Case with an I7-4771. The case layout puts the case fan within 5mm away from the heatsink. In this configuration, there is no need to attach a fan to the heatsink. Having not done a baseline test on the OEM cooler, I can not give any constructive feedback comparison. I can say however that after running futuremark on CPU test for 10 minutes, the peak temperature was 51 Deg C throughout and the CPU never came off of CPU Boost. (4.1 Ghz) Super impressed with the design, install hardware. LOVE IT!

Cons: It is expensive, but I believe that it is good value. The clearance between the PCI-E card and the cooler is non existent. I believe that it will short out any video card due to the contact with the circuit board. I easily solved this issue by taking the clear plastic box that my memory modules were shipped in and fabricated an isolator, there was no need to figure out how to hold it in place, it is so close that it just stayed. The clear plastic is invisible in the case.

Overall Review: You will need a very long #1 Phillips driver to make the install easy. You should not power up the system until you have checked the gap between the cooler and the PCI-E Card. (See Note in Cons)

Pros: Keep my I7 4770 at a nice and cool 40-45 degrees celsius while doing normal use and with games just peaks the 60 degree marker which is fantastic and probably just as good as the stock fan or slightly better. For no noise power rig this is a big success and will continue my passive rig style again next week. No noise, less dust, and no warm room when it's been on too long = happy nerd.

Cons: Thought it would vacuum my room better. Also, I wouldn't go with this is you're a big time over clocker however I think this will handle the 4770k fine. Also, don't think a high wattage CPU would do so fine here either so you're a bit limited with the CPU selection if you're a higher-end rig guy. Still this shouldn't be in rigs with tight budgets.

Overall Review: Also, make sure you have a second person available to help install it. This is HUGE. Lastly, watch the ram sticks you use since this will be a tight fit. As CPU/GPU's get more smart with their architecture/less watts I think the passive h/w will be a great option if you don't mind spending a bit more $$ for a smart/quiet machine.

Pros: I almost bought the NoFen CR-95C, but I got the He02, because I wanted the option of using fan(s). I wound up using two Noctua fans (push-pull). This is the best passive heatsink I have ever used, and if you use just one low-rpm fan, the temperature really drops fast. In fact I ran BOINC (100% stress) with only one 800 rpm fan switched on! I was using an AMD FX-6300 six-core processor. The adapter mounts are stiff and very strong and allow for 4 different positions of the heatsink.

Cons: The heatsink is very tall, and it will hit a side-panel fan. It hit my 220mm fan, which I removed.

Overall Review: I would buy another one, but I want to try the new Zalman FX-Cube cooler, which is coming soon. Another passive heatsink to think about is the upcoming Thermalright HR02. Overall, this is an awesome CPU Cooler, and it runs well in stressful conditions. I'm very happy with this silent CPU Cooler! Silverstone rocks!!!

Pros: Works! Built a new machine which I wanted silent and so I was looking for a passive CPU solution and thought I'd take a chance on this. I am so far please with it after ~2 days. CPU stays cool and I expect it to get even better once the thermal paste sets.

Cons: LARGE! blocks one of my RAM slots. I was hoping it wouldn't but was almost certain it would so I won't take an egg off. The mounting instructions weren't perfectly clear, but they weren't terrible. If you've never mounted an after market heatsink, be a little cautious and read ALL of the instructions/diagrams before starting the first step.

Overall Review: I'm pleased with my purchase, I thought about putting a fan on it, but I have a rear fan and two top fans pulling air off of this which are almost as close as if they had been mounted. I'll update later if there are any problems with it... but I'm not expecting any. THIS IS A VERY. VERY. LARGE HEATSINK. Make sure you run as many of your cables as you can before you install it.

Pros: this thing is just huge I would trust this thing to cool my car engine. regardless of its size it blocks nothing (unless you add a fan see other thoughts.) I have four g.skill ripjaws x series with those nnice big heat spreaders and they don't even touch. you do have to take it off though to add more ram unless you are the master of angles but that's not that complex.

Cons: due to its large size install is a bit of a pain in the buttox but I found a way around it. put on every single mounting part specific to your setup and then slide the heatsink under the middle bar so in theory you only have one side to screw in and make sure you have a very long screwdriver

Overall Review: so about adding a fan. you can add a fan in either a push or pull setup but the problem I ran into is that if you have it situated horizontally so that its length is longer then its height then it might block your first pci-e slot with a fan attached I assume with a bit of tinkering you could set it up verticall so that its offset upwards but ill do some measurements on that. im running off of the asus maximus VI hero 1150 so I assume anything else that is atx and obv e-atx will be a perfect fit sfor anything you want to add also in-win gr one case full atx tower it is roughly 8 inches tall give or take so make sure your case is wide enough

Cons: 1. Too big! Make sure your case can take it. 2. May come too close to VGA card/RAM 3. Mounting is clumsy and hard to work with

Overall Review: This thing will cool a 65W i5-4570S with no issues at all. Great for building totally silent rig - great for bedroom computer. Just don't trust the reviews on other sites that says this won't cool you i5/i7. They are testing it with K-series CPUs, which is nonsense for a zero-fan setup. This is perfect for 35W and 65W CPUs (T and S series). However, there's something you need to be aware of: 1. Mount your motherboard to the case, bracket, CPU and RAM before you install the cooler. It will block the access to screws, CPU power cable and RAM! 2. Make sure it clears your VGA. I had to mount it upside down to clear my VGA card on the first PCI-E slot in my mATX board. 3. Use low profile/normal profile RAM, no heatspreaders. 4. Make sure your case can take it. My bedroom rig is totally silent now with FSP silent PSU, i5-4570S with HE02, 128GB SSD and 5450 with just heatsink all put together within a CoolerMaster N200 case.

Cons: I like that is asymmetrical, allowing you two options for rotation, but it is so massive off-center in one axis that you actually cannot mount it in that direction on a MITX mb, as the cooler overhangs the rear of the mobo (over the I/O ports), making it impossible to mount in a case. Had they split the heat pipes to the CPU corners, they could have added 2 more possible orientations available; had they paired this change with an additional axial offset, the cooler would provide several options for rotation and thus component clearance.

Overall Review: I bought this for a new i9-9900k build on an AsRock Z370 mobo- it's pricey but was one of the few coolers I felt it would be safe to use passively on this CPU. I will say that is looks great, cools great and somehow (?!!?) fits in my case.

Pros: Able to passively cool i7 8700K when in stock config. Looks pretty awesome. Held core temps at 79C or less during 3 hour Prime95 max heat burn in test in default config. After delidding cpu and using kryonaut thermal paste instead of the included thermal paste, core temps stayed at 69C or below during 3 hr max heat 100% CPU load burn in test. Adding a single 140mm fan at the top of the case above the HE02 kept it at 65C for the same stress test. Has enough clearance for G.Skill Trident Z RGB memory (44mm) regardless of mounting direction, though the memory will touch the bottom heat fin in all mounting directions but one.

Cons: Extremely difficult to attach to mb inside case due to size, but attaching it before placing it in the case blocks off motherboard connectors for cpu power. If mounted so that fan mounts force air upwards in the case, it blocks off the top 16x PCIe slot. Mounted to force air toward the rear of the case, this is not an issue, though the cooling is not as efficient in a rear-facing config either.

Overall Review: You aren’t going to be overclocking with this, but you shouldn’t expect to with any passive solution. It is very good for stock cpu configs when you’re trying to reduce background noise, however. I used this in an audio/video playback system, and have been very pleased with the results. Just be sure to measure all your clearances first.