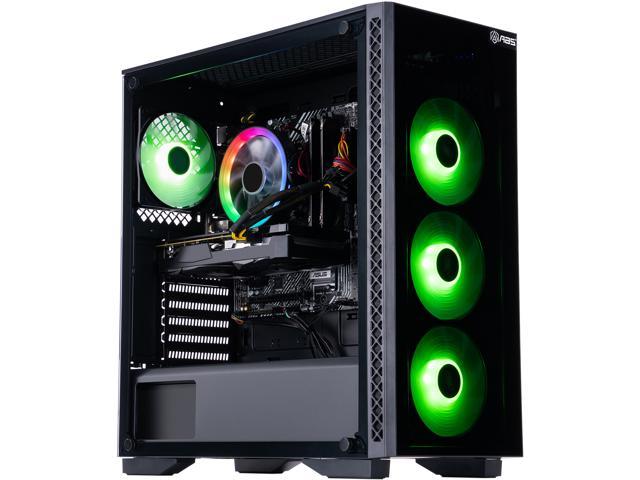 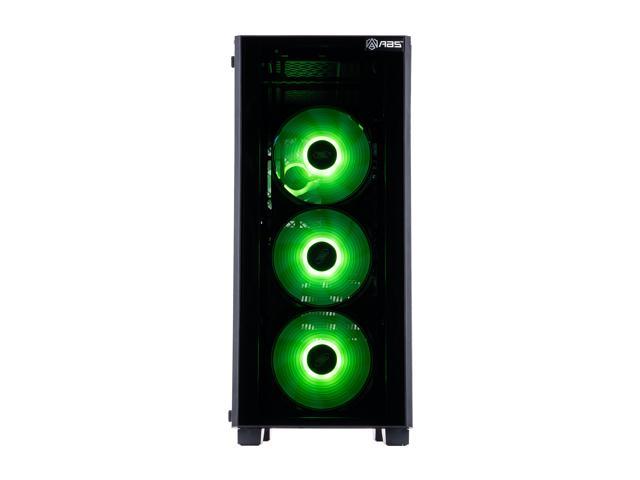 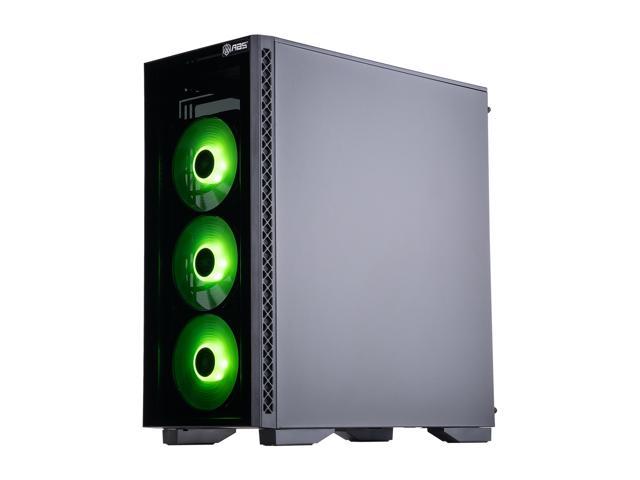 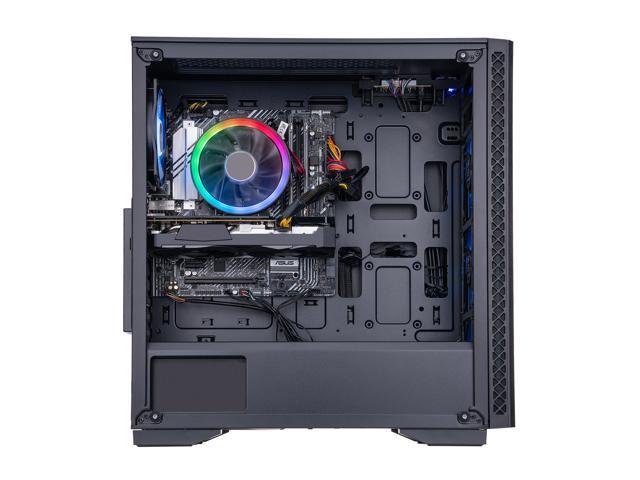 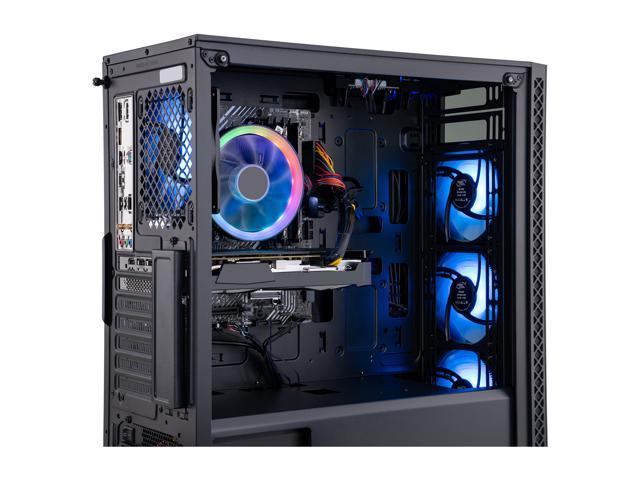 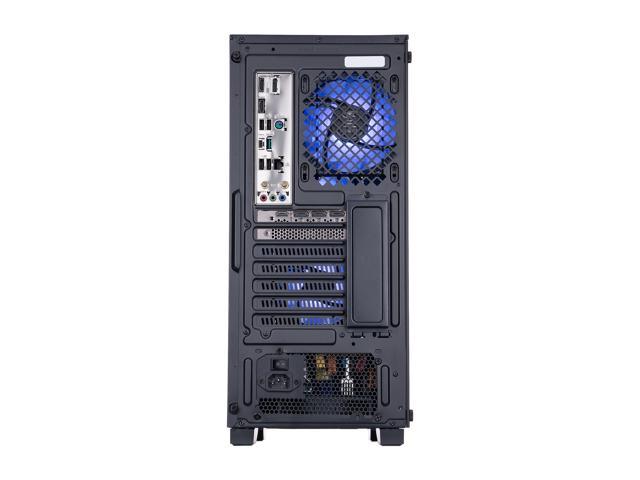 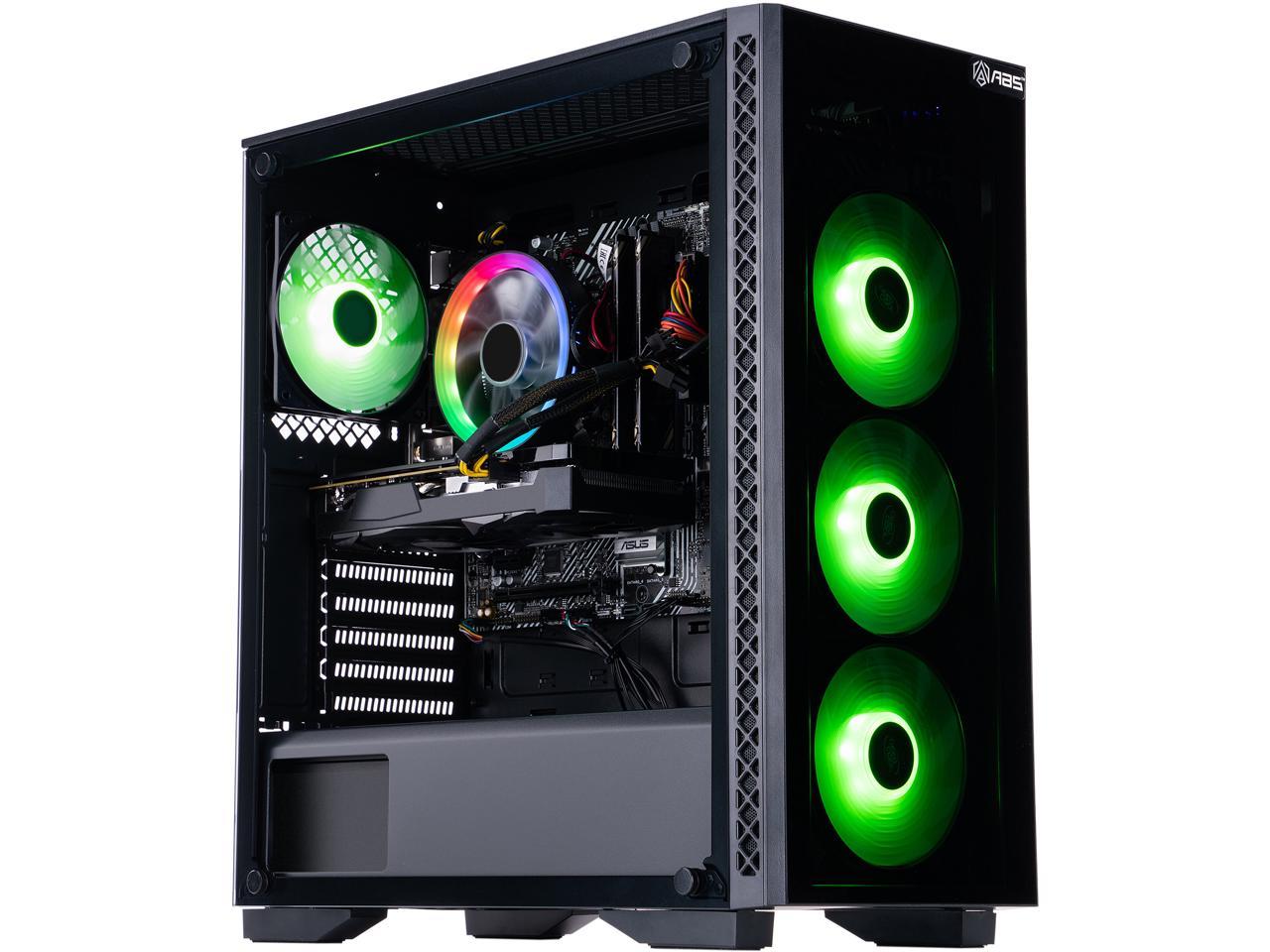 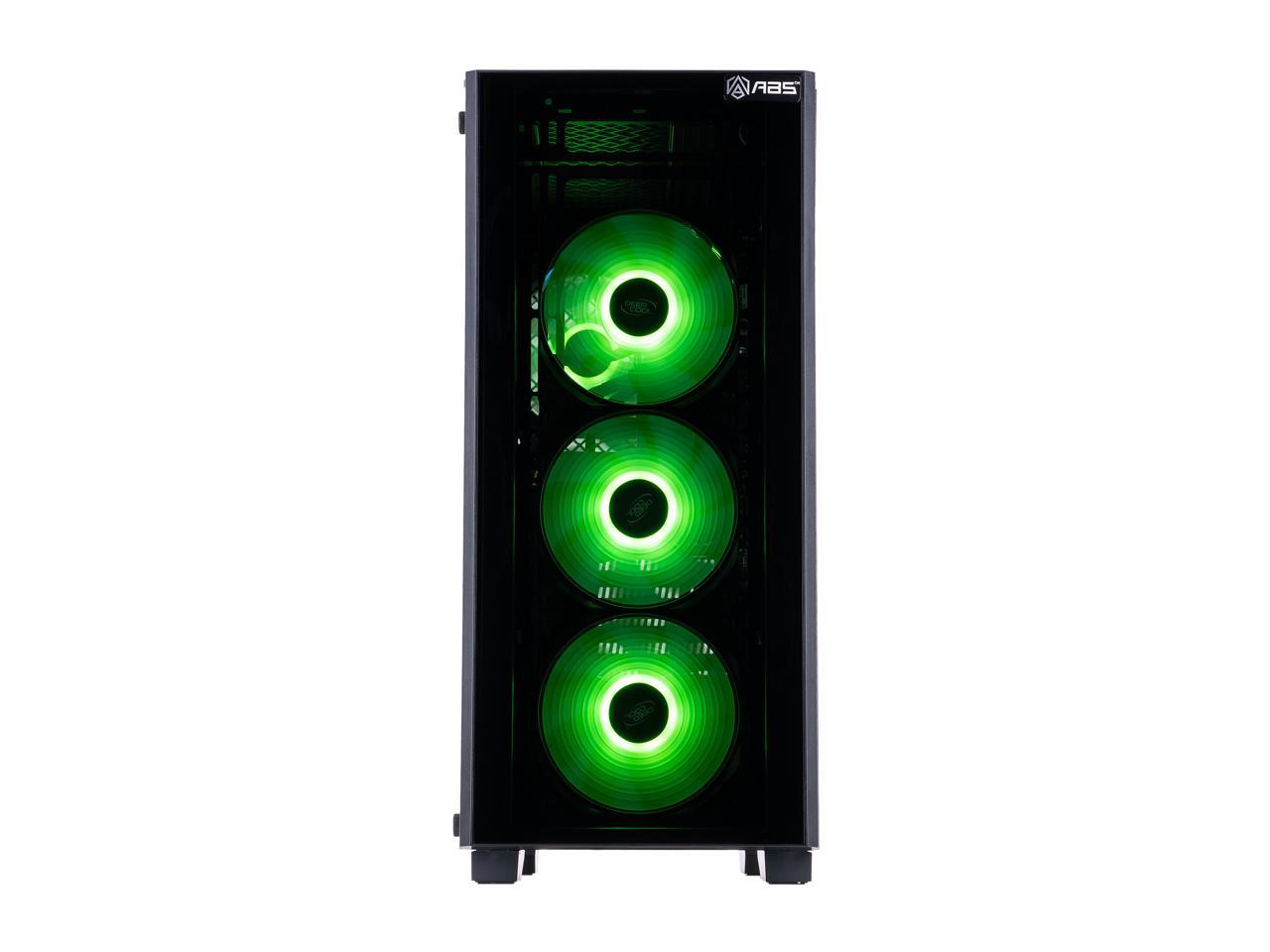 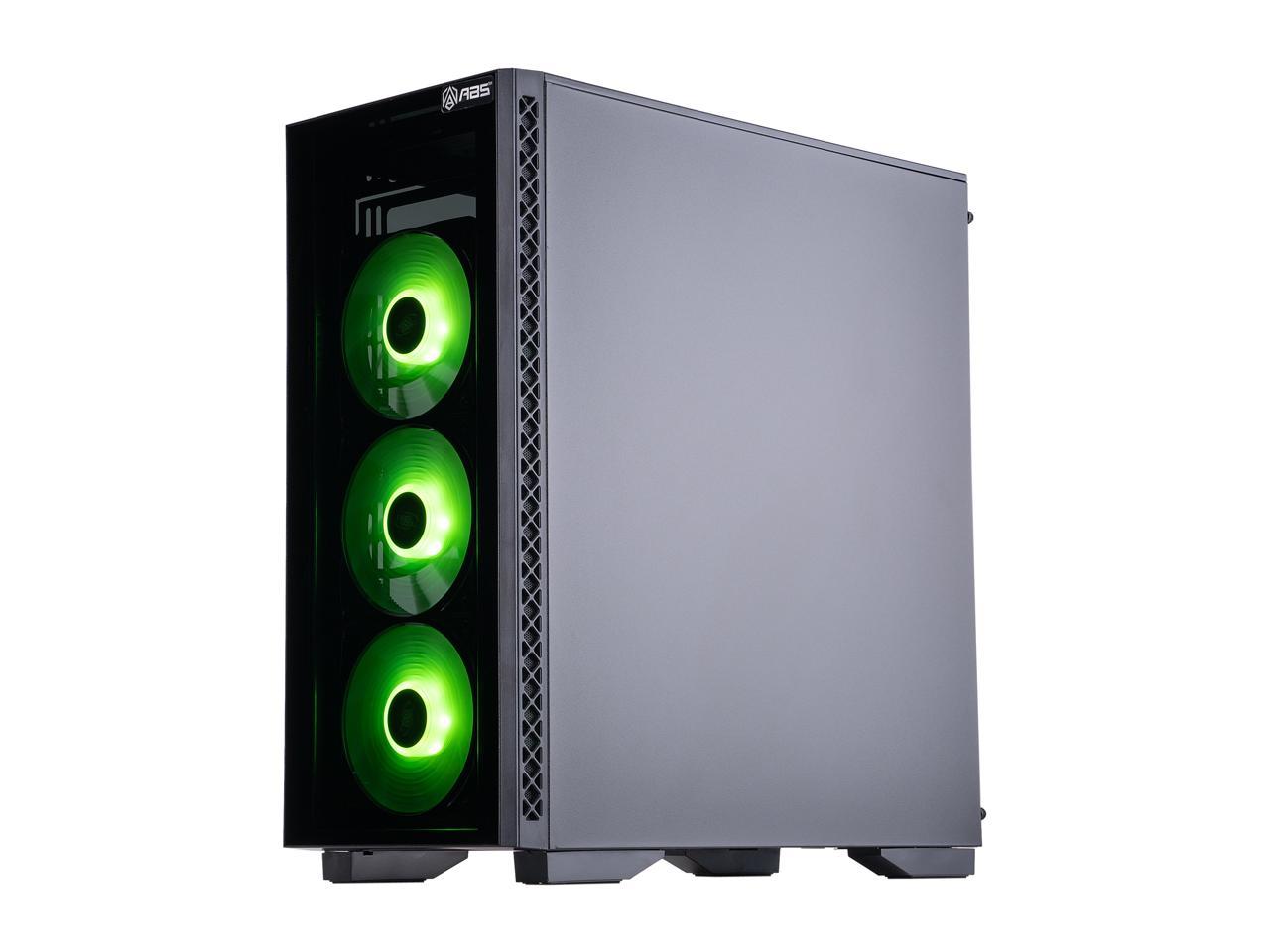 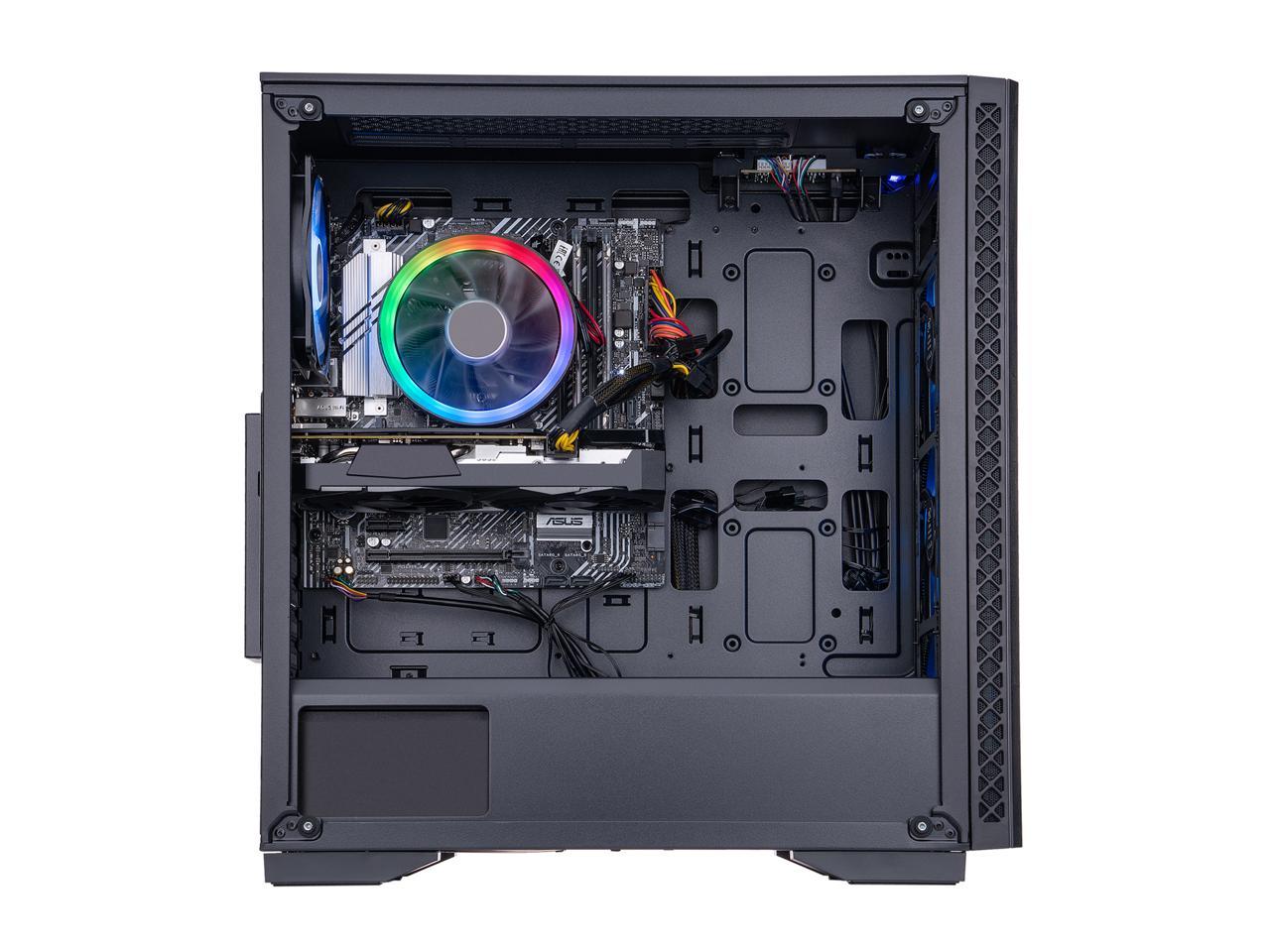 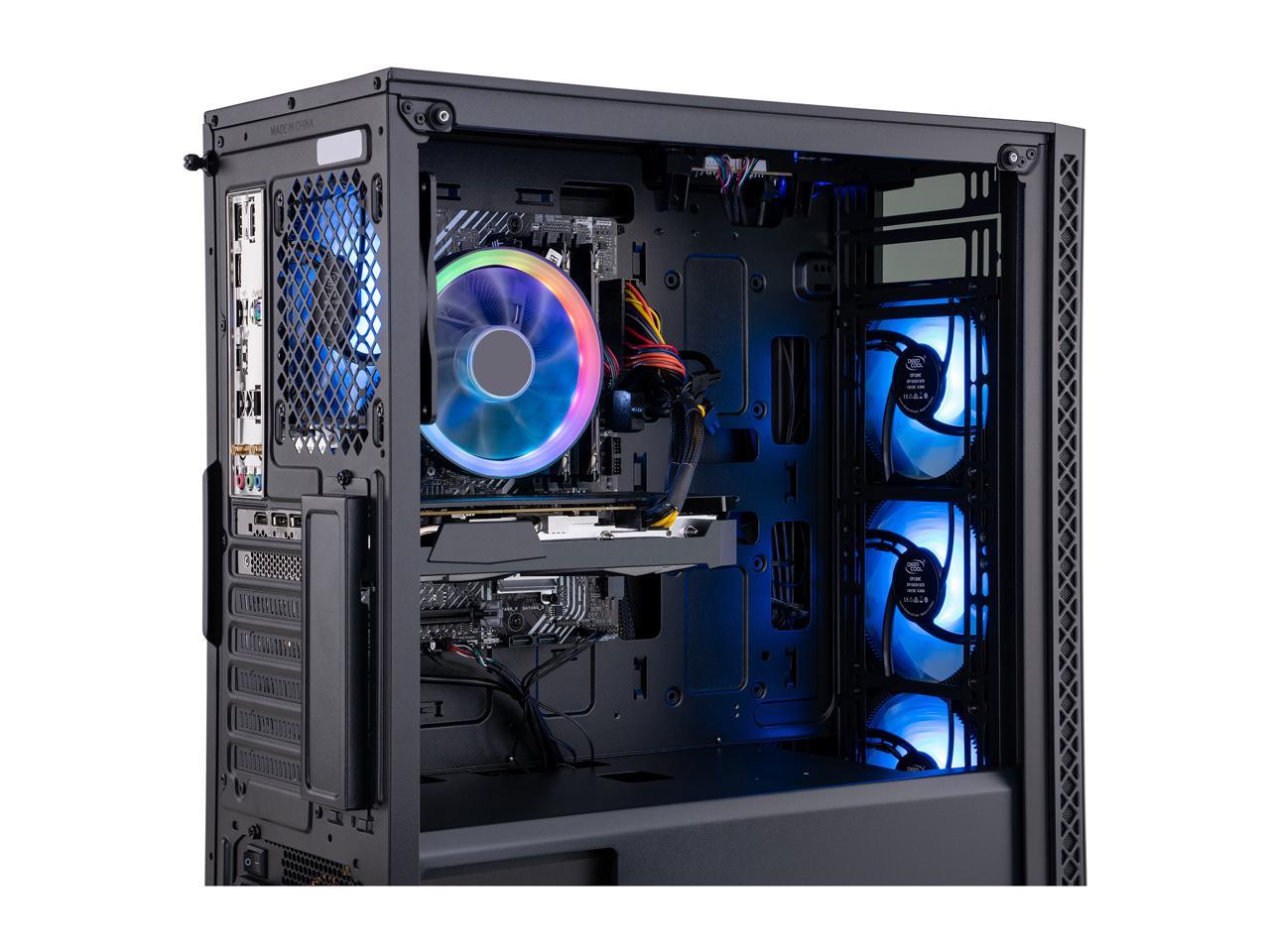 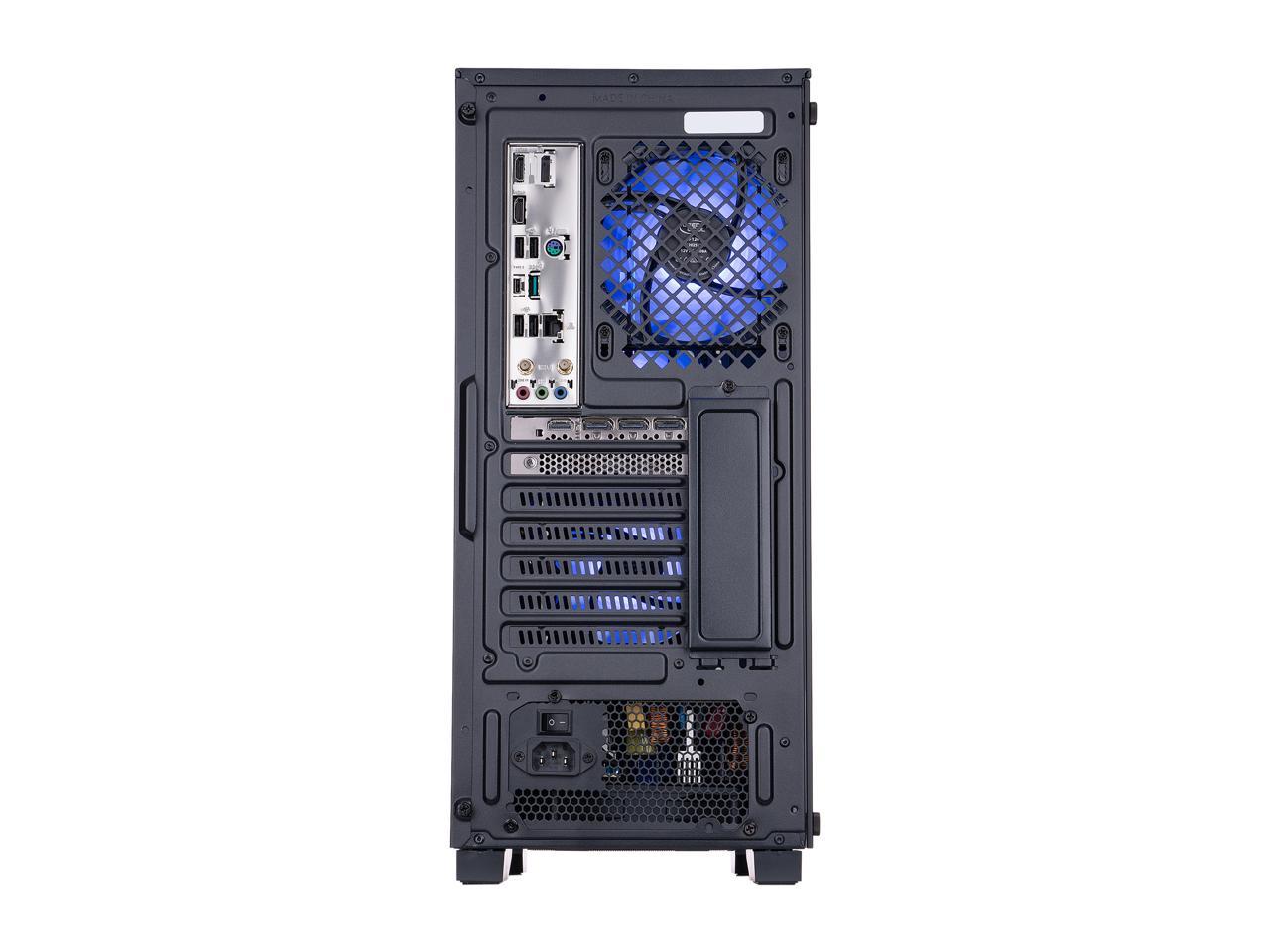 Get the ultimate performance in gaming with the ABS Master Gaming PC. Powered by 11th Gen intel core i7 processor and GeForce RTX 3060 Ti-GPU based graphics card, this PC brings your gaming experience to a new level, while the tempered glass side panel shows your build’s internals in the RGB-illuminated compact mid-tower case.

A new generation of Intel Core processor offers awe-inspiring performance with up to 8 cores (16 threads) and 4.90 GHz Max Turbo Frequency, so you can play, record and stream simultaneously with high FPS and effortlessly switch to heavy multitasking workloads.

Learn more about the ABS ALI560

Overall Review: I have built 3 computers in the past (2 for my brother/dad) and I personally upgraded from this build: GTX 1060 6gb, i5-6600, 16 gb ram. There has been a graphics card shortage in recent months so I decided to just bite the bullet and buy a prebuilt and the leap to a 3060ti seemed logical. The delivery time (2 days) and packaging were fantastic. The graphics card was held firmly in place by Instapak Foam which I really appreciate. Seriously, go google Instapak Foam and you will see how neat it is. The RAM is from OLAY which I am honestly fine with, no problems here. The SSD is an MSI M370 1TB m.2 stick which is actually a really great SSD. The Graphics card is a Gigabyte 3060ti Eagle which again, is a nice GPU. The Power Supply is a Gigabyte p650b which is generally used for low-mid tier systems but I am not going to do any overclocking so it's not like I am going to be pushing this PSU to its limits. I only have two real problems with this prebuilt. 1st, if you look at the pictures I have attached, the case actually creeps up heavily onto the ports on the graphics card. I physically am unable to plug in any HDMI or DisplayPort cables into the computer. Pictured are not 1, not 2, but FOUR different cables that I couldn't fully fit into the ports on the GPU because of the case. Because there is almost no clearance for all 4 ports, you either have to get some kind of cable that is incredibly thin at the ends, or just take some metal shears and cutout part of the case. The 2nd problem I have with this build is the CPU cooler. It is a thermaltake ux100. Yeah it looks pretty with its RGB lighting, but the thing is terrible at cooling. Just watching a youtube video in a 73 F degree room meant the CPU crept up to 39C-50C minimum. I know low load/idle temperatures don't really matter, but I literally got better CPU temperatures on my i5-6600 using the stock intel cooler. Playing Aliens: Fireteam gave me an average of 77-83C which isn't terrible, but it's not great. Opening up Vermintide 2 and watching the starting cutscene (not even playing the game) rose the temperature up to a crispy 93C average. I opted to just grab a Vetroo V5 CPU cooler online for $30 and my CPU temperatures have been fine ever since. Honestly not a big problem because entry level tower CPU Coolers like the Vetroo V5 all go for about 25 USD-35 USD. I just really wish that the builders would have opted to install a tower cooler instead of the subpar thermaltake ux100 (they are only about 10 usd more expensive than the ux100) Overall, I am pretty satisfied for what I paid for, 5/5 :)

Cons: I have 1 con...This will be the biggest part of my review. When I received my package I ran home and opened it up...and I have no idea how this happened but the CPU fan was lose...it freaked me out for a second. I noticed that the 2 top screw were missing that hold the CPU, maybe shipping or the construction of the PC itself caused this to happen....But found them and had to remove a few things to get it secured again. The PC is up and running. I called my friend to see if I needed to add thermal paste, I sent him a picture and he said I should be fine....I will be getting some thermal paste just to be safe though. Other than that the PC is great.

Overall Review: I've only had it for 2 hours...so far so good.

Cons: If you're going to buy this, buy a different CPU cooler along with it. The stock cooler cannot keep the CPU under 90 degrees Celsius.

Overall Review: I am beyond impressed with this PC. I decided to go prebuilt this time instead of building with the difficulty getting graphics cards at MSRP. I upgraded to this from a Ryzen 5 3600x and a 5500XT, and I could not believe the difference. I get at least 25% more FPS than my last build, and thats going from 1080p to 1440p, so its smoother even at the higher resolution.

3 out of 3 people found this review helpful. Did you?
Manufacturer Response:
Hi, Thank you very much for supporting ABS, we appreciate you taking the time to provide your feedback. If you have any suggestions or concerns please write us as well! We strive to make our products better. If you have any questions about your product please feel free to contact customercare@abs.com or call us at (800)685-3471. We will be glad to answer all your questions in a timely manner. Thank you again, ABS Customer Support
Mingda Y.
Ownership: 1 week to 1 month
Verified Owner
Great service and product9/11/2021 11:02:57 AM

Overall Review: The first device I received has a power issue, and keeps power off every couple of minutes. I called the customer service, and they set up a replacement order just in 5 minutes! The replacement was delivered with first class air mail and arrived in 2 days! The 2nd device works all well, everything is great so far. Best customer service ever

Cons: It's a prebuilt. CPU cooler is barely better than stock and I/o shield installed wrong

Overall Review: The computer runs flawlessly. My only real complaint is that they didn't install the I/o shield correctly. Some of the tabs are blocking my USB-c and USB3.0 ports.

2 out of 2 people found this review helpful. Did you?
Manufacturer Response:
Dear Zach, Thank you very much for supporting ABS Computers. We appreciate you taking the time to provide your feedback! We strive to make our products better, so I have forwarded your concerns to our assembly team! If you have any questions or suggestions about your product, please feel free to contact customercare@abs.com or call us at (800) 685-3471. We will be glad to answer all your questions in a timely manner. Thank you again, ABS Technical Support
Rafael M.
Ownership: 1 week to 1 month
Verified Owner
Computer is great and I loved, but...9/8/2021 9:55:46 AM

Overall Review: Memory max speed recognized in BIOS 2666 and not 3000 as in the description. I still needs to figure out if there's a motherboard's maximum threshold set to 2666. Other than this minor thing everything else it's amazing.. looks good and perform good.

2 out of 2 people found this review helpful. Did you?
Manufacturer Response:
Dear Rafael, Thank you very much for supporting ABS Computers. We appreciate you taking the time to provide your feedback. The memory speed notate is the default settings in motherboard BIOS. Please enable the "XMP" Setting. Under DRAM Status (Choose Enable or Profile I or II), to have the motherboard run at the rated clock speed of your memory (3000mhz) If you have any questions about your product please feel free to contact customercare@abs.com or call us at (800) 685-3471. We will be glad to answer all your questions in a timely manner. Thank you again, ABS Technical Support
Anonymous
Ownership: 1 week to 1 month
Verified Owner
Very easy to unbox and set up.10/6/2021 4:32:08 AM

Overall Review: The PC arrived a couple DAYS after it was ordered, which I am very pleased with. No connections out of place and has been working fine since initial startup. Very pleased with this PC.