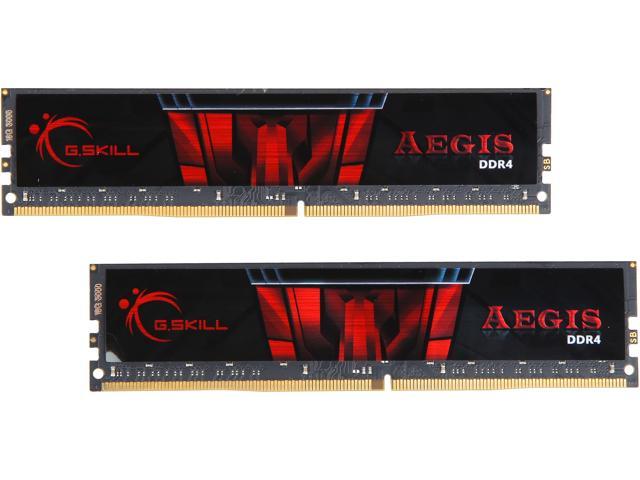 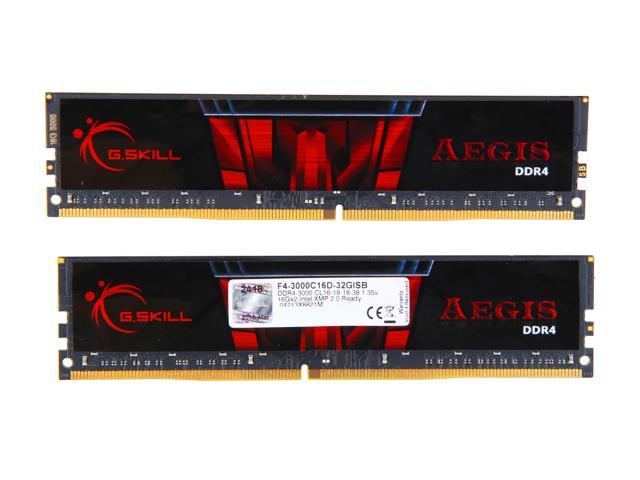 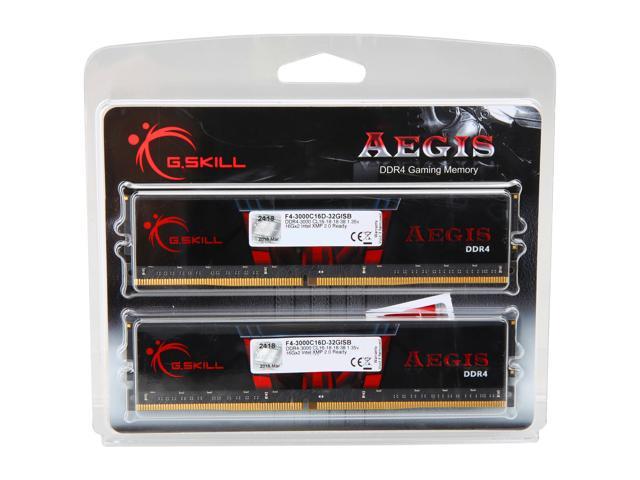 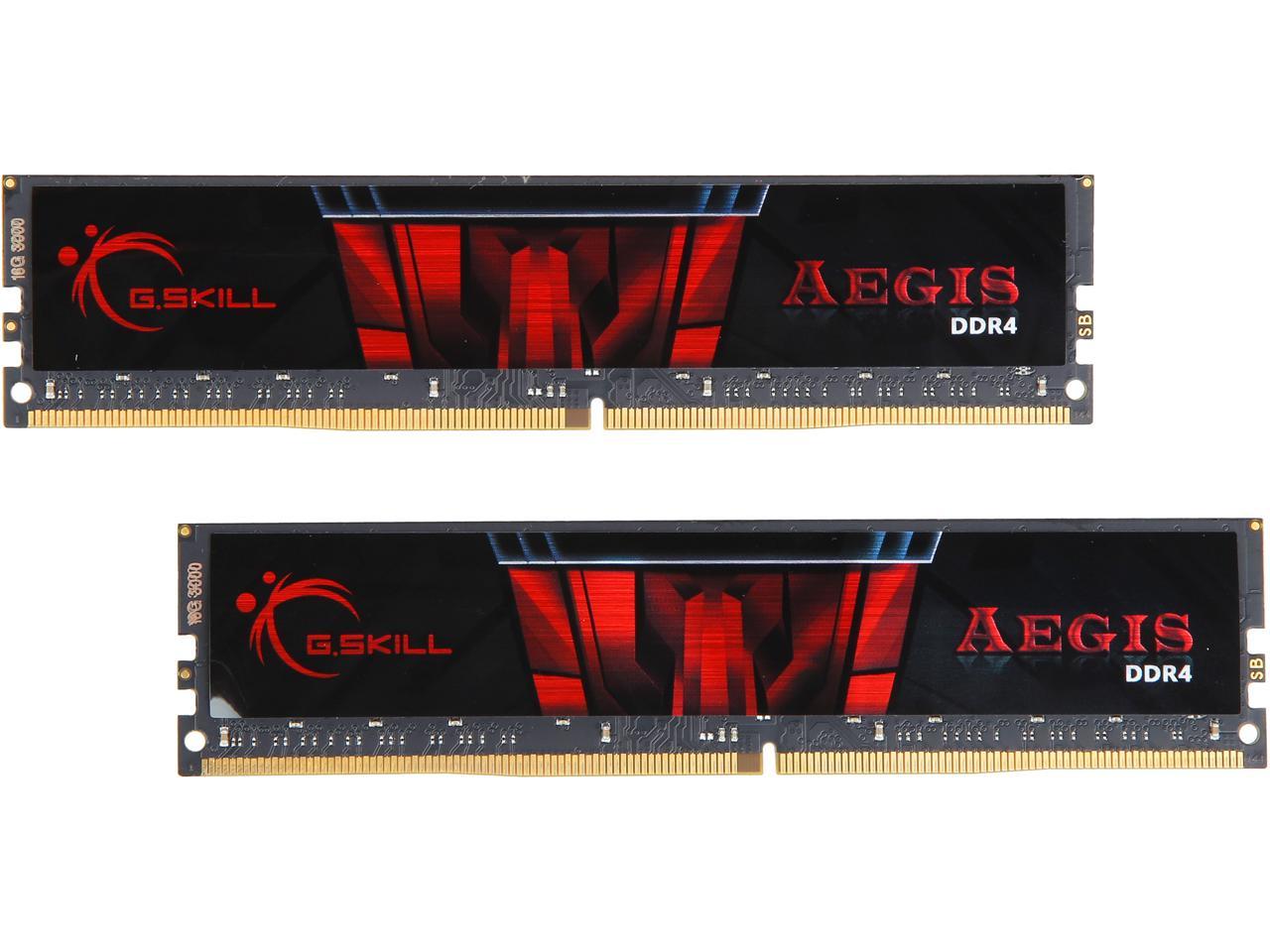 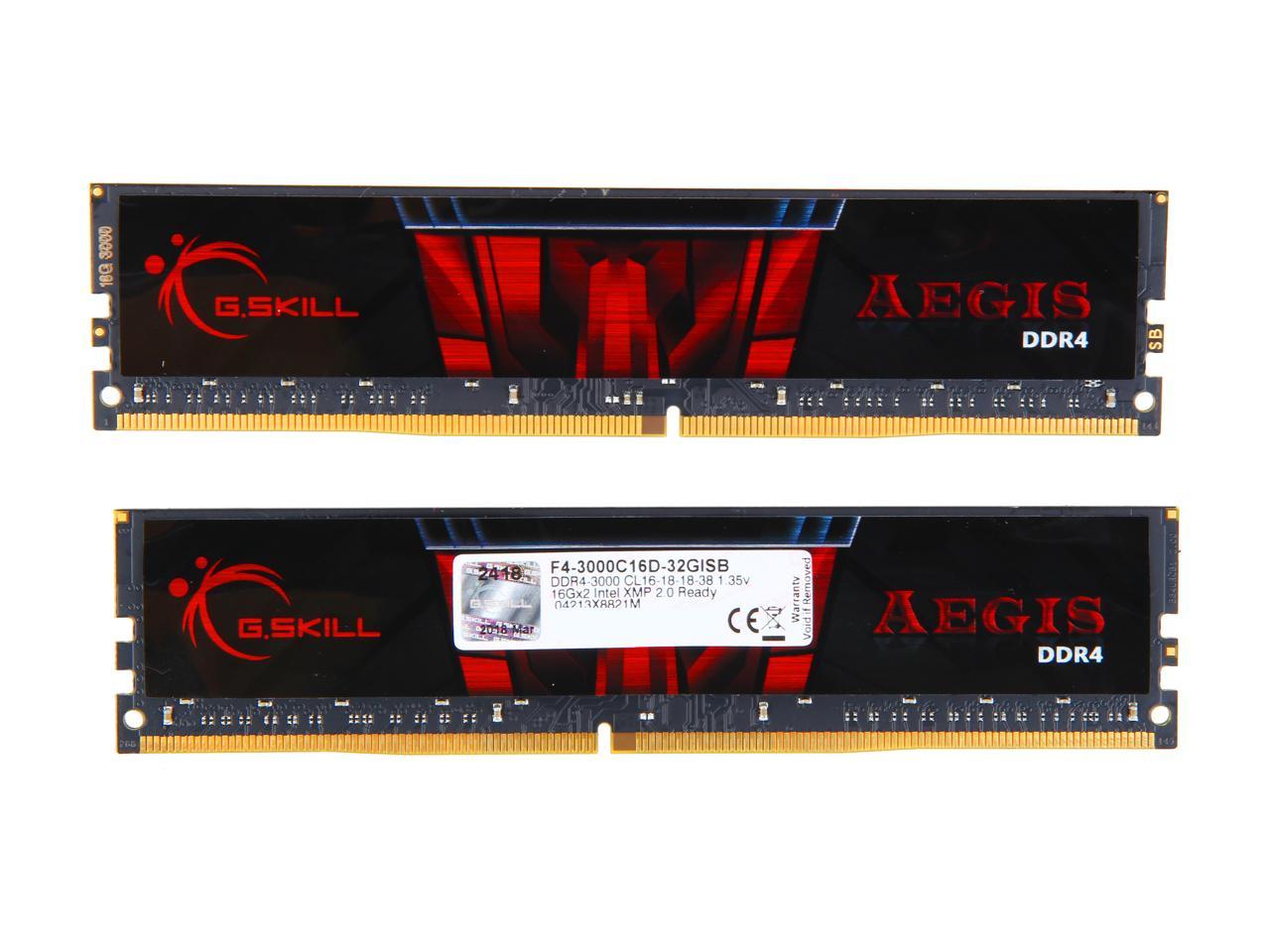 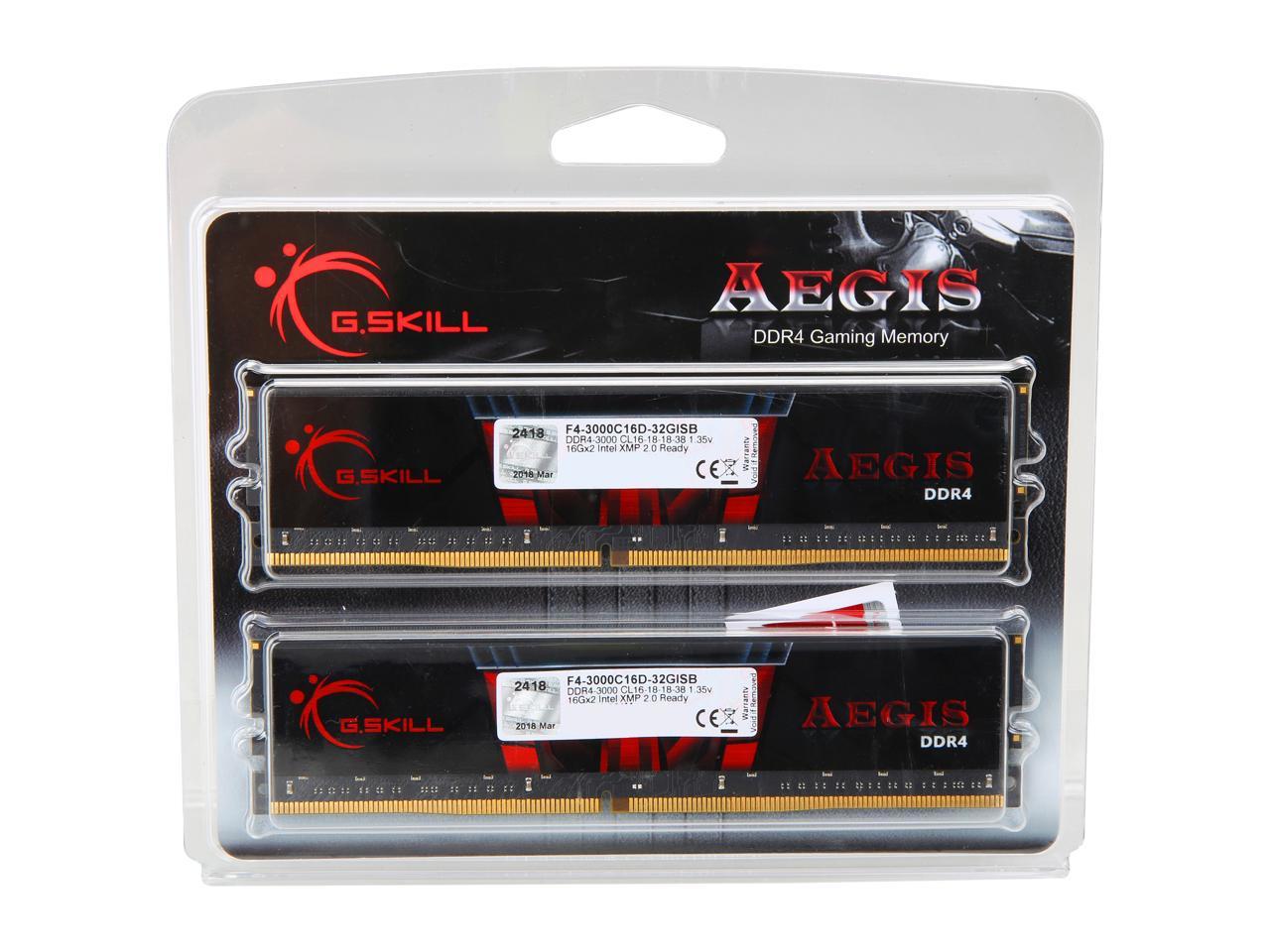 Free Shipping on This Item! When you spend ₪650.00 or more on eligible products. restrictions apply. The Ideal Solution for Gaming PCs

Built with the finest components and tested under the most rigorous conditions, the AEGIS DDR4 gaming memory is designed for upgraded performance and high stability on the latest PC gaming systems. It improves responsiveness and reduces latency of your system, providing the muscle needed to smoothly run games. Whether it's FPS, RTS, MOBA, or MMORPG, G.SKILL Aegis DDR4 gaming memory will unleash the true powers of your gaming system. G.SKILL Aegis DDR4 memory is available in speed ratings ranging from standard DDR4-2133 MHz to clipping DDR4-3000 MHz. It is compatible with the latest Intel Core processors and adopts cutting-edge hardware technology to unlock the biggest data bandwidth for jaw-dropping gaming performance. Just pick the memory you want and enjoy the pleasure of silky-smooth gameplay. Each and every component is built with the highest quality of hand-selected ICs and tested with G.SKILL’s rigorous validation process to ensure the best-in-class performance, reliability and compatibility across the widest selection of motherboards. With the support of XMP 2.0, you can easily overclock your memory to get even higher performance with just one click.

Pros: - Works as advertised. - Low profile. - No problems with the fit in the slots. - If you know how to set the XMP speeds on your motherboard it's a set it and forget it kind of thing.

Cons: - Stickers on the RAM seem a bit tacky. May as well have left it naked. - Little/No overclock headroom. If you're an ultimate tweaker kind of person I wouldn't recommend this set.

Overall Review: I've had no issues with this RAM set since I purchased it 3 months ago. I'm running a Core i5-8400 in a Z370 chipet MoBo. Which could probably account for my more positive experience than some others that have been struggling with Ryzen chips. So, if you're going to run an Intel setup you should be fine with this RAM. I did try to push the RAM little bit, just pushed it up one notch on the MHz to 3200 and loosened timings a bit and it refused to work. Didn't think it was worth tinkering further if it wasn't going to take a small step up. No skin off my teeth seeing as how all reviews I've looked at with the Z370 chipset show that over DDR4 3000 you see very diminished returns, if any at all. As far as heat spreaders are concerned, I've done a bit of reading online and it seems that RAM really doesn't need a heat spreader at all, even overclocked. The heat created by RAM is minuscule. It's really just for pretties than anything. Don't just take my word for it, though. I recommend either doing some measurements of your own or go do some research.

Overall Review: i would not recommend this product but the company itself isnt bad and ram can sometimes be bad. Would like replacement ram as i bout 4 8gig sticks for a total of 32gigs.

Manufacturer Response:
. Hi Brent We are sorry to hear a module failed so soon. Unfortunately memory error can be very random, however all G.Skill memory kits are backed by a manufacturer lifetime warranty to protect you from this possibility. Submit the RMA form online, send the memory kit to us and we will gladly send you new replacements. For any questions or concerns, please feel free to contact us directly. Thank you for choosing G.SKILL Quality and customer service are our top priorities. To check or report a technical problem, please visit the Official G.Skill Technical Forum: https://www.gskill.us/forum Tech Support Email: ustech@gskillusa.com RMA Dept Email: rma@gskillusa.com

Anonymous
Ownership: 1 week to 1 month
Verified Owner
Specifically bought this because it DIDN'T have a heatspreader6/1/2020 2:02:38 PM

Pros: The sticks worked perfectly out of the box with my Ryzen 3600 build. The people on here complaining about the lack of a heatspreader are delusional. Have you seen the ram inside of a modern server? Inside of a modern high-performance workstation? They never have anything on them. Modern ram does not make enough heat to require a heatspreader. Electronic components are designed to heat up to some degree with no change in performance.

Cons: The red Aegis sticker over the entire ram stick is a bit much, but I prefer it over the bulky heatspreaders.

Overall Review: If you're looking for no-frills, cheap ram, this is for you.

Pros: -Low profile due to the lack of heatsinks. Will fit under bulky CPU coolers. -Great cost/performance ratio.

Overall Review: At the end of the day, RAM is RAM. 2400+ MHz sticks give no discernible performance boost compared to these 2133 MHz sticks, so don't bother.

Pros: I put it in my system and wammo it had RAM Good price

Cons: none to think of

Pros: 3000 speed worked fine for me with ryzen 1600 in MSI b350 pc mate. Just remember to update your bios Cheapish and no clearance issues

Cons: Price bumped up a tad before I pulled the trigger on my new build. Oh well

Overall Review: Probably going to buy a 2nd to have 16gb

Cons: When I opened the package, I was immediately disappointed to discover that what looked like a heat spreader in the picture turned out to be just a cheap sticker. G.Skill does not guarantee two kits of RAM to work together. So if you are hoping to use two of these kits on a MB that supports 4 x 16GB RAM, you would be better off buying a single 4 x 16GB kit instead. It would alleviate so much confusion for buyer's who don't know how OC'd RAM works if manufacturers would start listing how OC'd RAM works on the packaging and in the details. This is something that all RAM manufacturers are guilty of.

Overall Review: For those who don't know how OC'd RAM works. It is usually set to run at JEDEC (non-OC) speed out of the box. You usually have to go into the UEFI BIOS and manually set the bandwidth, timings, voltage, and command rate, or select XMP (if you have a MB and RAM that both support XMP) to get it to run at the advertised OC'd speed. If you are not familiar with setting up OC'd RAM contact the manufacturer. Many OC'd RAM sets have less than five egg ratings from system builders who don't understand that OC'd RAM usually needs to be setup in the UEFI BIOS, so they assume there is a problem with the RAM when there isn't. I only used this RAM kit for a couple of weeks. I've since upgraded to a 64GB kit of G.Skill Ripjaws V Series DDR4 2400. System Information: ASUS ROG Maximus VIII Hero Alpha Z170 Intel i7-6700K Zalman CNPS9900MAX Arctic Silver 5 EVGA GeForce GTX 670 SC 4GB 4 x 16GB G.Skill Ripjaws V DDR4 2400 2 x Seagate Constellation ES.3 2TB SATA3 HDD in RAID 1 2 x ASUS BD-RE Burner Corsair AX1200i 1200W PSU Cooler Master HAF X Full Tower Case Windows 10 Pro 64-Bit 4 x ASUS VS247H-P 23.6" LED Backlight Monitor

Manufacturer Response:
. Hi Steven Thank you for your G.Skill purchase and review. Glad to hear you were able to set up the RAM and it is working well in your computer. With XMP enabled, the motherboard can detect the performance values of the RAM and automatically set them for you to run at full speed. This is an ultra low voltage memory kit so a heat spreader is not necessary. The modules will remain very cool even with overclocking. We apologize for any confusion about the heat spreader as it is absolutely not our intention. Should you have any further questions or concerns, please feel free to contact us directly. Thank you GSKILL SUPPORT Quality and customer service are our top priorities. Tech Support Email: ustech@gskillusa.com RMA Dept Email: rma@gskillusa.com G.Skill Forum: http://www.gskill.us/forum/