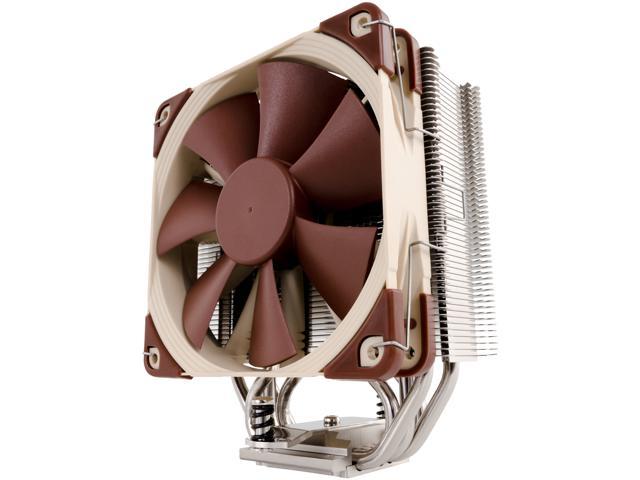 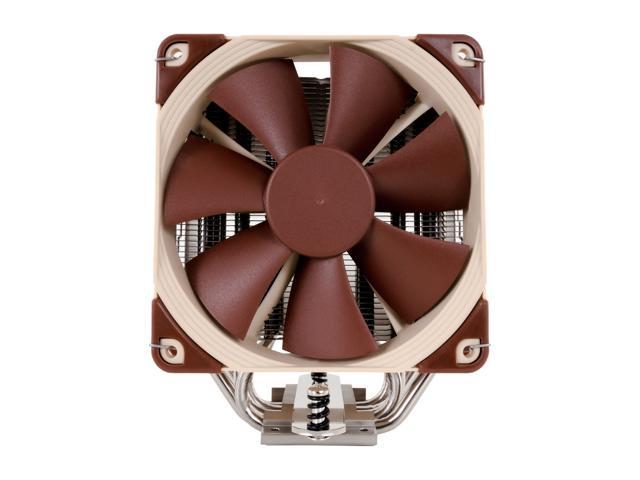 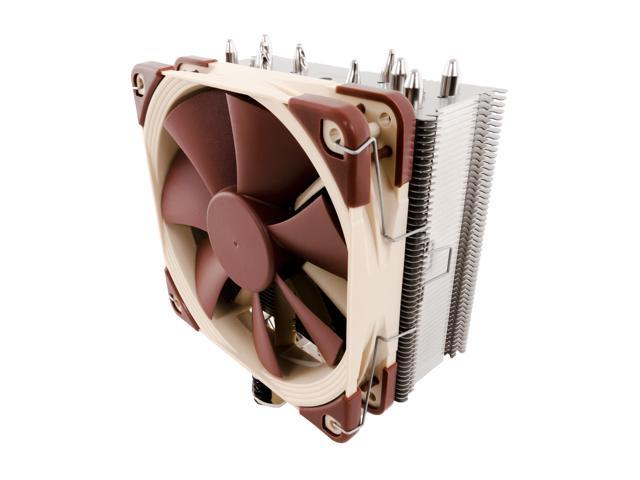 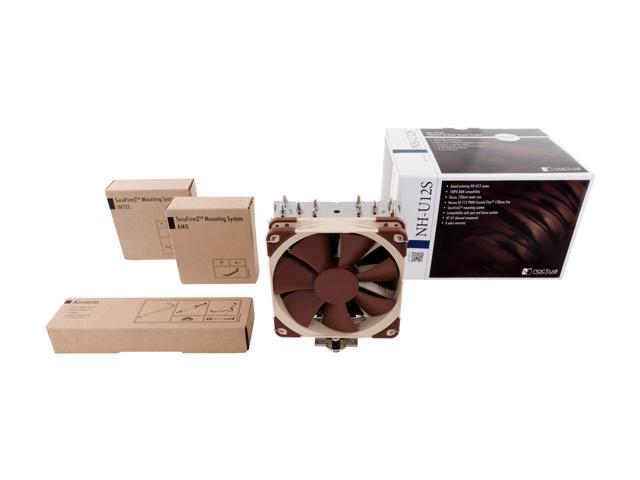 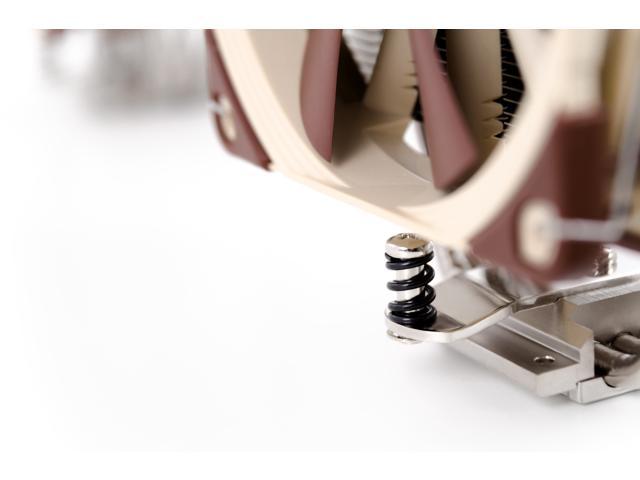 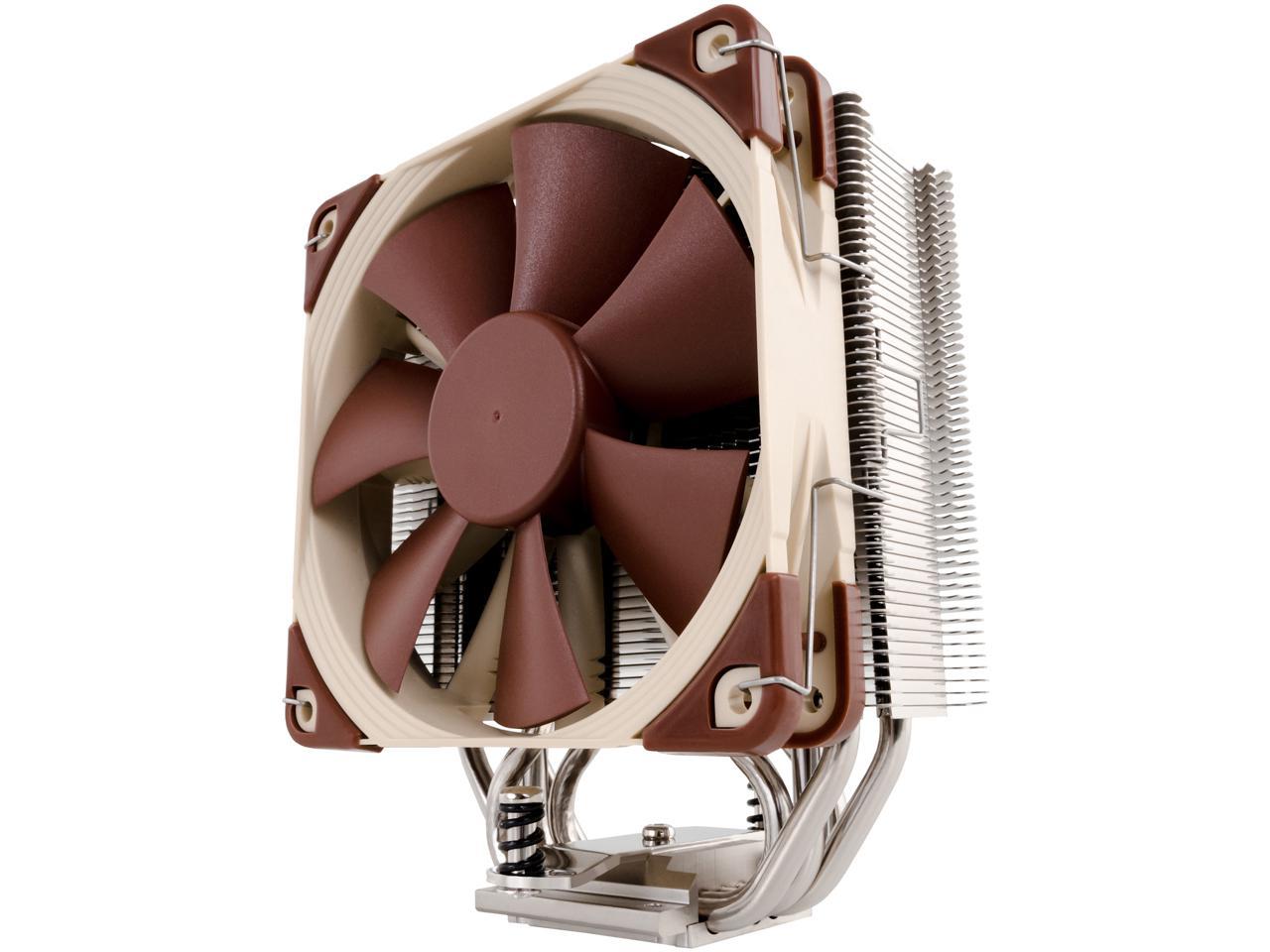 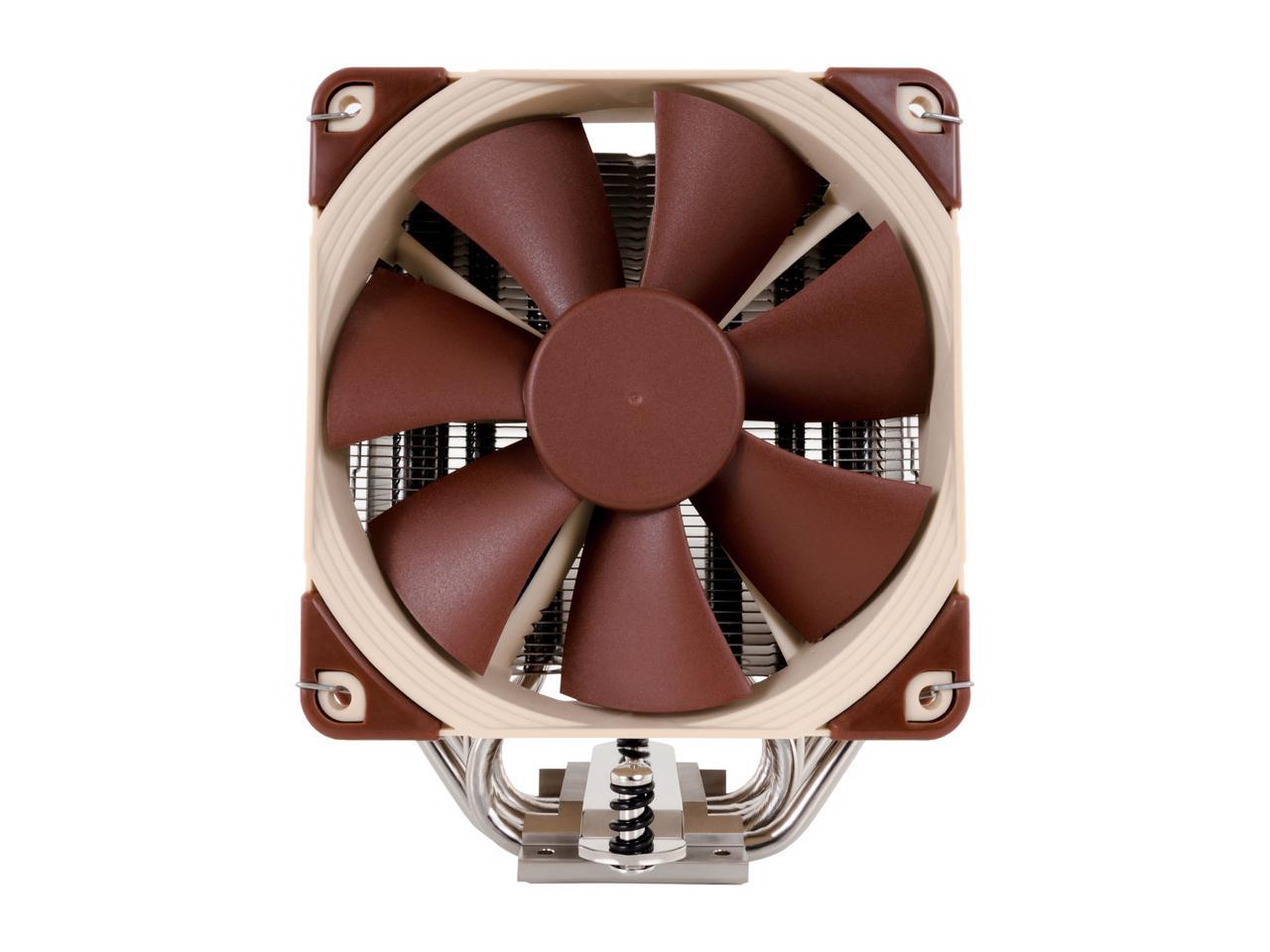 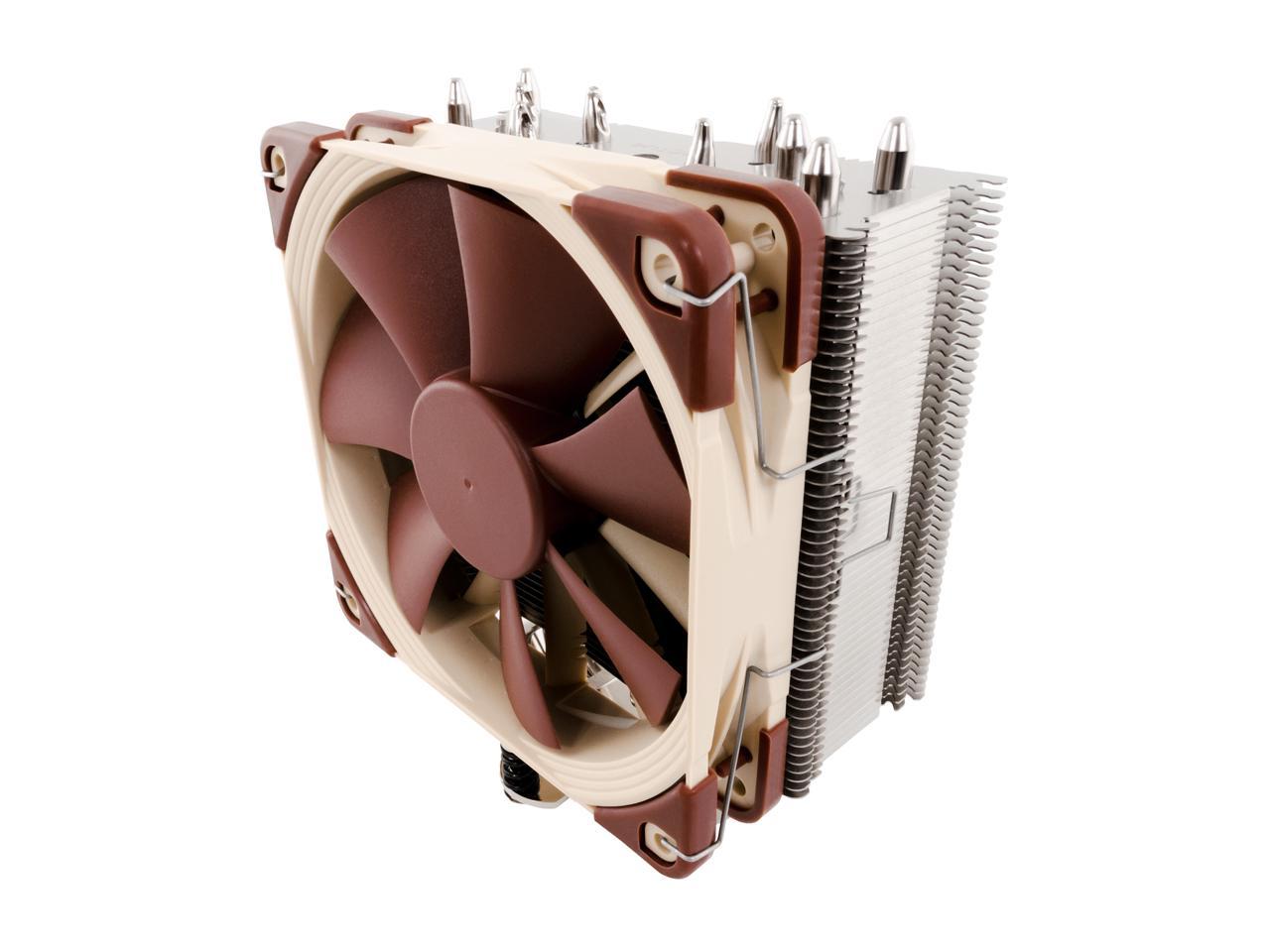 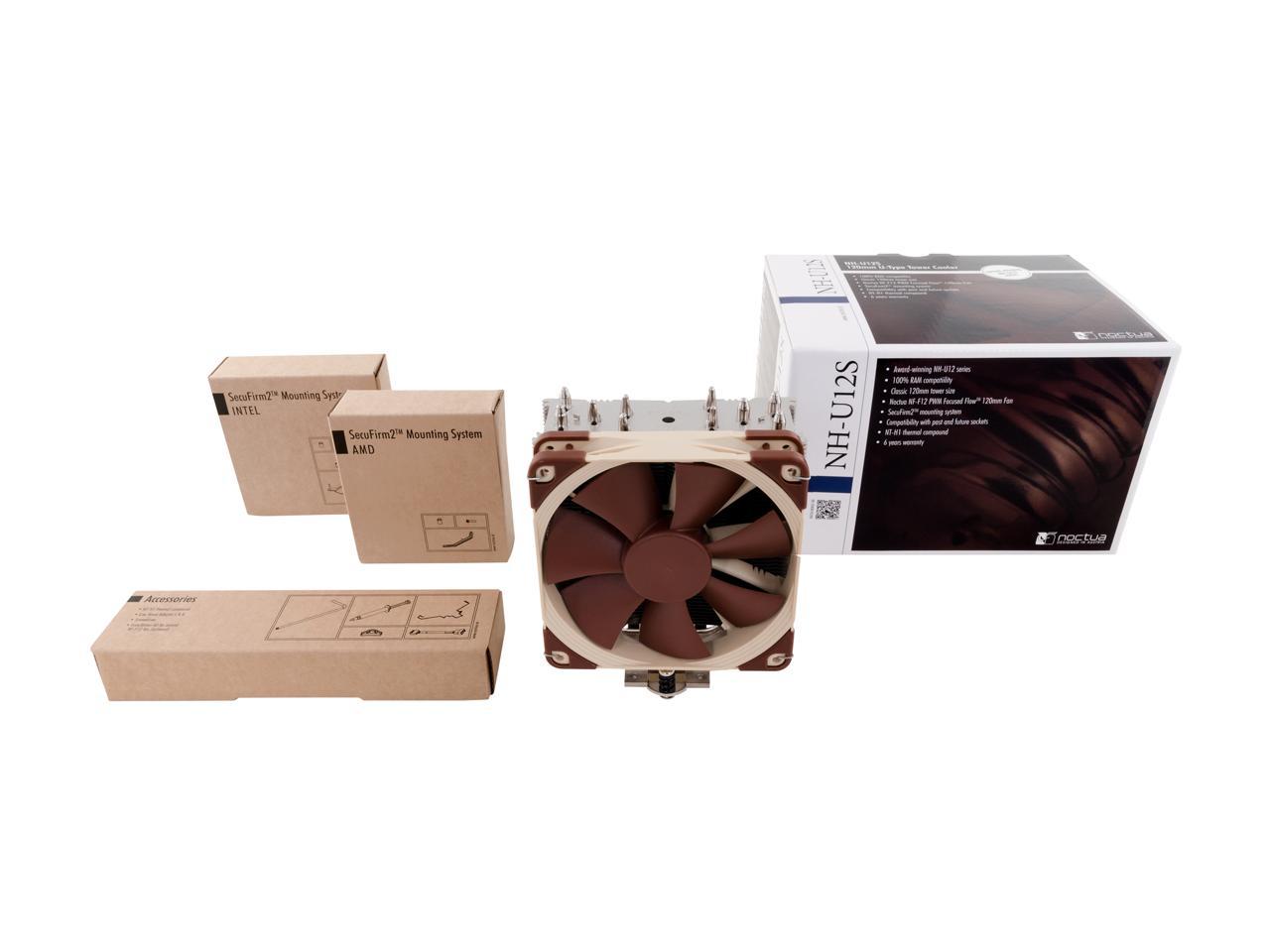 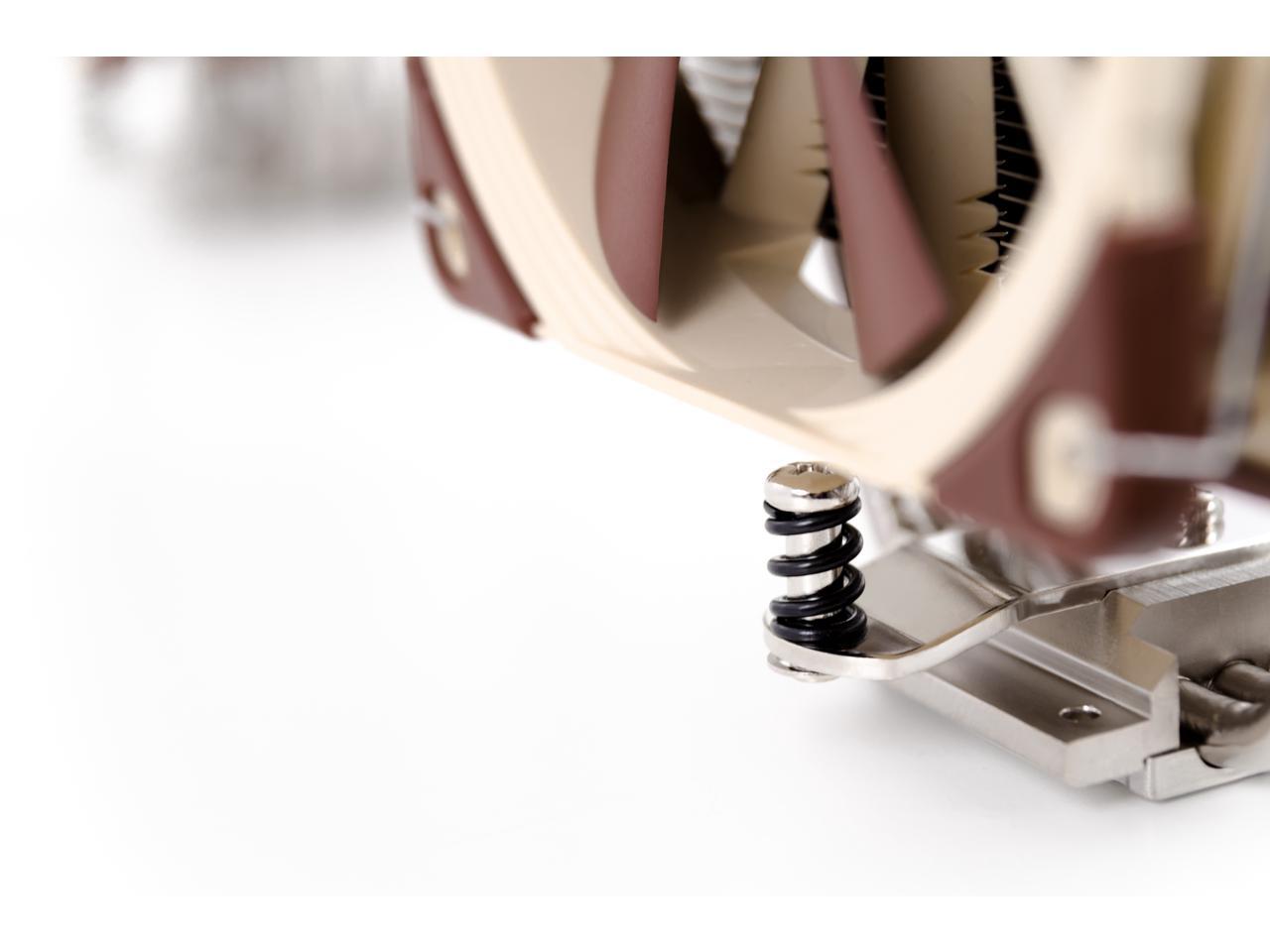 Learn more about the Noctua NH-U12S

Pros: Easy to install if you've installed an aftermarket cooler before. Noise? At load this is as loud as my stock Intel OEM CPU cooling fan at idle. Very quiet if you're looking for as little sound as possible. Smaller than I imagined it would be. Includes additional bracket & noise isolation pieces for a second fan if you so choose. I don't OC, and the cooling with the single included fan is sufficient for my needs (push configuration to the back of my case & it's exhaust fan).

Cons: Fan isn't the prettiest color, but I don't have a window so it doesn't bother me. Fan has a directional arrow only on one side, so you need to hunt for it. Power cable is relatively short. Pay attention to the metal brackets that hold the fan to the cooler. It was late at night and I was tired, so I didn't realize that I wasn't putting the bracket onto the cooler correctly until about 5 minutes of cursing had subsided. Instructions say to put the cooling compound onto the heatsink, but the picture indicates putting it onto the CPU (put it on the CPU).

Pros: I am a huge Noctua fan, there are others that are as good don't get me wrong, but Noctua has been great for me over the years and I tend to be loyal to a company for as long as they keep doing the right thing You might be wondering why I selected the 120 MM cooler in 2015 when everyone is using 140mm fans and the reason is that coolers have started to get too big and my current case would be too tight a fit. The NH-U12s is only 148mm tall with the fan which give me plenty of clearance in my case, it also doesn't interfere with my ram and gives plenty of room for the top PCIe slot The heatsink is packaged very well and comes with everything you need to install including extra hardware should you buy a 2nd fan. It comes with very good Thermal compound so you do not need to go order some MX4. Install was easy and the temps were great, the fans push a lot of air, have a great static pressure rating and are quiet. Fans have rubber pads to reduce vibrations

Overall Review: Unless you really need better colors or your case is too small to fit this, it is the best 120mm cooler you will find.

Pros: I was dumb and bought a pre-built PC from Best-Buy. The tower it came with was only good at trapping hot air in the PC, causing it to overheat CONSTANTLY. I bought this along side one of the Fractal towers and already I'm seeing a HUGE dip in temps, from an average 50-75 c to 25-35 c while idle/using chrome. The kit comes with most of the things you need to assemble it, having thermal paste was also a nice touch. The only trouble I had with it had everything to do with the design of my motherboard (Pre-built PC problems), not the Cooler, but I managed to resolve it with some tinkering. This thing is also really quite, so quite I thought I did something wrong when I booted up my PC.

Cons: Ugly, no fancy lights, but I'll take performance over looks any day. My wife thinks it's enduring, almost vintage looking. This PC is already a Frankenstein mess anyways...

Overall Review: Would recommend. Sorry if this review isn't informative enough, I'm just really happy with what I got.

Pros: Absolutely silent. Not even a hint of thermal issues on my i7-9700k (stock clocks for now).

Cons: So good it has caused me to shell out even more money to Noctua for more of their fans and heatsinks. :(

Pros: Purchased and it arrived so fast I wasn't even able to build anticipation. The packaging was solid, simply foreshadowing the product within. So easy to install, haven't modified a computer in years, take the stock cooler off, clean the thermal paste, glance the install guide for a few seconds to familiarize with the bracket placement directions. Once the brackets are on, place the thermal paste, seat the heat sink onto the brackets, evenly tightening all four fasteners. Give the two tension screws (ones with springs) a firm push as you screw, otherwise they won't go into the threads and you will start to think something is wrong, all that is wrong is your lack of manly hand strength, CS:Go doesn't build that and neither does Xvideos. Don't forget to make sure your fan for the heat sink is in the proper direction blowing heat towards the exit fan, mine blows to the back of my computer allowing my exhaust fan to carry the heat out immediately. On GTA-V with the I7-8700 with a 2080 8g OC card totally maxxed, my CPU runs at a steady 20°c cooler than before, my card even runs cooler because the heat sink and fan actually sits so close to the card it pulls air over the top of the GPU, creating a more solid air flow direction than the stock cooler that literally pulls hot air onto the CPU from the heat being put out by the GPU. Idle Temps are semantical, they always run cool, and games like CS:Go don't even make the computer get warm. Temps for the CPU were running at a peak of 80°C under heavy load in GTA-V before, fluctuating of course, now it has trouble reaching 60°c.

Overall Review: Would recommend, this is the perfect size, the brown color doesn't look as bad as you would think, with Rgb in mine it actually plays in well, and honestly I enjoy the cream color and brown. I have 4sticks of ram and it doesn't get in the way at all, quality product.

Pros: When compared to Noctua's larger twin tower coolers, such as the NH-D15 (of which I have running on a i7-4790K system), this is a breeze to install! About 15 minutes of work for one who has built (or upgraded) systems to Noctua CPU coolers, provided there's an opening behind the MB to install the Noctua backplate (many AMD AM3/AM3+ owners won't need this step). Perhaps best of all, no scraped knuckles from having to remove a center fan of a NH-D15 (or similar) to install! Clearance is better than some similar looking Cooler Master CPU coolers, another of which I own & had to swap to the same fan the NH-U12S has. In other words, after the fan upgrade, could be owning another of these, for less. Plus as mentioned about clearance, this gives a bit more room to work with, in a not so roomy Rosewill GUNGNIR X mid tower case. Much more so versus the NH-D15, which likely wouldn't fit & if it did, (most of) the rest of the system had best be pre-assembled, including the cooler. The Noctua NH-U12S is simply a very effective cooler at an affordable price. As usual with Noctua coolers & for those who has owned one or more, the NH-U12S package is well organized & tightly packed, to prevent shifting & the cooler itself is padded to prevent damage. Plus the usual goodies which the rest of the Noctua family has, their own NT-H1 thermal paste, enough for 10-12 clean/repaste jobs (less is more), plus for installing this one. A PWM splitter if needed, and well organized. When opening the package, it's immediately obvious which box of small assembly parts to open, be it AMD or Intel. Most AMD owners won't need the rear backplate, as there's (usually) already a metal one installed on the back of the MB. In this case, the install will be a 10 minute upgrade! For those who desires to add an extra NF-12 PWM fan, an extra set of clips are in the box. However, in my usage of Noctua coolers, the extra fan usually isn't needed, at best, knocking off 1-2C for $20. Overclockers will be those who truly sees the difference by the addition of a 2nd fan. If so, be sure to install in the same direction as the included one, the hot air dispensed should be pointing towards the exhaust. BTW, mine's set to run at 100% all the time & can barely hear the 120mm NF-12 fan running. Even with my i5-4690K running at 4.2GHz synced across all cores (0.7GHz higher than base) and only the single fan, max temps usually in mid to upper 50's, lower 60's during a rare Prime95 run. Idle is around 26-28C. When needed, I keep a couple extra NF-12 fans hand to be prepared. 6 year warranty, so for those who runs a 24/7 system, or 12-16 hour days, no worries, Noctua has you covered with their generous protection. This is one of the initial reasons why I first went to Noctua. Pay a little more now, spend less down the road. Basically, other then cleaning and a repaste every 2-3 years, the NH-U12S is plug & play!

Cons: As usual with Noctua, no bugs or defects, so no cons!

Overall Review: Yes, I would purchase the Noctua NH-U12S again (will upgrade a couple more PC's in the upcoming months) & I recommend this cooler to anyone where it fits inside of the case. Be sure to measure from the bare CPU to the case door to determine compatibility. Finally, for now, the Noctua NH-U12S has kept me from having to delid the i5-4690K, hopefully until it's time to clean & repaste the unit. Had I known of the power of the NH-U12S, probably would be in my i7-4790K system, although being overclocked, with the extra NF-12 PWM case fan. I believe it would do just as well of a job for less cash & will be using this cooler with most any system from here on out, provided it fits the case. Better yet, will make sure any case purchased will work with this outstanding CPU cooler! Purchase & enjoy your Noctua NH-U12S CPU cooler, just as I am. As long as case is well ventilated & paste properly applied (not too much), make hot running CPU's a thing of the past!

Pros: With the fan in front, pushing air through fins toward the back, there's room for literally any size ram. Running at 700rpm, I literally can't hear it with the case open. Comes with literally everything you'd need. Very low profile for a serious HSF. Something else with the word "literally".

Cons: Included thermal paste is very thick. Adding a 120mm fan to the back will be impossible for most mobos with built in heat sinks, as the fans and fins sit very low. It's so very, very ugly.

Overall Review: Grandma would be proud.