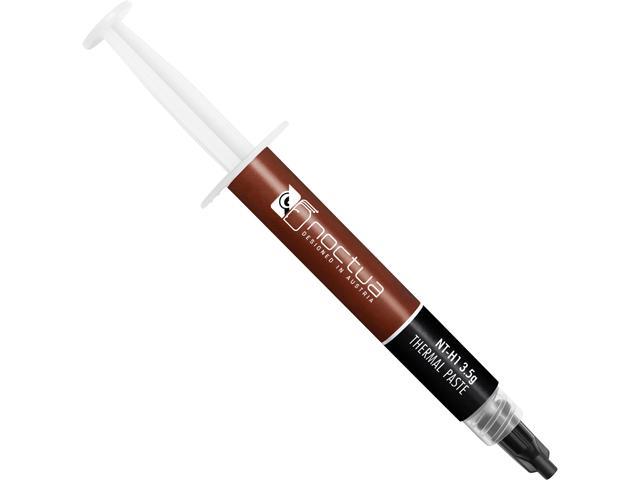 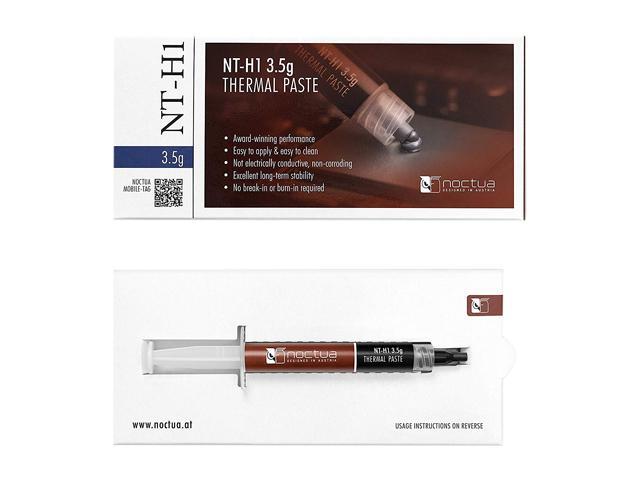 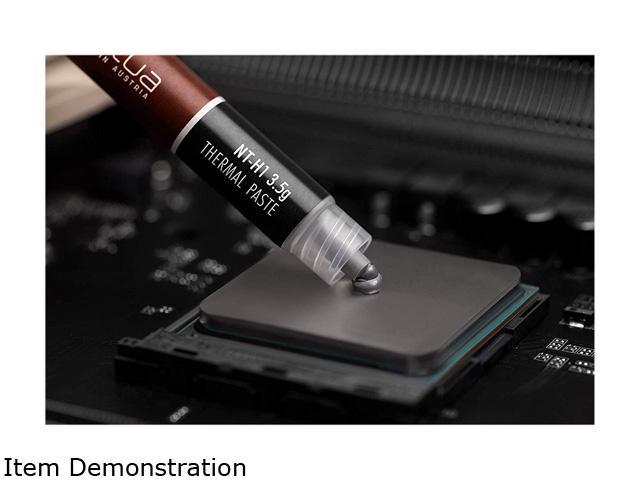 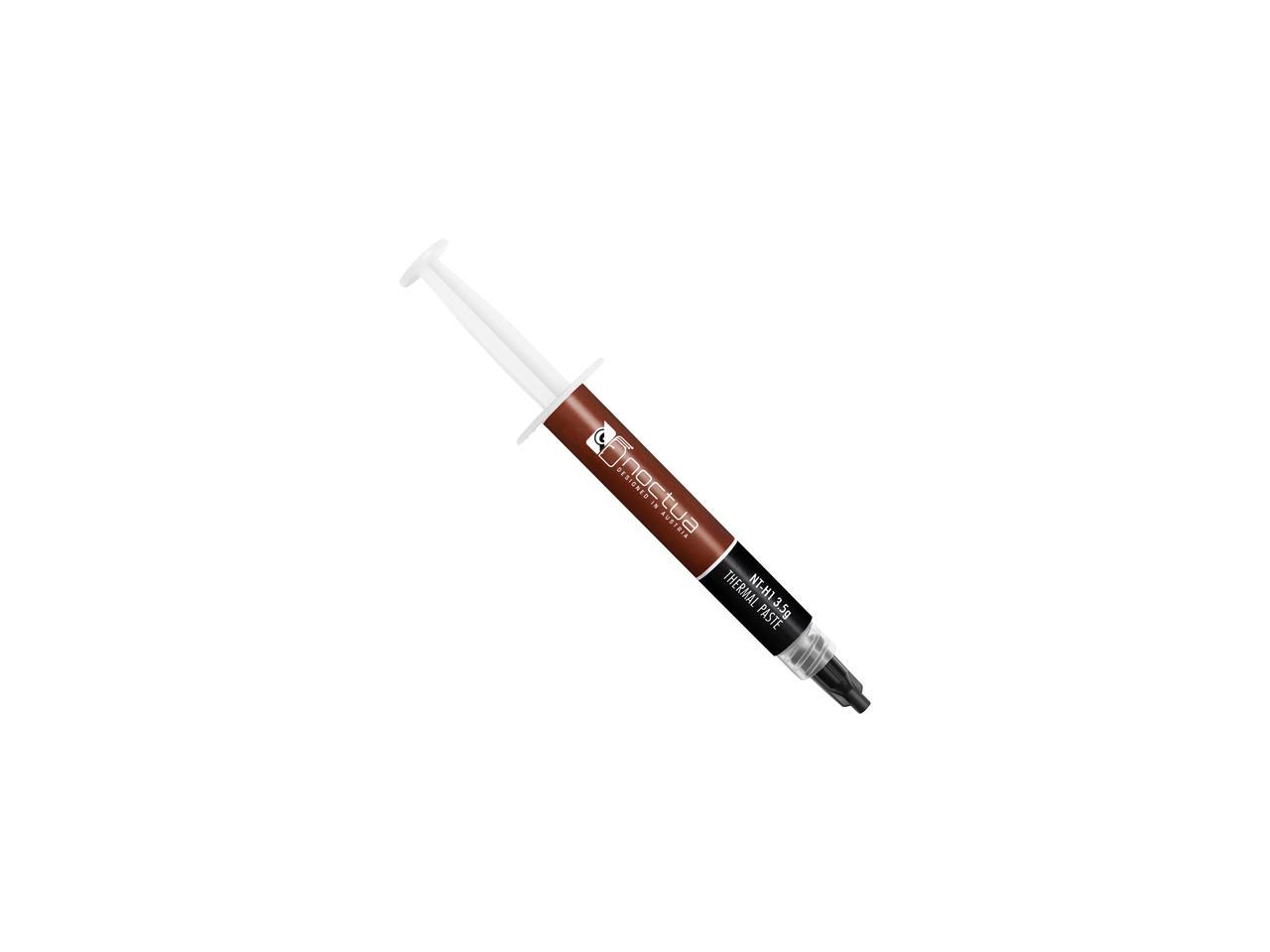 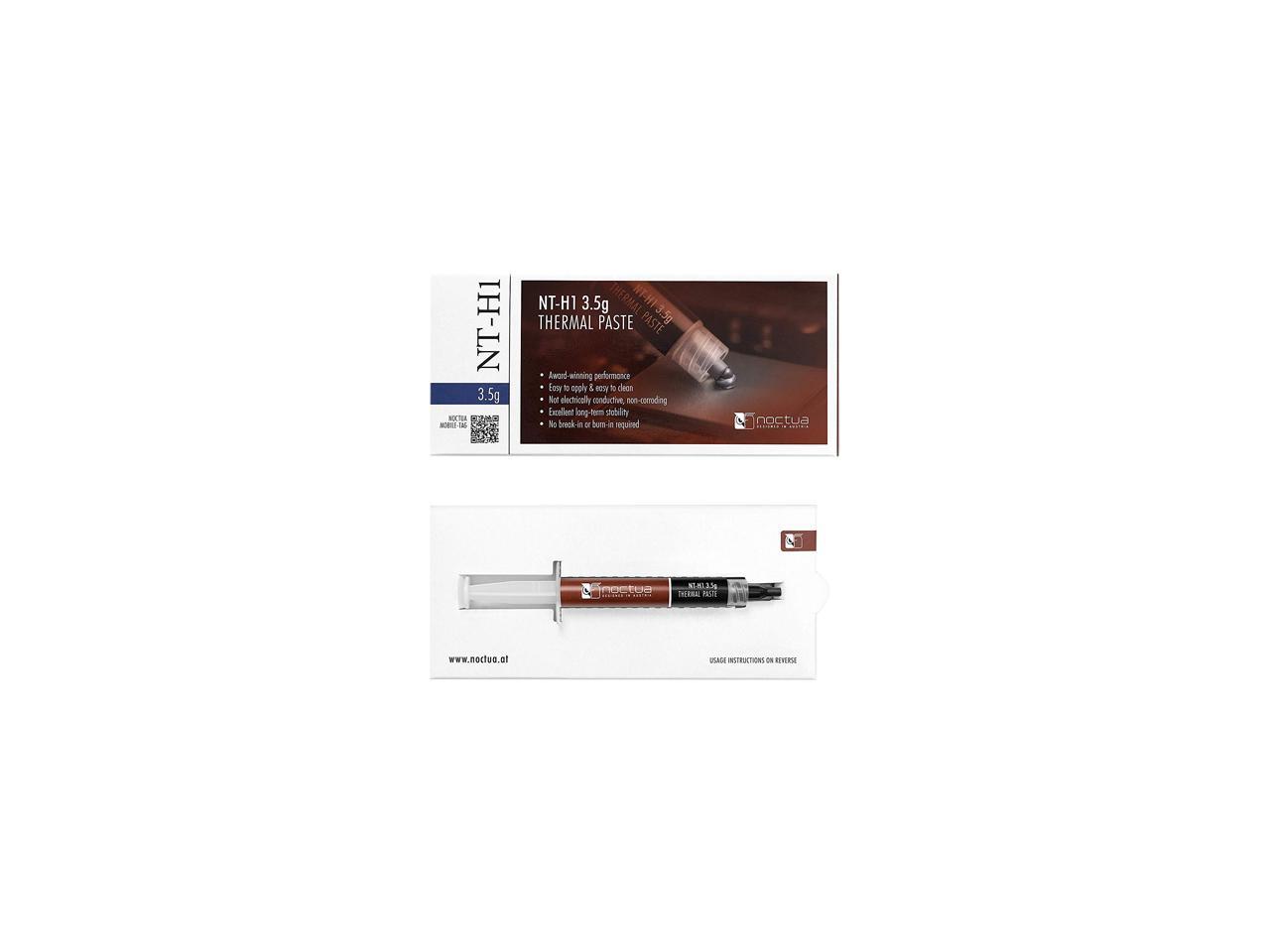 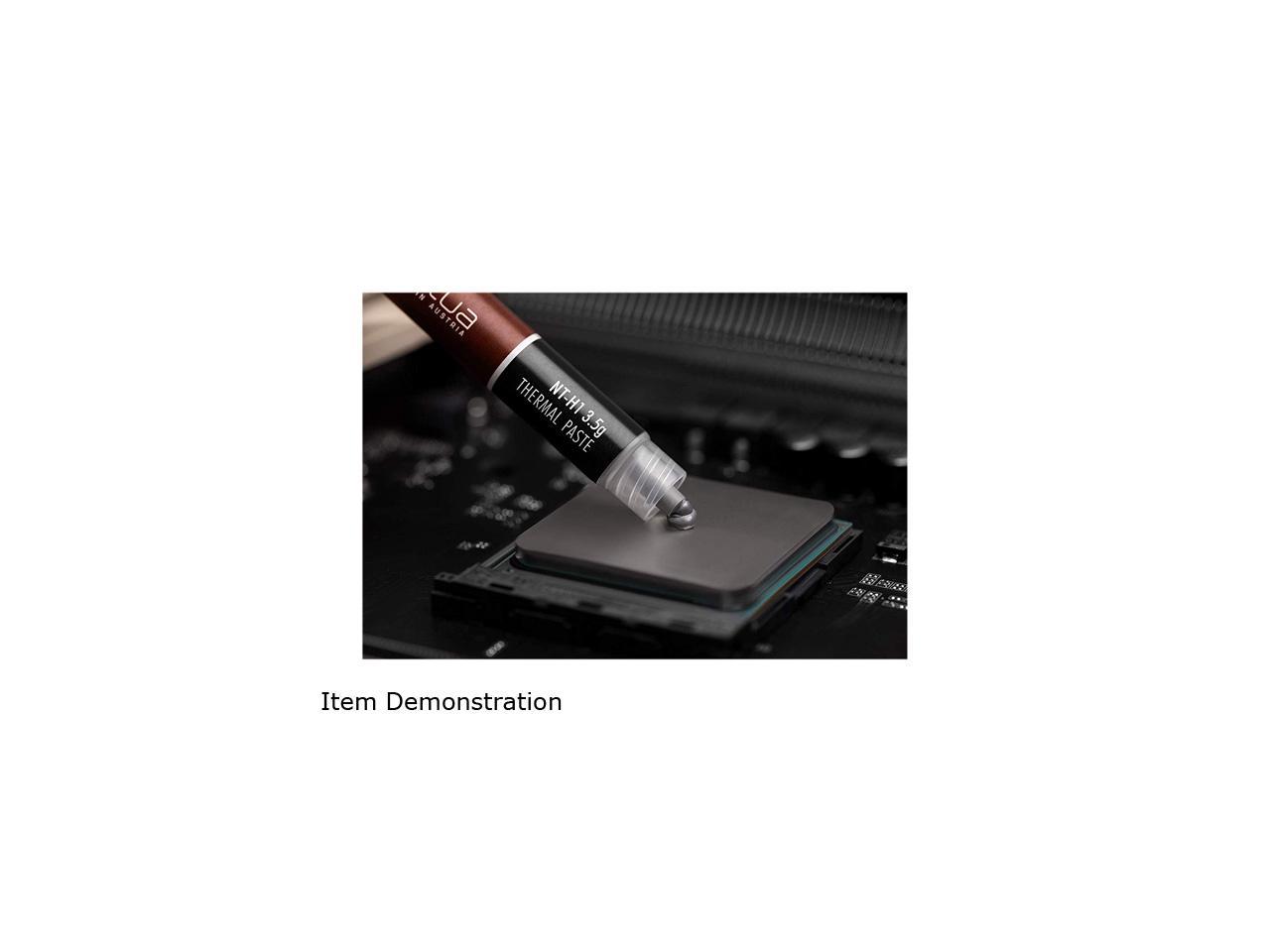 The Noctua’s NT-H1 thermal compound is ready to go right away after being applied, no break-in or burn-in required. It offers excellent performance and outstanding long-term stability without the risk of short-circuits. Whether it’s air- or water-based cooling, CPU or GPU applications, overclocking or silent systems, the NT-H1 always delivers great results, making it a must-have for overclockers and hardware enthusiast users.

Bundled with Noctua’s premium-grade CPU coolers since 2007, NT-H1 has proven its excellent performance in countless of tests and reviews. Chosen again and again by overclockers and hardware enthusiast around the globe, it has established itself as a benchmark for premium-quality thermal interface materials (TIMs).

Thanks to its excellent spreading properties, there is no need to manually spread NT-H1 before installing the cooler: Simply apply some paste onto the CPU (see instructions for details), put on the heatsink and you’re ready to go!

NT-H1 is one of the easiest to clean thermal compounds on the market: Simply wipe it off the CPU and heatsink with a dry tissue or paper towel, then wipe them clean with a moist tissue or towel. No cleaning alcohol or solvent required!

While some high-end thermal compounds and pads are risky to use due to their electrical conductivity or corroding properties, there’s no risk of short-circuits with NT-H1 and it’s completely safe to use with any type of CPU cooler, regardless of whether it’s made from copper or aluminum and whether it’s nickel-plated or not.

NT-H1's unique formula is highly stable over time, even after longer periods of usage. It can be stored at room temperature for at least 3 years and due to the compound’s exceptional curing, bleeding, dry-out and thermal cycling characteristics, it can be used on the CPU for 5 years or more.

No break-in or burn-in required

Some thermal compounds need a longer break-in period or cure time until they reach their full performance and some thermal pads must undergo a dedicated burn-in process. By contrast, NT-H1 is ready to go right away and doesn’t require any special preparations.

Sufficient for around 3-20 applications (depending on the size of the CPU or GPU, e.g. around 3 applications for large CPUs such as TR4 and around 20 for small CPUs such as LGA1151), the classic 3.5g packaging size is ideal for most users who only install coolers every now and then.

Learn more about the Noctua NT-H1

Overall Review: It's too bad this is not as popular as Arctic Silver 5, because it is a better compound. Used this for a few months with my NH-D14, then tried Arctic Silver 5 for a month... this stuff is 1-3C cooler.

Pros: -is boss -used it on 6 applications so far ( 5 cpu's 1 gpu) -usually drops cpu temps by 6 degrees and gpu by 3 (before curing) -not an expert but doesnt taste too good

Cons: cap is a little annoying

Pros: actually its great stuff... used it on a Ryzen 5 2600 with the stock cooler, it was running at 55c on idle, after I applied this stuff, it runs at 45c... then I installed a AIO water cooler with this stuff, and the CPU runs at 29c on idle with the fans running at around 1200 RPM... temps never go past 52c, with the CPU overclocked to 4ghz on full load and the fans running at 1500 RPM, they can go up to 2000rpm but I only noticed a couple degrees difference so it wasn't worth the extra noise.

Overall Review: Yes I will buy this again when I need to, the tube came with plenty for white a few applications, I even used it on my GPU. I like that its non-conductive, in fact, it was the entire reason I purchased it, the fact that it works so well was a nice surprise. I definitely would recommend this to anyone looking to buy some thermal compound.

Pros: Great Paste keep's temps way down, Spreads perfectly very good density not runny at all, Non conductive that would be a plus for sum, No break in time paste give's low temps right off the bat !!!!!!!

Overall Review: I have always been a die hard arctic silver fan but Noctua NT-H1 has got them beat in every way, Noctua uses a new hybrid compound of different micro-particles and it truly is a superior paste, I will now be using Noctua NT-H1 on all my builds and would strongly recommend everybody give it a try and see for yourself that Noctua NT-H1 is overall a better paste !!!!

Pros: Noctua NT-H1 is a superior thermal compound hands down. I have used Arctic Silver 5 for years and been pretty satisfied with it but simply wanted to try something else. And Im very glad I did! Read some reviews and decided on this compound and EKWB's as well. I am pleased to report that this Noctua thermal paste lowered my CPU temps while stress testing on a Core i5 6600k overclocked to 4.4Ghz at 1.28v from 75-76c (after Arctic Silvers 100hr burn in period) to a very consistent 68c with NT-H1. These tests being conducted with the latest version of FurMark and verified with the latest version of Heavyload CPU load stress test software. EK's thermal pasted coming in second with a max temp of 74c using the same perimeters. So a 5 degree difference in my EK custom water loop including the full load on my GPU also integrated into the same water loop is very safe and acceptable temperature. While gaming I rarely see temps near 68c. I HIGHLY recommenced using this compound especially over AC5 an EKs solutions.

Overall Review: Great price here on Newegg. Retail I've see this same volume go for as much as $12

Pros: Put this stuff on my xbox360 and it does the job and makes everything cooler(temp wise 10c cooler on a 3.2 ghz xbox360 chip).

Cons: None so Far!

Pros: - Perfect viscosity. Neither too dense nor watery. - Easy to apply and clean. - Non-conductive. Perfect for GPUs. - Helped me to bring my Sapphire 280x OC (1020/1500) temperature down in FurMark 1.18.1.0 and Kombustor 3 below 70°C. It just never goes above 68° anymore regardless what I run. - Helps to keep your system quiet (less temperature -> slower fan spinning). - Comes in the easy to use container. - Has zero curing time. - Works better than Arctic Silver 5 and MX-4 (Can't get why people are so addicted to them. Being conservative in computers doesn't really work well. NT-H1 is better by far).

Cons: NONE I can see.

Overall Review: People complaining about price usually forget that you get for you pay for. Just check pricing for Thermal Grizzly Kryonaut / Hydronaut. I can also suggest Gelid Solutions GC-Extreme. Great thermal compound as well but hard to apply IMHO. Not always worth an effort.

Overall Review: I will not have to buy thermal paste for years to come. I used it for four different applications and it's not even half gone.