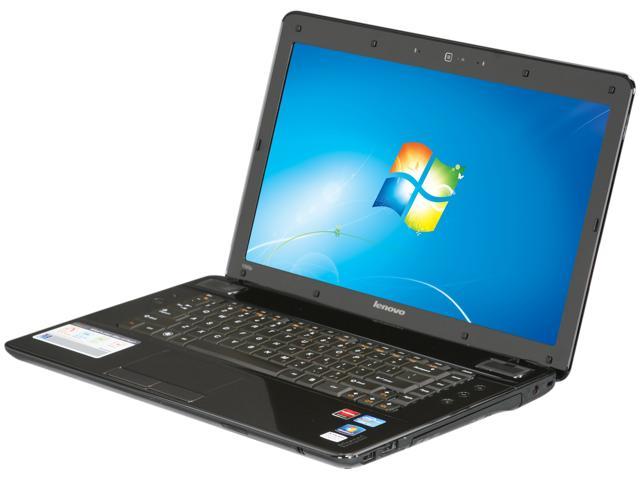 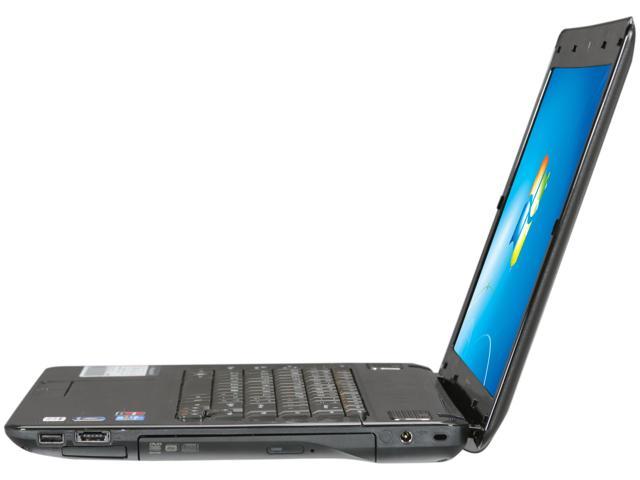 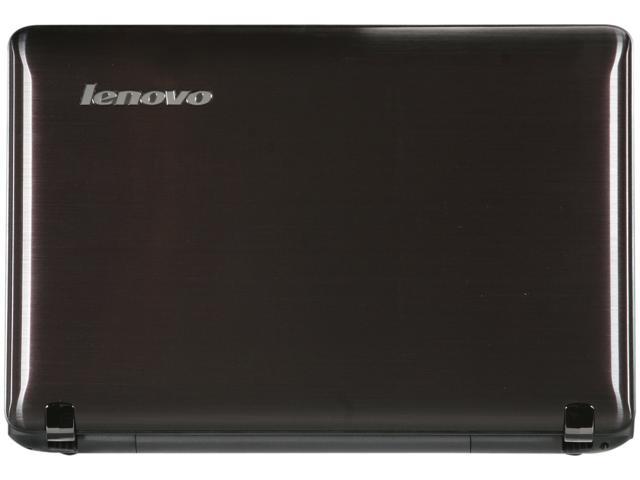 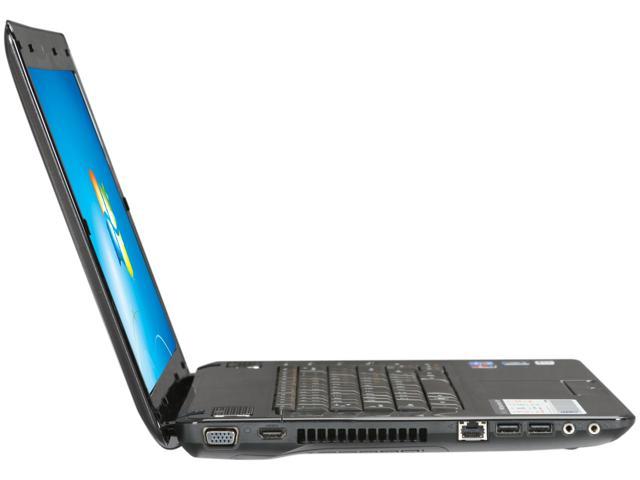 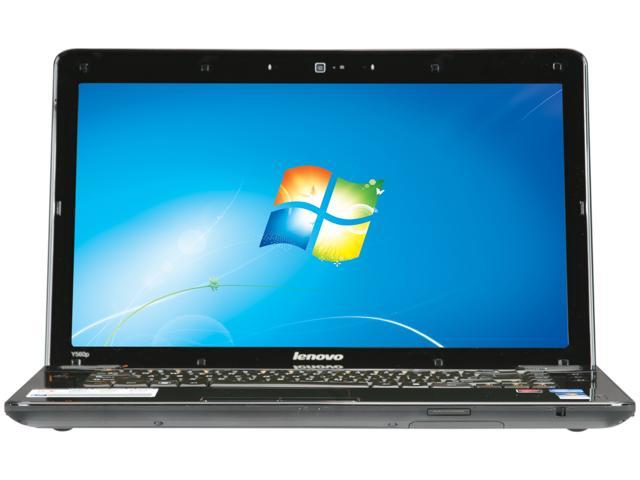 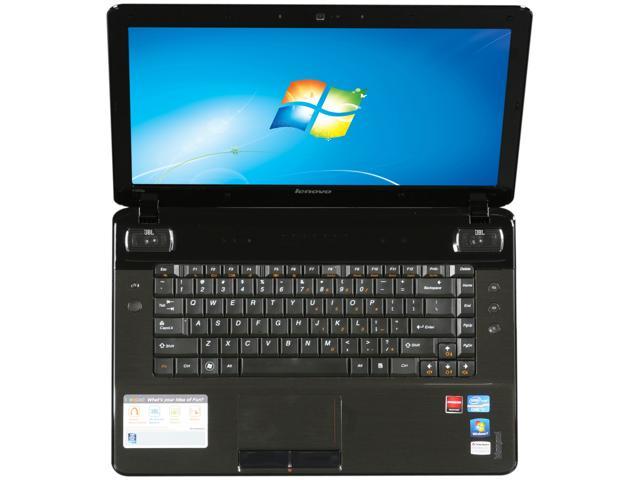 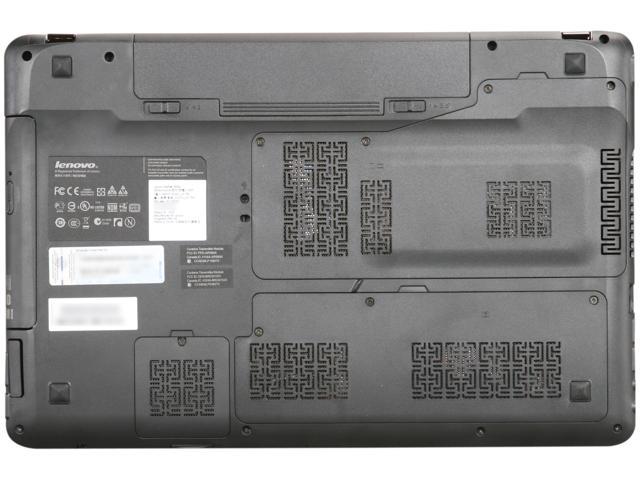 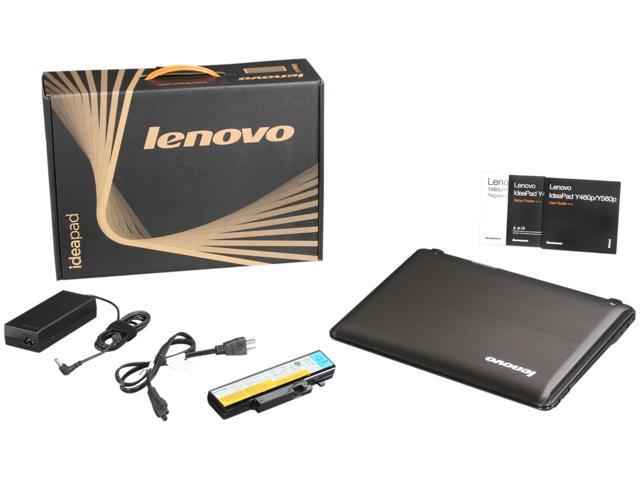 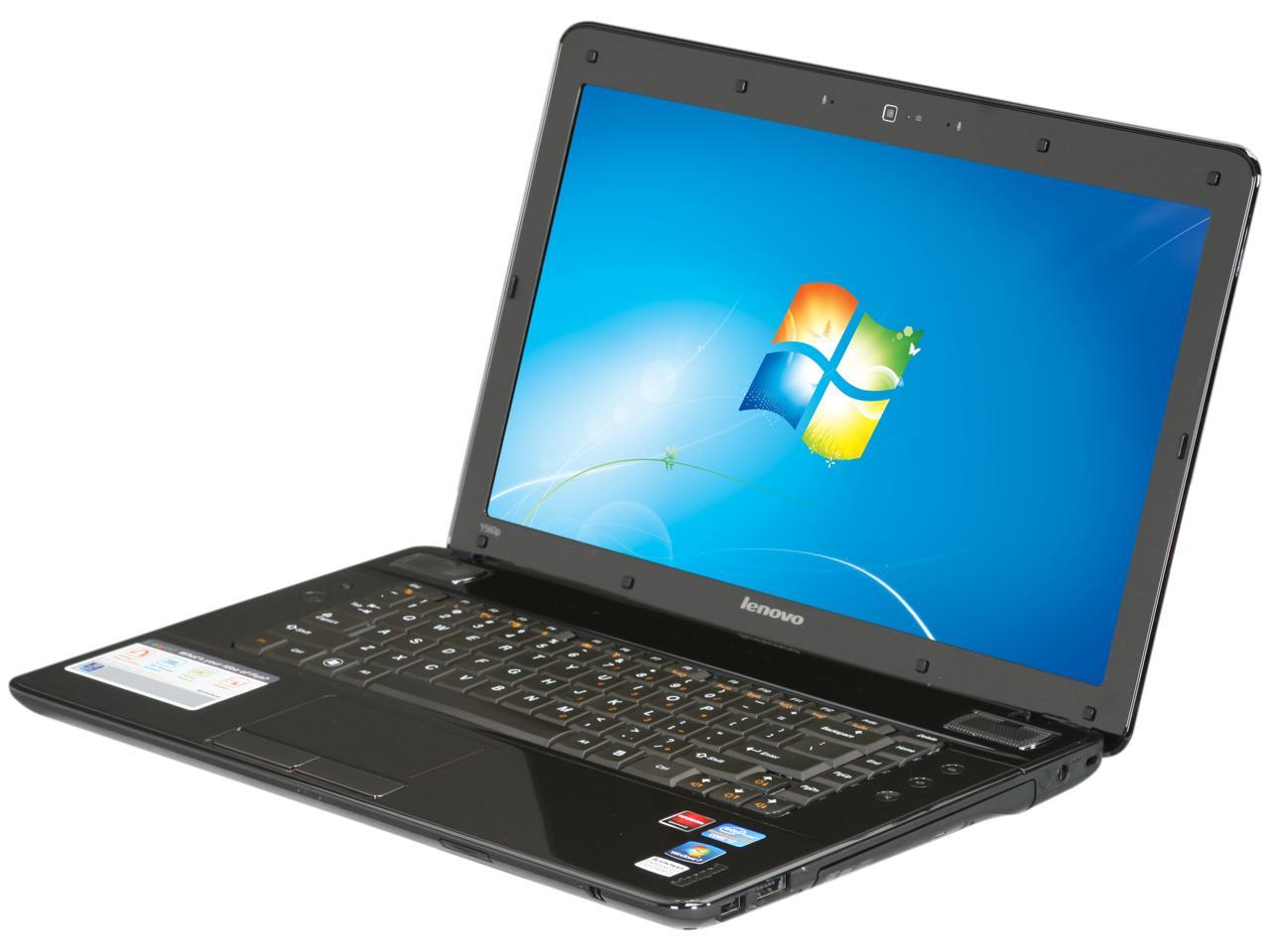 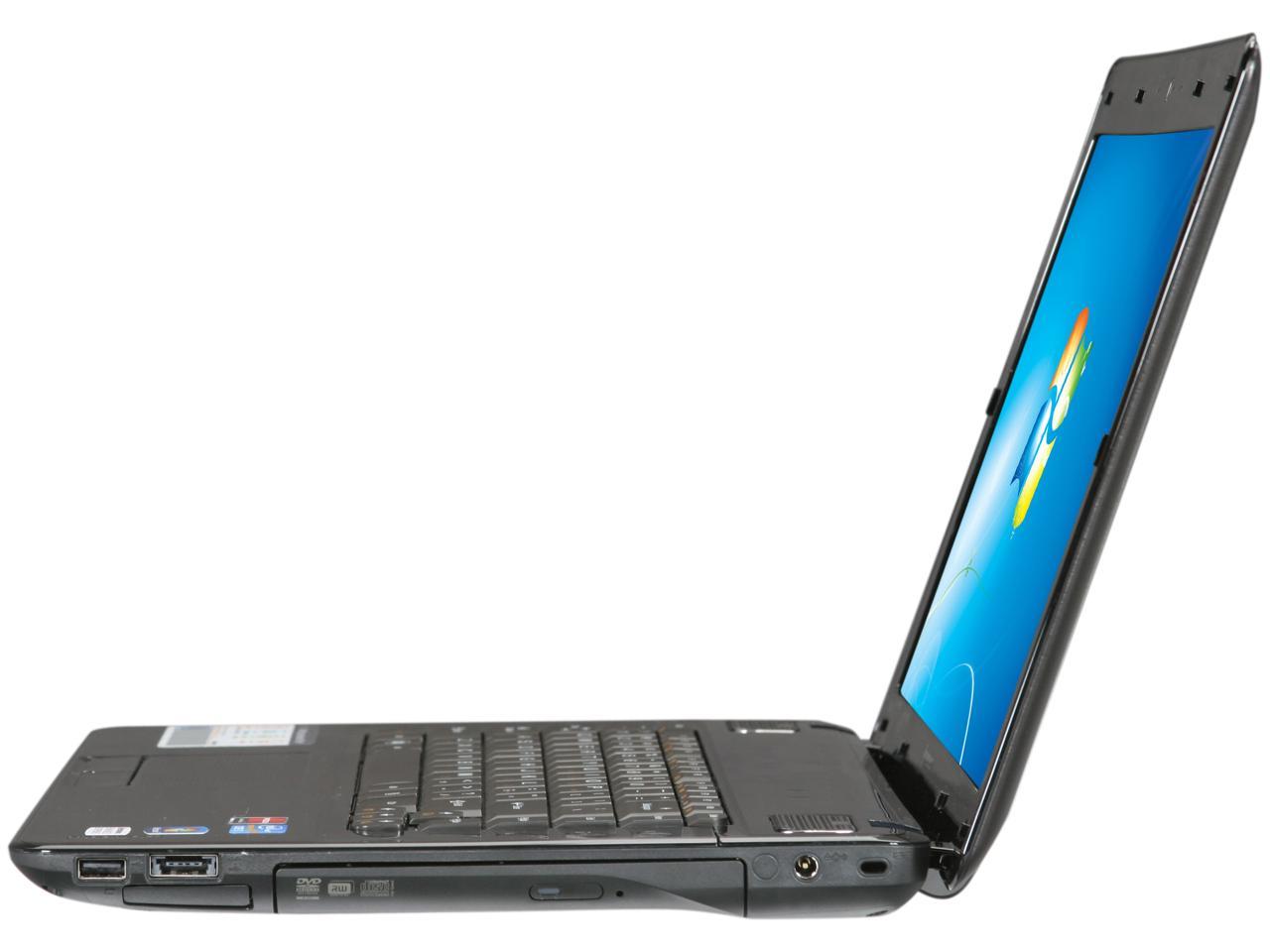 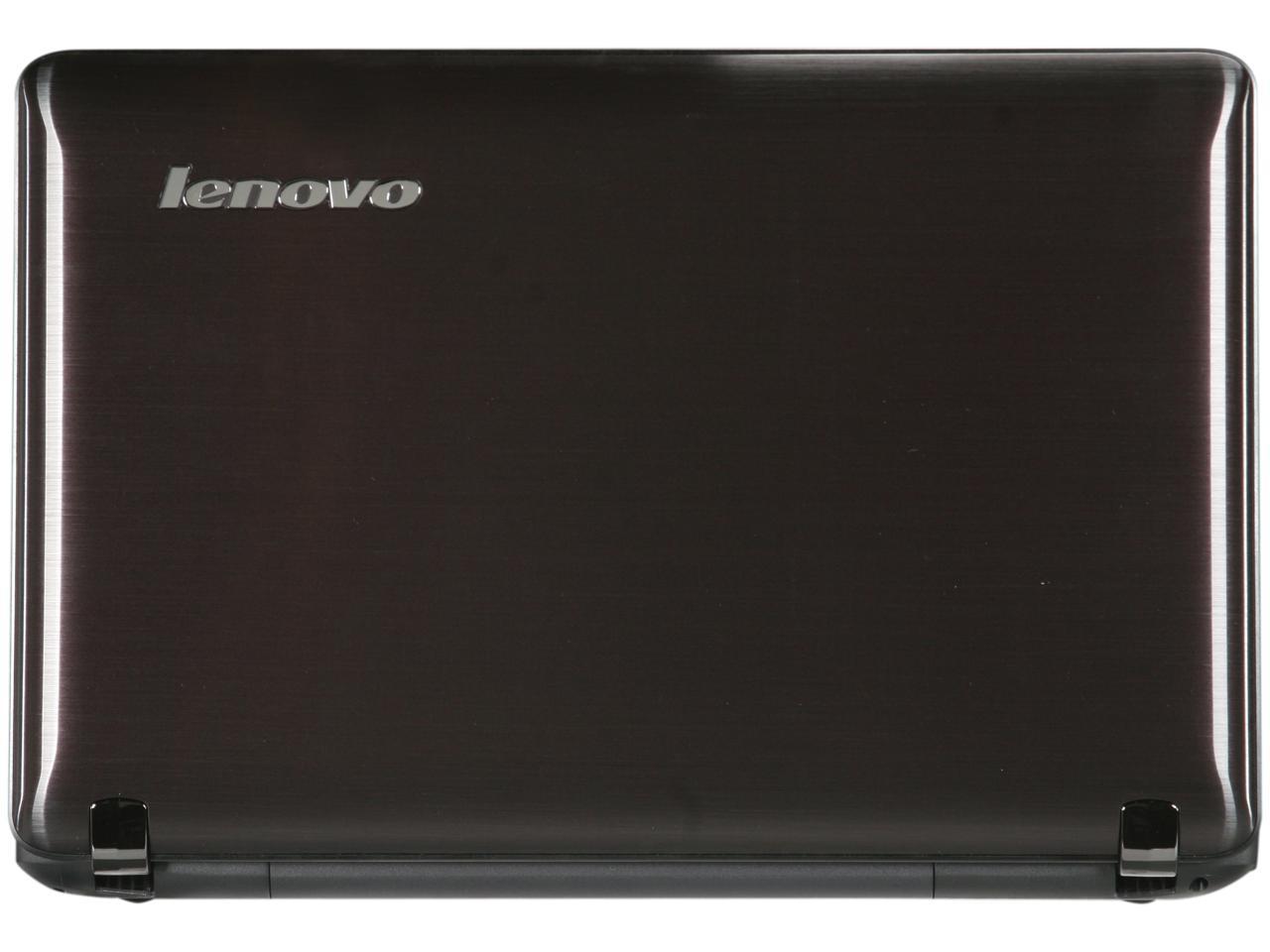 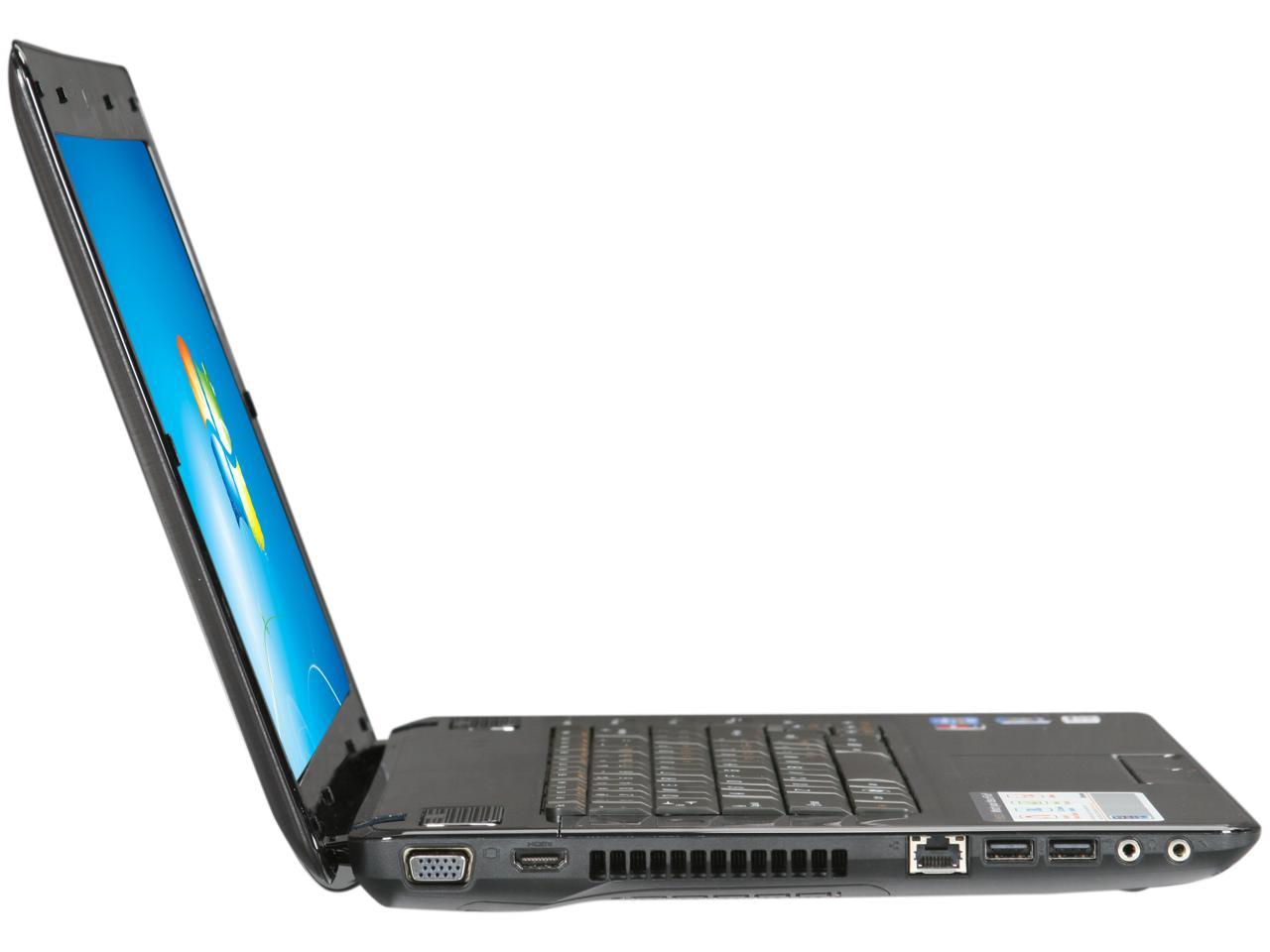 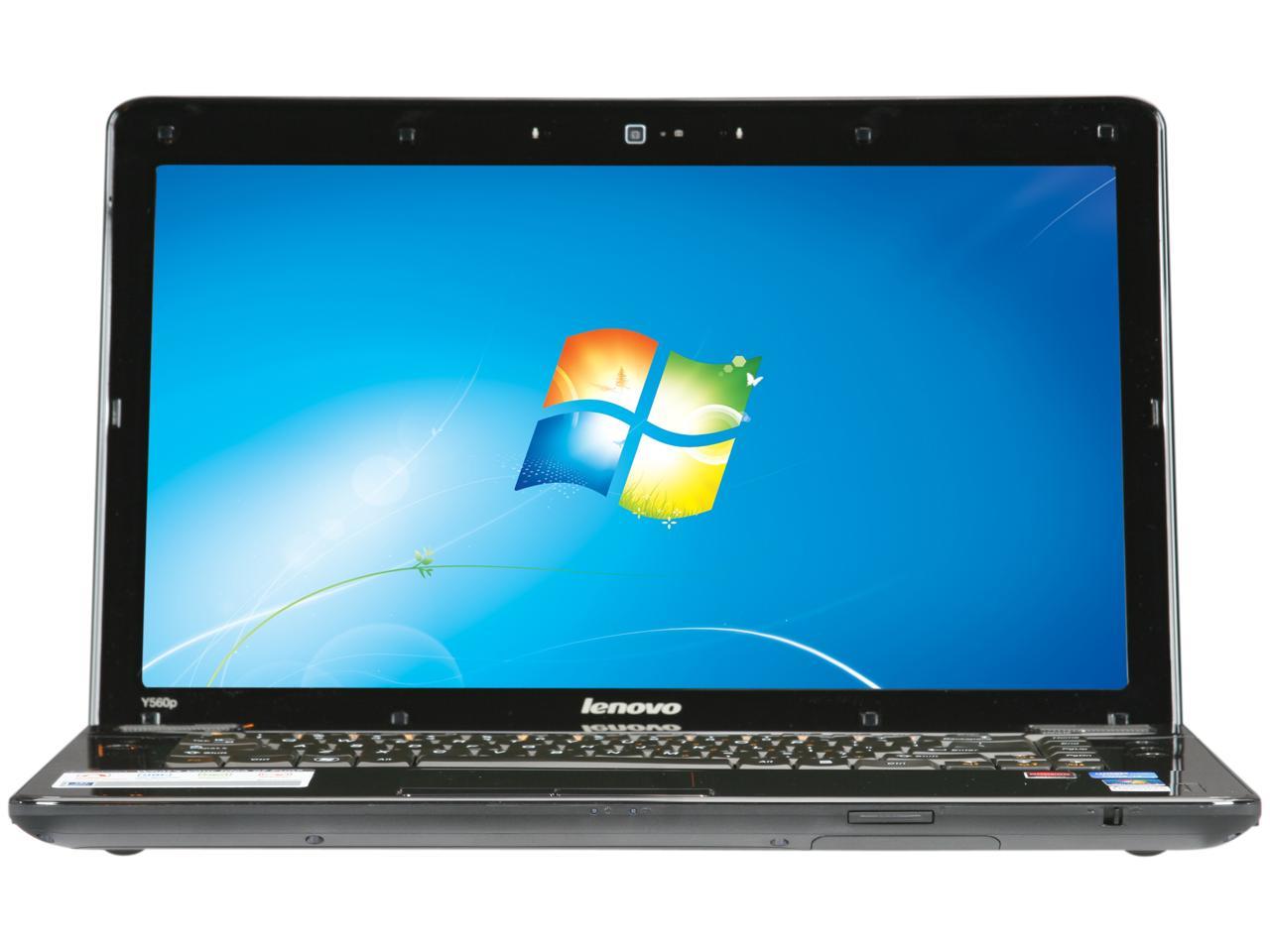 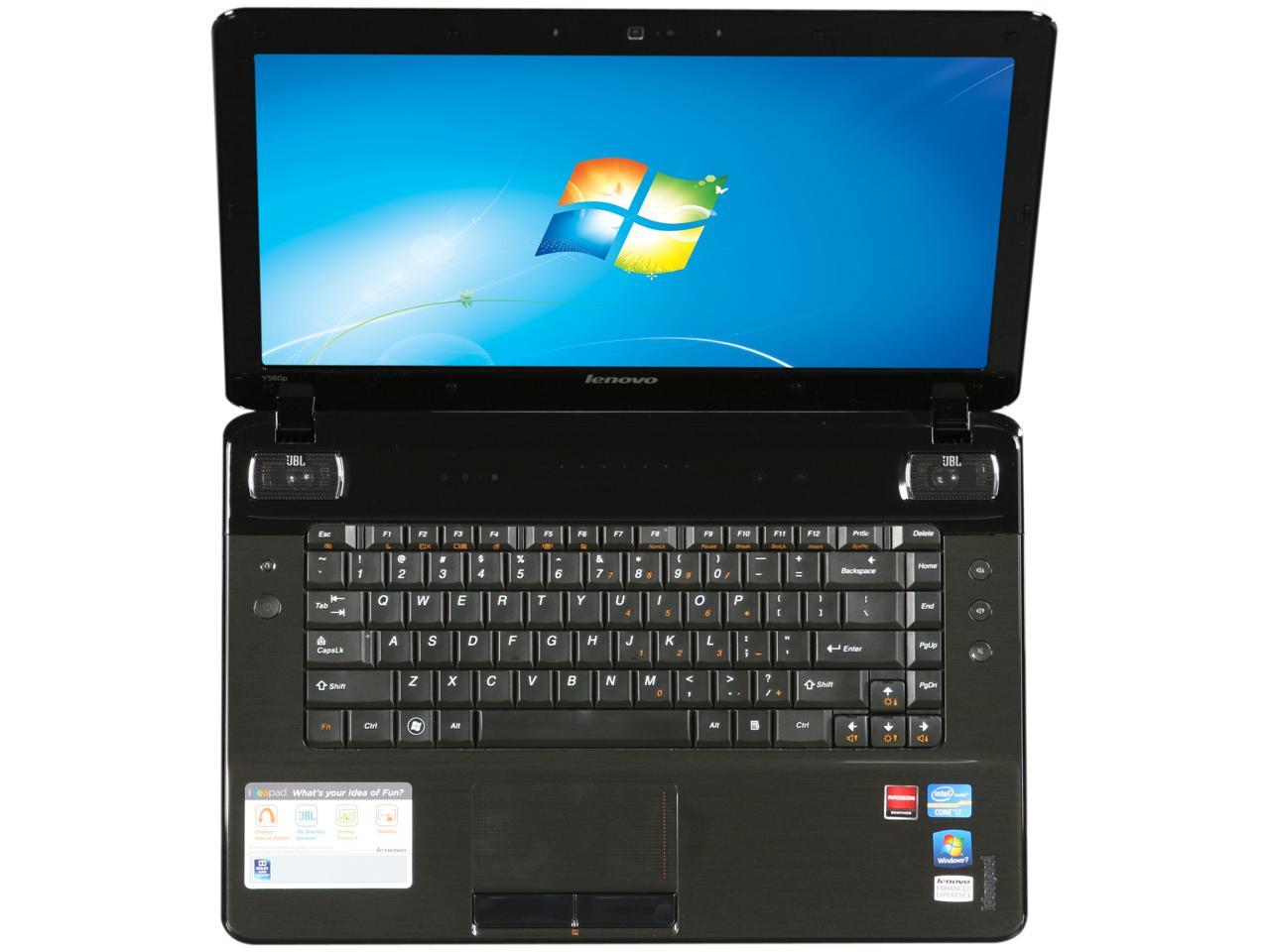 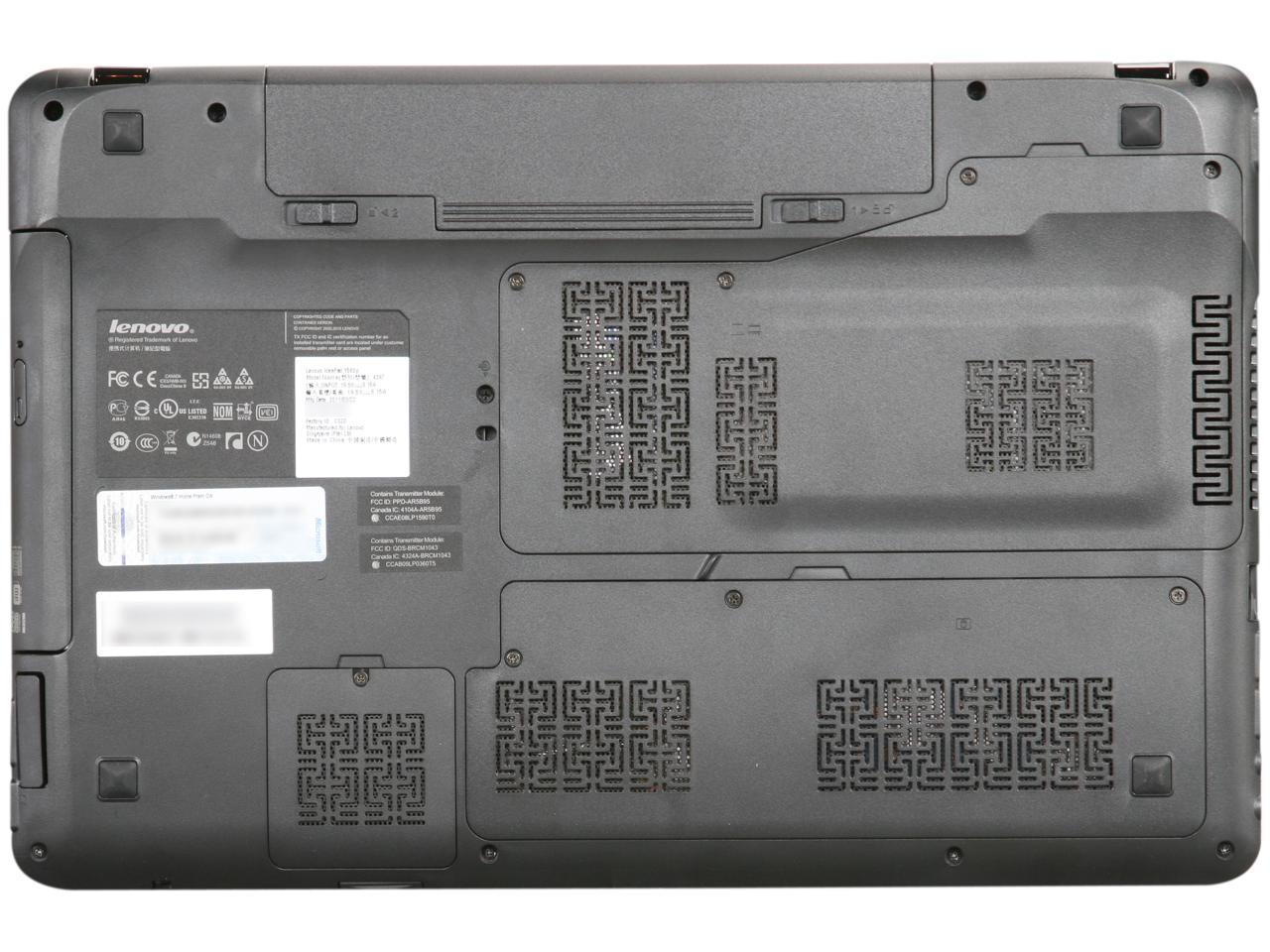 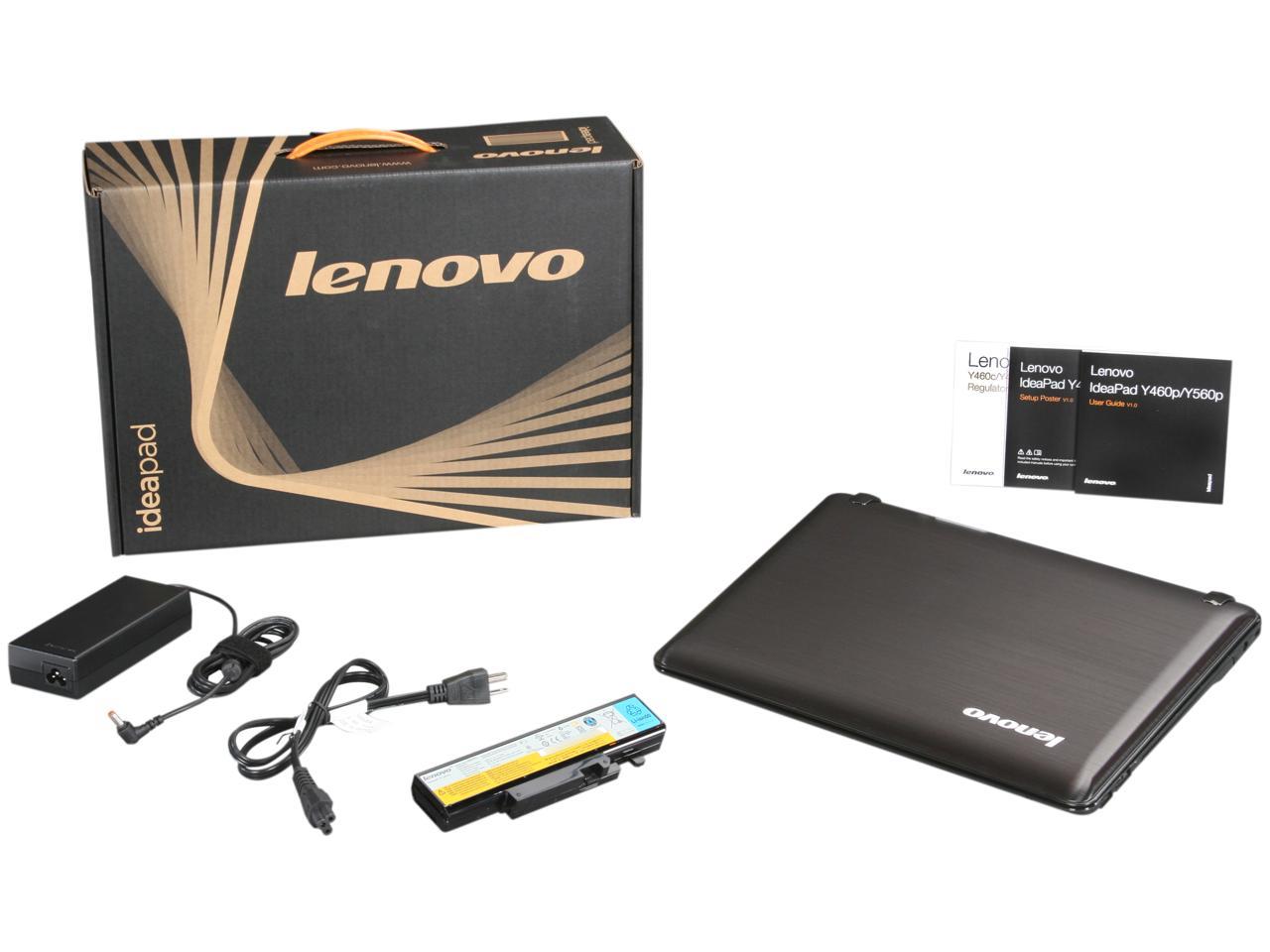 (24) Write a Review
OUT OF STOCK.
Overview
Specs
Reviews
Attention all mobile entertainment-seekers: Here's your chance to get your hands on seriously-fun laptops. Prepare to fall for laptops built with stunning displays, crisp audio, multimedia-focused features and the speediest processing available. Irresistible, versatile and built to woo.

Pros: +This laptop has some decent hardware at a really cheap price. +The battery life isn't too bad at 3+ hours. +Stays pretty cool and doesn't put out nearly as much heat as my ASUS N61JQ-A1 (which could fry an egg.) +Textured touchpad is very accurate and appropriately sized.

Cons: -The keyboard itself has great tactile feedback but suffers from two major design flaws: 1. Left Ctrl and Fn keys on all Lenovos are reversed and cannot be switched back through the bios like on the Lenovo ThinkPads. (A modified bios is available but will void your warranty.) 2. The caps lock indicator is built into the right side of the caps lock key. It is not viewable while your hands are on the keyboard. It doesn't come with a number pad. I don't care for number pads and never use them. I feel that a number pad would cramp things a bit. If you need one then this could be a deal breaker. The stock operating system comes installed with a lot of bloatware. The first thing I did was to reinstall Windows 7 with the latest service pack and all updates. I installed the latest chipset and videocard drivers from their respective manufacturers and installed the newest drivers listed on the Lenovo website for everything else.

Overall Review: This laptop comes with the AMD 6570M but it doesn't take advantage of the gpu's ability to handle GDDR5 and instead uses GDDR3 so make no mistake about it, its just a relabeled 5730 from last year. The processor is great and it seems that all the issues with the Sandy Bridge chipset have been worked out. According to CPU-Z, this laptop is using revision 9 of the Sandy Bridge chipset. For the gamers: I installed CoD Black Ops and Need For Speed Hot Pursuit. Both games play beautifully on medium graphics at 1366x768. I also installed GTA4 and was stunned with how pitiful the performance was. In the laptop's defense, GTA4 is a resource hog. I find that Lenovo's support for all IdeaPads is pretty bad. If you call ThinkPad technical support they pick up quickly and are very knowledgeable, but my experiences with IdeaPad support makes me pray that this machine never breaks down. To be honest, the Fn key placement is a real deal breaker for me.

Pros: First, I need to note that I purchased this laptop for $650+tax, which was a big reason I made the purchase. That aside, it is a very good laptop considering it is cheaper than most i7 laptops and has a decent GPU (HD 6570). It has been solid for everyday tasks. For light gaming, I am able to max out source engine games.

Cons: Nothing. When I bought the laptop, I was fully aware of the fn/ctrl location, the resolution, the lack of USB 3.0, and the lack of a number pad. Regarding the bloatware, I did a fresh Windows 7 installation within minutes of turning it on.

Pros: Great spec at a great price. I got mine on sale for only $650. The stock hard drive is slow. I replace it with a 7200 rpm 500gb hard drive. That solves the problem. Graphic card is decent to play most current games at great fps in medium setting. I added 8gb and most of my virtual machine application speeded up dramatically.

Cons: Some people mention the strange location of control and fn key. I think it is a real deal breaker. But I am coming from Mac background, so the location of the two keys don't hurt me as bad. The only thing I hated about this laptop is the screen quality is poor. Its viewing angle is limited and looks white out even when you face it at a straight angle.

Overall Review: If you are tight on budget, this is a great performance laptop offered at acceptable price. If you think Lenovo made sturdy IBM thinkpad, thinks again. This laptop line is budget laptop thus the quality won't be as good.

Overall Review: Laptop is great, been using it for gaming and using Adobe CS5, going to upgrade it to the 8gb of RAM soon and I think this laptop will be my favorite for a very long time. Again with Newegg's amazing service!

Overall Review: Originally I was pretty jaded by the keyboard. After several months I've gotten used to the placement of the keys. Back when I bought this machine it was the best bang for your dollar and it still is. I didn't have high hopes at first but this machine grew on me. A clean installation did wonders for it. I wouldn't even call it a budget gaming machine. Its pretty high quality and chews through every game I've ever thrown at it. All things considered, I've found myself recommending this laptop to everyone. If you can get over the keyboard placement, you will learn to love this machine. My original review was on 4/21/11, titled Mixed Bag.

Pros: core I7 cpu w/ dedicated Graphics and HDMI out. This notebook has exactly what I wanted at a decent price.

Overall Review: Upgraded ram to 8gb and replaced stock hdd with a ssd. Now this is by far the fastest notebook I've ever used. Handles anything you can throw at it.

Pros: The laptop is very good for its price. At the time of purchasing this laptop, the two key things that I was looking for was a Sandy Bridge and a good graphics card. Compared to many of the other laptops that were out there, this was very reasonably priced and thus far in terms of performance has treated me well. -The battery length, thus far, has been quite nice to have. But then again its a new computer and a new battery, so this is pretty common -One thing that was not mentioned on the neweg page, is that the speakers for it are pretty good for a laptop.

Cons: -First off, I'm not the biggest fan of where some of the keys are located on the keyboard. Particularly, the Function Key and Windows Key keep getting pressed when I mean to push control. You can turn off the windows button, and the function button isn't that big of an issue. Regardless, this is just an opinion -Another problem that I don't think is bound to bother me is the touchpad. I feel its WAY too sensitive, and I get pretty angry at it quite often, but once again I can disable it and use a real mouse via USB. -For some reason the CD ROM keeps ejecting the CD at random moments when I lift or move the laptop up for a few seconds. It doesn't bother me, but it happens pretty often

Overall Review: This is probably just a problem with my computer in particular, but the people who manufactured my particular laptop either forgot or neglected to add specific screw to keep the hard-drive in place. This isn't a serious problem, as i simple added the screw myself once I located the problem, but the first time my computer didn't boot up properly I was terrified that it was already broken. Basically what happens, is that the hard-drive occasionally slides out of place because the screw was not present, and hence I would have to open up the panel and re-adjust it.

Cons: glossy i dont like glossy but for the price who cares no numeric pad no usb 3.0 weird partition but that can be fixed a lot of bloat ware but a fresh window install fixed that

Overall Review: i bought this wonderful machine at a local store (sorry Newegg) for $650 and i will be honest i really wanted an Asus laptop but for the money this cannot be beaten