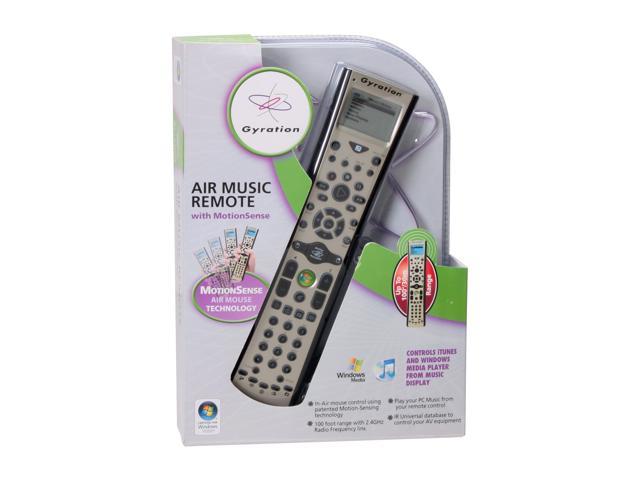 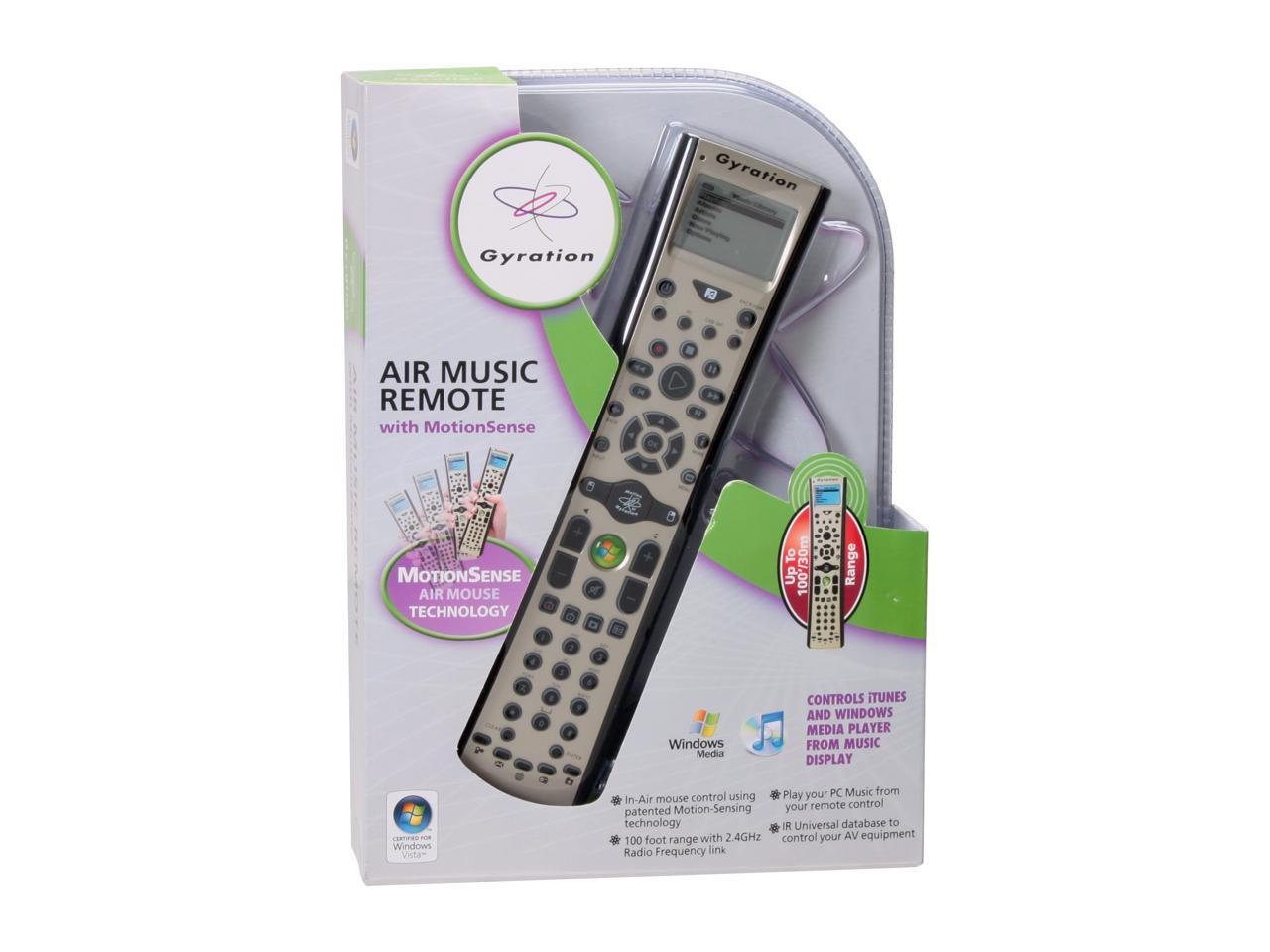 (23) Write a Review
OUT OF STOCK.
Overview
Specs
Reviews
The Air Music Remote gives you wireless control of your PC and Media Center, and up to 3 additional devices. The remote uses RF signals, so you get flawless performance up to 100 feet away from your devices, even with walls or furniture in the way. The MotionSense technology uses your wrist motions to move the cursor, like a mouse that works in the air. You'll navigate through your files and media library, and control media playback as easily as if you were sitting at your desk, and you can do it from the comfort of your sofa!
Program the remote to control your TV, DVD or Blu-Ray, and home theater receiver, and you'll never need to pick up another remote again! Your computer can be a powerful component in your home entertainment system; let the Gyration Air Remote make the integration seamless!

Learn more about the Gyration GYR4101US

Pros: EXACTLY what I have been waiting on/looking for. Flawlessly controls WMC (I have Vista 64) and doubles as a leaning remote. Ignore the reviewers that don't know how to program a univ remote or fail to read the manual (it's kind of hidden in the install folder). It works, just take the time to look up the device code or program by learning (the learning IR is on the bottom, surprise). I design AV systems for a living and this is a solid little toy for anyone with a HTPC. Yes, it is a mouse also, standard gyration quality you wold expect. I was skeptical about the music player aspect of it, but, wow! Takes a few seconds to load, but runs WMP in the background and turns into basically an ipod interface. All metadata gets through, it is 2-way, which means you can see playback time and such. No need to turn on your TV. I'm so pumped, I can finally ditch my factory remotes and lap mousepad!

Cons: Triple tap support takes some digging (i.e. using the keypad to write text like on a phone). I use an adessso keyboard instead anyway. Also it would have been nice to see the screen a color lcd, but that would have made it more expensive and drained more battery, so not a big minus. For some reason, volume punch-through (using same volume command in all modes) is left out of PC mode. In other words, you can control your amp volume while controlling a CD player, but not while on the PC. You just have to change modes, no biggie. It changes your windows volume instead, which I would prefer not to do, but mute is still useful. Also, when choosing inputs on my TV (an old Olevia 32) it skips 2-3 at a time in the little 4-way menu. More of a TV interface design flaw though. Very weird, because I can switch inputs one at a time just fine on my AVR. You can get around this by programming the selection keys to another button if you want, such as the number keys 2, 4, 6, 8, for arrows.

Overall Review: Hopefully within a few years they will add a PC program for greater detail of control, commands, and macros, similar to Universal Remote. Frankly, a tiny blackberry sized kb would be a smart addition also. But that's for another design, this one is fantastic as it is and terribly innovative. Get it already!

Pros: Easy install. Works like a charm in windows 7 64 bit

Cons: remote LCD is A little slow to respond when using windows media center in Windows 7. But is is not bad either.

Pros: Unlike their older model, this model worked out of the box with Windows 7 x64. The older model's gyromouse and u/d/l/r/OK buttons worked. With this model, those functions worked, and the green Media Center button, pause, fast forward, rewind, stop, play, volume, and triple tap also work with 7 Media Center. The gyroscopic mouse is more responsive than in the older model and is actually quite a good pointing device. It is backlit and you can toggle the backlight. The back of the remote is a pleasing nonslip texture.

Cons: The manual was not included AND IT IS NOT AVAILABLE ON THEIR SITE! What amateurs! I have no idea how to configure this thing to learn my receiver and TV remotes. I heard that volume punch through DOES NOT WORK in PC mode, which is the same thing as it not working at all, as far as I'm concerned. These mouse/remotes are only compelling products if you intend to use them with an HTPC, and that means your remote stays in PC mode most of the time. We should be able to punch through volume in PC mode, since that function is frequently used in conjunction with other PC mode buttons such as play/pause/ffw/rwd. It is lacking the four "BluRay" centric buttons, which are useful even if you don't have a BluRay player for their ability to be hooked by Media Center plugins (such as Media Control). Without those buttons you will probably have to use the mouse to change audio streams (for different language tracks) and subtitles.

Overall Review: Continuing from above, another con is that the screen apparently conveys no useful information if you aren't using their music software. Of course I can't be sure because THERE IS NO MANUAL. Gyration is a company that makes a unique line of products but which seems to be hindered by certain amateurish mistakes that hold them back as a company. The obnoxious volume punchthrough problem means my mom is always going to have problems with this thing. The lack of a manual, the lack of email support or forums, all contribute to making this company a second rate company with a very compelling special feature that makes them worth a look. The minute logitech ships a Harmony with a gyroscope, I'm gone from Gyration forever. On the other hand if they can patch these easy-to-fix but annoying issues and ship a remote with bluray buttons and an 'all power' button, they will have a winner on their hands.

Pros: This has made my HTPC so much nicer! MCE remotes are fine but I really enjoy being able to use the mouse in the same remote. Plus the Wii like action of controlling it nice as well

Cons: Its also supposed to be an all in one, but I can't get it to work my Yamaha receiver or my Westinghouse Flat screen Not a huge drawback but it would have been nice. I also did not get a full manual and this model's pdf isn't available yet on their website only an older model which doesn't seem to work with the same codes for programing other items (TV, amp ect)

Overall Review: I think as these HTPC's become more and more common/popular, these types of remotes will become more universal, but this guy fit the spot perfectly *Really I only need the universal feature to turn my other units on and off. It does control the PC volume which works just fine.

Pros: -Works great with Media Center. -Didn't install the software that came with it, not really interested. -Pretty nice not having to stash a mouse next to the sofa. -The gyroscopic mouse is very accurate and sensitive. -For something that you just wave around in the air, the mouse is surprisingly easy to use. -no drivers or software needed, plug and play. -power button actually works well for putting the media center into Standby, and just as good at waking it up from it.(likely depends on ACPI settings in BIOS, but worked out of the box on my ASUS board.) -Remember to hold down the Gyration button on the remote to get the mouse to work before you throw it against the wall. If you read the instructions, you will will learn this, but I only do that as a last resort.

Cons: -not compatible with my Sony Blue Ray player. -only compatible enough with my samsung 52" LCD to turn it on, switch inputs, and change volume. -You can't hold down the volume button to rapidly increase/decrease the volume. You have to keep hitting the button, both on TV and from Media Center, HUGE irritation. -NO SCROLL WHEEL. Makes internet surfing difficult, the down/up arrows do work for scrolling, but I still miss having a wheel. -BAD documentation, especially for setting up other AV components.

Cons: ~Music list functionality on the remote itself only loaded when my database was small (With over 7000 songs it doesnt load. Only shows hour glass for about 30 seconds and then shuts off again

Overall Review: I wish universal remotes would have a time out feature to go back to a specified function. i.e. when you use it to change channels on a set top box then switch to a reciever to turn the volume up. I wish it would return to the set top box after 30 seconds or a minute or a user defined amount of time. Perfectly functional as an all around media center remote.

Pros: The air mouse portion of this product works flawlessly. I actually really enjoyed using that part of the product to navigate my HTPC. The remote feels good in the hand, which is surprising for how large it is.

Cons: The manufacturers' codes are seriously outdated. The auto-search function for finding codes doesn't find anything newer than 2008. The learning mode for learning infrared commands from other remotes works. HOWEVER, after learning about 12 commands mine stopped learning anything else and would lock up every time I tried to learn another command. So, essentially I had a air mouse in the shape of a remote that wouldn't control anything.

Overall Review: I RMA'd mine for a refund. Newegg wanted to charge a restocking fee, but I used their Live Help option and talked to a great customer service rep named Rose. She waived the restocking fee and gave me a free shipping label. If you want an air mouse, get one of Gyration's other products. If you want something to control your HTPC, get a Logitech DiNovo Mini. That's what I now use and I really like it so far.

Pros: I love this remote! Specifically, the mouse gyration control, the music library screen, and the ease of programming.

Cons: There a no ability to setup macros! No printed manual is included! The remote is a little long.

Overall Review: Three tap button software must be downloaded from the gyration website with no mention of it in the manual!