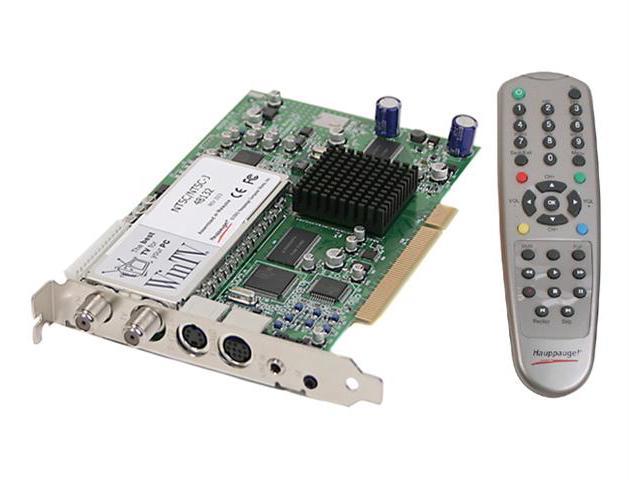 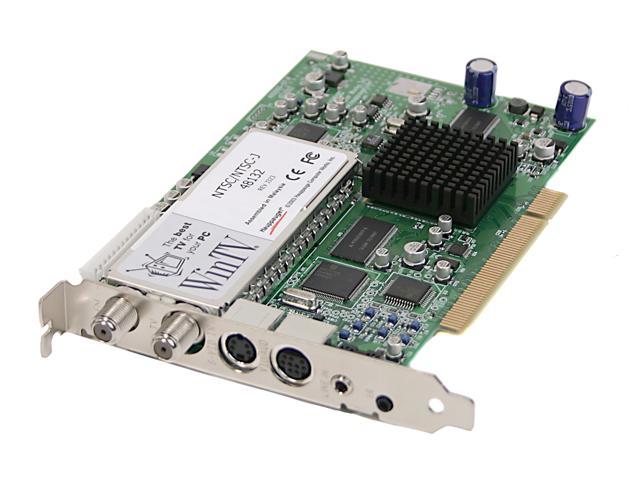 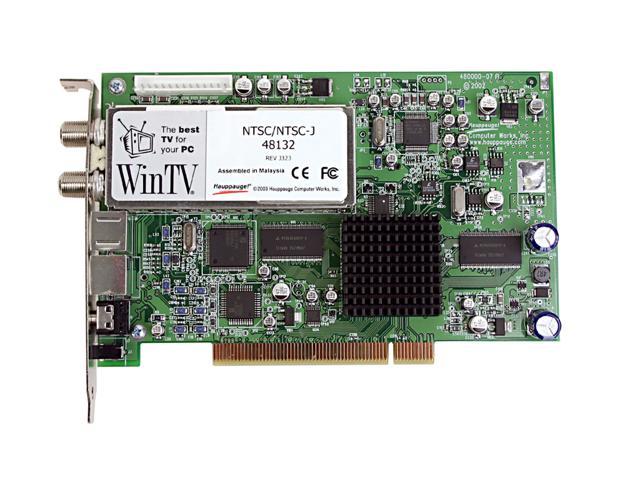 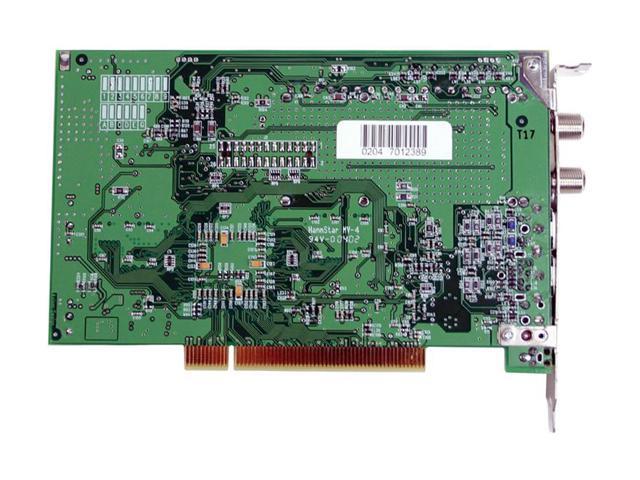 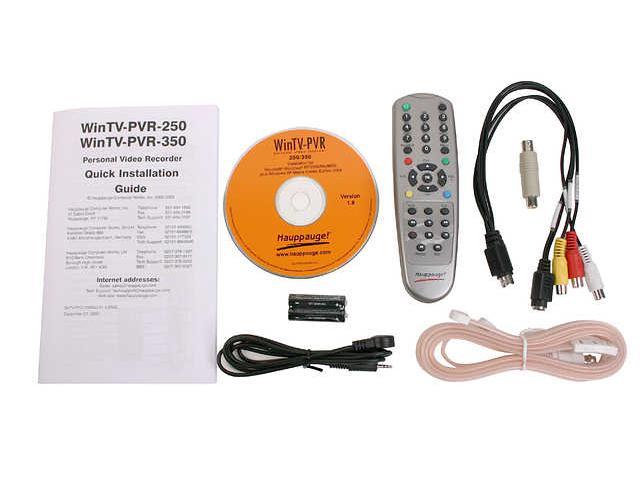 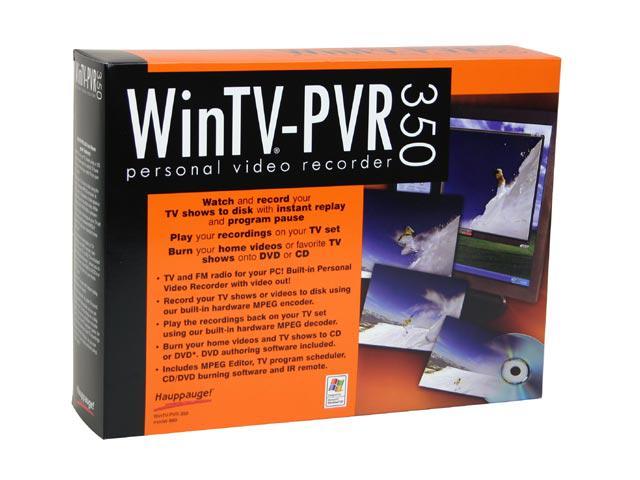 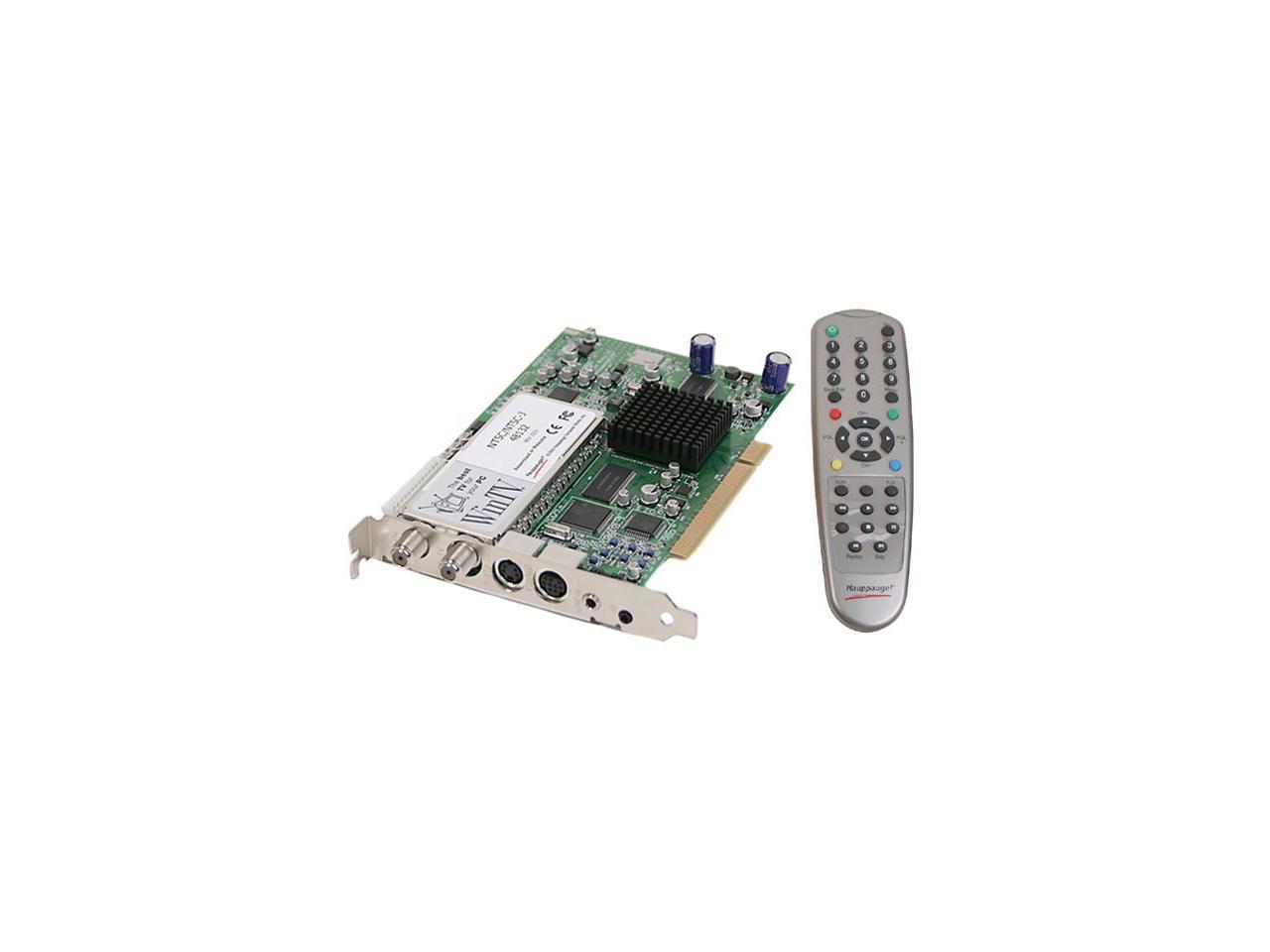 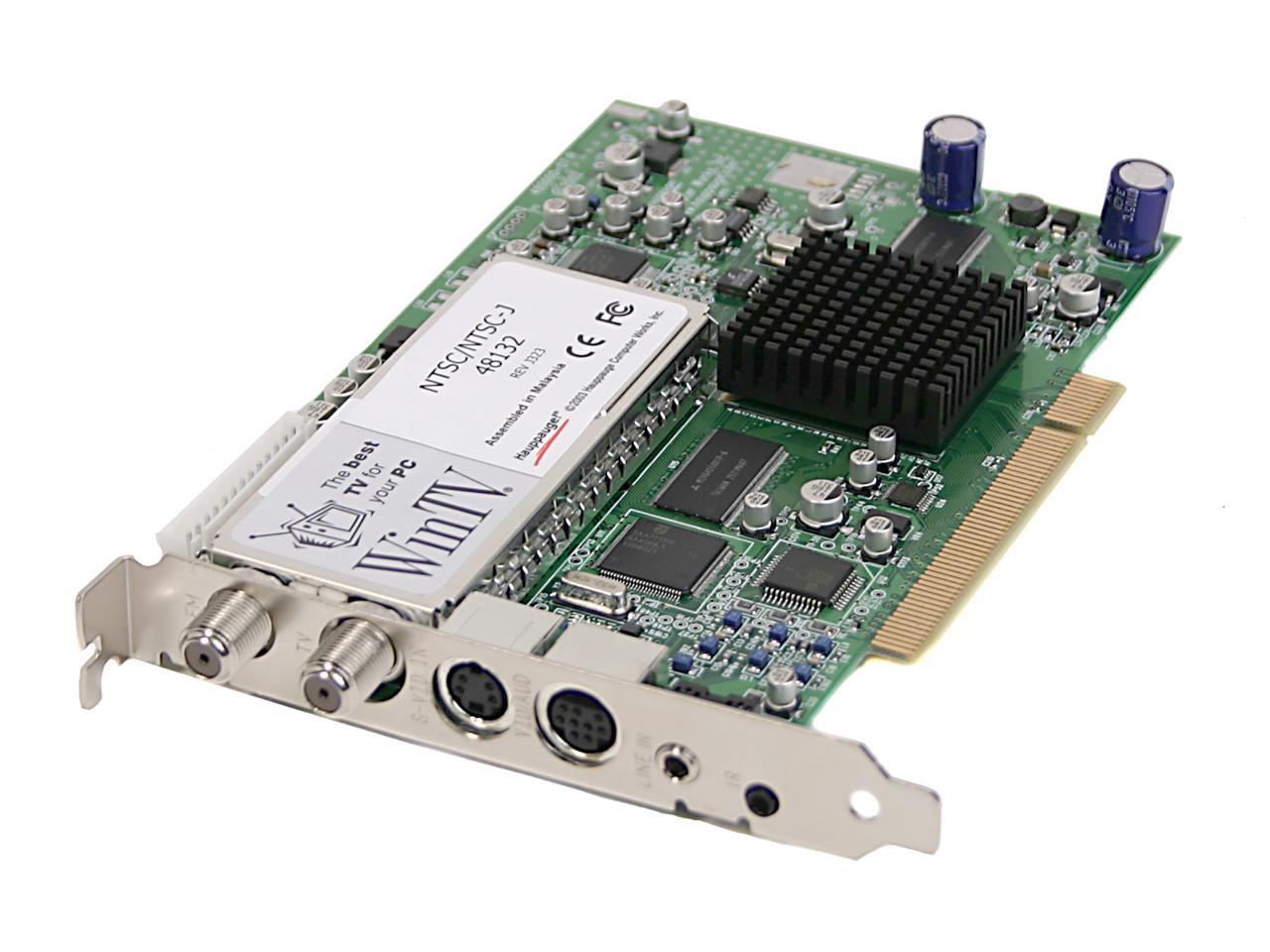 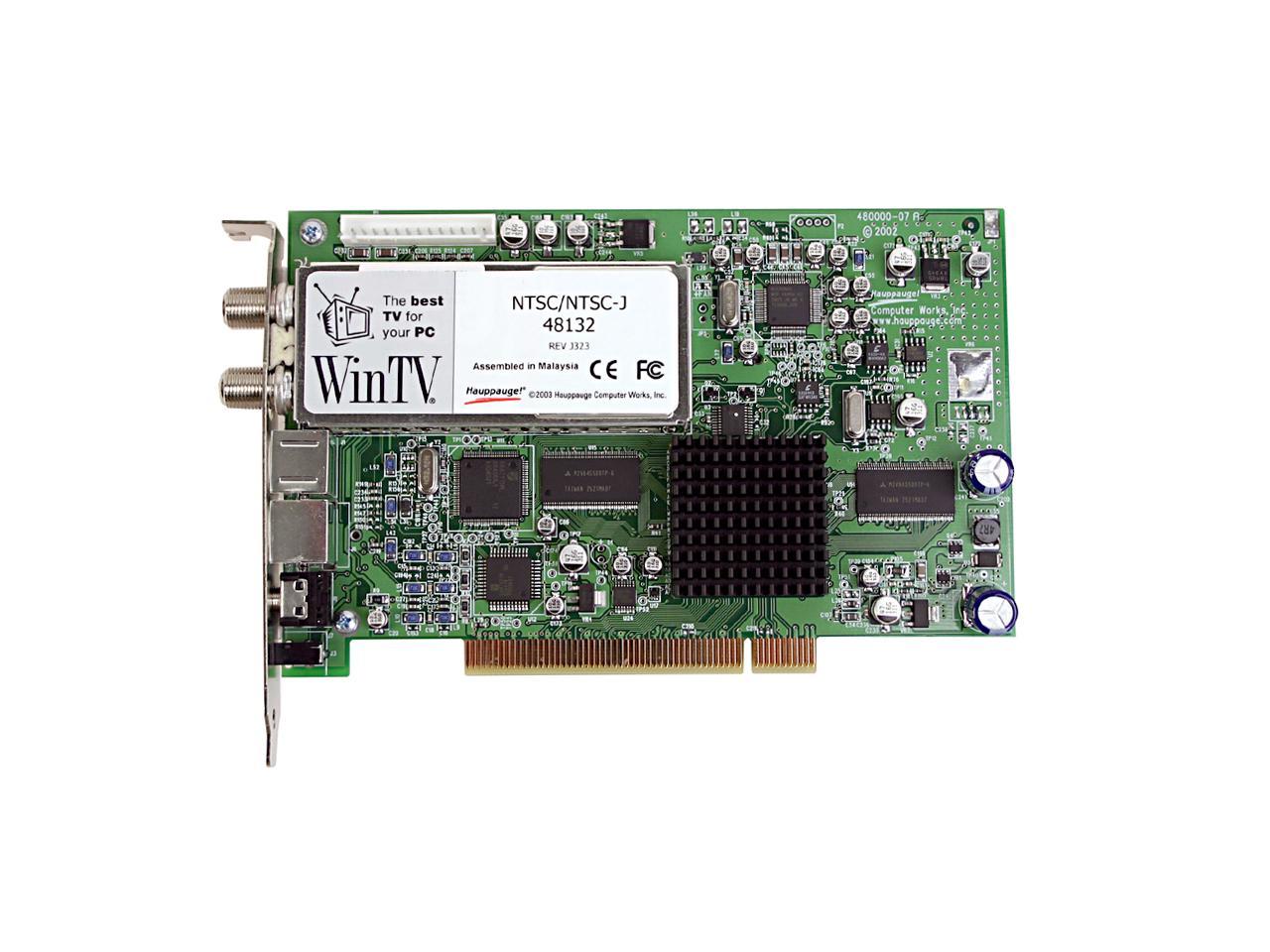 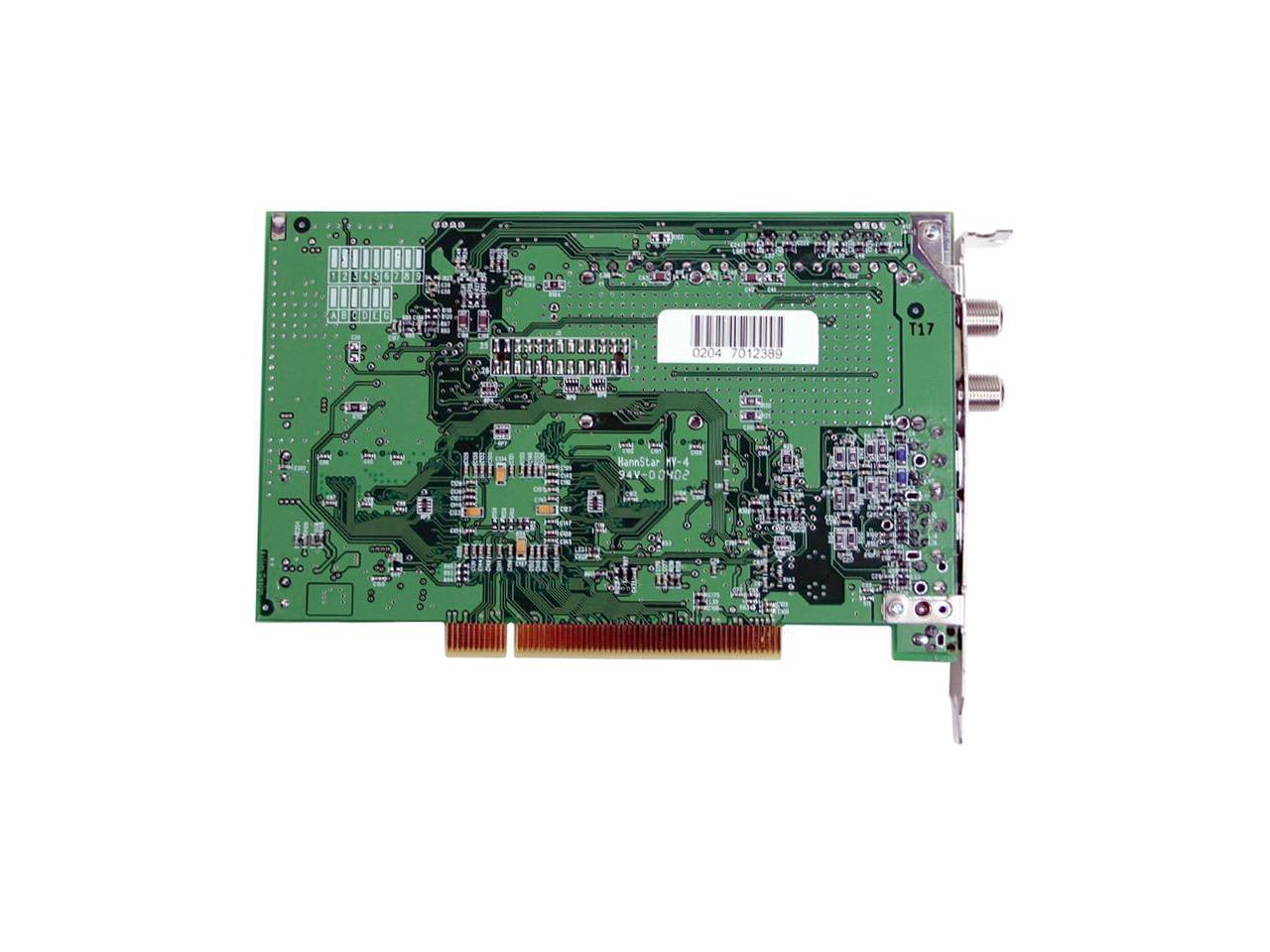 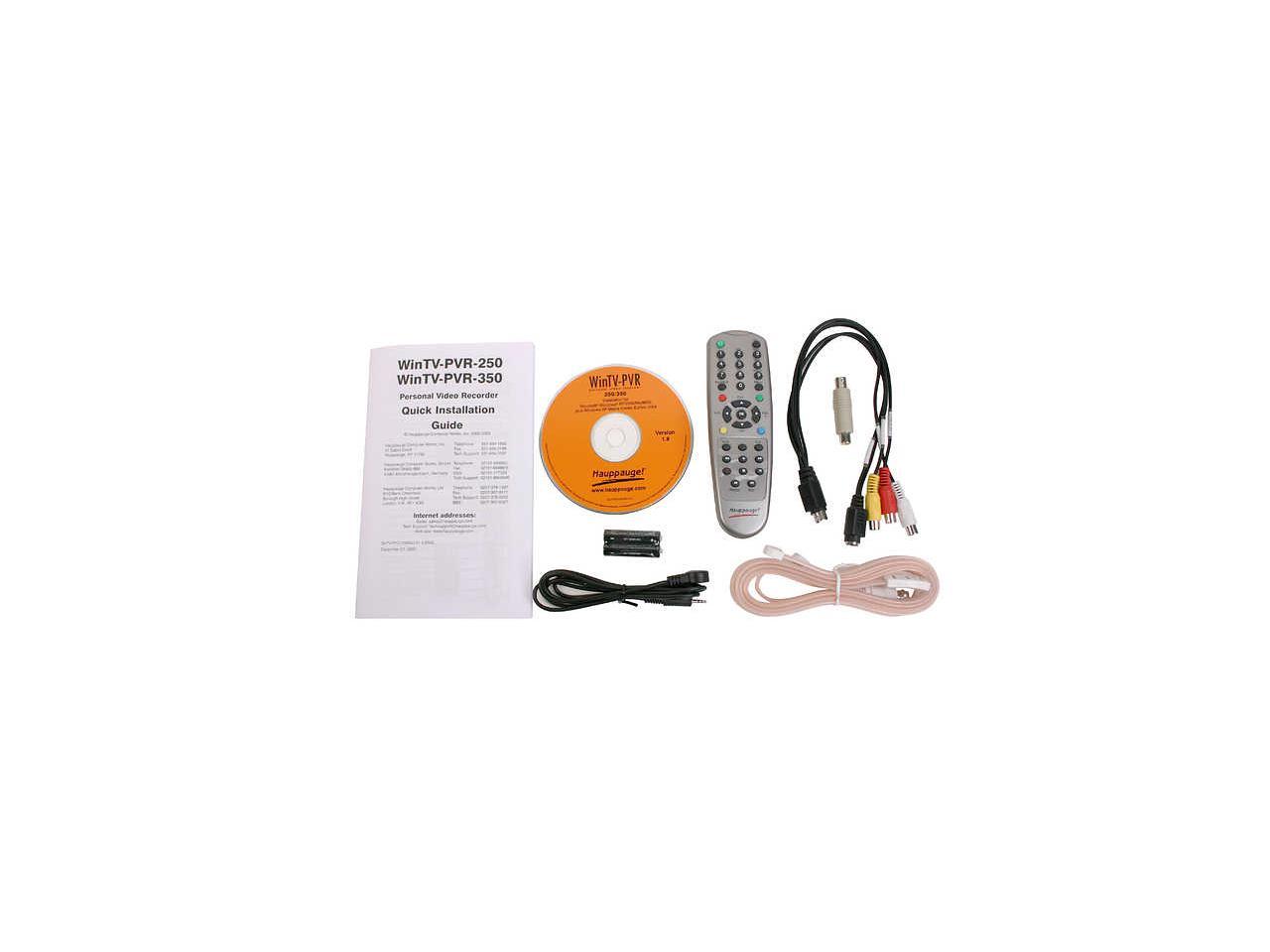 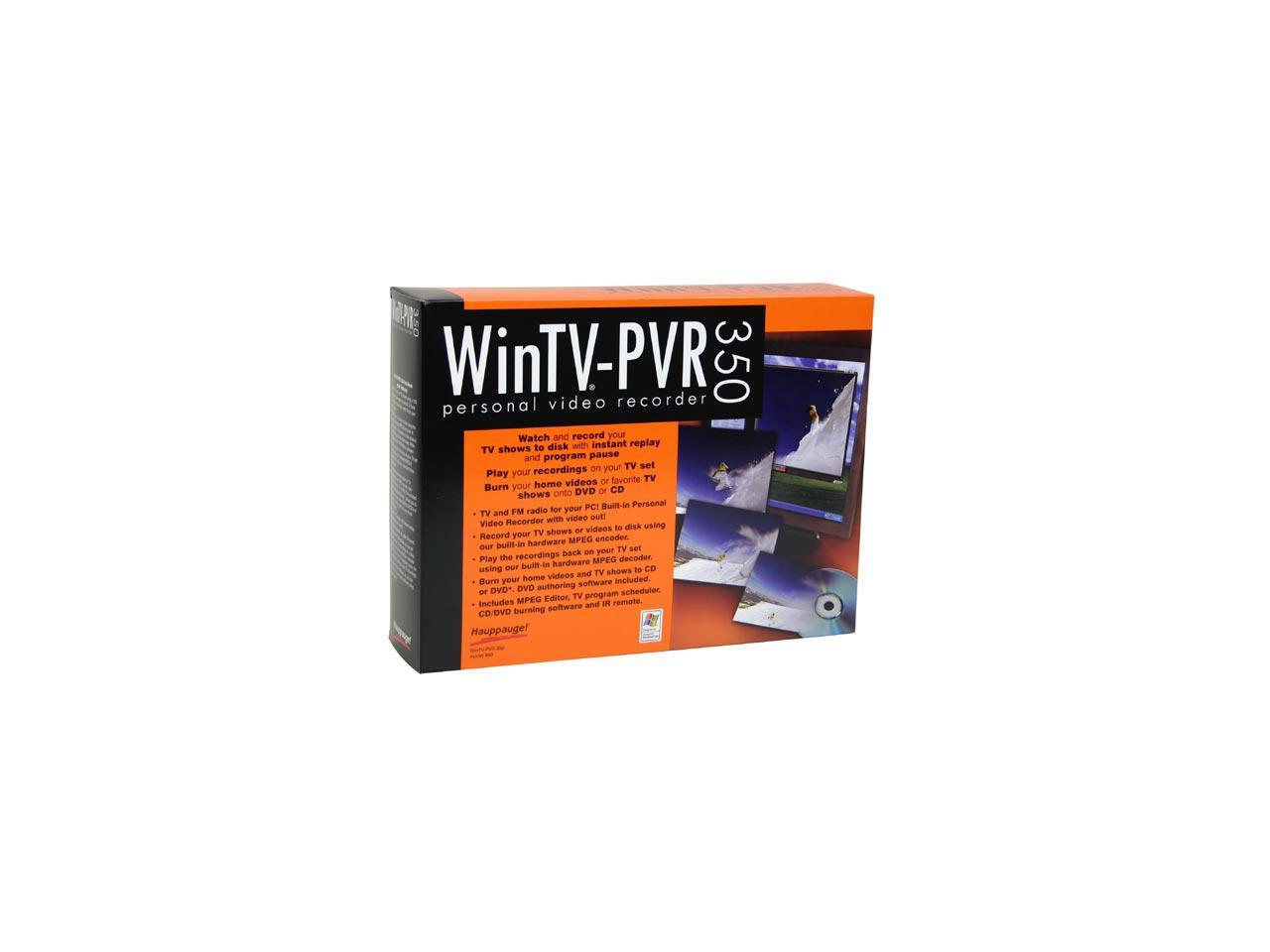 (65) Write a Review
OUT OF STOCK.
Specs
Reviews

Comments: I've had this card for several weeks now; I bought it along with a 120 GB hard drive to save football games. Boomer Sooner! A few notes: - This card has hardware encoding. Hardware encoding means the card itself encodes the channel being recorded to mpeg. It also means only 5% of my AMD 1800+ processor is used while recording shows. Software encoding would eat a huge chunk of the processor, and would be more likely to have jumps or glitches in the recording. Hardware can only encode to mpeg, while software (not included) can encode to anything. You can use hardware to encode to mpeg, and software (not included) to convert it to your format of choice - The hardware decoding works only with mpeg - The TV-Out is S-Video. That second coaxial port you see in the pictures is for the FM radio, not for TV-Out - You must watch what you're recording - You can pause live TV whenever you'd like for as long as you'd like (or until your buffer gets too big to fit on your hard drive) and you can rewatch live TV - The remote isn't a big deal to me; I'm at the computer anyway, so clicking or typing in channels is easier than finding the remote and typing in channels. It does work well, though, and provides some additional features - The radio gets FM only. I know it clearly states "FM Radio" but for some reason I still spent 20 minutes trying to switch to AM. The radio comes with a large, unobtrusive antenna. My antenna is flopped on the floor under a pile of clothes, and the Sports Animal is currently coming in crystal clear - You can't watch TV and listen to the radio at the same time. The card can only do one at a time - The TV Tuner is somewhat video card intensive. My GeForce 4 TI 4200 has no problem, but a decent video card is recommended - Everybody in your neighborhood receives the same cable signals. Homes that don't pay for certain channels (HBO, extended vs basic, etc.) have filters physically placed at their homes to block channels, while houses that do subscribe have no such filters. When digital cable first came out, rather than adding new digital filters to every person's house then taking the filters off for digital cable subscribers, the cable companies simply send the digital channels to everyone scrambled. They then give individual digital cable subscribers cable boxes, which (among other things) descrambles the digital channels. Therefore, while analog cable (basic or extended) can be used by this TV tuner straight from the wall, the card must receive all digital channels from a cable box. I think you can buy an IR cable to connect from the card to the front of the cable box so the computer can change the channel - The bundled mpeg editor is useful for cutting out space filling commercials. However, when editing 16:9 recordings, the editor saves the commercial-free version in 4:3, distorting the image. Oddly, after compressing it to .wmv (compression software not included) it becomes 16:9 again. Haven't found a work around - Software that allows you to create chapters and menus and stuff is also bundled. I have no DVD burner so I haven't used it much, but it seems promising - The bundled television/schedule software is adequate, but I use Beyond TV from www.snapstream.com (I used the 30 day trial version, and after two weeks they sent me a $10 discount to buy) - When recording with Beyond TV in "Best" quality, shows are 3 GB/hour; in "Good" quality, shows are 2 GB/hour. Best is DVD quality, and Good looks fine on full screen (1280x1024). Beyond TV can convert the files to .wmv format, essentially shrinking them as small as you'd like. Of course, the smaller you shrink them, the worse the quality - The TV-Out functionality is not currently supported by Beyond TV, though it is by the bundled WinTV software. I believe you can TV-Out through your video card, if your video card has that capability, though it's likely to be inferior quality to the PVR-350's TV-Out. I don't use TV-Out - Newegg took a week to deliver this to me (ordered Thursday evening, received Thursday afternoon). Though it's partially my own dumb fault for ordering on a Thursday evening. You still rock, Newegg!

Pros: The card and software were extremely easy to install. Excellent clarity in picture quallity. Much better than my Kworld Video Magician card. The tv picture from the PVR 350 is exactly the same as my new 36" Panasonic flatscreen. Easy to capture video from tv to a VOB file and then burn to DVD. If you want a great tv tuner card, I highly recommend the Hauppage WinTV PVR 350.

Cons: Radio reception is limited due to the location of my pc.

Overall Review: This is my third tv pci card and by far the best.

Pros: This card has everything I've ever wanted in a tuner card. Great picture, sound, and compatibility. The best part is the AV out that most cards don't have. When used with a television and a program like SageTV, it is a complete TiVO system. Guides and Timeshift all on the television, computer doesn't even have to be playing anything.

Cons: The only con I can think of is that there is only one tuner on the card and they don't make a dual tuner card with A/V outs like the 350, but still gets a 5 because it does everything it says it does up to par.

Overall Review: I don't understand why the 350 is the only card with A/V outs. Its the best feature ever, if you use a program that utilizes it.

Pros: Great card, I did not think the picture would look as good as it does. I AM IMPRESSED!!!!

Cons: The only problem I have with this card is the radio function. When the radio is turned on, I get sound for 1-2 seconds and then no more music.

Overall Review: I checked the FAQs at Hauppauge.com and verified my drivers. I'm waiting for a response from tech support. I hope I don't have to return this card over a radio function.

Pros: It does exactly what it says it can do and it does it quite well. I've recorded movies sporting events you name it and with full control over the quality of the recording, you can customize it for a dvd or your computer.

Cons: The added Radio FM tuner included on the board was a nice extra but i was a little bummed out by the fact that your not able to record the audio stream and your not able to listen to AM channels.

Overall Review: Overall its a great card I hope that Hauppauge will create some sort of recording software on its website that will allow recordings off the included radio player.

Pros: This was VERY simple to install as long as you follow the instructions. I have had this bad boy for 5 months and has not failed me yet.

Cons: Software from them is kinda ugly to look at. Read below for a great suggestion.

Overall Review: I use media portal to use this tv tuner card. It is the same concept you see on media center pc's and it is free to download at sourceforge.com.

Pros: My bedroom TV finally died, so I decided to use my old Athlon 3200+ as a TV unit. So far, DirecTV to computer looks good on my LCD monitor.

Cons: Analog Tuner is a problem if you get your signal over the air with Digital TV coming. This card must have been around a while, as the latest drivers from the website are dated 2005 and the Ulead SE is V. 4 ( I have v. 11 so this isn't a problem ).

Overall Review: It would have been nice if they had included an S-Video cable as ther are no RCA plugs on the card (not enough room with Radio coax connection). TV coax is connected through a splitter from the DirecTV box and looks OK, but I'm told it will be a lot better thru the S-Video cable, which I just ordered (from Newegg...where else???)

Pros: Great quality, able to record one channel whie watching another. Easy to use interface and remote. FM radio reception is crisp and clear.

Cons: No captions capable. WinTV creates a default directory of "c:\my videos" as the live stream buffer and pause TV mode buffer. Only way to fix or change the directory is a registry hack.

Overall Review: The customer support was excellent in telling me how to change the default buffer directory in the registry. I suggested to them that this directory should be able to get changed from within the WinTV application. If you have another TV near by on the same channel you can see the 3 second delay from the buffer. It is not a pro or con, but interesting to point out.