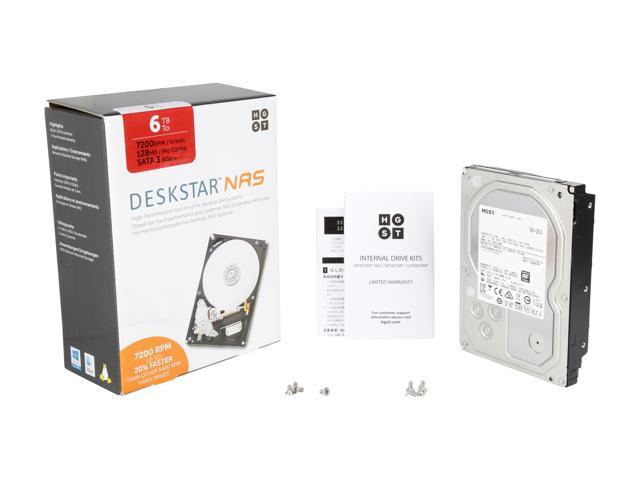 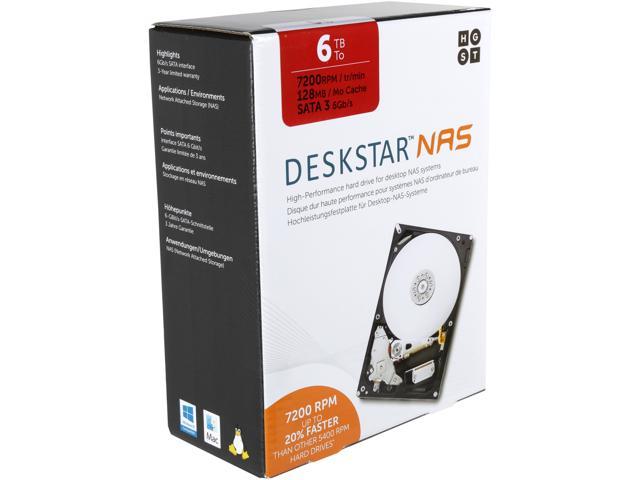 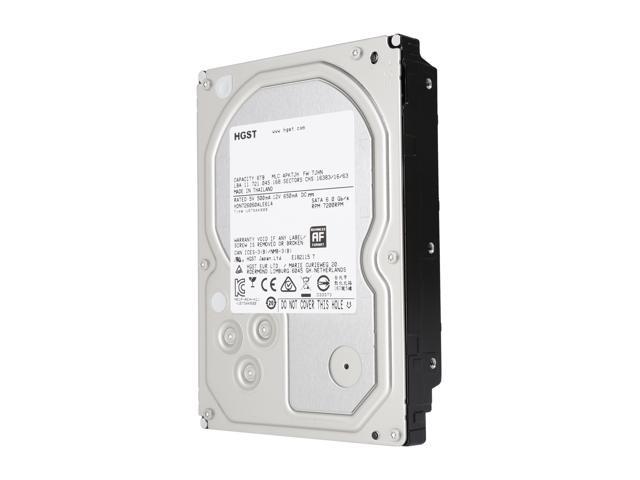 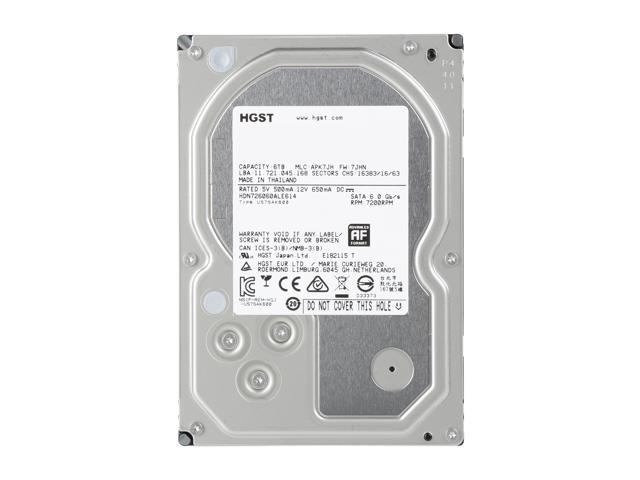 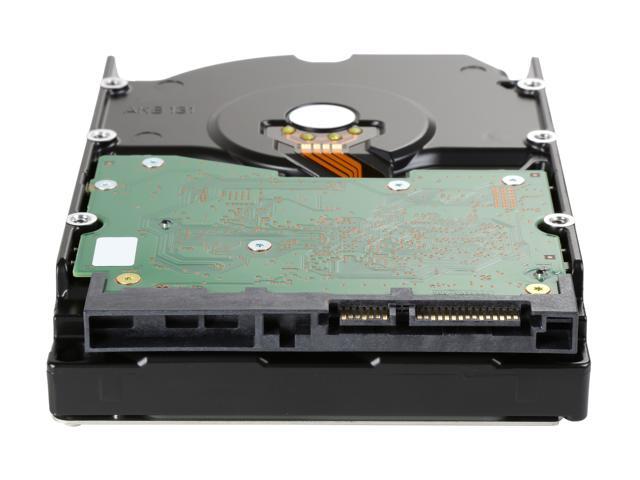 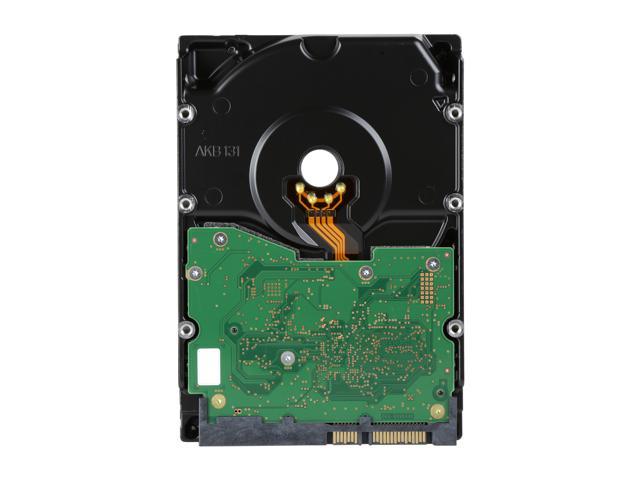 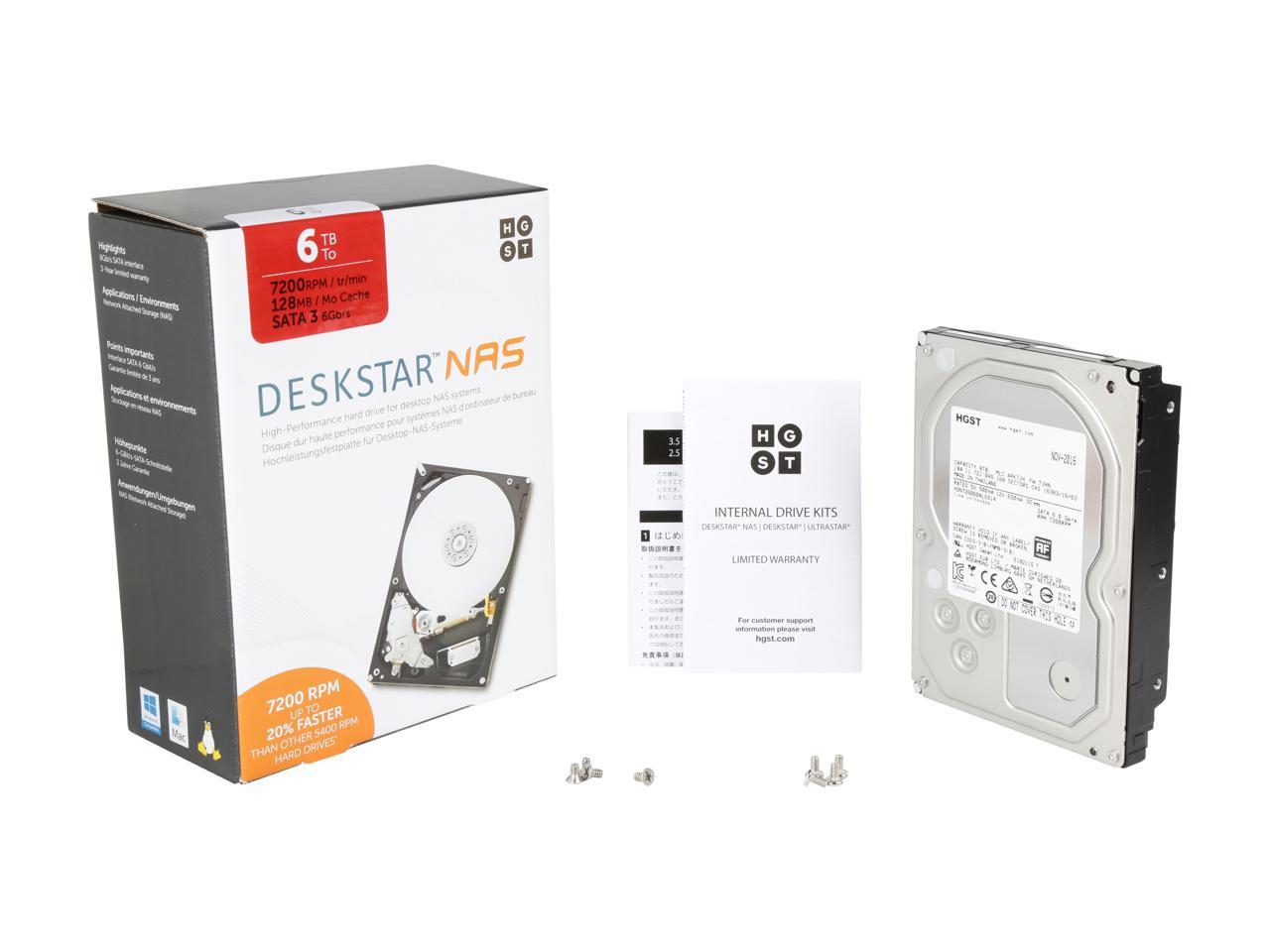 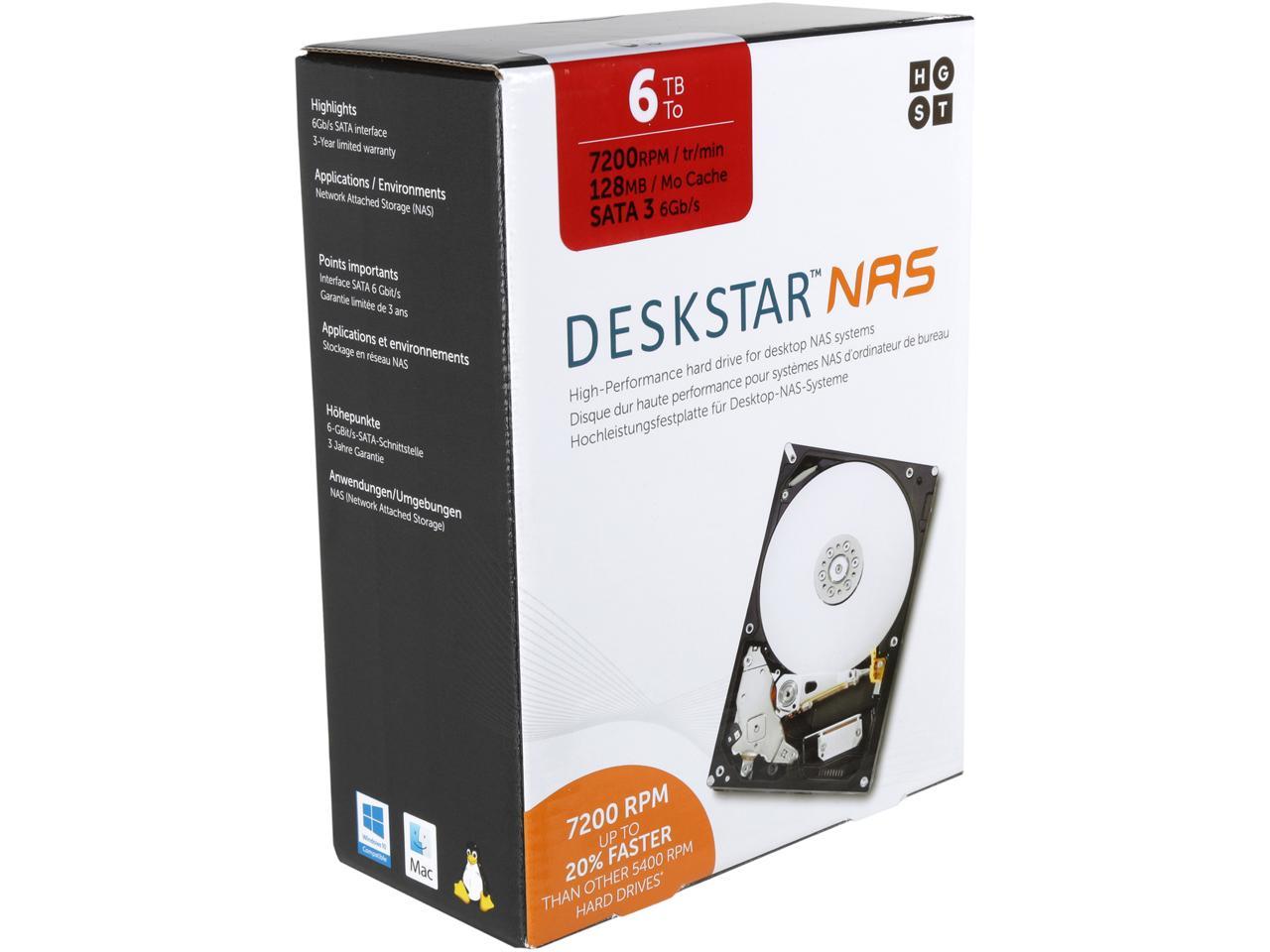 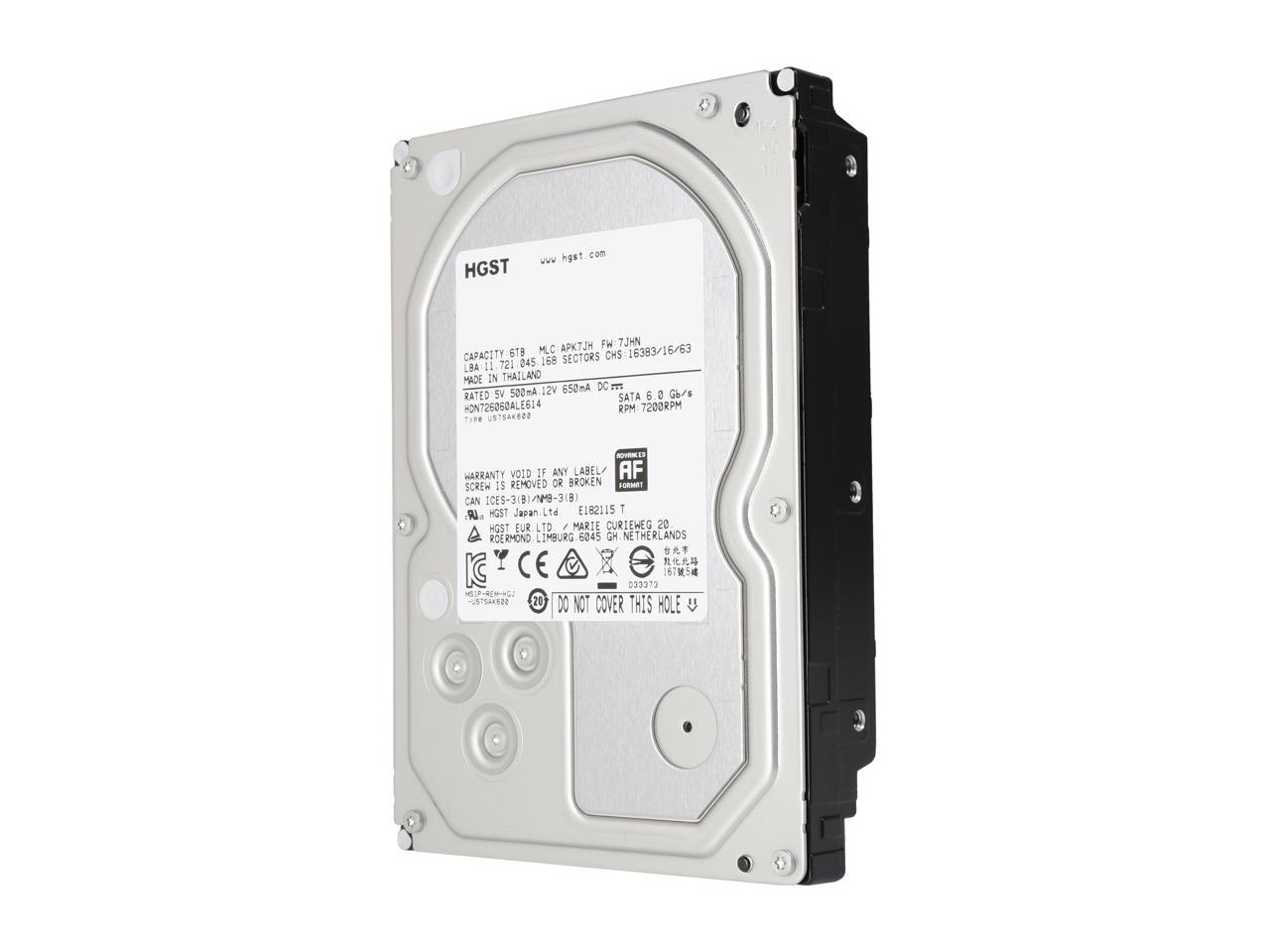 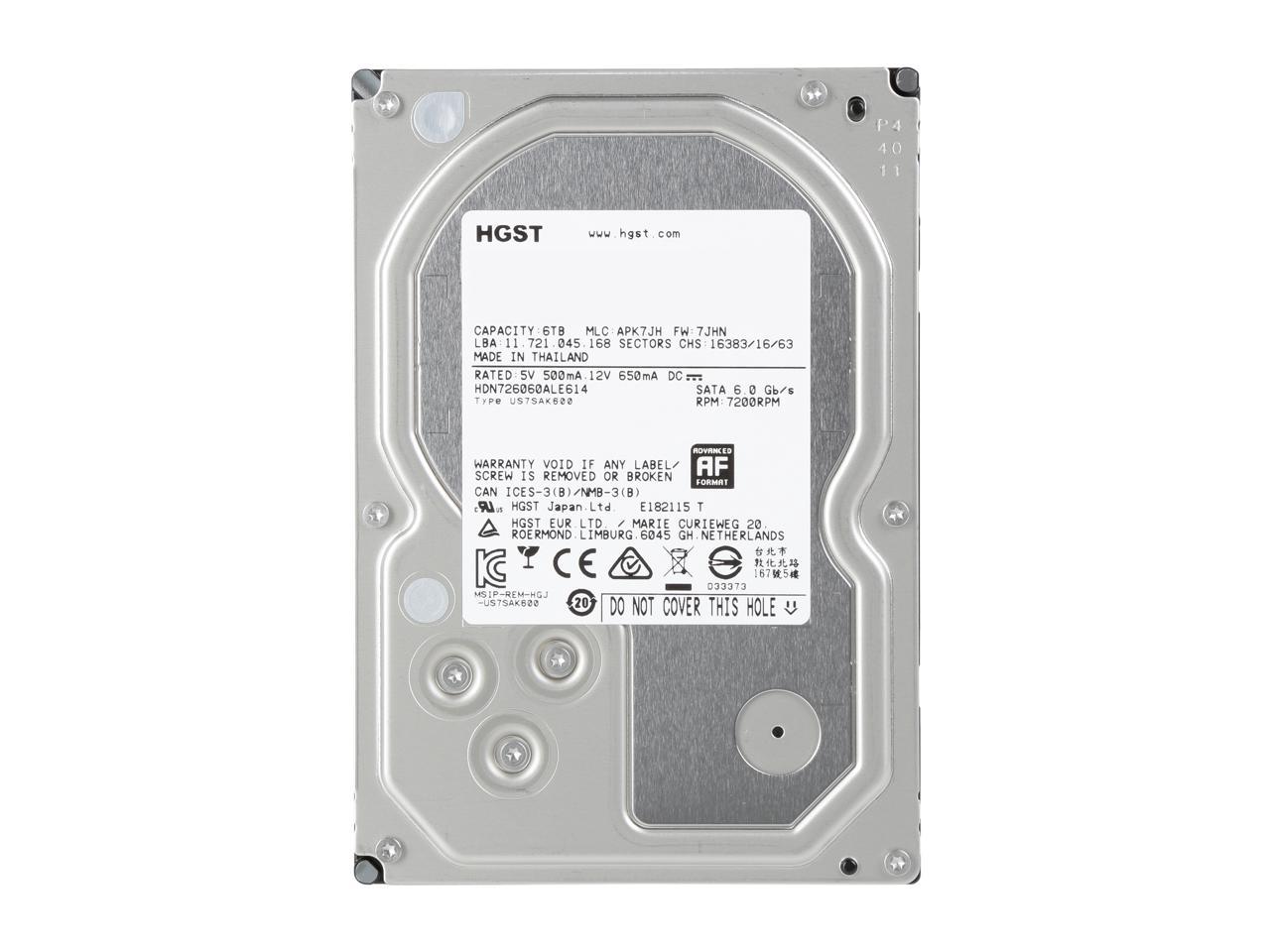 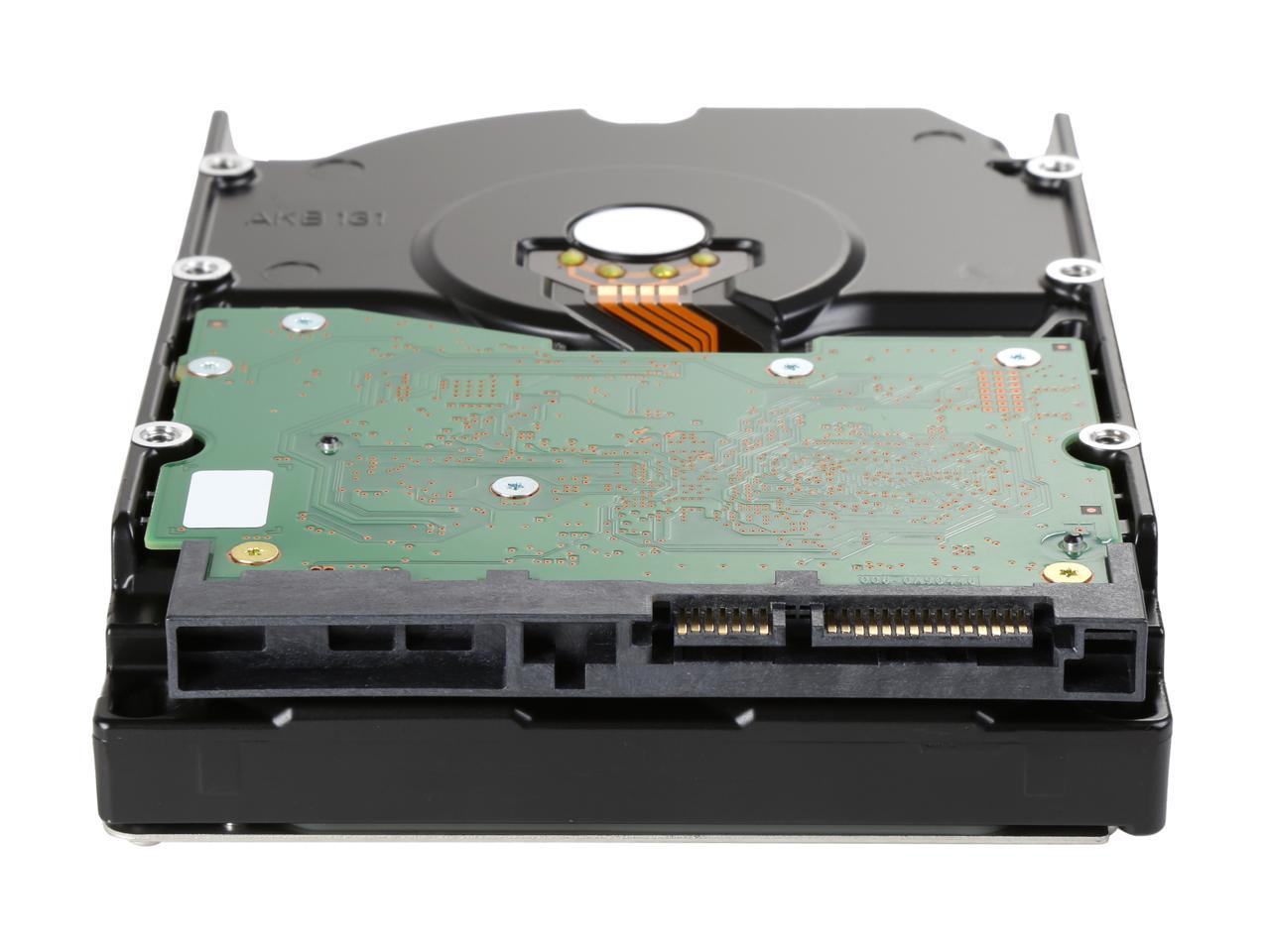 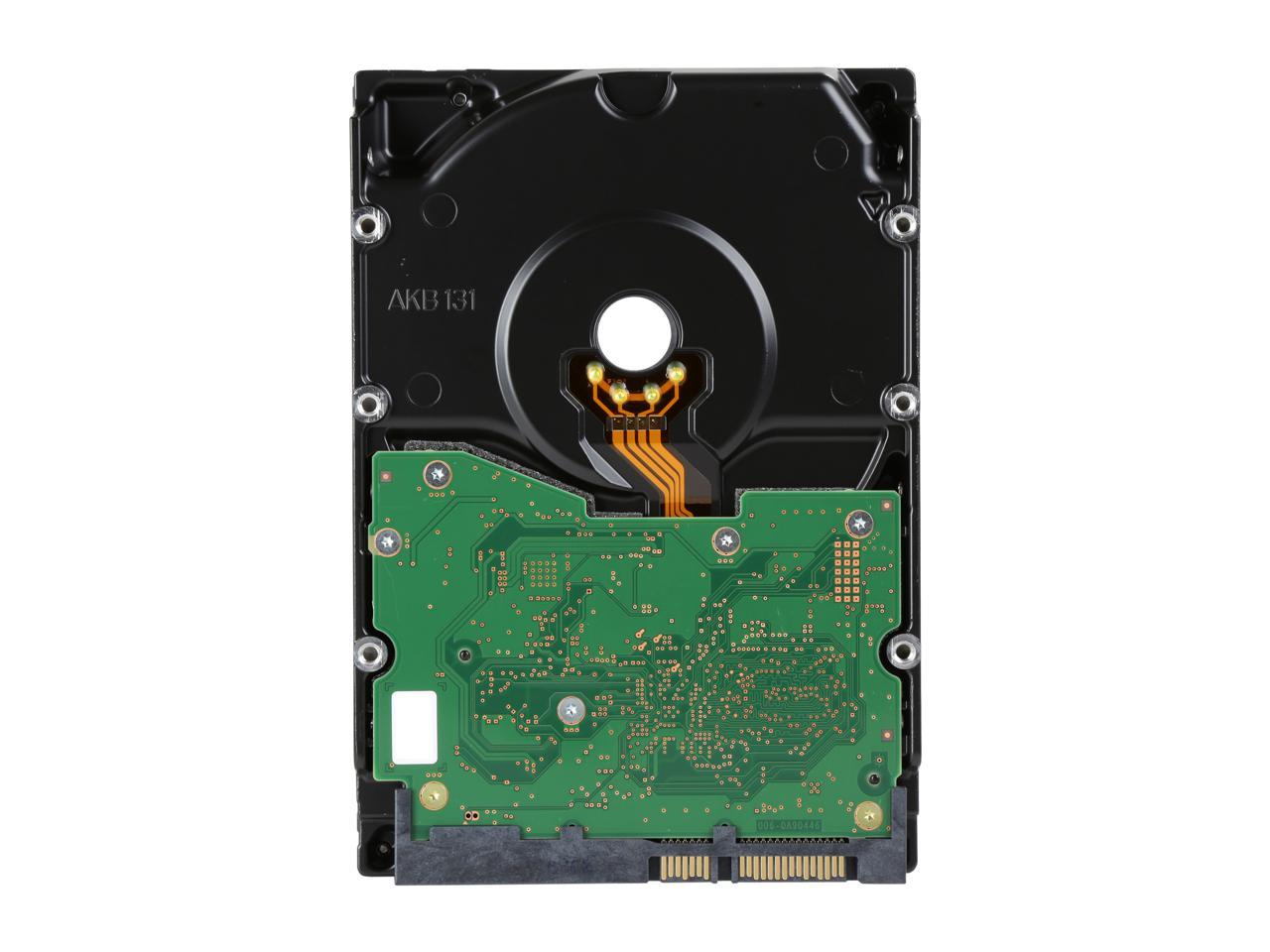 With an exceptional blend of performance, quality and reliability, the HGST Deskstar NAS 3.5" 7200 RPM Hard Drive is specially designed for consumer and commercial desktop NAS systems. It's available in 8TB, 6TB, and 4TB capacities.

The NAS-ready 7200 RPM hard drive delivers media transfer rates that are as much as 20% faster than 5400 RPM drives and seek times less than 12ms. It incorporates a rotational vibration sensor which anticipates disturbances and counteracts them in multi-drive environments, maintaining high input/output performance. It has an MTBF of 1M hours2, ensuring incredible reliability.

The HGST Deskstar NAS hard drive is designed to the highest quality standards with field-proven components. It’s backed by HGST worldwide technical support and integration services, enabling customers around the globe to bring their products to market quickly.

2. MTBF target is based on a sample population and is estimated by statistical measurements and acceleration algorithms under median operating conditions. MTBF ratings are not intended to predict an individual drive’s reliability. MTBF does not constitute a warranty.

Cons: Hard Drive failed 32 days into ownership, too late to send back to Newegg. I started the RMA process with HGST, who is owned by WD, and heard nothing back for weeks. Contacted the company 18 days after the RMA was started, wondering what was going on. Received the following: "We are experiencing delays in processing some RMA’s which we expect to be resolved shortly. I apologize for the inconvenience and will escalate your RMA to have processing expedited so your replacement can be delivered as soon as possible." The next day they made a UPS shipping ID to pretend they're sending me a drive, and as of a week later they haven't even dropped it off to UPS. Unacceptable.

Cons: Developed bad sector in first few uses (not typical of this brand)

Overall Review: I've used HGST drives exclusively for the past 5 years. This is the first one to have any problem. I have four of them in my NAS and this was just to be a "stand-by" drive to have handy. But I formatted and used it as a temporary scratch drive a couple of times, just to check it out. Well, it soon developed a bad spot in a sector that was not detected by the original formatting process. That meant that a file written to it was not readable after that! Gone. Fortunately, I had another good copy, so I didn't lose anything. Upon erasing the file and writing zeros to the drive, the sector is now marked as "don't use". It should not be a problem in my NAS, if/when I use it there. The redundancy of the NAS will recover any such errors automatically. But WD now owns HGST. Their diagnostic says the drive "Passes" .. so it won't be replaced. HGST's have always been my "go to" brand. They are now on my watch list. Hope this was just a one time thing.

Overall Review: I have 41 HGST NAS drives. All but one was purchased from Newegg. Bought my first 4TB drive on 7/24/2014. Most of my HGST NAS drives are 4TB, 6TB or 8TB model. Four of them are now the 10TB drives. Of all the drives purchased since 2014, only had one 8TB fail. Returned it to mfg. They sent me a brand new drive in retail box. The 8TB that failed was only 8 months old. It was obviously just a lemon. I can live with one lemon out of 41 over four years. I am very happy with the HGST NAS drives installed in my NAS devices. I recommend HGST NAS drives to everyone.

Pros: Fast and relatively inexpensive for an HGST drive. Too early to assess reliability. I'll update as needed.

Cons: I'm using two of these drives as part of an archive (mostly offline, accessed via toaster). Both are reasonably quiet, except for a single "tock" noise every five to ten seconds that the cheaper Seagate Archive drives don't exhibit. Update: ended up purchasing a third one of these drives before learning that one of the other two was throwing SMART warnings about impending failure, over and above the bad blocks revealed by a surface scan. Rechecked the drive every month or so, with the same results. I've returned that drive to the manufacturer after getting an RMA. I'll likely stick with Seagate and WD from now on.

Pros: I received these drives about 7 days ago. Since that time these drives have gone through hell. I ran Darik's Boot and Nuke with the DoD 7 pass preset, verifying after every round and then did a long SMART test. All 4 drives I bought are running great.

Cons: Price hasn't really come down much since HGST first released the NAS line 3 years ago.

Pros: It's fast and runs slightly cooler than my 4TB HGST drives.

Cons: People seem to complain about how noisy HGST drives are. I don't think it's a big deal.

Pros: Two of the disks formatted cleanly, and a detailed scan by ChkDsk found no bad sectors. The third disk was DOA and is being replaced by Newegg.

Cons: One of three disks was DOA. The platters rotated, but the disk was not recognized by Windows in Device Manager. I know someone energizes HGST hard disks before they are sold because the SMART data always indicates a small amount of use, but a more detailed testing regime might prevent the retailer and the user from having to contend with a DOA unit and its associated costs.

Overall Review: I heartedly recommend HGST hard disks; they work well for the length of the warranty, and on the rare occasions when there has been a problem HGST tech support has taken care of the situation.

Pros: Works fine, as advertised. About the warranty, one review was over dramatic about a FALSITY that it stated, that supposedly it will apply a warranty from the date of sale to the reseller, which is plain wrong. As per the link PHILLIP V provided (the one who made that false statement), here's what it actually says (http://www.hgst.com/support/hard-drive-support/warranty-returns/warranty) : "A valid proof of purchase may be required to prove eligibility. If you do not have a valid proof of purchase, the limited warranty period will be measured from the date of sale from Western Digital to the authorized distributor." IN SHORT : if you don't have a proof of purchase, the warranty is measured from the sale date to the reseller. Which is still good, since many manufacturers who don't get a proof of purchase will simply deny their warranty.