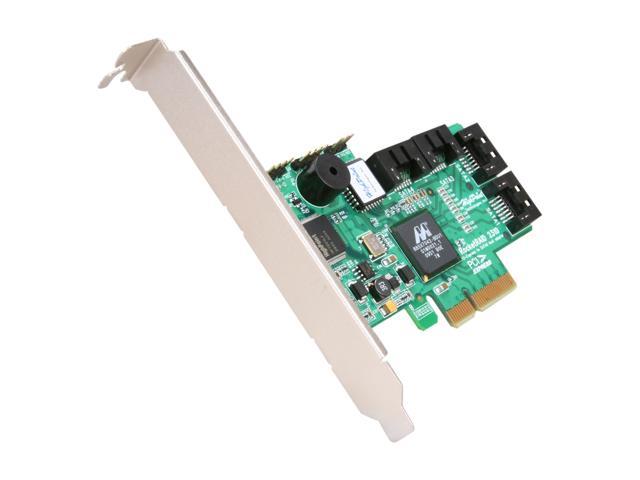 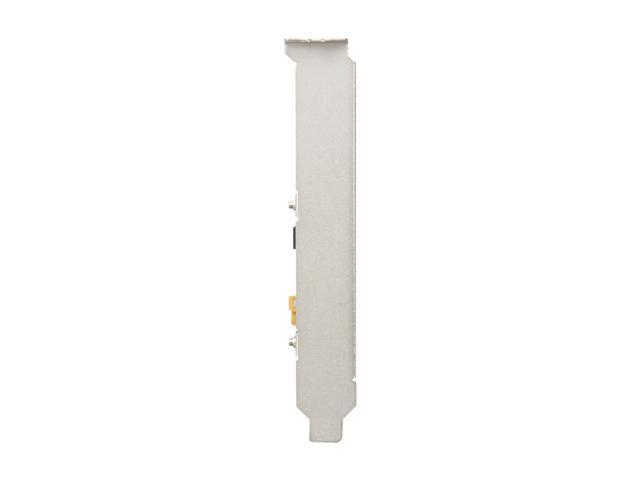 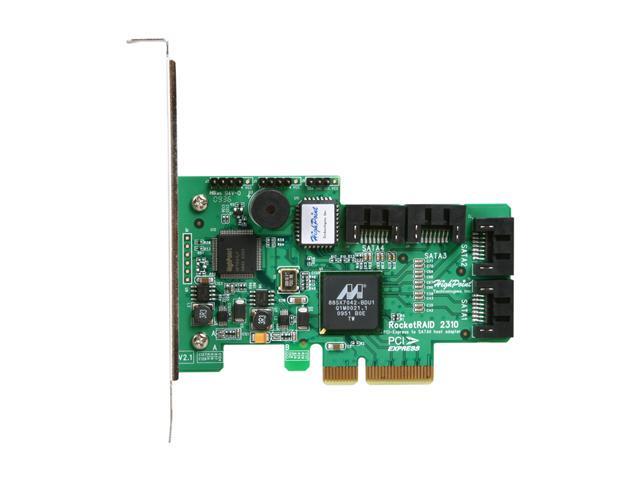 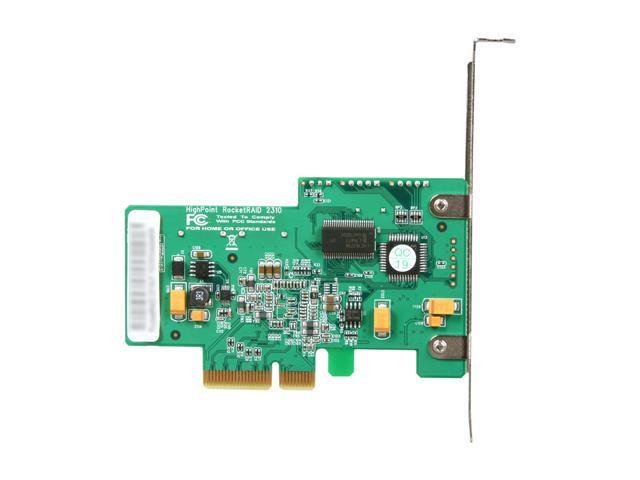 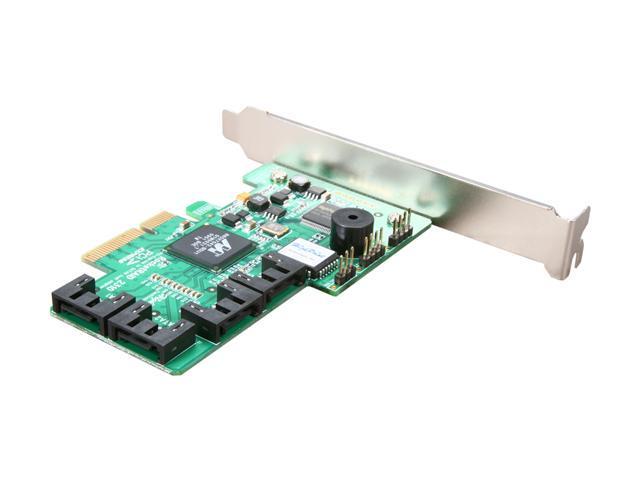 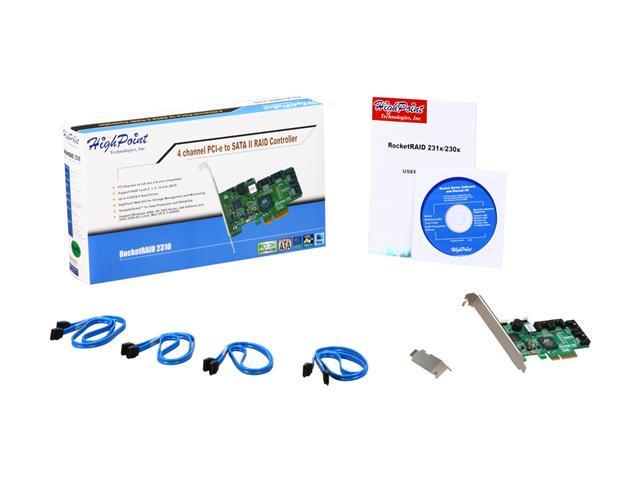 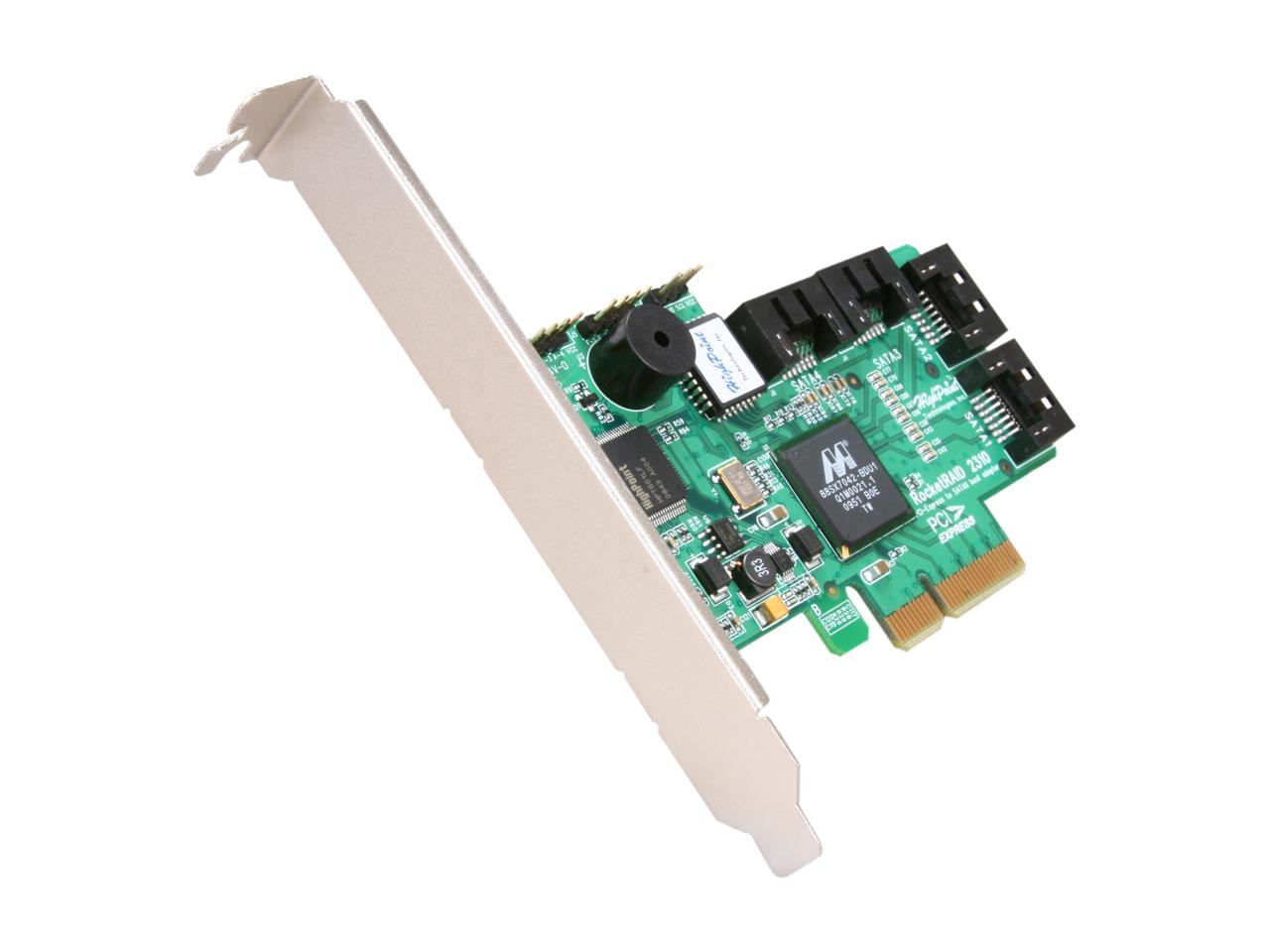 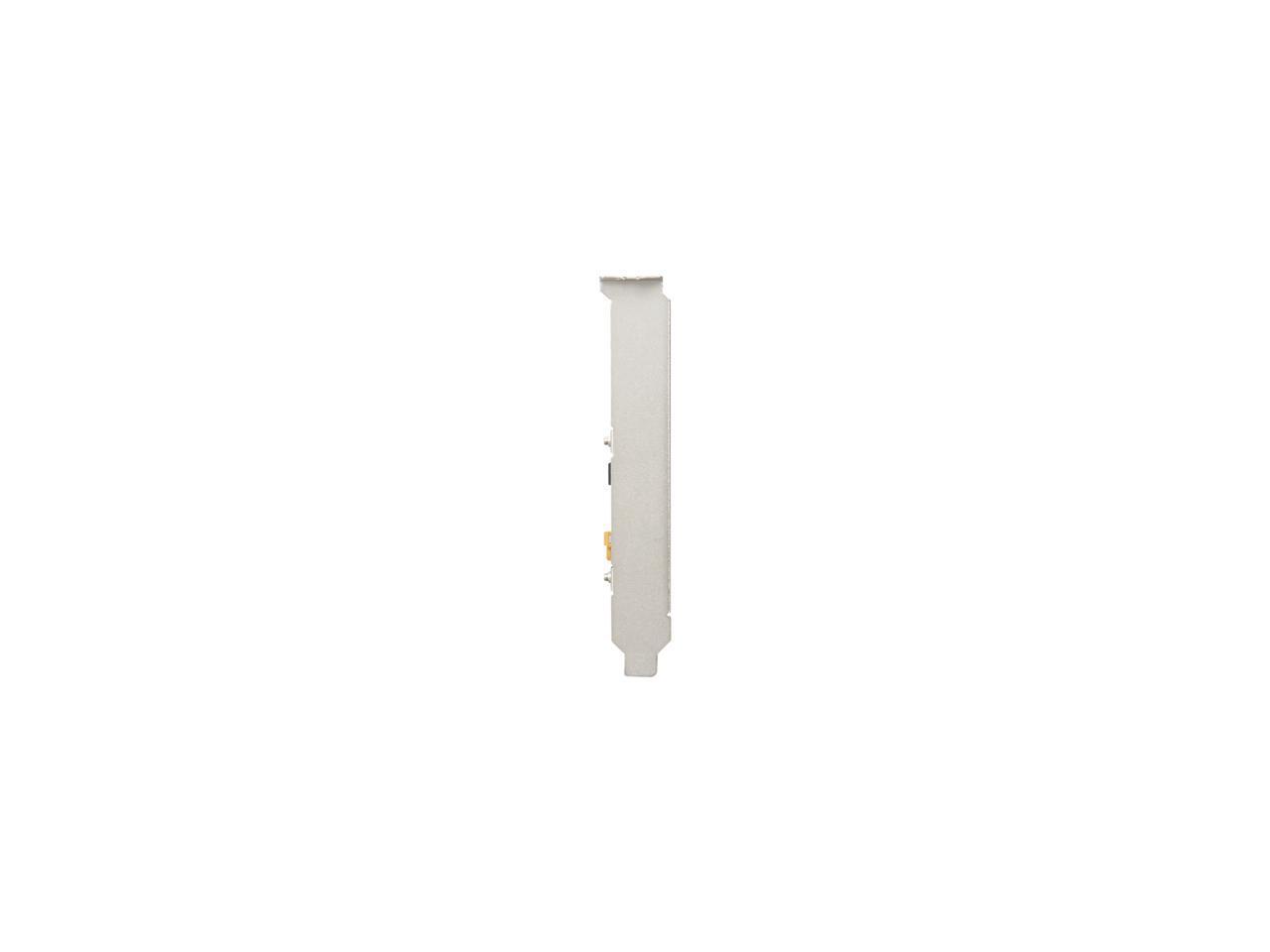 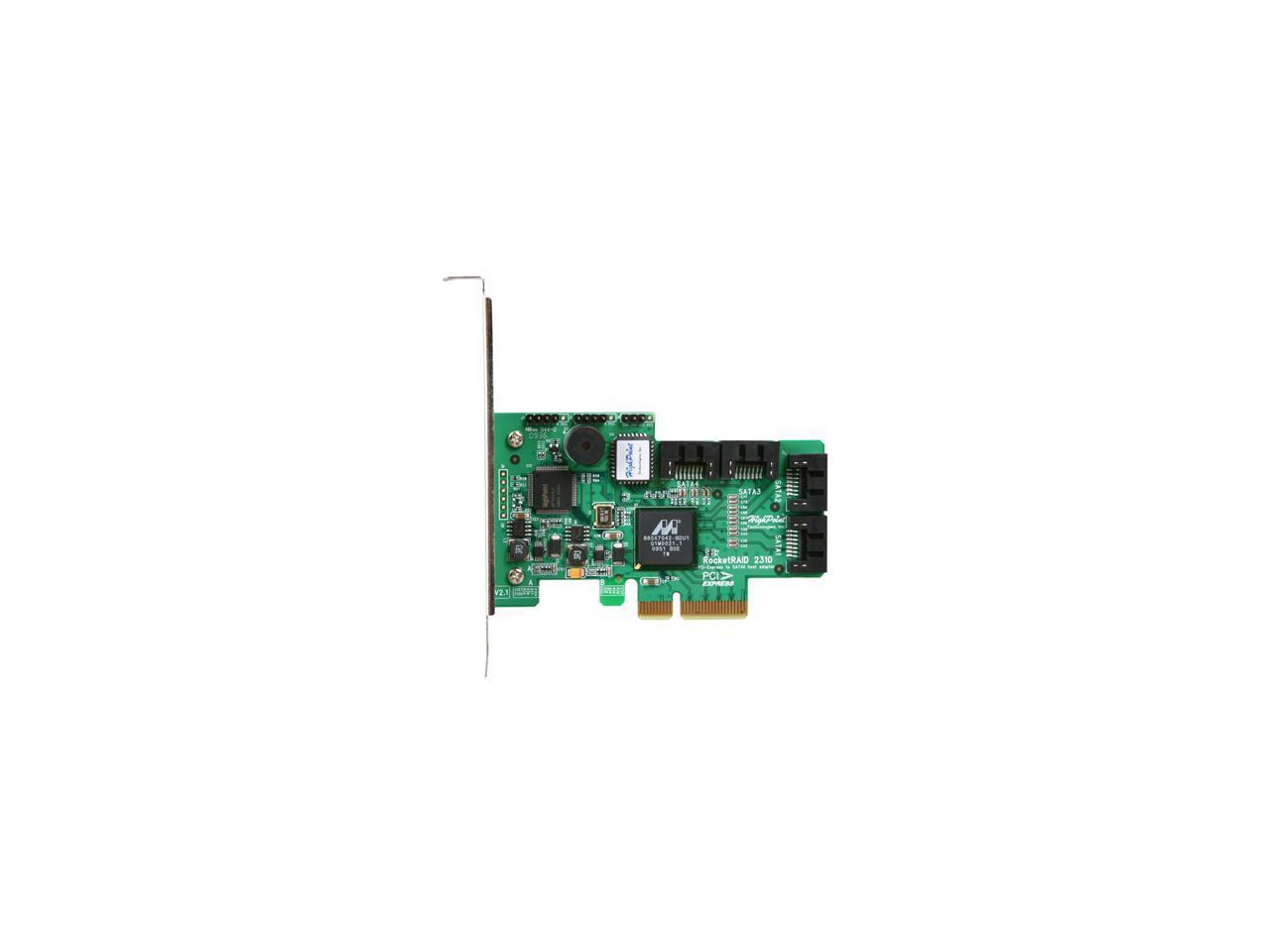 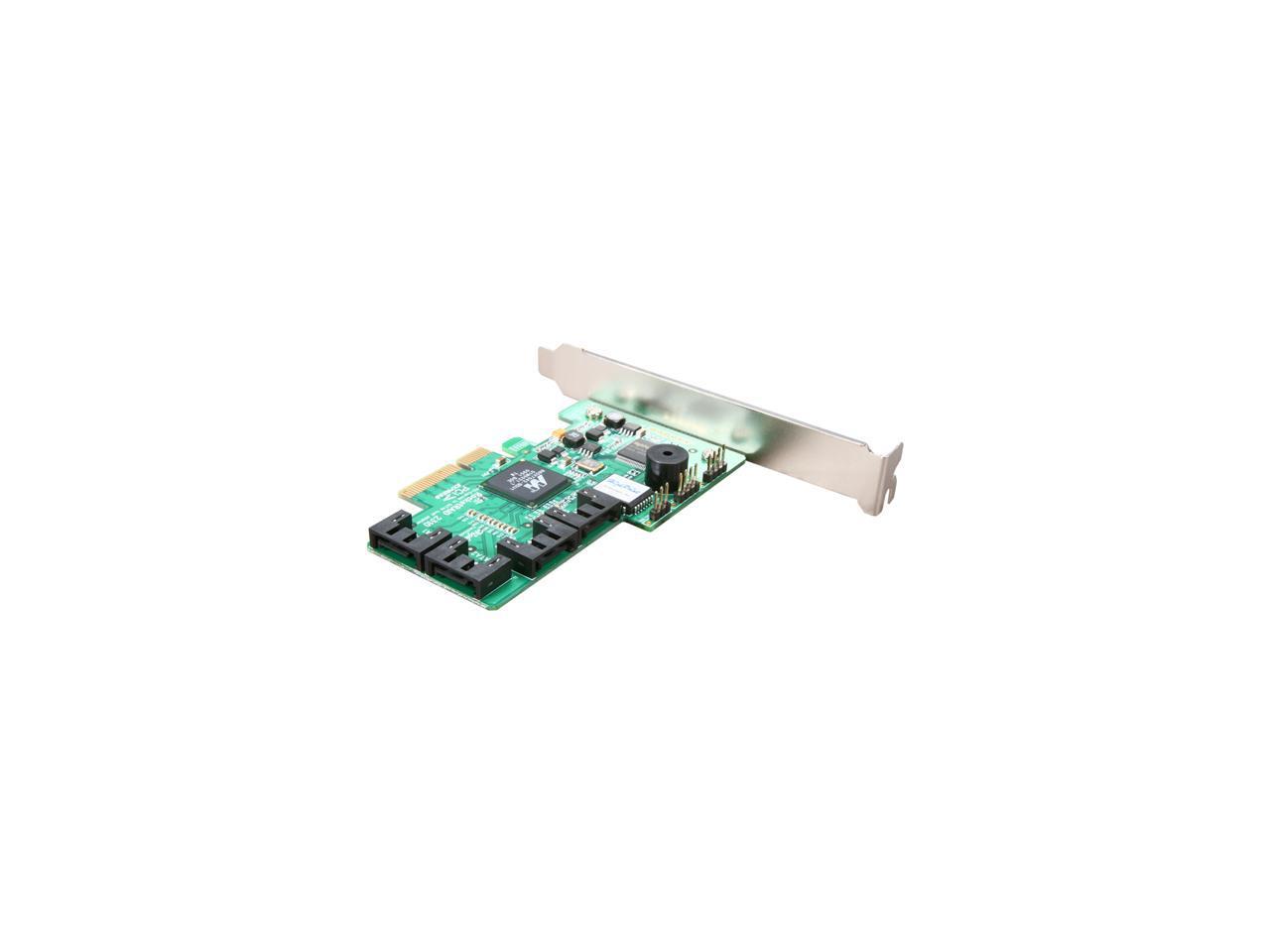 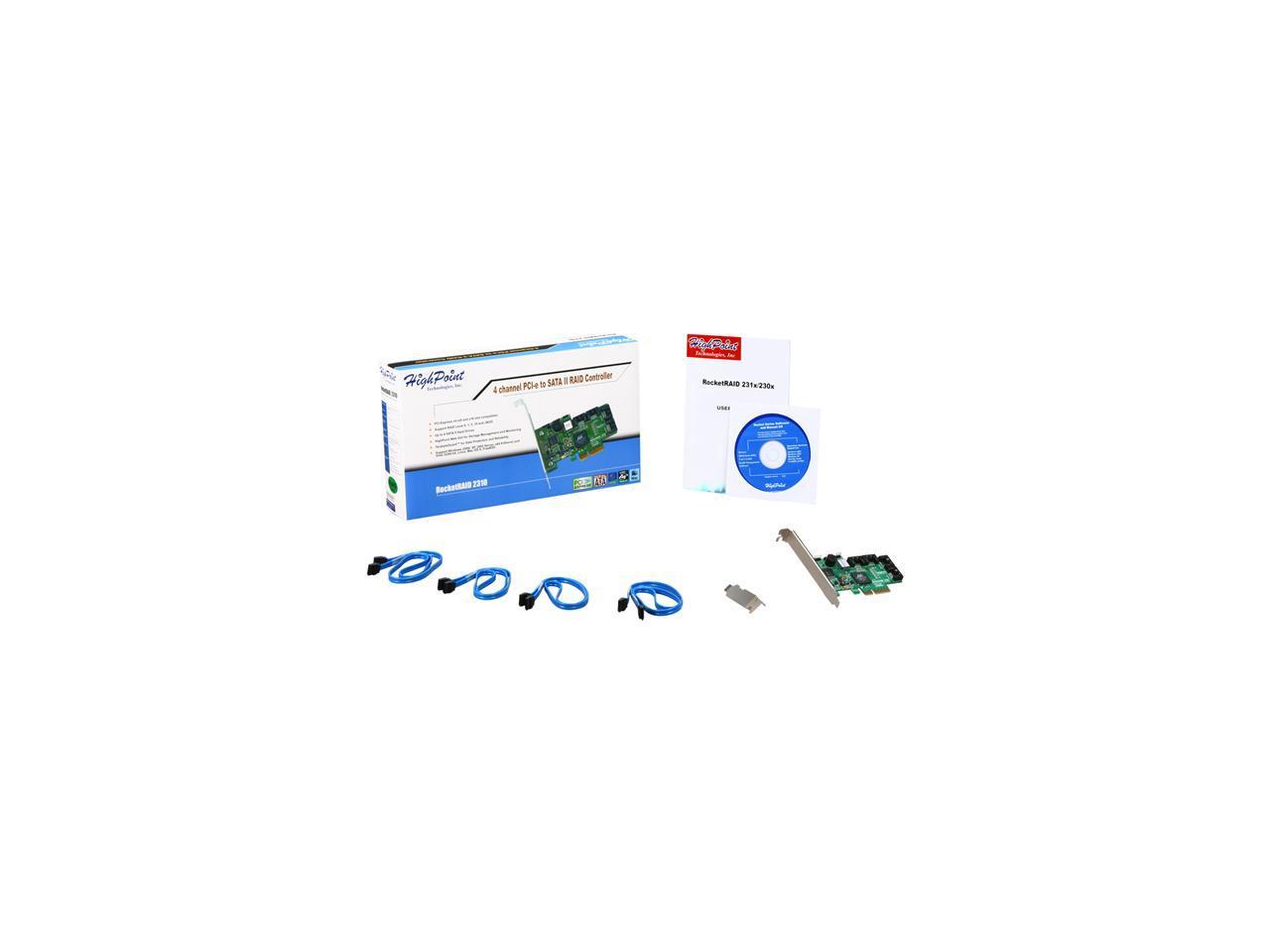 (80) Write a Review
In stock.
Ships from United States.
Most customers receive within 5-7 days.
Overview
Specs
Reviews
Supporting up to 4 SATA II and SATA I hard drives, the Highpoint RocketRAID 2310 PCI Express controller card is perfect for entry-level storage servers. Supporting RAID 0, 1, 5, 10, and JBOD, the RocketRAID 2310 can not only backup data but can also extend the storage capacity of a system significantly. Featuring a PCI-Express x4 (with support for x8 and x16) compatibility it's one of the few PCIe controller cards available.
Providing S.M.A.R.T drive monitoring for status and reliability, hot swap and hot spare drive storage, Native Command Queuing support, and web based RAID software, the 2310 is perfect for small to medium size business IT environments.
The RocketRAID card can also automatically rebuild the RAID array if a drive fails. Last but not least the 2310 supports a variety of operating systems including the following: Windows (XP, 2000, Server 2003), Windows x64bit, Mac OS X, Linux and FreeBSD.

Cons: Drivers are not bundled into many Linux distros since they are propreitary. The card is not yet supported by open-source dmraid drivers either. This means you will pretty much have to install/build the drivers separately, which can be difficult--not for newbies. The only other problem is that the management software comes in two packages that are incompatible with each other--you can either install the web-based tools or the command-line tools, but not both simultaneously.

Overall Review: I bought this card as a stop-gap, since the ICH7-R SATA RAID bundled with my mobo is not yet fully supported under Linux (this will change soon), and my budget for this build precluded a high-end card. Getting the drivers to work under opensuse 10.1 with kernel patches was pretty difficult (you should boot from another drive if possible), but once I got it working I have found the management software to be extremely impressive. Overall an excellent solution for low-cost SATA RAID under Linux.

Cons: Hard to use in X16 slots; unstable XP64 drivers; depends on CPU for many RAID functions ('not true hardware RAID' - but it's not $800, either)

Overall Review: I have used this board for six weeks in a MSI K8N SLI X16 Diamond, using the PCI-E X4 slot on the board; previously I tried it in secondary SLI X16 slots on two MSI K8N Platinum mobos w/unstable results. It seems to be happy in the X4 slot or else it is the mobos looking for a GPU in the secondary SLI slot - I don't know. Tried in XP64 - drivers unstable. Management software is adequate but UI is funky.

Cons: Absolutely does not work under Ubuntu Linux Server 10.10

Overall Review: Should have done more research before I purchased this. Highpoint has not addressed their Linux drivers since 2009. Vendor offers no support.

Pros: Inexpensive. Reliable. Support is consistently responsive. SMART-enabled. It survived a failure for me, so I'm sold as a customer!

Cons: Management program is a little klunky. No SMART error alerting capability (must check manually), and no interface for other SMART monitors to use. Cannot get email alerting to work with Gmail even after working with support. No rebuilds from controller BIOS. Rebuilds must occur with OS up. All that I/O is bad when array is critical. But for $130 I guess I didn't expect an on-board parity chip. Keep your OS on another controller (best practice anyway).

Overall Review: I recently survived a failure and just wanted to voice some confidence in the rebuild performance and support of this controller/vendor, since those were the primary variables I was looking for an inexpensive RAID card. I purchased the 2310 about 2 years ago to run 4x 500GB drives in a RAID5 array for our home media server. It has performed fine during that time. I was recently alerted to a drive failure by a loud alarm from the controller. I replaced with a spare I had handy and it rebuilt in about 70 minutes (I have a C2D e6600 -- it uses your CPU for parity calculation so slower CPUs will take longer)!!! I assumed the rebuild would take hours at this price-point. Highpoint support has never taken longer than 1 business day to respond to (non-urgent) emails -- excellent in my opinion. I have never tried their phone support. I was going to give it 4 stars b/c the cons, but b/c of the good support and performance at this price-point, it gets 5 stars for value.

Pros: The card works and does mostly what it says. It is small and fits in for a PCIe without problem. The web based RAID management works well with no problems.

Cons: They have a bug in their drivers for Mac OS 10.4 which they won't fix. It will generate a runaway kernel task which will use up 80-90% of your CPU. Thus, your dual mac becomes a single CPU because one of your CPUs is running in circles. This continues even when the machine in idle (so it isn't the software RAID doing its work). When I reported it, they said they knew about it.

Overall Review: They claim their other cards have not has this problem reported. I have to remove the RAID and uninstall the drivers in order to get my work done (its CPU intensive).

Overall Review: I put this card (the second one I own) into a new Asus P5B-VM; it fits OK, a bit tight on the IDE connector. I could then access the card's BIOS screen during boot up but it didn't see any of the 3 x WD3200KS drives connected to it. Tech support were good and immediately sent me an email with the new BIOS and programs to apply it.

Pros: Unlike its cheaper brother the 2300, this card is PCI-E x4. Which is the same card with a different interface. Read the reviews for it too before deciding if your going to buy. Their support actully did respond to my posts, but their suggestions were useless.

Cons: Personally it took me Days to set it up because of the drivers, incompatible card BIOS, and the interface software ( I had a problem with everthing but the box it came in ). Long story short, the OS was having trouble recognizing the card. I think the drivers are incompatible with W7 x64 (their flash program is 16 bit) I ended up booting to 2 other OSs before it was able to properly connect and update the drivers & card BIOS. Only to find out the cards BIOS are interfereing with the system BIOS causing me to power on the comp, turn off the HDDs, wait for the RAID to fail and the OS to boot, then power on the HDDs. If I dont do this it won't boot. Highpoint recomended a flash via DOS but their flash utility freezes and they just keep telling me to try it again. Get another card if you are using WD hard drives. From what Ive read they dont support WD, and If you use the ORLM to change a WD array it has a good chance of permanently bricking the HDs, and losing your data.

Overall Review: Cons Cont: Highpoint doesnt support WD drives so do not expect help from them if you run into an issue. I did not choose WD drives (and still had problems with it) because I wanted to go with this card, I like WD and never had a problem with them and now Im returning this card and stuck with the HDDs. It throws out an error after the BIOS load that reads: and I quote "Warning have option rom cannot be invoked". Yea now I have to see that... jibberish every time I boot. Support didnt help resolve any of my issues. 50 MBps slower than 3wares 9650se without the battery back up. ( I returned this and got the 9650se ) Software is limited. Other: It adds about 30 seconds to the boot time. Do not use the connection they already have set up, use Localhost:7404. It took twice as long as the 9650se it initialize the array.

Pros: I'm running 3 2TB Green drives off this card for my server and it works great! It's small and works great even in a PCI-E x16 slot. Using this with Fedora and had to get the source for the driver and compile it myself. After that it's been working great.

Cons: The blue cables it comes with smell like chloraseptic spray, it's odd.

Overall Review: Make sure to setup the RAID in the RAID cards BIOS. Might need to build the driver from source when using with Linux. Otherwise a great card!