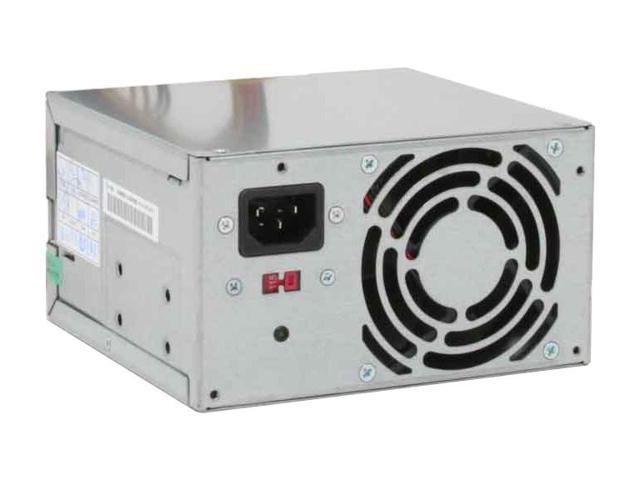 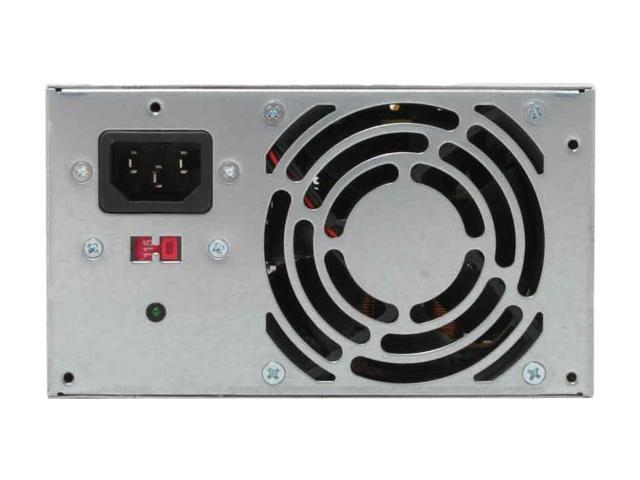 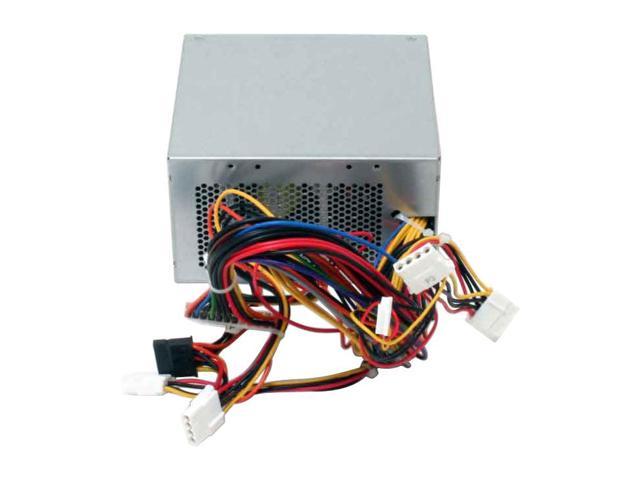 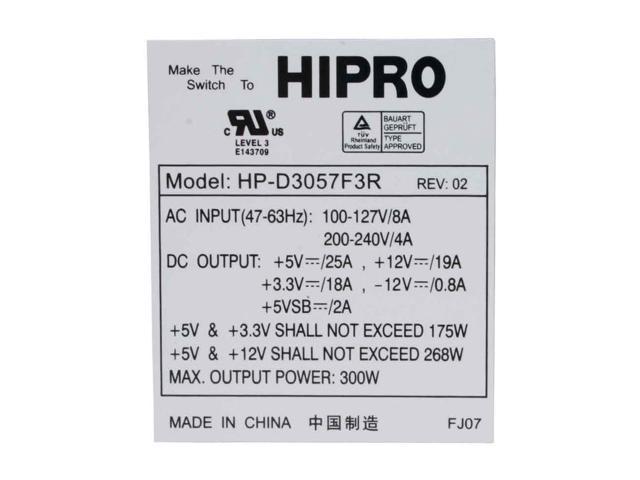 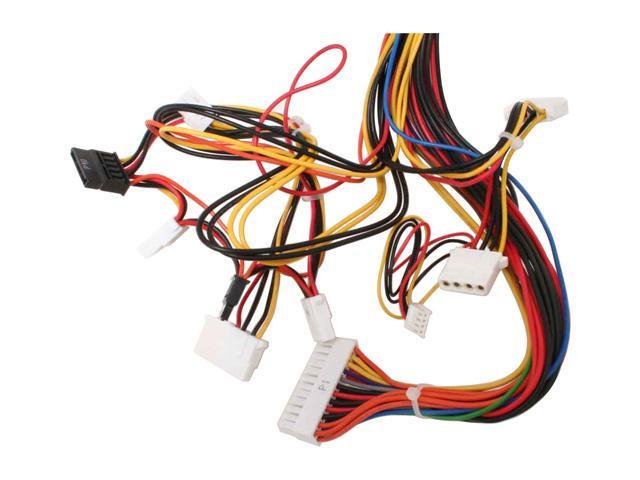 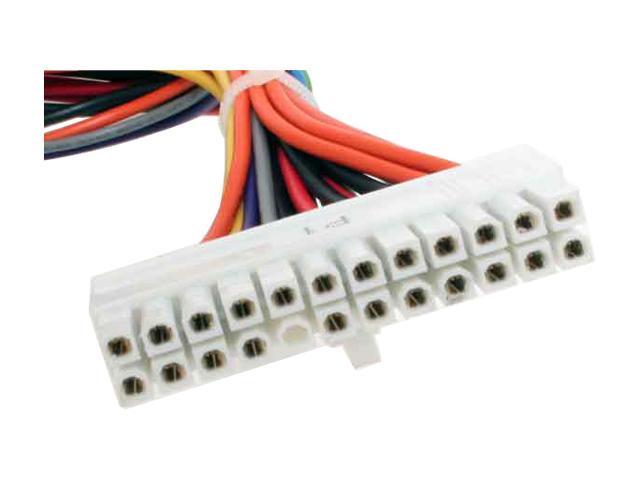 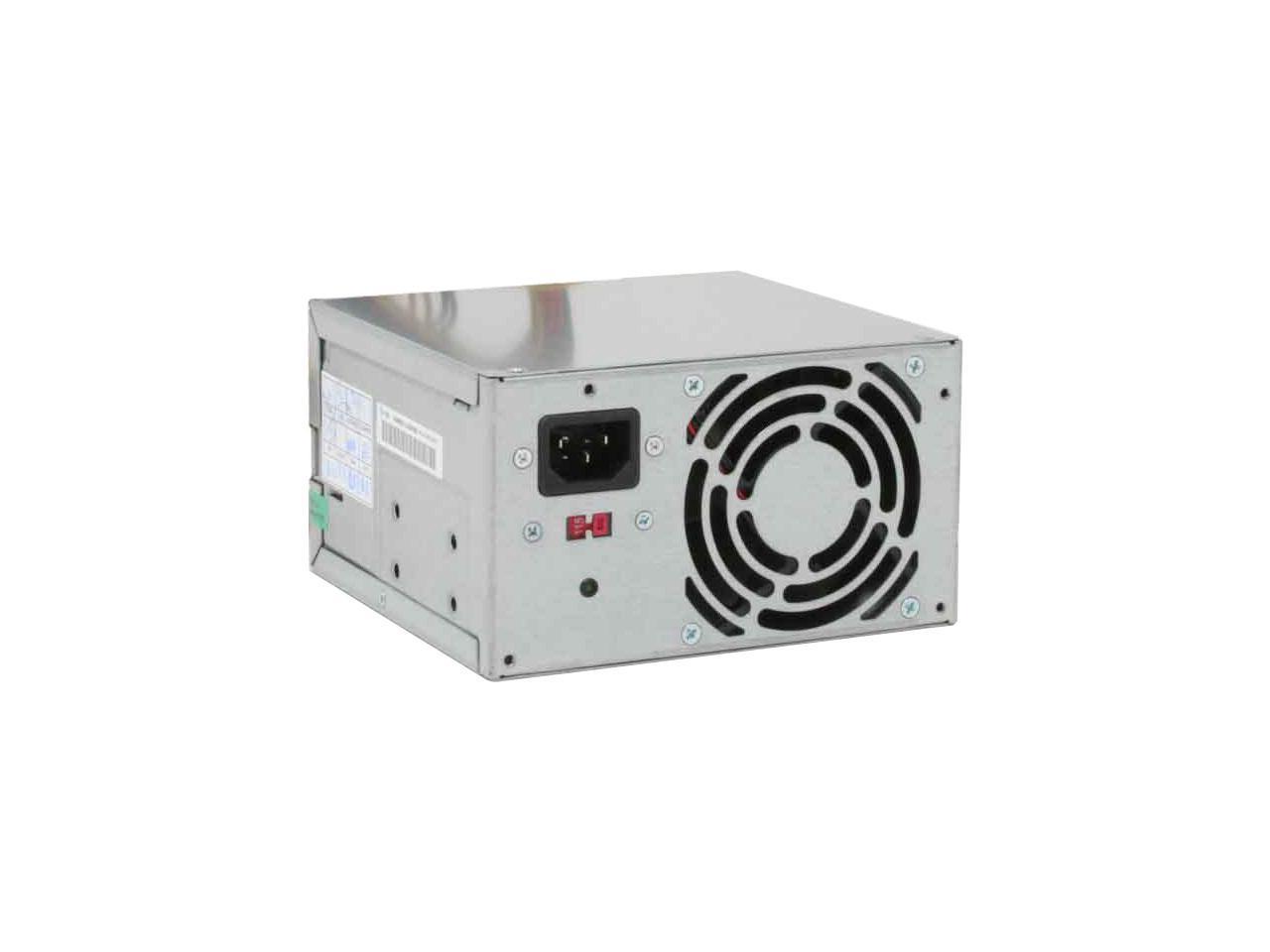 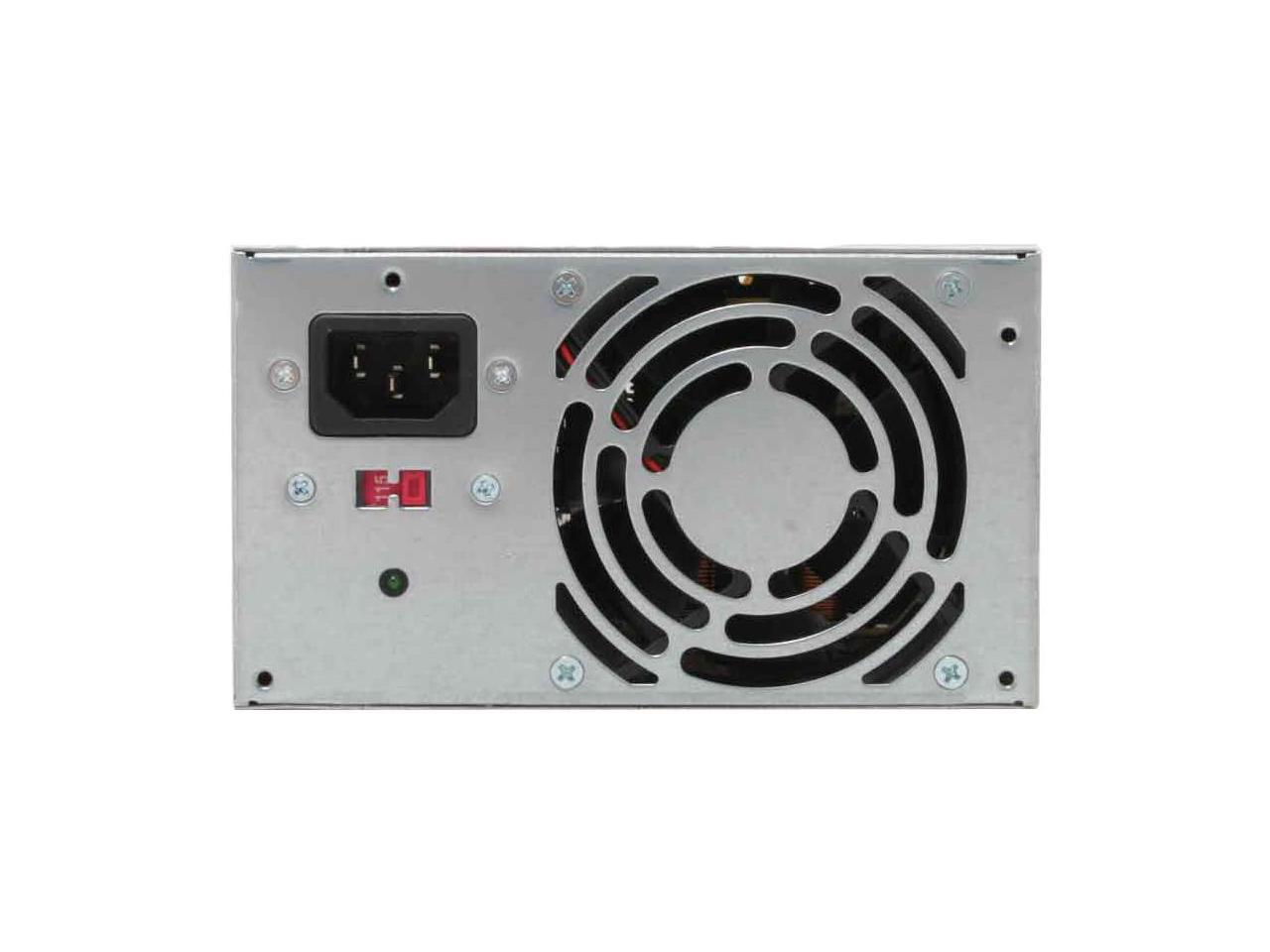 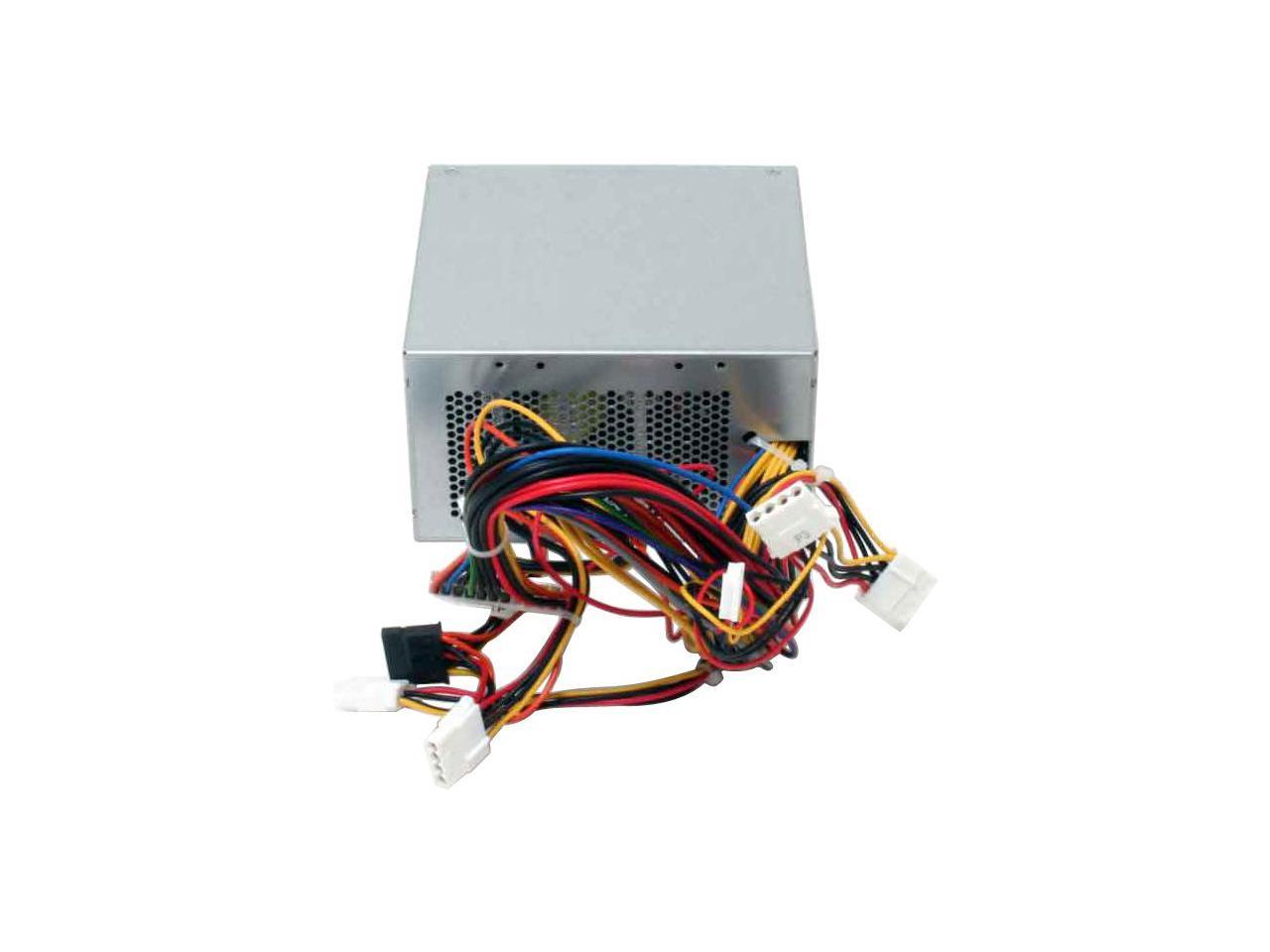 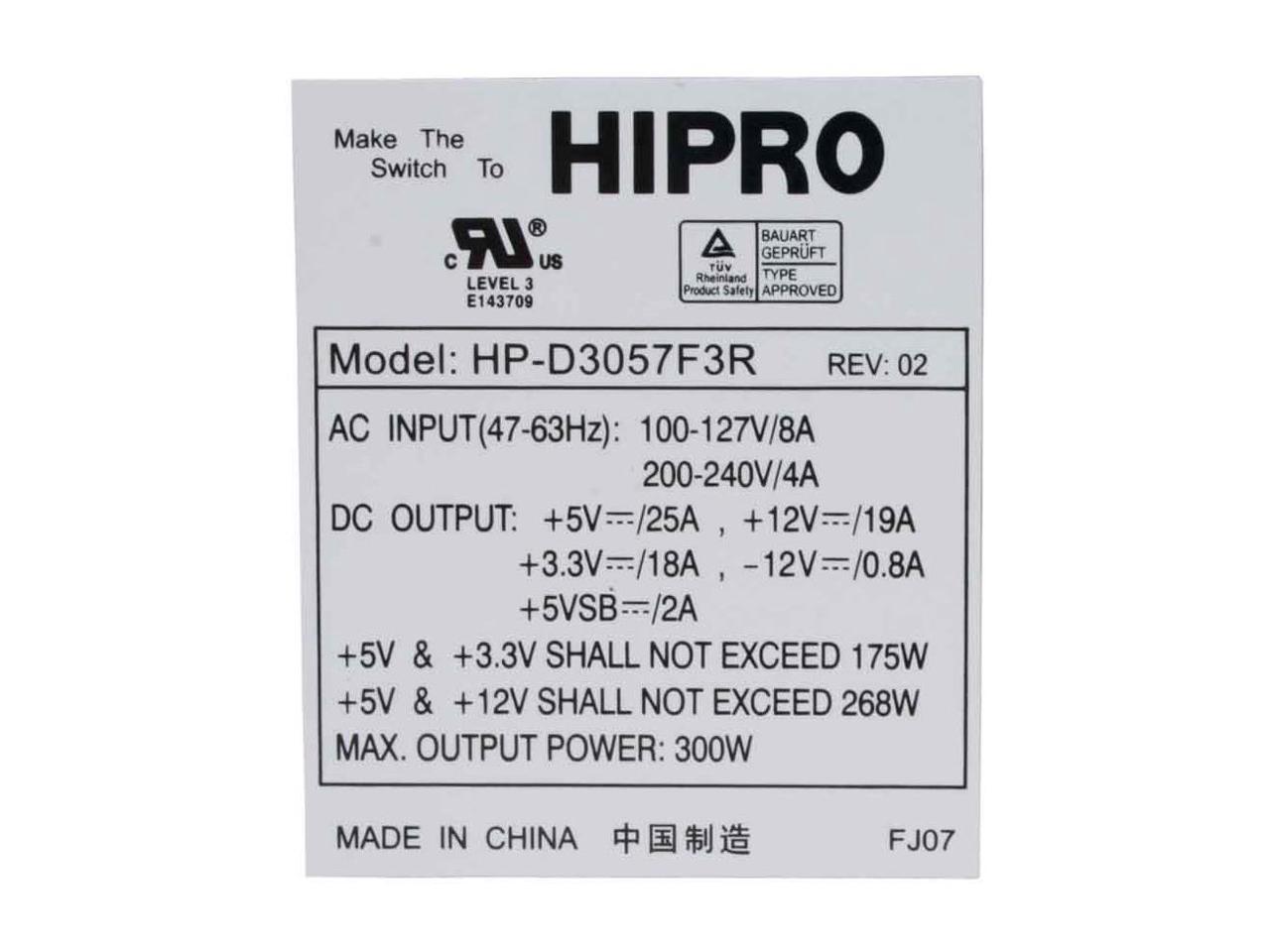 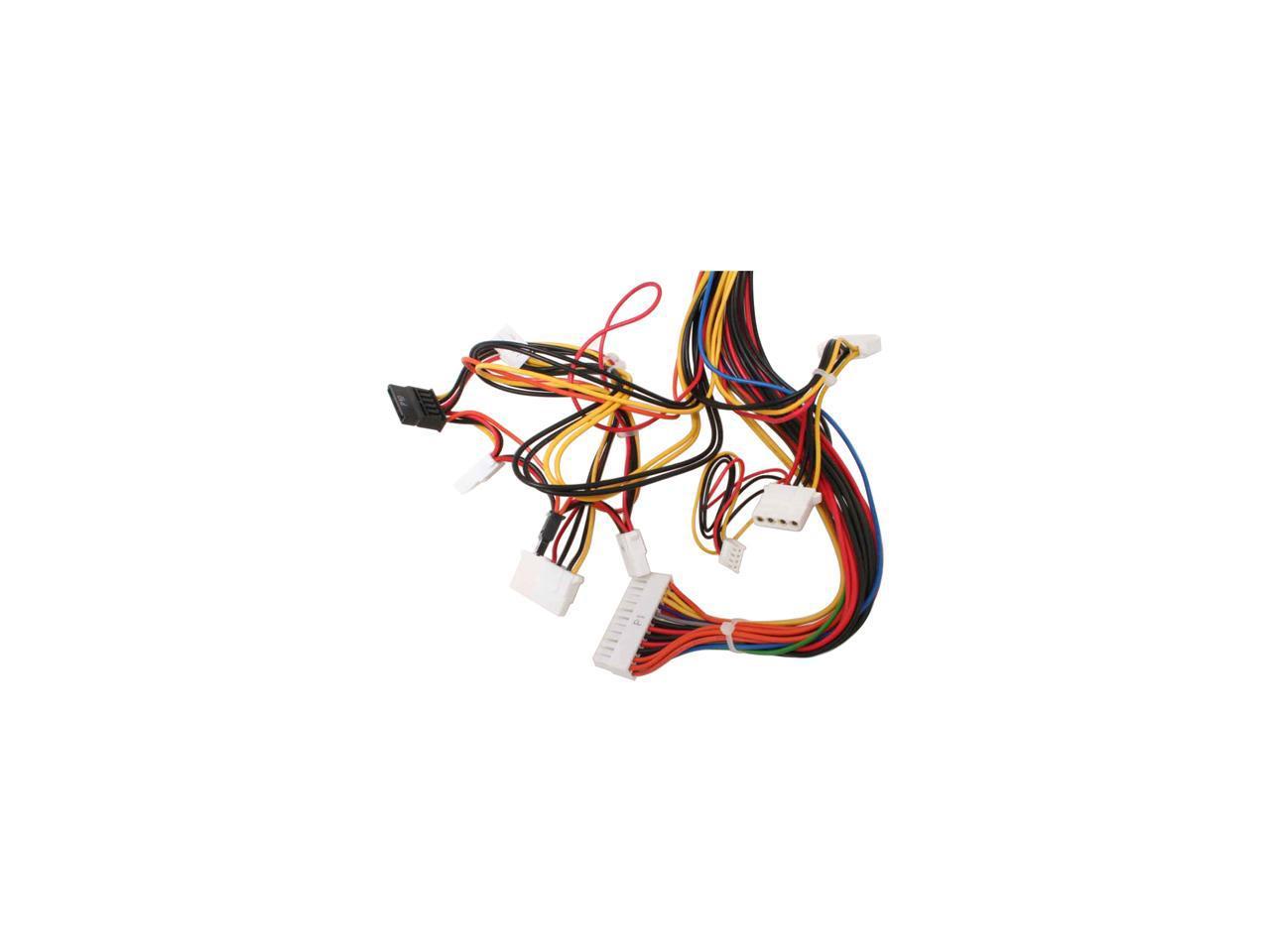 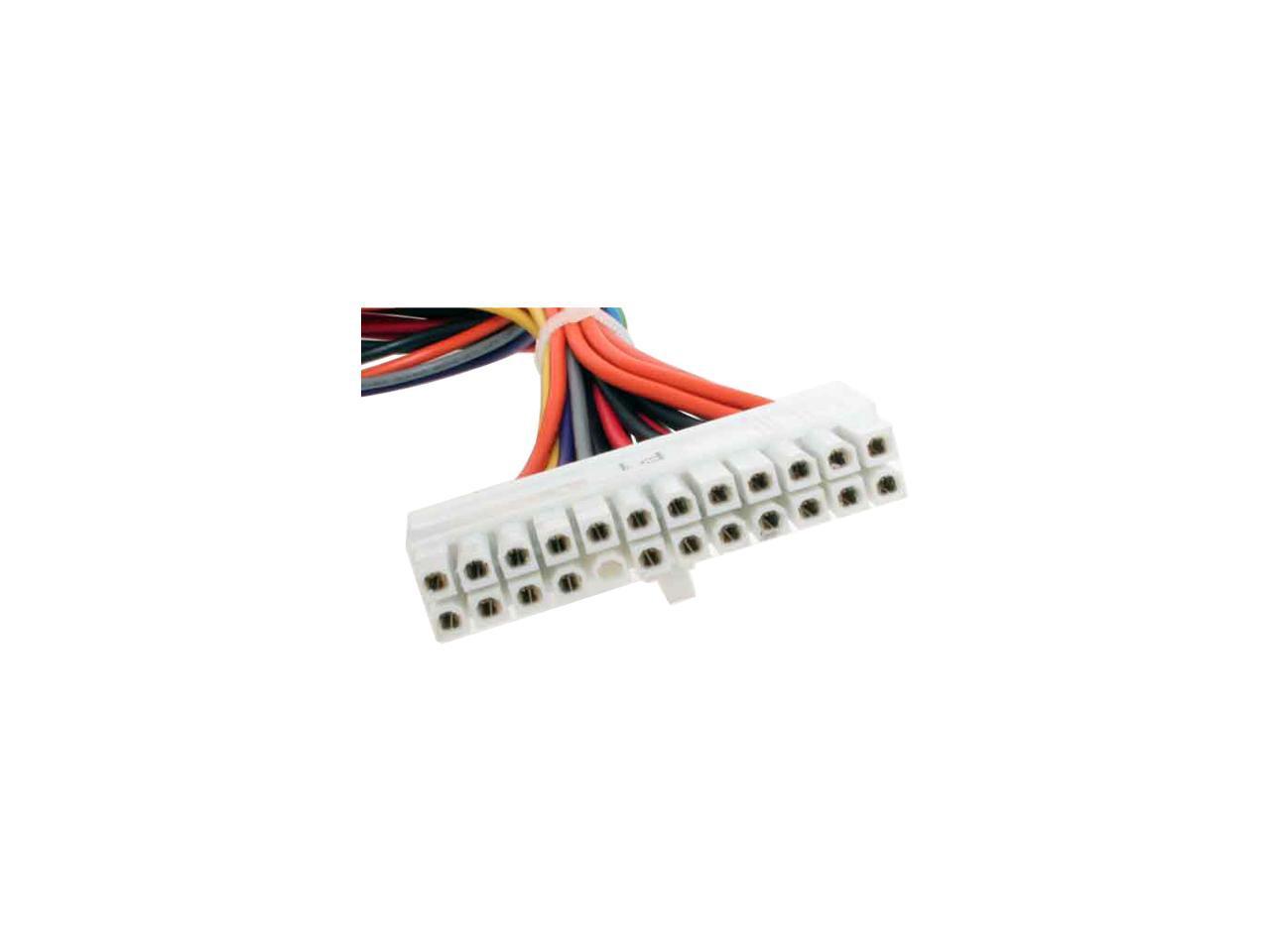 (54) Write a Review
OUT OF STOCK.
Specs
Reviews

Pros: Stable voltages, apparently regulates 5V rail independently, good for boards which depend on that rail. LED on back lets you know when the capacitors have discharged, so you don't start working in the machine while it still has power. Fan seems mild and quiet. I have some adjacent noise sources which keep me from noticing if it's loud or not. I don't hear it anyway. Relatively good capacitors (Teapo). PSU is heavy. Used by major OEMs, which is a good indication that it's reliable enough to withstand a major PC's warranty period. Some are critical of OEM power supplies based on their wattage ratings, but they are better built than most of the junk people buy at retail. If 300W is enough for you, then you can't go wrong with this unit.

Cons: Some things people need to know before buying: - Because it's an OEM design, the extra pins on the 24-pin connector are not detachable. If you have a 20-pin motherboard then you will probably need an adapter. Newegg sells these. Theoretically you can overlap the extra pins but there's almost always something in the way. Even with the price of an adapter this PSU is still a bargain. - There's no switch to cut off the standby power. You have to unplug it. - Newegg now is selling 350W HiPro models for not much more. I'd consider those next time.

Overall Review: This power supply appears to regulate the 5V rail independently, unlike many other PSU's. This makes it work better with boards like the Epox EP-8K7A which have a very biased dependence on the 5V rail. Some 8K7A's still sag the 5V a bit with this PSU, but not enough to cause instability. If you need more juice then I'd check the 350W model newegg is also selling. HiPro has more trustworthy wattage claims than many other brands. I opened my PSU recently and it has Teapo capacitors throughout. Teapos are good enough that they're unlikely to fail, even though there are better brands they could have used. Most power supplies have very cheap caps which will die before these Teapos do.

Pros: I do not know what DNN is talking about as my HiPro was 24 pin. Sure.. it does not come off like most do.. but you should have seen that in the pictures (another Pro) I sometimes have to cut the white plastic so the 4 wires and block seperate together. (sharp razor will do the trick) The small capacitor right next to the 20 pin connector on motherboard gets in the way. i kinda like this cheaper power supply. The heat spreaders on the inside look much thicker than some inside of the other cheaper models. It just seems more sturdy.

Overall Review: hopefully when the price of gas comes down.. so will newegg's noticeably higher shipping rates.

Cons: The name of the power supply indicates that is is an exact replacement for the power supply that died in my HP. I bought it, installed it and it didn't work. I looked at the amperage on the specs and the mother board and hard drive rails are significantly lower than the original part. If you have an HP Pavilion double check your amps first so you don't have to go through what I just did.

Overall Review: Probably a good power supply, just not for the computer it is supposed to be an exact replacement for.

Cons: not a top of the line model. basic power supply unit.

Pros: Fit a Horrid Dreaded D*LL Case, and works great, although fan speed is a little slow. I can’t believe how difficult big companies make it to replace a power supply... nothing would fit until I found this baby! Some people say this fits right in big company cases such as D*LL, G***WAY, ETC, but others are not so lucky... read cons.

Cons: It works good! I had to hacksaw carefully the 24 PIN power connection to make it a 20 pin because there was a capacitor in the way on the motherboard that required the power cable to be cut to 20 pin size.

Overall Review: Make sure you cut the correct end of the power cable to make it a 20 pin connector, I had an extra 20 pin power supply that wouldn't fit this case to compare it to so I was ok! Be Careful! and it'll work fine! +++My Dad Look at me like I was nuts taking a hacksaw to a new power supply...LOL...Its works thought, and fits NICE! TO AVOID THIS PROBLEM... My opinion is have a custom pc built, then you can use just about any PSU you wish!

Pros: Physically, this is one of few PSU models that can fit in older Compaq Deskpro PCs (and perhaps others), because it has the fan and the power cord connector in the right positions. Besides fitting the case perfectly, the main cable does NOT require modification for use on this motherboard (Deskpro EP series, with 440BX chipset). The extra four connectors just extend past the mobo jack and sit harmlessly in space. So, for this PC, no cutting is needed! For now, I'll call it a "pro" that the fan is incredibly quiet. But it *should* be quiet -- hardly ANY air comes out the back of it! The laziness of the PSU fan MIGHT be due to the presence of a very effective exhaust fan that Compaq put directly below the PSU area. MAYBE the PSU simply doesn't get hot enough. But another reviewer did mention excess heat, so who knows... Plenty of connectors, & plenty of length in the cables, for this or any typical PC case. The jacks fit just fine for me.

Cons: The power cord to the motherboard fits in my PC just fine without having to cut off any pins. But because that puts the plug off-center in the jack, the safety latches don't meet and can't connect. This is a really minor issue in my view. The connector grips the jack just fine by friction. So, just don't let any monkeys play with your cabling, and you should be fine. Of far more concern is the possibility, repeat possibility, that the fan in this unit does not work as it should. I can see it moving, so it's not dead -- but so far, it moves less air than a baby's sigh.

Overall Review: The Compaq Deskpro EP series, and probably others from Compaq and/or HP, are unusual in having a solid backplane with precut holes, rather than a big open area where the PSU sits. You can't put any old power supply in there, because Compaq has predetermined where the fan and cord MUST be. Also, since the PSU sits nearly flush against that backplane, I don't think there is enough clearance for a rocker power switch, which many units have below the power cord connector. Even other models from Hipro have such a switch, and as far as I know, that would not work in a case like this, even if you were willing to "hide" the switch permanently behind the backplane and forget about it. I may be crazy for upgrading this ancient PC, but for other crazies out there, this PSU is one of few that will give you the juice for more HDD storage, optical drives, extra fans, etc. The original was only 145 watts, so IF this model is rated correctly, it's a really big upgrade for a computer like mine.

Cons: I had to saw off 4 of the pins to connect to my old board- be careful. But it is still worth it.

Cons: had to dremel off the extra 4 pins on the mobo connector so it would fit my old motherboard.

Overall Review: shouldn't be a primary choice but rather a backup.