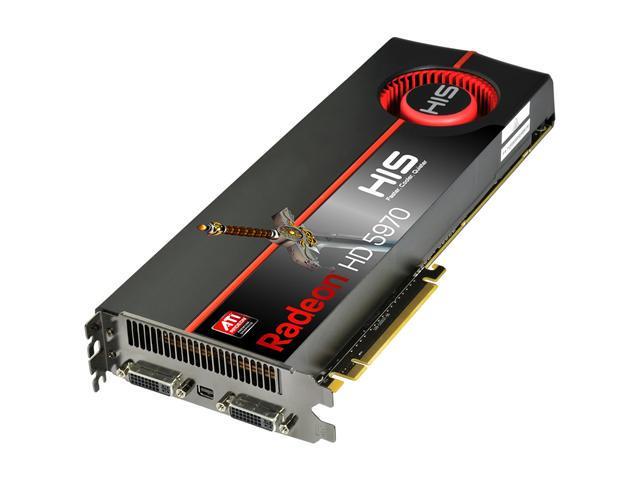 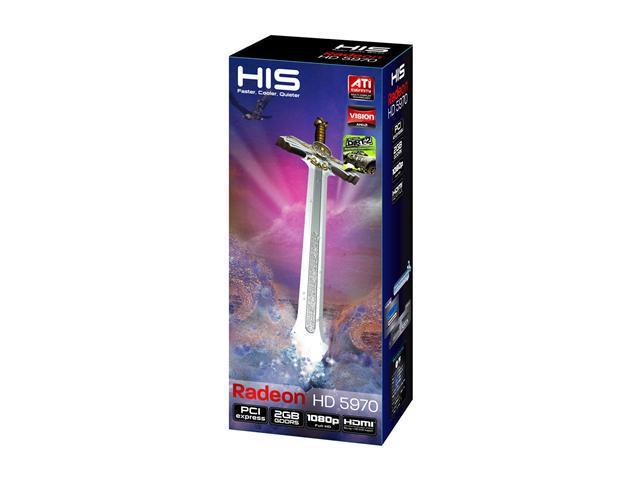 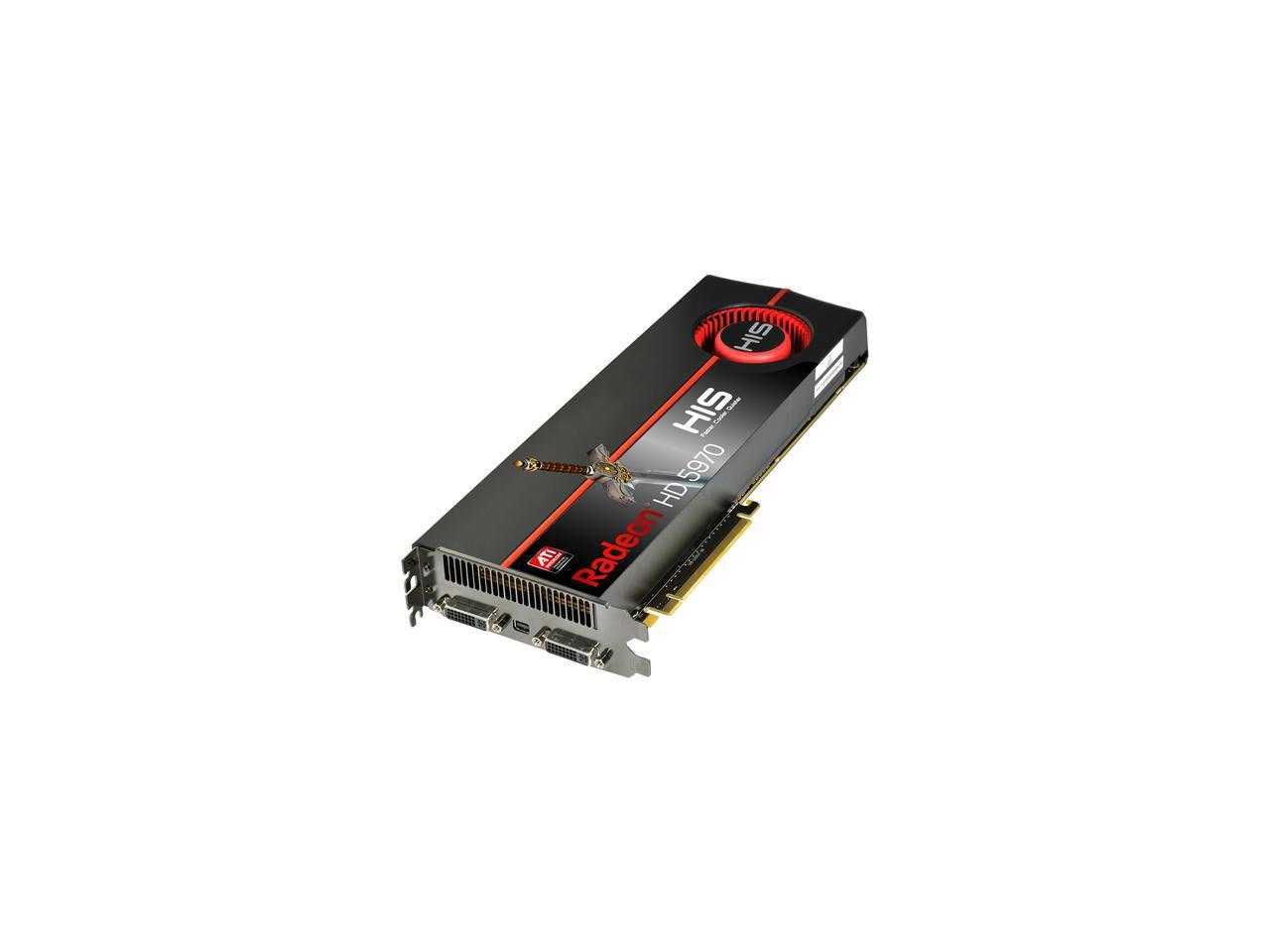 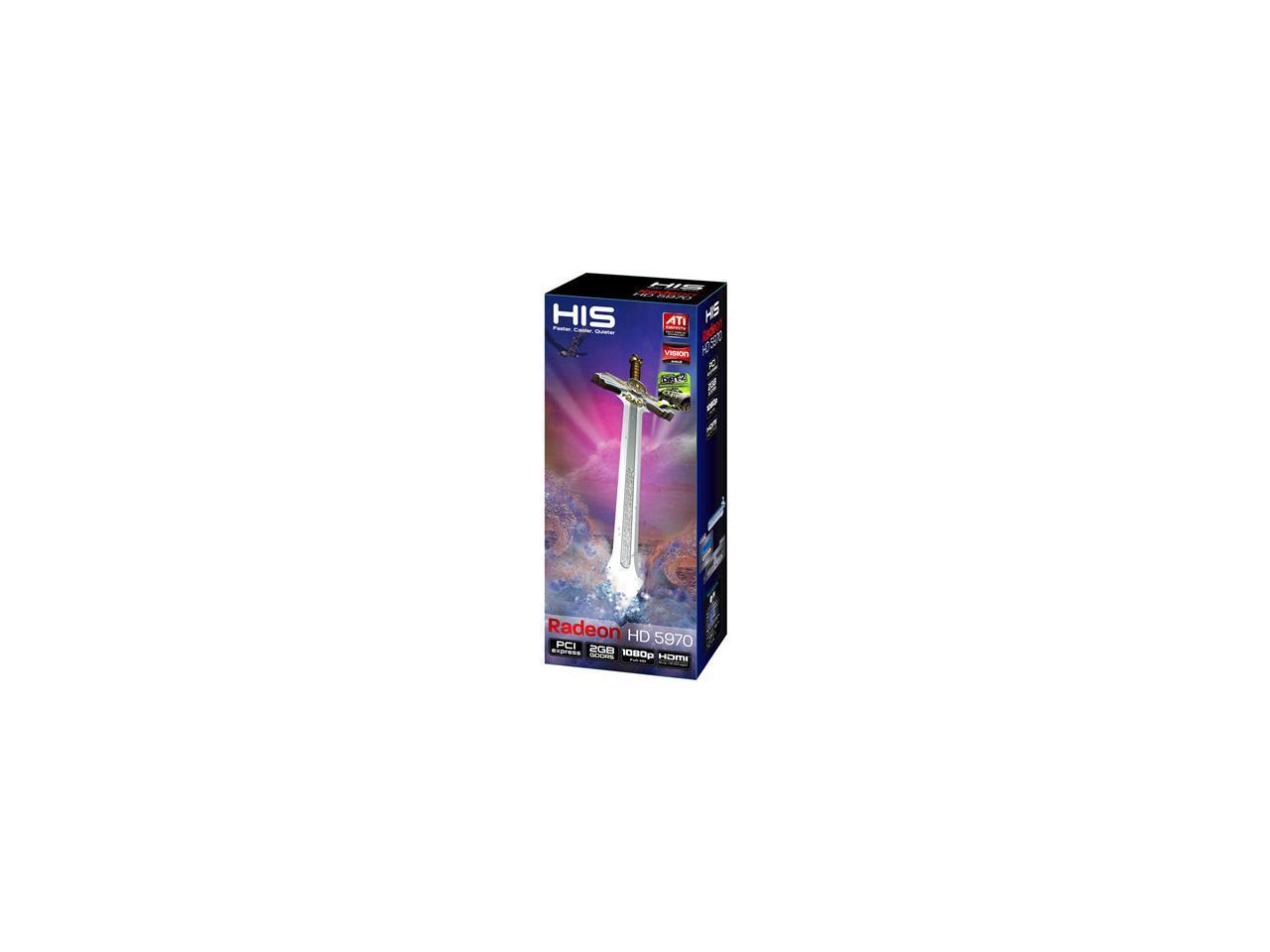 Pros: I came home around 2PM EST on Wednesday, turned on pc and checked egg and bought 2. I lucked out as they were all sold out 5min. after I purchased. Fast isn't the word. Runs my 30inch Samsung @ 2560x1600 extremely well.

Cons: Nothing. People say they are long but I like the bigger card. Who wants a little bug when a big 'ol Bentley looks so much nicer. Plus I have the new Corsair case with ample room and then some.

Pros: Upon opening the box, it was a beautiful card. Performed well in every game I threw at it, and did very well...for a few months anyway. Please see Cons.

Cons: If you're thinking of being an early adopter like me, and wanting a 5970, beware that there aren't many around...which means that if it fails, you have to RMA it, and will have to wait forever to get it back. First of all, HIS deals with a third-party distributor called "Lexy-Corp Pacific", and once you send the card to them, they wait until HIS in Hong Kong sends them a replacement to send to you. Naturally, Lexy-Corp gives you no status whatsoever, and tells you "Expect 2-4 weeks to get your replacement". Its been more than four weeks, and all they can tell me in broken english is "It takes 2-4 weeks. Be patient". But its BEEN more than 4 weeks, and all I get are representatives who can barely speak any english, telling me "2-4 weeks..2-4 weeks".

Overall Review: Avoid HIS if you can. Great card, but if it fails, you might as well just buy a new one from a more trusted source. I will personally never buy HIS again.

Pros: Upgraded from 2 4870s CF and can see a great improvement immediately. Heaven benchmark doubled in FPS at all DX10 settings, ~ 100fps, and only drops 2-3FPS with 8x/16x settings at 1920x1200. CF 4870s choked on > 4xAA. Highly recommended. (can't compare at DX11)HIS hardware seems good quality (need more time to tell.) Mod Warfare (1 and 2) are very soomth (>100fps always!) Haven't tested other demanding games yet (FC2, Crysis&warhead) Games like Fallout 3, ME, HL2 etc will not challenge this card in any way. Runs alot cooler and quieter than the x-fire 4870s.

Overall Review: Fits in a silverstone tj-09 straight away, but had to fiddle with board connections as the card is wider that a dx48bt2. Will overclock after a little "burn-in" time at stock settings. wil ladd another (and new power?) later. Get one - you'll love it!

Pros: When it works, it works great.

Cons: In the mail for RMA now. Also couldn't figure out what kind of HDMI cable goes with the mini displayport to HDMI. It's not like most HDMI cables, and unfortunately I learned this after buying the cable.

Overall Review: Just want to hook it up to the HDMI port in my TV when it returns in the mail. Need to know what kind of cable that is first, though.

Pros: Stellar performance. System benching just under 12,000 on 3DMark Vantage at "Extreme" preset. Plays just about everything great. Crysis, DAO, COD: everything just looks fantastic. Effective built-in heatsink. Quiet under low-load operation (ie - watching a dvd, etc), which is great. However, under high-load, temperatures will get hot and this beast will sound like a jet-engine.

Cons: Expensive, but good price/performance when compared to HD 5850 and HD 5870 cards. Very Long. In my HAF 932, this beast has about an inch of clearance between it and the hard drive rack. Make sure your case is large enough. Heavy. I noticed the back-end starting to sag in the PCI-slot, so I attached a zip-strip to it, and attached the other end to the top of the case, and then applied a little upward pressure (so to carry the weight of the back-end).

Overall Review: 3DMark Vantage Score of just under 12,000 on Extreme Presets with the following system: i5 - 750 Asus Maximus III Formula 4GB DDR3 1333 All speeds are stock.

Cons: I have certainly noticed a few more system hangs since installing the card (replacing 2 4870s). Lock ups occur at the desktop level - not during gaming or 3D rendering of comp chem results. Hoping improved drivers will address this sporadic 2D crashing.

Pros: Fast shipping from newegg, when the card works correctly, its screaming fast

Cons: I've had a ticket in with HIS since 4/1/10, with the grey bar/3d lockup issue that nearly every 5970 owner has had. First response took 15 days to hear back, then 5, then over a month. They have a bios fix for the card, but not a flasher for windows 7, yet they didnt give the bins so I could flash, so still im stuck w/o a very functional card.

Overall Review: HIS Tech's customer support, is simply the WORST I've ever EVER had the pleasure of dealing with. We're up to over 2 months now in the ticket system, and now they're saying RMA? Ya.. I guess they dont read or refuse to view the outside world as its a 5970 problem many, many are having, and the bios they have will fix it, yet I'm sure it will be another few weeks of waiting to get some other 1/2 baked response w/o a solution. Would be nice if HIS responded to their tickets / RMA's as fast as they do to reviews on newegg, which I'm sure this will have a copy/paste response below it soon enough from HIS, which will do about as good as banging your head against a wall over and over. But hey on the bright side, 3 screens makes a mean excel spreadsheet, since its about all I can run on this card w/o 3d crashes.

Manufacturer Response:
Dear Anonymous, Thank you for support in HIS. We do apologise for keeping you waiting so long. We had evaluated your case. And our technician had updated you the latest status for your ticket in our Kingdom of Gamer website. For detailed information, please kindly refer to the KoG website. HIS Kingdom of Gamer http://www.hisdigital.com/member Please feel free to contact us if you have further questions. Again, we apologize for any inconvenience caused. Warm Regards, HIS Marketing
Justin N.
Ownership: 1 day to 1 week
Verified Owner
You get what you pay for1/4/2010 5:41:07 PM

Pros: This card performs exactly how you would imagine 4.3billion transistors performing. Unless you've got a 1080P tv and make a habbit out of maxing out all settings, you're going to have a difficult time taxing this card. The throttling function on this card works remarkably well. When entering a game my frames were far lower than they should have been (30), after 10 seconds they shot up to 250+, this is an excellent sign that the card is throttling as it should, and not just throttling up at any short data spike thrown at it.

Cons: The card is 12.25 inches long, this is only a con if you have a smaller case, and thus I wouldn't subtract points when someone who is in the market for a card this expensive should have that aspect taken care of anyway.

Overall Review: DO NOT under any circumstances attempt to install this card when your PC is standing vertically. There are numerous videos on YouTube of people installing it this way and it is a very callow method of installation that does often lead to a broken card. Additionally, you should have all wires and components moved out of the way before trying to install this card, otherwise you'll end up trying to move wires with one hand, and holding the card with the other and could possibly drop the card or bang it against another component.