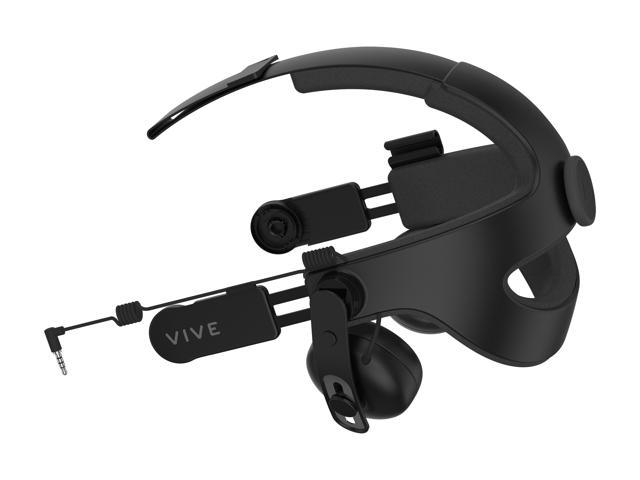 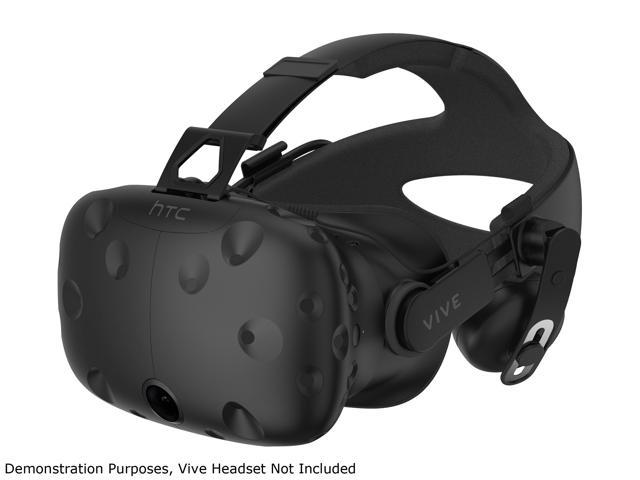 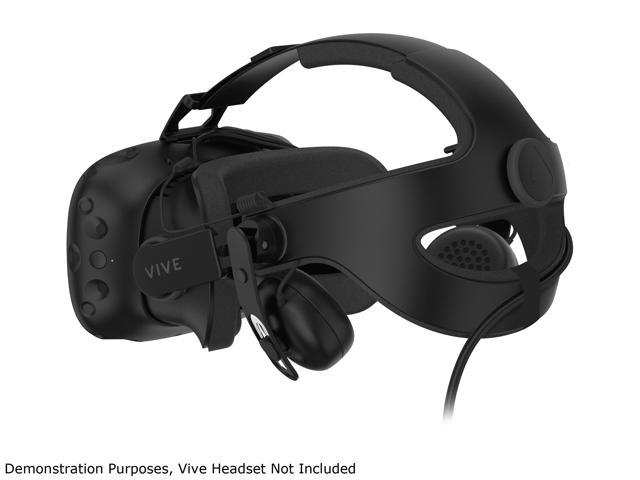 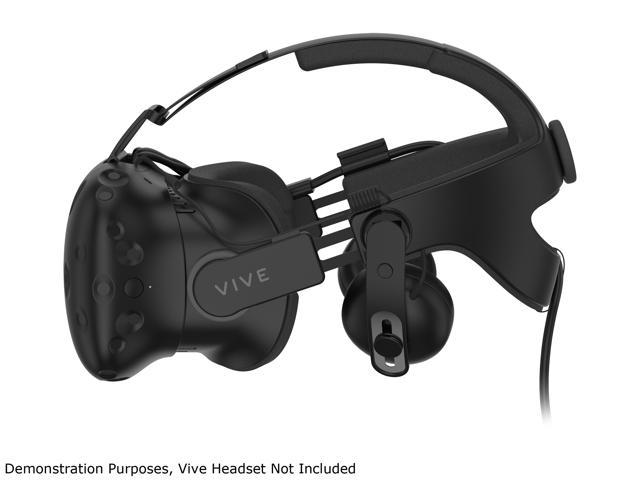 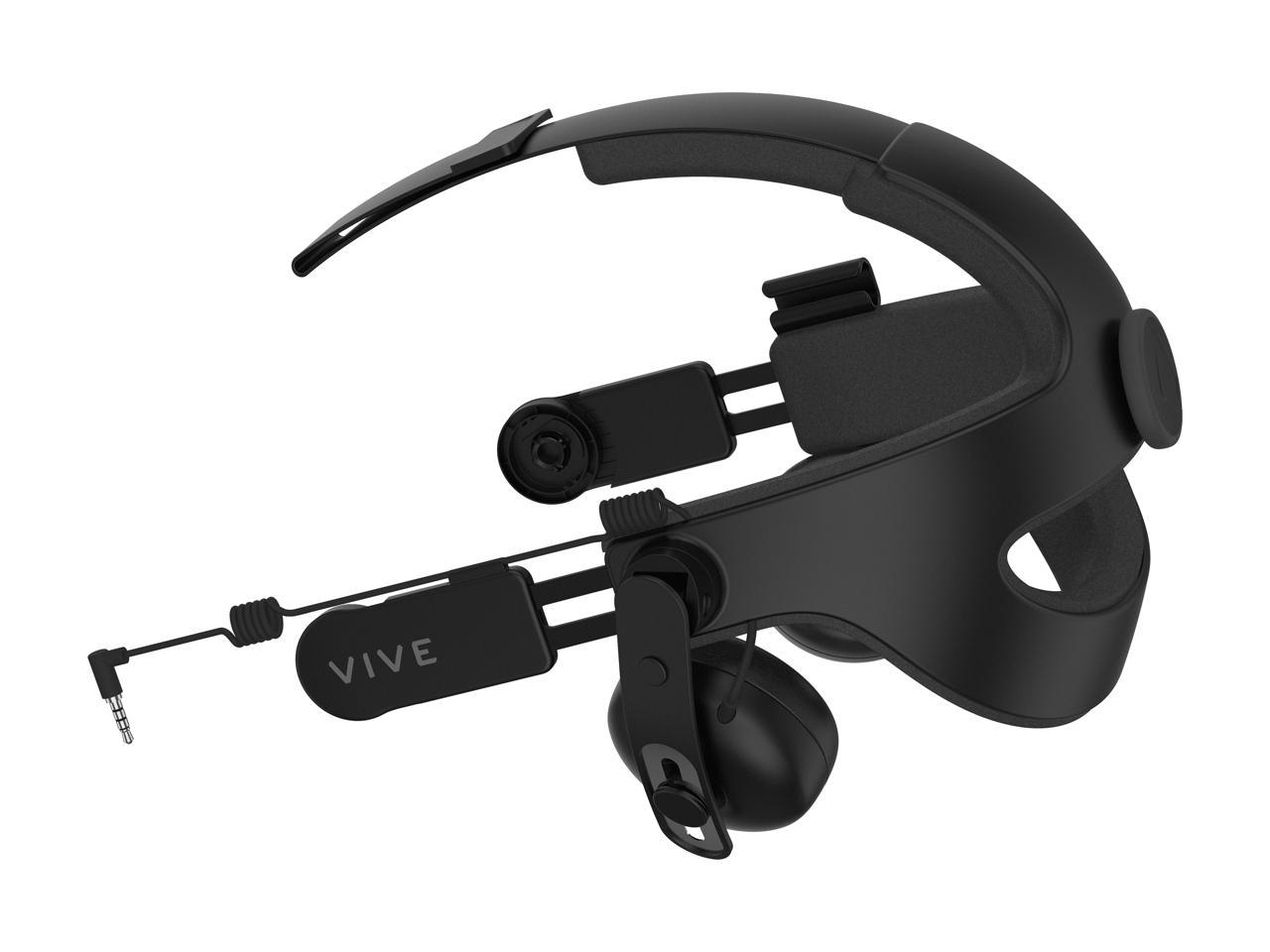 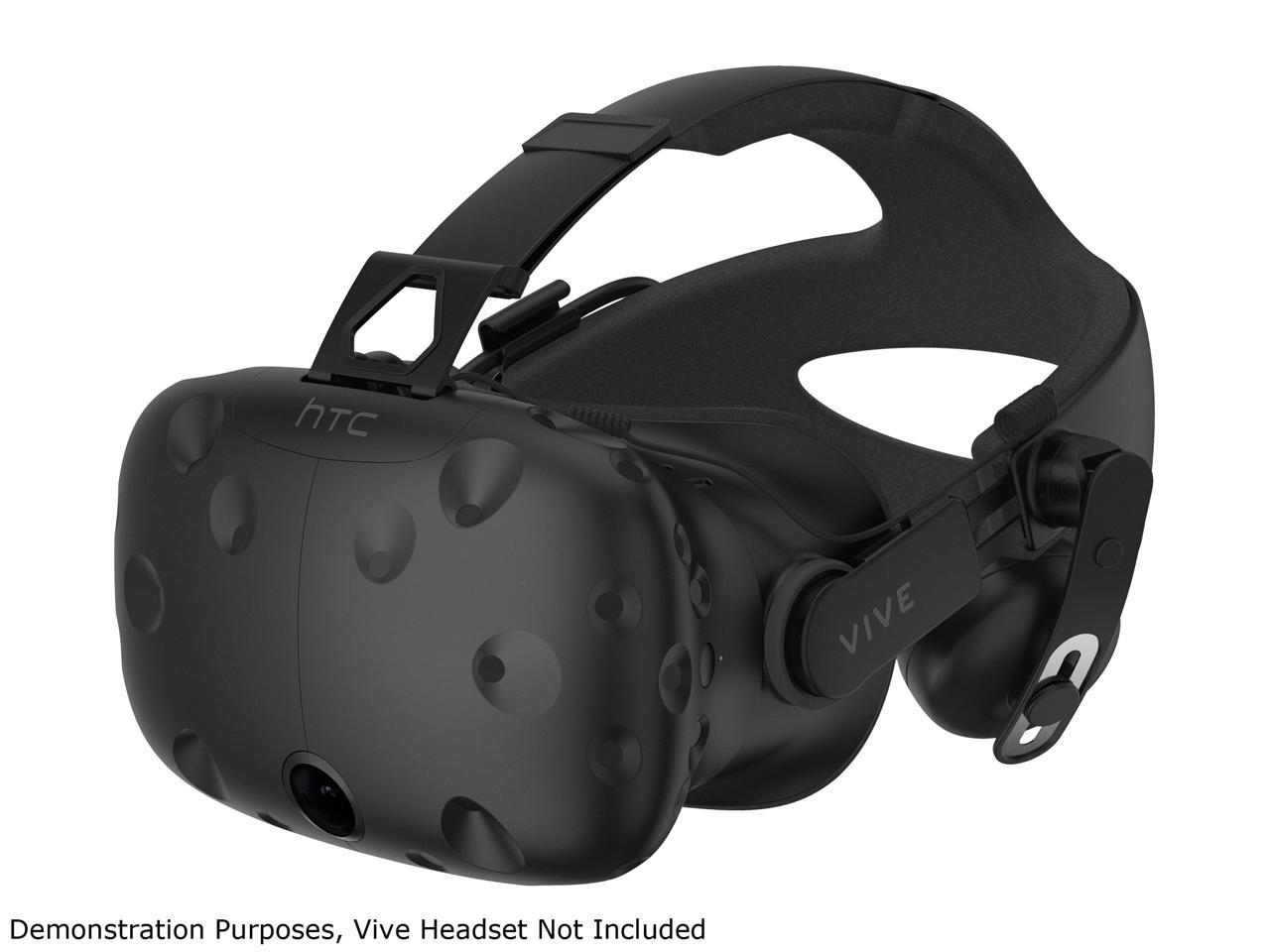 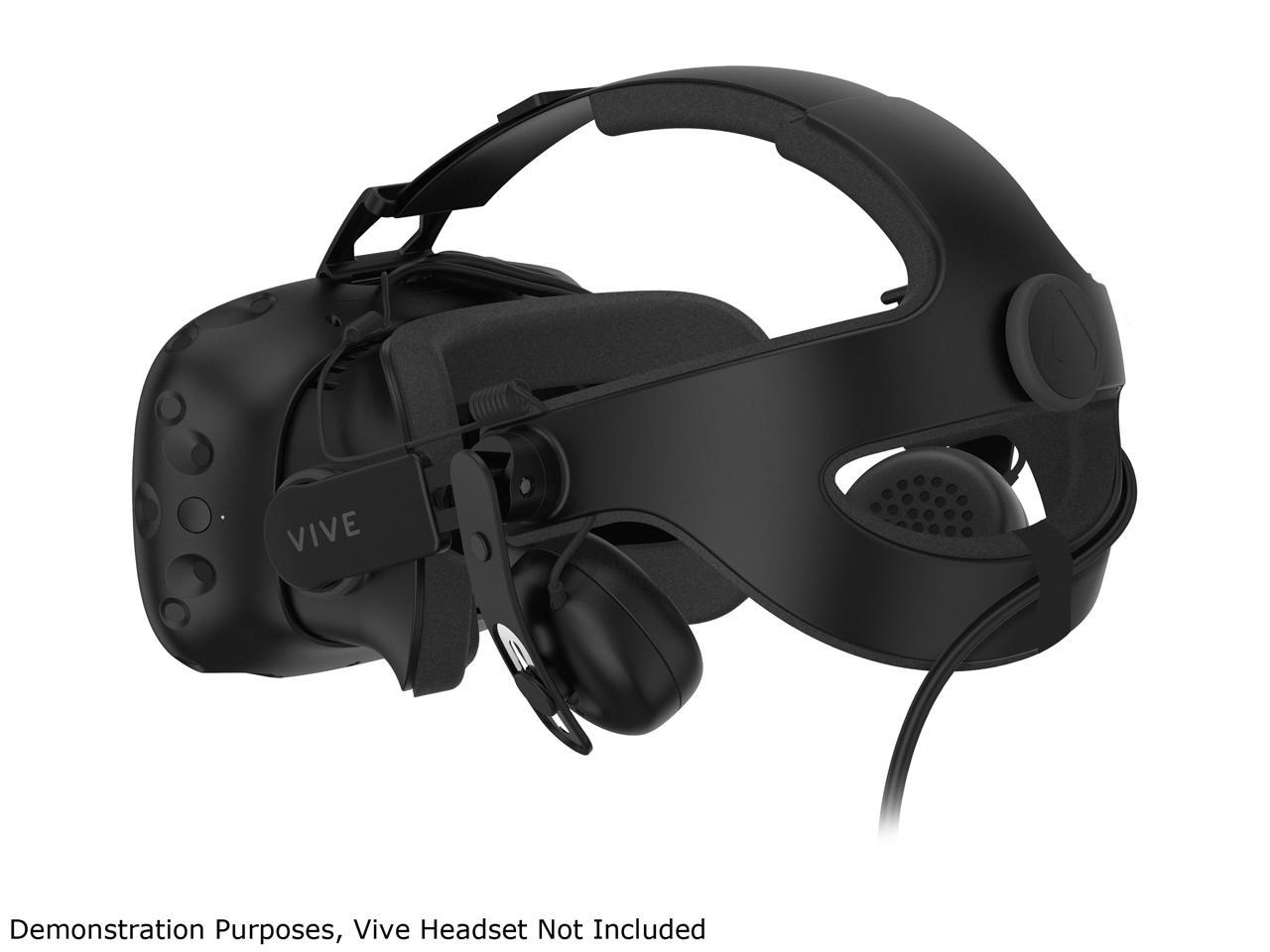 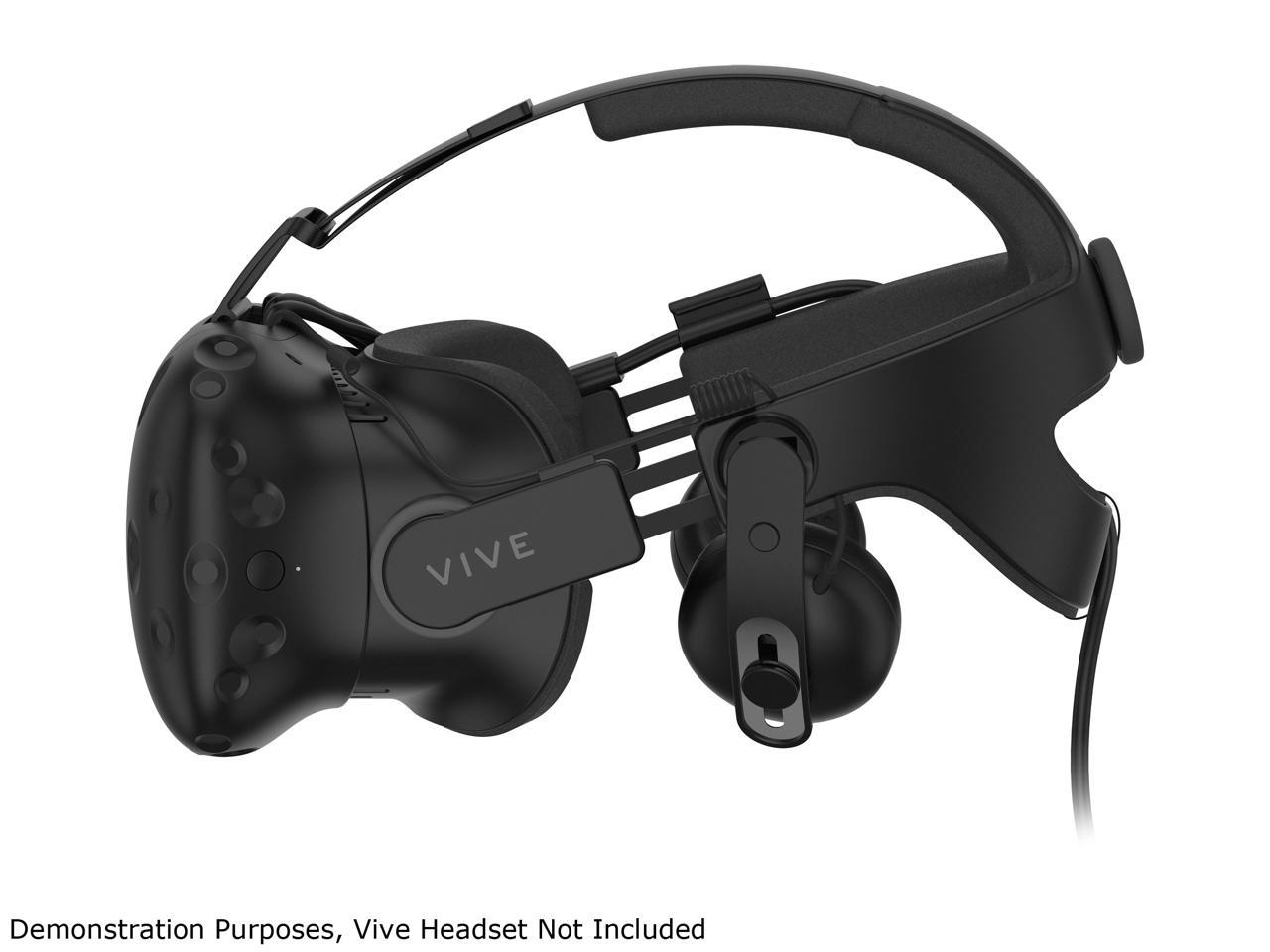 Even distribution of the headset achieves an optimal center of gravity-creating comfort in VR that is unlike any other. Precision tracking provides 360-degree coverage of your movements to the millimeter-floor to ceiling. Use VIVE seated, standing or in a space up to 20x20, with supporting base stations. Pros: it completely evens out the weight of the headset, its super comfortable, it feels super secure on your head, and the headphones give enough audio, but still lets you hear your outside surroundings(and the bonus is since the price of the Vive was reduced, this will make a good investment to your headset)

Cons: the instructions and installation was a little bit difficult to understand, but other than that, there are no other cons to this

Pros: -Spreads the weight of the headset perfectly over your head. -Ease of taking off and on -Ease of adjusting to different sized heads (1 top center velcro strap and 1 nob at back of strap) -Multi-Positional headphones Included (sound is decent but the adjustable nature of the setup is sweet)

Cons: -I did not come with HTC Vive

Pros: Comfortable, easy to use, and does a great job, should have been standard with the unit.

Cons: Weak ear piece brackets. mine stopped clicking into place after about 1 week of use. I need to add some duck tape to all the rotation of the ear pieces to stay in place.

Overall Review: Improvement over the original head mount Could be better quality on the ear piece mounts.

Pros: It's much better than original strap, it's better than I expected. You definitely need this if you plan on playing for an extended period of time.

Cons: The speakers are well designed for ease of use but they don't sound really good. I recommend buying a good wireless headset to maximize immersion.

Pros: Assesses the various shortcomings of the original head strap.Truly feels like a (half) successor to the Vive.

Overall Review: The Deluxe Audio strap, though non-essential, is a welcome upgrade to the HTC Vive and a must-have for regular/die-hard Vive users.

Overall Review: ok, wow, I was fortunate to be able to order this in time. I was at my local mall, wasn't feeling it, decided to go home, checked twitter on my phone saw that this was now available. I quickly got on my pc and saw Newegg sent me notification, ordered and bam, got it next day. woot. yes this works great for what it is, no more headphones thank goodness........... now just waiting on the TPCast....

Pros: I am glad I bought this for my VIve. It's been a year and a half, and a new accessory did not seem extravagant. This brings ease and comfort to wearing the Vive that it did not previously have. Anyone can slip it right on, it's great. That is its biggest selling point: comfort

Cons: But that comfort comes at a price. This is something that should have been included in the original kit, IMO, but I am also glad to see HTC putting out more accessories for it. Most will turn away from this purchase simply because it is asking for more money when it already costs far beyond the reach of average gamers. The built-in headphones are a nice, Oculus-like touch (get it?) but like those, they are not exactly audiophile grade. You can, however, remove the built-in mics and use your own headset, or at least most, so it isn't too big of a con. It's the price that loses one star, becauese everything else was great

Overall Review: I recommend this for any Vive user. The only con is the price, but if you are a Vive user you know just how tough it is to get the headset on. It's a clunky system, and what I expected at such an early developmental stage. Look at what taking another year did for Oculus Touch. Now, I would not look at it like we are being cheated, but instead lucky enough that they are producing upgrades instead of scrapping the project and moving on. This brings ultimate comfort for all Vive users and is a must-have item. Taking the headset on and off, or switching it to somebody else, is extremely easy. This fits securely on your head quicker than any other VR headset I have tried. If you have the money, and want another reason to use your Vive more often, go ahead and get this! !

Pros: -It does fit and feel a little bit better. And it does take some of the weight off the cheeks. -The audio actually sounds pretty good all things considered.

Cons: -The price. $100 is a lot. The vive is expensive, the games are expensive, and now this. -The rear foam pad could be thicker, maybe made of memory foam so it conforms to the head better. -Though it takes weight off the cheeks, it puts more on the brow-line. The Vive is just havoc on people's sinuses. -The strap used to hold the cable in the back, seems like more of an after-thought. It's not ideal, though i use the original cable.

Overall Review: They should have released a second rear-foam pad that's just a bit thicker. There is no reason they couldn't have released a deluxe head strap for $30 that didn't have the built in headphones. I personally prefer earbuds. So i would have preferred if they released the strap for 1/3 the price, without the headphones. The headphones are removable though. But since they do sound alright, they are fine for use. Plus you can let other's use the vive without them messing up your earbuds. The box contains the headstrap, 2 little multi-language booklets, the cable tie(velcro strap), and 2 extra headphone screws.

7 out of 9 people found this review helpful. Did you?