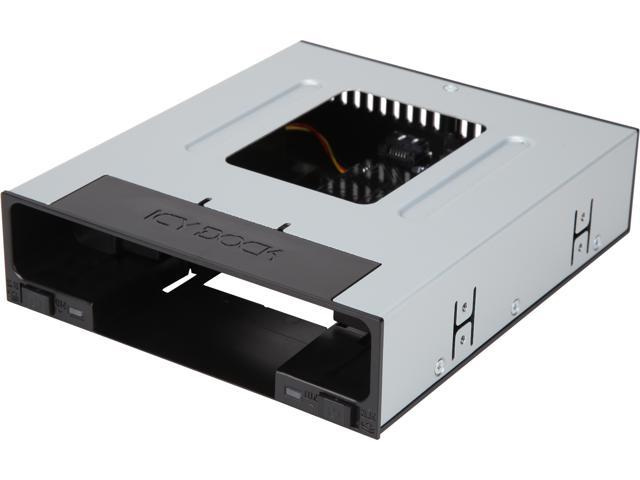 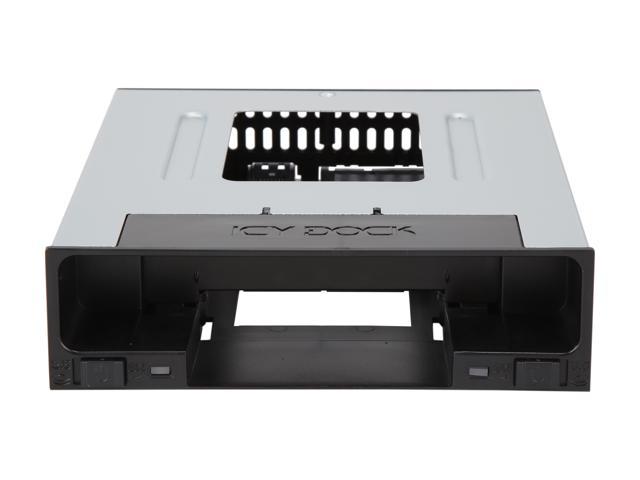 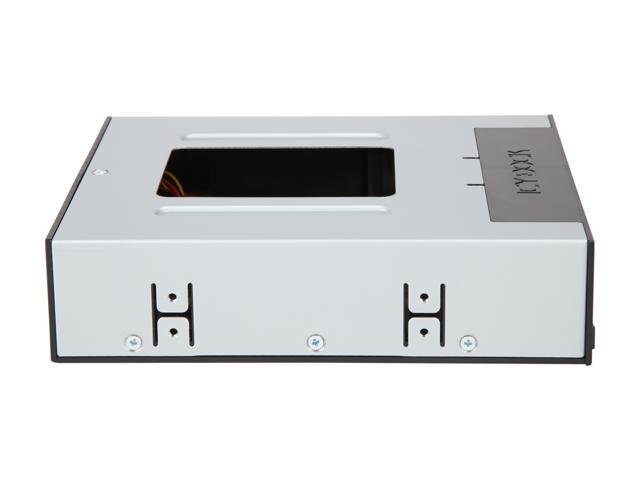 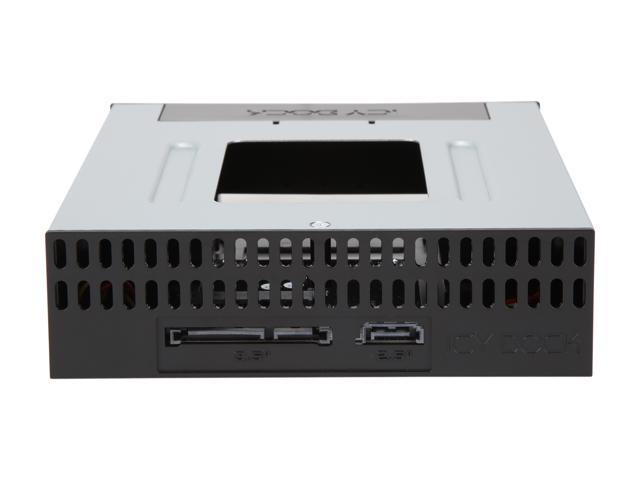 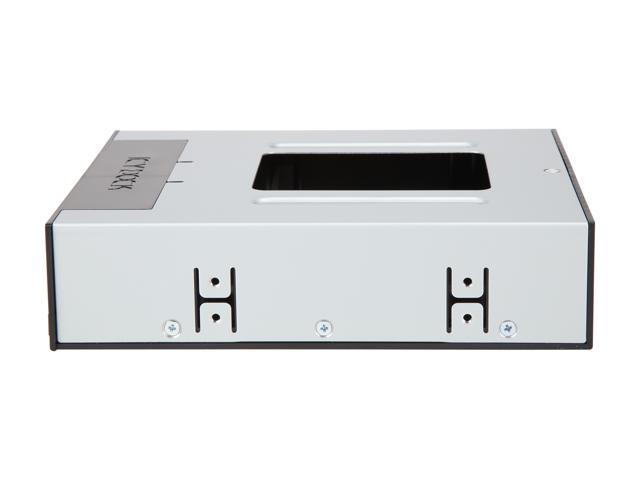 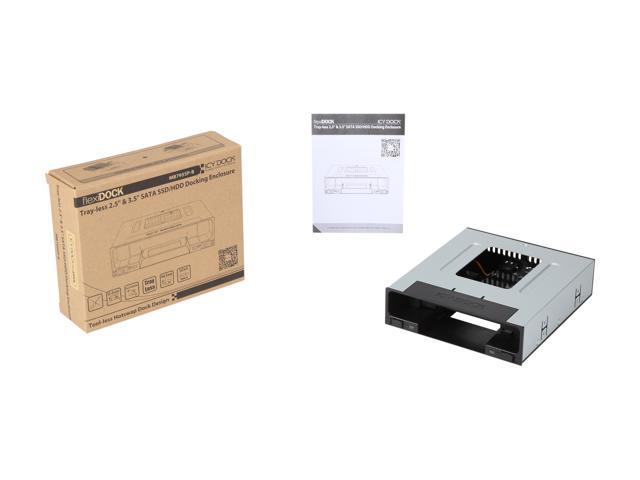 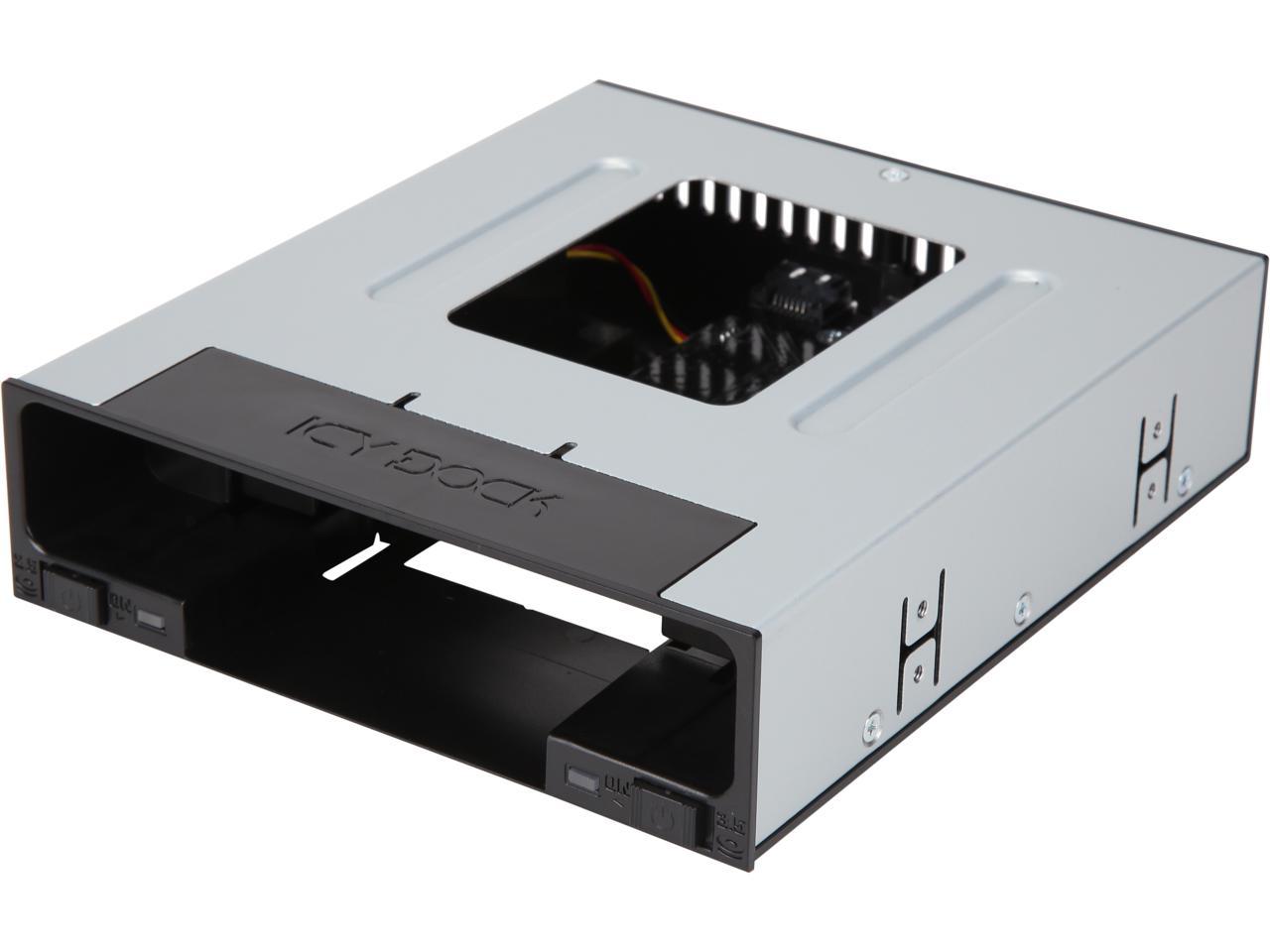 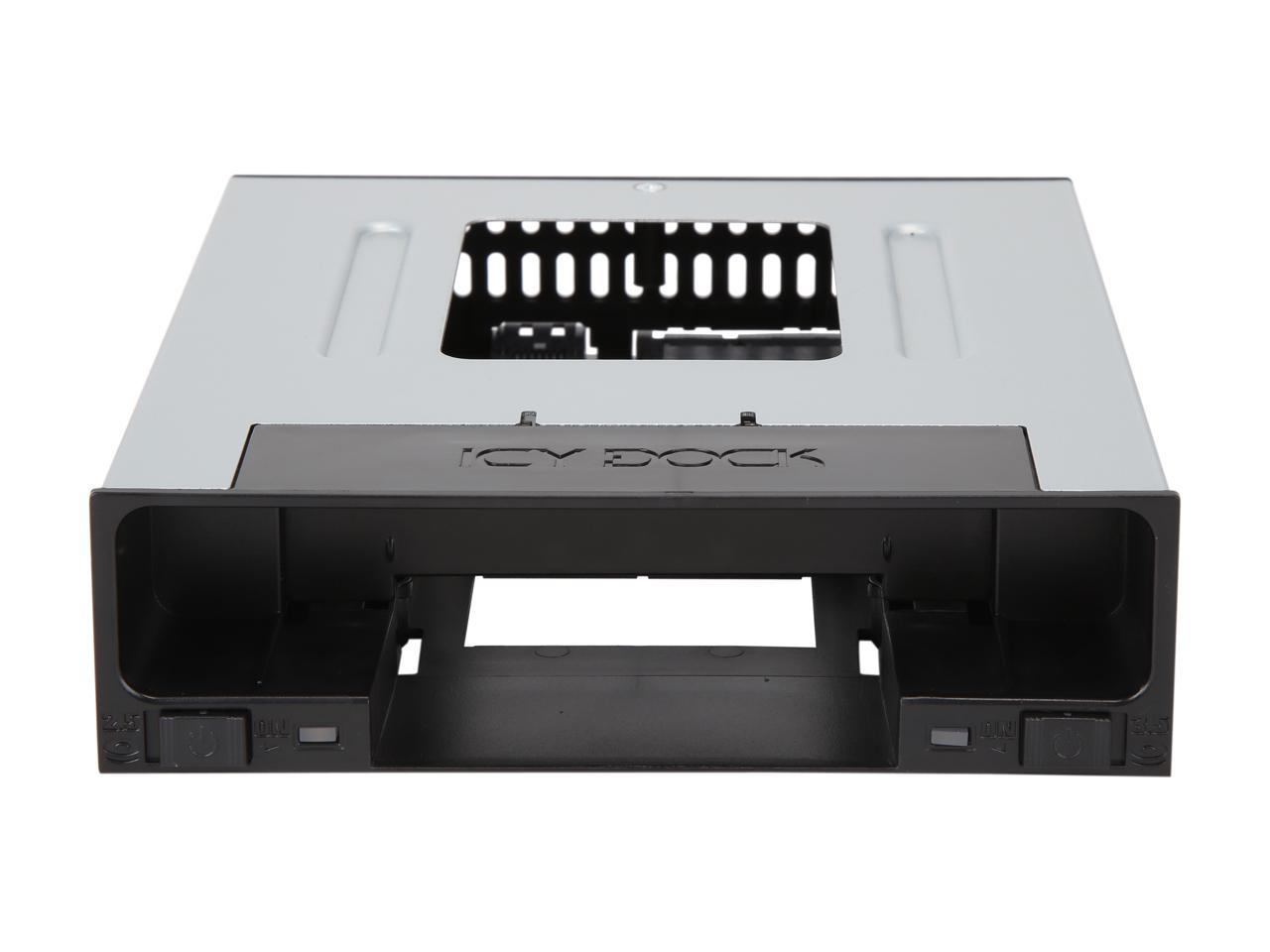 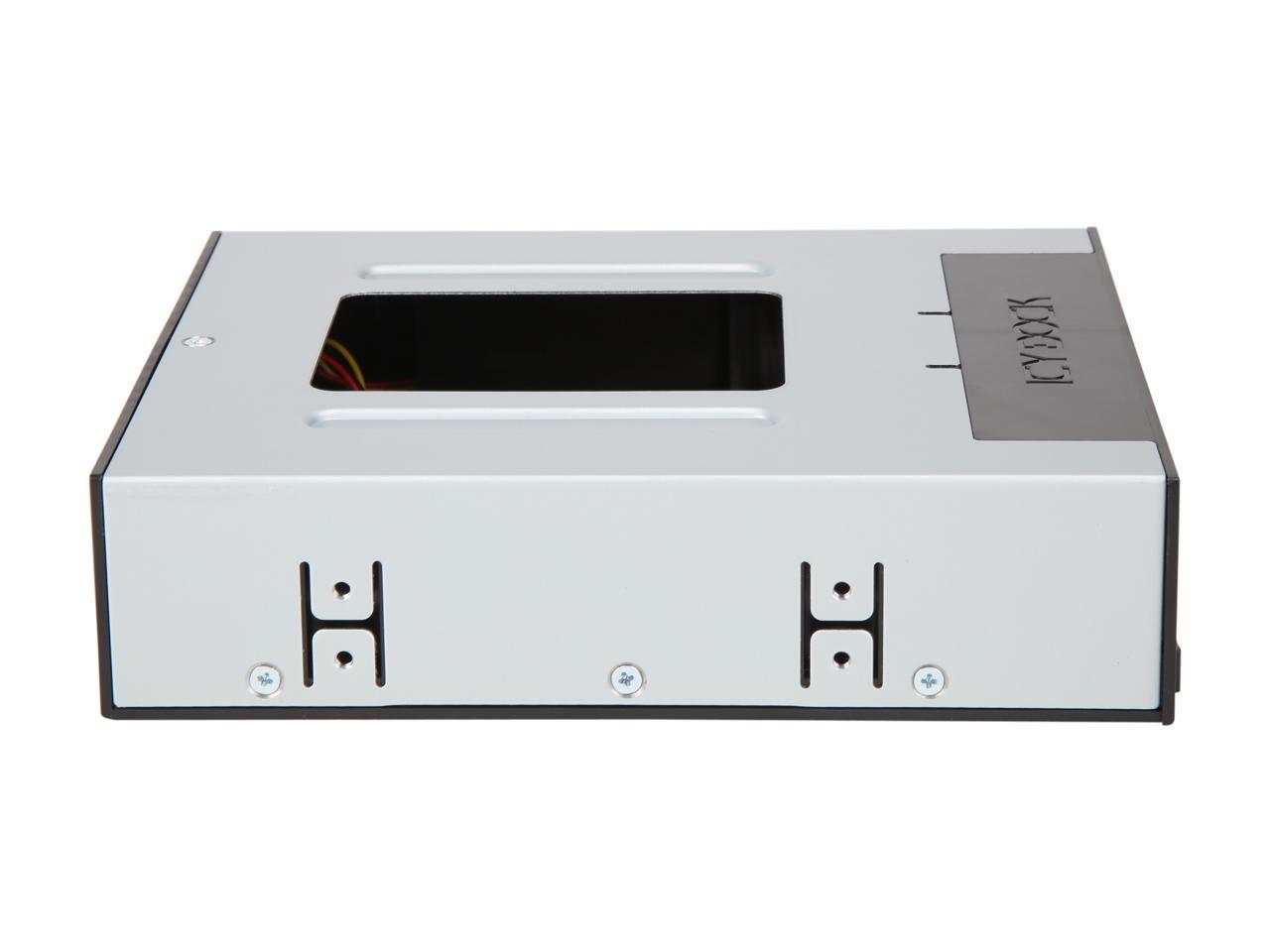 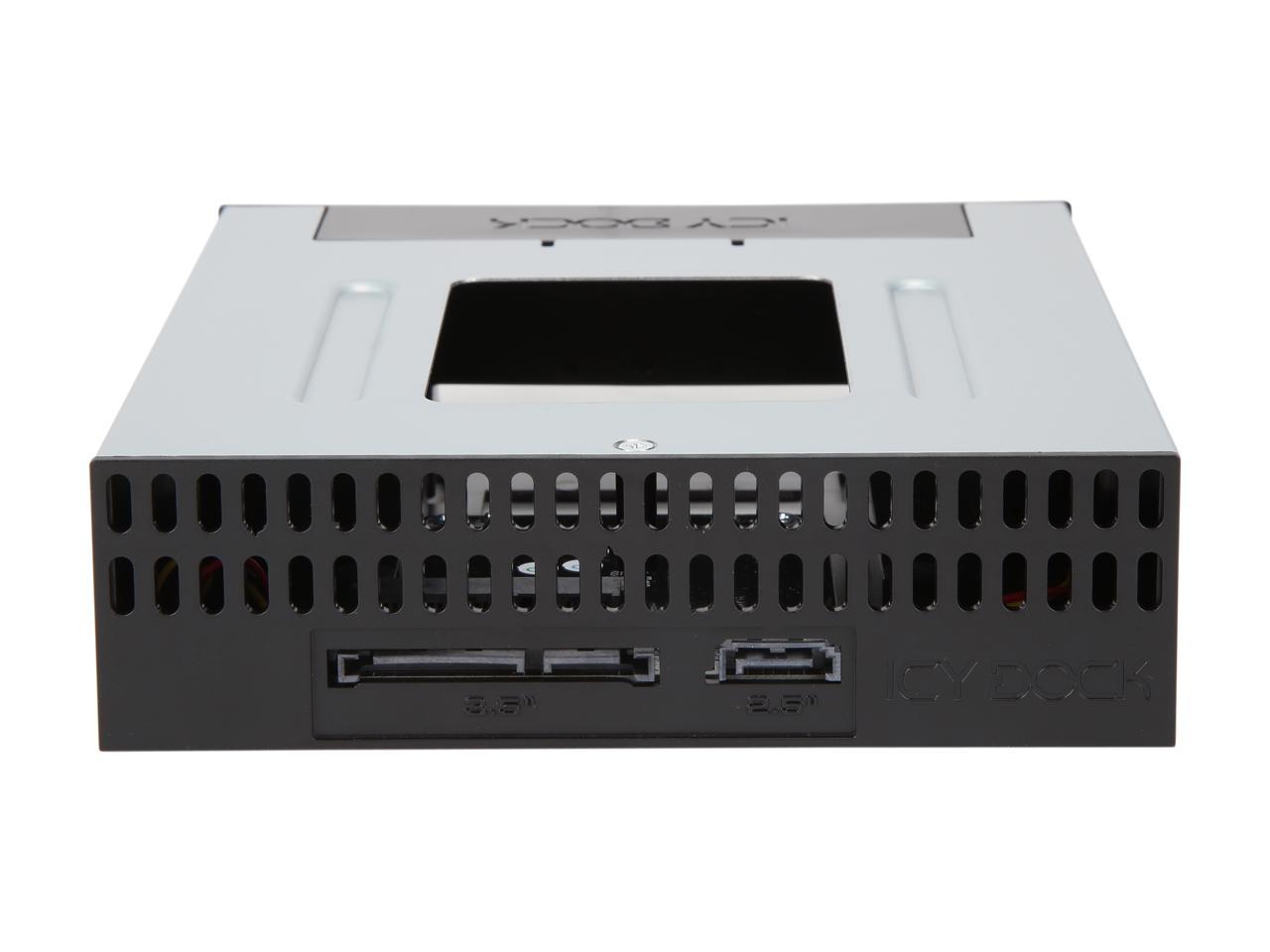 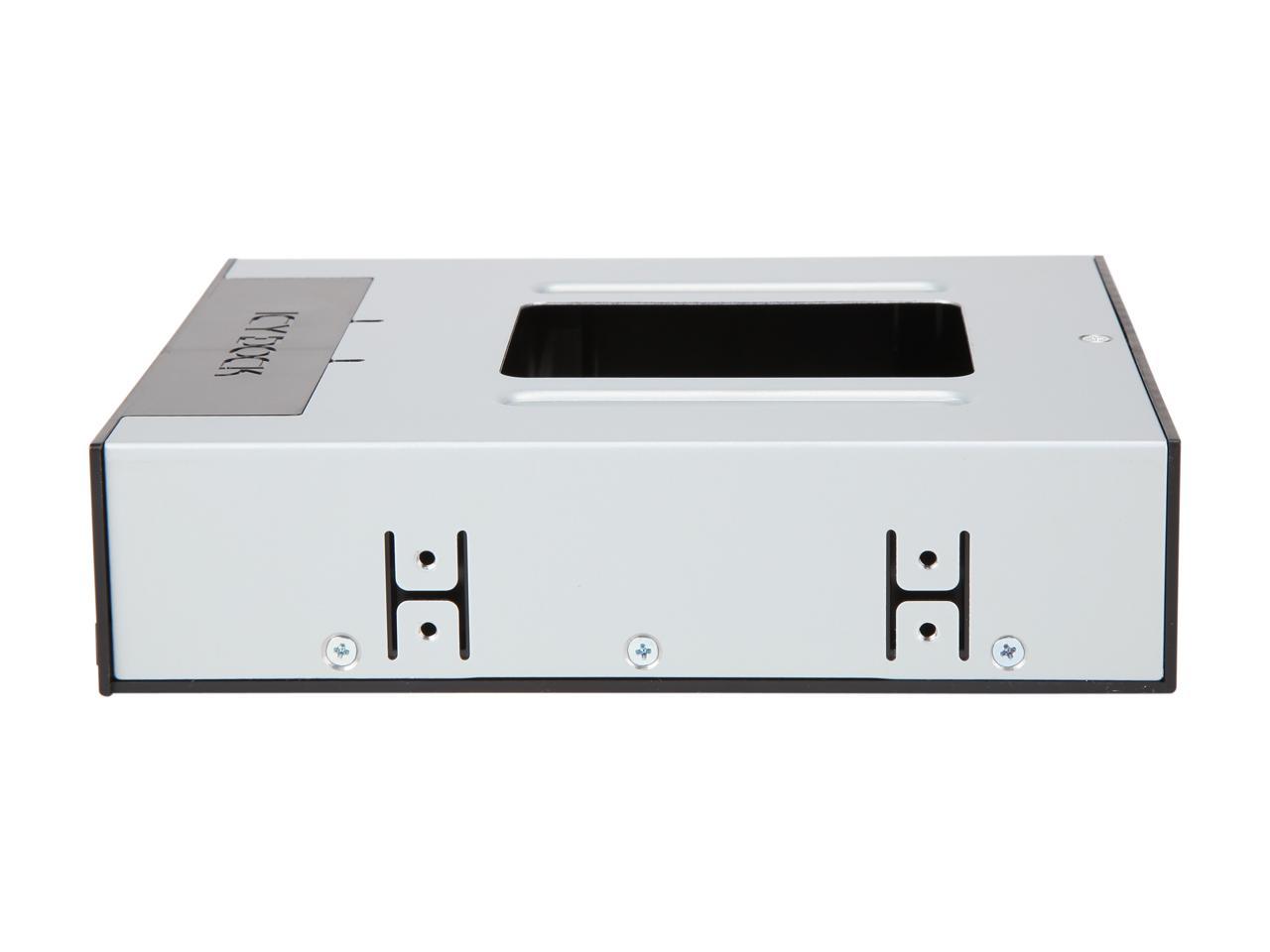 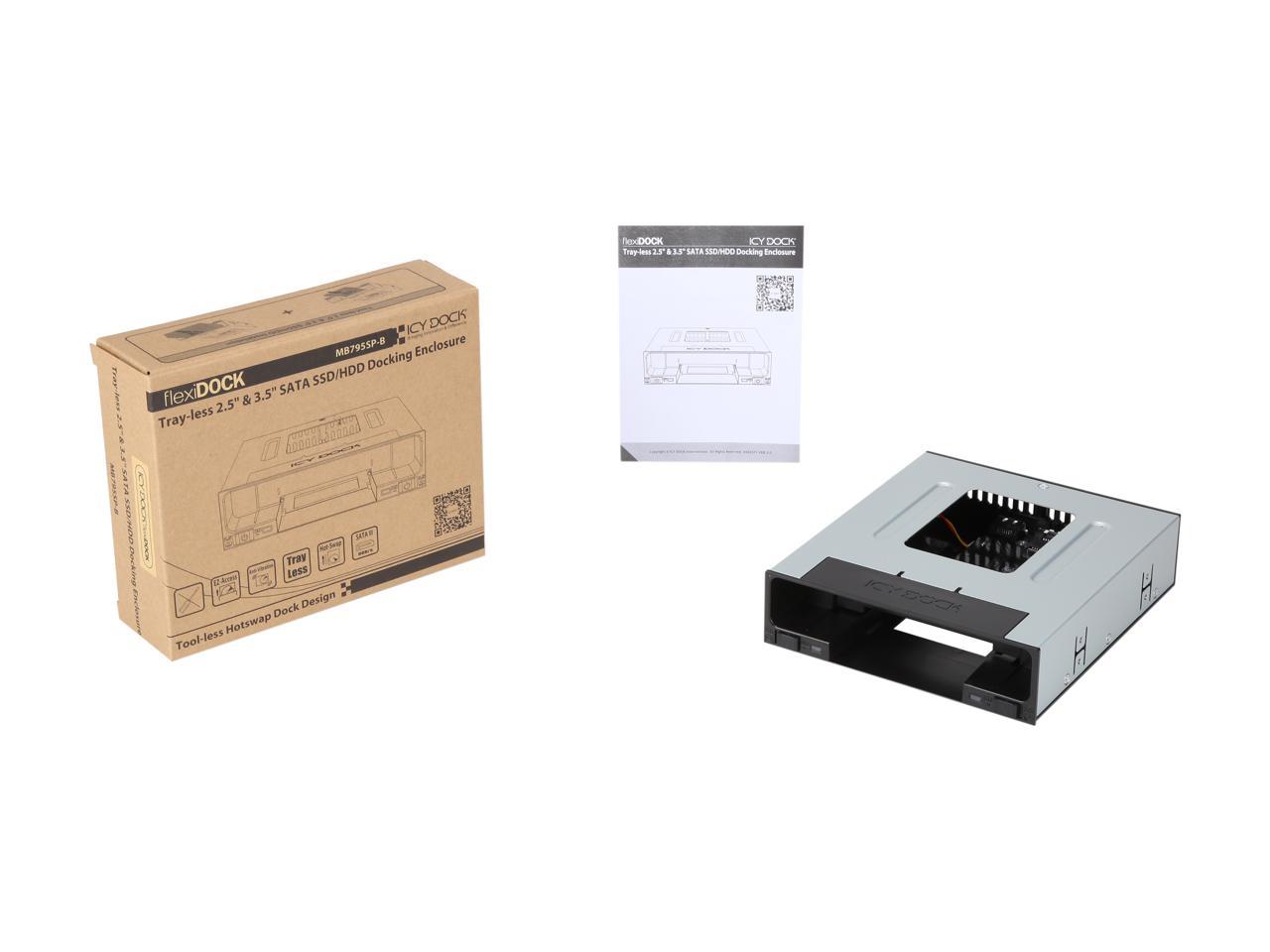 Pros: I like the Flexidock, it works great for me. i use the 3.5 part of it. I'm sure the 2.5 works just as good. I bought 2 of them for 2 of the computers, thinking of getting a third. oh by the way I use a dewalt battery impact to install, no problems with stripping the screws

Cons: haven't found on yet.

Pros: - you can install a 2.5" SSD or laptop HDD and a 3.5" HDD at the same time if you have the SATA ports to support it of course. Only uses one SATA power connector. - installs in single bay

Cons: - I have an old model that actually has a flap door on both the 2.5 and 3.5 entry. This newer model doesn't seem to have it which will increase the likelyhood of dust entering the unit, but canned air can manage that to some degree.

Pros: This Flexidock arrived in the nick of time. The plastic front door hinge on my Rosewill RX-C202 front panel dock broke. This is the 3rd time the hinge broke on this type of dock. This same model is sold by many vendors and the hinge will break like macaroni. The new Icy Dock flexidock works just fine and I only gave it 5 stars, instead of 4, because it appears to be better than anything available. The CONCEPT of the doorless, trayless rack is excellent but Icy Dock could make some refinments to make it even better..

Cons: This dual SSD rack is made for all thicknesses of the SATA "2.5" SSDs. This complicates the design. More than 90% of the new SSDs are only 7mm. I would hope for a Flexidock model that is for 7mm SSDs ONLY, because it would simplify the design. It would probably make the operation smoother too. TWO UPDATES: 1. The Flexidock comes with 4 short screws. They should be used. Longer screws will interfere with ejection, making it more difficult... with a drag. 2. The SAME LED works different for a Crucial MX200, a Samsung 850 Pro, and a Adata SU900. Seems there is a design fault for the LED POWER and ACTIVITY. For the Samsung, the LED works only for Activity. When activity stops, the LED is OFF and it should be steady On. For the Crucial the POWER LED lights up, but the ACTIVITY blinking is much slower. For the Adata, the Power LED lights but there is no activity light at all. ! ! ! !! So this shows that how good the LEDs work depends on the SSD. !!! Obviously, there needs to be some changes in the circuit board at the rear so that the LEDs work the same for every SSD.. !

Overall Review: I got this new Flexidock at a bargain price and wish I had ordered several more as replacements for the other unreliable models, like the Rosewill RX-C202 or the Star Tech HSB220SAT 25B that are suseptable to breakage at the plastic door hinge. Eventually all older models of these SSD hot swap racks, with the plastic door hinge, will have to be replaced by something like these new Flexidocks. External front panel SSD docks are great for cloning SSDs.

Pros: none as of yet

Cons: EXTREMELY tight with Samsung SSD. Mine does not work. Drive will not fit in top bay and is never recognized in lower bay. Pull SATA cable off the back of bay, plug in hard drive and computer recognizes drive immediately unplug drive, reattach cable to dock, plug drive in and the eject button on dock lights up but drive never appears in disk management or anywhere else .

Overall Review: Save your money

Manufacturer Response:
Hello Richard, I'm sorry you've had this problem with our product. Your model, and with all ICY DOCK products, is backed by a full 3-year warranty against all defects, and we can get this issue solved for you. I am including a link to our contact page, we have options for email, phone, and live web-chat support for your convenience.

Pros: This product was the only available choice that I could get a dual bay and still have 600 MB/s on xfer speed. Bay installed without problems and seems very durable so far in my usage.

Cons: Price seems high for what you get. I was hoping that the bay would just use one SATA and power connector. Instead you must use two, one for each drive.

Overall Review: The unit does as advertised. It delivers great performance with two drives attached. You can power them on or off in any configuration with the external switch. Boots nicely in my old system. My suggestion for improvement is that I would like a dust shield for when the device is not holding any drives.

Pros: In theory, it can allow you to boot between multiple operating systems in a breeze... If the hardware works. (

Cons: Junk made in China as cheaply as possible like most electronics. The first unit had issues right out of the box and had to be returned. The replacement unit last about a year before one of the least frequently used drive power buttons went out. The drive power buttons are the weak link. The one that failed has probably been touched less than 20 times.

Overall Review: Good concept. Poor delivery. Of course it allows you to swap out drives but I didn't use it for that purpose. I was using it for simply booting between two operating systems. But here's the deal I hardly ever do that... Like one a month. So I literally had a button fail on me about about 20 times. But of course since I don't use that feature that much the device is past any warranty.

Pros: I have no positive experiences with this product.

Cons: This device held my ssds so tightly in the bays that the eject buttons were almost impossible to operate properly to eject them. It was not just one bay but all four bays. The pressure needed to be exerted on the eject buttons to eject the ssds was beyond excessive. It gave me the uneasy feeling that something would break. I never attempted to install this unit into my case after experiencing the harsh functioning of this device. All my Ssd drives are Samsung 850. It was not a situation of my ssds being of non standard dimensions. Just the luck of the draw I guess. I was eventually issued a refund for this item. I will look into the unit which has individual Ssd mount cages for the seperate bays as a viable option.

Overall Review: No, I can not recommend this item based upon my experience.

Manufacturer Response:
Hello William, Thank you for the review and we apologized you had complications with your device. If you were to still have the device in hand, I would suggest contacting ICY DOCK USA directly to get your issue resolved. Please keep in mind when you purchase ICY DOCK products, they all come with a 3 year warranty and this issue would've definitely covered it. I hope one day you'll give ICY DOCK another chance. Thank you!
Joanne M.
Ownership: 1 week to 1 month
Verified Owner
I like this quite a bit4/14/2020 10:29:24 AM

Pros: I like it a lot for my use. The feature set is spot-on. Perfect for my application.

Cons: Here's what I don't like. The force required to eject an SSD is excessive. Perhaps with use it will get easier. But because the SSD is flush with the front housing when installed, you must use the eject mechanism. I tried a SATA-SAS adapter to extend the disc outside the enclosure so I can actually get hold of the SSD and pull it out. This will probably work OK. A re-design or a separate version to extend the SSD would be good. You could eliminate the eject mechanism. OR, reduce the force required.