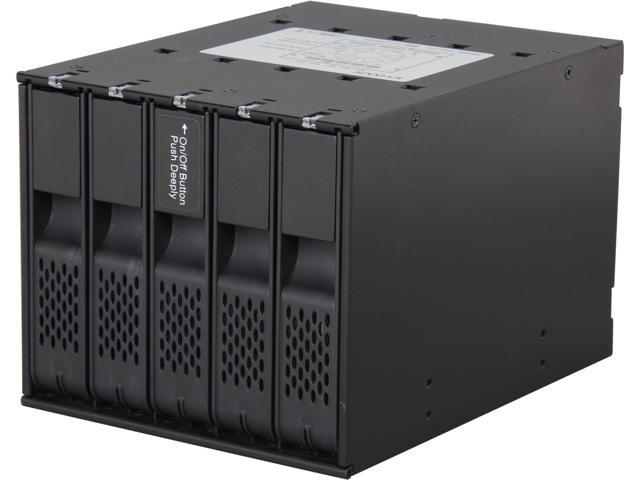 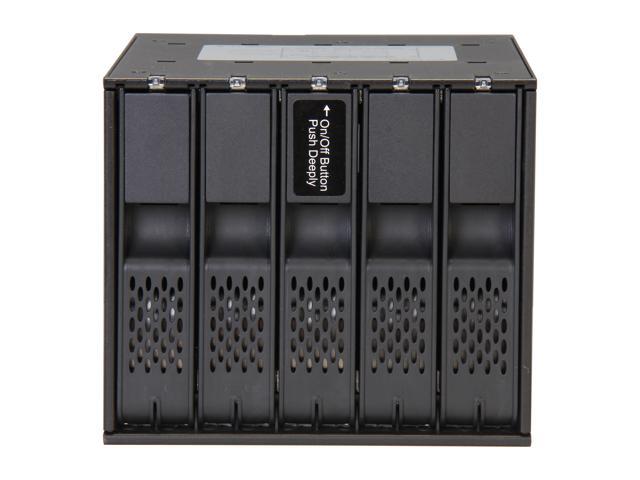 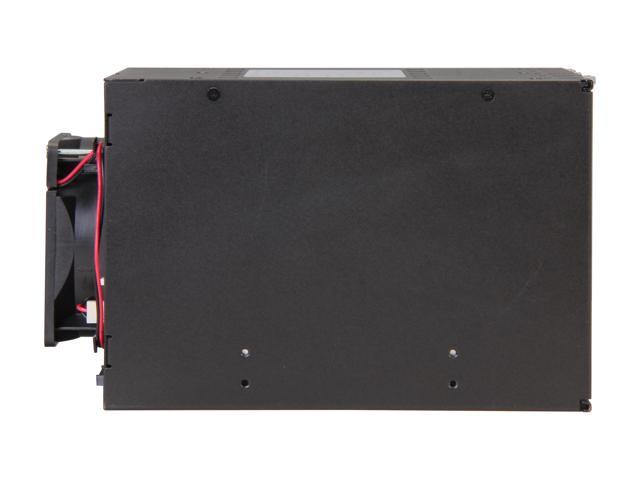 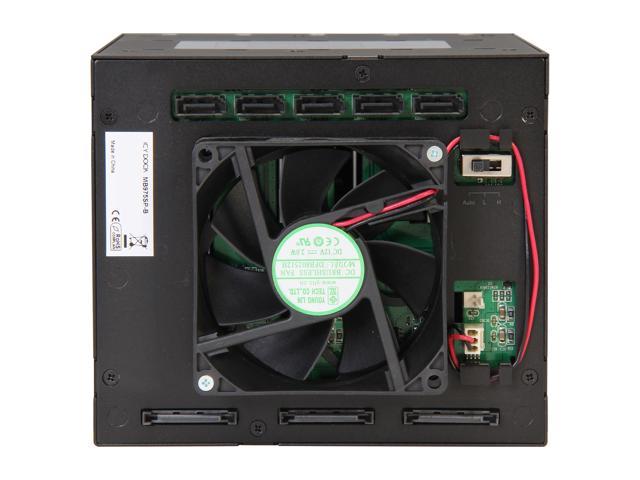 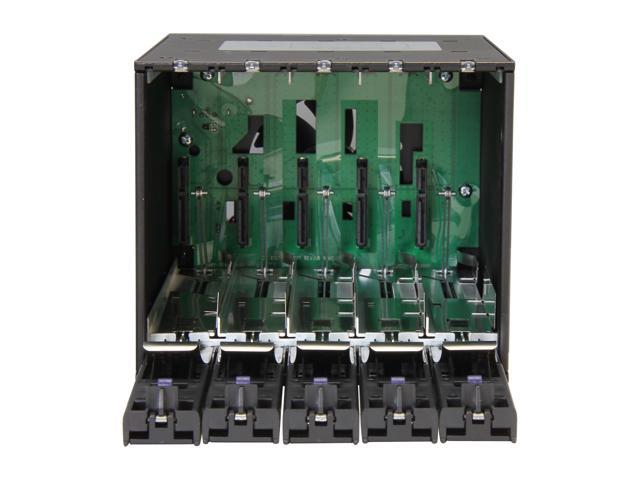 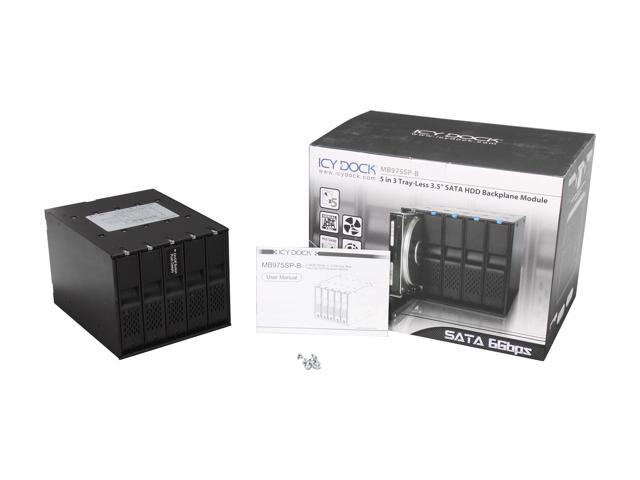 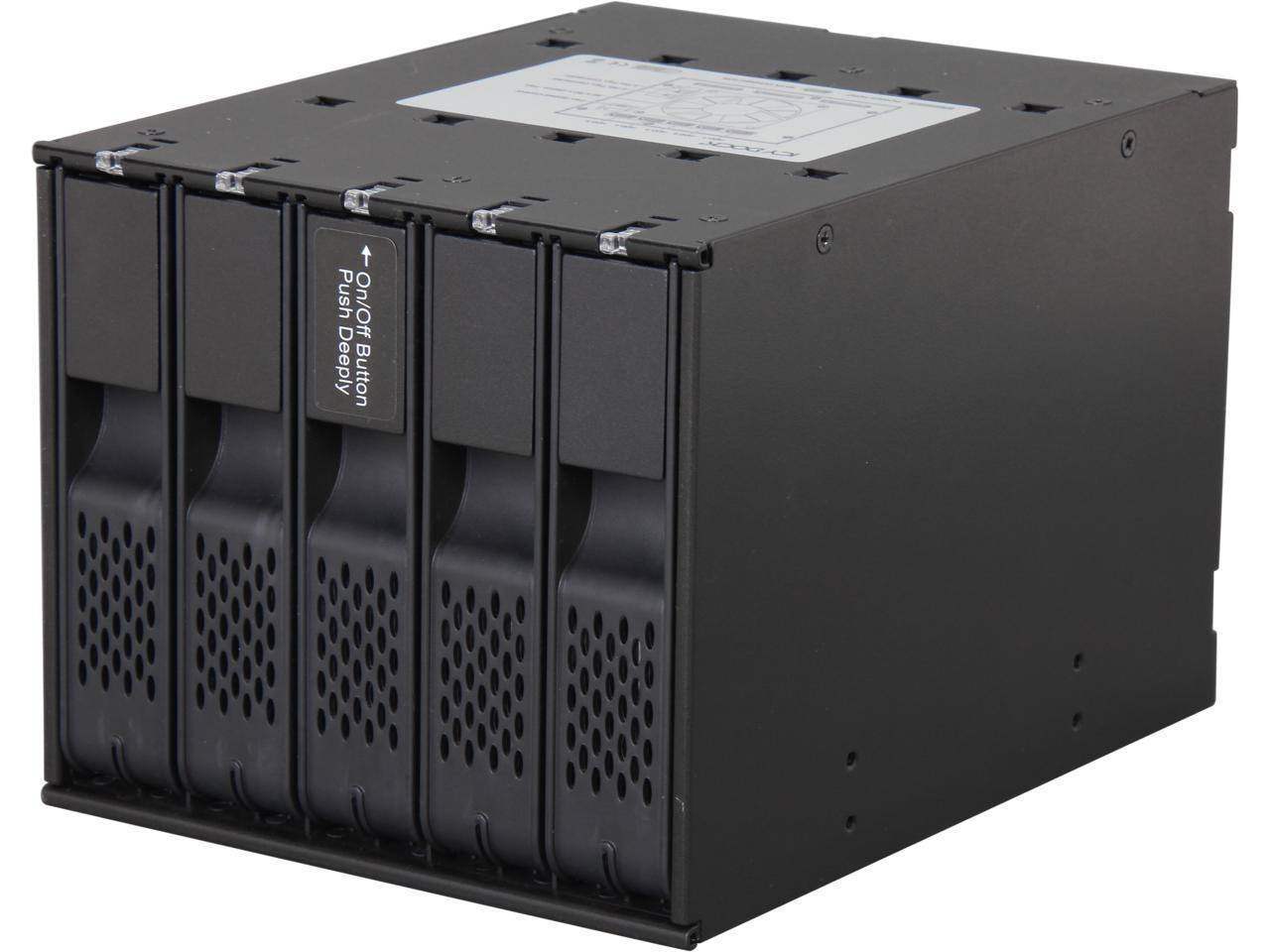 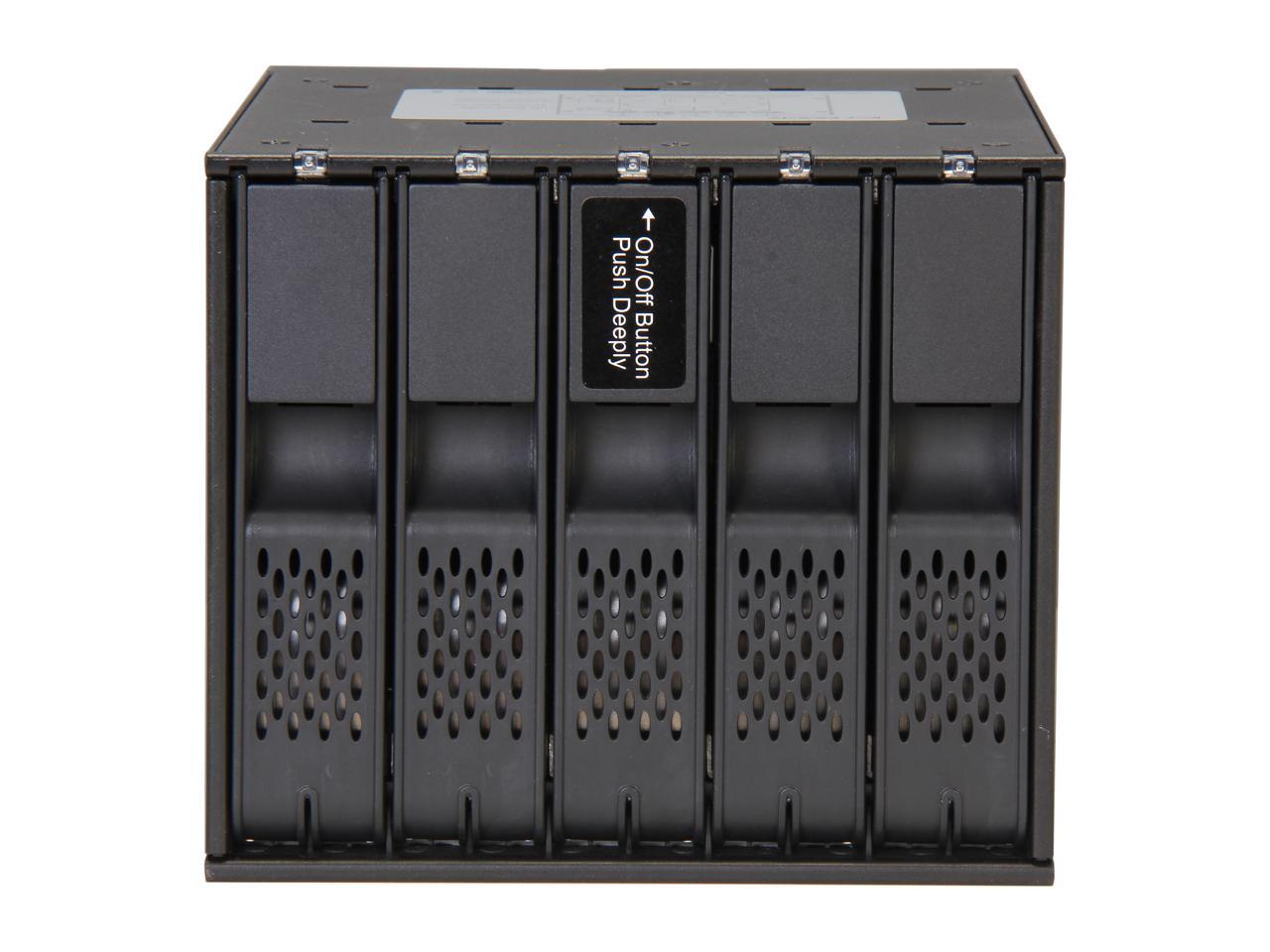 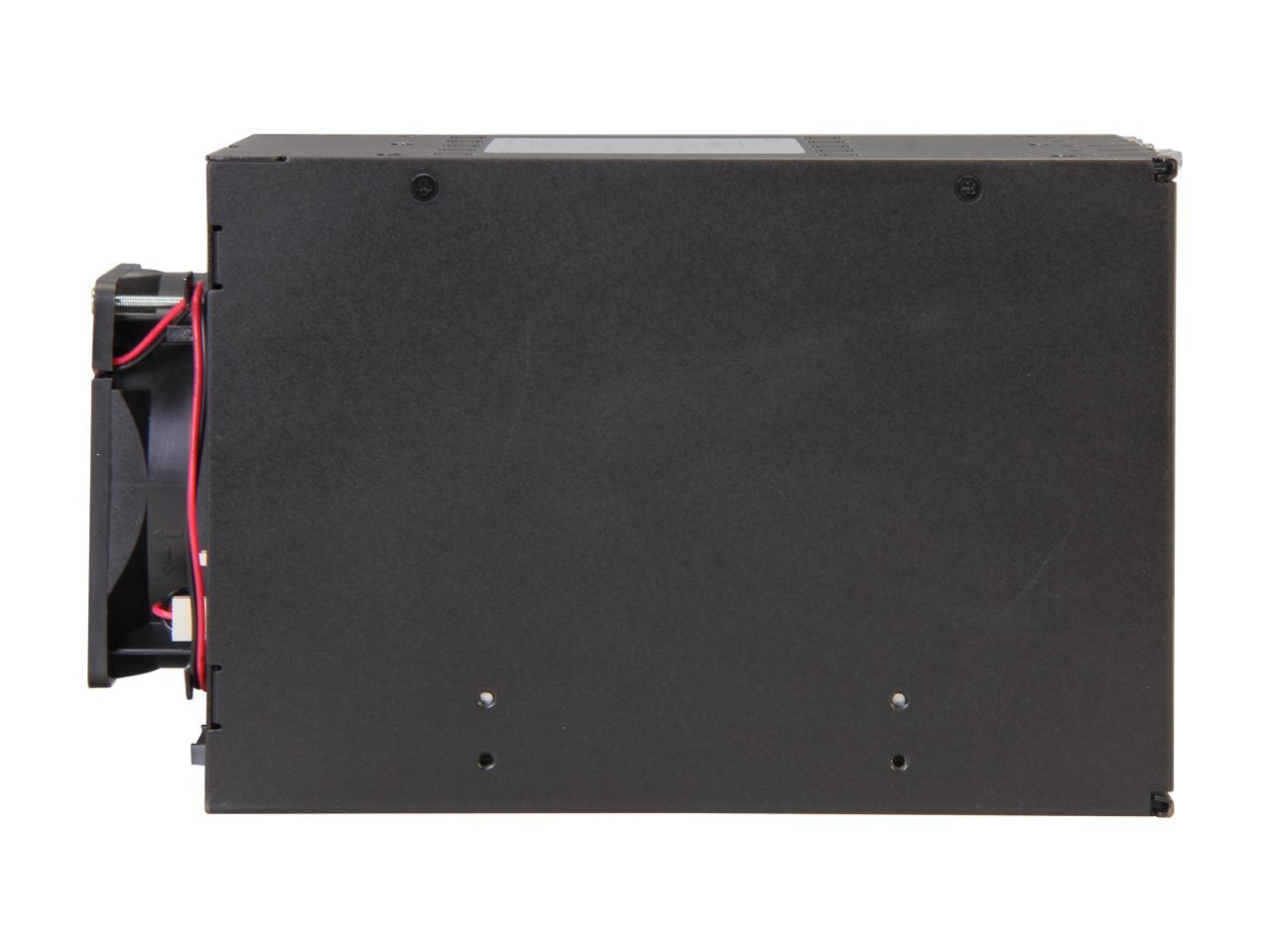 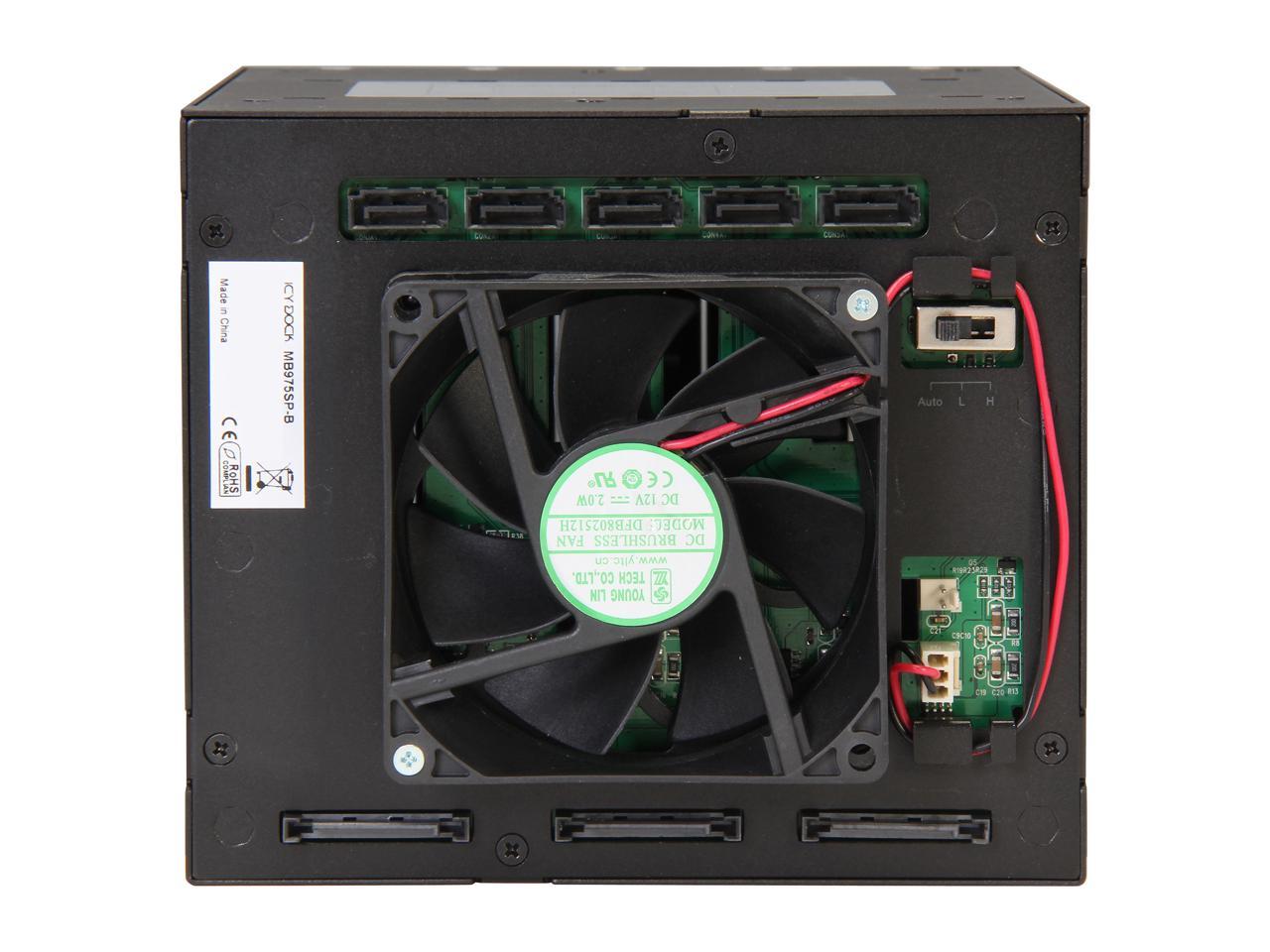 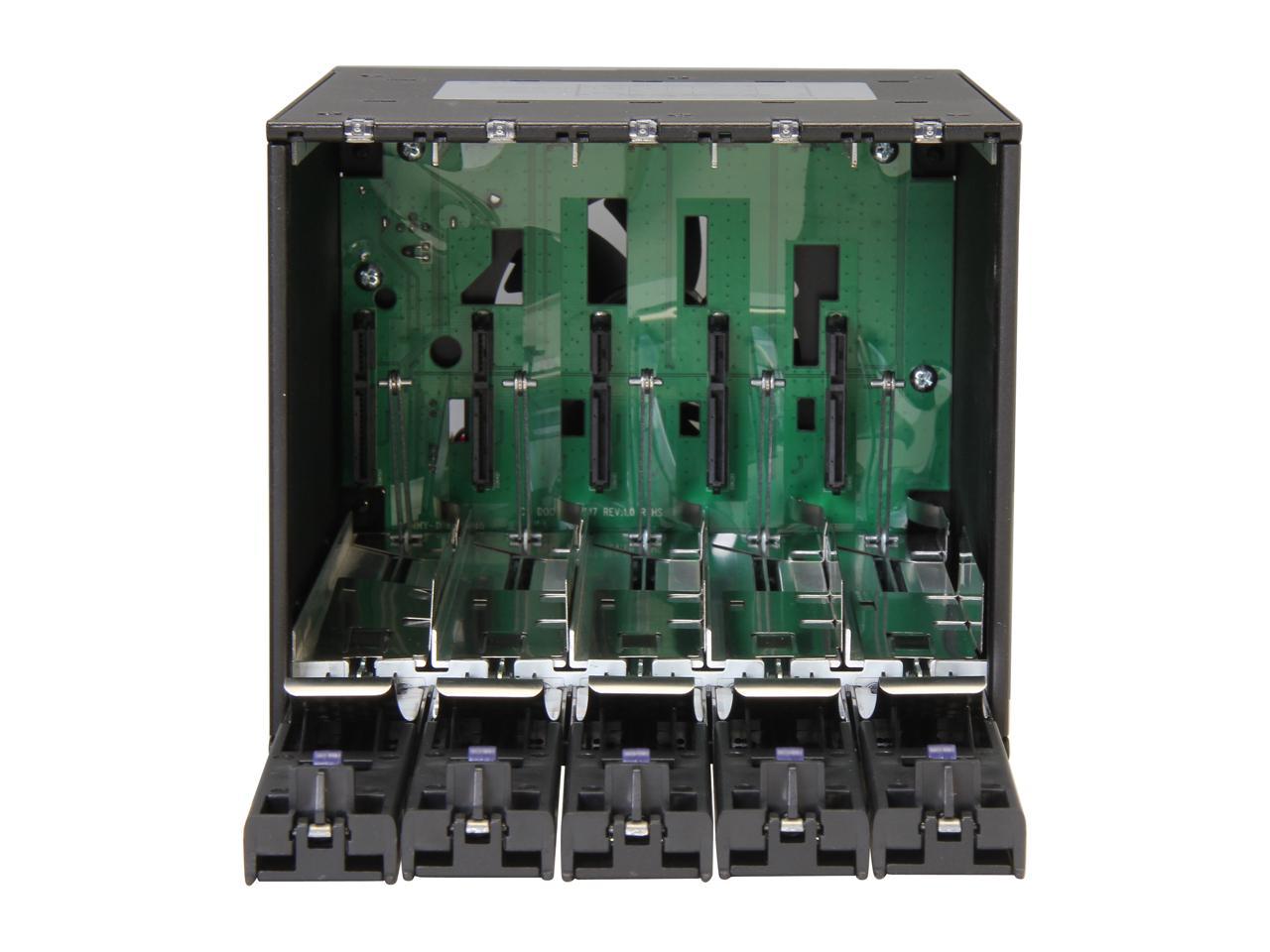 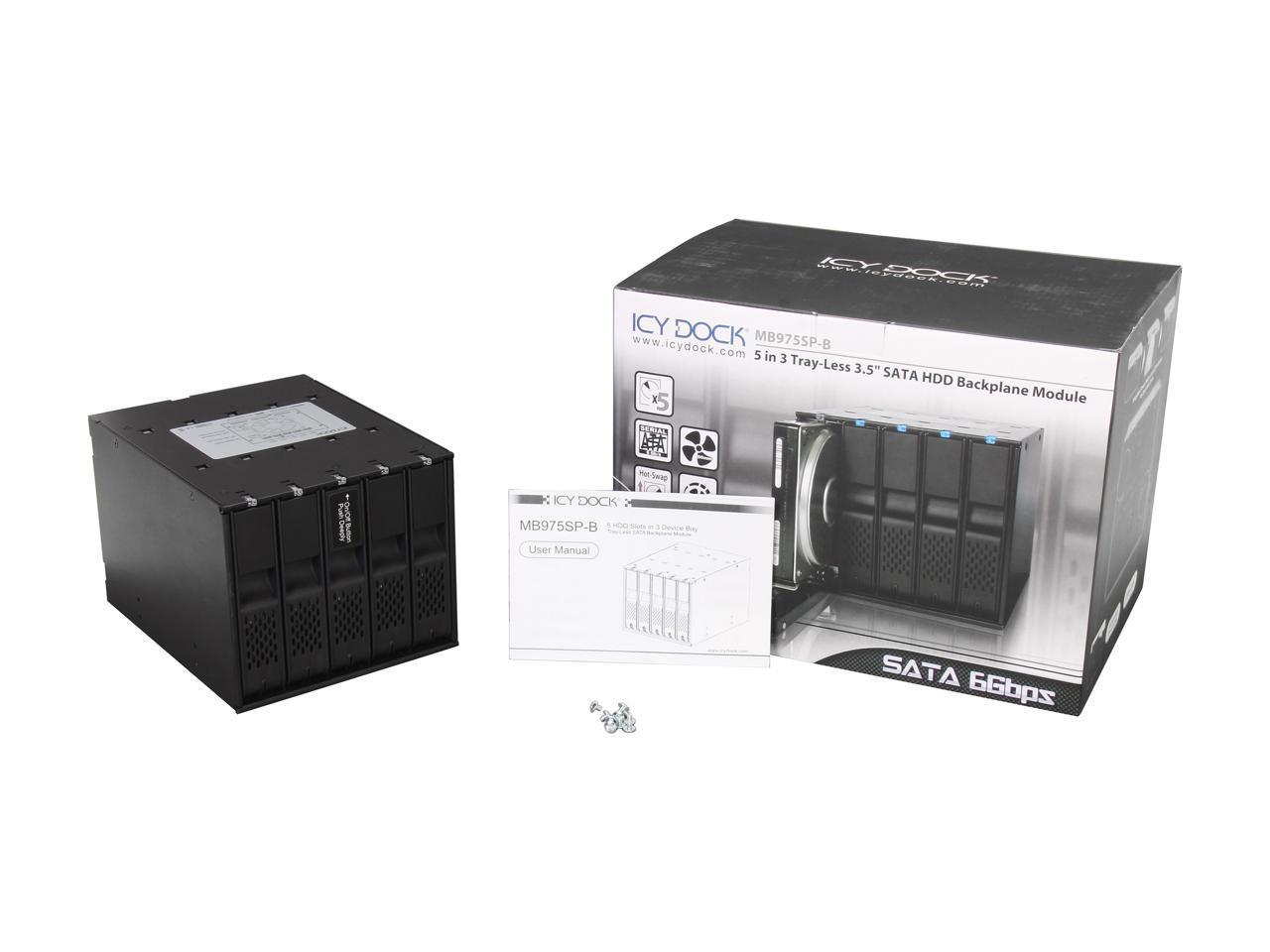 Introducing the FlexCage MB975SP-B, a 5-in-3 Tray-less SATA 6Gbps HDD Cage for 3.5" SATA hard drives. The FlexCage focuses on maximizing storage density, while using the least amount of 5.25" device bays possible. To complement the device, the FlexCage uses features such as: Elegant plug & play Tray-less design, replaceable 80mm cooling fan, 3 speed fan control with Smart Cooling Technology, and full control of your drive with individual power buttons. With a large density of drive storage, it can be used in consumer, enthusiast, and system integrator systems that hot swap drives frequently. The FlexCage is compatible with most gaming / media / server computer cases, and it is perfect for file server application such as unRAID, Windows home server and others.

Cons: Faulty design: 1. All hard drives are too short to be pushed into place when closing the slot door requiring a small screw driver to finish pushing hard drive into backplane sockets. 2. Backplane hard drive sockets have become intermittent after minimum use over 1 year. 3. This flawed design has resulted in blacklisting ICY DOCK trayless designs from future projects. Poor engineering.

Overall Review: I'm having to replace the over priced ($140.99 when I purchased it) card cage. And it will not be an over rated ICY Dock product.

Pros: Cooling is a con, as it is barely adequate, but I'm listing it as a pro, also. It's as good as it can be considering the 5 in 3 and they've even added an auto-ramp fan speed mechanism to reduce noise. I don't thing better is possible. Overall, this device does a good job, looks decent, and is well designed. I will buy more of these.

Cons: The doors are flimsy. They don't always catch properly because the doors bend to either side of where the striker mechanism resides. Cooling is not great but probably as good as can be expected for a 5 in 3 and good enough.

Overall Review: 5 in 3 is not the best idea. When you need it, you need it, but consider something like the Norco RPC-4020 (or similar) if you need a bunch of drives.

Overall Review: if you want to have the highest hard drive density and cool design this is one to pick

Overall Review: Bought this to replace an old Sata II 4x bays. Wish I didn't... Hard for me to explain all this with my bad english but hope it help others to know what their gonna get ... Hard drives was hard to install. Sliding in the hard drive and then closing the bay's 'door' should push the drive inplace. Thats not the case however, as only (1) of my hard drive fit like that. The 'door' won''t snap close for the rest of my drives!! Many attempts later with frustration, I use a screw driver to push the drive to see if it's all the way in already, it worked. The hard drive went in further. So the 'door' design wasn't strong enough to force the hard drive inplace to connect the Sata and Power. Had to use a screw driver (as my fingers won't fit) to push the drive in further while the 'door' had to be half closed. =/ Also the 1st bay (from the right) was even harder to install my drive to. It was too 'tight'. It didn't slide in smoothly, had to use further force just to slide it inplace. Because of that when took out the drive, the bay 'door' broke!! When you open the door, the bottom piece pushed a 'lever' to push the drive out. But it's connected by plastic, so the plastic piece broke. The bay 'door' is now held in place by .. tape =/ So overall, very bad experience. Now I need extra tool just to install drives, and be extra extra careful not to break the rest of the other bay doors. And as for the 1st bay, If I need to take the drive out, I would have to first take out 2nd bay drive, that would give me enough room to put my hand in to pull out the 1st drive ... so frustrating ... so much for easy plug and play hot swap drives... =(

Pros: Trayless, and you don't need all three SATA power connectors connected for all the drives to power up. Ask me how I know.

Cons: The doors are cheap and flimsy. The latches are lousy. There's no indication that they've latched until you stop pressing and they stay in or not. Drives have to be pressed in hard to get them to connect with the backplane. Due to the eject system, the drive is only seated when the door closes, so it involves pressing much harder than seems safe on the flimsy doors. I'm using WD Red drives. The drives bind sometimes when installing, but it's real easy to tell this is happening before you need to press them in. The buttons for powering off the drives are EXTREMELY cheap, and poorly positioned. One of the buttons was faulty out of the box. Only playing around with it for a while was I able to make it go. This is a problem if you're swapping drives on a running machine. Also, their location and operation make it likely that some cases will not work with the buttons. They're on the outside edge of the front of the enclosure, and I'd wager that on some cases they would get stuck when being depressed. Bad chassis material. I'm always very careful about how much torque I apply when mounting things in computers. However, it took no effort to strip out the screw holes using the included screws. Also, it was painted/powdercoated after the holes were tapped, making it difficult to start the screws.

Overall Review: I've had nothing but disappointment with this drive cage. Reading other reviews I went into it carefully, expecting lowish quality, but they cut too many corners for me to recommend it to anybody. 2 eggs, because I got it mostly to work for now. Barely. I broke one of the power connectors when installing it in my case (Athena Power RM-DD3U36E708). Power plugs needed to be plugged in before it could be mounted in that case. All 5 bays still work with just the two plugged in. Totally my fault, and it ruins my chances of a refund. Bah. I'm buying a different (non-trayless) enclosure instead, and this one is going in the garbage the moment it arrives.

Cons: - Extremely flimsy - Drives don't fully seat, had to use some mounting foam to get them to sit right - expensive for the quality - Mounting holes didn't lignup correctly, not sure if this was the case manufacturer, or the dirvebay

Overall Review: - I would not recommend this product to other people based on my experience

Manufacturer Response:
Hello Scott, ICY DOCK customer support here. Would you mind taking a picture of your problem, and sending it to our tech support team? I will include a link at the bottom of this message called "Contact Us" with our contact information. This is an issue that should not happen with the MB975SP-B, and is not common. Your product, as will all of our products, is covered by a full 3-year warranty, and I would like to see that this gets resolved. We have options for support through email, phone, or our Live-Chat system. Please do contact us as soon as is convenient for you, and we will help you with your issue.

Cons: Cheap Quality - One bay never worked out of the box because cheap plastic power switch was stuck in 'Off'. Doors – They don't stay closed if cage is full. Trying to close doors was like game of whack a mole. As soon as I close one door the adjacent one would pop open. Doors are loose and wiggle when pulling down. A tiny metal stub is all that protects your drive from being ejected. Weak Cooling - The backplane blocks most of the fan air and the micro cutouts do little to provide anything but sub-par airflow for the drives. Bracket holes - The most annoying thing is there is not enough chassis bracket holes on the left or right side of the cage. If you want your drives arranged horizontally in a 4U case, this cage will be unbalanced. Had to use cardboard to adapt this to fit. This won't fit in standard tower case without using pliers to bend 5.25” clips.

Overall Review: Would not recommend or buy this again. You will not save any time using this frustrating cage over hotswap trays. I'm constantly worried drive will pop out. Recommend Supermicro's 5-in-3 CSE-M35T-1B. Although not tray-less, it costs less and is much higher quality.

Pros: Just to clarify i do not own this item yet. I am looking forward to using it in an upcoming build. This is an Internal backplane/drive cage, it is NOT an external enclosure for running HDD's outside of the system. Icy Dock makes great items and this one looks to be another home run: Full metal housing no separate drive cages, just open and pop in the drive Replaceable/upgradable cooling fan, (can take any 80mm 2 or 3 pin fan) Massive capacity (4TB Support x 5 drives) No ancient molex connectors, all 15pin SATA power connectors

Cons: Dont know yet, will update when i get one of these. (hopefully soon)

Overall Review: Looks to be good on paper, cant wait to try it. and again THIS IS AN INTERNAL DRIVE CHASSIS/BACKPLANE NOT AN EXTERNAL ENCLOSURE!! Good luck with your build if you get one!!