By Adam LovinusOctober 28, 2020No Comments 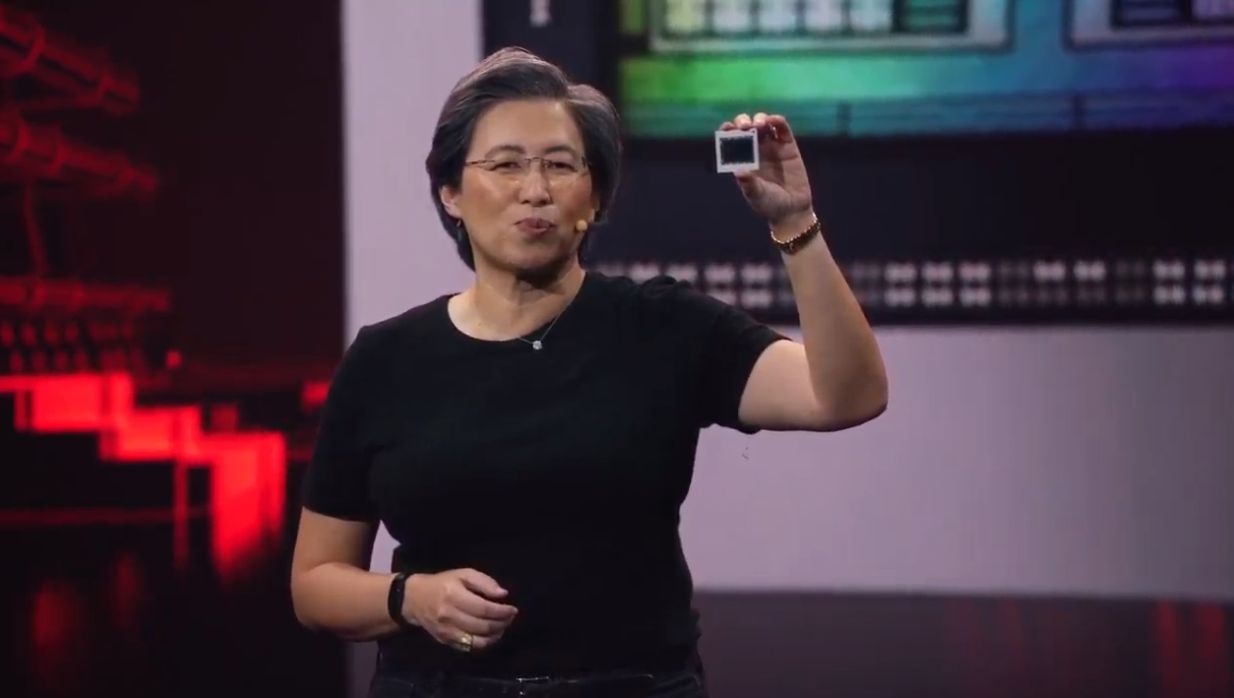 Today AMD announced its latest graphics cards for gaming and content production, the latest “Big Navi” chips — the Radeon™ RX 6000 Series Graphics. Over the past three years, AMD has built its reputation as the pound-for-pound value leader in graphics. The previous generation, Radeon RX 5700 XT and Radeon RX 5700 offers their signature bang-for-buck value proposition. Will the 6000 series offer something that punches in the same class as Nvidia RTX 3080?

Anticipation heading into the launch event concerns whether AMD has the goods to dethrone NVIDIA’s Ampere chips as the undisputed GPU leader for high-end gaming systems. We won’t have a definitive answer to that question quite yet, but there certainly is a lot to be excited about right now. 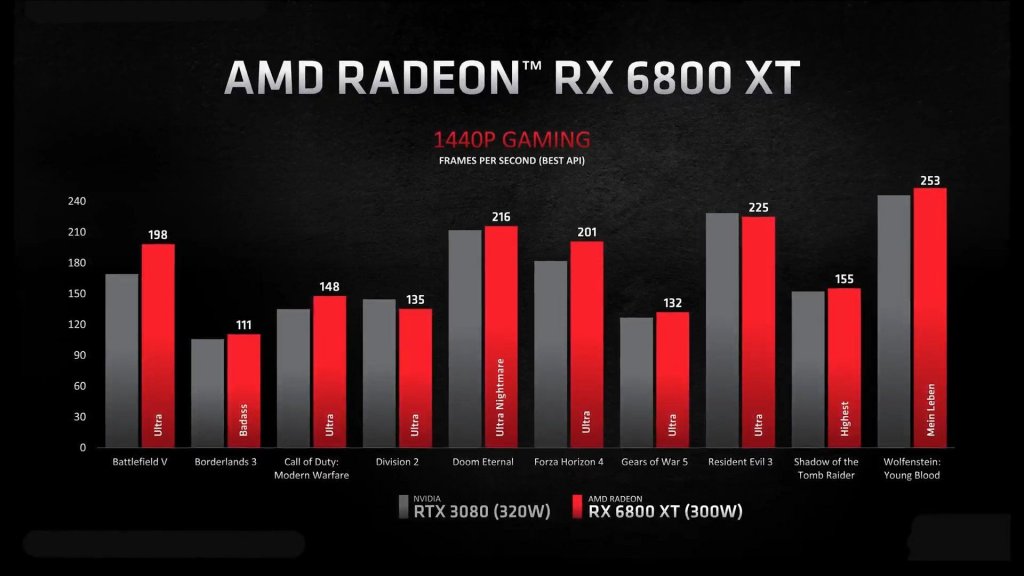 Targeting GeForce RTX 3080 in its performance specifications, AMD shows Radeon RX 6800XT beating the RTX 3080 in 4K and 2K gaming across several titles, and performed evenly in others.

Perhaps the most important comparison is how Radeon RX 6800XT achieved this level of performance drawing less power than RTX 3080 – consuming 300 watts of power, 20 watts fewer than RTX 3080. Less power means less heat; gamers interested in keeping their systems running cool while playing titles that test the performance limits of their build will appreciate that. 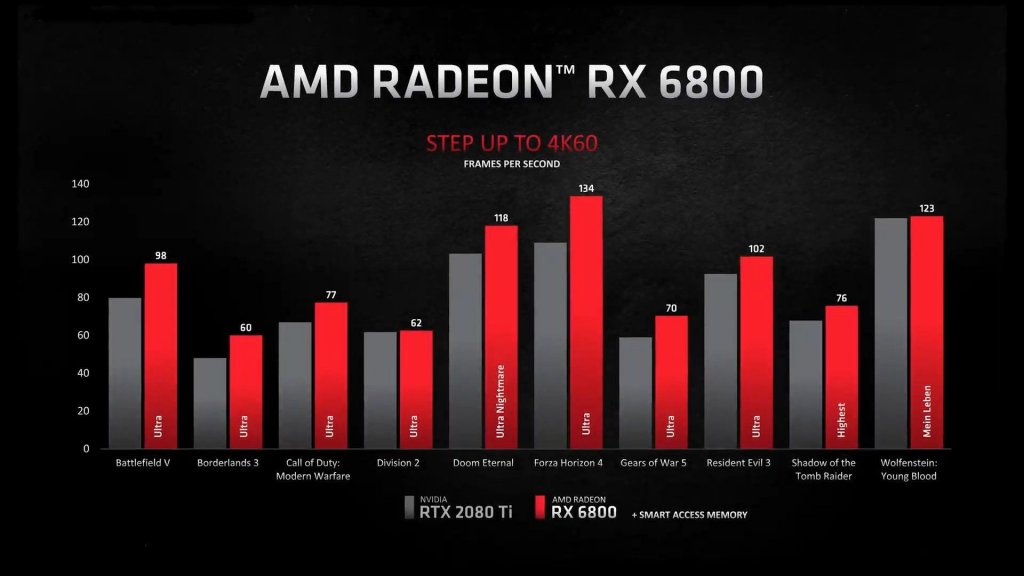 This slimmer version of RX 6800 XT, RX 6800 features fewer CUs and shader cores than the XT while harnessing the same 128MB of Infinity Cache. In terms of pricing and performance, it is positioned against the NVIDIA RTX 3070 for the high-middle gaming systems, and matches up well against NVIDIA RTX 2080 Ti also. 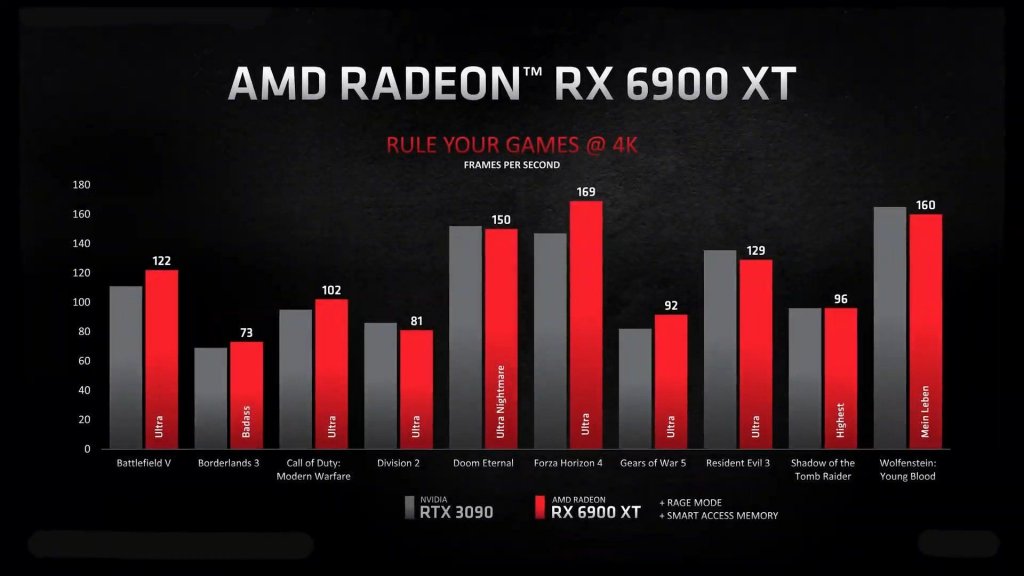 AMD CEO Lisa Su always saves the best for last, showing us the flagship at the end of the event. RX 6900 XT is AMD’s most powerful graphics card ever, matching performance against RTX 3090 across several popular gaming titles. The RTX 3090 is one of the most expensive graphics processors on the market, and AMD is undercutting the $1,500 price point substantially.

Chips with AMD’s RDNA 2 architecture are shipping in next-generation console systems in the coming weeks, with the launch of PlayStation 5 and Xbox Series X and Series S. Now we get to see RDNA 2 architecture in action inside a gaming PC. Back in March, AMD anticipated that their latest graphics   microarchitecture design would provide a 50 percent performance-to-watt improvement, and features like hardware-accelerated ray tracing, and variable rate shading. They seem to have delivered on all of these.

Smart Access Memory is a feature you will only be able to take advantage of if you have a full AMD system, combining a 5000 Series CPU, an RX 6000 Series GPU, and a B550 or X570 motherboard. With those powers combined, you can take advantage of high-speed GDDR6 graphics memory to accelerate CPU processing. AMD’s provided benchmarks indicate that this feature can provide up to a 13% performance boost in Forza Horizon 4, running at 4K, with the new auto-overclocking option known as “Rage Mode.”

AMD’s new GPUs will fully support DirectX 12, and that includes the implementation of DirectX Raytracing, also known as DXR. This will enable the cards to “deliver real-time lighting, shadow and reflection realism” according to AMD. If developers begin implementing support for these graphical features into their games going forward, this would be AMD’s answer to NVIDIA‘s “real-time ray tracing” edge – though as we saw with NVIDIA RTX, it can take a while for game development to catch up and fully utilize the features unlocked by new hardware.

Visit the AMD page on Newegg for more information and to order these new products when they are available.