By Aaron MickunasFebruary 11, 2021No Comments

Solid state drives, or SSDs, are the dominant form of data storage in modern technology. And with this relatively newfound market dominance, more and more gamers try to maximize their effectiveness.

Inexpensive hard drives are sticking around as cheaper-per-gigabyte options for now, but there’s no denying the SSD takeover. Take for example new mainstream gaming consoles. The PlayStation 5 and Xbox Series S finally made the leap from HDDs to SSDs with their most recent generation. Not only that, but SSDs now come in way more varieties for PC owners, too, with the most popular being M.2, SATA, and PCIe drives.

We know that gaming performance can be affected by an almost impossibly high number of factors. And yes, those factors extend to SSDs, which are shown to impact a number of big-ticket performance metrics in games—graphical quality, load times, and more.

But what about SSD size, as in the total storage capacity of the drive? Can it affect performance at all? The answer is a nice, complicated, “sort of,” so we’re here to make it easier to understand.

The short answer to “Is a larger SSD faster?” is no. Barring differences in interfaces, if you buy a 2 TB SSD you won’t experience a meaningful performance difference than if you were to buy a 500 GB SSD.

But that doesn’t tell the whole story, nor does it do the question justice. Here’s why.

When you save a file to your computer, your SSD has to do some (very) quick math to determine where on the drive the data should be saved. It figures out where the next empty space on the drive is, and it fills it with the new data. Simple enough, but it can get a little hairy.

When data on a block is changed, the SSD needs to recalculate over and over again. Meaning, although the data already exists in a block somewhere on the drive, in order to change the data, it needs to find another blank block and move it there. Why? Because it cannot write data to a block unless that block is empty. If the SSD tried to change data that already exists in a block, it would destroy the data. 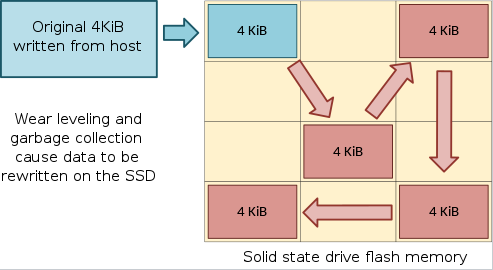 Write amplification: a sliding block puzzle for your SSD.

Writing new data entails copying the data from the existing block to a new, empty block, but with the changes included. The drive then marks the previous block as ready to be overwritten, so it can be used as an empty space for the next file that needs it.

For a single file, this process doesn’t really mean anything. But in a game, when things change on-screen very often, or in bulk when you load a saved game, it needs to happen on a much larger scale all at once. We’re talking hundreds or thousands of data rewrites. If the process is slowed down by even a fraction of a fraction, it adds up, even if the SSD can do all of this in a matter of seconds.

Due to the limitations of the technology, what actually affects the performance of a drive is its capacity, not its size. Specifically, we’re talking about capacity as a ratio of available drive space.

On a drive that’s more empty, the SSD can find those empty blocks much, much faster. The more data on the drive, the more time it takes the SSD to find the right spot to move that data, regardless of whether you’re writing brand new data or just changing a file that already exists.

But be mindful, because a 250GB drive at half capacity will likely still perform faster than a 2TB drive at full capacity. In general, you want to keep your SSD below 70 percent capacity, regardless of its size, for the best performance possible. Past that point, the closer you get to 100 percent, the slower you might notice it getting.

Use the 70/30 rule to optimize your system

Using the 70 percent rule, you can probably start to think of obvious things to try to speed your system up. When shopping for a new SSD, consider its capacity at about 30 percent less than advertised, with the assumption that you’ll try to not overstep that line. On your current drive, though, there are some steps you can take if you’re already noticing a slowdown.

Most modern operating systems, whether they be Windows, Mac, or Linux, come equipped with some sort of data cleanup program that you can use to easily identify data on the drive that you haven’t used in a long time, or temporary files that aren’t being used by anything, that you can then delete to free up space. If you can’t remove any data, it might be time to upgrade to either a larger drive or just another drive that you can transfer some of the data over to.

Along those lines, you can shop on Newegg for any M.2, SATA, or PCIe solid state drives. There are a handful of very reputable manufacturers, like Western Digital, Samsung, or Corsair, that have been making great SSDs for a long time. Another possible option, if your computer can’t hold any more internal storage drives, is an external SSD. Although it’s plugged in via USB, it’s possible to find external or portable SSDs that are still quite fast, so you can offload some of your data in an effort to free up your primary SSD (or to even use it as your new primary data storage).