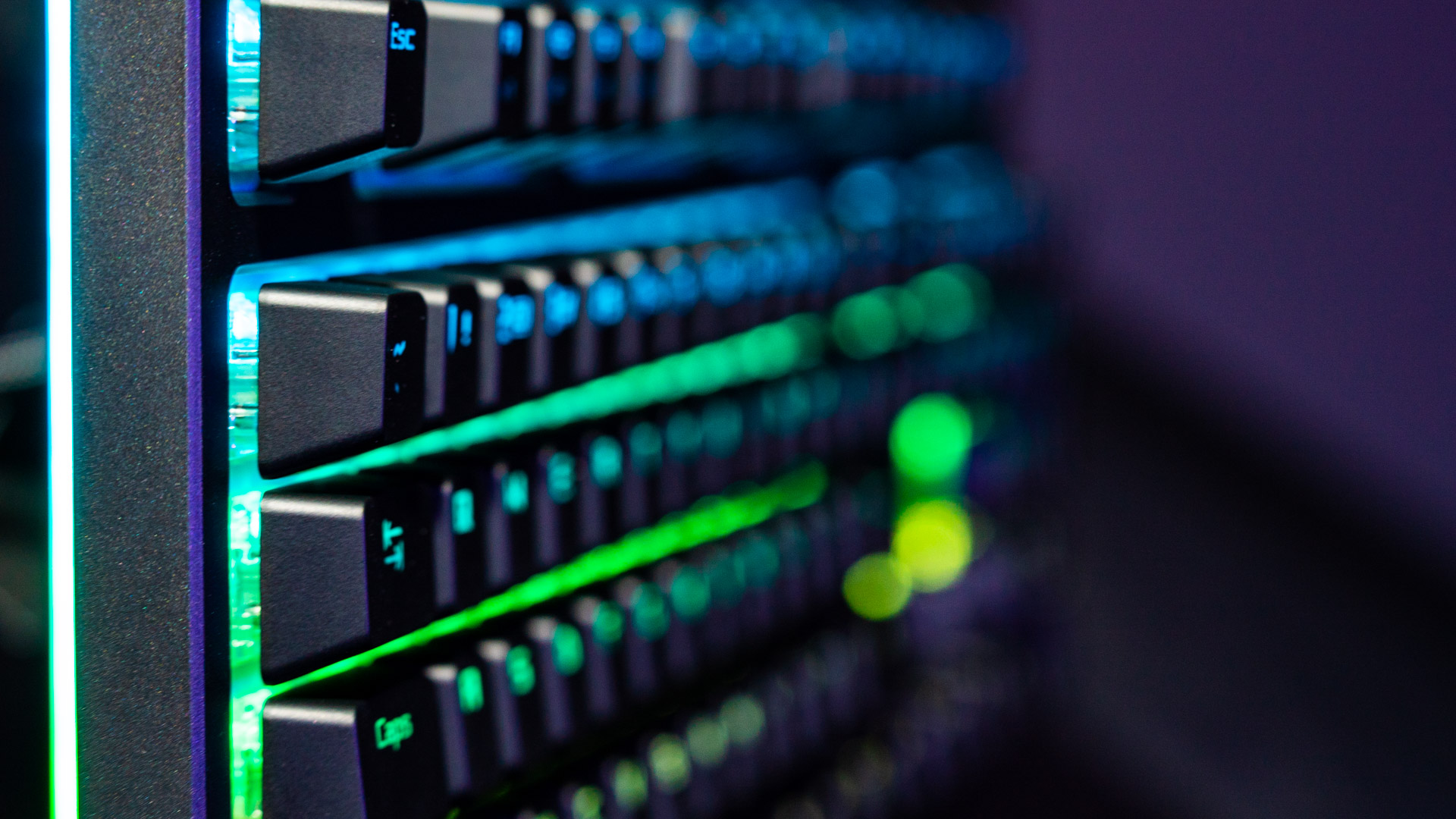 How to choose a keyboard

Between their central roles in both text input and PC gaming, keyboards have a tremendous impact on our overall computing experience. The right keyboards allow us to type faster and more accurately, with less fatigue, and the keyboard that comes free with a PC might not be the best.

Buying a new keyboard can be a complicated decision, though, and so we’ve put together this guide as an overview of the most important keyboard considerations. Once you have an idea of what you’re looking for, you can check out Newegg’s keyboard section to choose the right one for you.

We work with keyboards more intimately and often than we do just about any other piece of computer hardware. And keyboards have different kinds of key mechanisms, called switches, that determine how typing on a keyboard feels to the user. That means that typing on different keyboards can be very different experiences.

Specifically, keyboards have different tactile attributes – things like key travel, bottoming actions, responsiveness, and the amount of force required to register a key press – that all add up to distinct, subjective experiences. A keyboard that feels good to one person might feel terrible to another.

There are many kinds of keyboard switches, but silicone dome, scissor, and mechanical switches are the most common. Each has its strengths and weaknesses, and we’ll cover each of them briefly. Note that there can be great variation between keyboards made using the same mechanisms, and so getting hands-on experience with a keyboard before purchasing can be helpful.

Silicone dome switches use two rubber membranes formed into domes that are depressed when you press a key, which completes a connection between two circuits to send a signal to the PC. Less expensive keyboards typically use dome switches, and that usually includes those included with pre-built PCs. This switch type tends to produce a mushier and less precise feel, and dome switch keyboards use taller keys and require greater travel distance to register a key press. 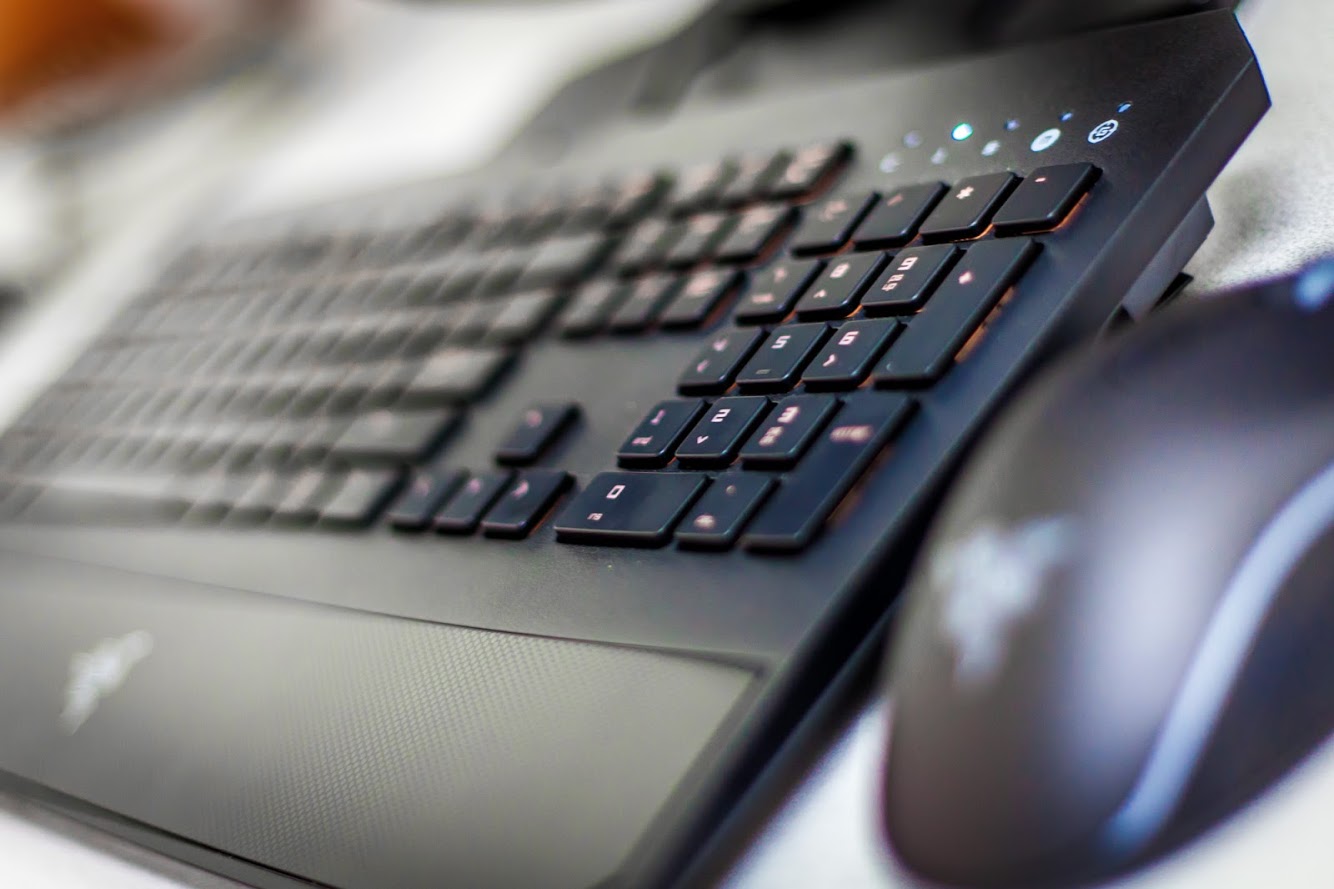 Scissor switches add plastic pieces that create a scissor mechanism to dome designs, which connects to the key caps and allows for shorter key travel and thus lower-profile keyboards. Modern notebook keyboards use scissor switches and provide a snappier feel with more precision, and they’re also often quieter and require less force. Newer Apple MacBooks use special butterfly mechanisms that allow for incredibly thin keyboards with extremely short travel but very crisp response – which some people love and some hate.

Scissor keyboards aren’t used only on notebooks. You’ll also find them in “chiclet” or “island” style keyboards that have the same kind of square key caps that you’ll find on most notebooks today. If they’re low-profile keyboards, then there’s a good chance that they use a scissor mechanism – although some do use simpler dome switches.

Mechanical switches come in many different designs, but each uses metal springs that are depressed when a user presses a key. They tend to provide the most tactile feedback, require varying amounts of pressure, and generate varying sound levels. Mechanical keyboards are favorites among gamers because of their precise responses and long lifespans, thanks to more robust construction.

They’re also popular among high-volume typists, as compared to dome switches because they can require less travel to register a key press. They can, therefore, provide a very fast and accurate typing experience. 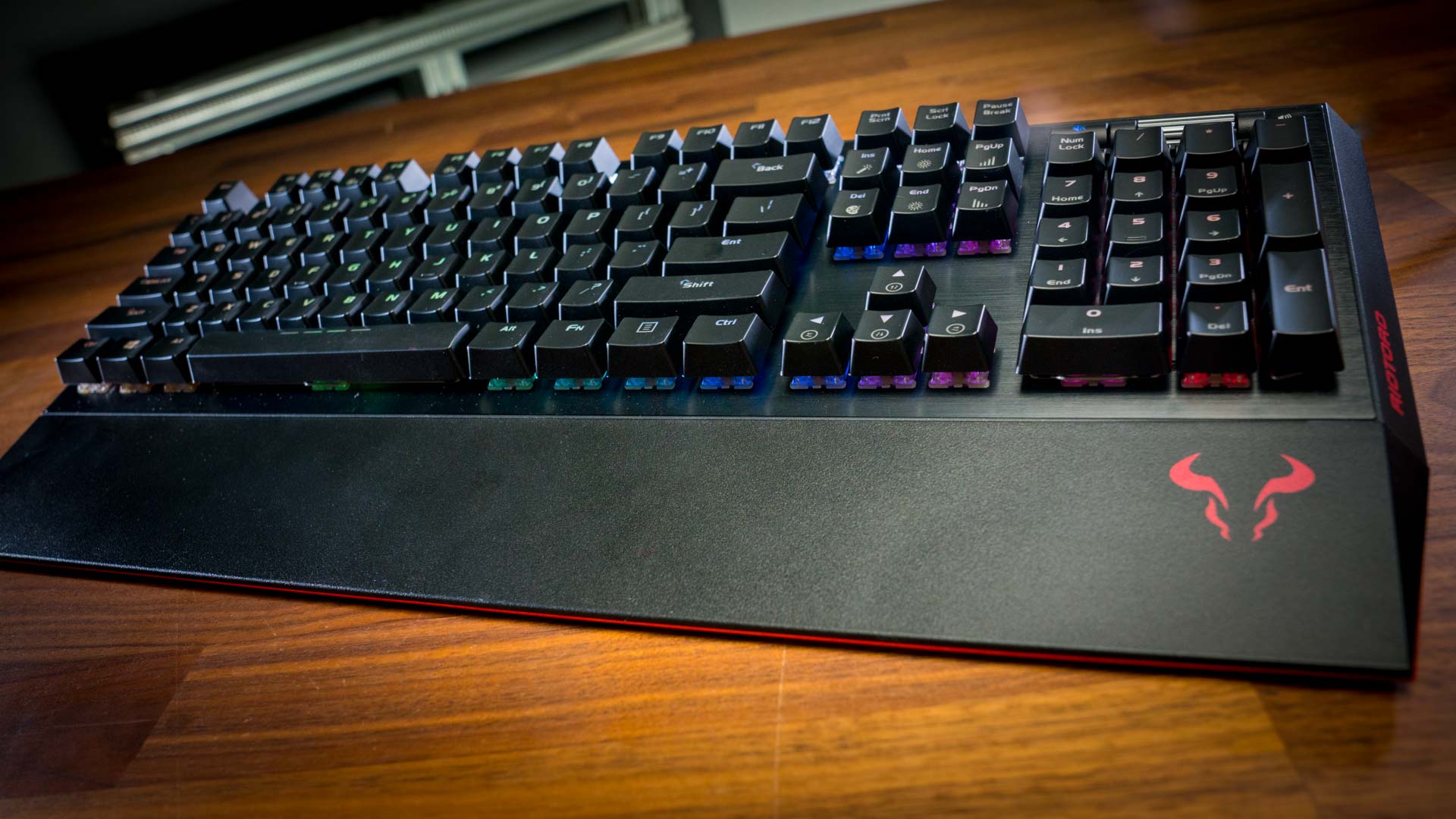 Most PC keyboards use similar layouts with the same sets of basic keys. These include:

There can be variations on these basic keys. For example, Apple keyboards use Cmd (command) and Option keys, and many newer keyboards include Windows and dedicated menu screens for working specifically with Windows 10. Some keyboards also include numeric keypads to make entering numeric data faster and more efficient.

There was a time when the standard keyboard had exactly 104 keys, but those days are in the past. Today, most keyboards have at least that many keys, but many have a few more.

If you’re buying a keyboard in the U.S. or most other countries that use a Latin-script language, then you’re most likely to see the “QWERTY” layout. Those are the keys in a line on the upper-left of the keyboard, and it defines the arrangement for the rest of the alphabetic keys as well. The Dvorak keyboard offers another arrangement that can provide for faster and more accurate typing, but it hasn’t caught on very widely.

Of course, that’s just the standard layout. Some manufacturers add extra keys to control other functions, such as multimedia keys for controlling audio and video playback, extra buttons for controlling the system such as sleep and power buttons, and more.

Typing is a repetitive task we often perform for hours at a time. As such, it can cause a variety of physical problems ranging from simple fatigue to more serious conditions such as carpal tunnel syndrome (though the data behind this connection isn’t as strong as you might believe).

Therefore, keyboard manufacturers make ergonomic models that are designed to force typists to hold their hands at angles that are more comfortable and that reduce stress. These designs can range from simply changing a keyboard’s angle so that the hands and wrists remain at a natural angle to splitting the keyboard to keep the hands and wrists in a “v” shape. 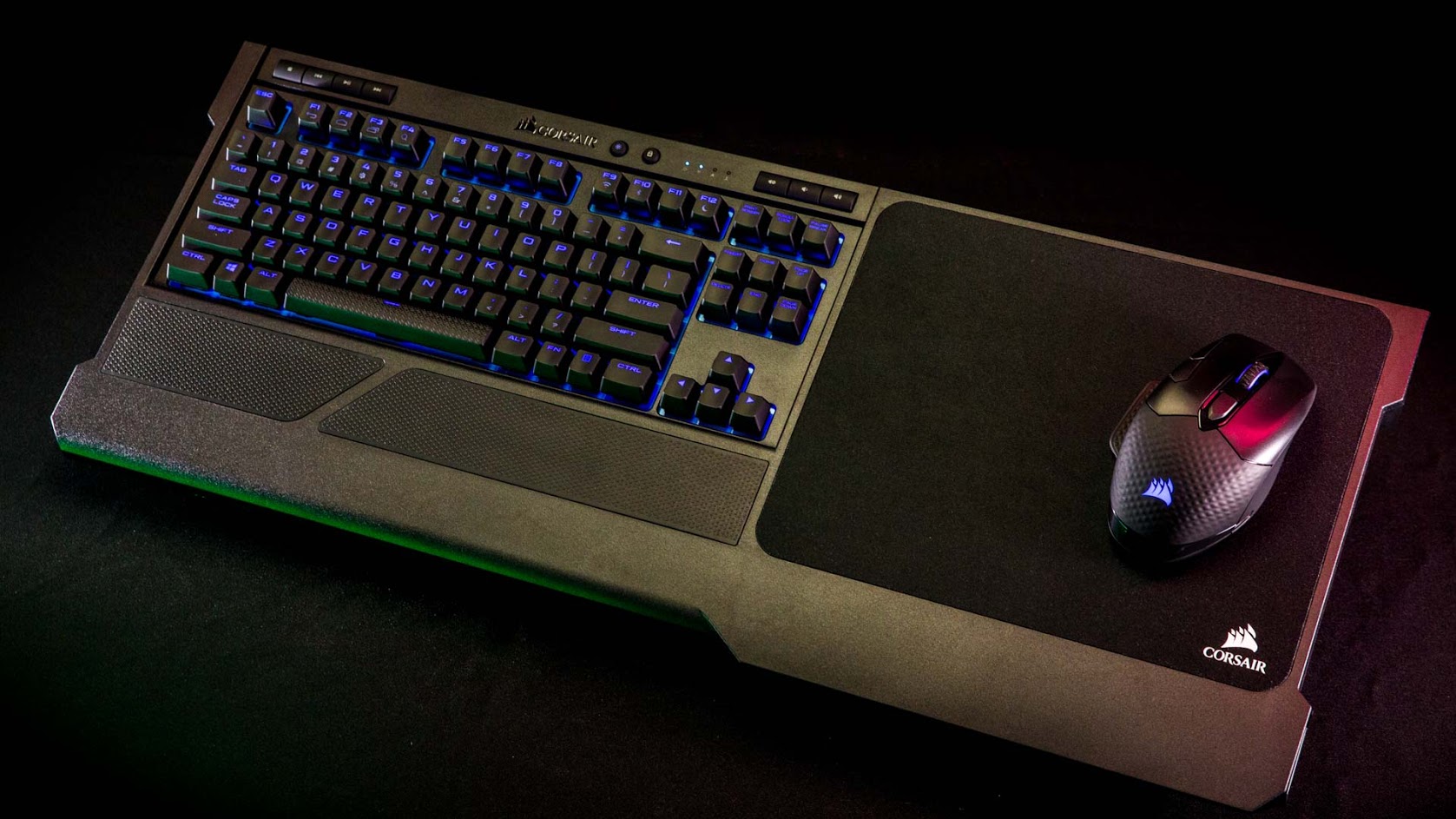 One of the most important considerations you’ll want to think about is whether to choose a wireless or a wired keyboard. The primary advantage of wireless keyboards is that users can more easily move them around, and they avoid having a cable – usually a USB cable with today’s keyboards – cluttering up your desktop.

But wireless keyboards do have some downsides. The first is that they need to be powered, which usually means either loading up the keyboard with replaceable batteries or plugging in periodically to recharge. Most often, users can also plug in the keyboard via a USB cable, during which time it works as a wired keyboard.

Going wireless can also introduce latency, which means that there can be a slight delay between pressing a key and registering its signal on a PC. Latency is particularly important for gamers, for whom split-second delays can mean the difference between in-game life and death. Manufacturers have significantly reduced latency in today’s today’s keyboards, but it remains a considering if you’re looking to pick up a keyboard for hardcore gaming (more on that in the next section).

Finally, wireless keyboards use one of two technologies for connecting to PCs. Some use radio frequency (RF) connections that can interfere with other wireless devices, usually in the 2.4GHz band. Others use Bluetooth connections, which are generally free from interference but require a Bluetooth connection. Notebooks typically include Bluetooth, but you might need to buy a Bluetooth adapter to connect to a desktop PC.

One popular example of RF technology is Logitech’s Unifying protocol, which operates at the 2.4GHz frequency and supports up to six Logitech wireless products. The Unifying adapter usually comes with Logitech mice (and keyboards), and you can connect that one Unifying receiver to a PC and then connect multiple compatible Logitech devices.

Wireless keyboards have their advantages, and they tend to be more expensive than wired keyboards. They’re an increasingly popular choice that is well worth your consideration. 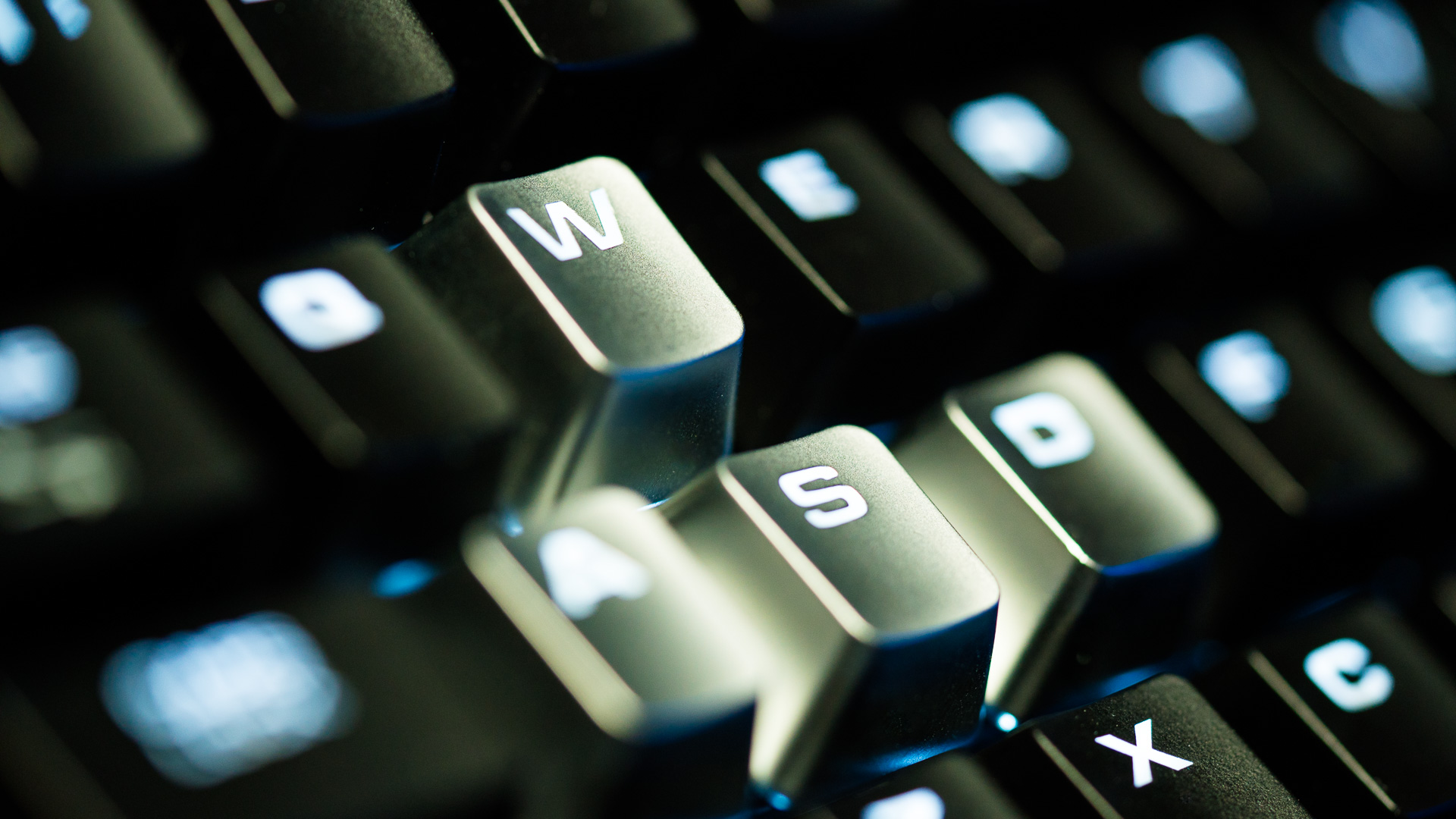 First, gaming keyboards tend to connect via USB cables. You can find wireless versions, but most gamers like to avoid even small latencies to ensure the fastest possible response in first person shooters (FPS) and other games with quick actions.

Second, gaming keyboards tend to use mechanical switches, primarily because of their quick response times and robust nature. Gaming involves mashing certain keys, including the W, A, S, and D keys, more often than others, and so the long-lasting nature of mechanical switches is a real plus.

Third, gaming keyboards often support lighting effects to highlight certain important keys, such as WASD, and to offer a more vibrant experience. RGB LED lighting systems usually provide these effects, and some can create millions of colors and a variety of effects.

Finally, gaming keyboards are often highly customizable. The best versions allow various key mappings for specific games, and they can be easily switched back and forth between titles. Some have special additional keys for gaming that you won’t find on standard keyboards. 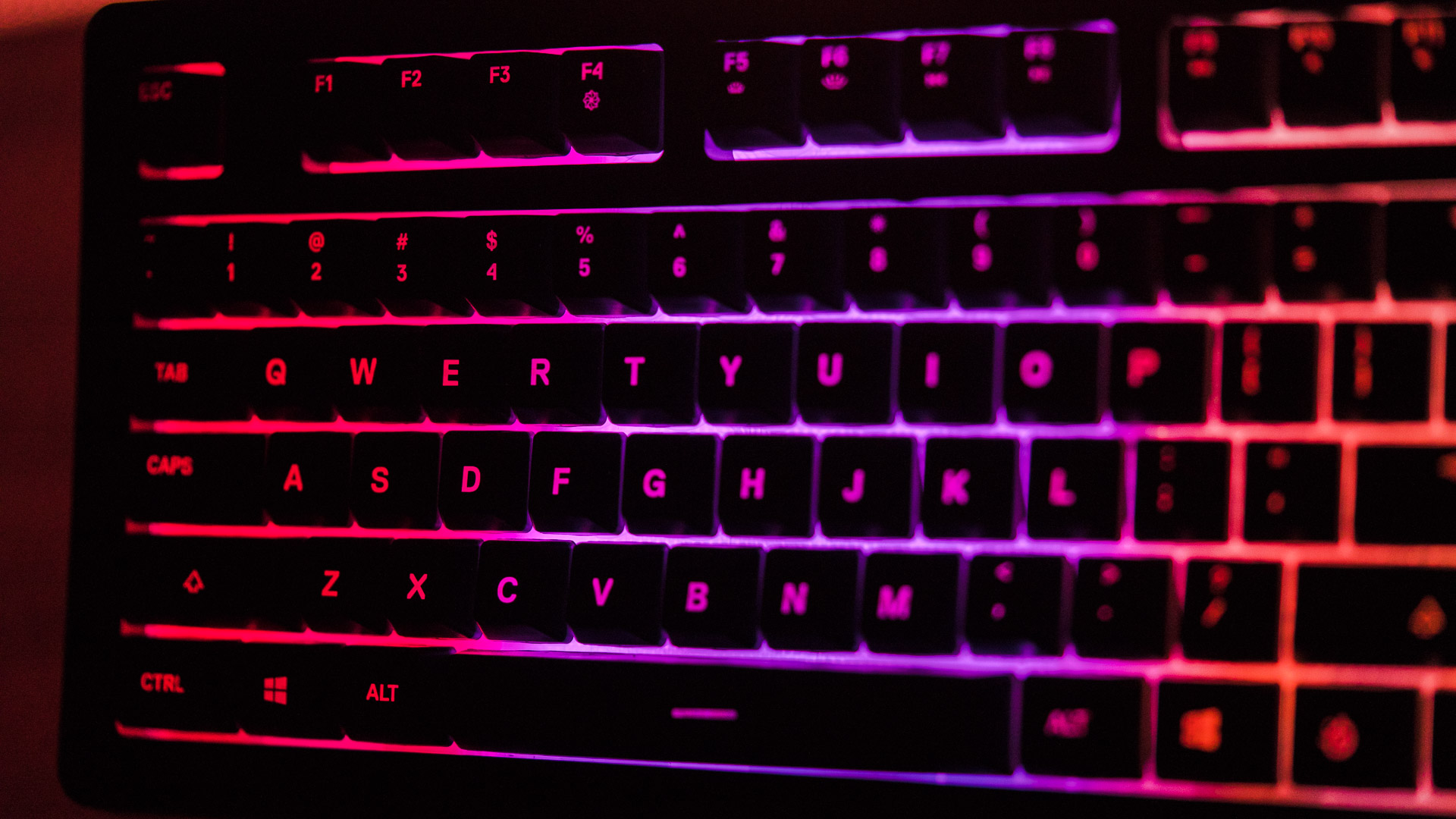 Buying a new keyboard can be a complicated affair, and your choice will greatly affect your computing experience. You’ll want to consider your needs carefully when choosing a keyboard, starting with the kind of switches that will best suit your typing style and needs. A good place to start is at Newegg’s dedicated keyboard section, where you can compare various keyboards side-by-side to find the perfect one for you.