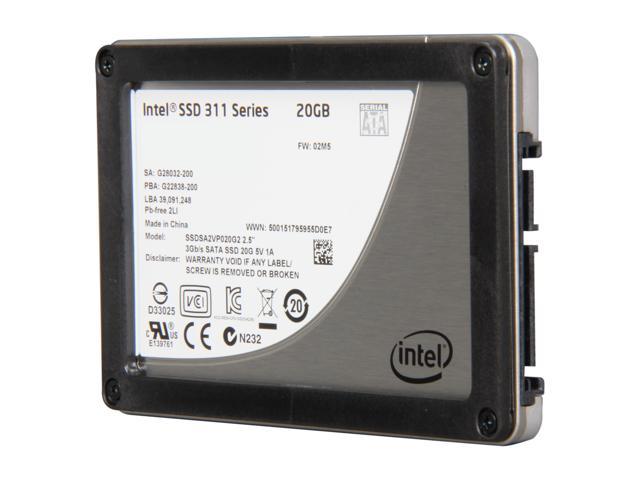 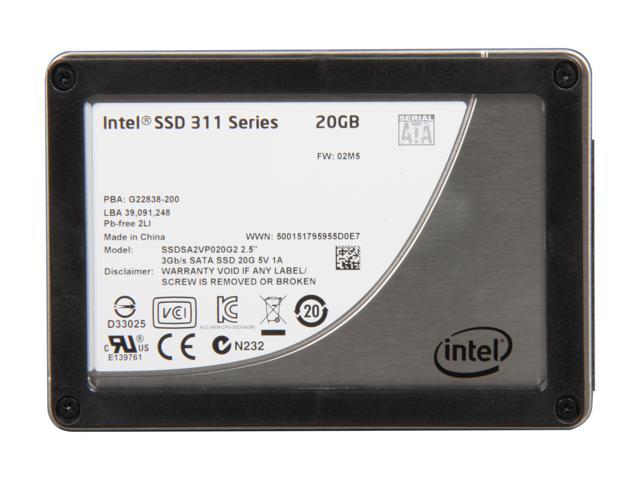 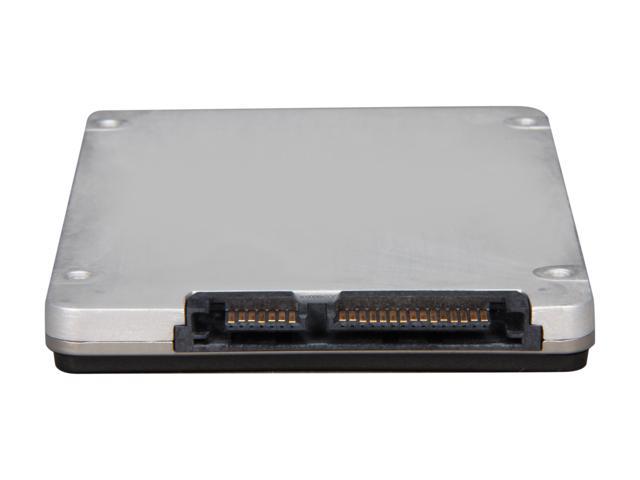 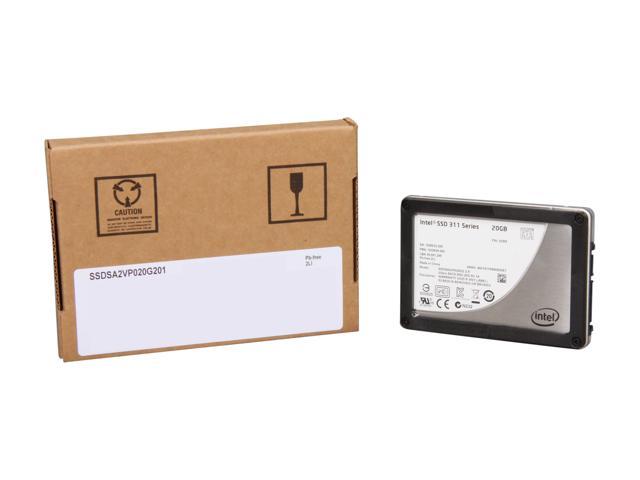 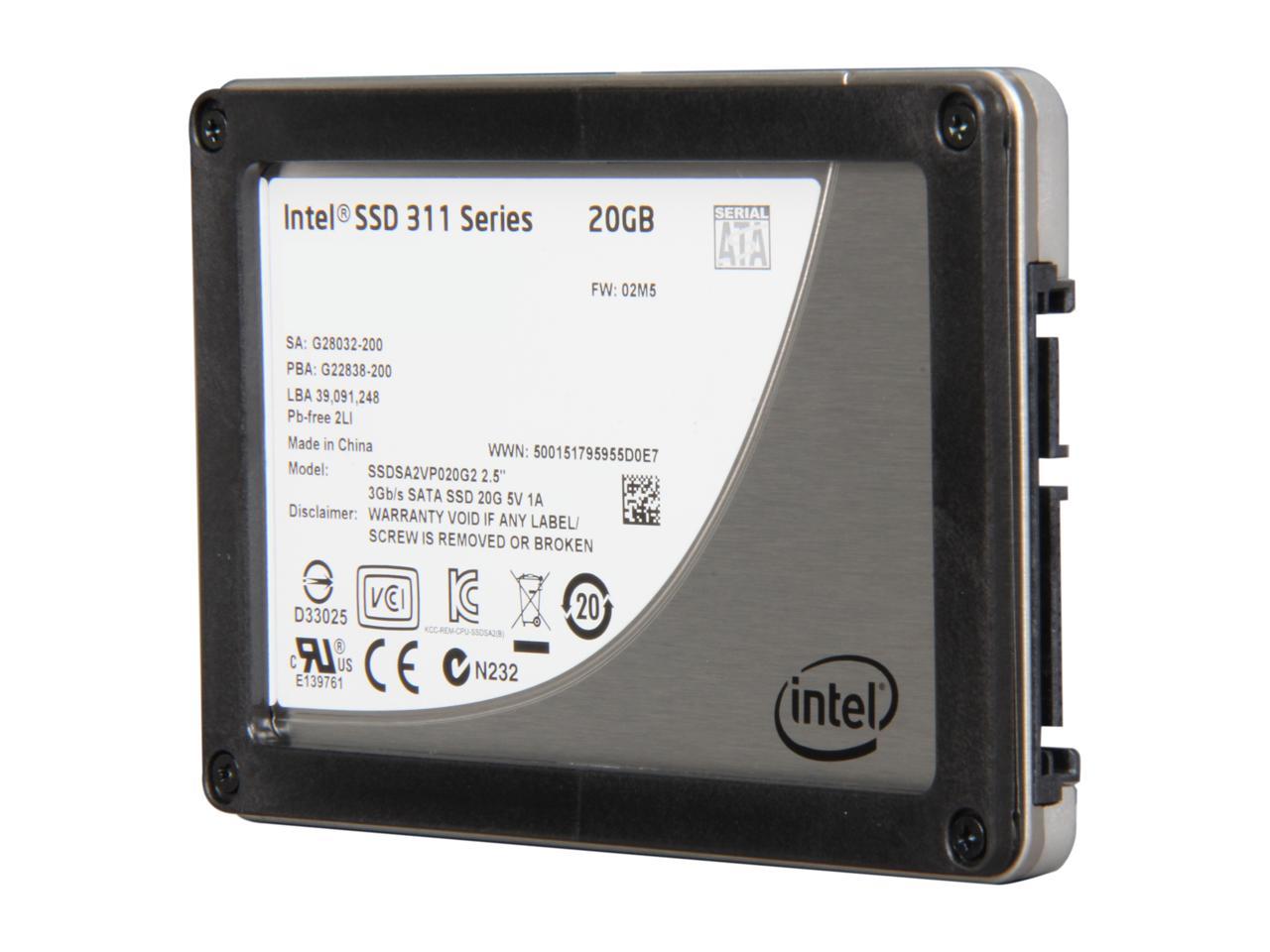 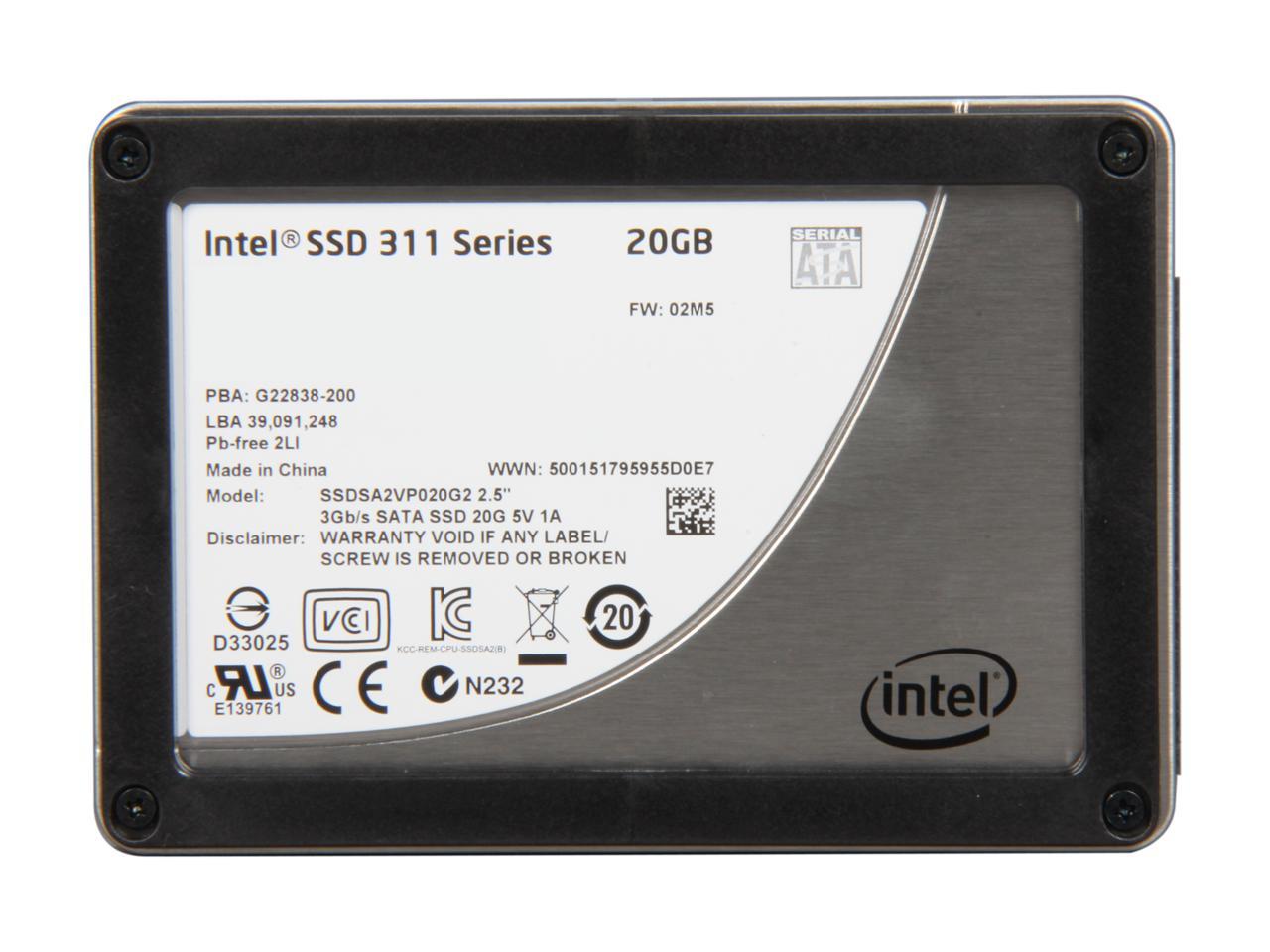 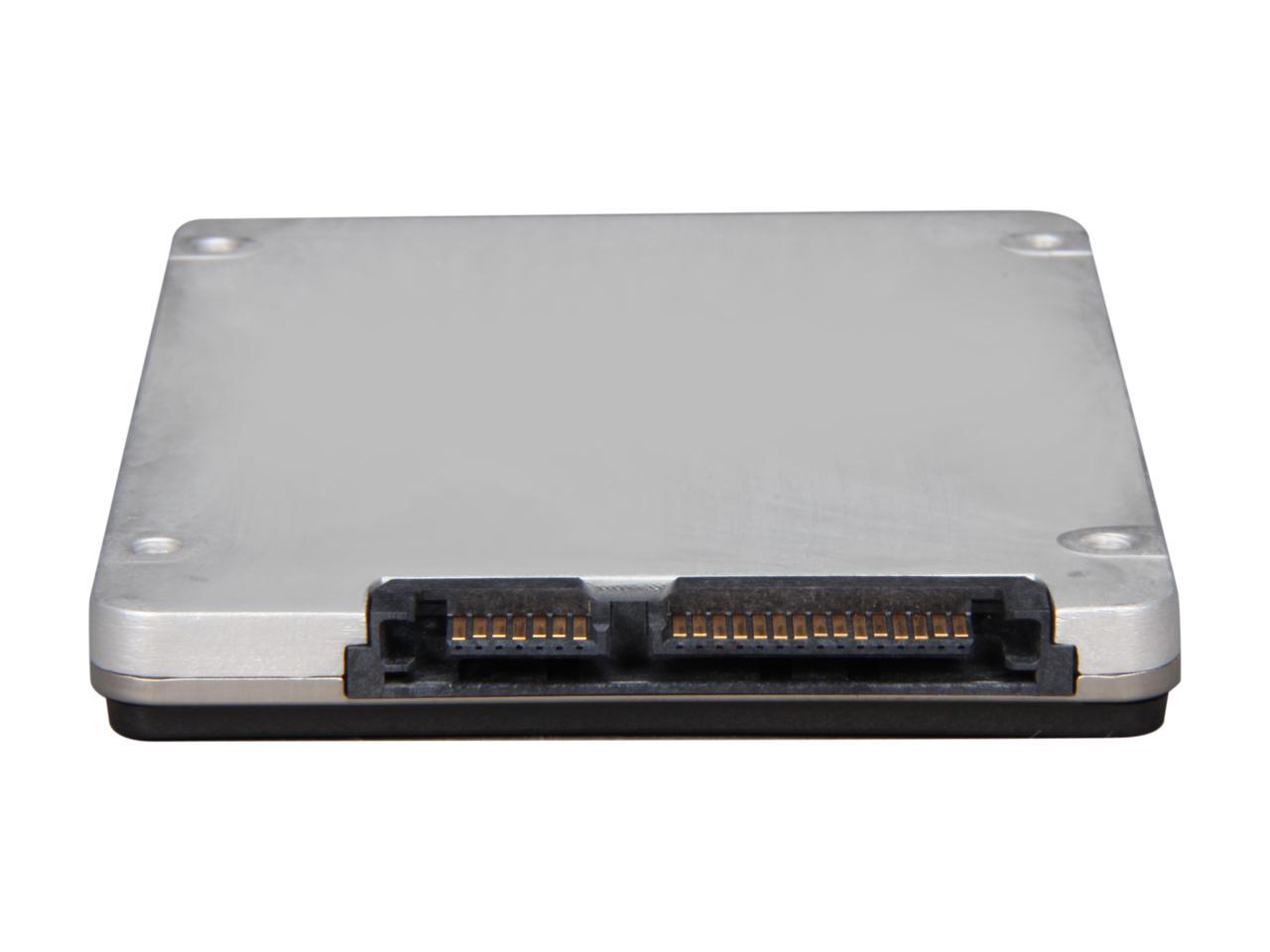 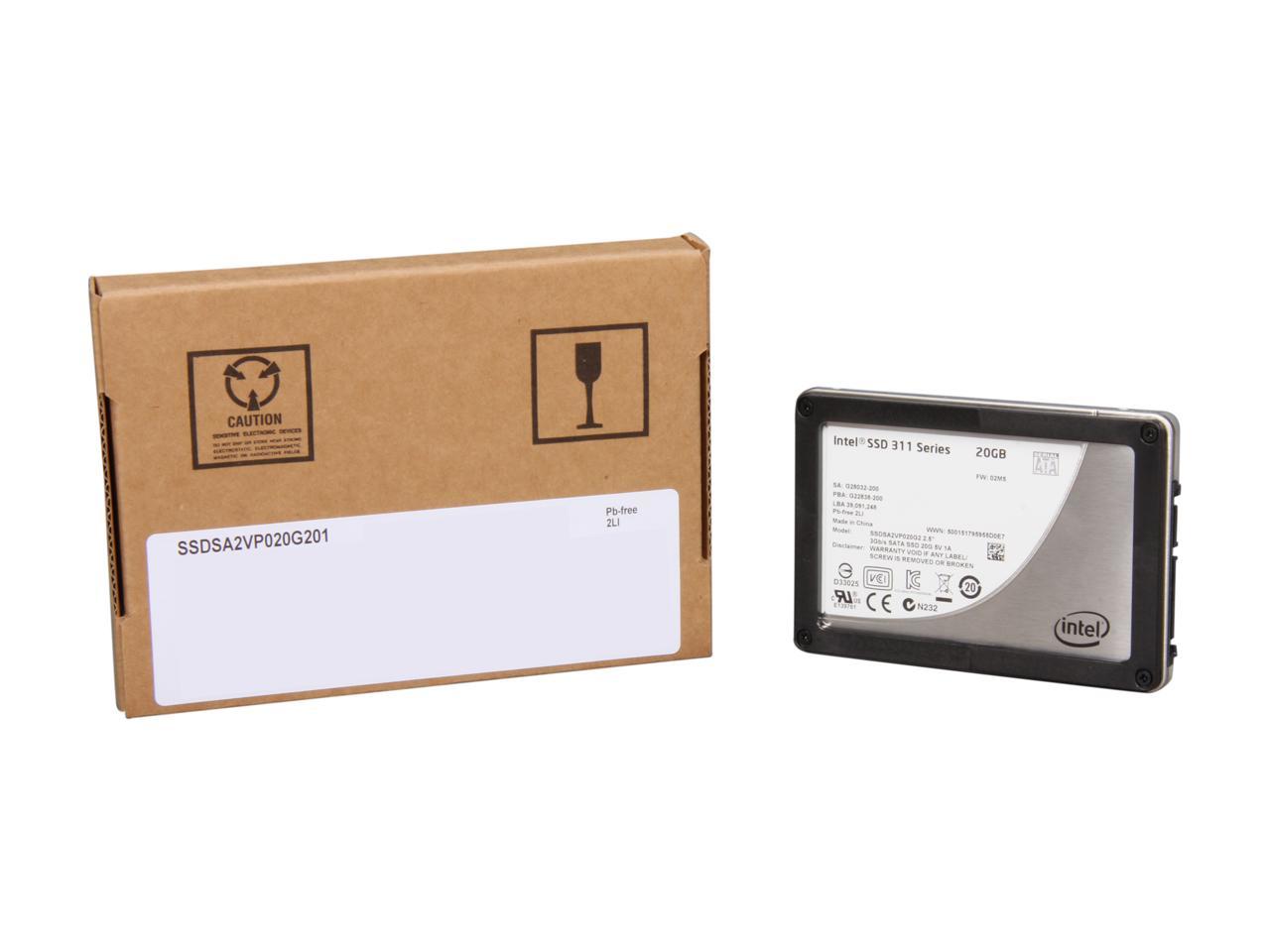 (11) Write a Review
OUT OF STOCK.
Overview
Specs
Reviews
Want Solid-State Drive (SSD)-like storage performance, with Hard Disk Drive (HDD) capacity, at a lower cost than a large SSD? Combine an Intel Solid-State Drive 311 Series, a HDD, and Intel Smart Response Technology for a simple way to accelerate storage performance. Intel Smart Response Technology—enabled by systems utilizing the Intel Z68 Express Chipset with Intel Rapid Storage Technology version 10.5 and second generation Intel Core processors—seamlessly combines responsiveness similar to a high-performance SSD with the capacity and low cost of a hard drive. The two technologies appear as a single C:\ driver letter that provides you with the familiar storage identifier.
The system automatically learns which files are accessed frequently and copies them from the HDD to the SSD. The next time you access these files, the system loads them from the fast SSD rather than the slower hard drive. When you request infrequently-used files, the system loads them from the hard drive when you need them. Systems boot fast, applications load fast, and the system feels snappy, like an SSD.

Learn more about the Intel SSDSA2VP020G201

Pros: I bought this to go with my 450GB WD Raptor Drive to run in SRT. You have to have RAID turned on in order to setup SRT, so don't forget to enable it before you install your OS. Mounted just fine in a 2.5in slot...

Cons: No issues. Price per GB is kinda high, but the memory type this unit has will be perfect for SRT.

Pros: Fast SLC memory so hopefully reliable and will last for a long time. I used this to speed up my in-law's hard drive performance utilizing Intel Smart Response Technology and this is what I observed. Their commonly used programs now open up instantly. So Word, IE, Firefox, etc now open right after clicking on them. The Windows start up time is also down to about 30 seconds, and I believe it was over a minute before. This is on "enhanced" setting. So the launch time for the programs went from 3 seconds to pretty much instantly. My Father in law's reaction: "So you saved me 3 seconds." That adds up over time and makes for a more enjoyable experience. Obviously he's saving time on the startup now too and anything other frequently used item.

Cons: Do NOT connect the SSD to the MB until the end of the set up process! So I didn't really pay very close attention to that step, which resulted in an extremely painful lesson. After setting up everything on the in-laws computer including updating virus programs, the os, and drivers for everything using slightly better than a dial up connection, I decided to turn on the last step of the process which is enabling acceleration on ISRT. I proceeded to restart the computer and was notified that "the boot drive is no longer found." I tried experimenting with the ISRT and Raid settings and could not recover 5 hours of set up that I had just done. This resulted in having to completely redo everything I had done. After some research, I figured out that the problem was that I had the SSD hooked up too early in the process. Once I disconnected it and then connected it later in the process, everything worked. So... this is more a CON for ISRT than it is for this drive.

Overall Review: The drive is fast and SLC is supposed to last for a very long time compared to MLC. It's definitely on the pricey side of GB per $ but your paying for the top end of speed and reliability. Intel Smart Response Technology (the reason most users are likely using this drive) should implement detection of your set up prior to enabling acceleration. It seems like an easy enough thing for Intel to add a warning that says part of your boot drive is already set up on the SSD that you are about to enable acceleration and that turning on ISRT will cause your computer to become inoperable. Granted, I should also read ALL instructions before enabling such technology and not second guess some of the steps. But this drive doesn't actually come with any instructions. So rather than complain about instructions, I'd rather complain about ISRT not putting safe guards into their software for this type of issue. ASRock z68 Extreme4 Intel 311 20gb Seagate Constellation ES 500GB Intel Core

Pros: Can see the differnce,I'm sure it will get even better

Overall Review: Hair pulling was going on for days thought it was my fault, then i went to the asus web page for my deluxe board and just like that, I over lapped the software fixed it back to raid, and it's all good now

Overall Review: Forgot something in my previous post. Remember to connect the SSD to one of the Intel SATA ports, NOT a Marvell port.

Pros: Using this for a ZIL (ZFS Intent log) drive. It's perfect for this since my cache size is only about half of the disk's capacity and it's a huge savings over the older 32GB Intel X25-E (that you can't even buy anymore).

Cons: Small size means they are sort of slow - <3.5k IOPS for random writes isn't any worse than the X25-E, but it won't win any awards. Luckily the ZIL doesn't need high write speed either since we top out around 100MB/s.

Overall Review: Development machine. Using as a boot drive for win XP on a Gigabyte P45. Will update to 6 of these on ich10R. Three in raid 0 for boot and three in raid 0 for data. Then a 2TB drive on the jmicron controller for backup.

Overall Review: I originally wanted a SCL base USB flash drive sold in Japan. However this will due. The Intel MLC 320 is fast but hay I finally got my SLC!

Pros: Stable. This SSD is not meant for speed, but for reliability. To this ends, it works wonderfully.

Cons: It is not fast by SSD standards. Also, it's tiney. I am not sure if you can even realistically install windows on it. For most people, this drive isn't for you.

Overall Review: I beat this thing up. Several reformats, a couple of OS installs, pulling down the linux kernel every other day. TRIM does need to be enabled, but it can take *some abuse. Also, if I could take a half egg I would. The case seems to be warping/oxidizing in a very odd way. I've never seen a device do this, but it seems unrelated to its functioning.