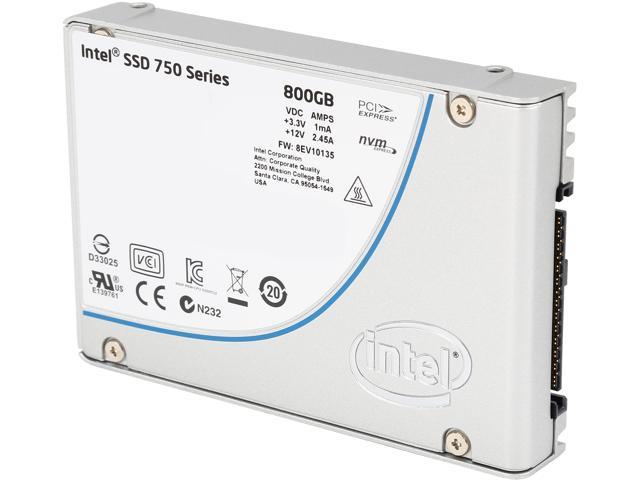 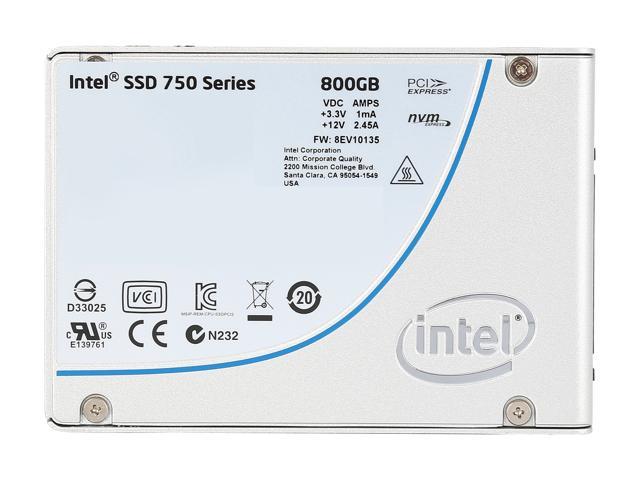 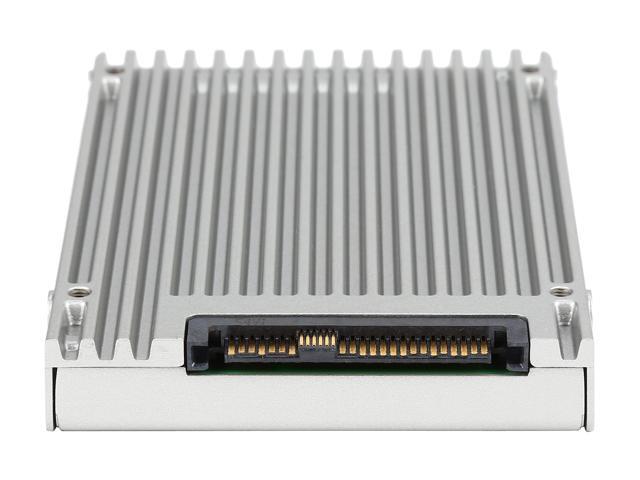 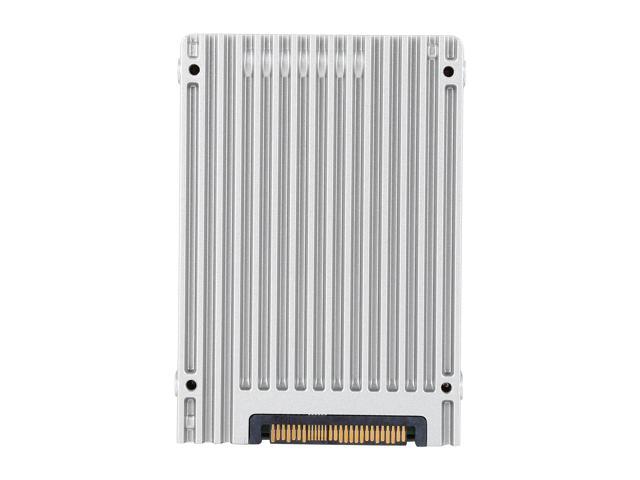 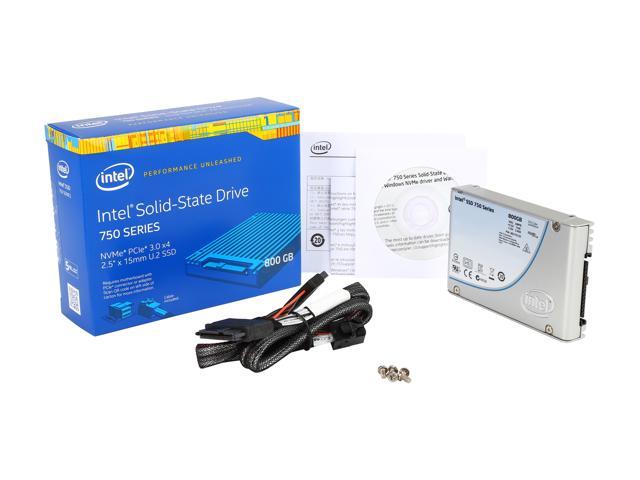 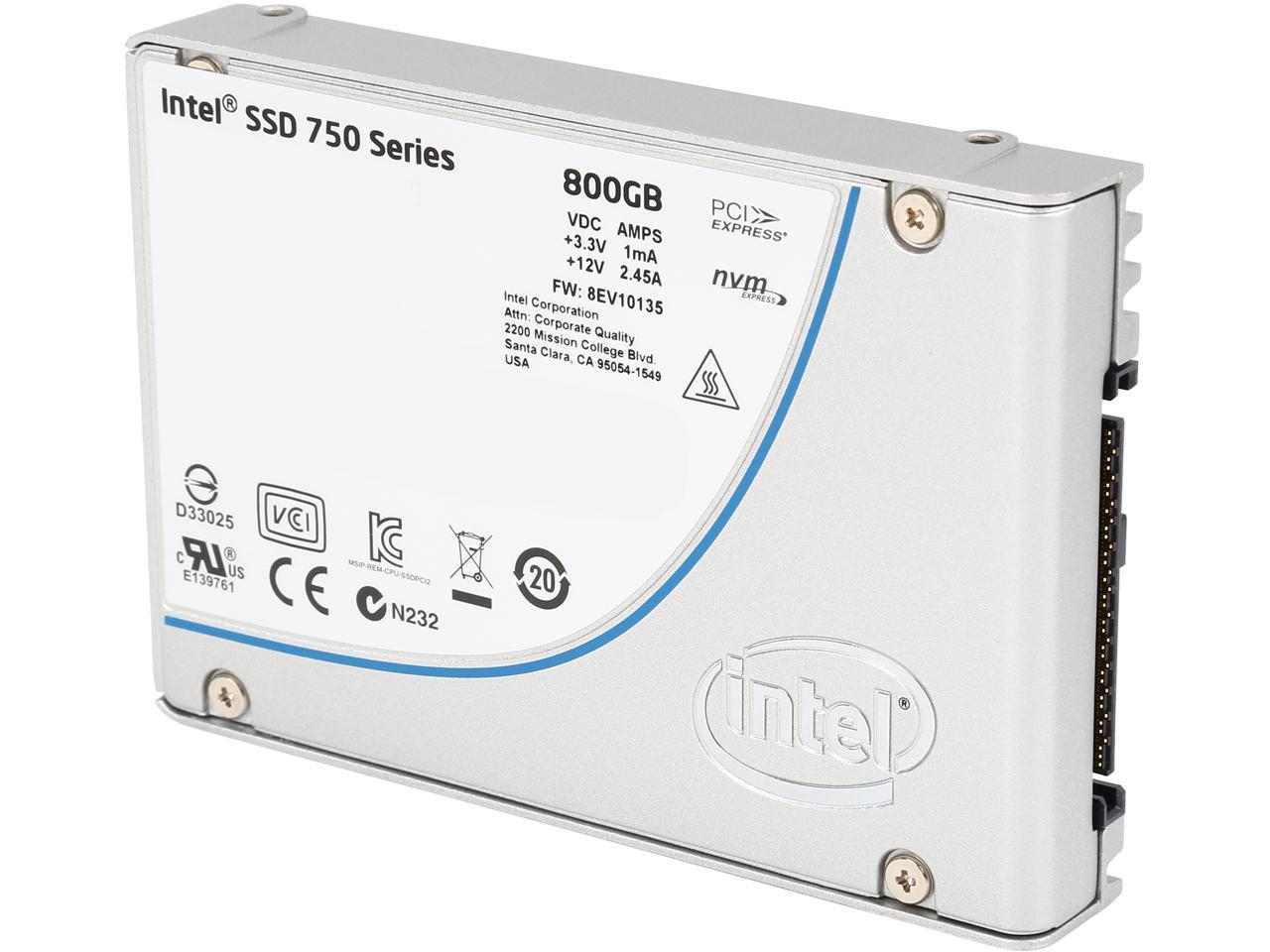 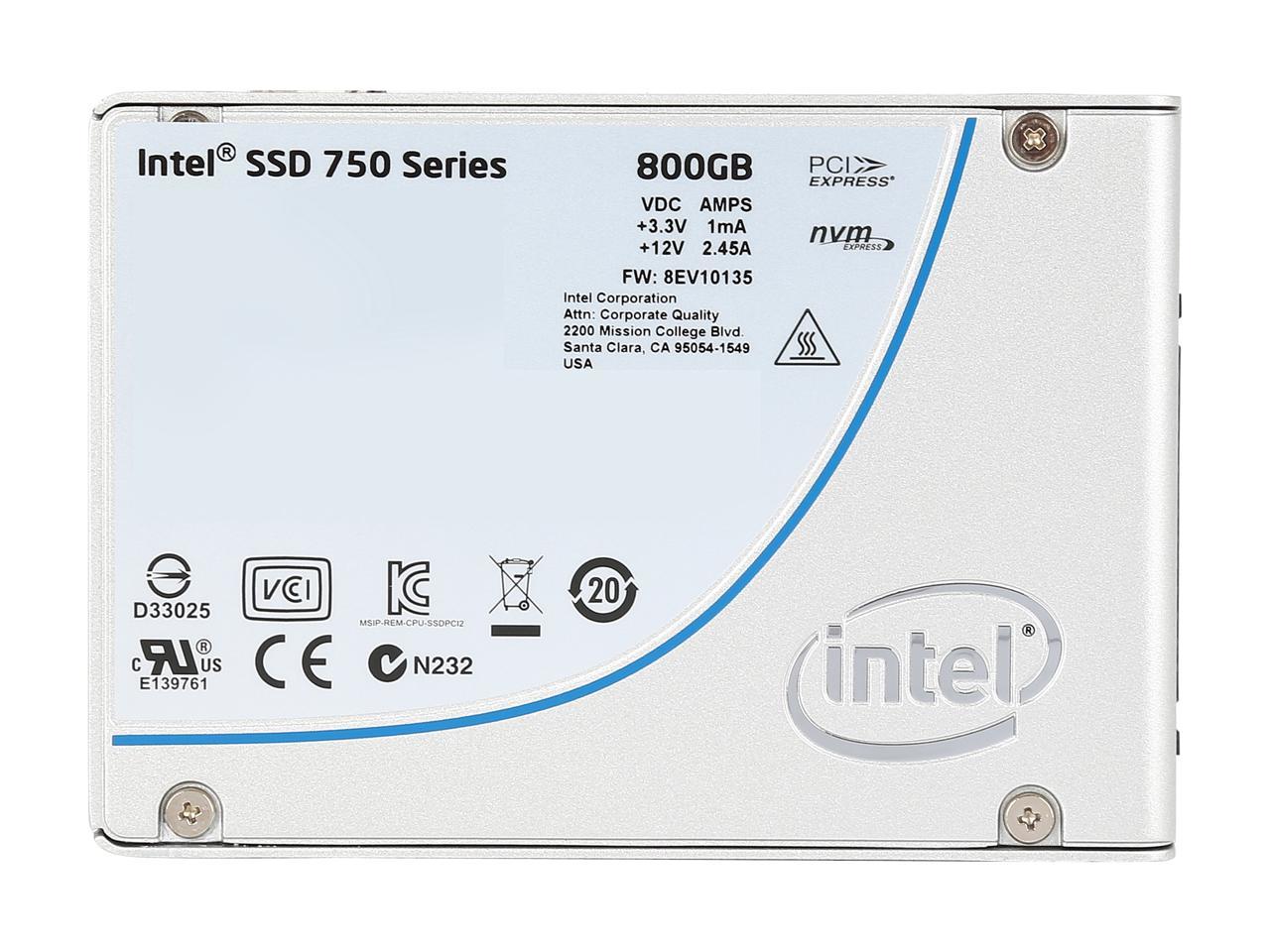 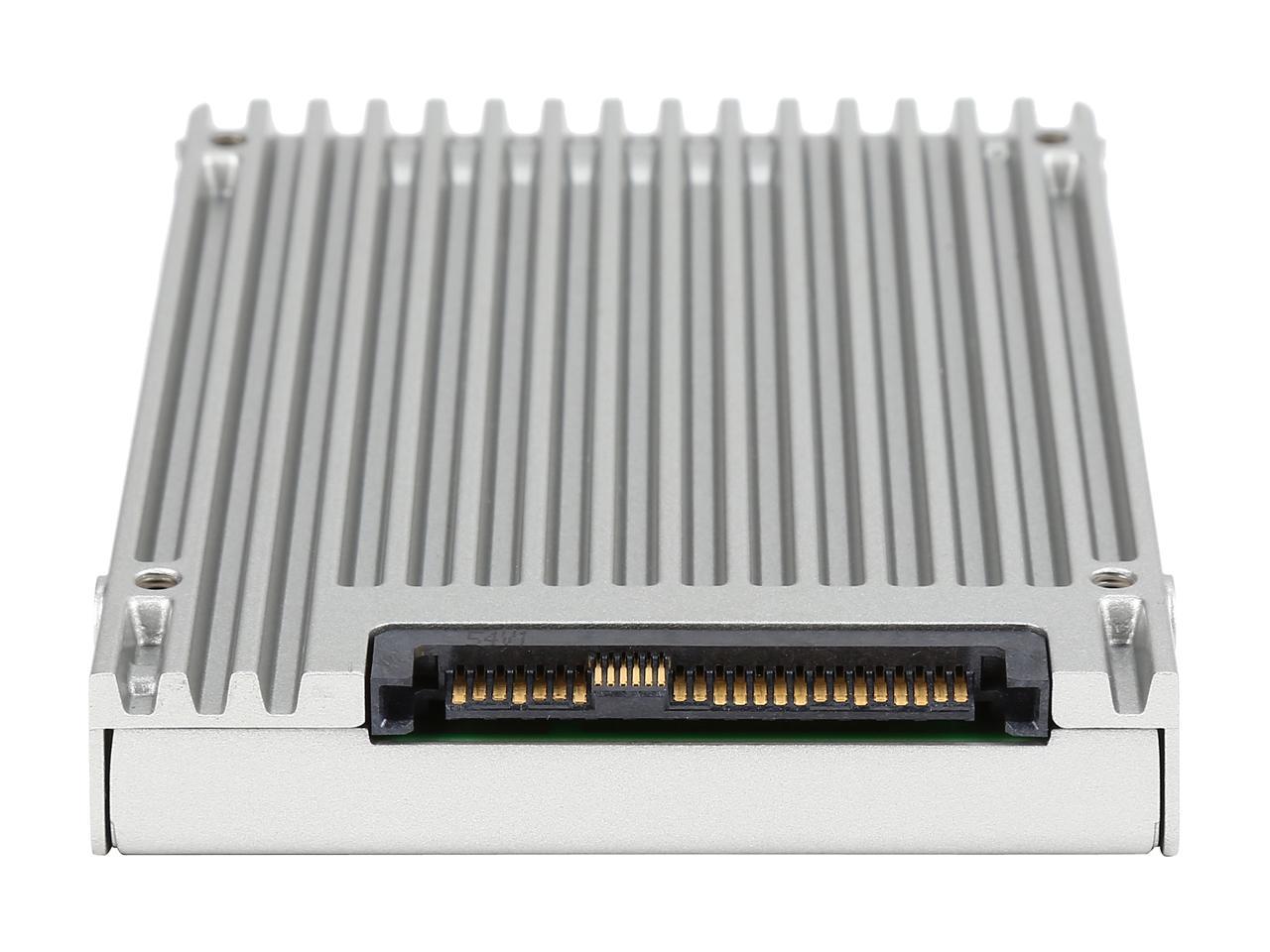 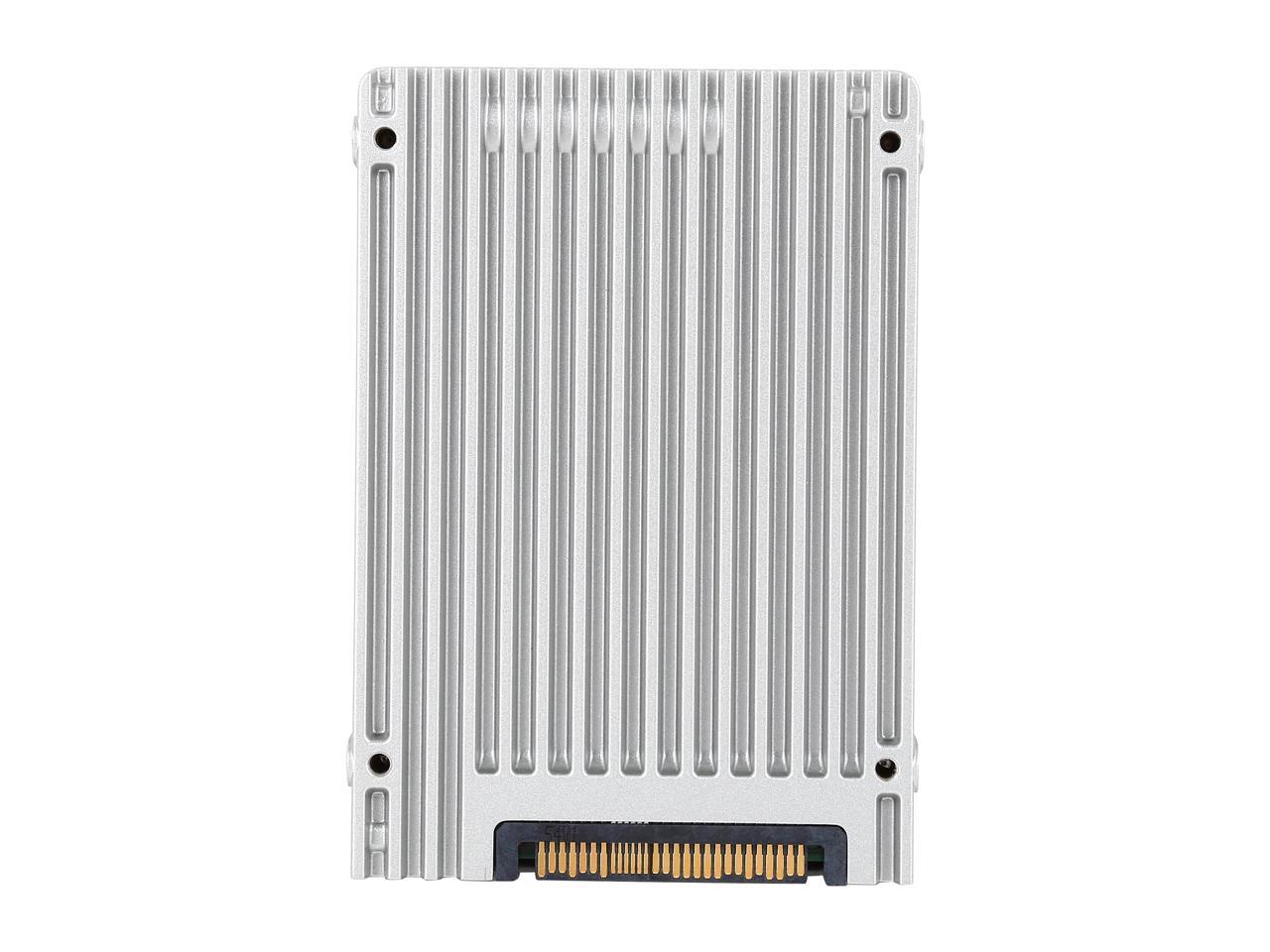 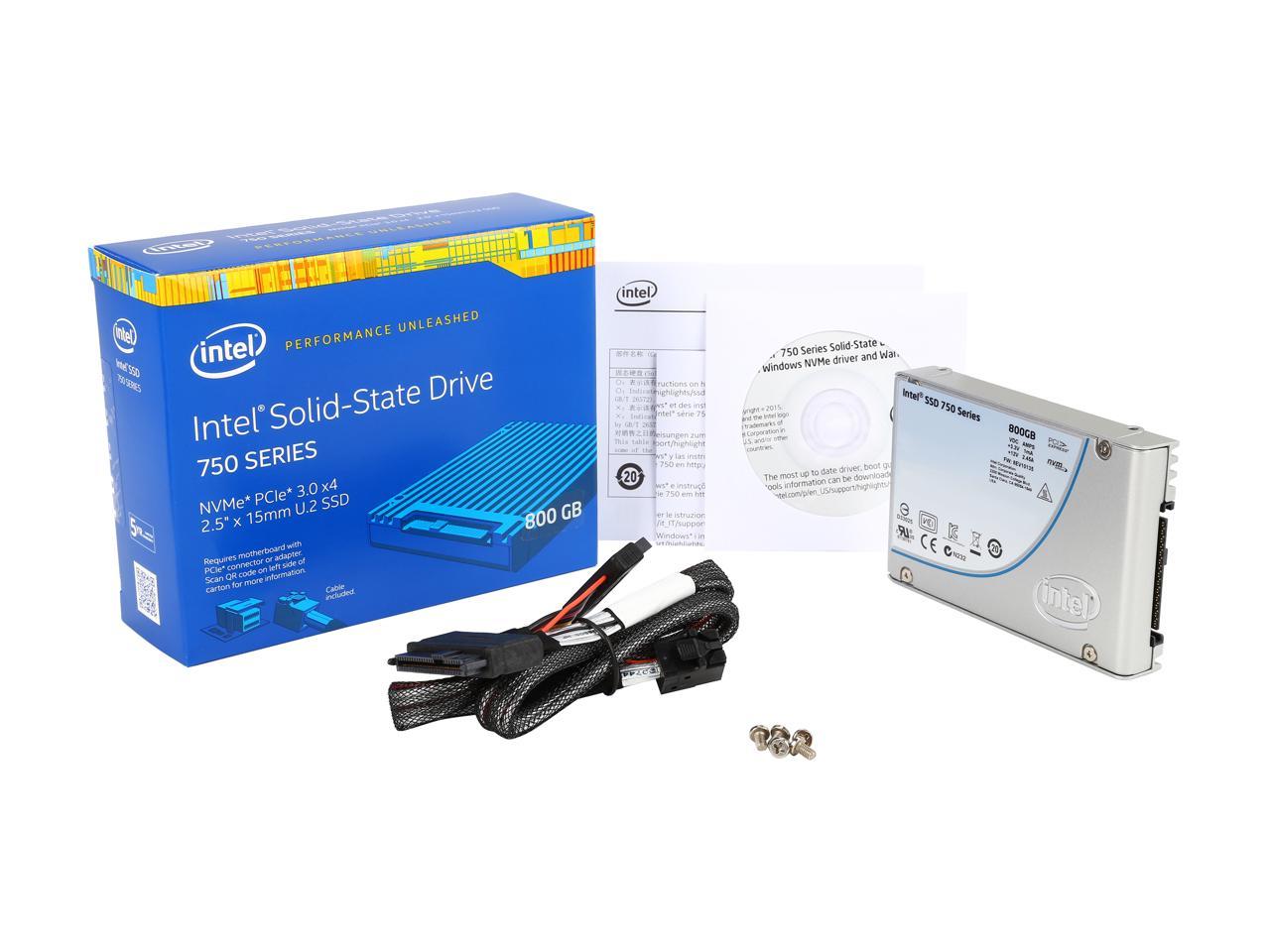 Experience the future of storage performance for desktop client and workstation users with the Intel® SSD 750 Series. The Intel SSD 750 Series delivers uncompromised performance by utilizing NVM Express* over four lanes of PCIe* 3.0.

With both Add-in Card and 2.5-inch form factors, the Intel SSD 750 Series eases migration from SATA to PCIe 3.0 without power or thermal limitations on performance. The SSD can now deliver the ultimate in performance in a variety of system form factors and configurations. Intel is leading the transition from SATA* to PCIe* with the Intel® SSD 750 Series targeted at PC Enthusiasts and Workstation users. PCIe represents the future of the computing storage interface offering vast improvements in raw throughput performance and latency reduction. Delivering a product with no compromises means no shortcuts. Rather than taking the easy path and accept the burden of an AHCI* interface with commands that were designed with spinning media in mind. Intel chose the high performance solution, NVMe*. Intel has broken down the barriers to bring NVMe storage to the client by enabling the ecosystem for a bootable, easy to use, plug-&-play solution. This means SSDs and platforms that just work together, products you can trust. Delivering the full performance potential offered with four lanes of PCIe 3.0 today requires real horsepower without compromise on form factor. This means delivering a product with the thermal dissipation capabilities that allow the controller and the media to really stretch their legs, as well as providing the required space for the storage media to accommodate large capacities. The Intel® SSD 750 Series makes no compromises. It simply delivers raw storage performance and capacity for customers that only accept the best!

Check out the spec and get the right storage for yourself!

1 Tests document performance of components on a particular test, in specific systems. Differences in hardware, software, or configuration will affect actual performance. Consult other sources of information to evaluate performance as you consider your purchase.
2 Performance measured by Intel using IOMeter* with 128 KB (131,072 bytes) of transfer size with queue depth 32. Power mode set at 25 W.
3 Performance measured by Intel using IOMeter* 1.1.0 with queue depth 32. Measurements are performed on 8 GB of Logical Block Address (LBA) range on a full SSD.

Learn more about the Intel SSDPE2MW800G4X1

Pros: Fastest consumer SSD currently on the market (to my knowledge) High capacity, especially for SSD. Am able to use as boot device with X79 chipset. (not officially supported, see other thoughts)

Cons: Price, although I got a sweet black friday deal. Can be tricky to boot if not familiar with MBR/UEFI. (see other thoughts)

Overall Review: I read a lot of conflicting information about this drive and boot compatibility with my system. I have a Asus Sabertooth X79 motherboard. According to Intel, only Z97 and X99 chipsets are support booting to NVMe drives. This almost made me not purchase this drive. However, I did some searching and found users on different forums claiming they had gotten the drive to boot using X79 boards, and I even found two posts claiming success with exact board I own, using the latest mid-2014 bios update. So, I took a chance, updated my bios, and ordered the drive. Once I received the drive, I struggled to get the drive to boot. I could see the drive listed in my BIOS, and the Windows 10 installer could see it, partition it, and format it. I could also boot to another drive, and access the new drive in Windows. However, when I attempted installing Windows 10 on the drive, after the first reboot i would get a blue screen with a 0xc000000e error code. I tried all of the classic startup fixes, but nothing would work. However, I refused to give up, so I did some more research and found the solution. In short, I had to recreate my Windows 10 flash drive using Rufus, and select "GPT partition scheme for UEFI computer." The problem was my bios supports UEFI GPT and legacy MBR boot devices, but the Intel 750 PCIe will only boot with UEFI GPT. Most importantly, it seems the Windows 10 installer will configure the drive with a UEFI GPT partition ONLY when the Windows 10 flash drive itself is booted using UEFI GPT! The reason I could not get the Intel 750 to boot initially is that the Windows installer was partitioning the drive with MBR, which will not work with this drive. I cannot guarantee success with every X79 board, but I can vouch for the Asus Sabertooth X79, and since every Asus X79 board shares the same bios, I would imagine other X79 boards from Asus will also work. However, I would check the motherboard manual and make sure you have an available PCIe 3.0 x4, x8, or x16 slot.

Pros: Really fast, easy to install, Plugged in and recognized right away by the Asus Sabertooth X99 with Bios 1901.

Cons: I haven`t found any yet

Overall Review: When installing be sure to install the card into a PCIe 3.0 slot to get the full speed. I have a Sabertooth X99 board and I didn`t realize that the PCIe x4 and X1 slots were PCIe 2.0 slots until I ran a speed test and saw the speeds were slower than my old SSD so I had to move the card to the PCIe 3.0 slot and it worked perfectly.

Cons: I got this drive without doing enough research I guess, but it turned out good. I had got this to be the main boot drive in my system with EVGA Classified SR-2 motherboard without UEFI support built 2012. when I tried to make it work I quickly realized that you need UEFI support to be able to boot from NVME PCI drives. So being stuck with an awesome drive I can't use for what I need, I kept researching. 3 days in and after reading over 100 times that it was impossible to boot from no UEFI system.....

Overall Review: I MADE IT WORK using "tianocore uefi duet" loader made for Hackintosh. I was able to clone my old windows 10 64bit system drive to the new Intel 750 and boot for it. IMPOSSIBLE is NOTHING!! Two pages helped most with this. I'm not sure if I can drop links here, so google "bios2uefi" from rodsbooks and google this one with quotes "Boot an NVME SSD from a Legacy BIOS" from mrlithium's blog. Good Luck!!

Pros: Fast, and when I say fast, I'm talking Superman flying around the world and going back in time fast. Breaking SSD benchmark software. In some cases, 6 times as fast as Raid-0 Samsung SSD's. Fairly easy to setup. Installed pre-drivers on disk for OS install. Once OS (Win 10) installed, installed NVMe drivers on disk. Using as boot drive, no issues.

Cons: Expensive, though this revision is much, much cheaper.

Overall Review: Buy, do not hesitate.

Pros: Easy setup large and very responsive. Warm boots are quick, since it went into a new build it is hard to say how much is due to the drive and how much is the overall new system. That said it is very responsive my old system had 850 evo ssd on sata2 and there was some delay jumping into my folders. now when I am searching through my folders the slowest part is probably my ability to click to the next location.

Cons: - expensive - minor annoyance : drive is thicker then standard SSD so I could not use the SSD tool less mounts in my case - I have noticed on multiple occasions that the drive is not detected from a cold boot not sure if that is due to the m2 to u2 converter the drive or my Gigabyte z170x-gaming7 motherboard. Sense the drive is not detected the os is not found do a reboot and it comes up without issue. I am hoping this is a software issue that will be resolved soon. That said I rarely power down so it is not a big issue and when I do the warm boot is so fast that even with the extra step it is faster then my old system **Update 01/11/2016** I checked today and Gigabyte has released an updated BIOS for my board. After running the update it appears that my cold boot problem has been resolved. The problem was just part of the pain on being an early adopter.

Overall Review: -If I had to do it over again I would probably buy it again. I thought about the Samsung 951 but it only went to 512gb and it was more cost effective to buy one of these as opposed to 2 951 then put them in RAID plus it would have eliminated both m2 slots. - I wish they were thinner as is to big for tooless SSD slots and to small for tooless 3.5 slots.

Cons: Eats 4 PCIe lanes Most systems will NOT be able to boot an OS from this drive, Pretty sure you need a modern Intel chipset (z170a has no problems at all) Errors from sleep states, not a big deal, just don't use sleep functions.

Pros: -Easy to install, installed PCI-express x4 slot (Mobo has 3 PCIe slots), top slot is 16x for my 980 and then a 8x which is for SLI GPUs and last one is x4. This works out perfect to space out my GPU from this NVMe SSD. Installed windows 8.1 fresh with no issues.

Overall Review: Had to update/flash MOBO BIOS to have the sleep function work correctly. It would go to sleep but restart as soon as it woke. MOBO is GA-Z170XP-SLI had to Flash BIOS to version F6e and then it worked as designed!

Pros: I have 4 of these in a UP Xeon E5 v4 10-core system, getting about 8GB/s combined bandwidth in SQL Server table scans. I believe the 750 has a 16-channel controller, which would be good for server applications, because there are more NAND chips and internal die for better IOPS are high queue depth.

Cons: I don't think the price of the 750 will come down because they are made with older parts. The Intel datasheet is vague.

Overall Review: The newer Samsung NVMe SSD is rated for over 3GB/s each, but may be an 8-channel controller.