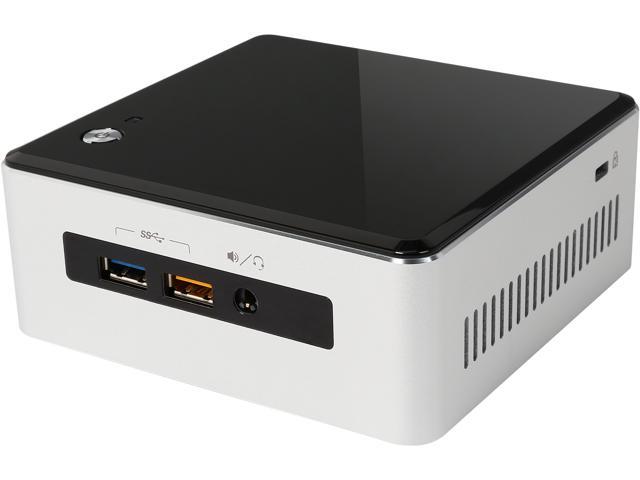 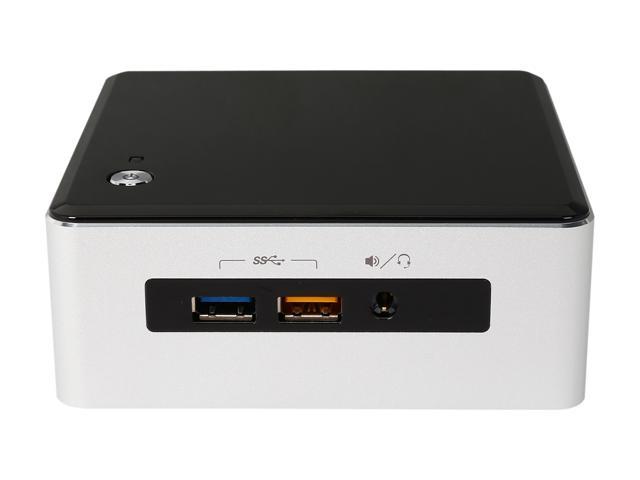 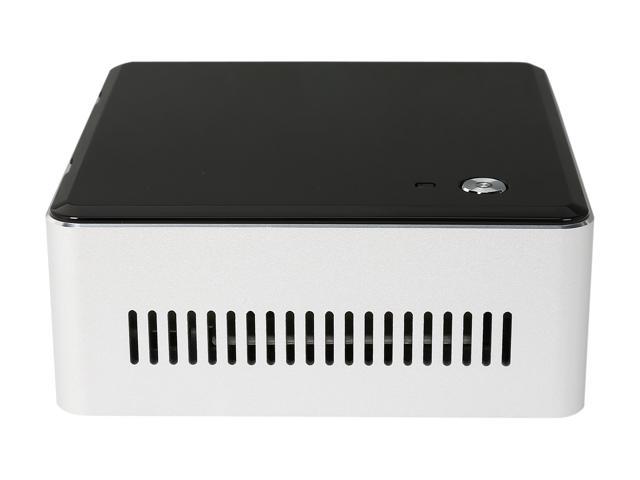 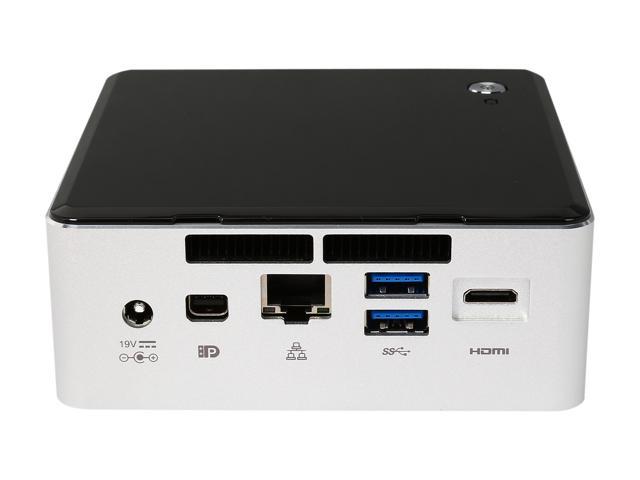 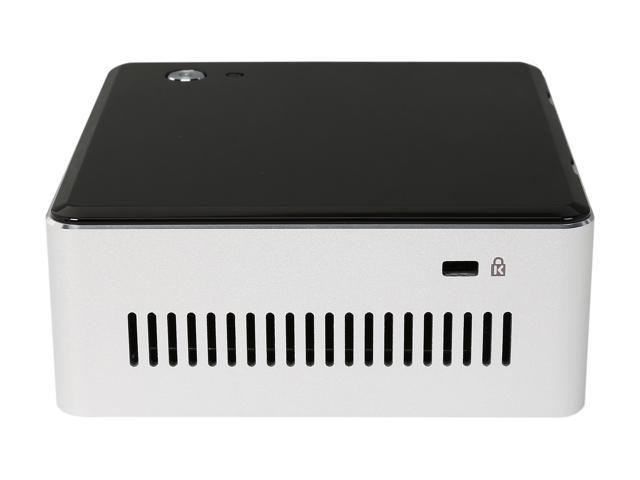 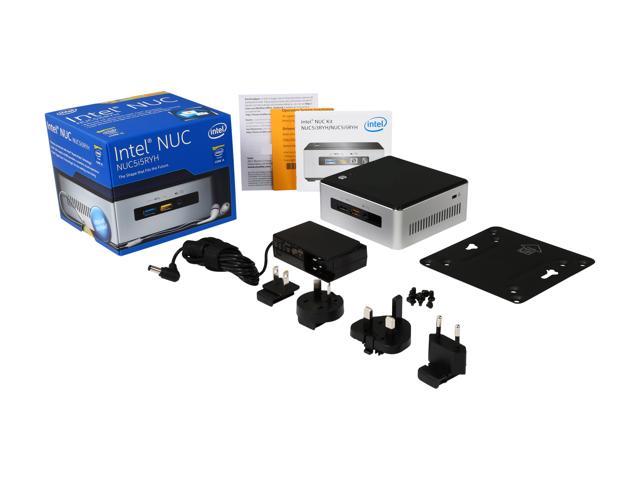 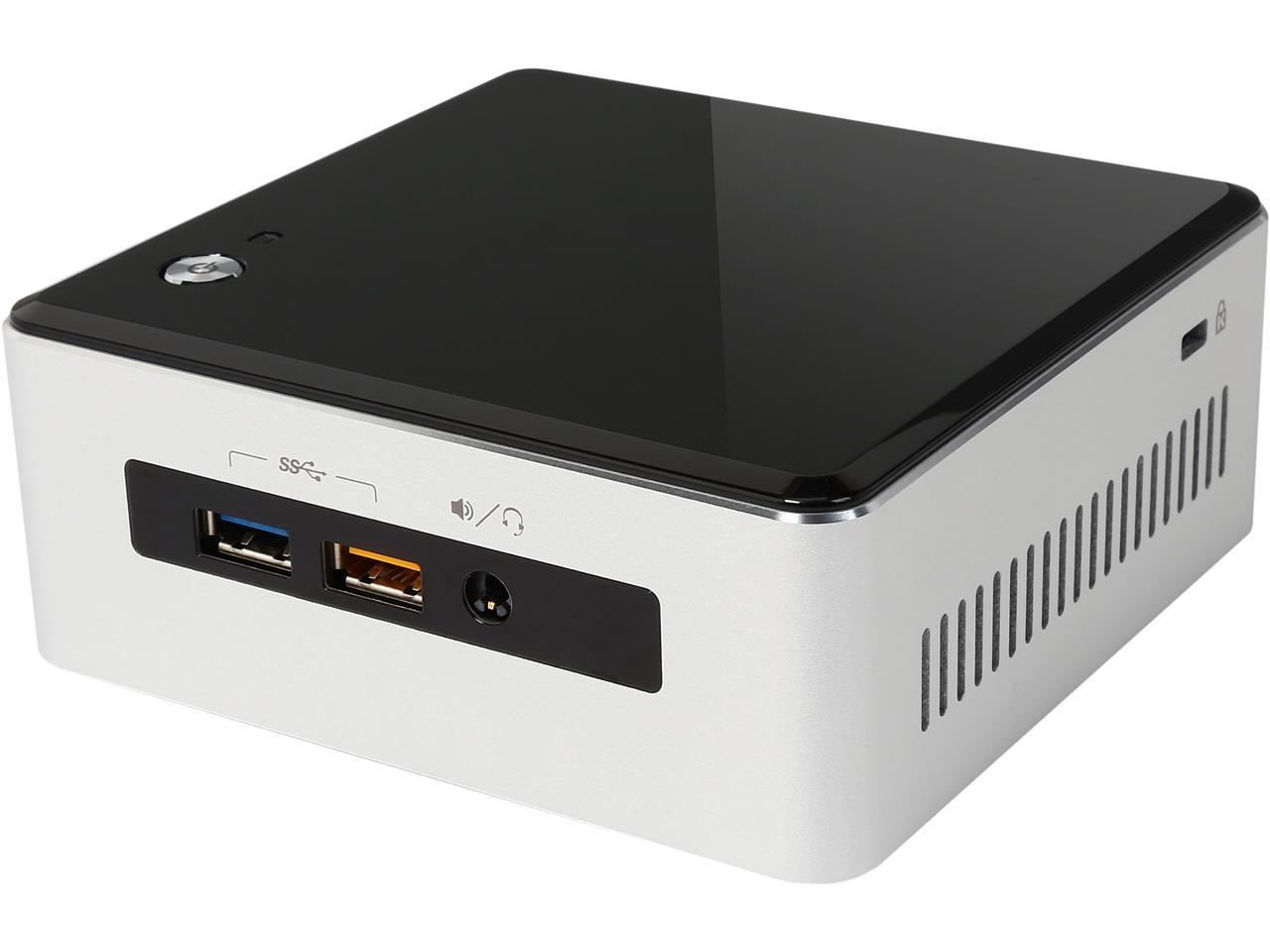 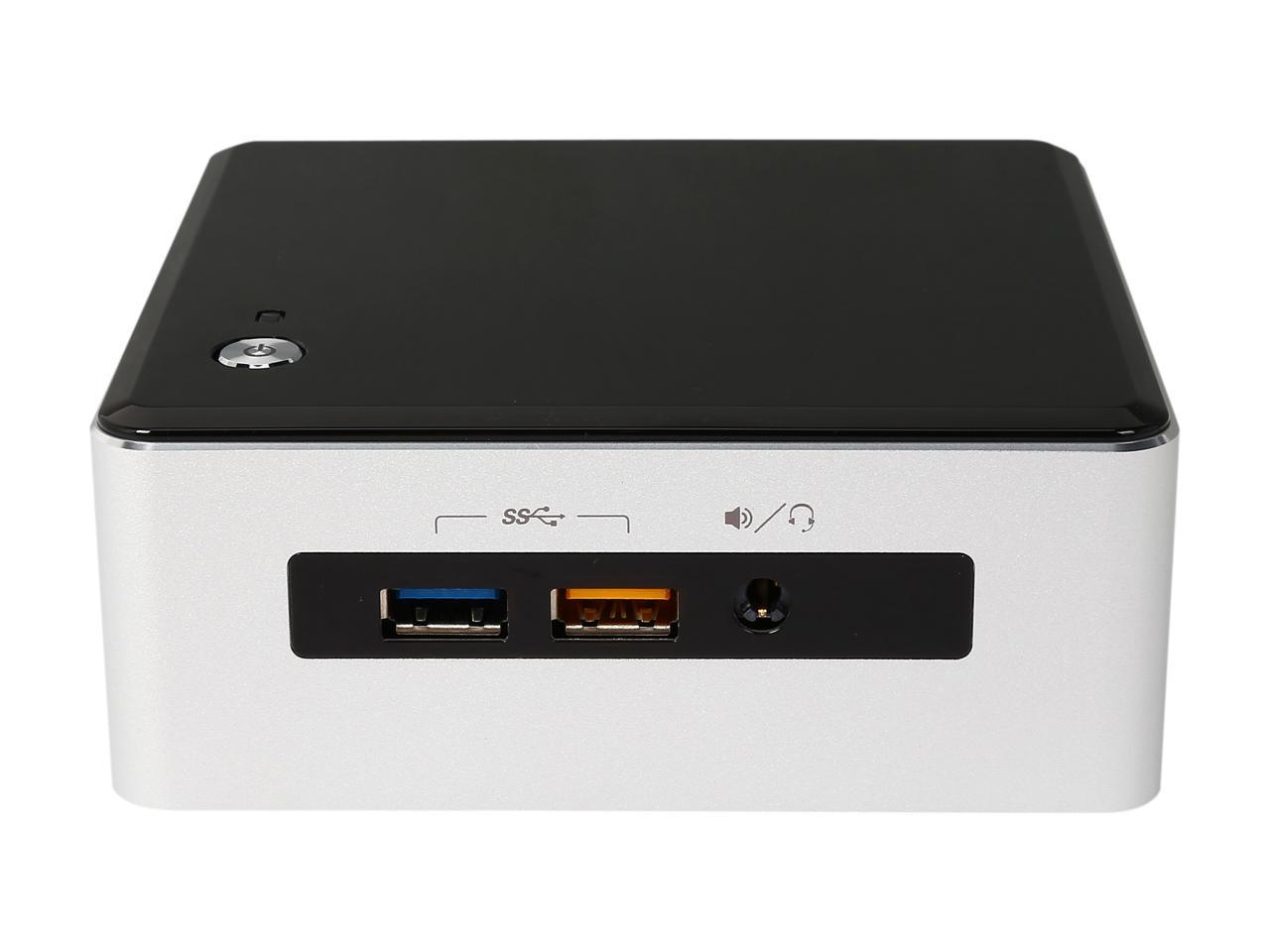 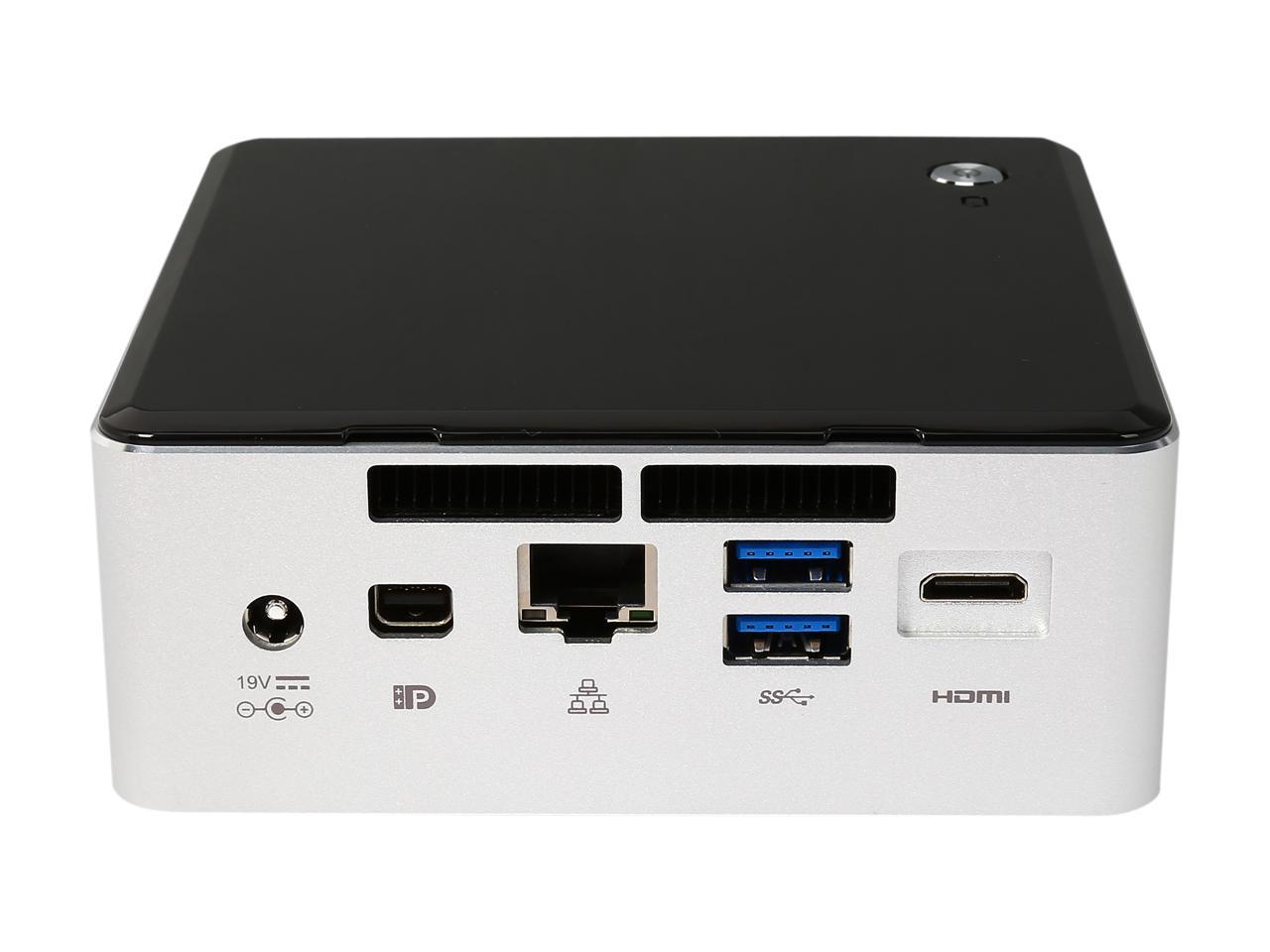 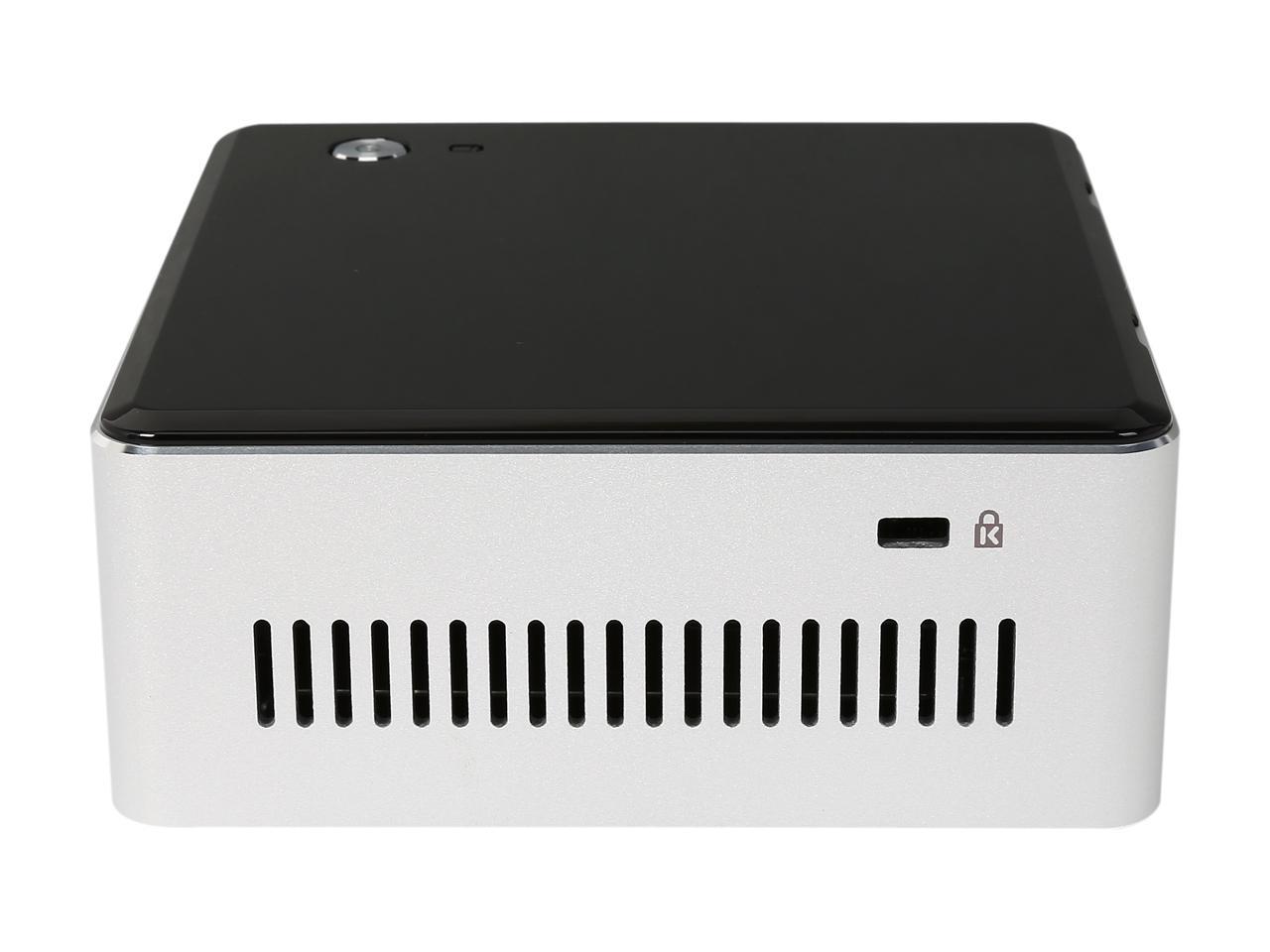 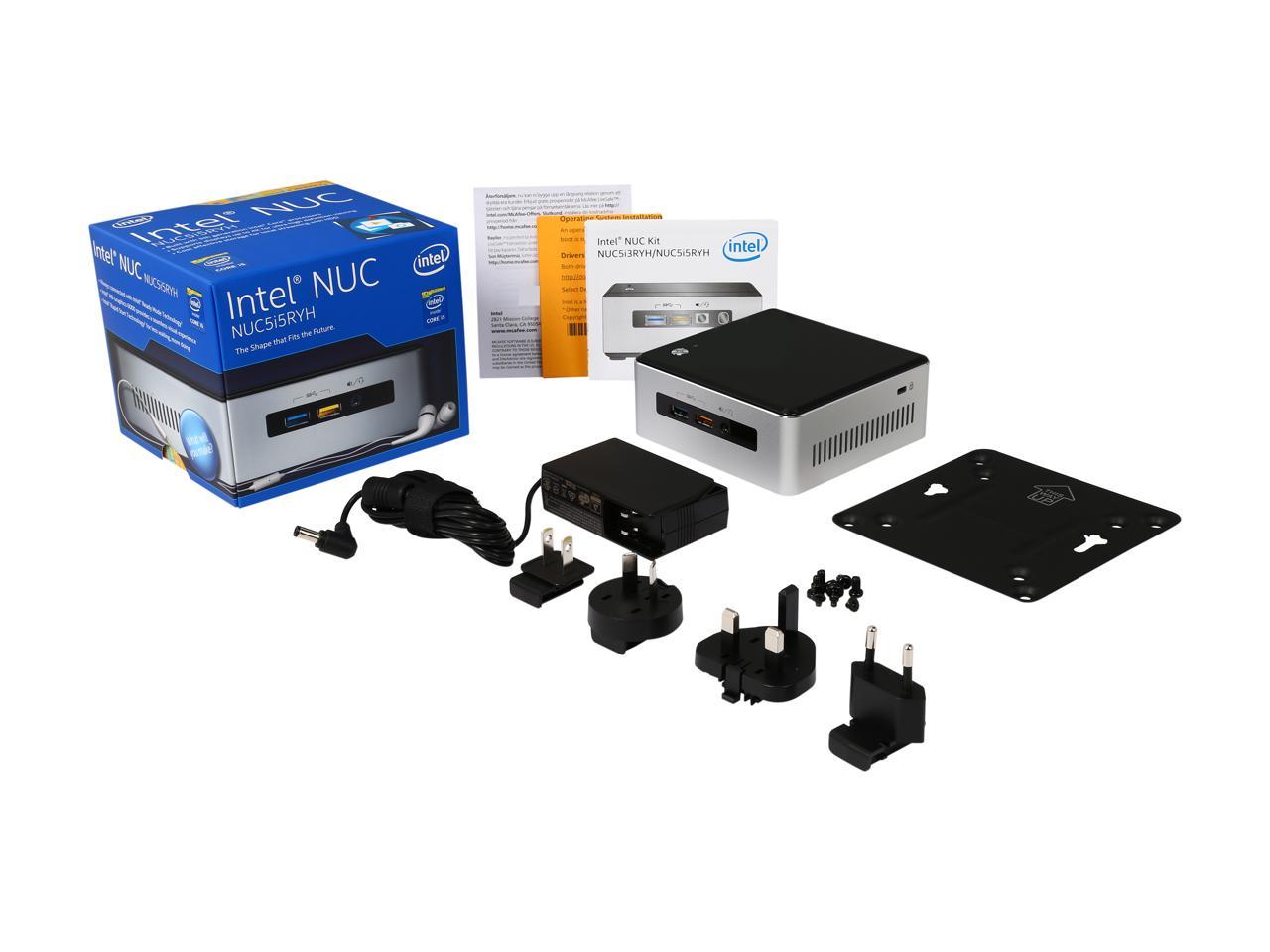 (21) Write a Review
See more "nuc i5"
OUT OF STOCK.
Overview
Specs
Reviews

Learn more about the Intel BOXNUC5i5RYH

Pros: installed 16gb corsair vengeance ram (1600 mhz), samsung m.2 ssd and a 2tb spinpoint hard drive (for dvr storage). It has been running great, in fact i got it to run Titanfall -on low of course- but definately playable (won a few rounds too). it workes great as a media center DVR, and plays all hd video ive thrown at it beautifully. Intel's broadwell platform really shines.

Pros: Small form factor Quiet Lots of ports Haven't had any trouble with the mini hdmi as many have Easy to open and work with

Cons: Horrible power supply, they have a clip where you pick different plug for your country, but it doesn't make a good connection and will die if you move the adapter or will just not power on. (Ordering some 3rd party adapters which will hopefully fix the issue) Out of 3 I ordered, I had one with a bad ram slot where it would not even post (Waiting for Intel support to replace)

Overall Review: I would give this 5 stars if it wasn't for the power supplies on these things, I can forgive a defect here or there, but this is just bad design.

Pros: Very small. Extremely quiet. Low power and low heat. Fits both a M.2 SSD as well as a laptop drive. Perfect for a Media Center. Nice visual BIOS. Has most of the ports that you could possibly need in something this size.

Cons: Installing Windows 8.1, none of the network drivers were recognized from the inbox install, thus none of the Windows updates were slipstreamed into the install. You need to download the network drivers separately on another computer on a USB stick, then install them on the NUC, then go through a massive Windows Update, then install all the other drivers needed. Also, it doesn't have an optical audio out (other than through HDMI), so i can't connect my receiver to it directly as I could previously, since it doesn't do HDMI passthrough.

Overall Review: For the person who was upset about the tagline, you might want to actually check your own math. On the box is says "4k movies in 4 inches square". It is in fact a 4 inch square box. It does not say 4 square inches.

Pros: Quiet, Runs all of my embedded development IDE's flawlessly (Microchip, TI, Freescale, Eclipse), flawless driver support (so far) from Ubuntu, supports dual 25" monitors and the Microsoft Sculpt keyboard & mouse, plenty fast for my needs (I do not give a darn about gaming). I configured it with a MIL-STD 128G SSD, a cheap 2.5" 750GB HDD for backup, and 16GB of 1600MHz RAM on it. If I ordered a NUC again, I'd buy the smaller version and skip the 2.5" HDD support. Ultra-stable. I've not had any reliability issues with this system. It is rarely turned off or suspended. It just works. It has over 4200 hours of runtime on it without a single glitch. Spend the extra money for good memory and a quality SSD.

Cons: My first NUC had an i3 CPU on it with a similar configuration to what I've described above. I could not get it to boot Linux off the internal SSD. I tried everything. It booted fine from USB. It appeared to be a BIOS problem. I returned it and exchanged it for the i5 version. I gave this NUC 4 stars instead of 5 because of the previous poor experience with the i3. Not that I'd really notice in daily use, but I'd put 64GB of memory on it if it supported it. It took two separate follow-on orders to finally get the correct video cables to support my two HDMI monitors. I wish Intel would have standardized on two identical monitor connections. I don't care which standard they use - just both the same would have reduced the open-box to fully-functional-system time.

Overall Review: After 32 years of embedded software development on Bill Gates' DOS/Windows systems with their seemingly built-in planned obsolescence, lack of tools to figure out why the performance always degrades over time, constant and time-consuming updates and virus checks, I finally was fed up enough to give Bill the boot. Moving to a Linux platform was a huge investment in time for me. I work on contract and of course am not paid to learn a new system. I went "all in" with this i5 NUC. Ubuntu Linux isn't for everyone, but it was completely worth the learning curve and not beyond a developer's skill level to get it running well. After living with it for 6 months I am In Love and would find it difficult to return to the house-of-cards virus-prone Windows environment.

Pros: It is very small in size which is what I am looking for and it has all the ports I need. Saves space compared to my mid-tower. It is of very good quality and very easy to set up

Pros: Runs quiet and fast. Fits in the palm of your hand, supports both HDMI and DisplayPort. Comes with Wi-Fi, Ethernet, Bluetooth built-in. Great as a high-powered HTPC, or office/school PC. All drivers installed automatically from Microsoft with install of Windows 10 (from a USB stick). Wall-wart A/C adapter is thin, doesn't take up too much space and comes with lots of international power adapters. Comes with VESA-compatible mounting hardware for mounting to the back of a monitor, but it looks great on its own on a desk or next to a TV.

Cons: Might not play nice with all SSD's. Had trouble with a SanDisk Z400s in the SATA slot, which had been bundled with NUC's by Newegg for a while. Tried two different combos from Newegg, both would simply lock up with the hard drive light lit solid, leaving only the mouse pointer operating on the desktop and nothing else, forcing hard shutdown. After returning the first NUC combo and having the replacement combo fail on me the same way, I tried a Samsung EVO 850 in place of the SanDisk, and all was well. Maintaining 5 Eggs because it may have simply been a bad batch of SanDisks, but with the Samsung the NUC has so far been problem free.

Overall Review: The Bluetooth plays nice with little Bluetooth keyboards, using a Hisgadget Rechargeable Mini Wireless with Trackpad, works from across a small room. Would also recommend a short, like 3 inch male-mini-HDMI to female-regular-HDMI adapter so as to reduce stress on the mini-HDMI socket. At first the fan may sound loud, but go to the BIOS with F2 and turn down the duty cycle to about 30, and it will idle almost silently.

Cons: Its really hard to state a con about this great little NUC, so I offer only silence here.

Overall Review: Earlier I reported that a USB DVD drive failed to block restarts. Of course it was a USB 2.0 device, specifically Asus External Slim DVD-RW SDRW-08D2S-U. I now suspect that a USB 3.0 Blu-ray drive might block restarts, but have no way to prove it.

Pros: easy to put together. had no issues with loading Win 10, Office 16 and updating drivers. Makes a great office pc and pc for the kids to do homework on. may get another NUC just for the kids.

Overall Review: Makes a great office pc and pc for the kids to do homework on. may get another NUC just for the kids.