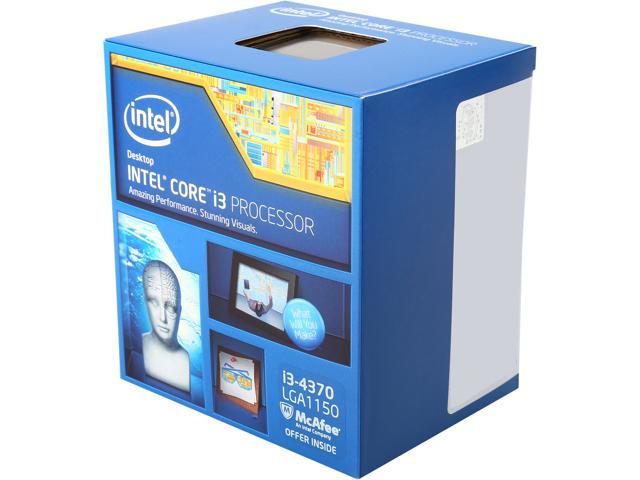 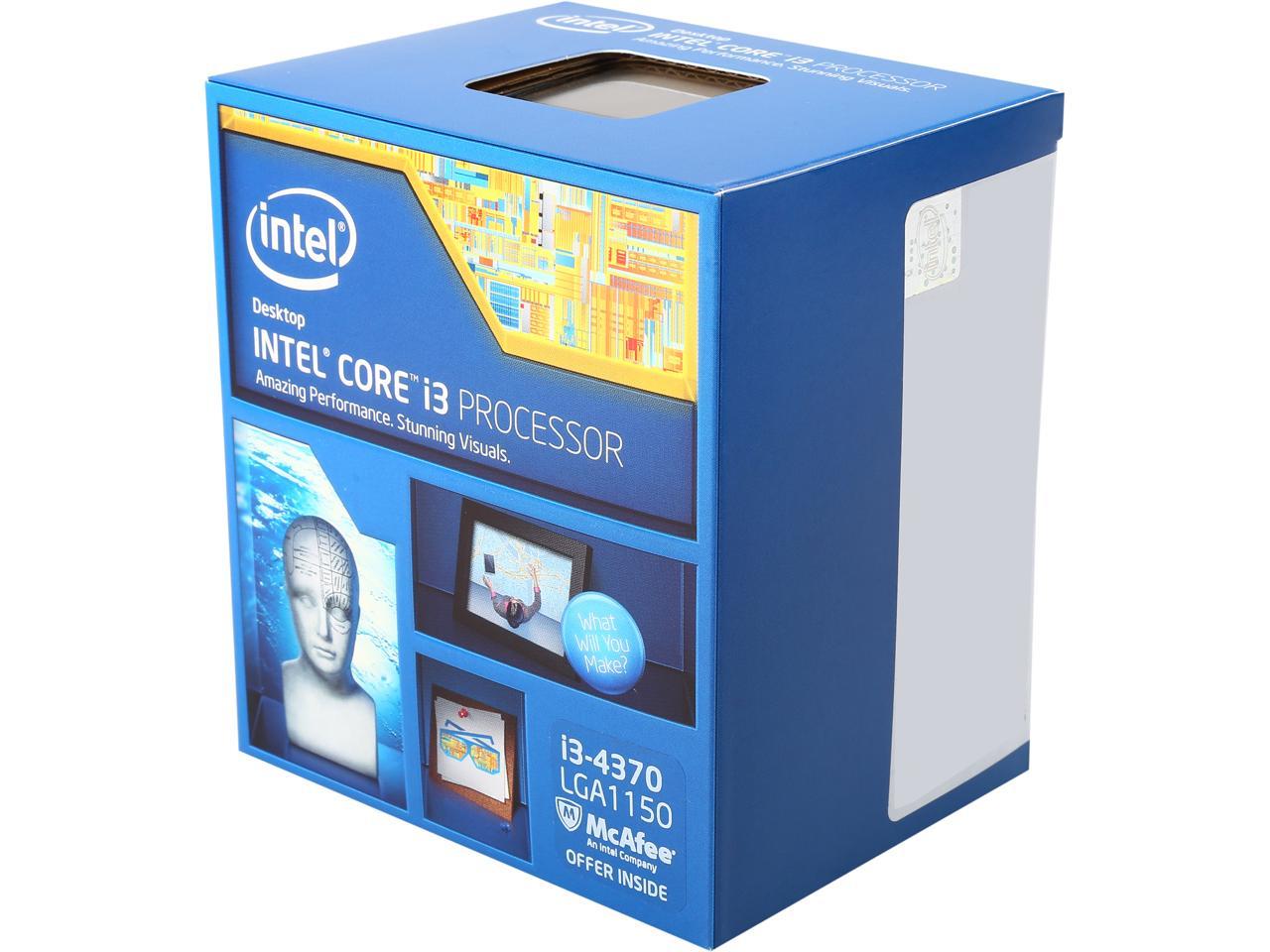 (25) Write a Review
OUT OF STOCK.
LOADING...
Overview
Specs
Reviews

Pros: As of this writing, the 4370 is the highest performance i3 available. This chip performs absolutely flawlessly and instantaneously for everyday tasks, oftentimes with better response times than some i5 chips. As someone who browses the web, watches HD video and listens to music, the i3-4370 is more than powerful for my needs. The fourth thread is often idling at 0%, meaning there's plenty of power left over if I needed it. I can't imagine noticing an improvement in these tasks with an i5 or i7. The stock CPU cooler is excellent. Initially I was wary of a stock cooler on a 3.8GHz chip. Depending on conditions outside the case, it idles anywhere from 79-90 degrees Fahrenheit. Even when benchmarking, I don't think I've seen it exceed 145 degrees Fahrenheit, and only momentarily.

Cons: None that I can think of, other than the peculiar placement of the i3 among Intel's product line. For "just" thirty dollars more, you could buy an i5 with four cores. It'd be a more powerful chip, but probably not as zippy. Also, it's a shame Intel doesn't sell a "K" variant of this chip, with an unlocked multiplier. Based on what I've seen from the stock CPU cooler, this chip could easily maintain a high overclock with little modifications. That'd be fun.

Overall Review: 1) I'm not so sure why the i3 line exists. Most people who buy a CPU like this for a strict HTPC or for "grandma" or "the parents" could get by spending roughly half as much for a Pentium, with likely no noticeable difference in performance of basic tasks. People who need more performance would go quad-core anyway, placing them in the market for a pricier i5 or i7. Don't get me wrong--the i3-4370 is an excellent, fast-as-hell chip for everyday tasks, but man, is it a middle child. 2) Someone here suggested disabling cores or whatever to maximize energy efficiency. I can't imagine that being based on good science. This is a maximum 54W TDP chip at nearly $160. If you want to save power, buy a "T" variant of the i3-4130/4330, or a Celeron or something. Those run at 35W tops, cost a fraction of the price of this chip, and you get to keep the performance benefits of both cores. Lobotomizing this chip will just make the other core work harder, increasing power consumption anyway. 3) While single-threaded performance is comparable to even the high-end i7 chips, this is no replacement for someone who truly needs more than two cores and four threads. In general Windows environments, web browsing, and stuff like that, even this chip is total overkill. For intense gaming, video compression, basically anything serious, look at the i5/i7 lines. 4) If you're a casual computer user looking for a boost in performance, don't buy a new CPU unless you already own an SSD as the boot volume. It's incredible how SSDs impact performance. An i3 with an SSD will be faster for general Windows tasks than an i7 with a disk drive.

Cons: (Obligatory stock cooler complaint) But it's not inadequate.

Overall Review: As a long-time computer enthusiast, I must say this little chip has thoroughly rustled my jimmies. My main rig is an overclocked, AMD FX octa-core'd, Nvidia SLI'd, RAIDed SSD'd, triple-headed, monster workstation. And I can say from trying it out for a month that (other than video encoding) a system based around this CPU feels snappier and faster than my workstation for just about every task I do with my computer. (I'm a dev, and a gamer, so there's a lot in that list) As mentioned, video encoding is the only thing this little i3 falls a bit short on. (It's really not that bad, it just doesn't have the cores.) And actually, if you're okay with the quality of Intel's QuickSync video encoder, the i3 performs very well. Because this particular i3 exists, I can not understand why anyone would pay extra for an i5.

Pros: This processor with its stock cooling fan runs quiet, cool, and fast. Its overkill for everyday tasks, but has exceeded my expectations in games. BF4 gameplay quality has increased significantly coming from an i3 2100 @ 3.1 GHZ.

Cons: When you consider a 4-core intel processor is only a few more dollars, one might argue the price is a little high.

Overall Review: I bought this dual-core cpu because I was happy with the performance of my sandy bridge i3, but needed to replace my motherboard. I was torn between a lower end i5 and this, because Im a gamer. I am thrilled with the gaming performance of this cpu and am glad I didn't spend any more money than I needed. System specs: i3 4370 msi h97 guard-pro 8 gigs ram @1600mhz r9 270x 4gb 1TB hdd sata 3 7200rpm

Pros: Best Gen 4 i3 processor out there 3.8 ghz is more than fast enough for most things Stock heatsink is more than acceptable for average use, and even with everything in the case under heavy load, it's still hard to get it to break 60C. Extremely impressed with this. Do not regret buying this for a prototype computer build. Performance-wise, seems to actually very slightly outperform my old Phenom II x6 1075T. When all six of its cores CAN be used, it does a bit better, but for only one or two cores, this CPU is amazing.

Cons: For me, none, aside from not waiting for the price to go down with the new i3 line starting to get off the ground.

Overall Review: (specs below) I bought this with the intent of using it for a gaming computer. My last build was an AMD Phenom II x6 platform, this time I wanted to try Intel, after almost five years. It wasn't hard to install, even though I did almost poop after dropping the heatsink right onto the processor by accident. Despite this 'just' being an i3, this, coupled with a 750 Ti, (and at 1080p) has been able to run Planetside 2 at Ultra (with some settings turned to high) in 98+ vs. 98+ battles, while maintaining above 30 fps. Warframe, with all settings on/up, is 60+ fps except in heavy survival games. Bioshock Infinite also maintained 60+ fps during the entire playthrough on this new computer. It was absolutely marvelous to play the game this way. It dipped, not a lot, in large combat, but was fairly consistent. Near max settings, no antialiasing. I sit a little far away from my 27" monitor, I don't need AA to appreciate the image. :) I put this same graphics card in my old computer just for comparison. As stated in Pros, this thing actually manages to do better in every game I play, and almost every stress test, than the Phenom II x6 in the old compy. It's VERY impressive for its... size? Speaking of size, the heatsink is... well it's the default Intel heatsink, so it's tiny, but it works. The CPU has to hit above 60C for its fan to kick into audible range. It's good and quiet. I haven't attempted any overclocking yet however, and I'm ordering a TX3 preemptively for that purpose. 10/10, would recommend for a budget Intel gaming build. I wonder how it would perform with two cards in SLI. Case: Xigmatek Aquila Black, Windowed Motherboard: ASRock Z97M OC Formula CPU: Intel Core i3 4370 3.8 GHz Drives: ADATA Premier Pro SP900 128 GB SSD for OS and drivers. ADATA Premier Pro SP900 256 GB SSD for... everything else. RAM: ADATA XPG V2 2 x 8 GB DDR3 1600 Graphics: PNY GeForce GTX 750 Ti OC 2 GB Power Supply: Corsair CX500M This is a pricey, but otherwise FANTASTIC portable LAN box. It boots into windows before any parts of the logo touch each other, even! That got me excited. Soon I'll have three yellow LED fans, and I'm transplanting yellows onto the front fan of the case, for maximum black and yellow, black and yellow

Cons: I'm not going to list "doesn't overclock" just as I wouldn't complain that my car doesn't run on nitrous; I didn't buy it for that.

Overall Review: My Mom's Phenom II 720BE was finally getting flaky after some 6-8 years, so it was time for an upgrade. This CPU blows the old one out of the the water. She does a lot of surfing, corresponding, FB, and maintains a grandmother-sized photo collection, using PhotoShop Elements. This CPU breezes through all that.

Pros: It is fast and does a good job. The price is very good for the performance.

Cons: No cons at this time.

Overall Review: I like the speed and responsiveness of this processor. It does everyday computing in a flash. It is one of the fastest core i3. It has hyper threading so it behaves like a quad core. Performance monitor and device manager shows it like a quad core. It has a good score in cpu benchmark. The benchmark beats my old Phenom II 956.. impressive.

Pros: This was a compromise from a XEON processor. I needed a processor that had some very basic graphics for install of operating system and would support ECC memory. System has been running for about 8 months 24/7 without any problems.

Cons: Non that I can tell.

Overall Review: This fits the bill. Installed on an ASRock E3C224D2I motherboard running FreeNAS-9.3-STABLE with 4 HGST Ultrastar 4GB SATA drives with 16GB ECC memory. Case is a Fractal Design Node 305. Everything was a tight fit, but it works. Some people have stated that it will overheat so I installed a Noctua NH-U12S cooler and have no problems even under heavy loads

Cons: whiny stock cooler fan.(might just be bad luck on my unit) cools just fine, but annoying noise underrated by the ignorant because only 2 physical cores

Overall Review: I've always been a budget conscious game PC builder and never felt like the extra money my friends would often spend on builds added that much more to the gaming experience. Because of that I have bought AMD chips exclusively since 2004. However I am now an Intel convert. This CPU seems tailor made for my needs. It's very underrated in gaming PC circles. I replaced a gamer favorite AMD FX-6300 with this little guy and I have seen only improvements in almost everything I do on my PC. Especially older DX9 games and less optimized indie/early access games. I was getting so fed up with so few applications using all the cores on the FX. I would encourage the enthusiast gamers on a budget who aren't concerned with overclocking seriously give this guy a look over the FX chips. For the price this CPU is hard to beat. For the record, very few FX chips rate higher on CPU Boss than even the i3-4360 as they don't even list the 4370 yet.