Shop Confidently with 30-Day Hassle-Free Returns
Sold by: Newegg
Shipped by Newegg
Newegg’s gift-wrap service is the ideal solution for making your gift special! Select your item as a gift, then add your message. Your gift will also be discreet with no prices being included on the packing slip.
Price Alert
Add To ListFound on 168 wish lists 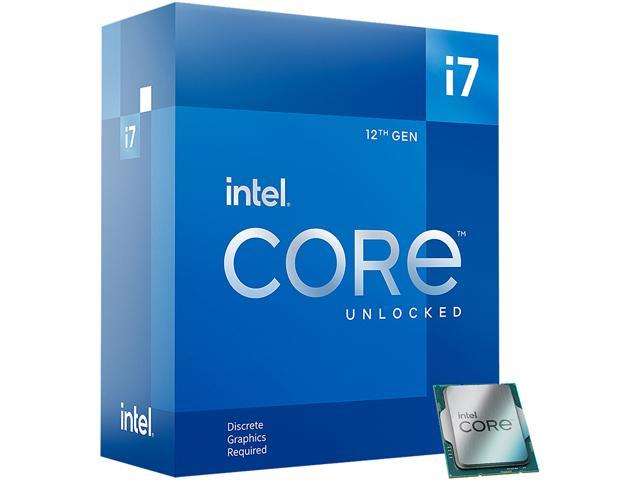 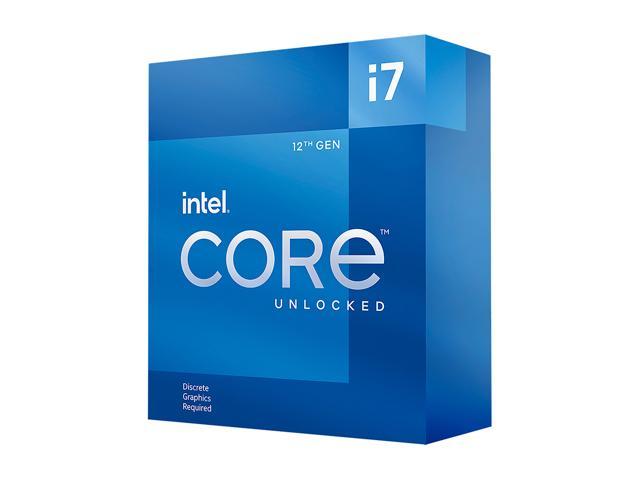 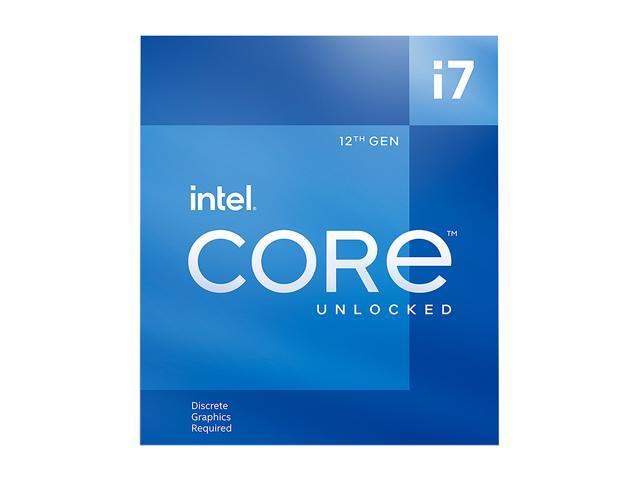 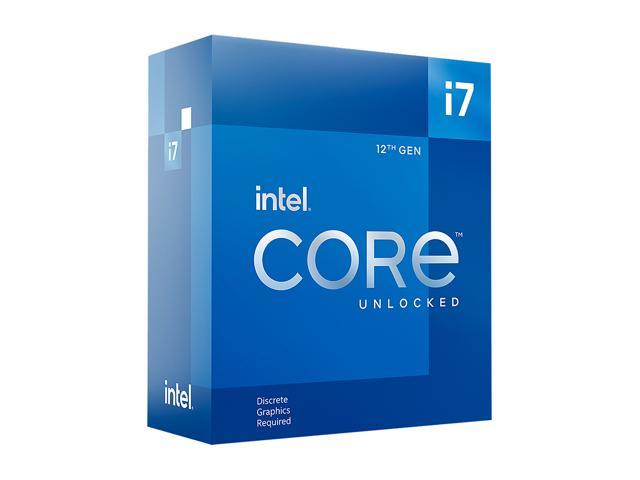 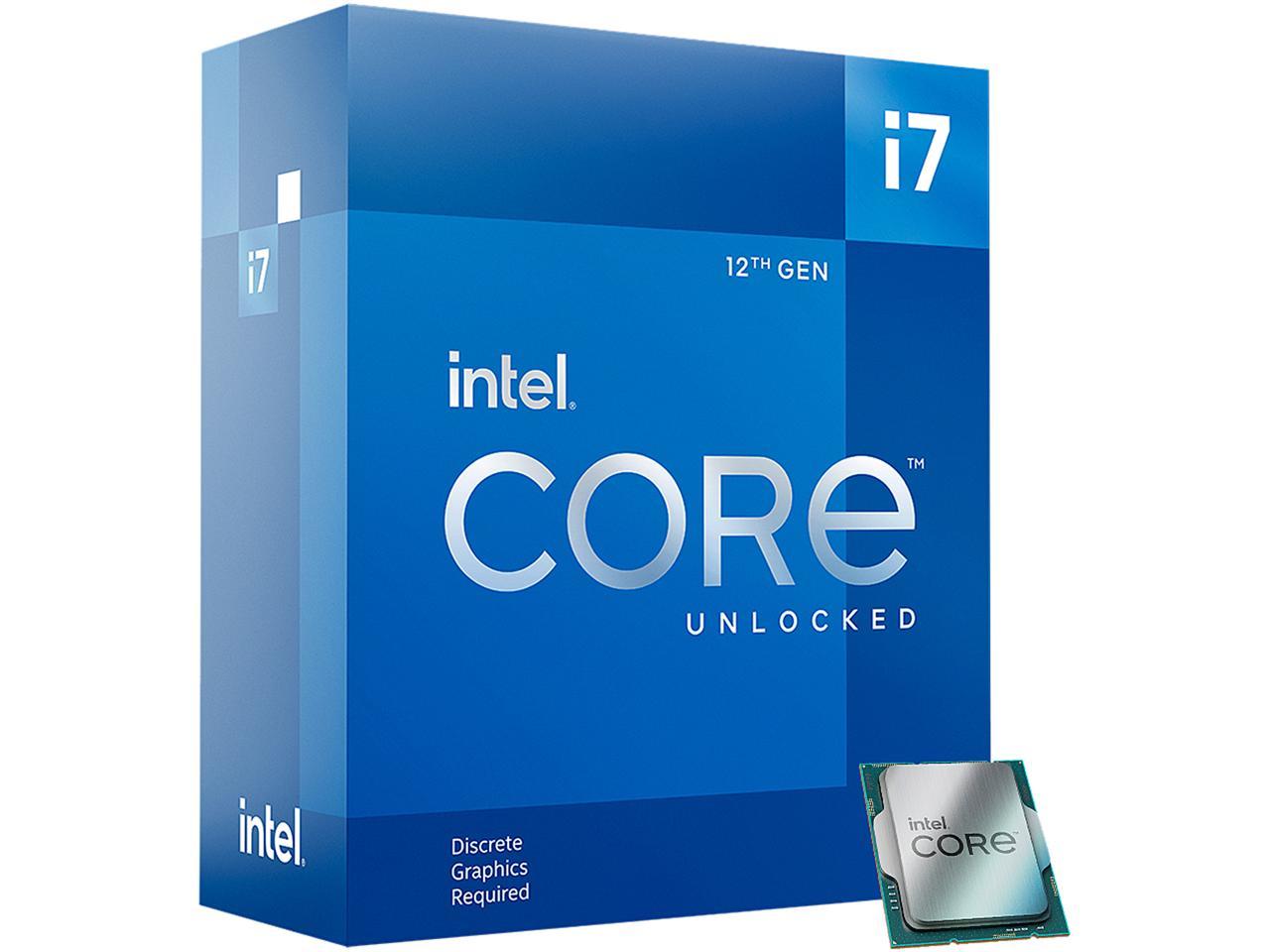 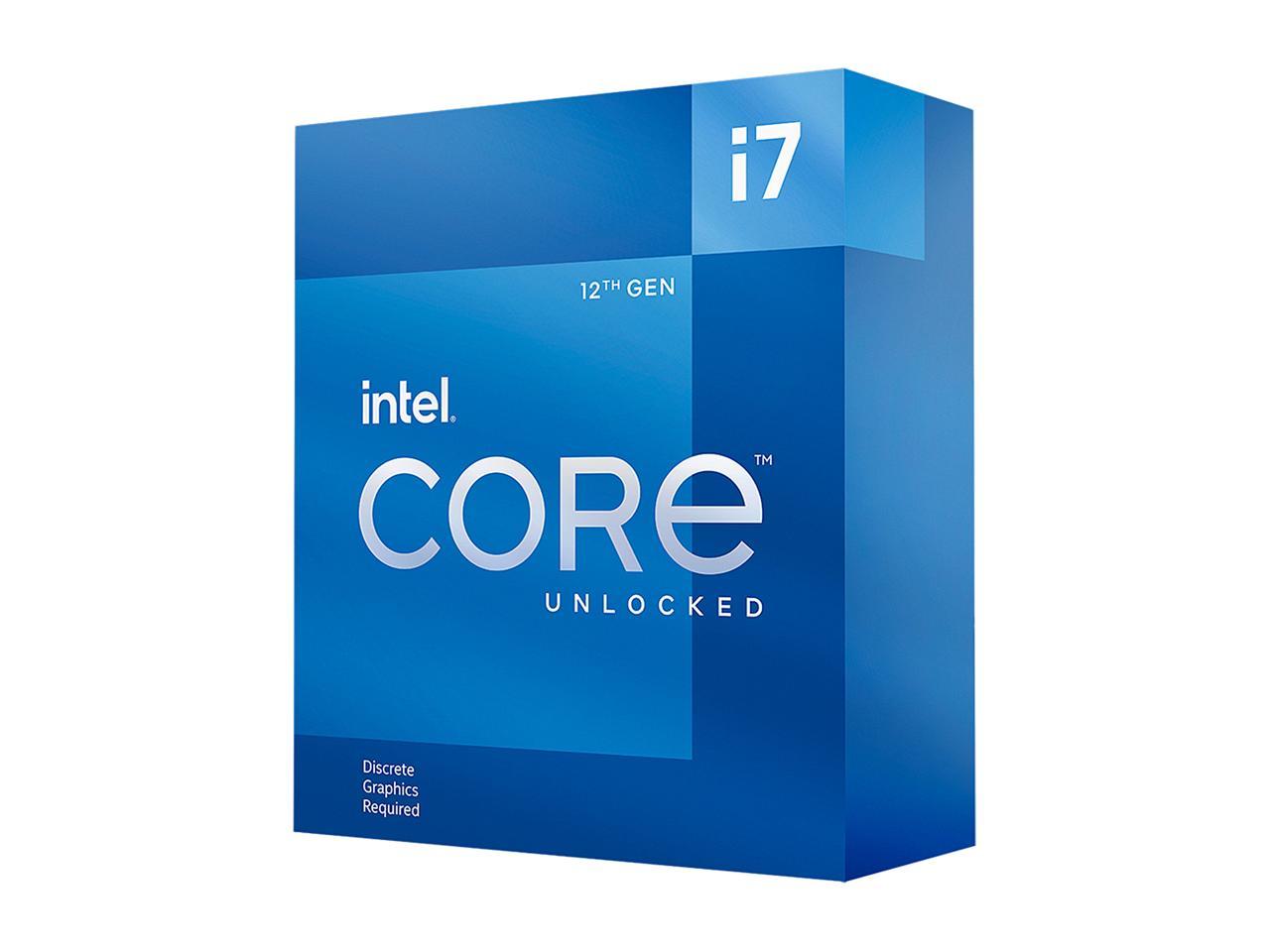 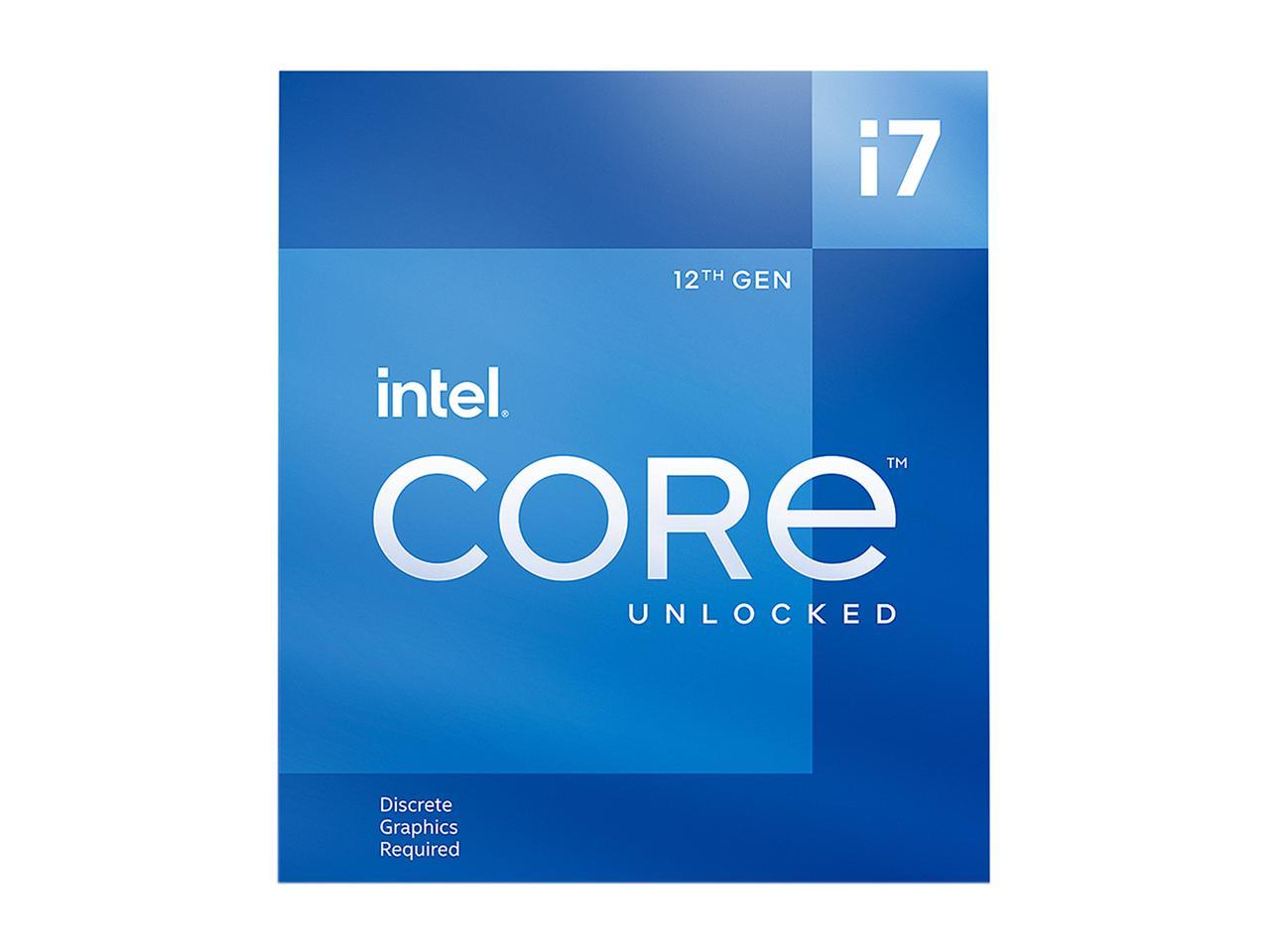 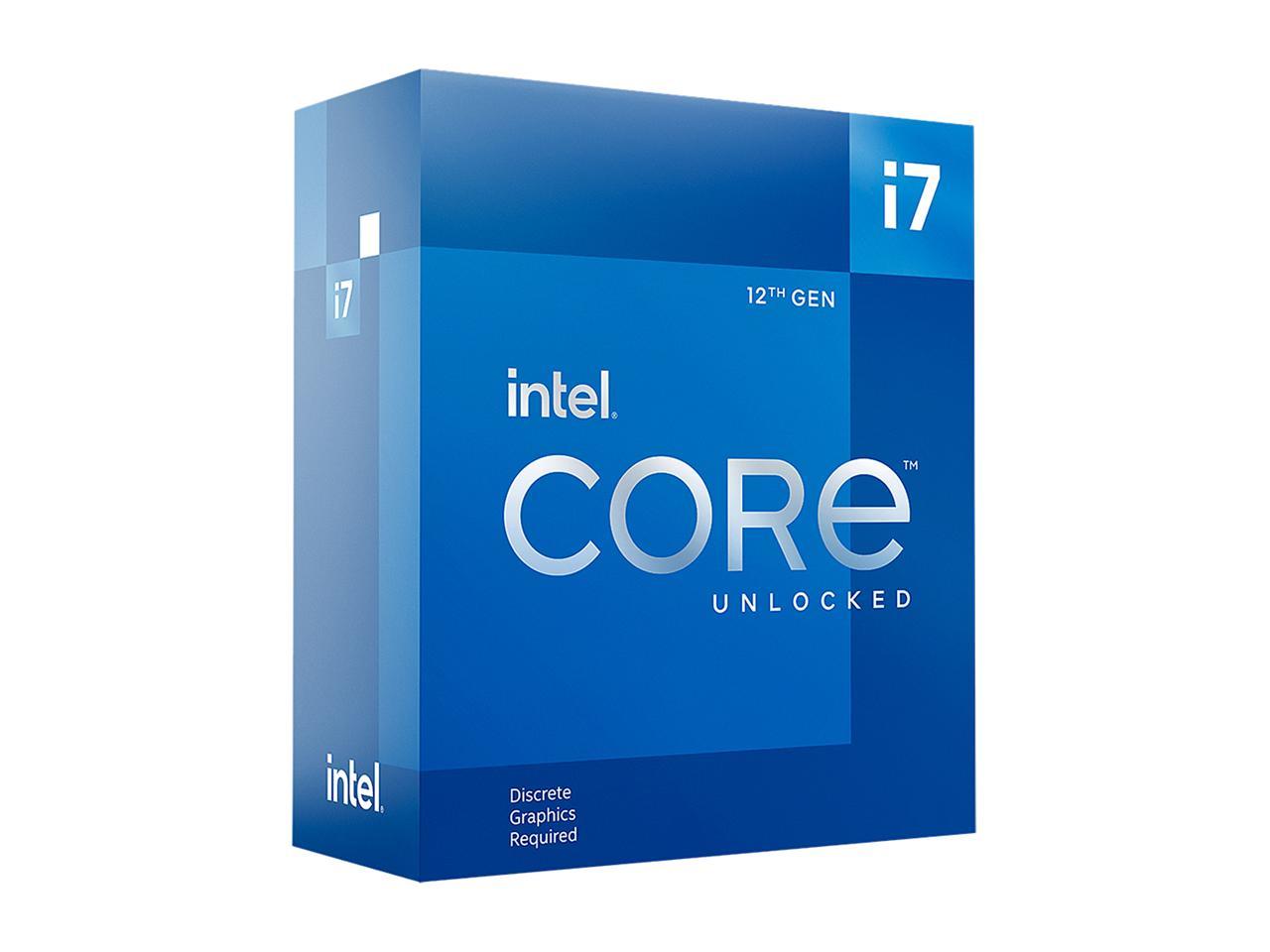 Featuring revolutionary hybrid design, the 12th Gen Intel Core processor is a breakthrough in x86 architecture. The hybrid architecture incorporates two kinds of cores — for the first time in a desktop processor — Performance-cores (P-cores) and Efficient-cores (E-cores), delivering performance or efficiency when you need it. Other features include PCIe 5.0 readiness, DDR5 support, and Intel 7 process technology for higher core density.

The Intel Core i7-12700KF has 8 P-cores, 4 E-cores, and 20 total threads, delivering a new level of performance for gaming, creation and productivity.

* No integrated graphics. A discrete graphics card is required to complete your system.

Performance beyond the cores.

1. On performance cores. Performance varies by use, configuration and other factors.

2. Unlocked features are present with select chipsets and processor combinations. Altering clock frequency or voltage may void any product warranties and reduce stability, and life of the processor and other components.

Overall Review: I have this in a system with the Asrock steel legend z690 and a 3060ti. It is running far cry 6 at over 90 fps on all ultra settings 1440p. This is working perfectly so far on windows 11. (because Microsoft is in bed with intel, but whatever) As of right now, two days into usage and gaming, i have no complaints. edit: one week in, still no issues, seems to run everything as normal, getting high fps in games and zero stuttering or lagging issues whatsoever. Great cpu so far. edit: a few weeks in, thought i would mention. I have this strapped to a noctua NH-D15, one of the largest air coolers out there and competes with water coolers. This CPU will reach mid to sometimes high 60's while playing games. Cinebench got this CPU to around 80-84 ish degrees but did not thermal throttle under stock settings. I feel bad not overclocking this as it is a K series, but it is already so powerful. It scored 21000 tho lol. so, i would recommend a LARGE COOLER with GOOD AIRFLOW IN THE CASE. This is a hot one. ALSO it will consume far over the 150 watts. Power draw with Cinebench had it at around 205 watts.

Overall Review: I replaced my 4790k with this in a new build. It's fast and I didn't realize how much more responsive things could be. Already see such a big difference.

Overall Review: -Last time I built a PC I went solidly mid-range on processor. Given that it's about the most difficult component to replace, I went high-end this time. I wouldn't say I regret getting this one, but I really would have been fine with a 12600 (i5) instead and could have saved $120. I mainly do high-end gaming and photo processing, and I barely tax it at all (at least until I do the big batch exports). If you do more video work or numerical simulations it may be more worthwhile. It'll probably last me a few years longer than my last CPU did, but still not convinced it'll be much difference at that point against the i5. -This CPU seems about the limit of what your average air cooling can handle. With a single-fan CM Hyper 212 Evo 2, it gets to ~80° C ± 5° when running Folding@Home full-throttle. It'll work, even for hours at a time, but you may want to spring for an AIO, or at least a 2nd CPU fan if you're running at 100% max turbo power all the time. -Windows 10 has a few usability issues with the hybrid architecture. It seems any "below normal" or "low" priority processes get sent to the E-cores by the thread scheduler. Most of the time you won't notice, but sometimes high-load tasks are assigned these lower priorities to keep things running smoothly, and in such cases they'll get stuck using just the 4 logical processors on the E-cores and none of the 16 available P-core logical processors. There are tools like Process Lasso to help automatically reassign processes to P-cores, but Windows 10 users will need to keep an eye on task manager to identify if high-load processes are getting stuck on E-cores. This is more a knock against Microsoft than Intel though. Still feels like hybrid architecture is worth having so high-load stuff can go to P-cores and the system still has E-cores to manage essentials and avoid getting choked down. -Fun fact: just the 4 E-cores on this seem faster than the entire CPU that I'm replacing (i5-3570)

Overall Review: Works fine even with the cheap air cooler

Pros: Not sure what to say. Installed it and booted up. Did a quick benchmark and seems to be on par with other 12700.

Overall Review: Should be a fast cpu for years to come.

Overall Review: It's a CPU. It processes things. I like that about it. The price-to-performance ratio is good, and the efficient core / fast core system seems like a pretty good idea. With this upgrade, I've seen my system behave in a much snappier fashion, which is great.

Pros: It was choppy preety quick at first with Patriot DDR5 4800(2 x 8GB), a very basic very good RAM. After memtest my ram and turning this machine off and on for a few weeks and trying different spinning hard drives I bought an almost new 4GB western Digital with a 256mb cache. The new hard drive I think smoothed it out and the feel of the computer, response beats my X299 with Platinum 3600 ram. I will not have the move capacity I am guessing, but I am happy I am tring the new platform and keeping this one simple will help as my first small DDR4 broke part way when I plugged in the wrong vidio adaptor. Gone is the run away clock speeds that happened with new DDR4, the guys got this right. As alway, I notice, the just below the top of the line CPU is the best deal for the money. I did try a 12900K with the graphics chip and sold it to keep this one. Thoses graphics chips that are on cpu die I don't think will ever match a video card and I did not like the faster cpu if I used its onboard graphics chip, it was useless. The debt I incured on that cpu, which I sold, went to ram for picking up some old threadripper set up and another old X299.

Cons: None for quite a while I suspect. This little board will be little for at least a year as Raptor Lake will still fit this socket and in the past going to more channels on a motherboard means a bigger cpu socket too. I am guessing in about two to four years it is going to get huge with how many channels the average PC user can have.

Overall Review: I recommend this 12700KF with no graphics chip for the price over the 12900 , with or without the graphics chip. I have only 16GB (2 x 8GB patriot) of 4800 ram, but now the computer feels like a full enough computer for me to get around the internet on. I can try some inexpensive Oloy 5600 next when my two other boards get populated with some Team 3600. I do buy from NewEgg as they are the most releyable for returns when you get memory errors while performing memtest, quicker turn around.

Pros: I got a fast delivery, so I appreciate that. Once I got it into the new motherboard and installed w11 been smooth sailing from there. Paired with Rx 6800 XT it hits like 170 to 145 fps average in Far Cry 6 with no dips, where my 7700k was routinely dropping to below 60 while driving or flying. Temps are decent under load too!

Cons: This isn't really a con - make sure you only buy the KF if you have a dedicated GPU. DDR5 can be expensive, that's why I stuck with DDR4

Overall Review: If you're looking for a high end cpu for gaming and some productivity tasks, this is the one to get.