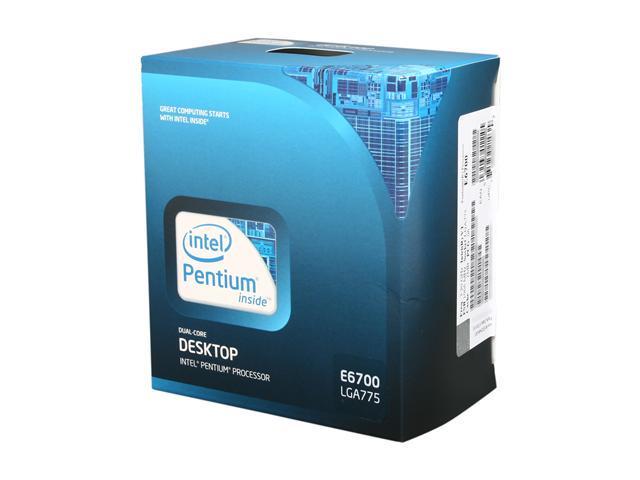 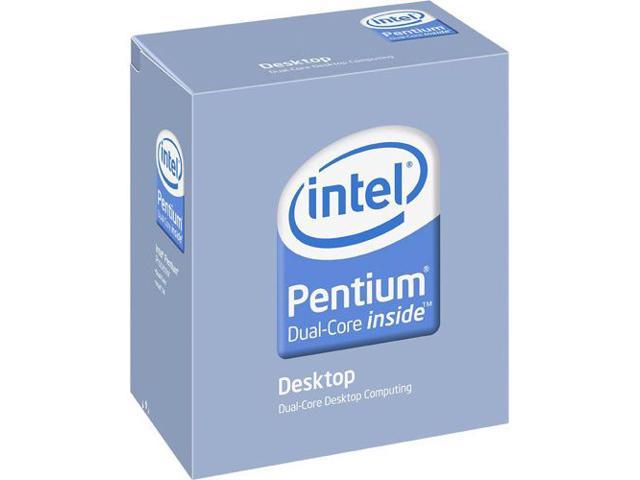 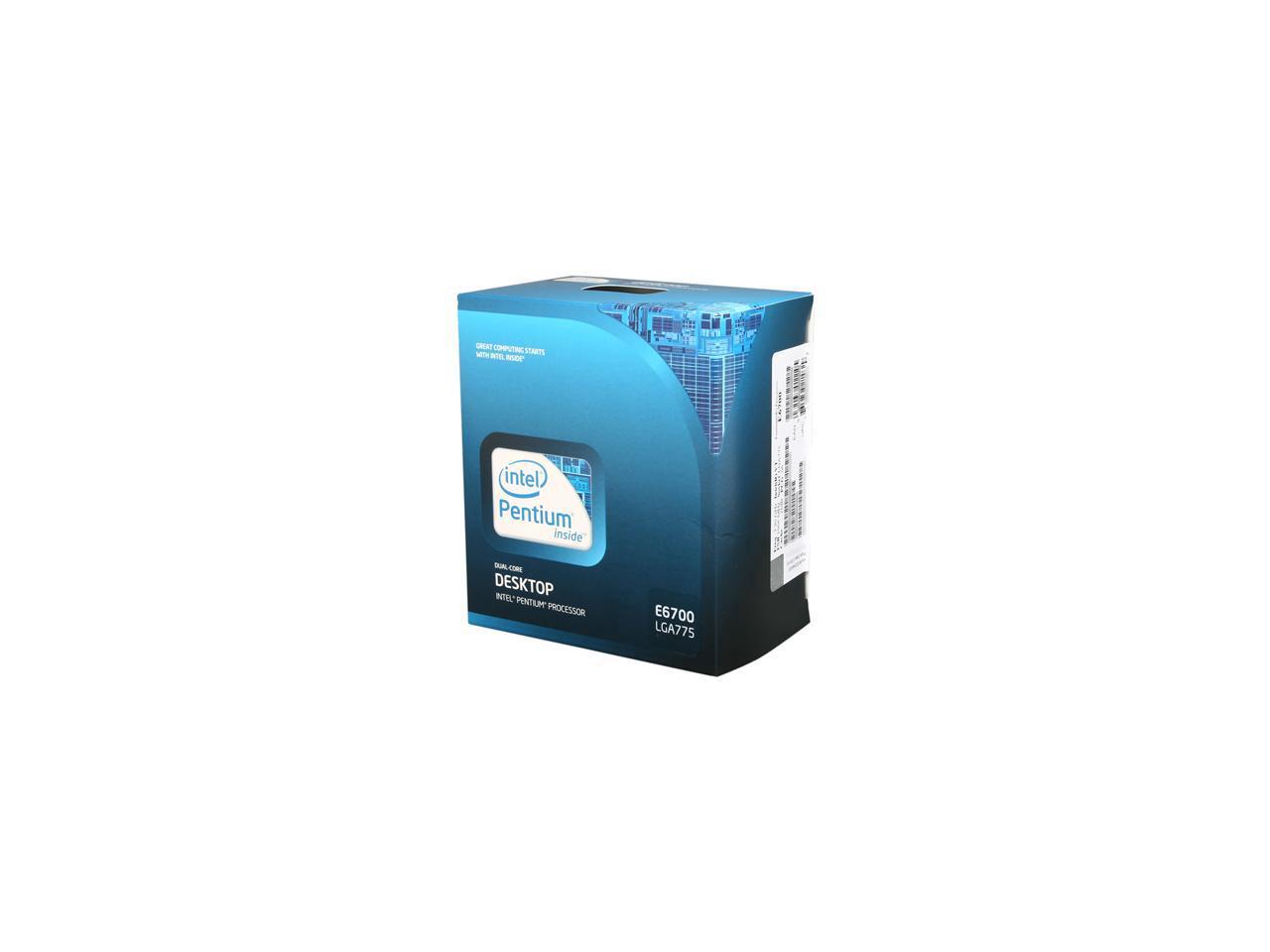 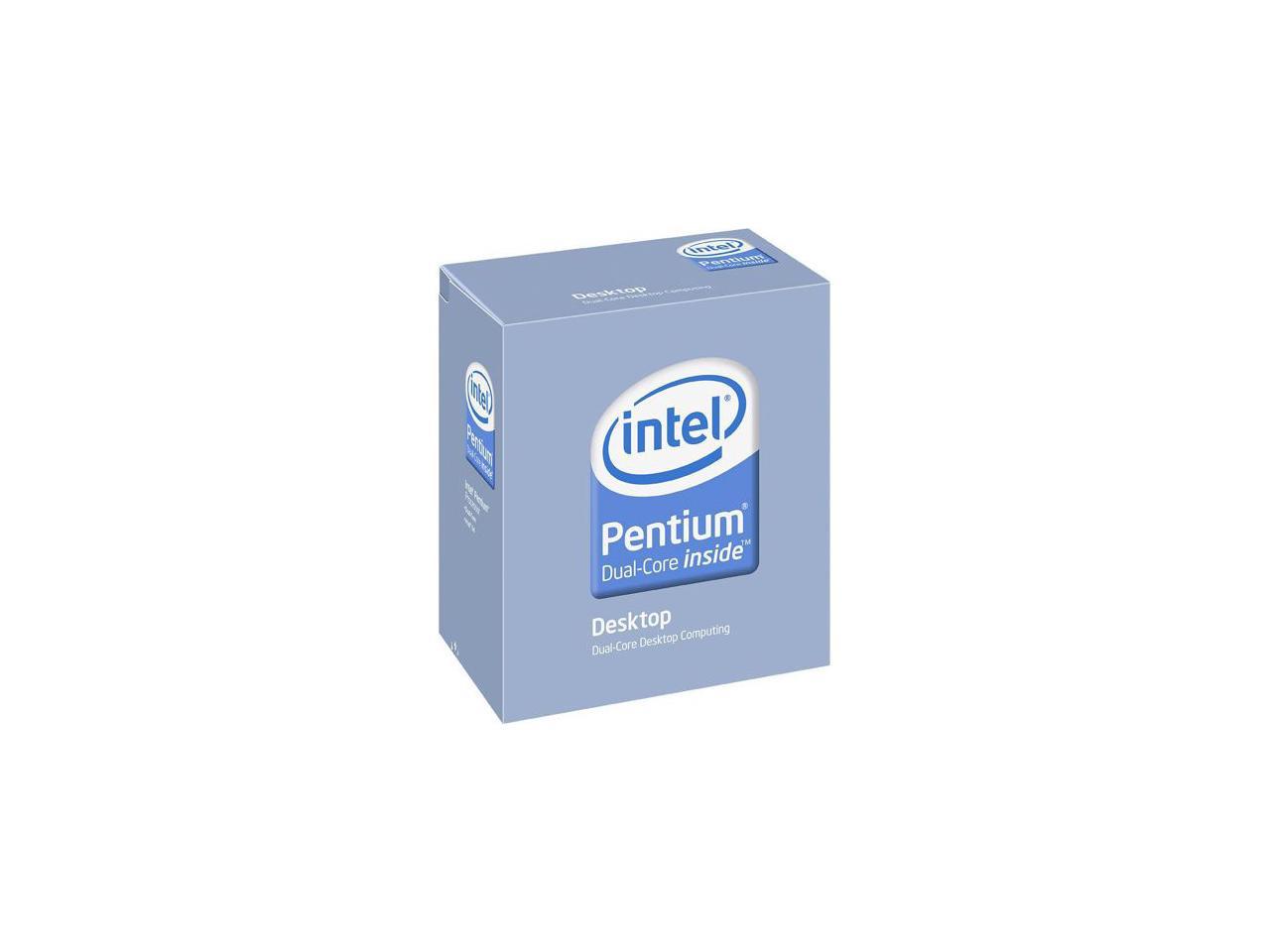 (57) Write a Review
See more "intel pentium"
In stock.
Ships from United States.
Most customers receive within 2-8 days.
Overview
Specs
Reviews
With the Wolfdale core, Intel pours more power into the Pentium package. The 45nm manufacturing tech allows Intel to reduce power requirements to 65W. Lower power means less CPU heat, which translates to lower system heat and longer system life. They also pack more features into the chip.
The L2 cache has been bumped to 2MB and the Front Side Bus has been pushed to 1066MHz. They also boosted memory access and execution speed with Wide Dynamic Execution and Smart Memory Access. These technologies work together to let the processor handle more instructions with more data per clock cycle. You'd better watch out -- your enemies will be shooting back faster now!

Learn more about the Pentium E6700

Pros: Probably all sorts judging from the other reviews.

Overall Review: I looked at my motherboard specs and thought this would be a good upgrade. It said a "E6700 core 2 duo" not, E6700 dual core. Hindsight being what it is I should have known better. Not compatible with a Q965 chip set. You can't return CPU's for a full refund, anybody want to buy one cheap? Can't give a bad rating because of my mistake and lack of thorough research. Which I now have done. Anything you want to know about these chips just ask me, now. Oh, the tech knowledge thing? I'm beginning to wonder myself.

Pros: I wanted to upgrade an older AMD 4800 on the cheap so I targeted this CPU with a DDR2 motherboard (Gigabyte EP43-UD3L). The upgrade was less than $200. The new CPU gets a 6.6 score under Windows 7 and is about twice as fast as its replacement. Actually, that's the same score as my E8500 which is a much more expensive CPU. I guess you'd call this a "best bang for the buck" CPU. There were no complications whatsoever during the build. Plugged the CPU into the motherboard, swapped the memory and after making all the other connections, it came up first time. One of the major advantages of staying a generation behind is that all the hardware is very stable and fully evolved.

Cons: I weighed upgrading to an i5/i7 CPU at about 2 to 3 times the cost but finally decided against that temptation. It's great to have bragging rights for the latest and greatest but the E6700 is a very capable CPU. It's just so cheap and sensible, it finally won me over. But you have to decide that's what you want. Not as much fun as something smoking.

Pros: I have upgraded several systems to this processor (personal and business). At the same time I also installed better and more memory, and a better power supply. This is a great CPU if you also install the correct parts to support it.

Cons: Ignorant review writers: The person that said this CPU is ”A bit slow” doesn’t know what he is doing, a well supported 3.2 GHz CPU is not slow. I have 2 gaming computers with this CPU, and they play “Crysis 2” (on high) just fine. What kind of moron would build a new system with 4 year old technology; OF COURSE it’s only good as an upgrade or repair.

Overall Review: In order to use extra cores, the operating system AND the programs you are running must know what to do with them. More than 80% of the programs and games are too simple to justify writing multi core usage into their programming. Because of this, for most programs, CPU speed is much more important than the number of cores. For most people’s purposes, a fast 2 core CPU will run much better than a slightly slower 4 core CPU.

Overall Review: I have eight computers running Wolfdale processors, I would recommend the line to anyone looking to build a gaming machine on a budget, you wont be dissappointed. I also use the standard cooler kit that comes with processor and do not overclock it. I have been able to run every game I own on max settings. Just make sure you get a half decent video card to go along with this.

Pros: Very good performance for the price you pay. Scored almost 2100 on performance test 7 (passmark software). I haven't done a lot of overclocking yet but it looks promising. Dual-core, 3.2 GHZ, and 2mb of ram very good for the price. Stock heatsink seems to work very well. Idle temps stay around 90F, under load they can get up to 120F, occasionally higher.

Cons: Really can't think of any

Overall Review: Really nice processor, might be older technology but still very good. Do keep in mind that even with overclocking you won't be getting the performance you would get from a newer i3 or i5 seeing as they have the hyperthreading.

Pros: I used this on my 1st every gaming build, Yes. For gaming. Runs Amazing. I have no Knowledge of Overclocking at all and this CPU eats everything i toss at it. Great price for a great CPU.

Cons: I couldnt agree more with Luke Cool. Ignorant review writers : "Runs minecraft fine, at low settings, at around 30 fps." Bro. I run Aion at max settings with this Puppy. This CPU doesnt even fart. Really? Why the hate.

Overall Review: I dont really understand why people go uber High end on Rigs. I spend 850$ on my rig. everything from the ASC- to my Mouse and keyboard. I got a friend with a rig he spend 4 on and when we game out everything looks the same. He thinks i spend 2.5K+ on my set up, LOL lets not tell him okay?

Pros: Very Fast. I replaced a 2.0 GHz duel core CPU (an Intel E2180) that was way over tasked. I installed this 3.2 GHz duel core CPU (an Intel E6700) in its place. That DELL computer use to take over 15 minutes to start, and now it takes seconds. The E6700 gave that old DELL the kick it needed. The customer is very happy with the computer now. On simple task, it runs as fast as my E8400.

Cons: It comes with a small heat sink, I like to see some overkill from my heat sinks. Barely good enough just doesn't cut it! I left the E2180's heat sink in the computer.

Overall Review: The Dell Vostro Desktop 200 computer I put this in also had a cooling problem, the back cooling fan plugged into the main bord was barely turning. I wired that fan directly to an extra HDD connector on the power supply and its RPMs rose over 90%. On the power supply, the yellow wire is +12vdc, and the black wire is ground.

Pros: No issues, booted up no problem. Scored a 6.6 on the Windows Experience Index, not overclocked yet. I'm using this in a custom HTPC case made out of an NES console. There is little airflow in there, and it has been running smooth and cool the whole time.

Cons: I didn't get it for free. The sticker it comes with isn't very shiny. =P

Overall Review: Wonderful processor if you've got a 775 board and you're on a budget. It has exceeded my expectations so far.