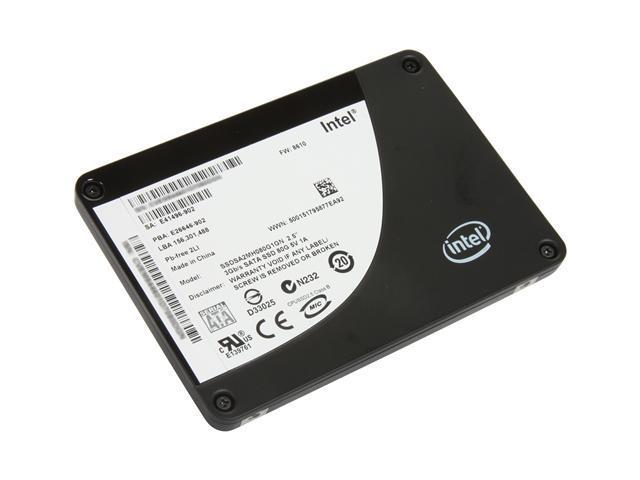 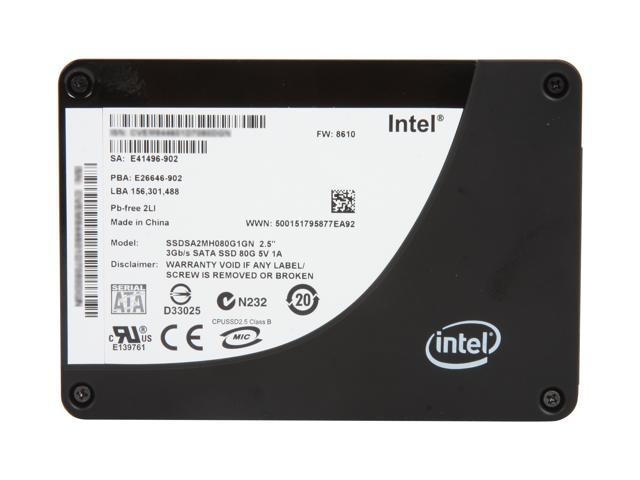 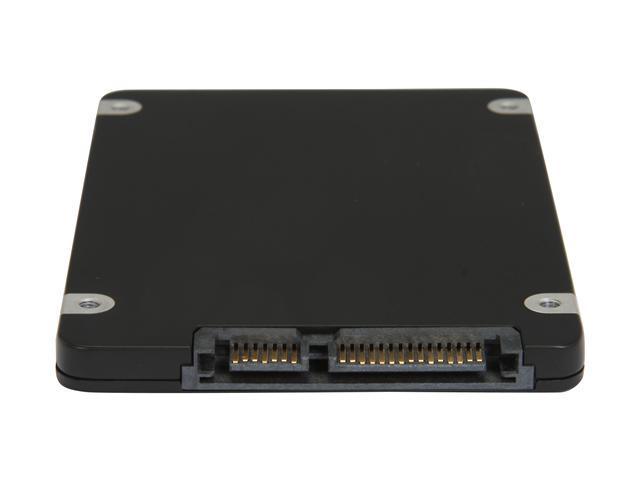 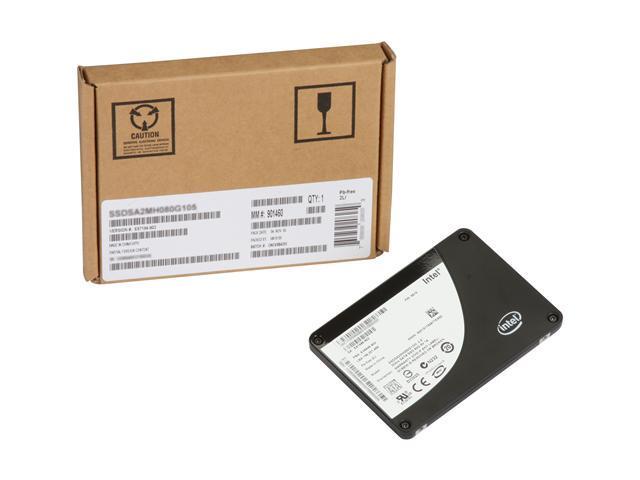 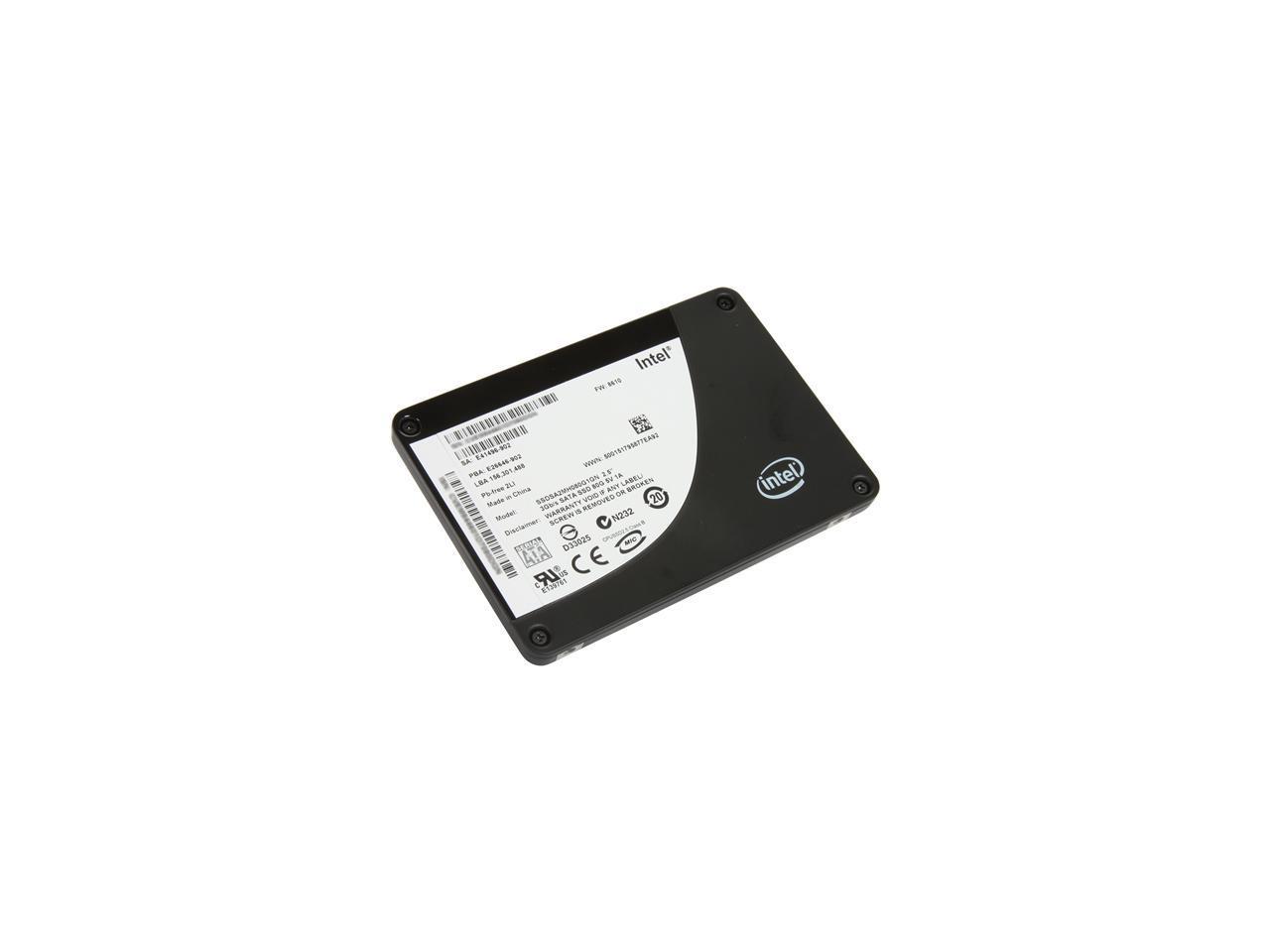 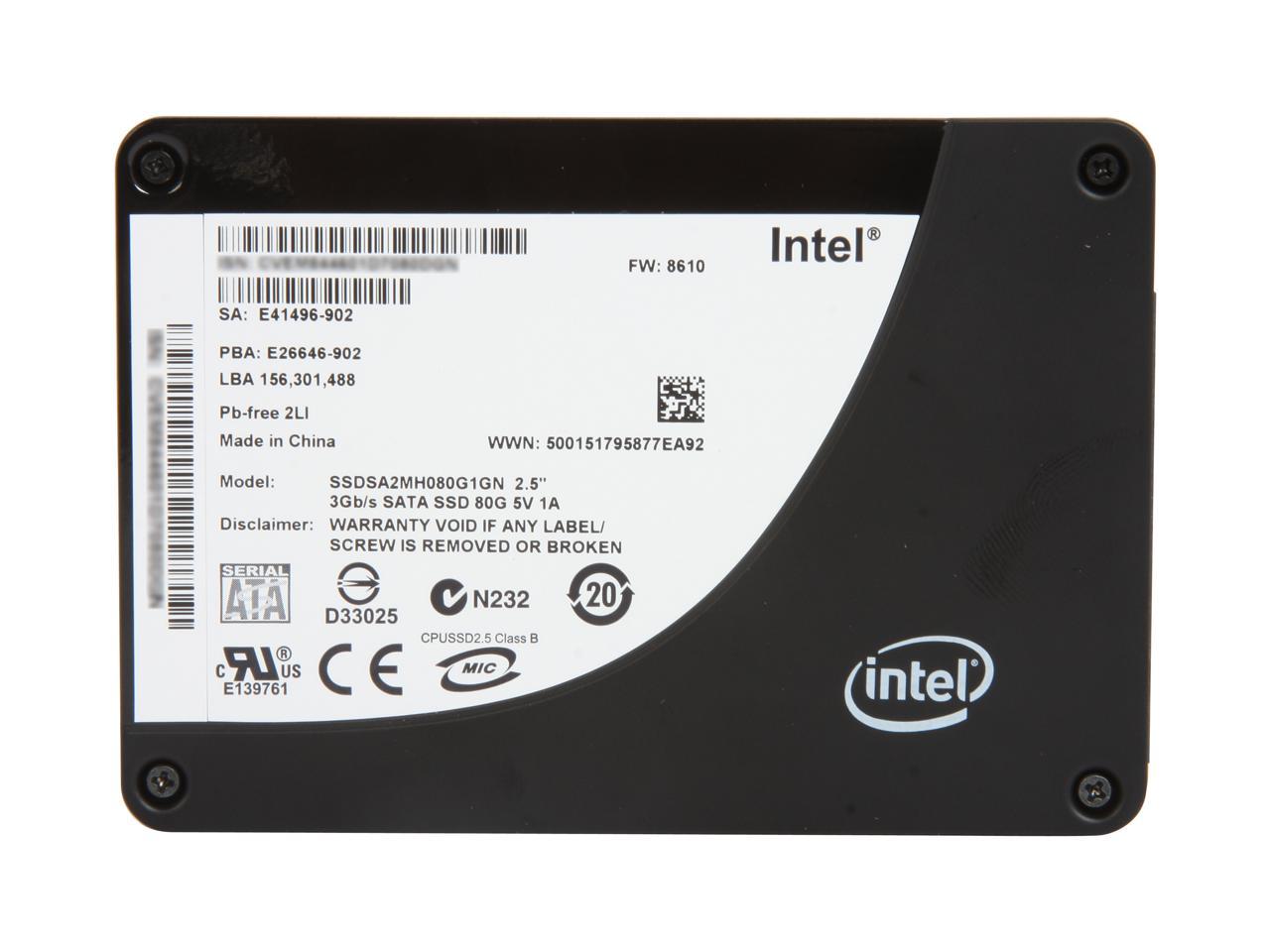 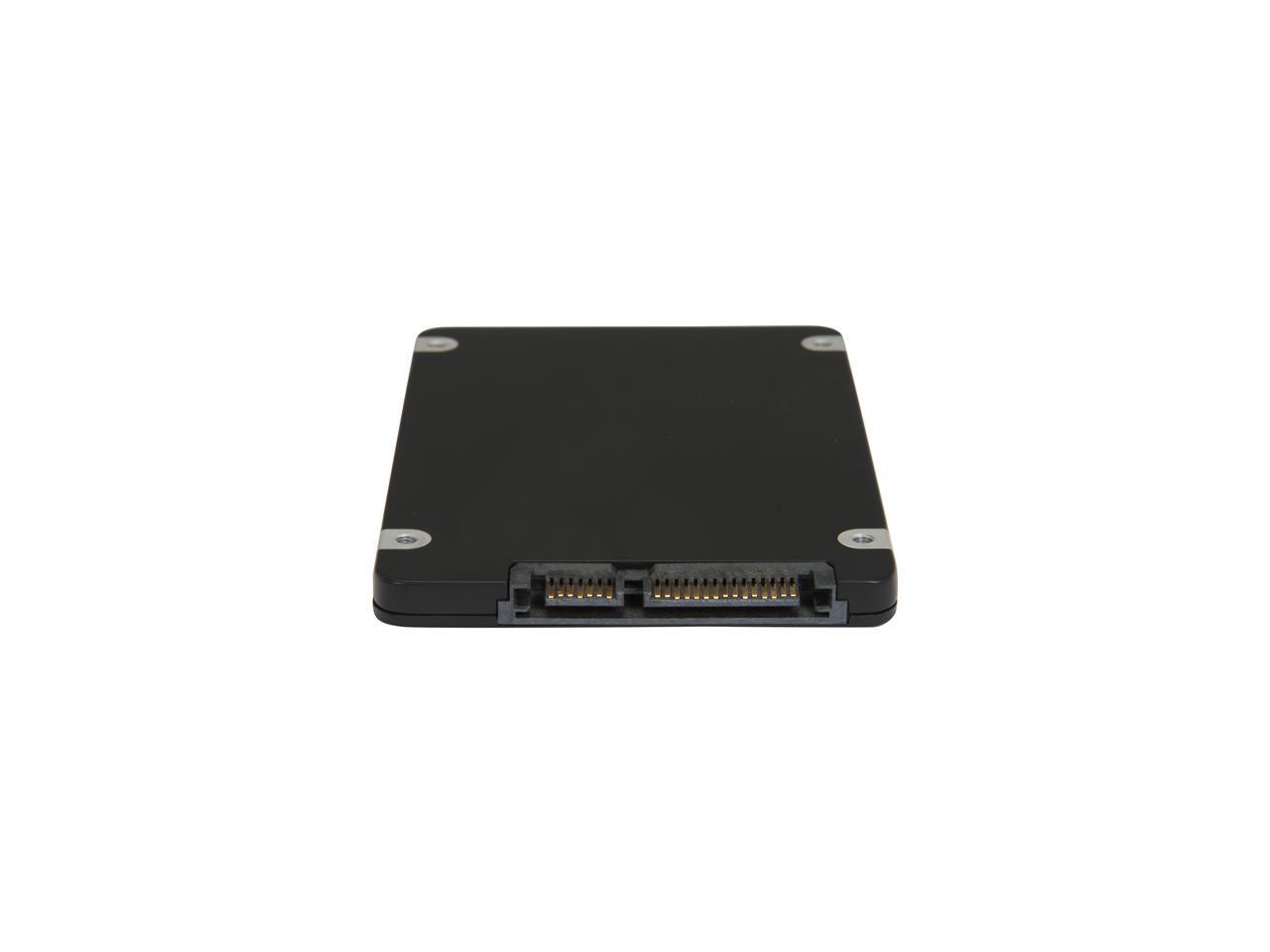 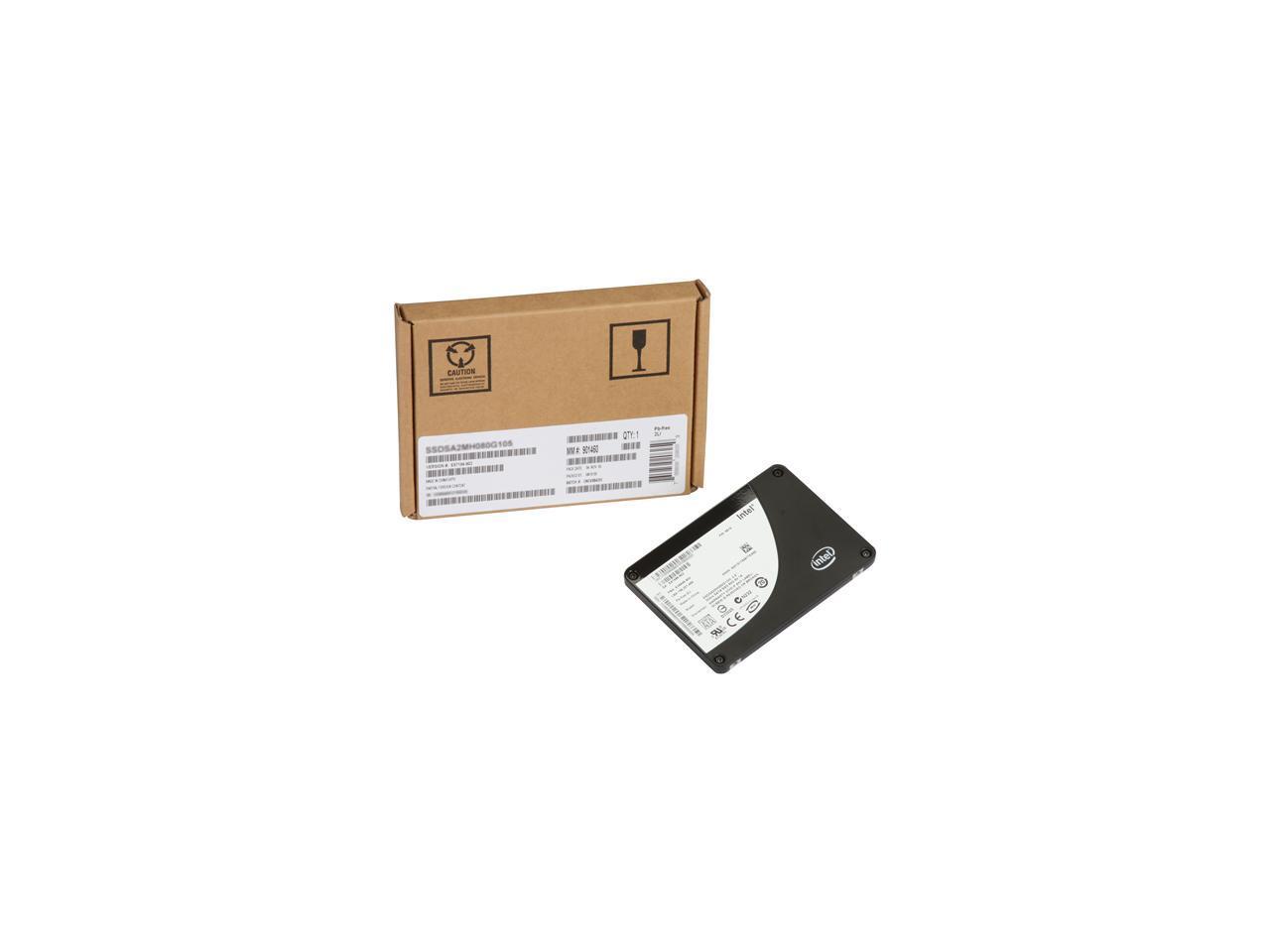 (240) Write a Review
OUT OF STOCK.
Overview
Specs
Reviews
Bring an extra level of performance and reliability to your PC with Intel's X-25M Solid State Drive. Unlike regular hard disks, the Intel solid-state drives have no moving parts, giving you a cool, rugged storage alternative. The lower power needs of the SSD translate to lighter notebooks with a longer battery life.
These innovative drives deliver outstanding performance with the latest-generation SATA interface and architecture with 10 parallel NAND flash channels and Native Command Queuing for up to 32 concurrent operations. Far faster than traditional drives with impressive reliability, these Intel drive perform better and are likely to last longer!
Keep ahead of your storage needs with Intel!

Learn more about the Intel SSDSA2MH080G1

Pros: Very fast drive... my applications feel like they just spring up to life when I execute them. This drive definitely breathed new life into my MacBook Pro "Classic" Core 2 Duo 2.2GHz and 4GB RAM.

Cons: The price... time will change this. I am sure in a couple of years you will laugh at a 80GB SSD and what we paid for it. I have yet to notice any considerable battery life increase, probably due in part to the battery needing to be replaced (a high number of cycles on it).

Cons: Doesn't work with the new MacBooks in BIOS mode. Linux can see it, but if you try to boot off of it for Windows or Linux the drive won't be found by the bootloader. I had to work around this by chainloading from a CD.

Pros: I cannot explain just how fast this drive really is. You definitely have to try it for yourself. There are hundreds of reviews and articles I have read through for months before finally taking the plunge. I can tell you that without a doubt, this is the single biggest upgrade you can do for your system.

Cons: Price and Capacity. Hopefully this will change quite soon. You really need to work harder to maintain low disk space with an 80GB drive.

Overall Review: I notice alot of users posting their reviews on how the bandwidth is low and the performance is terrible. Please do not listen to this nonsense. Most of these people are on terrible SATA controllers or they are not using the Intel Matrix Storage drivers. Please do us all a favor and do your research and know what you are talking about before buying and reviewing things.

Pros: Follow the Manufacturer Product Page link to the AnandTech review, which explains in depth why one should buy an Intel MLC drive or an SLC drive, not any other brand of MLC drive. Executive summary: Intel designed their own control circuits, avoiding the major MLC pitfalls. This drive is real-world fast.

Cons: Cost. 80 GB capacity requires rethinking disk use. Alas, people stubbornly impose the past on new technology, as in "my policy is to have 320 GB on my laptop, even if I'm always waiting for the disk to seek". The modern memory hierarchy is CPU cache, main memory, SSD drive, secondary hard disks. Would it be foolhardy to leave out L2 caches because one still needs main memory? Yes. It would be equally foolhardy to leave out an SSD because one still needs other storage.

Overall Review: The arrival of this SSD was the second biggest storage day of my life, after giving up floppies for a 5 MB external hard drive, and well ahead of the day I threw out my SCSI cables. This is a paradigm shift, no way I can go back. Silky, silent, instant disk responses are a bigger deal for day-to-day use than doubling one's processor speed. It will only get better as capacities increase and prices come down. But why wait?

Pros: Access time... System responsiveness significantly improved, even surfing the net. Virtually no waiting on "folder size calculation" when bringing up folder properties in Vista. Power on to interactive machine was very short. Drive stays very cool and does not have any exposed circuitry except for the power and data connectors. Absolutely silent!

Cons: Price (goes without saying); no power or data cables for a retail drive.

Overall Review: Imaged drive in Lenovo T61 T7500 w/ Vista Ultimate x86. Synchronous Test: Power on + Boot up + Immediate Login + Immediate Adobe Bridge CS3 (Once opened, then close before next app) + Adobe Photoshop CS3 (once opened, then stop timing). Immediate => As soon as the option is available (despite continued disk churn) *Only one application was running at a time in both tests Previous OEM 7200 rpm drive: 5.5 minutes through all steps (~2 minutes to login) X25-M: 1.25 minutes through all steps (~45s to login) Even at the price point, this is one of the best hardware upgrades to come along in a long time. From my reading and previous experience with raptors, If I didn't care about the noise, I would buy a velociraptor over this for a desktop because of the price and increased capacity since the performance is somewhat close. However, my preference would still lean towards getting this over a VR for the silence and overall speed boost from reduced latency.

Pros: Bought 2 of these drives (one for the wife, one for me). Got her drive installed with Win7x64 RC, and it installed in 15 minutes, and boots in about 20 seconds. Her applications load quickly, and other than a little stuttering here and there (sometimes in Outlook 2007, sometimes in IE8), the drive is fast and flawless.

Cons: My drive is fast, but is experiencing frequent "freezes", wherein mouse/keyboard I/O sticks (when I switch back to my old HDD, everything's fine). Also, on average after about 30-45 minutes of usage, the drive stops responding completely. No BSOD, the system just pauses indefinitely (left it for 45 minutes the other night, and it never recovered). I'm starting a support case with Intel to see if I can do some troubleshooting, but I'm not sure how bad or good the RMA process will be yet...

Overall Review: Speeds are great, but 50% failure rate for me is not. I'm just glad I got the bum drive so I don't have to hear about it from my better half... :)

Pros: In my aging Core2Duo desktop on an ASUS workstation board, this drive maintained a steady read rate of 238MBps. On my latop (D630), the drive has less stable reads of approximately 160MBps on average. The issue is most likely the relatively poor implementation of the SATA driver in the laptop rather than an issue with the drive. Insanely faster than the SanDisk SSD drive that originally shipped with the laptop (amazingly slow). Ironically, I had the first SanDisk drive die within 7 months!

Cons: None currently noticeable. The issue with the lowered speed in the a laptop is likely a laptop rather than a drive based issue.

Overall Review: I would have preferred to get the X25-E with the much faster SLC based chips.

Pros: I, like all others who bought this drive know full well that it would cost less than half of what I paid for it in less than 6 months. If for no other reason than Moore's Law states that a bigger, better HDD is destine to follow soon behind any current drive. That being said, I atleast did so for one reason. This Motha is as fast as it gets. 3 things that I have been impressed with are: 1. Decrease in Boot/Shutdown times; I can hit my power button and be fully loaded into Windows 7 (64 Bit) in less than 20 seconds. I click on "Shutdown" from my Start Menu, and it takes 4 seconds for my computer to be completely off. Wow 2. Install times; If you blink, you will miss it. Download iTunes, click install, and it is done in no time. It is amazing to watch. 3. Application launch/Game Load times; Click on MS Office 2003 and in less than 1 second, its ready to go. Open your favorite game, load your saved data and bam, your playing. (Even large RTS s

Overall Review: Buy this for bragging rights now or wait until later when the price drops but do buy this drive. Read all the data. You will see that this is the SSD to buy. Not the others. Oh, and if you do set up a Stripe RAID array, please e-mail me and let me know how fast it is.