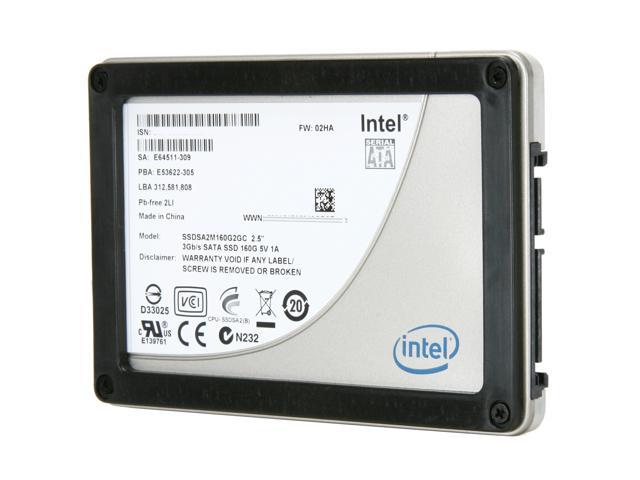 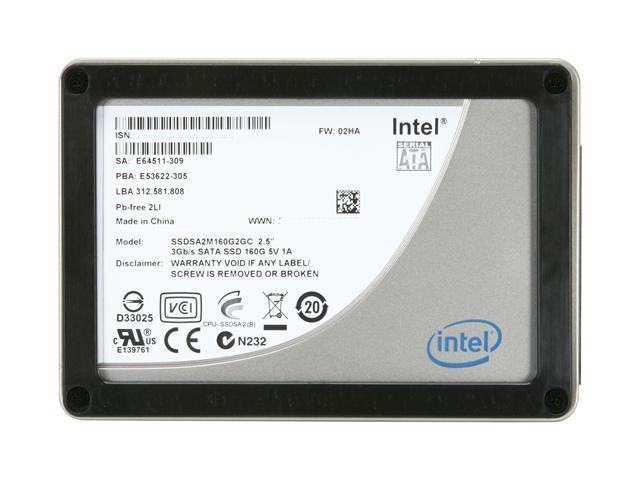 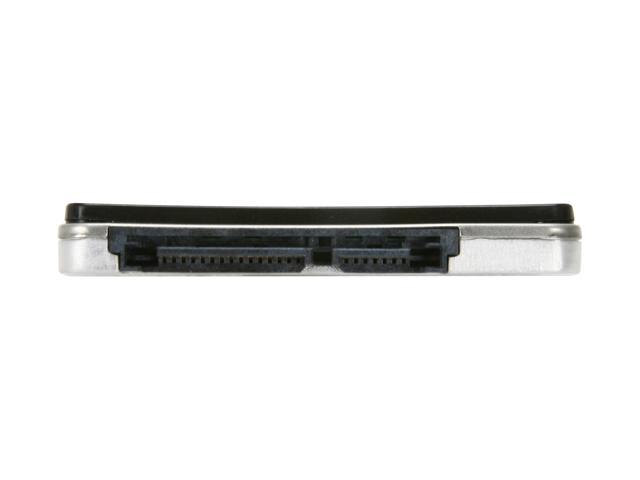 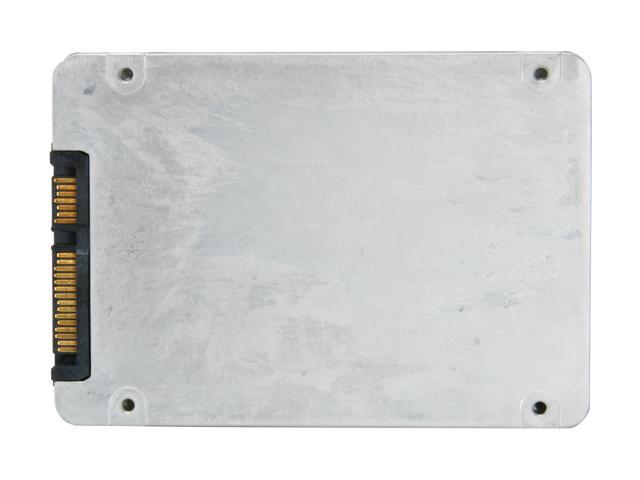 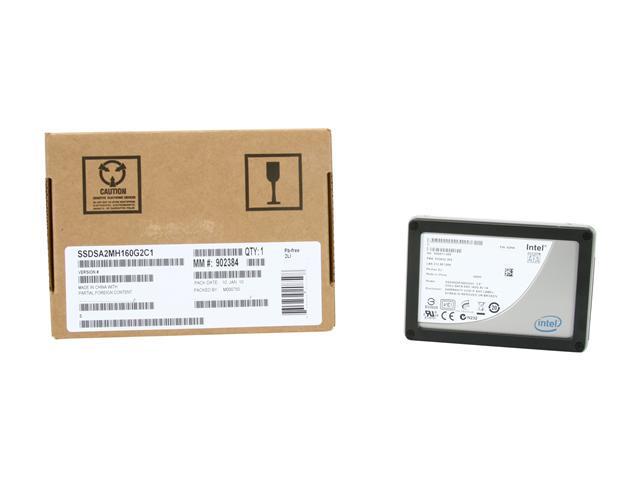 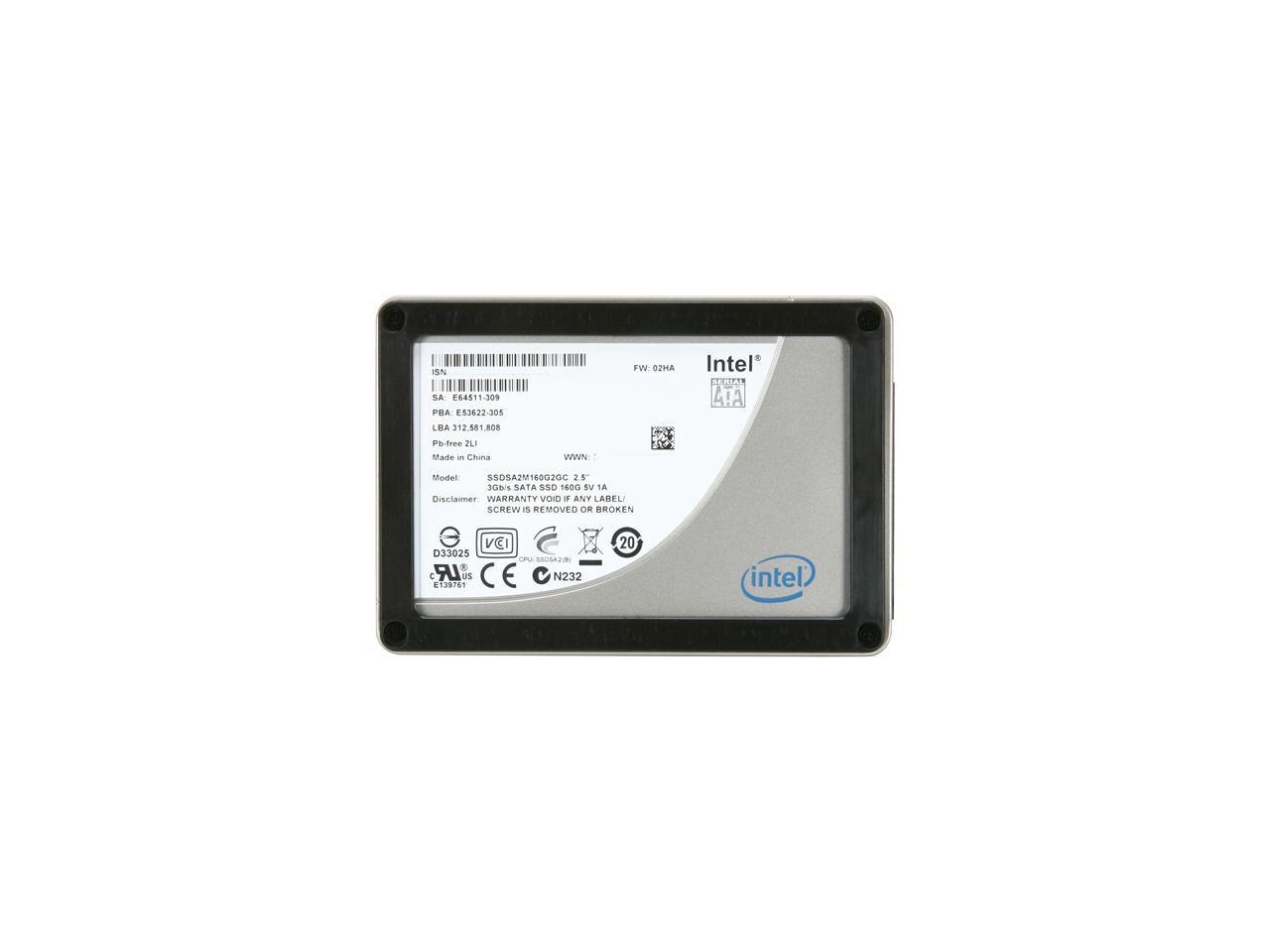 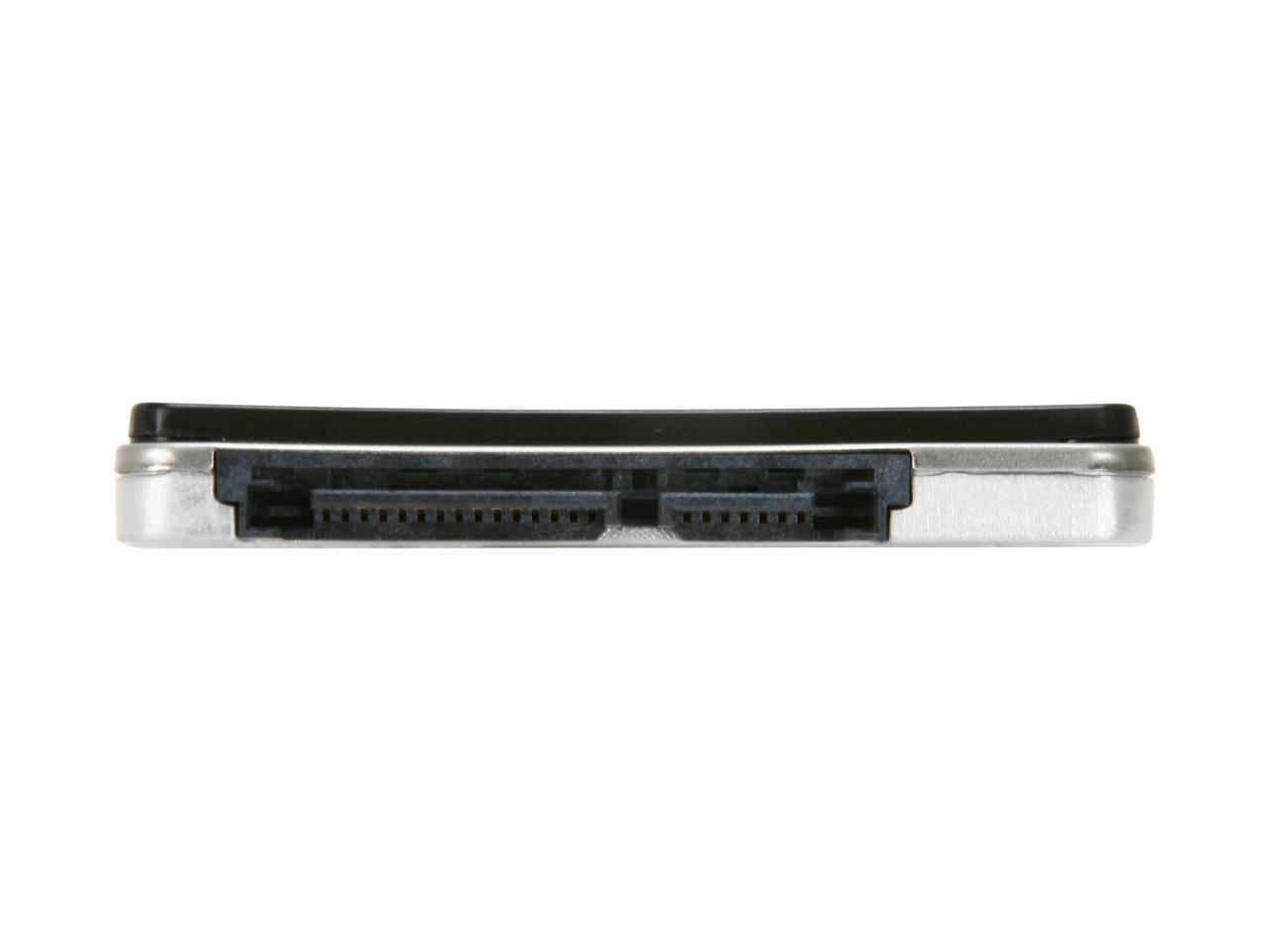 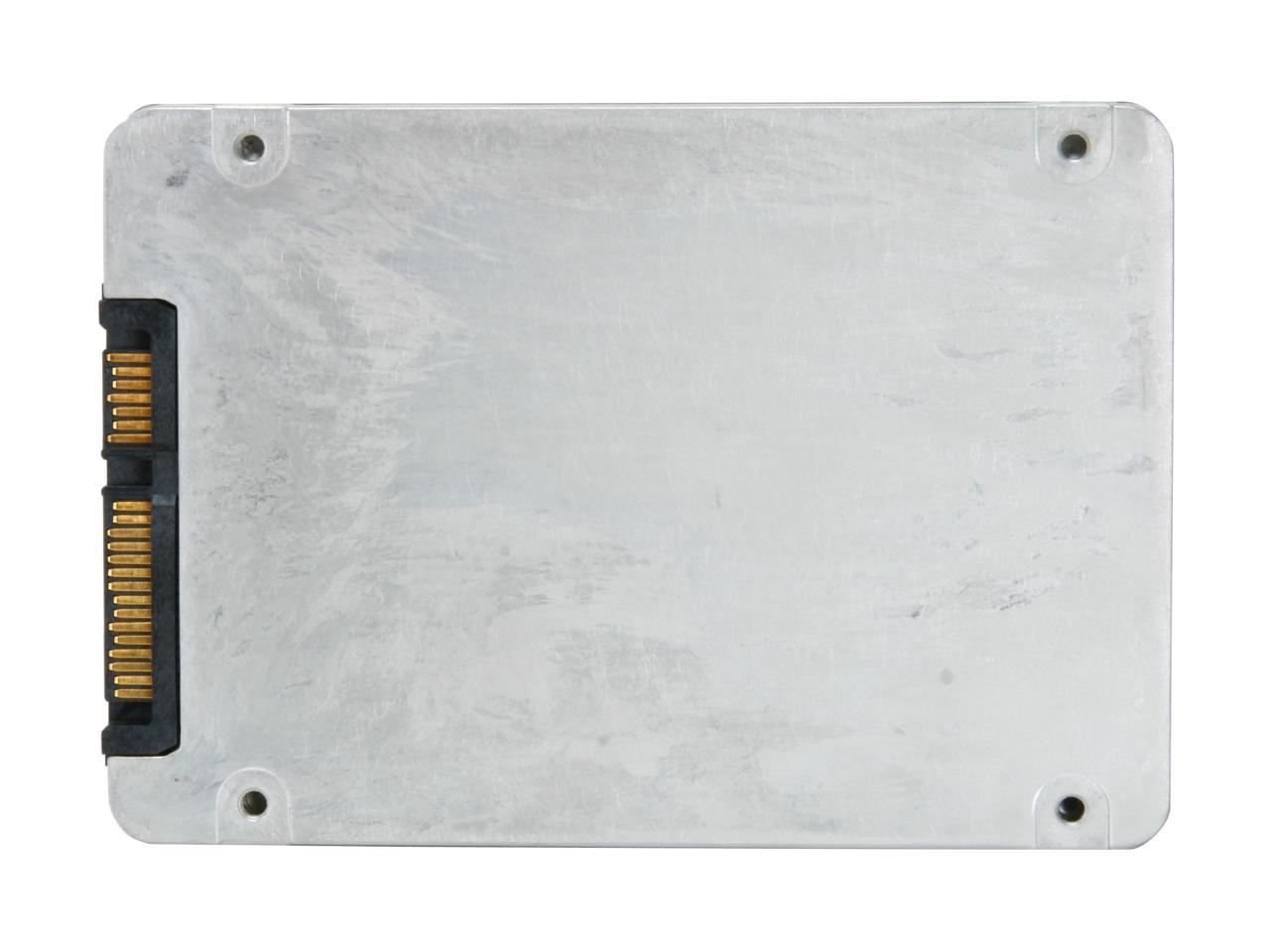 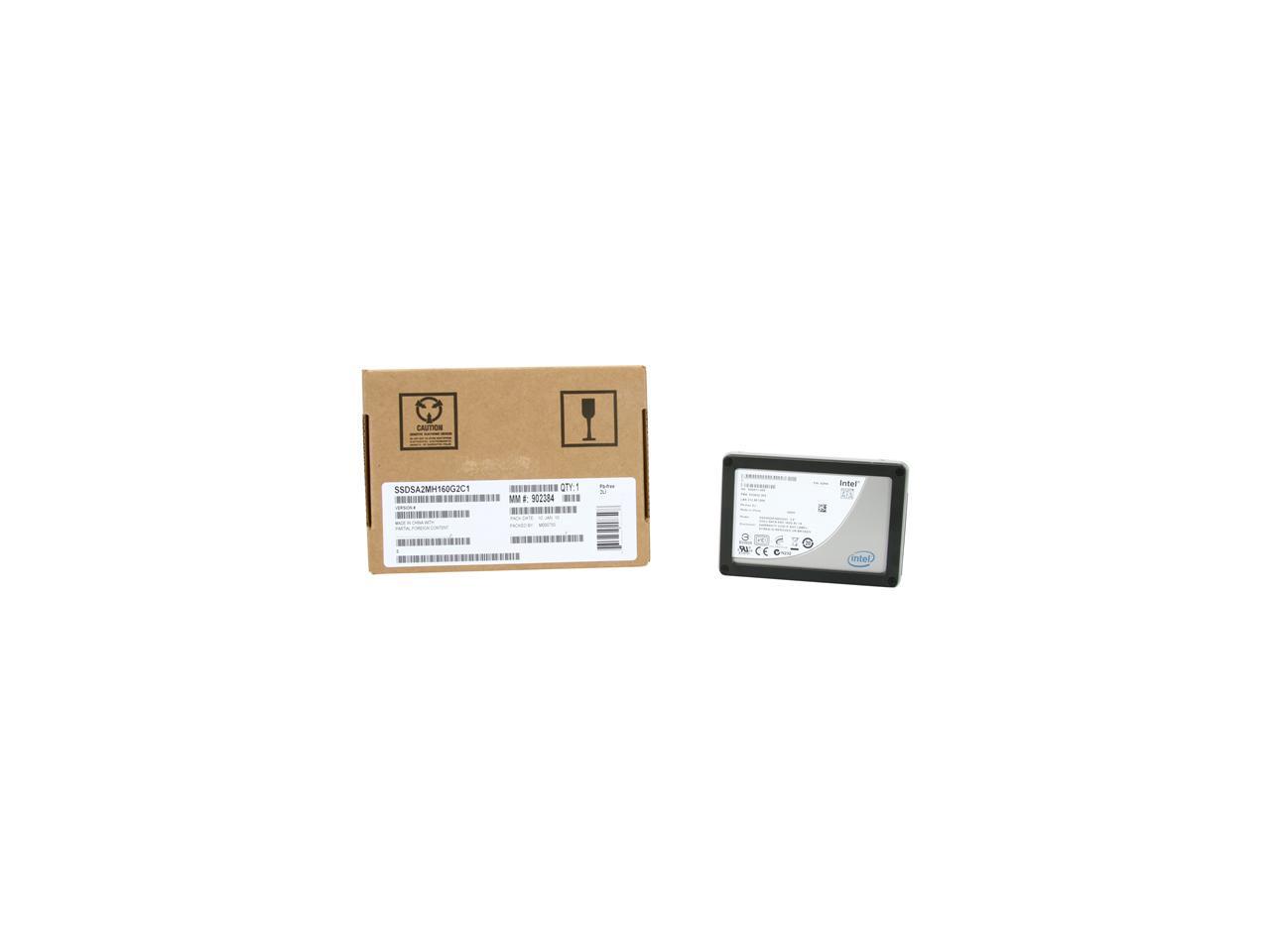 (87) Write a Review
OUT OF STOCK.
Overview
Specs
Reviews
Bring an extra level of performance and reliability to your PC with Intel's X-25M Solid State Drive. Unlike regular hard disks, the Intel solid-state drives have no moving parts, giving you a cool, rugged storage alternative. The lower power needs of the SSD translate to lighter notebooks with a longer battery life.
These innovative drives deliver outstanding performance with the latest-generation SATA interface and architecture with 10 parallel NAND flash channels and Native Command Queuing for up to 32 concurrent operations. Far faster than traditional drives with impressive reliability, these Intel drives perform better and are likely to last longer!
Keep ahead of your storage needs with Intel!

Learn more about the Intel SSDSA2M160G2XXX

Pros: Tiny. Silent. Fast. Clean install of Windows 7 all the way to the final boot was about 7 minutes.

Cons: None - except my rant about drive capacity!

Overall Review: Cannot believe the 'Hard drive industry' is still perpetuating the 'formatted capacity' especially with drives that are simply just RAM! This is a 150GB drive. Is it really that hard to divide by 1024?

Pros: Fast, fast, fast! More than a magnitude gain in speed. You won't notice this much when you're word processing or web browsing. But, if you do disk intense stuff like compiling applications as a software developer or rendering large videos, this will blow you away.

Pros: Kicked the stock drive from my macbook to the curb. This drive is faster across the board. Shopped around and picked this up with a price drop plus discount. Brought the drive to $2.59/GB. Battery lasts a little longer. I gained a little more performance after flashing the firmware.

Cons: I can't wait until I can buy at least 3 more of these for a raid 0 on my desktop.

Overall Review: I am still waiting for jet packs, hoverboards, and to hopefully avoid skynet. This will do for now.

Pros: Programs launch almost instantly. Windows starts much faster. Silent and runs cool. When Intel releases firmware with TRIM support it will eliminate the slowdown over time that has been a problem for SSD drives.

Cons: Price for this drive is high, especially with the shortage of drives and WIN7 launch. As always being an early adopter is costly.

Overall Review: I bought this drive as part of my upgrade to Windows 7 and am very happy with it. An SSD is one of the few upgrades you can do to a recent machine and see a big difference in performance. I would recommend getting a big RAID array for storage and loading your programs on the SSD to maximize a system.

Pros: - Significant performance increase even on older machine - No studdering like competitors drives - Works as system/boot drive -Thanks to the trim feature, it still feels/benches just like the day I bought it My boot time is less than half. Programs load anywhere from the same as before to about 1/10th the amount of time, depending upon what it is. This laptop was never this fast, even new. I'm not getting the rated speed, but I didn't expect to with this older machine. However, I was surprised about how much difference it made despite my hardware limitation. And my "old" drive wasn't a slouch either, a Seagate 7200.4 - 250GB. So if your on the fence because you have an older machine, just go for it. Yeah, you won't get the rated speed, but your machine will still feel night-and-day faster over what you have now.

Cons: - Not much documentation included or provided on the manufacturers site about how to get the most out of this product - The price is a bit steep. I'd have to say, it's barely worth the money. I spend a good deal of my time on a computer so it's worth it to me. But I'm also the kind of guy that puts a $10K 600HP engine in a $5K car, so maybe I'm nuts.

Overall Review: I got scammed by a competitors SSD a while back so I was hesitant to try one again. My worries are gone with this baby. I haven't experienced any of the SSD problems from before. I haven't done the partition realignment yet. Maybe I'll try it after it starts to feel slow again. :) I just disabled the swap file and all the windows indexing and file reorganizing for now. Honestly, the tweaks didn't make much difference, but I was worried about the life expectancy so I left them. This is installed on a Dell D820 with windows XP Pro. The Intel SSD toolbox works in XP and so far has taken care of the "trimming" with a manual execution about once a week. Even the auto trim only puts a task in your windows scheduler so you don't have to worry about something else running in your task tray, sucking up resources. +1 for Intel. FYI: I had to upgrade the firmware to the latest version as soon as I got it in order for the trim to work so expect to do a firmware upgrade.

Pros: Speed! This drive is super-fast, and that was the primary selling point. It is a significant improvement over ever previous boot-drive I have ever used.

Cons: The price is still relatively high, but I chose to make the purchase, and it is worth it in my system.

Overall Review: I downloaded the latest Intel drive utilities, which allow scheduling TRIM. Any advice on the ideal frequency for this will be handy, wherever I may find it...

Pros: This thing is FAST. Wow. Also, no more noise or vibration from my hard drive. My computer is almost completely silent. Read times are insane. Multitasking is also awesome. No more beachballs when changing tons of data in itunes, transferring files, and running a virtual machine at the same time.

Overall Review: Works really well in my uMBP 13. Totally worth the price. No noticeable improvement in battery life. No problems with firmware updates. The best computer upgrade I've ever purchased hands down. I will never go back to mechanical hard drives.

Pros: Installed Win7 Ultimate on this drive. No issues. LOAD TIMES - Saw a good improvement Load/Boot Times for OS and apps. PRICE - Caught it with a fantastic discount. GOOD VALUE - At the price it gives you the most bang for the buck IMO of the upgrades I was/am looking at. NEWEGG - All this comes with Newegg's "second-to-none" customer service.

Cons: I wasn't planning to make this purchase yet, but at the price Newegg offered, I had to do the deal.