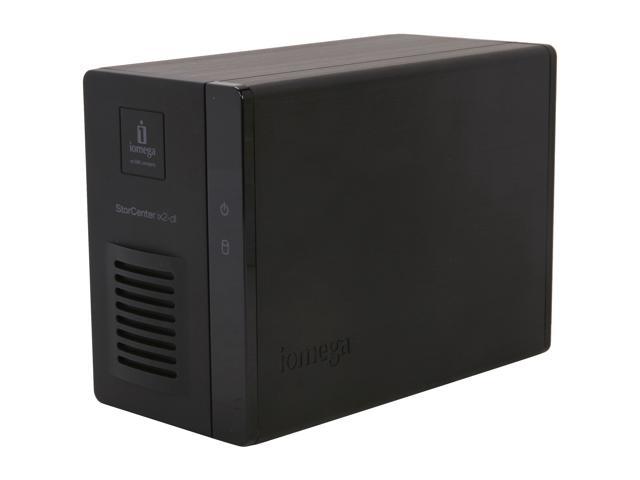 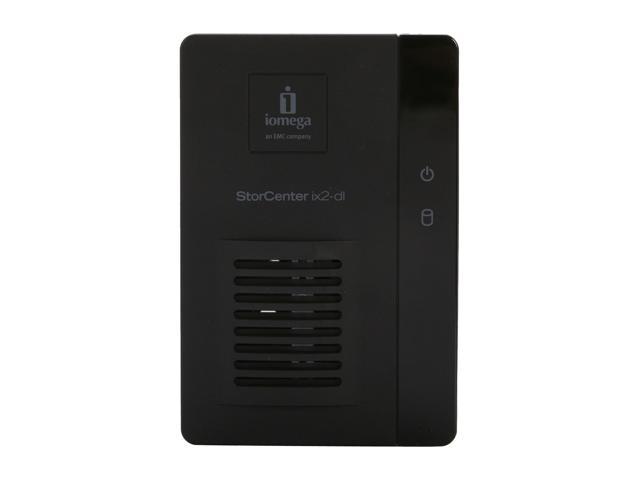 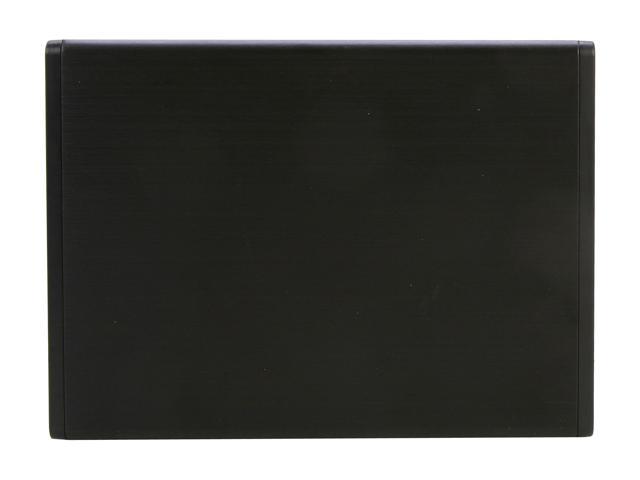 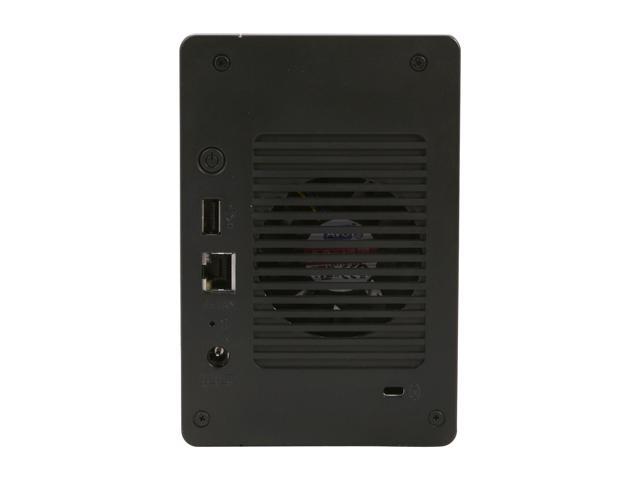 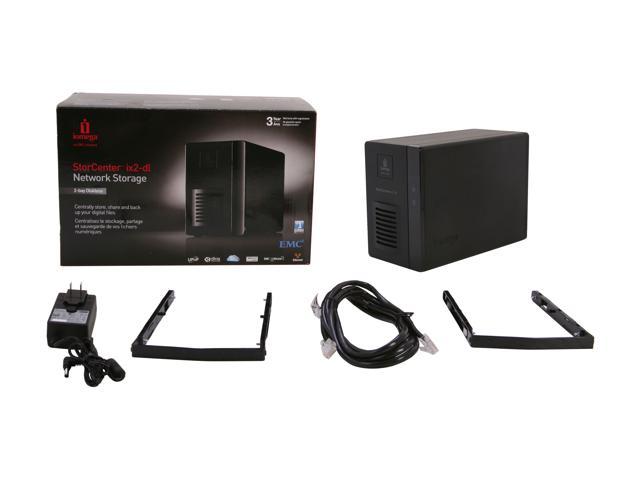 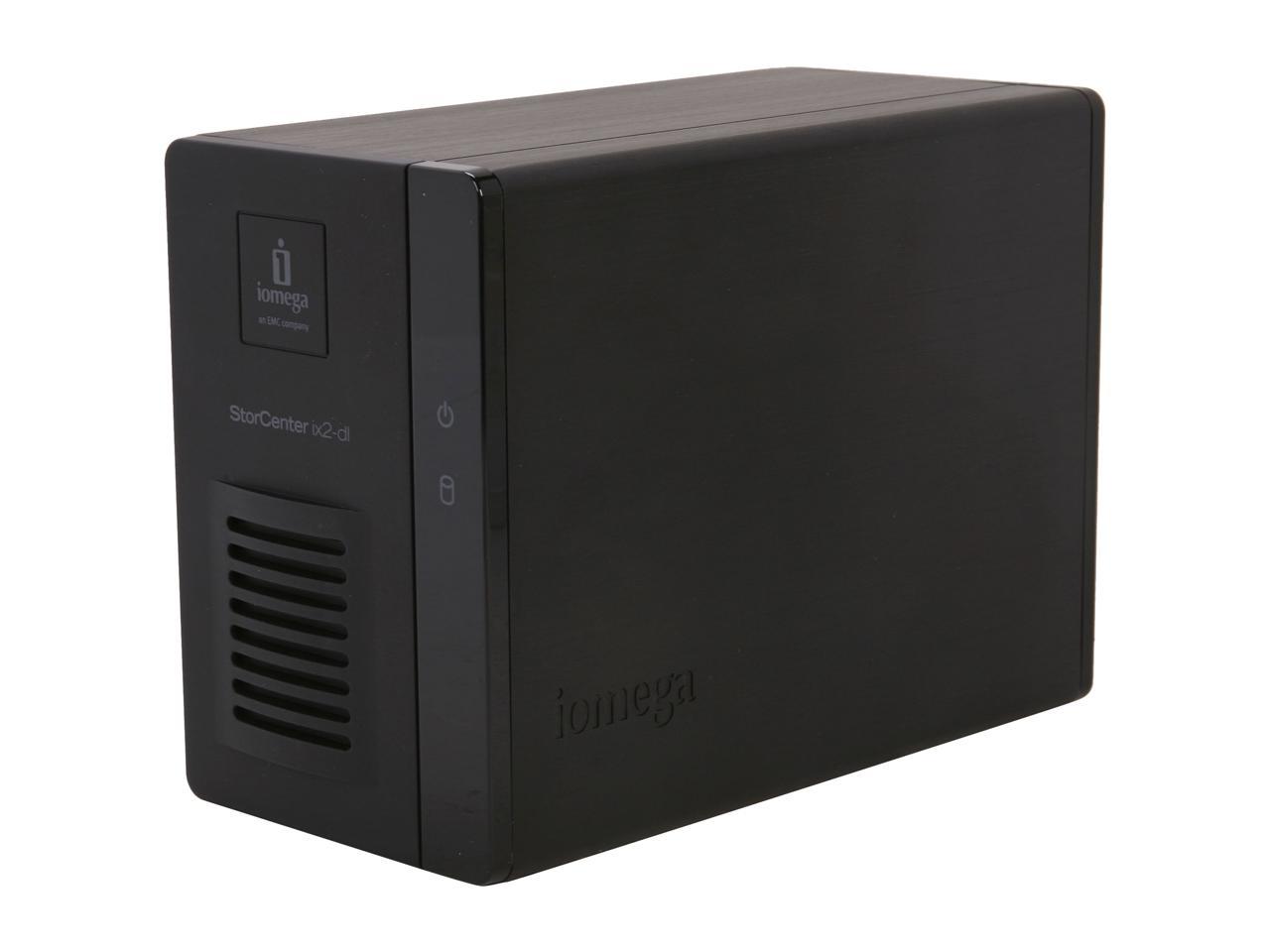 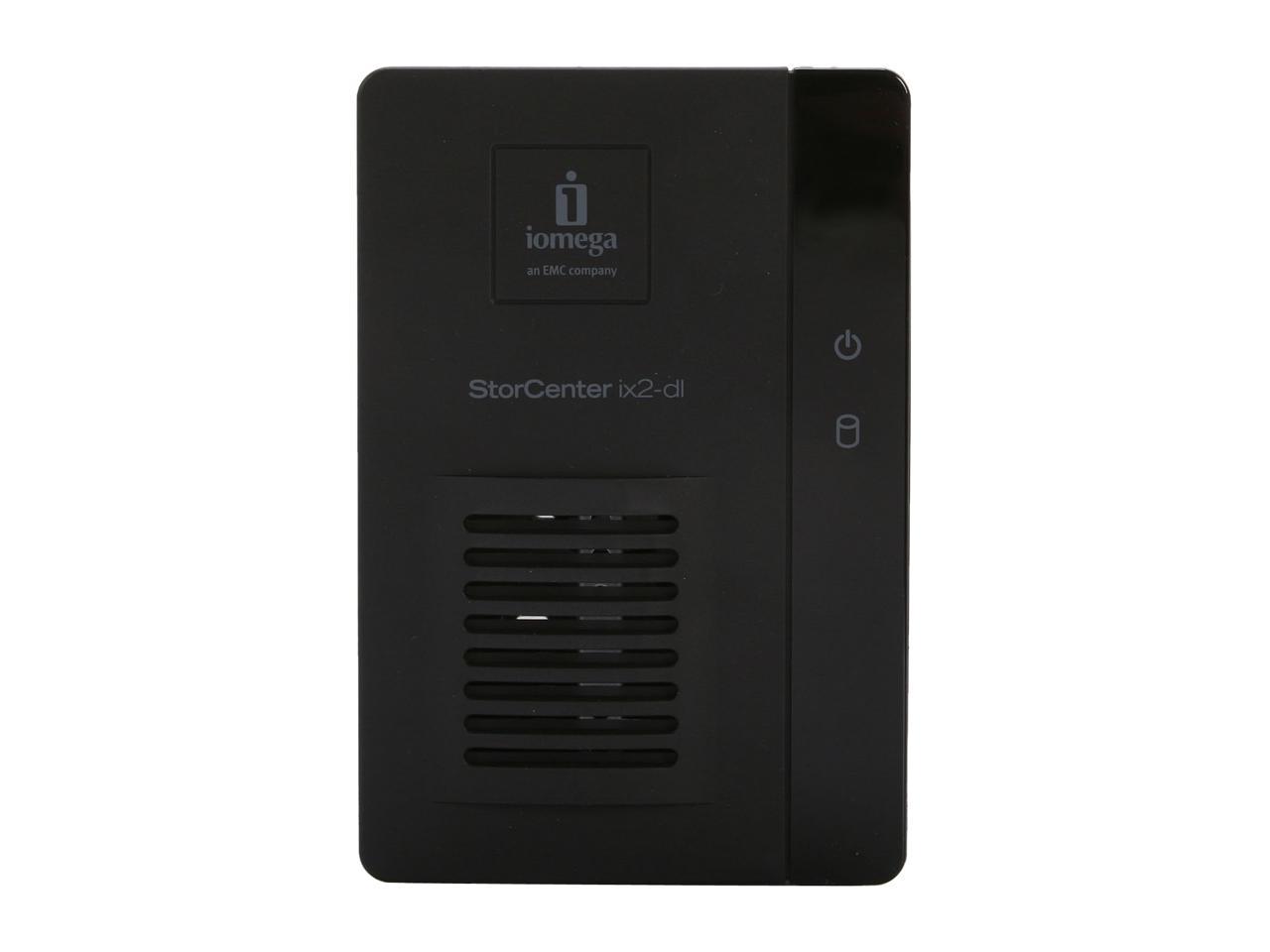 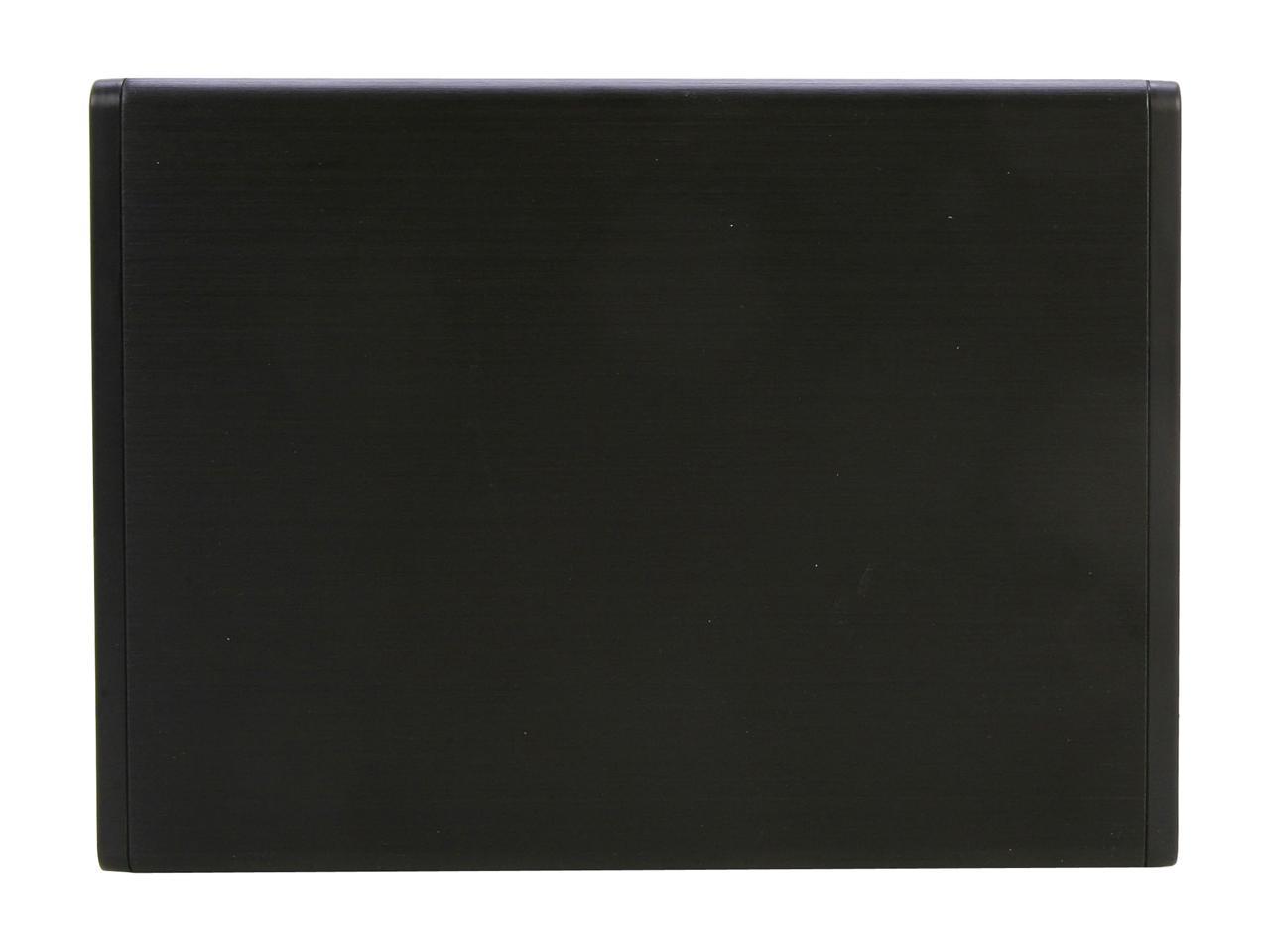 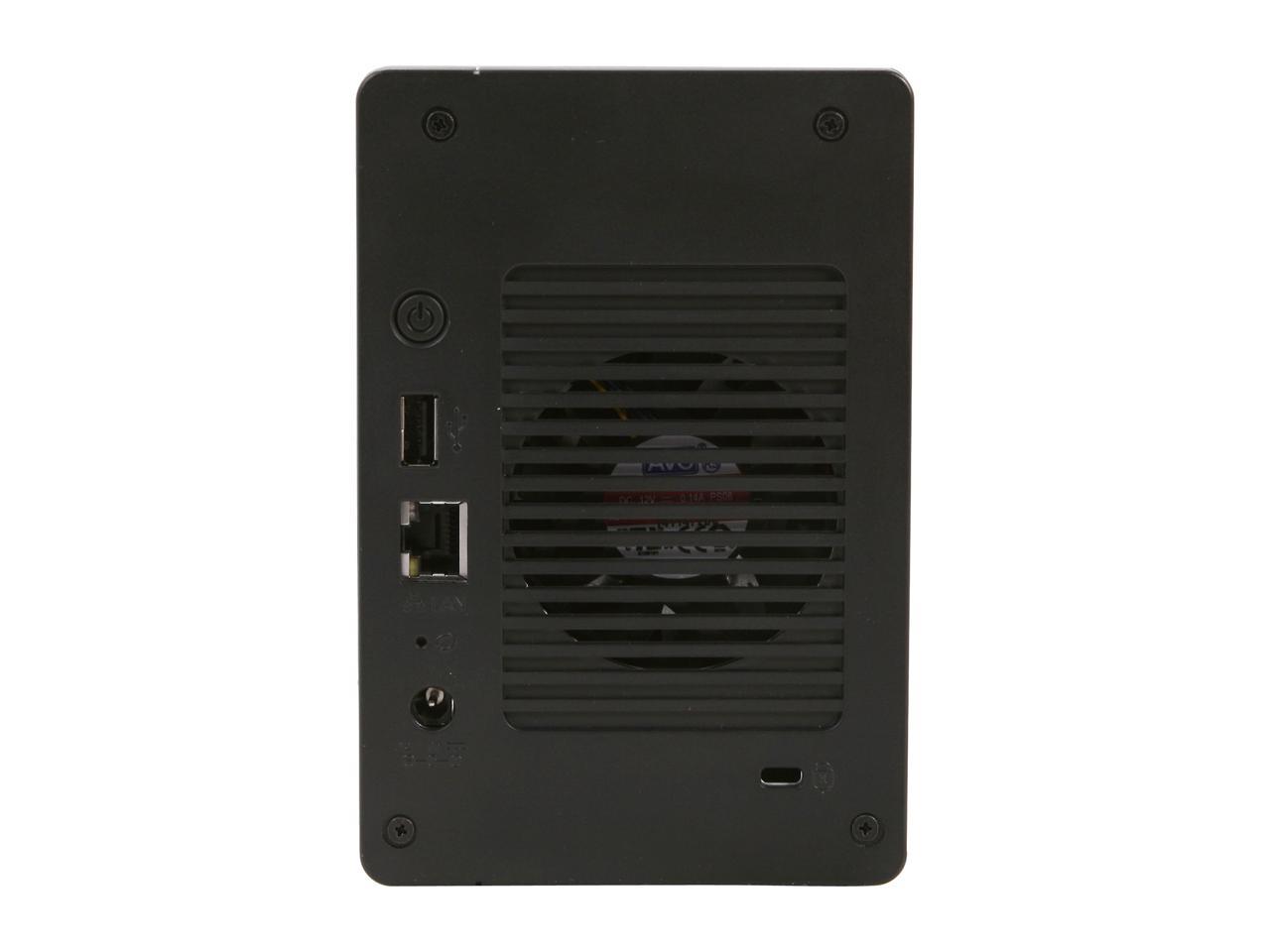 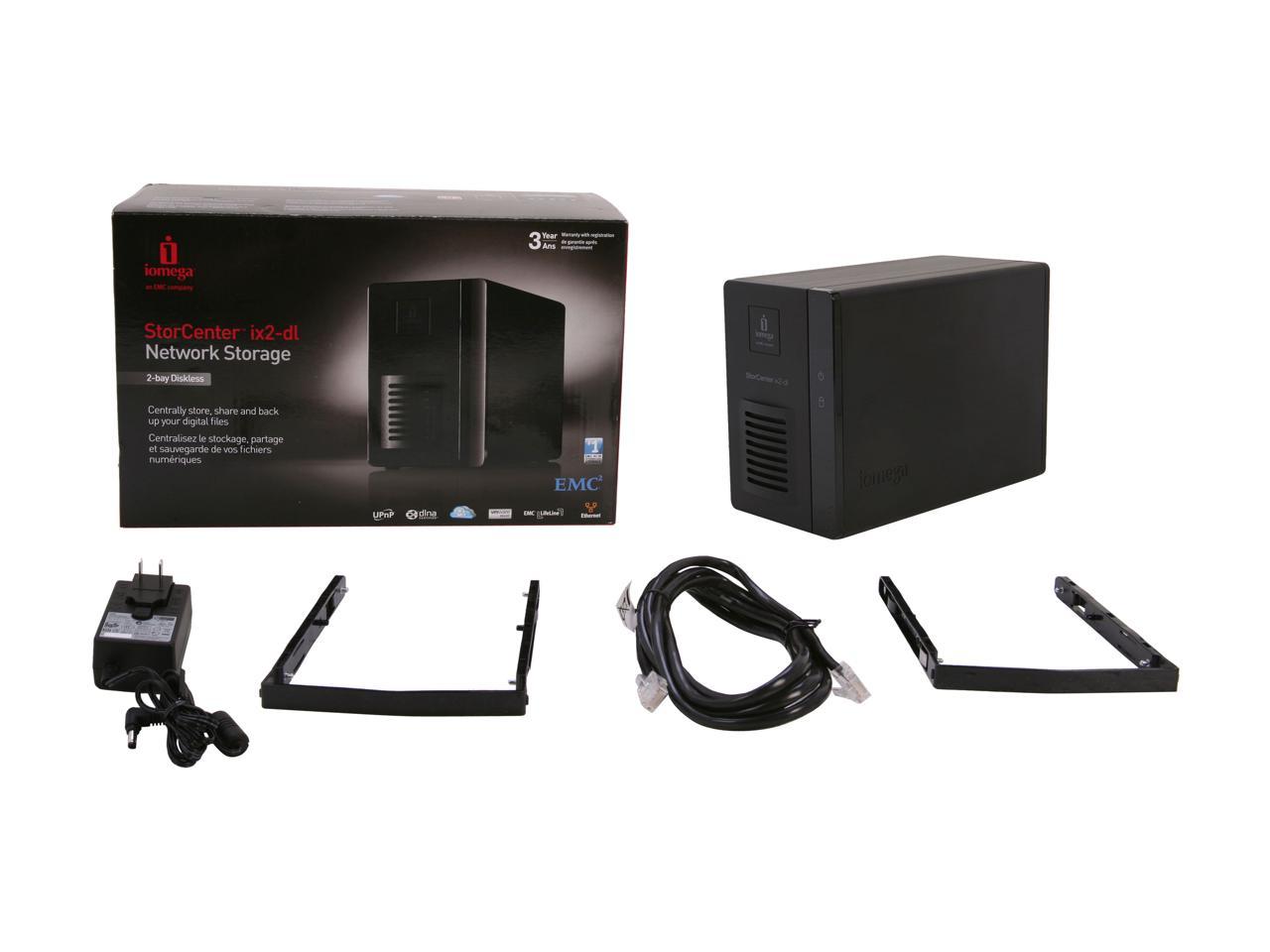 (26) Write a Review
OUT OF STOCK.
Overview
Specs
Reviews

Learn more about the Iomega Corp 35887

Pros: Great price, got this on sale for $80 after rebate. Performance looks to be about right for a NAS on the lower end of the price spectrum, I get about 30-40MB/s transfers to this NAS on Gigabit connection which is about the same as USB 2.0 transfer speeds. I was looking for something to throw some 1TB drives I wanted to move out of my main rig and simultaneously add storage capacity to some "thin" clients, portable, and handheld devices. This thing has been perfect so far! I currently have it set up for shared/networked drives for all of my main PCs. The set-up interface lets you easily configure, delete, and add shared network drives. I also set up an iSCSI drive for a laptop with a very small 90GB SSD. This allows me to record and watch Recorded TV directly from my Silicon Dust HD HomeRun to this NAS! This is all done through the included software and web-based set-up interface. Adding the drives to the swap bays is easy once you figure out how to open the enclosure. The sleds and drive snap-in is very sturdy and assuring when you insert the drives.

Cons: Documentation is pretty sparse, it's basically 1 step in 20 languages. Even opening the enclosure to add drives is not documented at all, but you just slide the front cover up to pop the front cover off. You *MUST* install and run the Iomega Storage Manager in order for your PC to recognize the NAS and its drives. The Storage Manager has to be running constantly (sits in taskbar tray). This may pose a problem for handheld devices or tablets, I'm not sure as I haven't tested that out yet. This thing is no frills, there's no fancy LED readout, just power and HDD activity. For what I paid it's great, but if you want all the bells and whistles and you're willing to pay for it, you may want to look into the pricer models. I had some issues getting the NAS detected when I reinserted the drives in a different configuration. One of the lights on the front was flickering red. Swapping the drives back fixed the issue. There must be some kind of configuration memory on the NAS that complains if things are changed. I'm sure there is some kind of reset protocol here but I didn't have to mess with it. This may limit hot-swappability however if you want to swap drives in and out of this thing.

Overall Review: This is my first foray into the world of NAS and I'm really pleased with the unit for the price. Maybe I'll find some feature down the road that will prompt me to shell out more for higher-end units, but for my first venture and $80 I'm very happy with this product. So far it does everything I need it to do, although I'm not sure how it will fare with tablet/mobile devices. I also took a chance and bought one for my brother in law and after messing with it for about a week, I feel much better about the purchase.

Pros: These were briefly on sale for $100. At that price, even with the modest performance numbers, there is a lot of potential uses for having more stuff available on the network, and we bought five (four to use plus a spare). These work with the Hitachi 4TB disks, so you can cram up to 8TB in a little package. Loaded with two 7200RPM drives, power draw is around 25 watts. In RAID1, read speeds seem to peak out in the area of 50MBytes/sec sequential, writes are an abysmal 20MBytes/sec, but for many applications, where speed isn't critical, these aren't bad. They do sport a rich feature set, at least given the price. The units seem to work with any 3.5" drives we've tried, from 80GB to 4TB, despite both extremes being well outside the supported sizes.

Cons: Relatively poor support by iomega, be prepared for frontline tech support to blame any problems you encounter on not using the iomega "approved" drives, and beware that you're dealing with outsourced tech support. We did run into some broken features, and eventually iomega coughed up a new firmware release (3.3.2.24208) that has to be downloaded from their support website. There are some things that still don't seem to work right, such as iSCSI Mutual CHAP, or AFP refusing to turn on even though the portal shows it on and the event log shows it on (rebooting the unit got it to actually turn on). The units do not work with 2.5" drives due to the design of the drive "caddy" which is actually just a three sided plastic thingy that clips onto your 3.5" drive.

Overall Review: I have some concerns about the power supply. It's a 12V/3A supply (about 36 watts peak), and it runs warm when running most any pair of drives we've tried. The unit seems to have been rushed out the door a bit. The shipping firmware refers to the unit as the "ix2-ng" and shows a 1U 4-drive rackmount unit in the status display, and there are lots of similar bits of polish that are missing. Some are fixed in 24208. Problem alerts seem to be exclusively via e-mail (or logging in via web). The front panel LED flashes too, but it seems to flash for a variety of not-really-a-problem things, like when it is initializing RAID1. For a hundred bucks, it is far more awesome and useful than your average external USB enclosure. For a hundred seventy bucks, it is probably not a great NAS, but not a complete waste of money.

Pros: Decent transfer rates for such a cheap little box! 2x3TB drives installed in the NAS -writes at roughly 48MBps -reads at abpit 98MBps (all on full gigabit network transferring 4.7TB of data)

Cons: Found that if i try to simultaneously copy large files to the NAS that the transfer rates combined drop below the usual single file at a time rate of ~48MBps down to a terrible 14BMps Might be just my unit but after finishing the 4.7TB data transfer to the NAS the disks were extremely hot, yet the fan on the NAS was only running at ~800rpm??? Tried calling 24/7 Iomega customer service to get the fan issue fixed but instead of getting help, i was on hold for 3.75 hours!!!!!

Overall Review: Lost an egg for fan issues, should lose another for terrible customer support!!!!

Pros: It worked for a year.

Overall Review: Was a great company. Now I would not buy even a wood pencil from them. Terrible customer support. Terrible is being nice. Service would get one egg, since that is the lowest I can go.

Cons: * No wake on LAN functionality, if you do a shutdown you'll have to press the power button to boot it back up * Absolutely no software is included! Iomega web site requires personal information disclosure to access operating software. * Reports home on a regular basis.

Overall Review: Got one for $79 after $50 rebate. Loaded with 2 3TB Western Digital Reds, appears to work fine in either RAID0 or RAID1. Probably overkill considering performance without jumbo frames, but got the reds on sale for the same price as the greens. Using RAID 1 SMB without jumbo frames: Sustained Writes 40MB/sec up to 48MB/sec Sustained Reads 64MB/sec up to 75MB/sec

Pros: Configured iSCSI for ESXi5.1 very easy !! For those of you looking for cheap iSCSI solution. Easy Web management tool.

Cons: little slow, when delete and recreate the luns.

Cons: Advertised and even documented on prominent blogs as supporting DLINK camera in the built-in surveillance application (EMC). Several blogs specifically state that iomega themselves sent the IX2 along with DLINK DSC-930 camera and when tested supposedly worked. I can report that iomega IX2 surveilance app does NOT work properly iomega's own forums are full of people who state they "gave up" trying to make it work. IX2 will show a DLINK DSC-930 camera in the surveilance app "live wall" but if you click to record it will only ever record ZERO byte files so is worthless for this purpose. Whether it ever worked when blogs were written (over a year ago) and a firmware update broke it, or the testers only ever tested the "live wall" thought it was working and never actually tested the recording function is unclear. It cost me buying multiple DLINK cameras for this purchase which I'm now stuck with past return period because Iomega support is so unresponsive and I really wanted this to work.

Overall Review: Iomega support is HORRIBLE. I literally opened a ticket a month ago and they have done NOTHING to resolve the issue except try to blame it on the "cable" i'm using (tried that) despite many others stating this problem exists in the forums (for about 8 months) and clearly if the live wall works (can watch it literally for a hour without interruption) but only the "record" function doesn't, it a software problem. Tried multiple cameras same model every version of their firmware - same result. Based purely on their support and how they treat their customers, I don't think I'll purchase from iomega/emc/lenovo again. I might initially be jumping to buy another right now based on even with this major feature broken it's not a bad unit otherwise, but the way as a brand new customer I have been completely treated like garbage with the "we already have your money, now go away" attitude when requesting support for a brand new iomega product purchase - I'll hold off purchasing another for now.

Pros: Was lured in with $80 price. Great performance and features for price. iSCSI to ESXi 5.1 a breeze. Purchased drives from recommended drive list - no problems there. You will not find a better feature set even at retail price. Have had it for 4 months and would highly recommend. If it dies tomorrow, I'll repost.

Cons: Not a fan of the slide show upon login... Realistic cons? None.

Overall Review: I would recommend someone who thinks the OS on a diskless NAS device is located on the hard drives themselves do a little more research before leaving poor feedback.